It’s strange how depressing the last day of a trip feels. We were to travel back from Dawar to Srinagar on this which meant that we were still in Gurez Valley and Kashmir. But still, when I woke up that morning, the feeling was as if I need to get ready and go to work.

I remember something that Shoaib said that morning and I kind of still remember it. As we were getting ready, he said “ab hua safar-e-vaapsi shuru” which was very true indeed. Though we had a day more left, our trip in a way was already over.

From here, we were just going to travel back to Srinagar via the same road that we took to get here. Then we would fly back to Delhi from there. So yes, in every way, we were now going to start our return journey home. But before that, there was still one more place left to visit.

The time we spent in Gurez Valley was possibly the best part of this entire trip. I reached there with no idea about the place and was charmed by its natural beauty. It is definitely a place that should be on the list of every tourist visiting Kashmir.

Like previous days, Lavish and I were the first ones to get up and stepped out in search of a cup of tea. We knew there was only one place where we could get it so early in the morning – the Army wet canteen. And that is where we went. 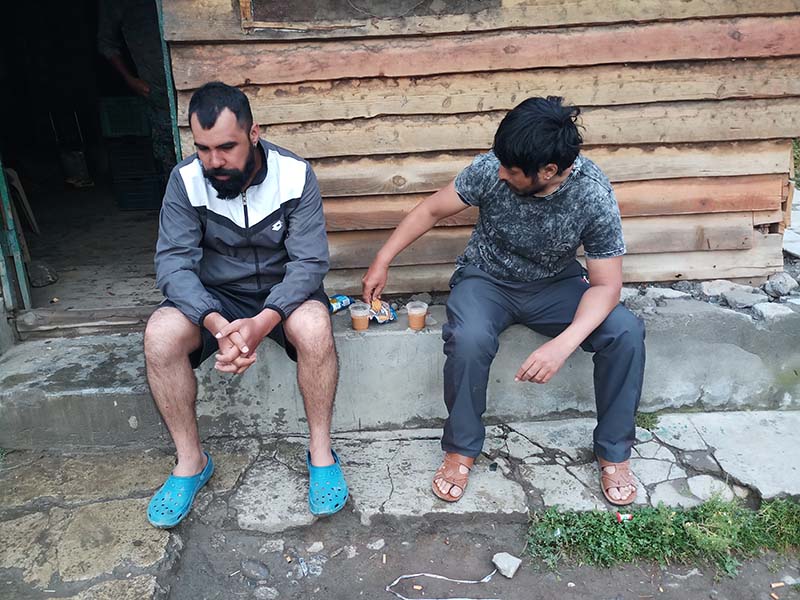 Neither of us was in a hurry that morning. Dawar to Srinagar was 6 hours at most and there were no other plans for the day.

So we took our time that morning, spending the last couple of hours leisurely in Gurez valley.

Shoaib had this crazy idea the previous day to cover Sonamarg while going back to Srinagar. He wanted to go to Sonamarg from Gurez, spend some time there, and then backtrack all the way to Srinagar.

This was doable but would have involved the entire day spent riding around on motorcycles. Considering the extremely bad roads, neither Lavish nor I were keen on doing it. So that plan was dumped in favor of a relaxed morning and easy start from Gurez valley.

There was just one place left to visit in Gurez valley, Habba Khatoon ka Chashma. I wasn’t even sure what it really was, to be honest. A few people said that it was a waterfall while some others said it was just a stream of water emerging from the mountain.

Whatever it was, we wanted to cover it as well while we were in Gurez.

We went back to the hotel, got Shoaib out of the bed, packed up our stuff and checked out. The best thing that I liked about Hotel Kaka Palace was that its owner, a guy called Younis Khan.

He tries really hard to promote tourism in Gurez valley. What he does is record a brief video of every guest that he caters to.

He will have his guests talk about their visit to Gurez, how they liked the place, and would they recommend it to others. Later, this video will be uploaded to an FB page of his hotel, as an encouragement to other tourists to visit Gurez.

I don’t know if it makes any difference. But no matter how small, it still is an effort to promote tourism to a rarely known part of our country which I really liked.

The same routine was followed with us as well. He had us stand in front of the camera on our bikes with his hotel in the backdrop and recorded a short video.

In the video, I talked about how beautiful and great Gurez valley is and how everyone visiting Kashmir should come this way. After the recording ceremony, we started on our way to Habba Khatoon ka Chashma which is barely 10 minutes of ride away from Dawar.

And what a great disappointment the so-called ‘Chashma’ turned out to be. It was far from being a waterfall. Just a little tiny stream of water coming out of the mountain. I will post a picture. 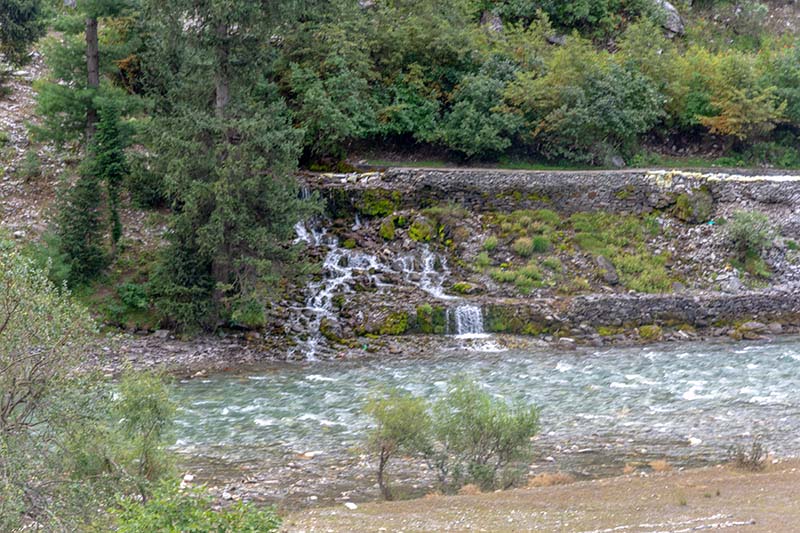 We decided to ride a little further. The road ended a couple of kilometers after at a small but beautiful village. Actually, the road did not end there but we were stopped at the check post. Civilians weren’t allowed to go any further that that check post. 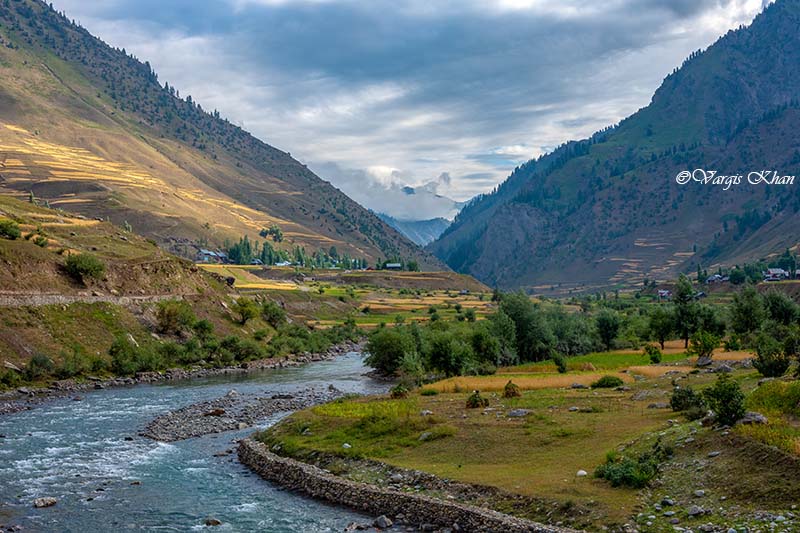 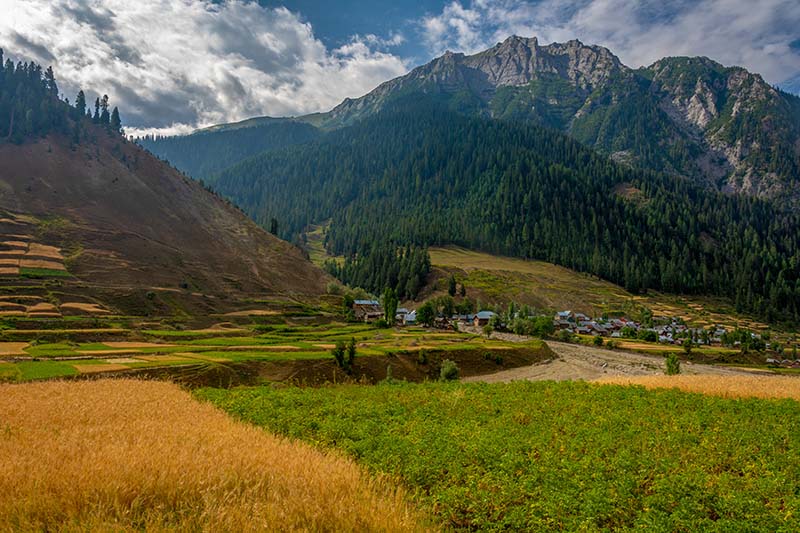 Lavish and Shoaib decided to play the old game of ‘make the stone float on the water’. 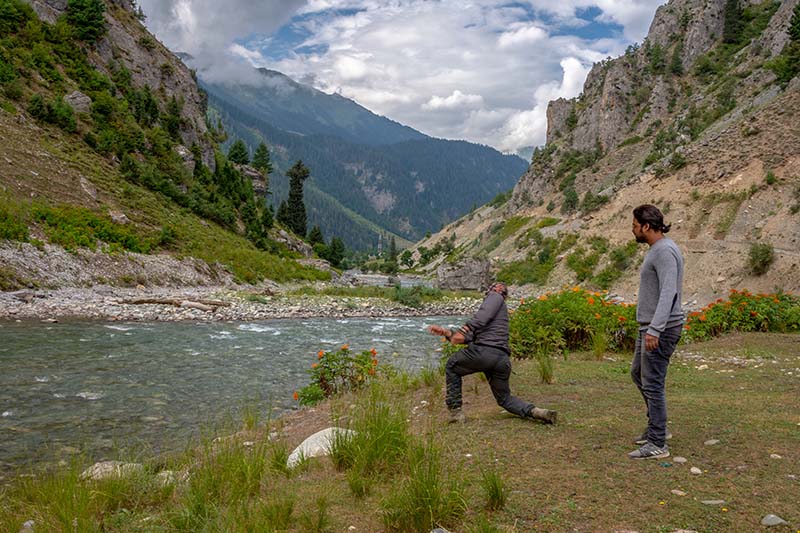 We roamed around and spent another hour in Gurez. Soon the clock showed about 10 AM and it was now time for us to start on our journey back. 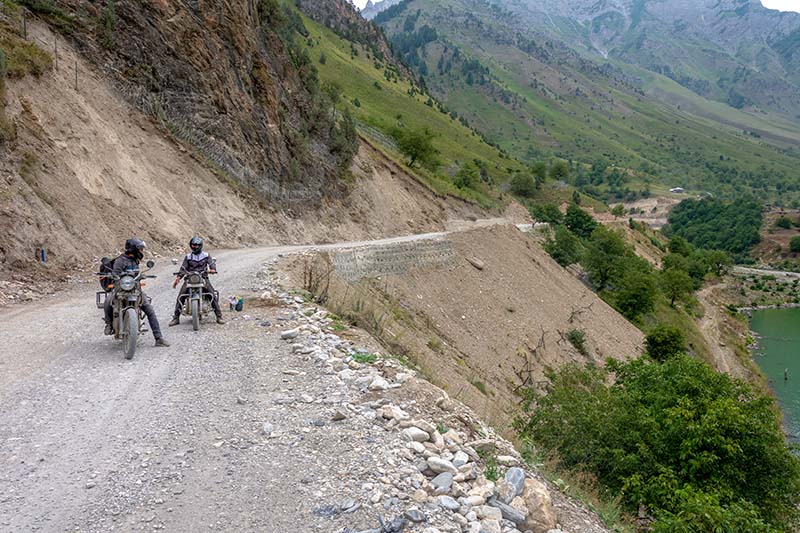 The Dam on the Kishenganga River 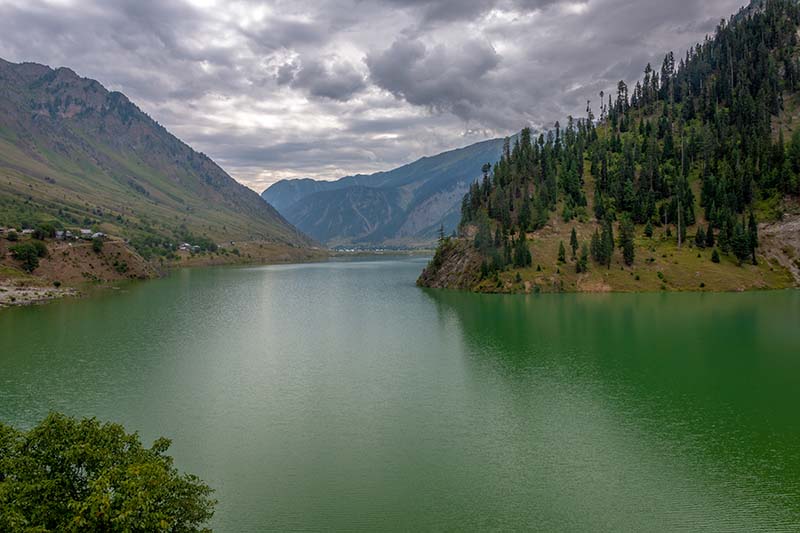 The return was eventless. We had already taken plenty of breaks at almost every spot that was worth stopping while going to Gurez Valley. So during the return trip, we kept our breaks to a bare minimum.

We stopped at Razdan Pass for some more pictures. 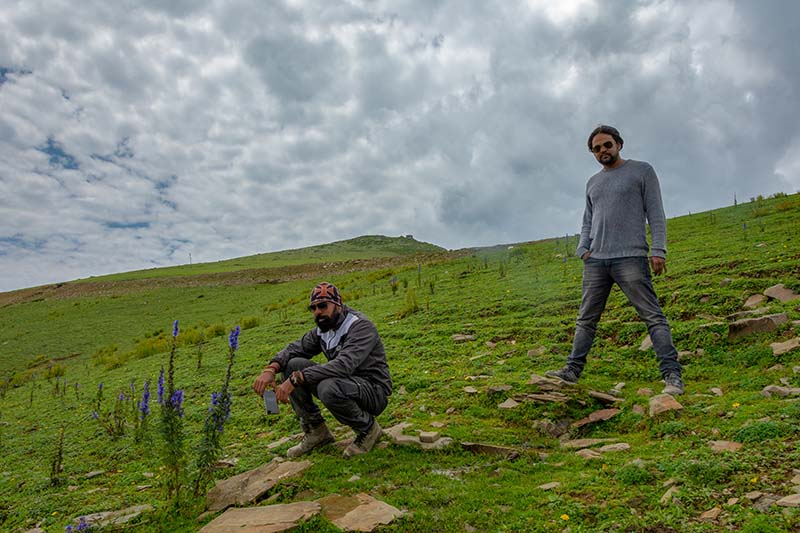 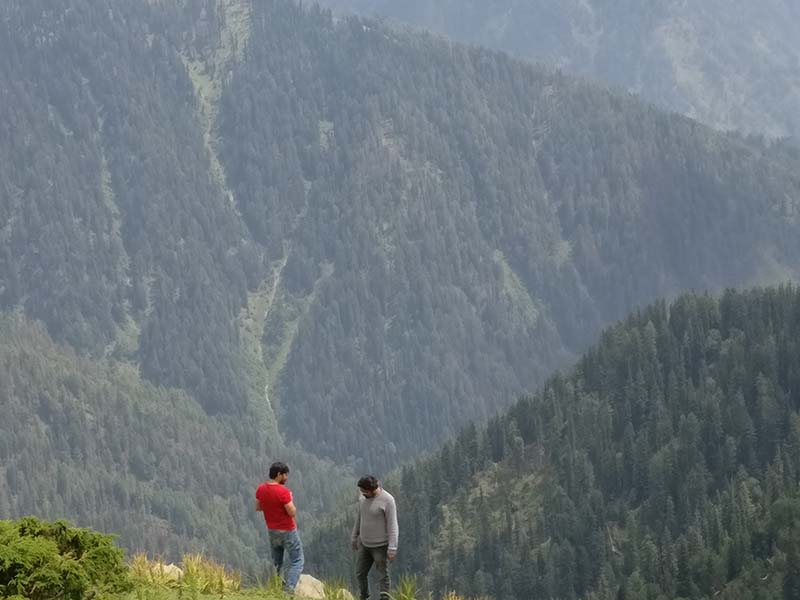 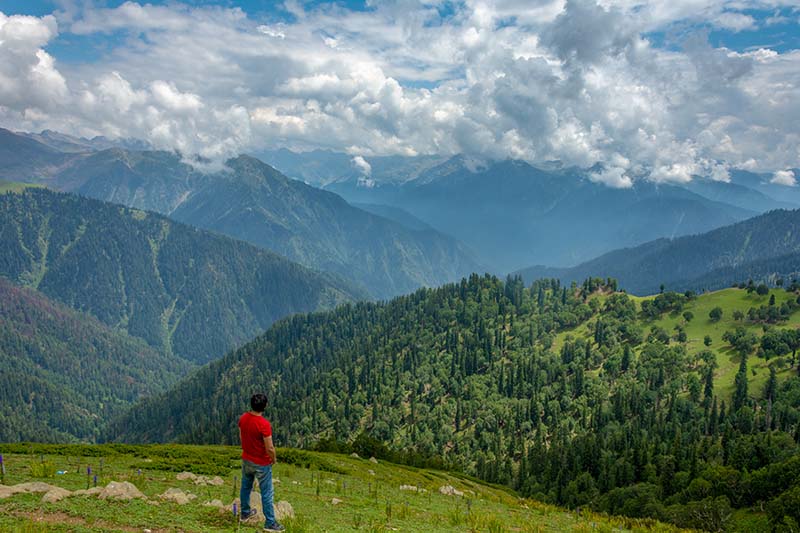 Dawar to Srinagar by Public Transport

I know we traveled on our bikes but I will add a little information on public transport as well. There is no direct bus or shared cab that you can board for Dawar to Srinagar. The journey will have to be broken into two parts.

From Dawar, you will first board a shared cab for Bandipora. This will cost Rs. 350 per person approximately.

From Bandipora, you will then board either a bus or a shared cab for Parimpora in Srinagar. This will cost Rs. 150 per person approximately.

We finally made it back to our hotel in Srinagar at around 4 PM. Our agenda that evening was to roam around Srinagar and enjoy some local places.

The first one on our list was Pari Mahal. I was told that it was one of the best places to catch a sunset view in Srinagar. So after resting for a while, that is where we first went to watch the sun go down. 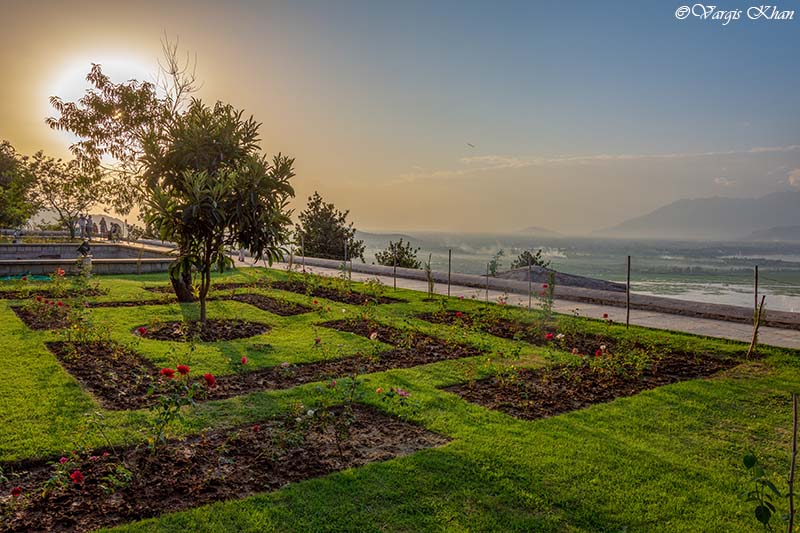 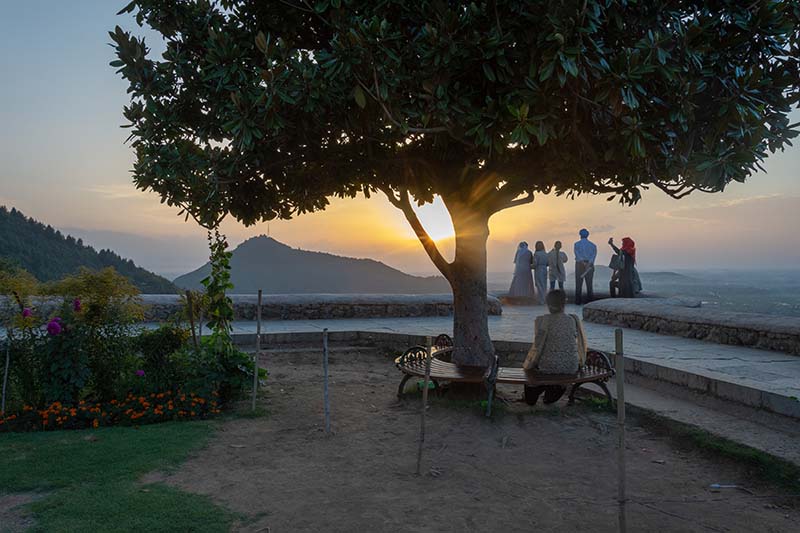 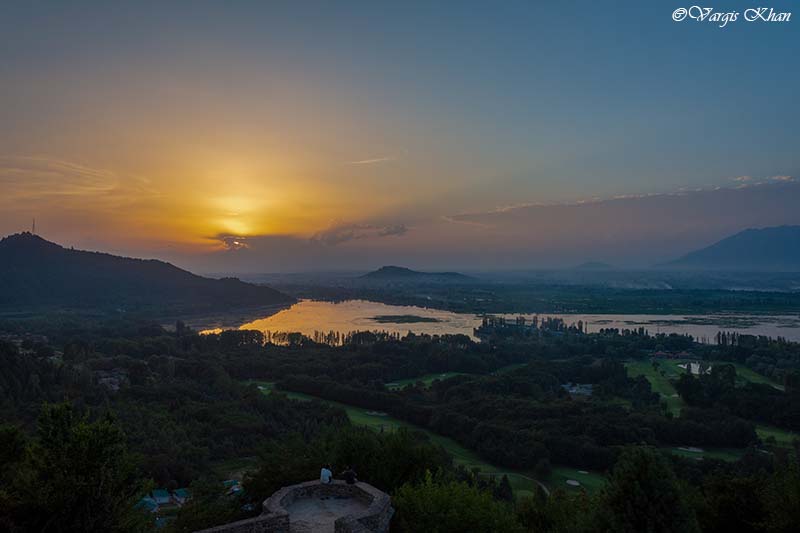 The next stop was Challi point near Dal Lake where we enjoyed some delicious Kababs. This place is like the central kabab point in the entire Srinagar. I will highly recommend eating out here in one of the evenings. 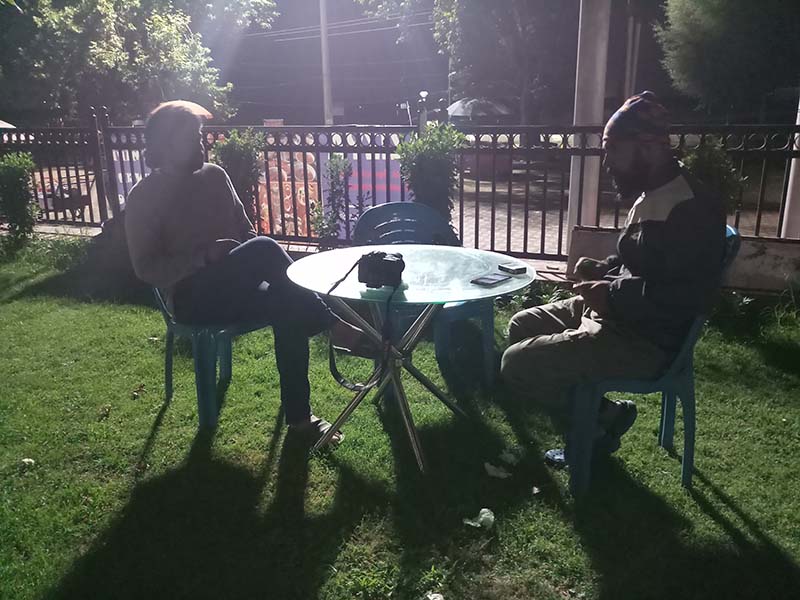 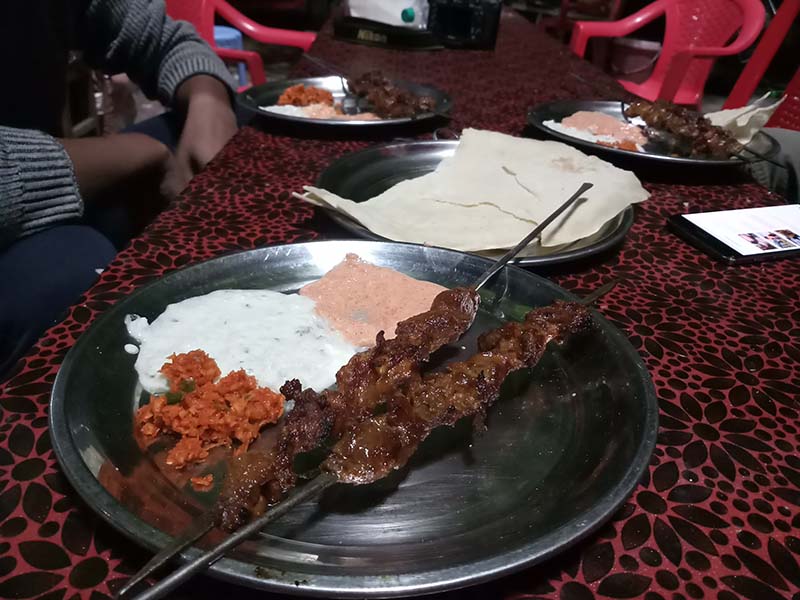 After that, we just rode around Dal Lake looking for something to buy, small souvenirs that we could bring back home. On the advice of a local,  we went to Dal Gate and bought some items from a pedlar there.

After shopping, we just sat around the lake for a little longer and arrived back at the hotel. This was finally going to be our last night in Srinagar and the end of a remarkable trip; one that was going to remain etched in memories forever.

Tomorrow, we were to catch our flight back home. With such sad thoughts, we went to sleep. The trip was fun and we already had our plans made for our next journey to Kashmir. Please click on the link above to read the last part of the travelogue.

I hope the travelogue, pictures, and information above on traveling from Dawar to Srinagar were of help. If you have any questions, please feel free to ask in the comments section below. You can also follow me on Instagram and chat with me live or subscribe to my YouTube channel and ask a question there.