Pahalgam to Srinagar – How to reach by Road, Bus, Taxi

With Baisaran Valley out of the picture, the plan now was to drive back from Pahalgam to Srinagar. For a while, we did actually consider driving straight to Gulmarg but then we decided to stick to the original plan and kept Srinagar as the destination.

I know we did not go to Baisaran Valley, but I will post a little information about it in the article below, in case you wanted to cover that.

With an exception of Aru Valley, our overall trip to Pahalgam was kind of a disappointing one. After being in Kashmir and seeing most of the tourist places there, Pahalgam to me I think was the least appealing one.

The feeling of disappointment I think was what made us skip Baisaran Valley entirely. In the hindsight, I think we should probably not have done that and might as well have covered Baisaran. But maybe that will be my reason to visit Pahalgam once again in the future, to visit that last place that I skipped.

So, if you were thinking to go to Baisaran, let me provide a few details on this place before I move on to talking about our journey from Pahalgam to Srinagar.

Baisaran Valley is basically a meadow, a large piece of flat land up in the hills, like many others all over Kashmir. It is located at a distance of about 6 kilometers from Pahalgam. There is no road to Baisaran Valley and you will either have to walk all the way or hire a pony.

The name Baisaran is for the small village located in that valley. There are a few houses up there and a mosque. The villagers are mostly pony owners and shepherds.

This entire distance of 6 kilometers is a trek. So a round trip to Baisaran Hills will mean trekking 12 kilometers.

Most of the tourists will go as far as Baisaran and return to Pahalgam the same day. This will take an entire day and is bound to tire you out to do anything else on that day.

If you wanted to hire a pony, which most people do, you can do so in Pahalgam and it will cost you about Rs. 2000 per person or more.

Since we were in no mood for trekking or even sitting on a pony, we decided to skip Baisaran and go straight to Srinagar. The total distance between Pahalgam and Srinagar is about 100 kilometers, depending on where you were staying in Srinagar.

While going to Pahalgam, we started early at 7 am. The entire 100 kilometers long journey to Pahalgam took just about 2.5 hours. On return though, we started from Pahalgam at around 11 am.

As a result, there was already a lot of traffic near Anantnag which increased the travel time.

We took our first break at a tea shop near Aishmuqam, the same place we stopped at the day before. 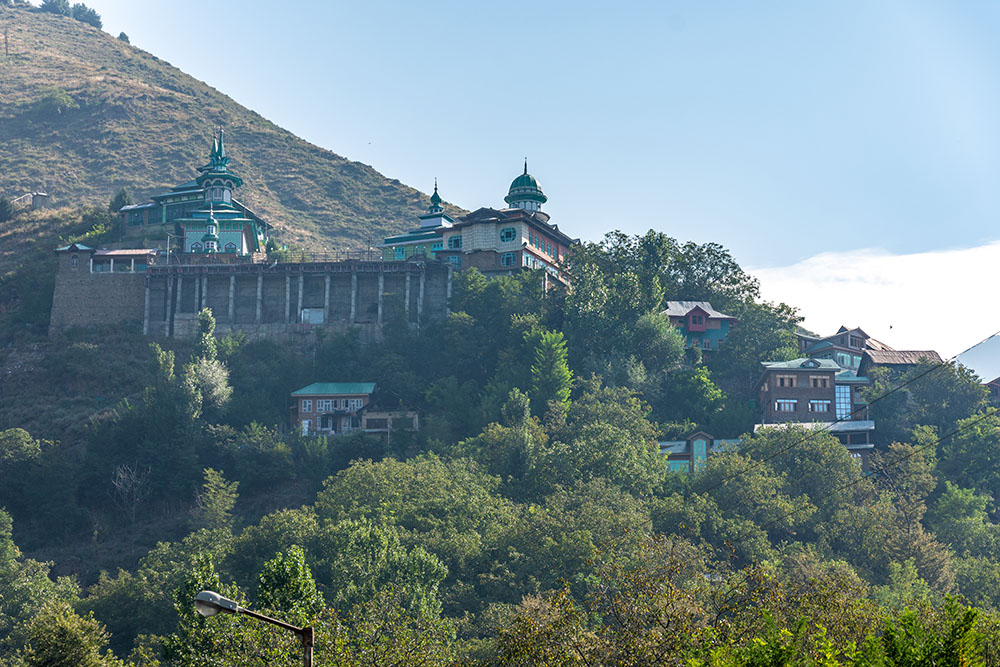 After that, the journey was non-stop and we reached our hotel near Dal Lake by 3 pm. That is when we realized that mobile data service in Kashmir was also back on, after being shut down for 4 days, since Thursday.

If you were not traveling by your personal vehicle, you can rent a private taxi from Pahalgam for Srinagar. Depending on the type of cab you chose, your negotiation skills, and the time of travel, a cab for this journey will typically cost anywhere between Rs. 2000 to Rs. 2500.

The direct bus between Srinagar and Pahalgam remains available only during the Amarnath Yatra. For the rest of the year, the journey must be broken into two parts.

From Pahalgam, you will have to first board the daily bus for Anantnag. From Anantnag then, you will then have to look for either a bus or a shared cab for Srinagar that will drop you near Dal Gate.

The taxi fare for a drop at the airport will remain the same, Rs. 2500 approximately. If you were traveling by bus or shared taxi though, the journey will become tricky.

The bus or shared cab you will board from Anantnag will drop you near Dal Lake or somewhere on the way. From there, you will have to look for another cab for the airport.

Coming back to the story, we reached our hotel at around 3 pm and stayed there for the next 2 hours. The sun was very harsh and the weather hot. So going anywhere for sightseeing was not really an option until evening.

At around 5 pm, we decided to go to Astanmarg. It is a viewpoint about 11 kilometers from Dal Lake and offers an amazing view of the entire Srinagar City, its surrounding hills, and Dal Lake. To read more, take a look at Astanmarg – One of the Best Viewpoints of Srinagar.

Maddy and I had already been to Astanmarg once after we arrived in Srinagar. We then tried going there again last Friday after Shoaib and Gunjit arrived.

But at that time, internet services in Kashmir were not working, including the mobile data. Since there was no Google Maps to follow, we could not find the way to Astanmarg. We asked a few people but got confusing answers.

So after driving around for about 30 minutes, we gave up and returned. But today, mobile data was working and we were easily able to find our way to the Astanmarg viewpoint. 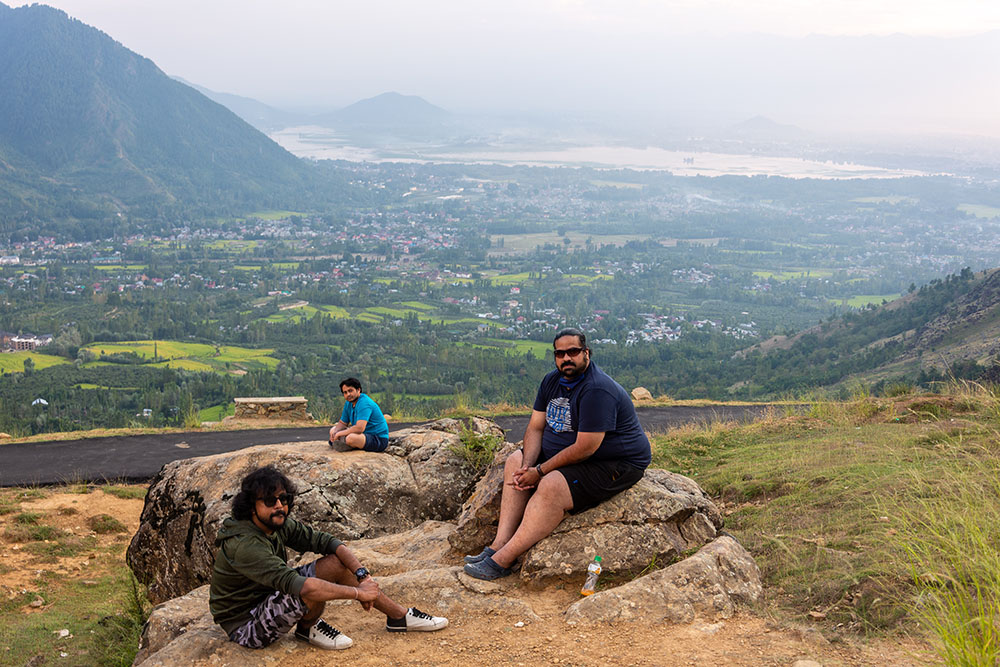 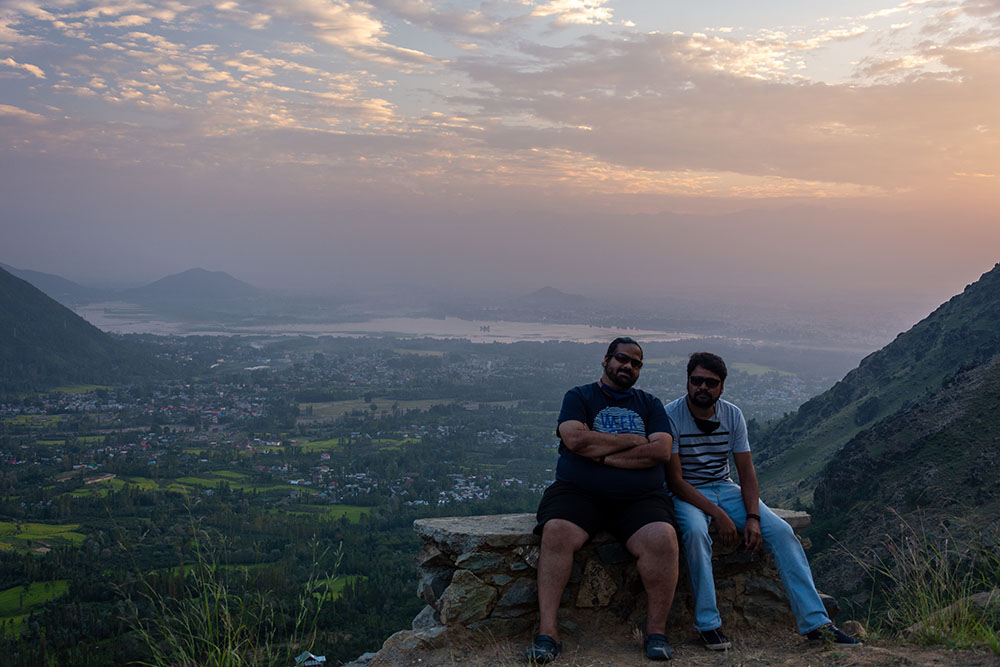 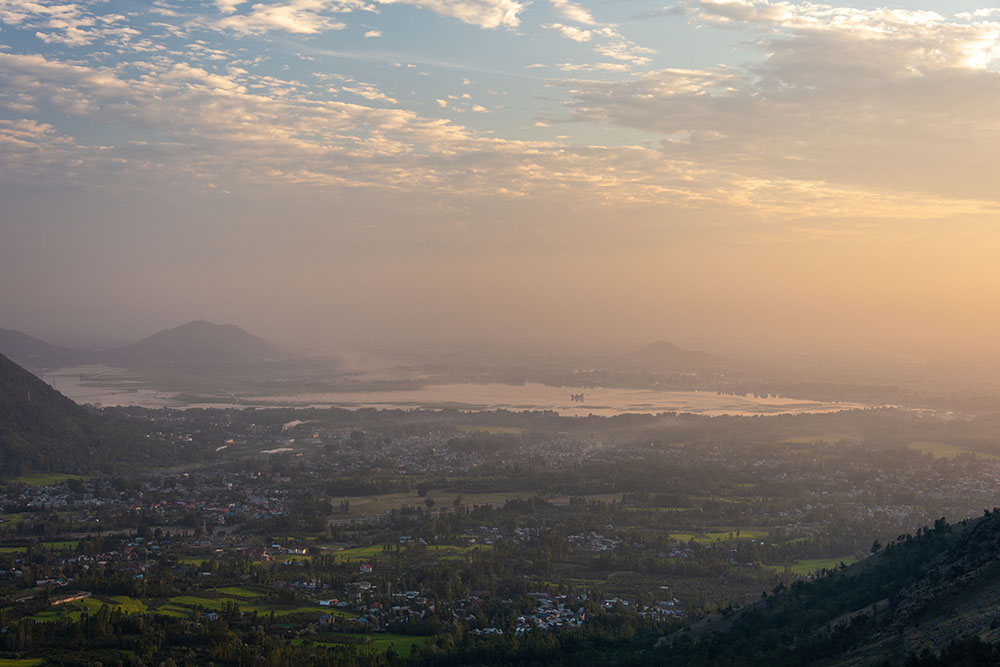 We spent about an hour up there, sitting around, talking, clicking pictures, and returned only after sunset. Not much happened after that. We had dinner at the hotel only and called it a day at around 10 pm.

The plan for tomorrow was to drive to Gulmarg. Please click on the link above to continue reading the next part of the travelogue.

I hope the travelogue, pictures, and information on traveling from Pahalgam to Srinagar were of help. If you have any questions, please feel free to ask in the comments section below. You can also follow me on Instagram and chat with me live or subscribe to my YouTube channel and ask a question there.