The Shankaracharya Temple is a temple dedicated to Lord Shiva and located in the city of Srinagar. It sits on the top of a hill at an altitude of 1,000 feet (300 meters) above the valley floor, overlooking Dal Lake and its surrounding city. The road from Dal Lake to Shankaracharya temple is a 5 kilometers long uphill drive that starts near Dal Gate.

The temple is also known as Jyeshteshwara Temple and is an ancient shrine, considered to be as old as 200 BCE. We visited the temple during a recent trip to Kashmir.

Bringing a camera along is not allowed inside the temple premises. We in fact had to leave our cellphones out as well. Hence, I could only click pictures of the route that one takes to drive to the temple from Dal Lake.

It is a place of high religious importance and also offers an outstanding view of the valley around it. Even for someone who is not religiously inclined, a visit to the temple is highly advised. It is hardly a 15 minutes drive from Dal Gate and can be incorporated with your trip to Dal Lake.

The temple is named after Adi Shankara who is said to have visited here during his lifetime. The Shrine is believed to be as old as 200 BCE but the current temple structure probably dates to the 9th century AD.

The temple sits on the top of solid rock, supported by a 20-foot-tall octagonal base. The road leading to the temple by built by the government in the year 1973.

It was a Monday and our second day in Srinagar. We had reached the city from Delhi via Jammu and Mughal Road on Saturday.

Our first day in the city, a Sunday was spent driving around the town enjoying the local food, and a visit to Astanmarg in the evening. On the second day, Monday, a trip to Shankaracharya Temple was planned.

It was quite late by the time we started from our hotel near Shalimar Bagh. The sun was already up in the sky and it was surprisingly hot for Srinagar in September.

I did a little reading about the temple before leaving the hotel. That is when I found out that the cameras were not allowed inside the temple premises. I still brought my DLSR and GoPro along hoping to at least get a picture of the temple from outside.

I had really no idea where the temple was located in Srinagar. Google Maps was turned on and it took us about 20 minutes to reach Dal Lake. A couple of wrong turns and U-Turns later, we located the uphill road to Shankaracharya temple and turned on it.

As soon as we started driving up, we reached the first security check hardly 200 meters later. Our car was thoroughly checked and entries were made in the register of our names, after verifying it with our Aadhar Cards.

The distance from Dal Lake to the temple is about 5 km and it is an uphill drive all the way. As you gain altitude, you start getting a view of the entire Srinagar City on both sides as well as the Dal Lake.

The problem is that there is heavy vegetation and tall trees on both sides of the road. So, getting a clear view or a spot to click pictures from will be hard to find. 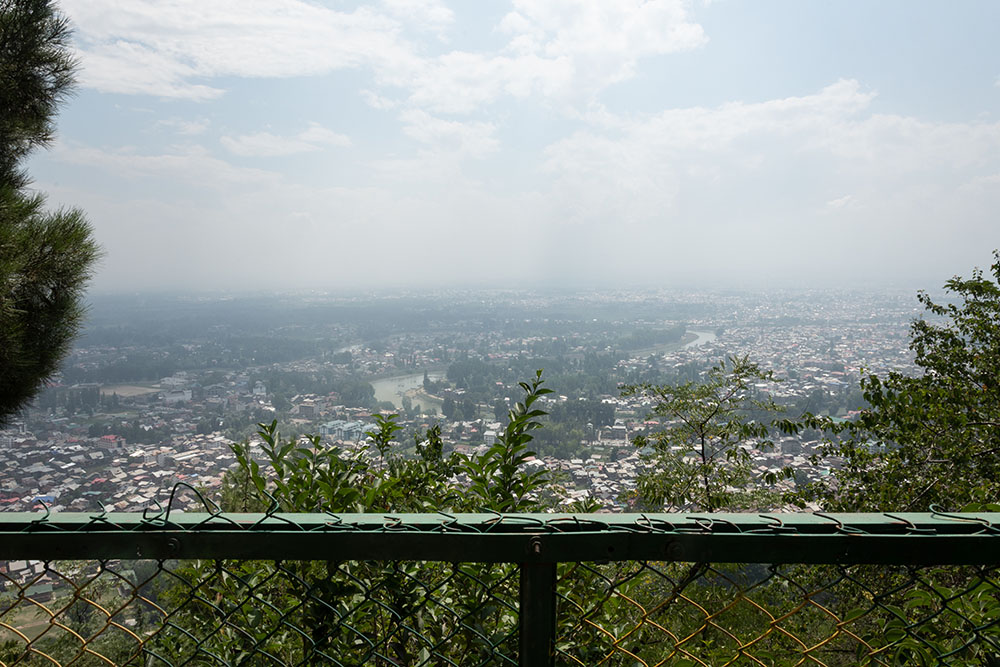 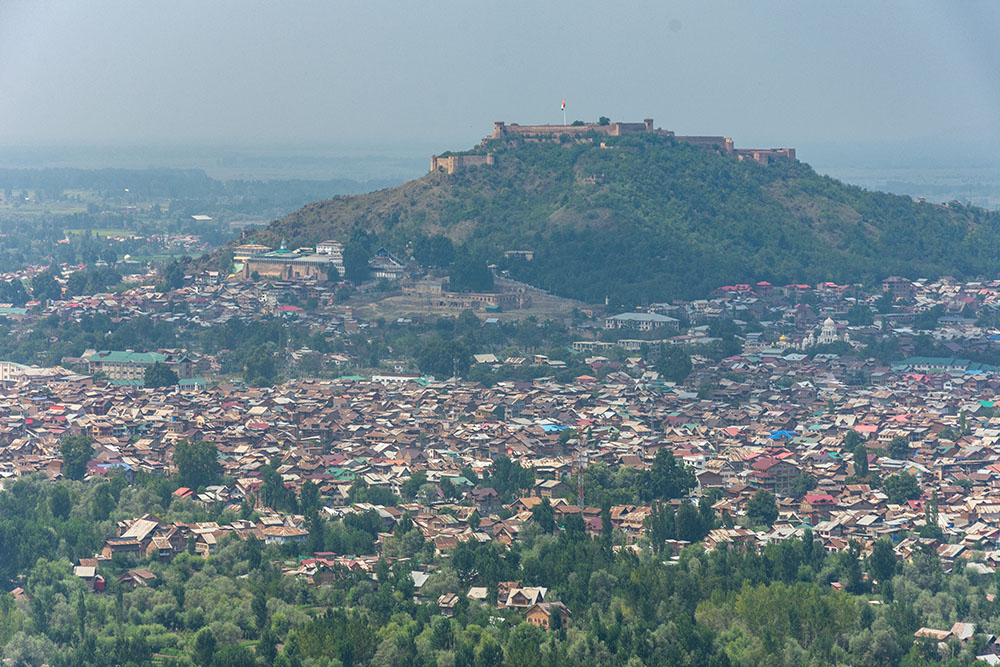 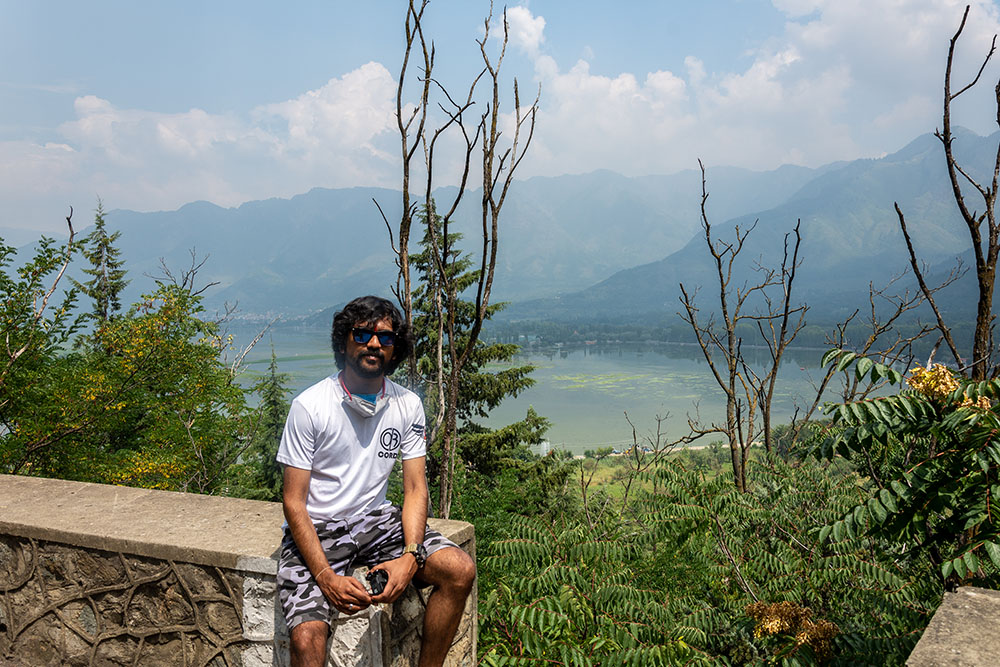 We arrived at the temple gate shortly after. There was a CRPF check post just before the entry point and we were asked to park our car at a short distance from the gate, by the road. To our surprise, they also asked us to leave our cameras and mobile phones in the car.

From that point, one has to climb 200+ stairs to reach the temple. You cannot also see the temple from the parking spot so there is absolutely no way that a person can click any pictures.

The climb is on a steep set of stairs. There are no ponies here as well so you have no other choice but to actually climb on your own. Once you reach the temple though, all the pain really proves to be worth it.

The entire atmosphere of the temple is very peaceful. Srinagar City is visible from all sides of the temple premises. I just loved sitting there under a tree relaxing my tired feet and legs. After resting for a while, we stepped inside the main temple where Shivling is located.

It is a narrow chamber containing a Lingam encircled by a snake. You have to climb another set of about 20 steep stairs to get there. Inside the chamber, you either turn left or right, walk in a circle around the Shivling, and exit.

The first thing that I noticed upon entering the chamber was that a ceremony was being performed that I also got to be a part of. I heard someone using the words ‘private Pooja’ in there. It was being performed specifically for a lady and her family. Nonetheless, we also stayed there until the Pooja was completed.

The second thing that I noticed was that the Pooja was being recorded on cell phones. The lady I believe was the wife of some government official and while she was getting the Pooja completed, a couple of her servants were recording it on cellphones.

Nonetheless, the good part that came out of it was that we got to participate in the ceremony. I think we spent about 10-15 minutes in there.

Since it is a very narrow chamber and there were at least 10 people present inside it at that moment, it got really very hot. When we stepped out, both Maddy and I were completely drenched in sweat.

The next destination on our list was Hari Parbat fort. But by the time we came back down to our car, that idea changed. It really was very hot at that moment and we decided to return to our hotel and go to the temple in the evening.

As fate would have it, that evening did not arrive during our entire trip.

I really regret not going to the fort that day because for the rest of the trip, we kept planning on going there and it kept getting canceled for one reason or another.

We drove back down to Dal Gate and were at our hotel 20 minutes later, after spending some time at the lake. 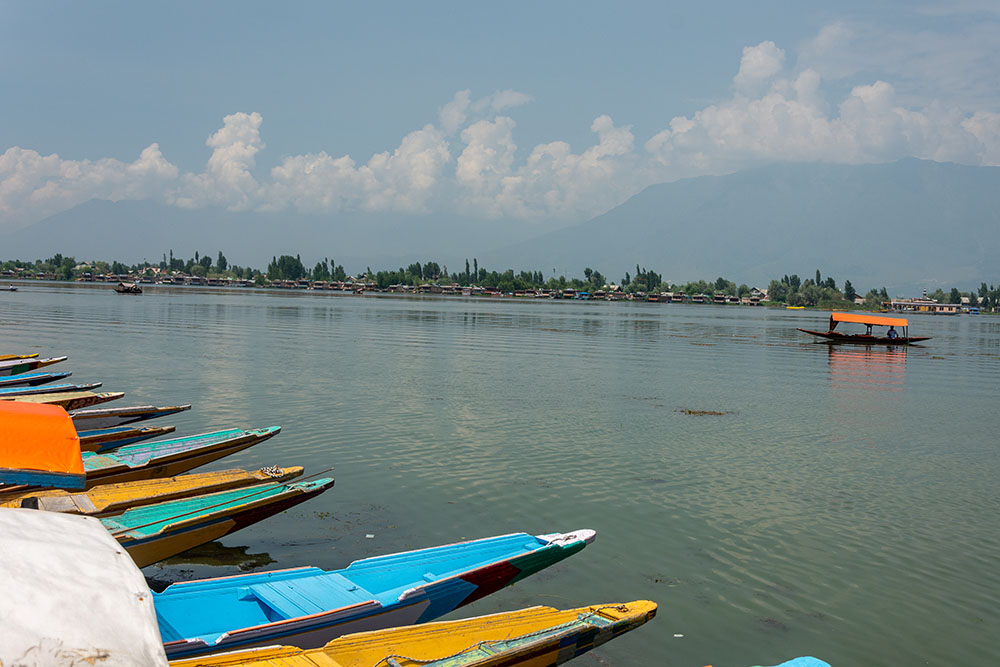 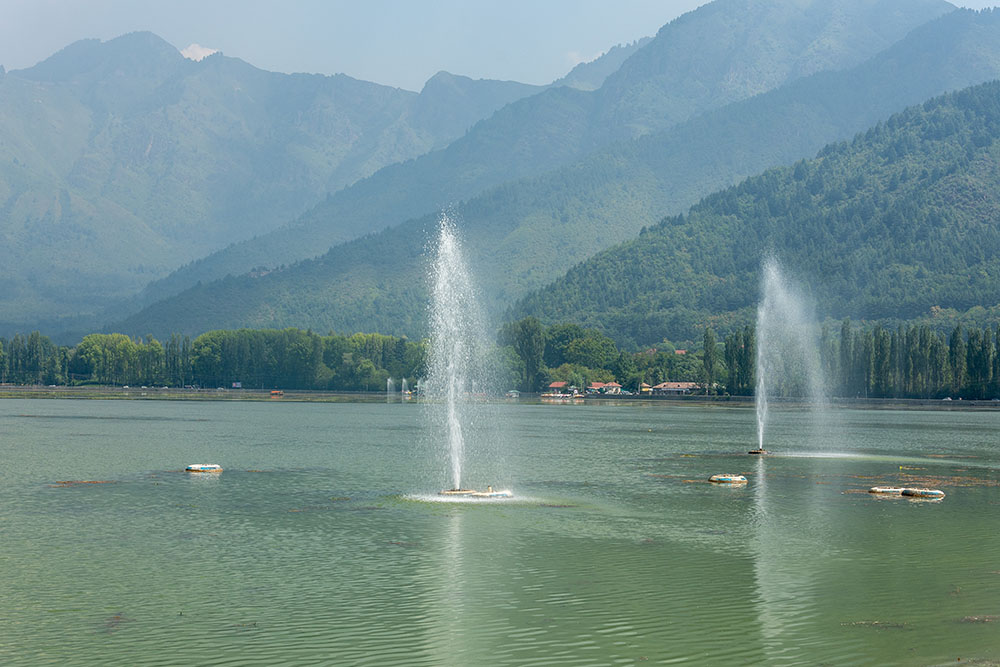 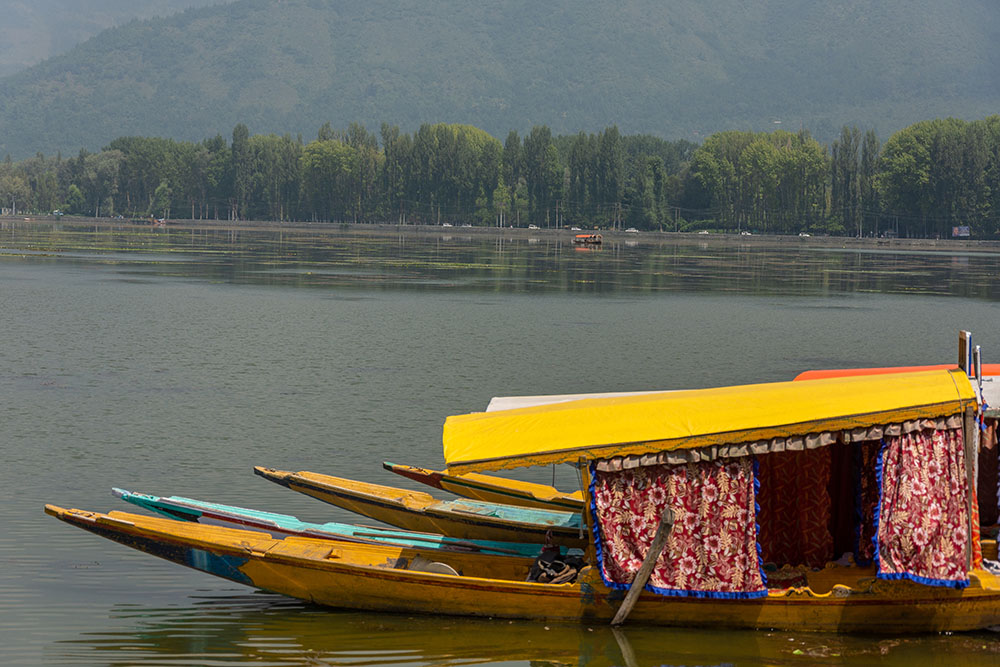 The rest of the day was spent doing nothing really. We were carrying our office laptops as well and since it was a workday, we were both logged in by 5 pm and working.

An Evening at Dal Lake

Around 10 pm that night, we went for a drive to Dal Lake after dinner. The hotel we were staying at was hardly 5 minutes from the lake so it was really convenient to go there.

We sat by the lake for a while, had some ice cream, click some photos, and came back by 10.30 pm. Maddy tried to shoot a timelapse of the moon using GoPro but it did not turn out that well. 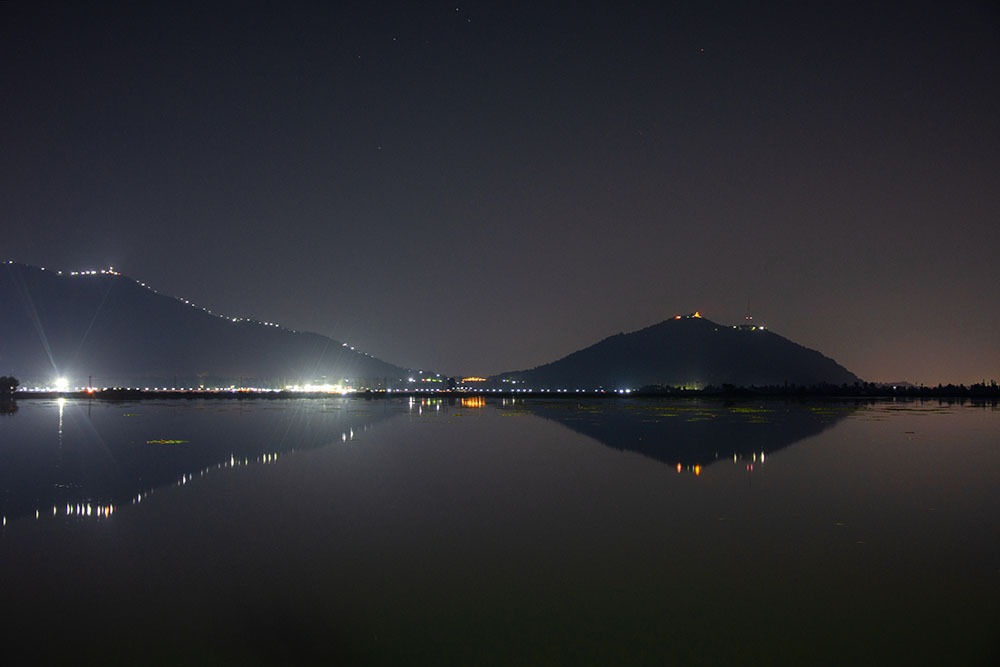 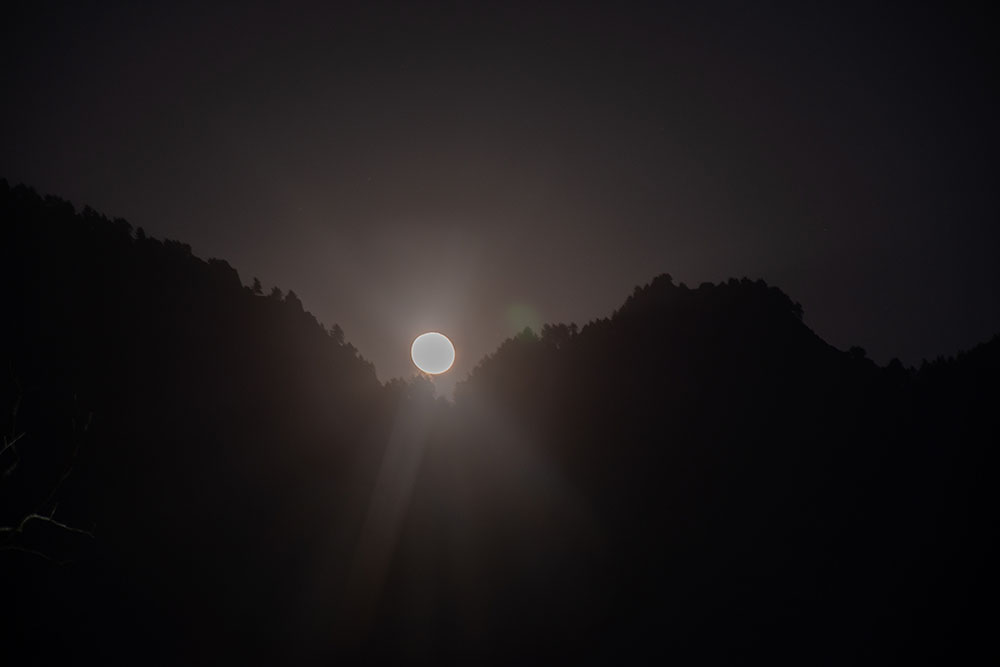 That pretty much was the end of our 4th day of the trip. For the next 5 days, we could not plan anything at all since we had to work until Friday. A stable Wi-Fi was available only in Srinagar and we could not risk going anywhere else.

The next trip happened on Saturday after this when we drove to Sonamarg and spent our weekend there. Please click on the link above to read about that part of our journey.

How to Reach Shankaracharya Temple

The only way to reach Shankaracharya Temple is by either your own vehicle or a private taxi. There is no public transport available for a drop at the temple.

I hope the travelogue, pictures, and information on Dal Lake to Shankaracharya temple were of help. If you have any questions, please feel free to ask in the comments section below. You can also follow me on Instagram and chat with me live or subscribe to my YouTube channel and ask a question there.