The plan for this day was to spend some time in local sightseeing in Junagarh and move on to Diu. We first reached Baba Pyara Caves. After spending around 20 minutes there, we started for Khapra Kodiya caves and reached there in 5 minutes. Our visit to Khapra Kodiya caves got over by 1.25 pm and we started on our way from Junagarh to Diu.

The shortest route to Diu from Junagadh was through Sasan Gir only. We were scheduled to stay there for the next 3 days and explore the place.

We had already driven on Junagadh – Sasan Gir road twice and knew that not many food options would be available on that road.

Therefore, we decided to have our lunch at Junagadh and accordingly went again to ‘Sabrin Non-Veg Restaurants’ which was very near to the clock tower. 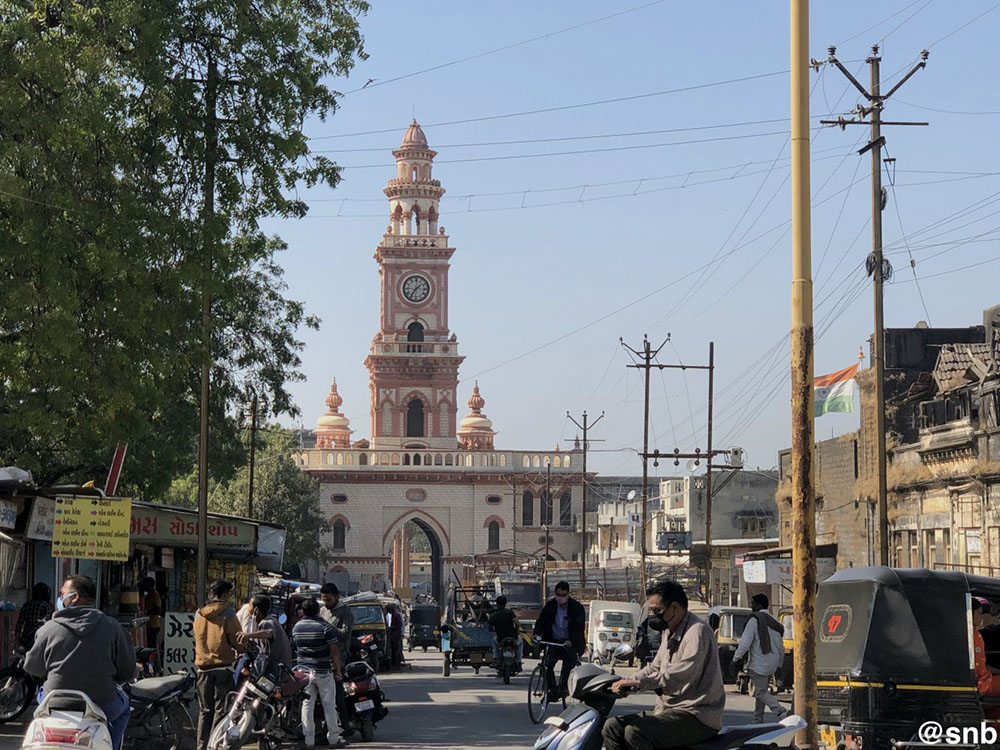 But there was no parking available nearby the restaurants so we had to drop our plan to have lunch there. After passing through the below of the clock tower, we saw a South Indian restaurant named ‘Speed Dosa’.

That area was relatively less crowded and it was possible to park the vehicle beside the road. We ordered Dosa and Dahi-Vada. The food especially Dahi-Vada was really good. We started from there around 2.45 pm.

We took our first break after driving for 1 hour 45 minutes. By that time, we crossed Sasan Gir and Talala and were driving through the woods – probably an extension of the Gir forest.

From a distance, I noticed that some animals were crossing the road and accordingly put the brake. Reaching nearby, we realized that those were Chital deer. There was more than a dozen of Chital deer on both side of the road and some were going from one side to another. So, we stopped our vehicle there.

I got down from the vehicle and had a smoke. All of a sudden, one of the deer started barking and for the first time in my life, I heard the voice of the deer. But that also alerted me. Why was the deer barking? Was there a ferocious animal nearby?

I finished my smoke quickly and got into the vehicle. By that time, there were no deer on the road so, we restarted our drive. 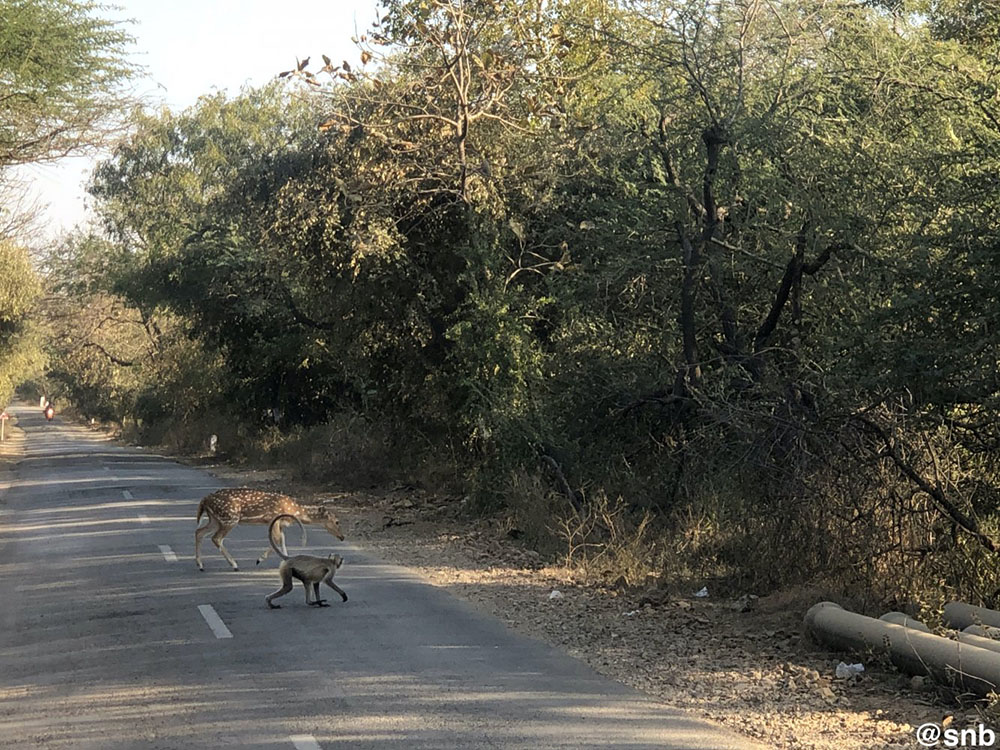 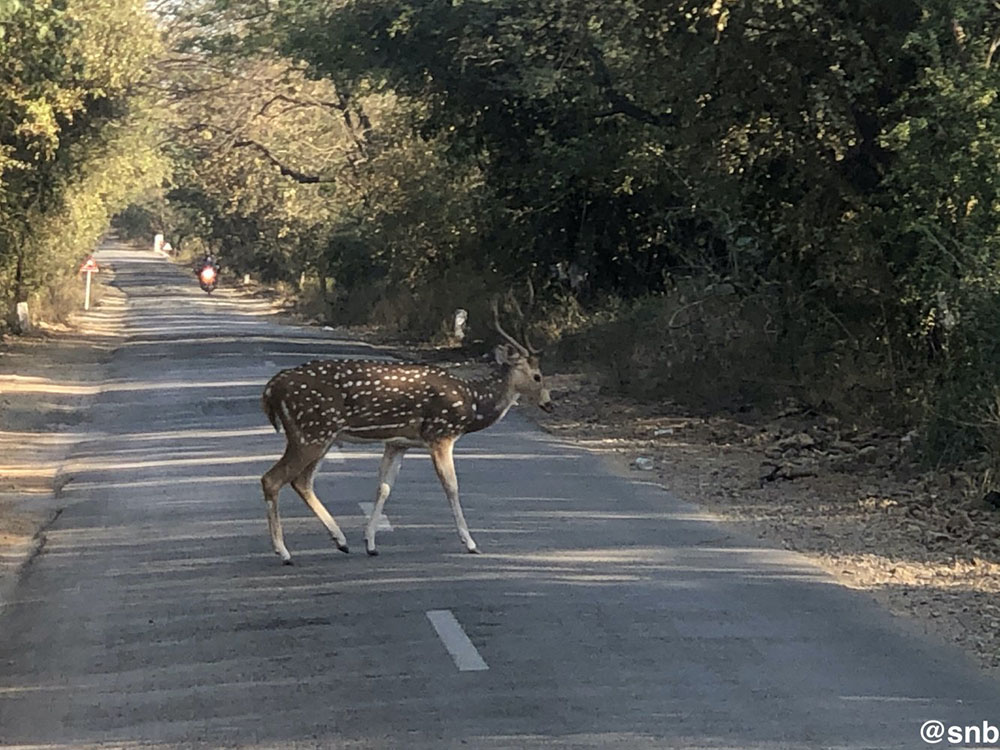 We took one more break before reaching Diu to fill up the oil tank.

The entire route from Junagadh to Diu was state highway except for the last 16-17 km before Diu from Una. But the road surface was good and there were very few vehicles plying on the road. Therefore, driving was a pleasant experience. 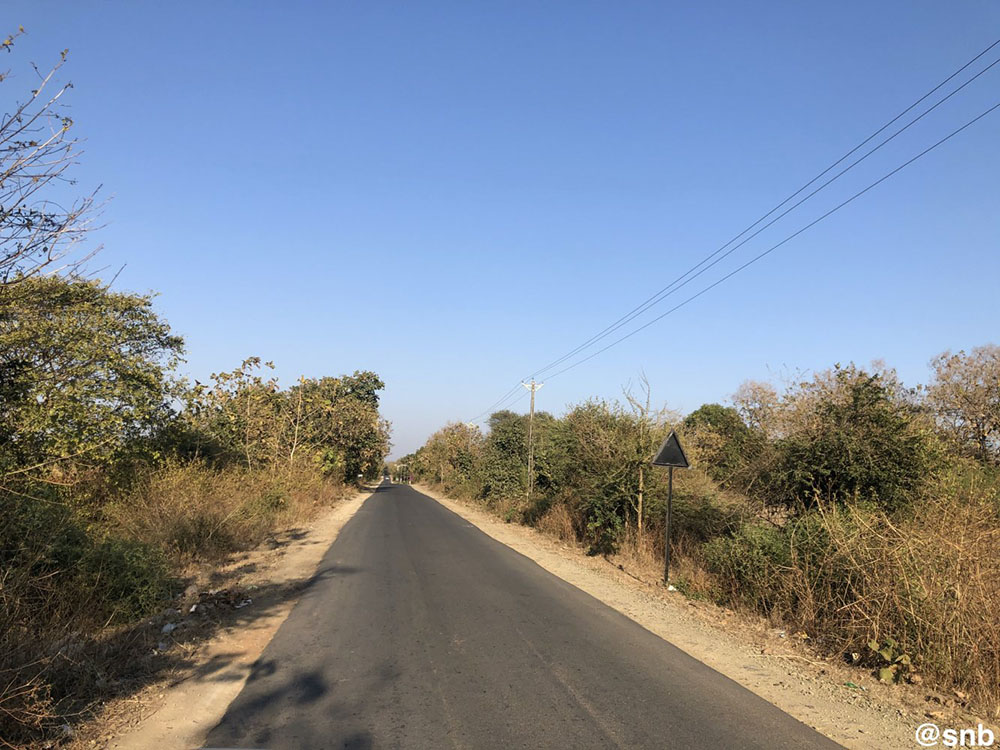 We reached the bridge connecting Diu Island with the mainland at 5.45 pm and stopped over the bridge for few minutes to take some photos. The surrounding was looking beautiful in the golden ray of the setting sun. 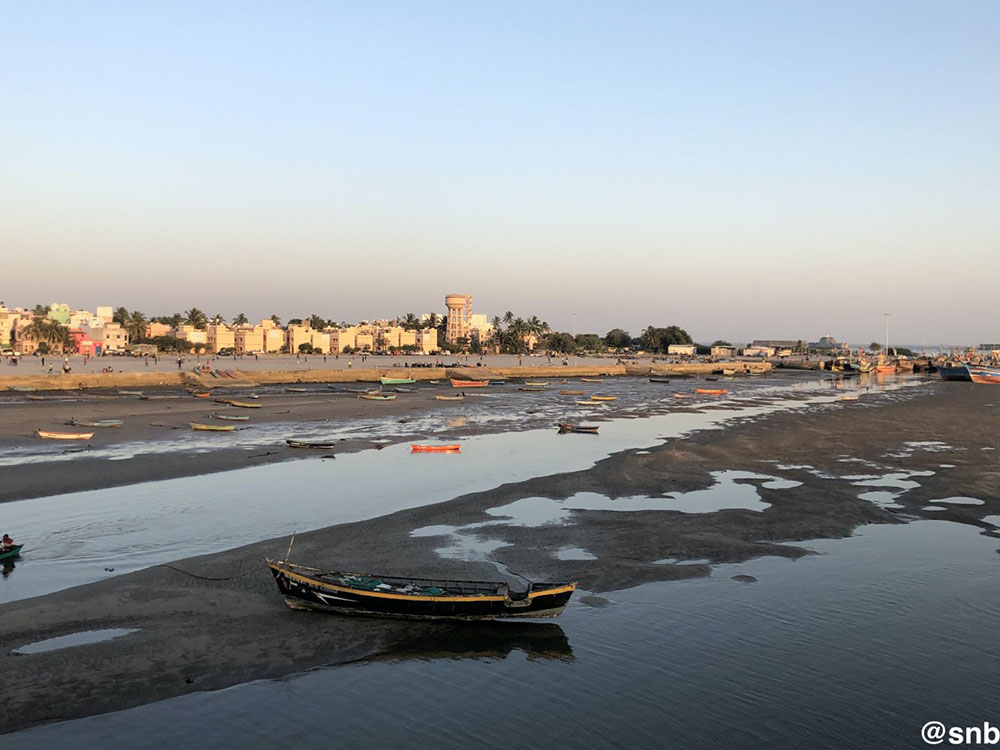 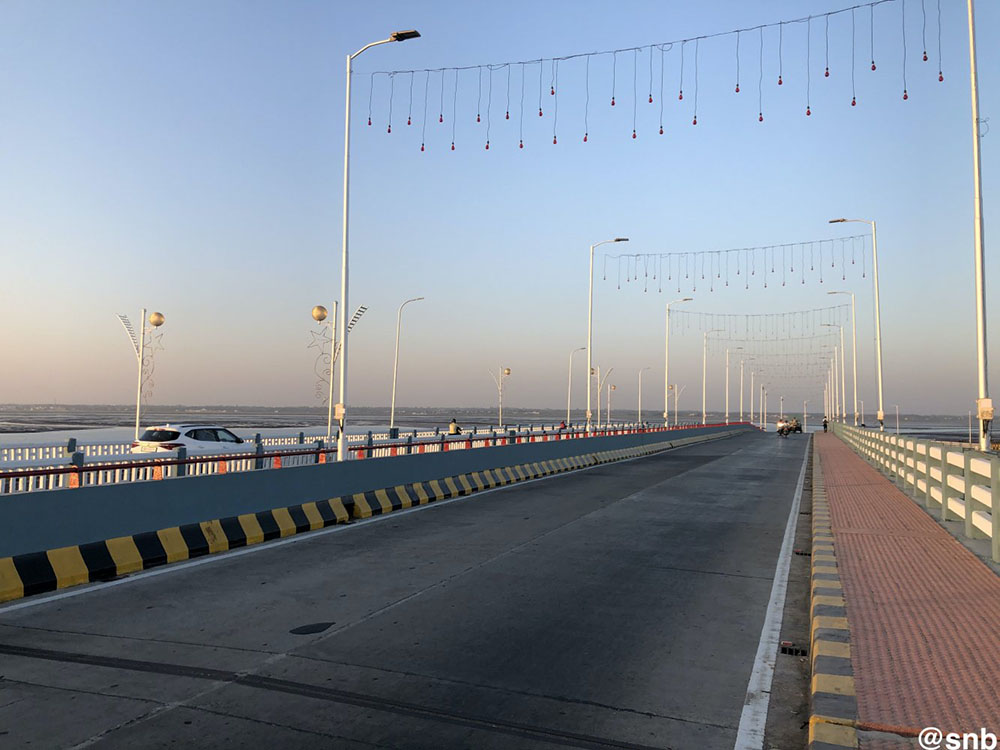 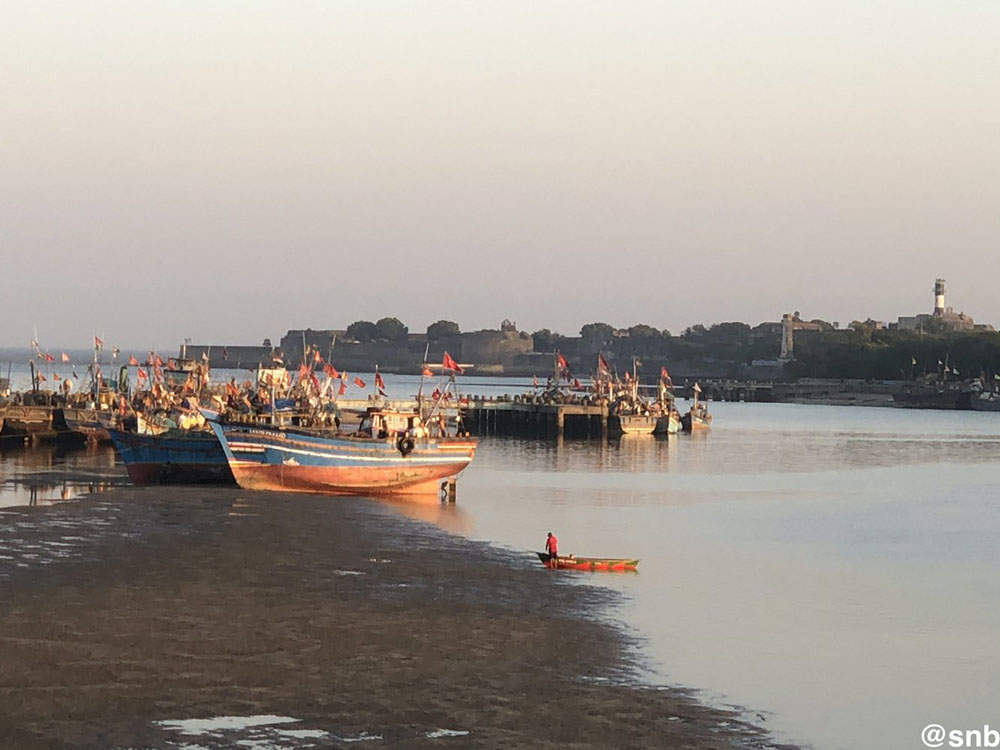 Our accommodation booking in Diu was at Azzaro Resorts and Spa which was an associated property of Club Mahindra. It took another 5 minutes to reach there. The check-in happened smoothly albeit after fulfilling Covid-19 related formalities.

After taking a rest for an hour or so, we decided to go out. We came down to the reception and enquired about the places where we can go in the evening. The reception people recommended Nagoa beach. They also said that there would be multiple dinner options at Nagoa beach.

By the time we started for Nagoa beach, the moon had risen in the eastern sky. There brightly painted buildings at the other side of the road, getting illuminated by electric light and getting washed by moonlight, were looking stunningly beautiful. 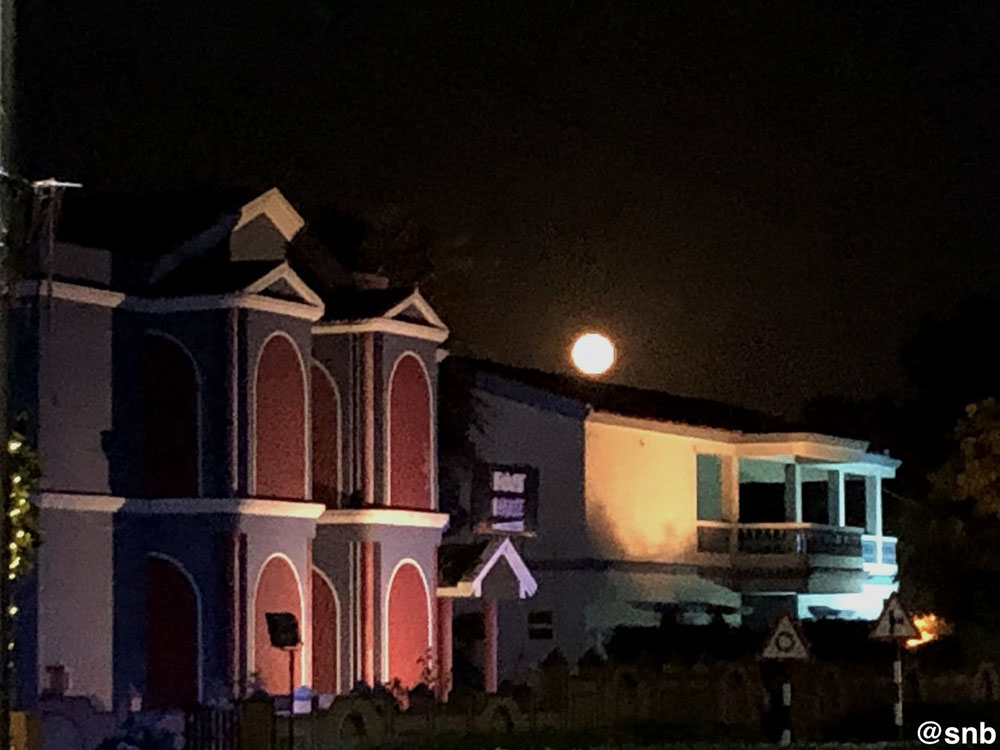 The roads of Diu are fantastic. It took around 15 minutes to reach Nagoa beach. Nagoa beach is the only beach of Diu which has been commercially developed. A vehicular road runs parallel to the beach and there are many stalls on both sides of the road. There are places for parking vehicles. During day time, several water sports take place at this beach.

We did not enter any stall and straightway headed to the east-facing beach. It was low tide then. The tides were gentle and caressing the shore lazily. Moonlight was getting reflected from the wavy seawater. At the backdrop, there were lights from other parts of Diu at a distance. It was a mesmerizing evening on the beach. 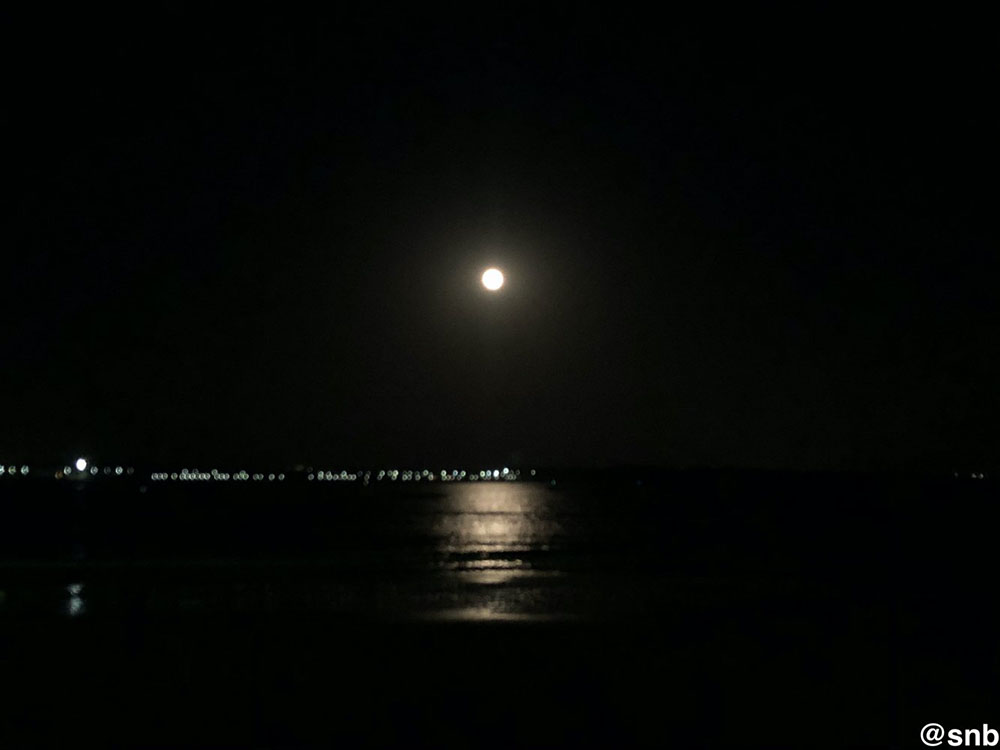 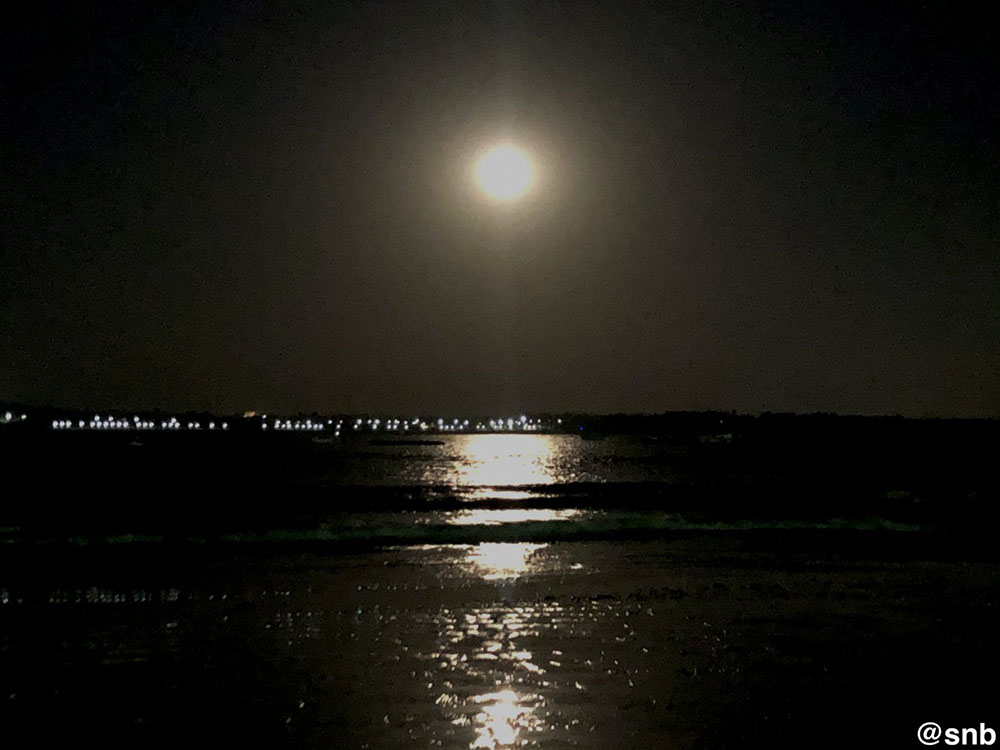 There were several security guards on the beach who were ensuring that nobody went closer to the water. So, after spending some time at the edge of the beach, we went to Chulawala Restaurant & Bar across the road for dinner.

We came back to our resort after having a couple of beers and ample non-vegetarian food there. Please click on the link above to continue reading the next part of this travelogue.

I hope the travelogue, pictures, and information on traveling from Junagarh to Diu Island were of help. If you have any questions, please feel free to ask in the comments section below or at our Community Forum, and I will be happy to answer.