The plan for this day was to go to Junagadh to see various historical attractions at Junagadh and then go to Diu from there where we were scheduled to stay for 3 nights. The list of attractions included the Junagadh rock inscription, Baba Pyara caves, Uparkot Fort, Navgan Kuvo (in the premises of Uparkot Fort), Uparkot caves, Adi Kadi Vav, Khapra Kodiya Caves, and Mahabat Maqbara Complex.

We started for Junagadh from Club Mahindra Resort, Sasan Gir at 10.30 am and reached there around 11.30 am. The road was good for the most part and the journey was smooth.

Junagadh is quite an old town. Translated, Junagadh means “Old Fort” (Jhuna Gadh). The earliest historical evidence found in Junagadh is the Uparkot fort which was constructed in 319 BCE by Chandragupta Maurya, the founder of the Mauryan dynasty.

After Maitrakas, Junagadh was ruled by Chudasams, Solankis, and Vaghelas. Vaghelas was the last Hindu ruler of Gujarat. After their fall, Junagadh came under the control of the Gujarat Sultanate who was ruling from Ahmedabad/Champaner. During this period, for some time, Junagadh was being ruled by fairly independent rulers with token allegiance to Gujarat Sultanate.

Junagadh became a part of the Mughal Empire at the time of Akbar. In 1730, Mohammad Sher Khan Babi, who owed allegiance to the Mughal governor of Gujarat Subah, founded the state of Junagadh by declaring independence after the invasion by the Maratha Gaekwad dynasty.

Babi founded the Babi Dynasty of Junagadh State. His descendants, the Babi Nawabs of Junagadh—who were Babi or Babai Pashtuns from Afghanistan. They conquered large territories in southern Saurashtra and ruled for the next two centuries; first as tributaries of Marathas, and later under the suzerainty of the British, who granted the honor of a 13-gun salute.

Post-independence, though the ruler of Junagadh was keen to accede to Pakistan, Junagadh became a part of India.

Just before entering Junagadh, we again encountered Gujarat police. My daughter was not wearing a mask. So, they demanded Rs. 1000/- as fine. But this time, I argued with them vehemently.

My line of argument was that the inside of a private vehicle cannot be treated as a public place and therefore, we had not broken any law. After an argument for 5 minutes, they let us go. 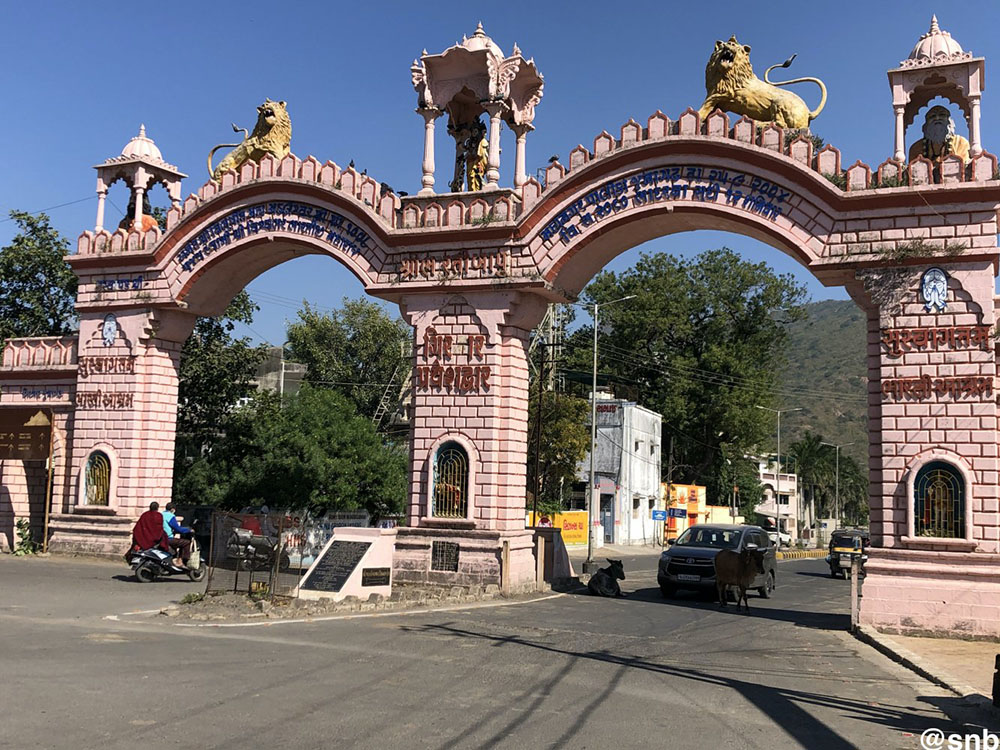 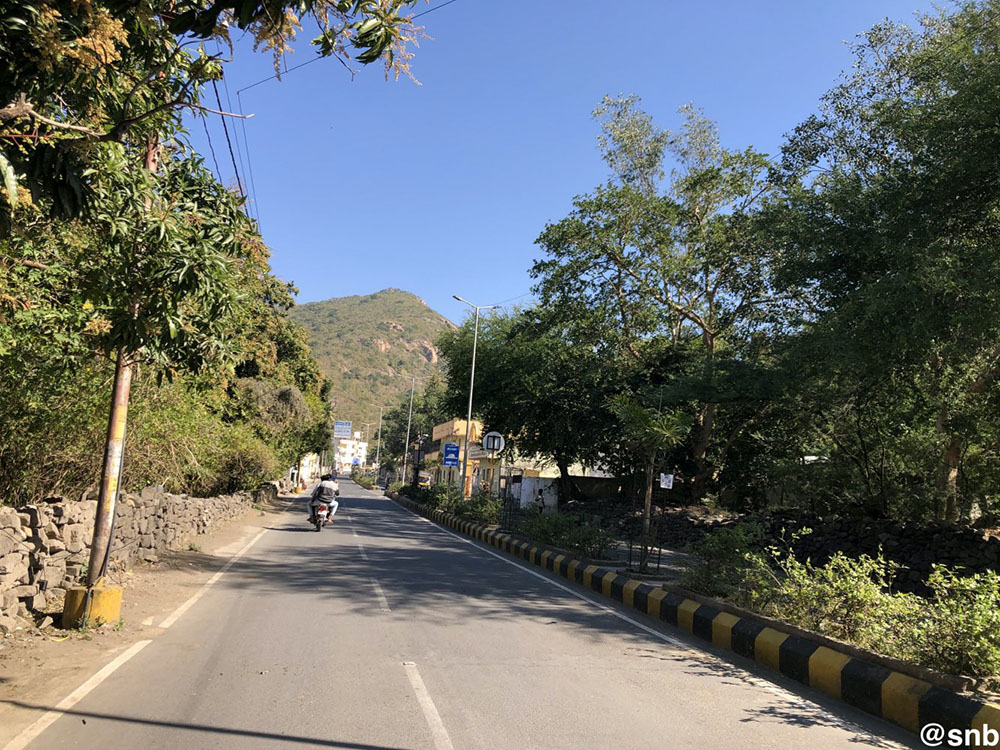 This rock inscription was discovered by Colonel James Todd in 1822. But he could not decipher the writing and therefore copied it and sent the same to the great scholar James Princep in 1837.

Princep decoded the content of the rock inscription. It was written in Brahmi script. Princep found that this rock contained three sets of inscription – that of Ashoka (written around 250 BCE), of Western Satrapa ruler Rudradaman I (written around 150 CE), and inscription of Gupta King Skandagupta (455-467 CE).

In 1900, Nawab Rasool Khan of Junagadh built a protective building around the rock. It was repaired and restored in 1939 and 1941 by the later rulers. At present, ASI manages this place and the entry fee for the Indians is Rs. 25/-.

As per the prevailing norms, we booked the ticket online there then entered the premises. As soon as we entered, we saw a huge white rock resembling the shape of a sleeping elephant.

It measured ten meters high and seven meters in circumference. It was guarded by a wooden barricade from all sides. There was a wooden staircase leading to a platform from which the visitors could get a clear view of the upper part of the rock. 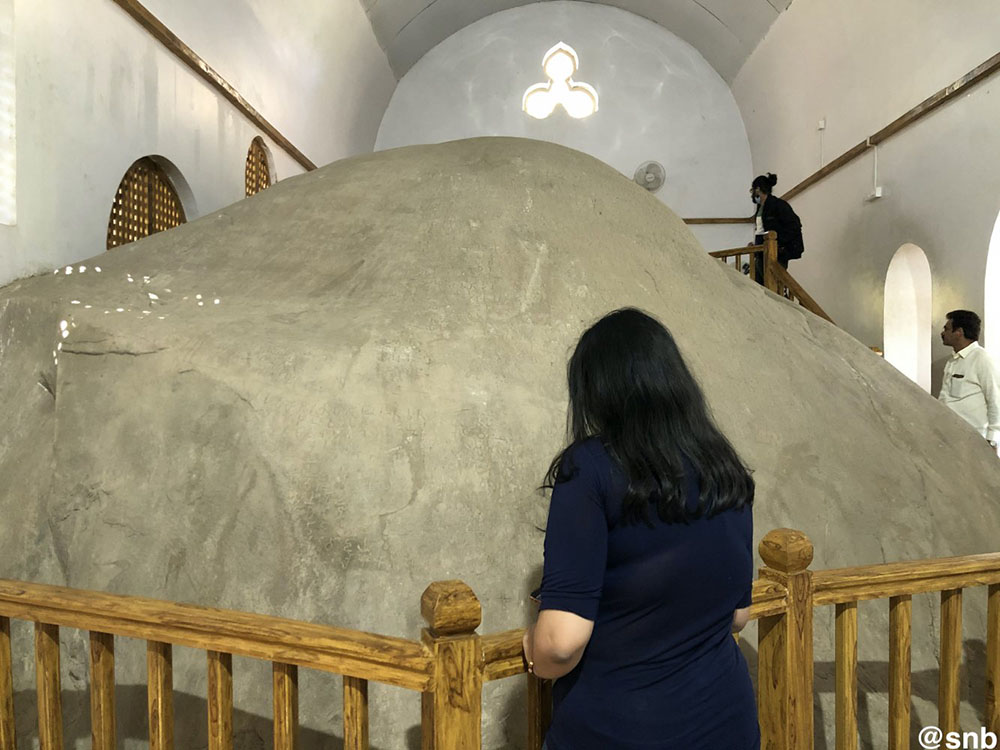 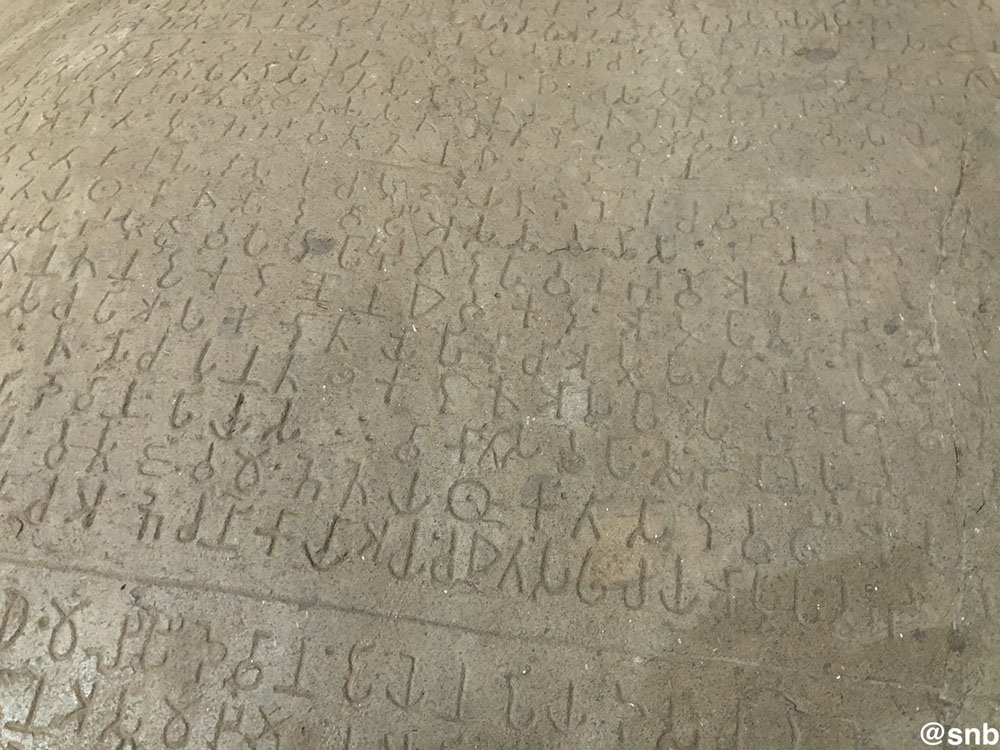 Other than this rock, there are multiple boards within the premises. They contain the translation of the inscriptions of Ashoka, Rudradaman I, and Skandagupta.

At this place, from the guard, we got another disappointing news of our trip. Uparkot Fort complex and Mahabat Maqbara Complex were closed at that time.

This was not because of Covid-19, but because of ongoing restoration work. So we had only two other attractions of Junagadh left for the day – Baba Pyare caves and Khapra Kodiya caves.

Both Baba Pyara caves and Khapra Kodiya caves are Buddhist. In today’s Gujarat, the most prominent pilgrimage sites are Somnath Jyotirlinga temple and Dwarkadeesh temple both of which belong to the Hindu religion.

But in the ancient past, Gujarat was an important center for Buddhism. Several literary sources mention that Buddhism had reached Saurashtra in the age of Lord Buddha. But as per archaeological evidence, Buddhism spread in Saurashtra region during the time of Ashoka.

Junagadh rock inscription, Baba Pyare caves, and Khapra Kodiya caves, etc bear the testimony of Buddhist influence on the Saurashtra region in the distant past.

We reached Baba Payare caves at 12.30 pm. These caves are among the earliest and the most important three groups of caves at Junagadh – the other two being Khapra Kodiya caves and the Buddhist caves at Uparkot fort.

All these caves were first reported by Sir James Burgess. Currently, These Baba Payare caves are being maintained by ASI and have entry tickets costing Rs. 20 per person. The same ticket is valid for the Khapra Kodiya group of Caves too.

Baba Pyare caves were close to the Modhi-Math, popularly known as Baba Pyare’s ashram and the name of these caves has been derived from that. There are three distinct levels of caves scooped out of the same rock face but these three levels do not follow the same unified direction.

The topmost level has four caves, the largest one with three separate inner cells and a common front door, the cornice of which preserves the remnants of a chaitya window carvings. The next set of caves has a spacious courtyard with an apsidal hall.

The balcony to this hall has six square pillars supporting Lion Brackets, a crude chaitya window, and a winged lion in low relief at either end of the wall. Auspicious Buddhist symbols like Swastik, Triratna, Ankush, Fist, etc. can be seen on the main door lintel of the cells and ‘Purnaghat’ with overflowing foliage, etc. on the doorjambs.

The lowest group of caves has a front courtyard and an inner cell. The caves flanking the southern edge have five steps of caves.

The largest one has a squarish inner hall and a single octagonal pillar in the center which, with an Abacus of the three thin stepped chambers and an inverted globular jar from under it, resembles the western India caves at Nasik, Junnar, etc.

All these devices show a direct impact of Satvahana art idioms and favor to date these caves not later than the 2nd century CE. 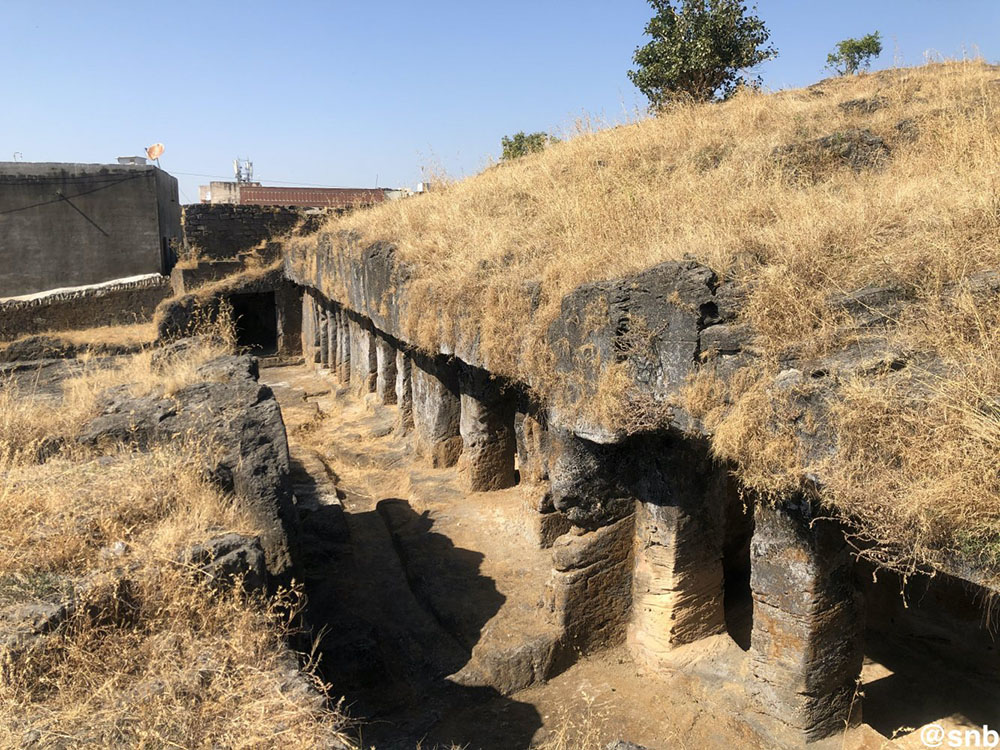 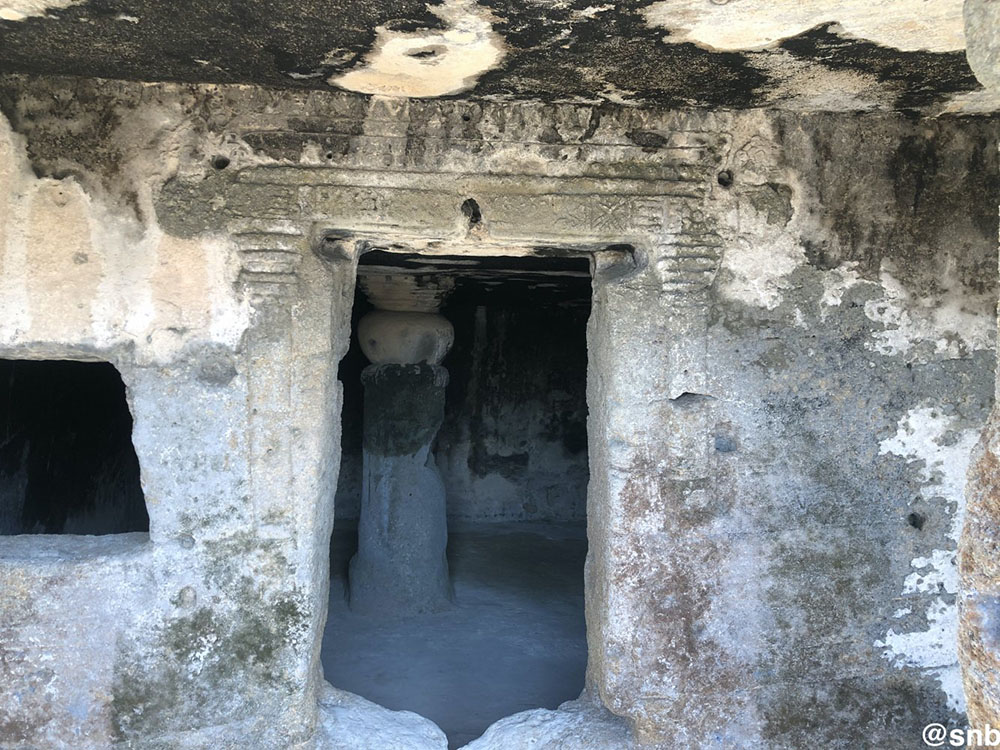 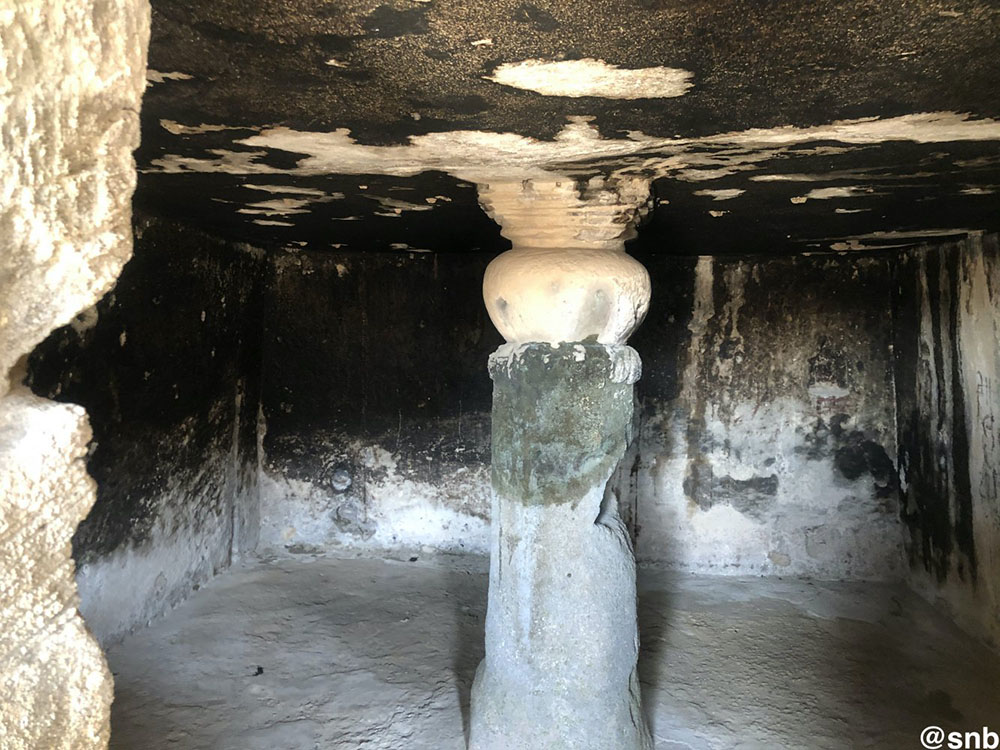 After spending around 20 minutes there, we started for Khapra Kodiya caves and reached there in 5 minutes.

Khapra Kodiya caves are cut into a ridge of a trap rock in an east-west direction. All the chambers of these caves are a kind of broad “U” shaped quadrangle formed by rock excavation on the southern side.

The prominent wings of the caves comprise of

There are many scribblings and short cursive letters on the walls of some chambers and their corridors. Based on all available evidence taken together, these caves are assumed to be dated before the 3rd/4th century of the common era. 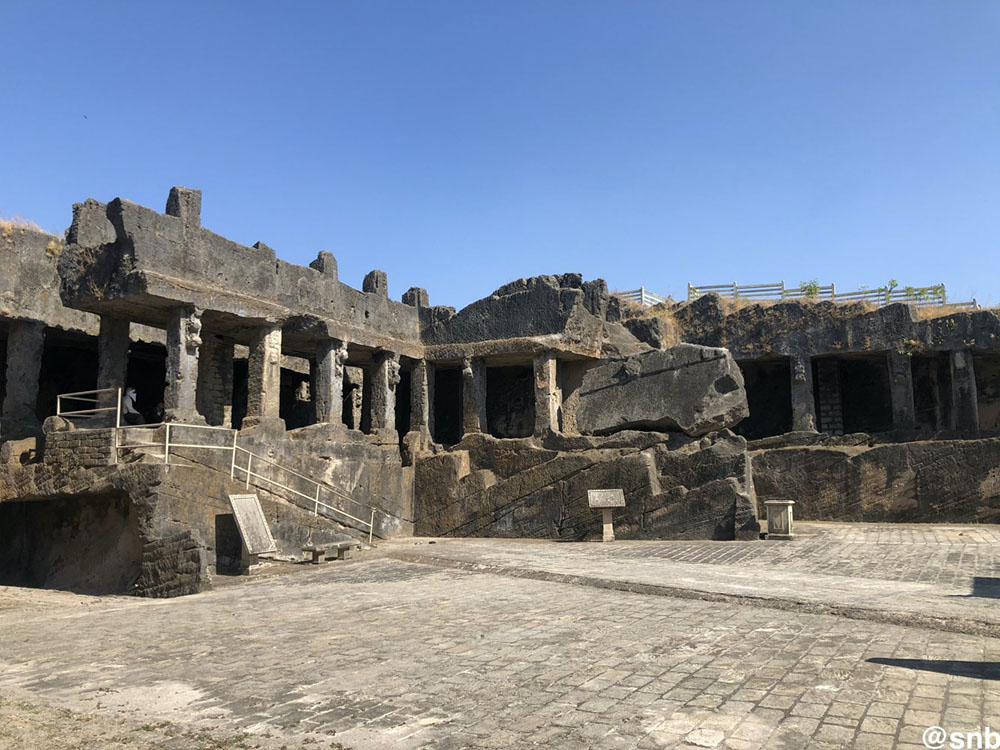 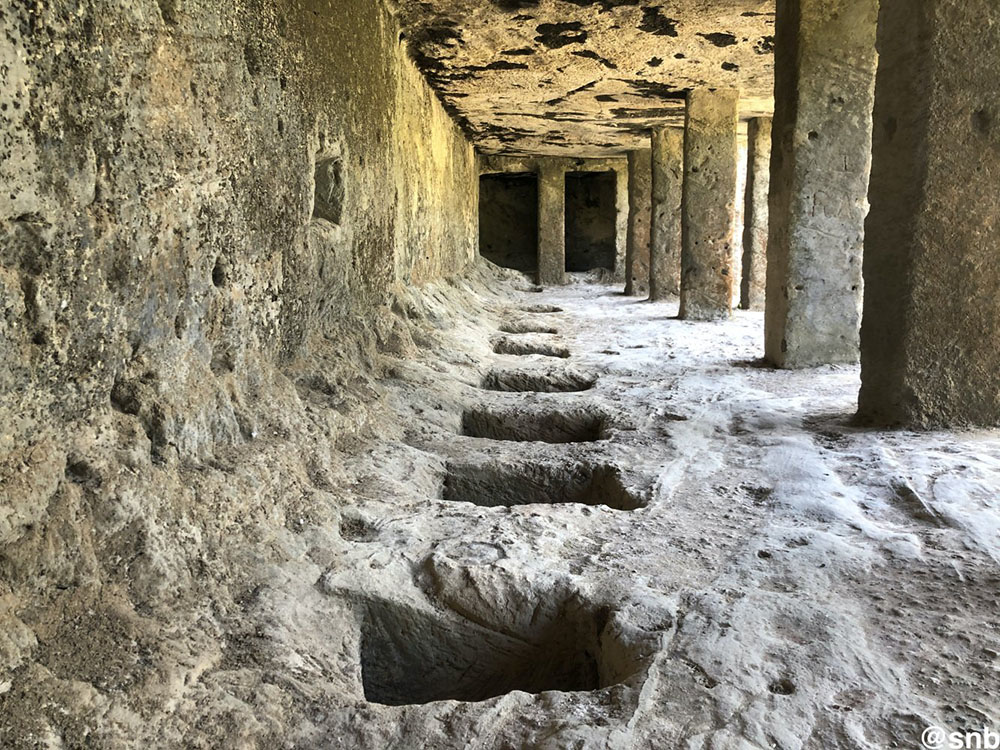 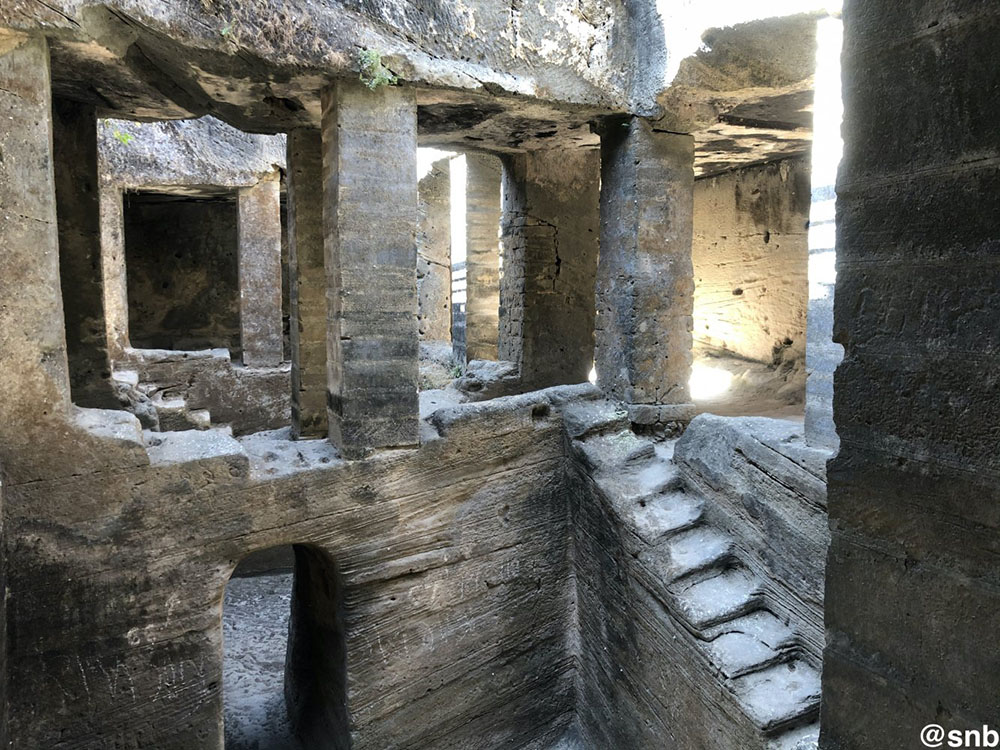 Our visit to Khapra Kodiya caves got over by 1.25 pm and we started for Diu. We were scheduled to stay there for the next 3 days and explore the place. Please click on the link below to continue reading the next part of the travelogue.

I hope the travelogue, pictures, and information on Baba Pyara Caves and Khapra Kodiya Caves were of help. If you have any questions, please feel free to ask in the comments section below or at our Community Forum, and I will be happy to answer.