This post is in continuation with a previous one and a part of my Gujarat road trip log. After arriving in Champanaer, we spent some time exploring Shaher ki Masjid, Jami Masjid, and Pavagadh Hills. From there, we moved on to Rani ki Vav, Sahastralinga Talav, and Modhera Sun Temple on Day 2, details of which are narrated in this article.

To read the previous parts of the travelogues, please click on the links below.

After spending some time at Sahastralinga Talav we started for our next destination for the day, the Sun Temple at Modhera at 4.30 p.m.

The distance of Modhera Sun Temple from Sahastralinga Talav is 35-40 km. It was a state highway. The road condition was good. We managed to reach the temple by 5 pm. There is a huge parking lot adjacent to the boundary wall of the temple complex and we parked our vehicle there.

Though I had managed to book e-tickets for Rani Ki Vav at Patan in the morning before the start of the day’s trip, I could not do the same for Modhera Sun temple. So we spent 4-5 minutes there to book the e-ticket with the help of the ticket counter fellow. Each ticket cost Rs. 20/-.

This temple is no more practicing and is being maintained by ASI. The entry of the temple complex is from the east. There is a paved path of a few hundred meters from the boundary wall gate to the temple proper. 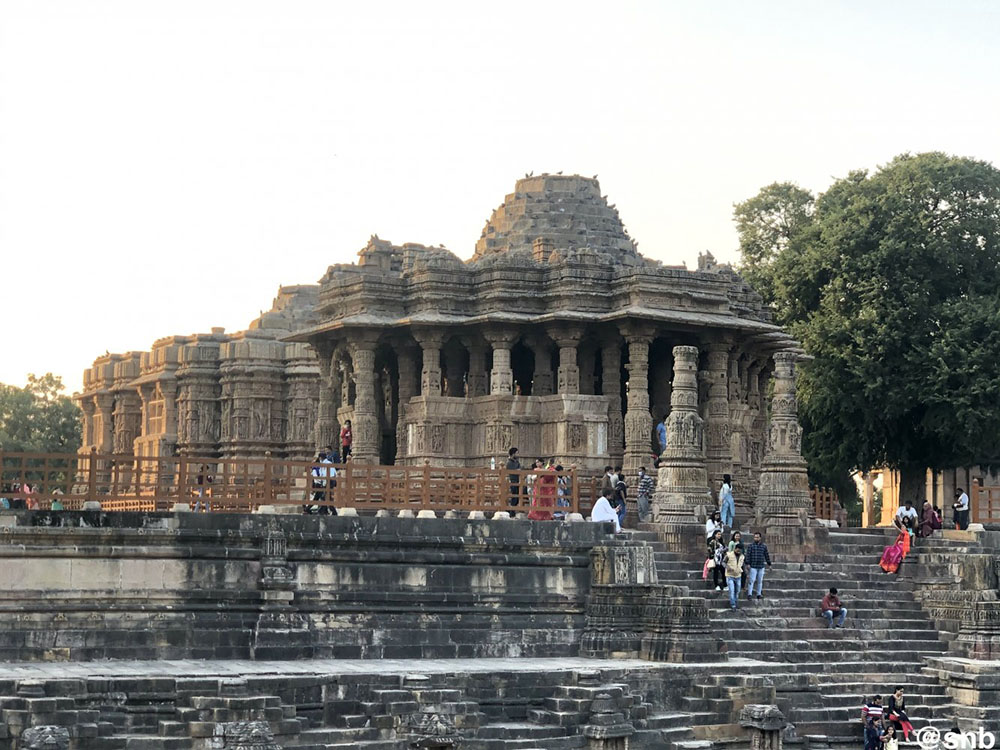 The temple complex has three components: (1) Kunda (Ramakunda/Suryakunda), the reservoir, (2) Sabhamandapa (Nrityamandapa), the assembly (dancing hall) hall, and (3) Gudhamandapa, the shrine hall in the same order from east to west.

It appears that when the temple was functional, people used to take bath first in the Kunda. Then they used to come to Sabhamandapa, and from there used to enter the Gudhamandapa for worship.

The Sabhamandapa is arranged with its long side transversely disposed towards the principal orientation of the temple complex, its plan spreading outwards in several projecting bays.

Balcony slabs of the Sabhamandapa are divided into panels carved with attendant figures above which rise the column with vase and foliage motifs at their bases. The capitals of these columns are diminished, thus emphasizing the brackets fashioned into foliage and animal motifs.

The interior columns have their shafts carved with bands of lion masks and mythological scenes. Springing from intermediate capitals halfway up the shafts are open-mouthed aquatic monster brackets supporting curved and cusped arches created by garlands and lotus buds.

These appear to hang suspended between the columns framing the entrances to the hall and the central interior space. The outer columns have brackets supporting an overhanging eve. 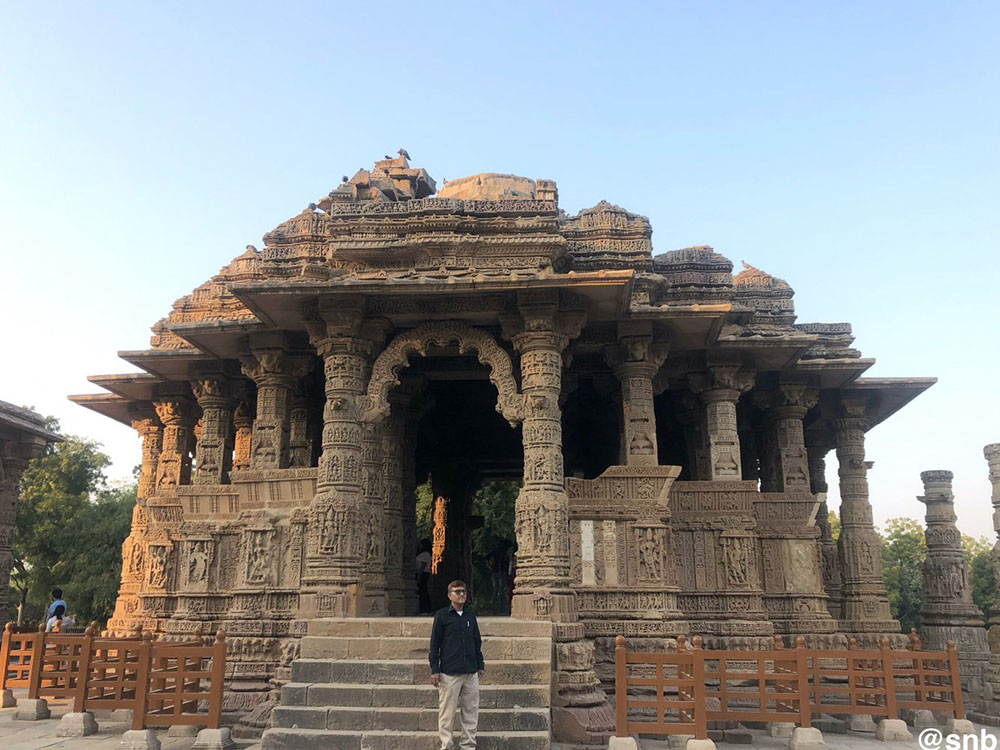 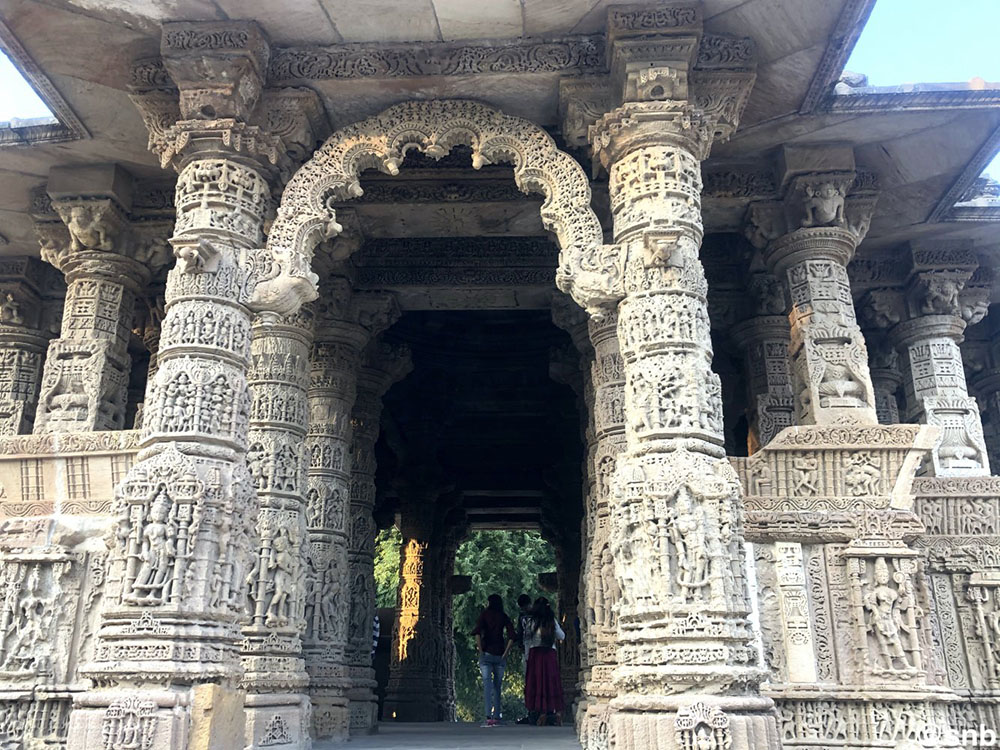 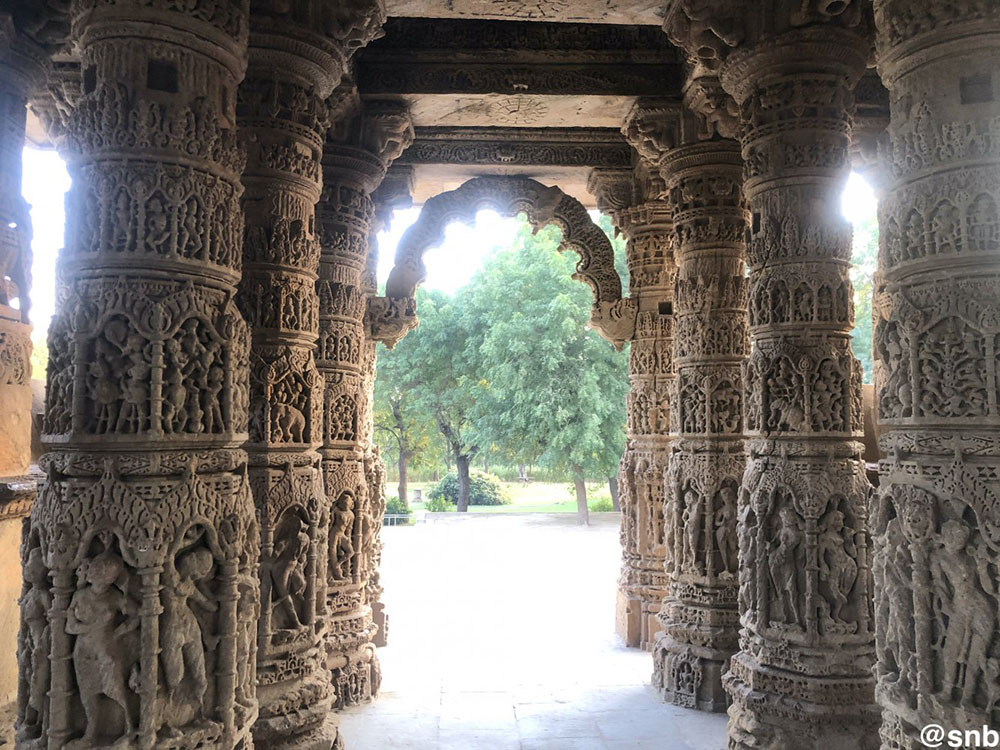 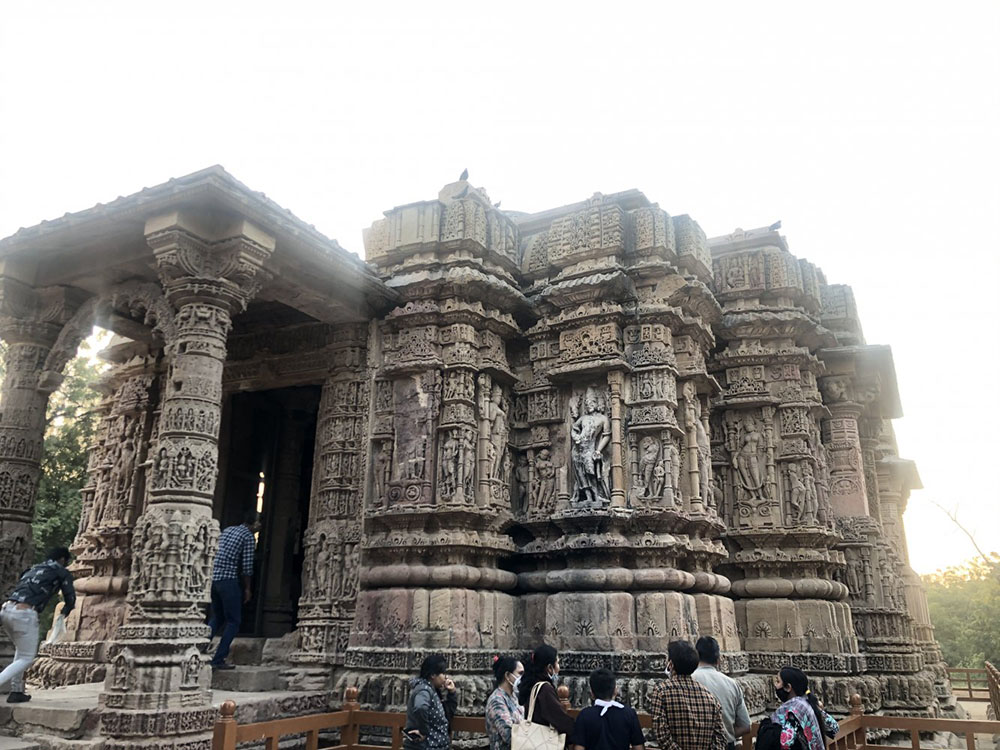 The Gudhamandapa measures 51 feet 9 inches by 25 feet 8 inches. It is equally divided between Antarala (the hall) and the Garbhagriha (sanctum sanctorum). Both Antarala and Garbhagriha are rectangular in plan with one projection on each of the smaller sides and two projections on each of the longer sides.

These projections on the smaller sides form the entrance and the back of the shrine. The three projections of the outer wall of Gudhamandapa had windows on each side and the east projection had the doorway. These windows had perforated stone screens; the northern is in ruins and the southern is missing.

Today, there is no idol there. It is said that the main idol was made of pure gold and depicted the sun sitting on his chariot with 7 horses with his Sarathi Arun driving the chariot.

It is said that the diamonds on the idol could light the whole temple. The idol sat on a deep plinth that was again filled with gold coins. Today, all you can see is the deep pit in Garbhagriha. Nobody knows where the missing idol is. 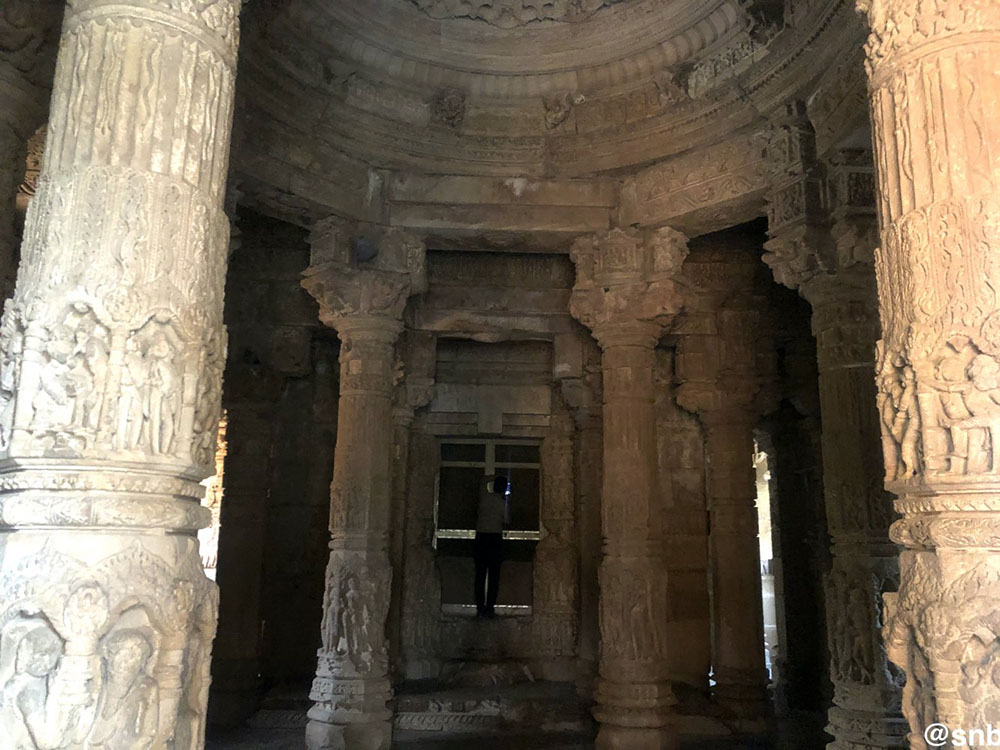 There is a Pradakshina Path, which is a passage between the walls of Garbhgriha and the outer walls of Gudhamandapa, surrounding the Garbhagriha from three sides. The roof of the Pradakshina Path has stone slabs carved with rosettes. 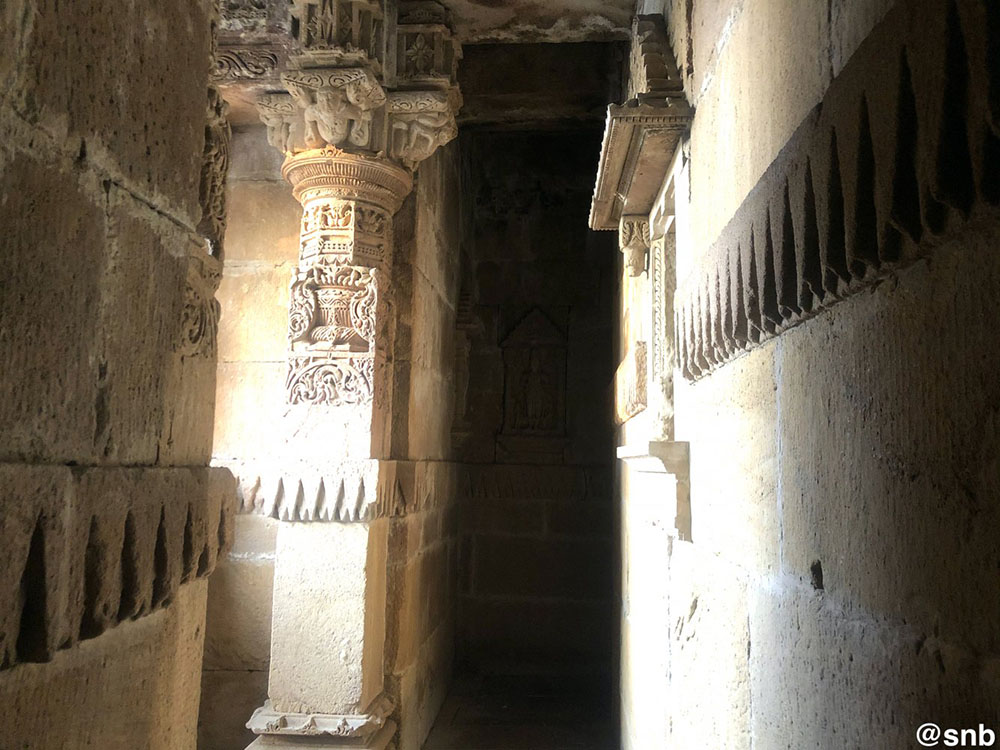 The Gudhamandapa is designed in a way that the first rays of the rising sun lit up the image of Surya during solar equinox days. On summer solstice day, the sun shines directly above the temple at noon casting no shadow. It sits on a plinth that is designed like an inverted lotus.

On top of lotus petals is a panel carved with Elephants called Gaj-Petika. Above these the entire life cycle of a human being is carved; starting right from the time a human being is conceived with an act of intercourse to the death depicted with last rites.

Rear side view of the Gudhamandapa 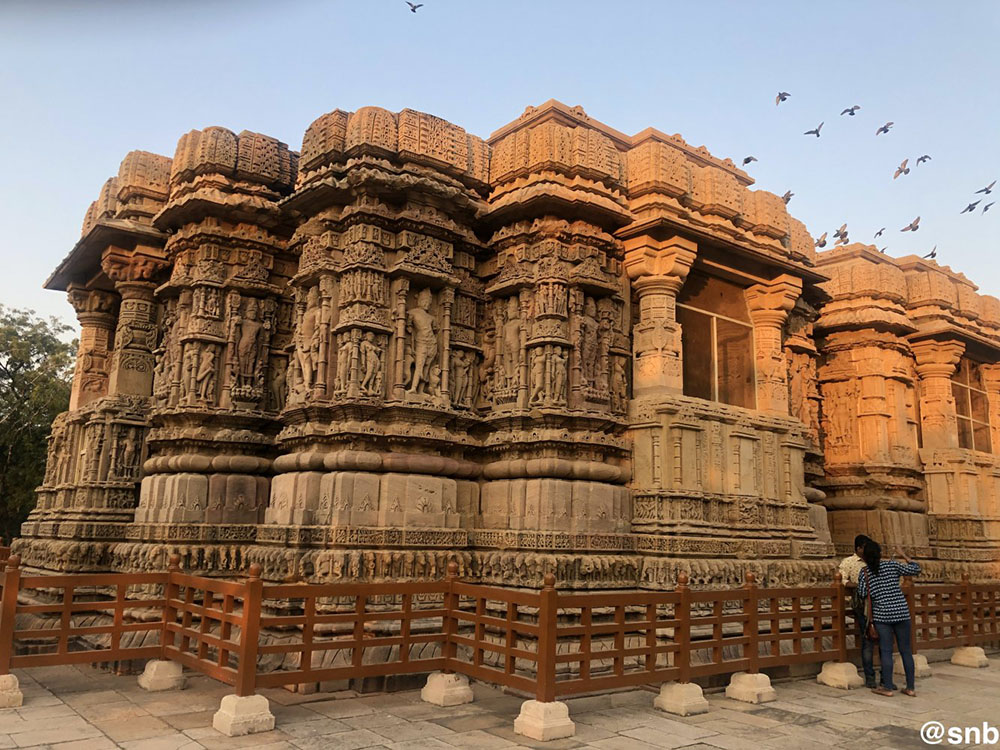 The sculptured outer wall of the Gudhamandapa 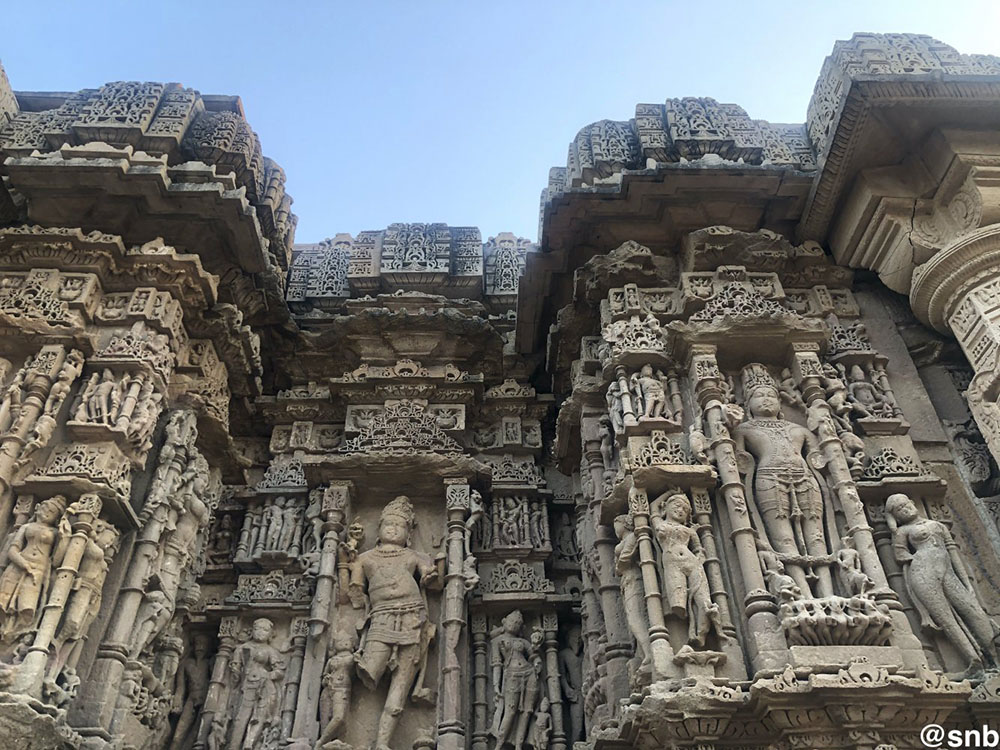 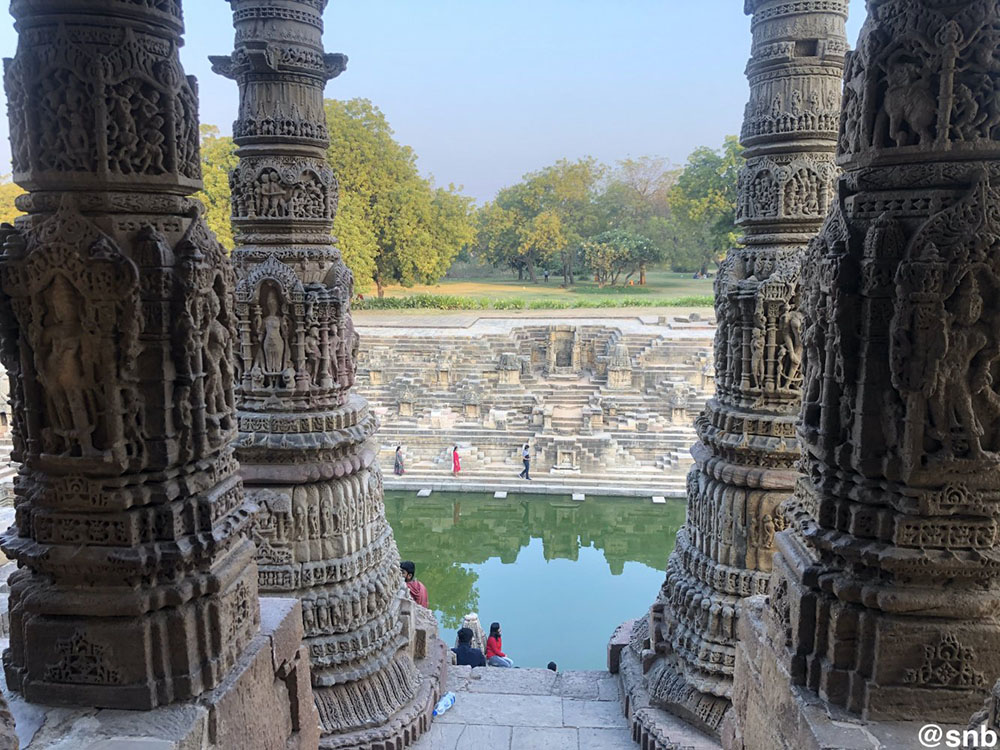 It has pyramid-shaped steps forming some intriguing geometric patterns on the steps. However, what makes this tank distinct from other similar temple tanks, is the presence of big and small temples on its steps. On the step directly opposite the temple, a temple has Vishnu on Shesh Shaiya.

There are temples dedicated to Ganesha and Shiva as Nataraja. One temple is dedicated to Shitlamata – the goddess of Chicken Pox, whose vehicle is a donkey and she holds the broom in one hand and Neem leaves in another. Other temples are in various states of ruins, but they all look beautiful even now.

It is said that originally there were 108 shrines on these steps. It is difficult to count how many of them remain, but they are just simply beautiful. The geometry of the formations is breathtaking. 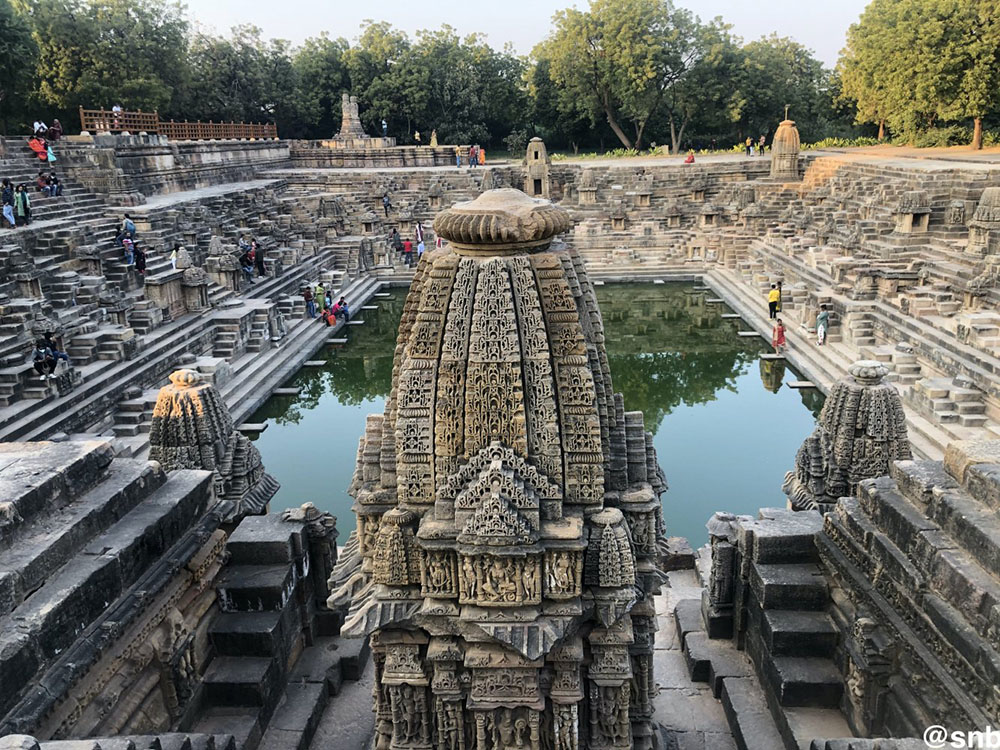 There is a legend associated with the Kund. According to Skanda Purana and Brahma Purana, it is said that when Ram was coming back from Sri Lanka after killing Ravana, he wanted to do absolve himself of the sin of killing a Brahmin, because Ravana was a Brahmin.

He asked Vashishth Muni to show him a place where he can do the same and the sage pointed him to Dharmaranya – or the forest of the Dharma. Rama performed his Yagna here and established a village called Sitapur.

Sitapur is the village that came to be known as Modhera later. It translates to a mound of the dead, probably because this place has seen layers of civilization, one upon the other. Another legend says this Modhera got its name from the Modh community of Brahmins who helped Rama perform his Yagna here.

This Temple was built during the reign of Bhima I of the Chalukyas. However, exactly when it was constructed – that cannot be ascertained with certainty. An inscription has been found in the temple complex mentioning “Vikram Samvat 1083” in the Devnagari script which corresponds to 1026-1027 CE.

References of any other date have not been found either in the temple complex or in any other record. Therefore, based on the said inscription, some historians have formed an opinion that this temple was built in 1026-27 CE.

Given that Mahmud of Ghazni had invaded Bhima I’s kingdom in 1024-25 CE and Bhima I, with his 20,000 soldiers, tried to stall the progress of Mahmud at Modhera albeit unsuccessfully, these historians believe that this temple was built to commemorate the defense of Bhima I. However, there is a contrary view too.

The said inscription has been found on a wall in an upside-down position. This strange position of the inscription gives a feeling that this temple was sacked at some point in time. That’s why some historians are of the view that the year 1026-27, mentioned in the inscription, is not the year of construction.

It is rather the year of the sacking of the temple by Mahmud. As per them, based on the stylistic ground, the Surya Kund/Rama Kund with corner shrines were built first at the beginning of the 11th century.

Once Mahmud went back and Bhima I returned to the power, the temple proper, the miniature, and the niche shrines in the tank were built.

The Sabhamandapa/Nrityamandapa was added much later in the third quarter of the 12th century along with the gateways, the porch of the temple proper, and the doorframes of the temple and the cella during the reign of the Karna, son of Bhima I.

We came out of the temple complex around 6.10 pm. There was a small museum within the complex but we had to give it a pass given the paucity of time. From there, we came back to Modhera village and took a tea break at a roadside stall.

We bought few water bottles and cold drinks too. By the time, we resumed our return journey for Kensville Golf and Country Club Resort, it was well past 6.30 pm.

While returning, we took Route 1 mentioned in the previous post and realized during the course of the journey that it was a wise decision not to take this route in the morning.

The entire stretch was made of State Highways which were of much inferior quality compared to that of traveling in the first half of the day. There was no decent family food joint in the entire route. We reached the resort after ‘not so enjoyable’ of around 2 hours.

On the next day, our destination was Sasan Gir. On the way, after crossing Rajkot, we were to take a small detour for Khmbalida Buddhist Cave. Please click on the link above to continue reading the next part of the travelogue.

I hope the travelogue, pictures, and information on Modhera Sun Temple were of help. If you have any questions, please feel free to ask in the comments section below or at our Community Forum, and I will be happy to answer.