We slept quite early the previous night. So, I got up a bit early, around 5.30 am, and came out to the terrace. It was quite cold outside. It was pitch dark too. The moon was glowing profusely on the western sky. The original plan for the day was to go to Junagadh in the first half of the day to see the historical attractions there and to go to Somnath temple from there in the second half of the day.

So, there was no hurry in the morning. We went for a round in the Club Mahindra property and spent the rest of the morning sitting on the terrace with hot coffee and tea. Like yesterday, it was also a clod, breezy but sunny morning.

After having lunch at the resort, we started for Somnath around 2.30 pm.

Typically, people go to Somnath for pilgrimage. The site of Somnath has been a pilgrimage site from ancient times on account of being a Triveni Sangam – the confluence of three rivers: Kapila, Hiran, and the mythical Saraswati.

The name of the town Prabhas, meaning luster, as well as the alternative names Someshvar and Somnath (“the lord of the moon” or “the moon god”), arise from this tradition. It is believed that the Shivalinga in Somnath is one of the 12 jyotirlingas in India, where Shiva is believed to have appeared as a fiery column of light.

However, Somnath does have few ancient Buddhist caves and Hindu temples. So, our plan was to see those ancient caves and temples first and then finish the day with Somnath darshan.

We reached the first destination of the day, the Buddhist caves of Prabhas Patan at 4 pm. There were two caves facing each other with a small courtyard separating them.

There was no lighting there as well as there was no other person in the vicinity. So, we decided not to venture inside caves and kept ourselves restricted to taking few photos from the outside. 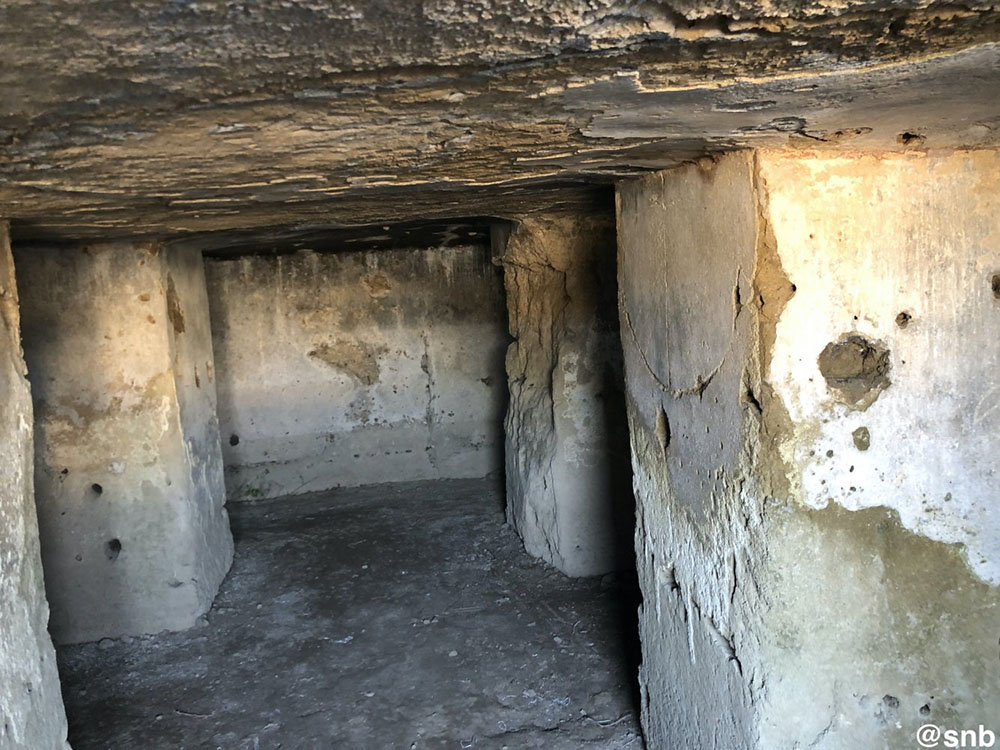 Those two caves used to be a part of the Buddhist vihara in the 3rd and 4th centuries CE.

The next destination was Suraj Mandir near Triveni Sangam. The temple was a few hundred meters away from the main road. Since the temple was a practicing temple, the walking path was well-paved and there were shops on both sides of the path.

When we went to the temple, it was 4.15 pm. Therefore, there was absolutely no crowd and most of the shops were closed.

The temple was on an elevated plain and we had to climb up around 20 stairs to reach the open platform in front of the entrance of the temple. 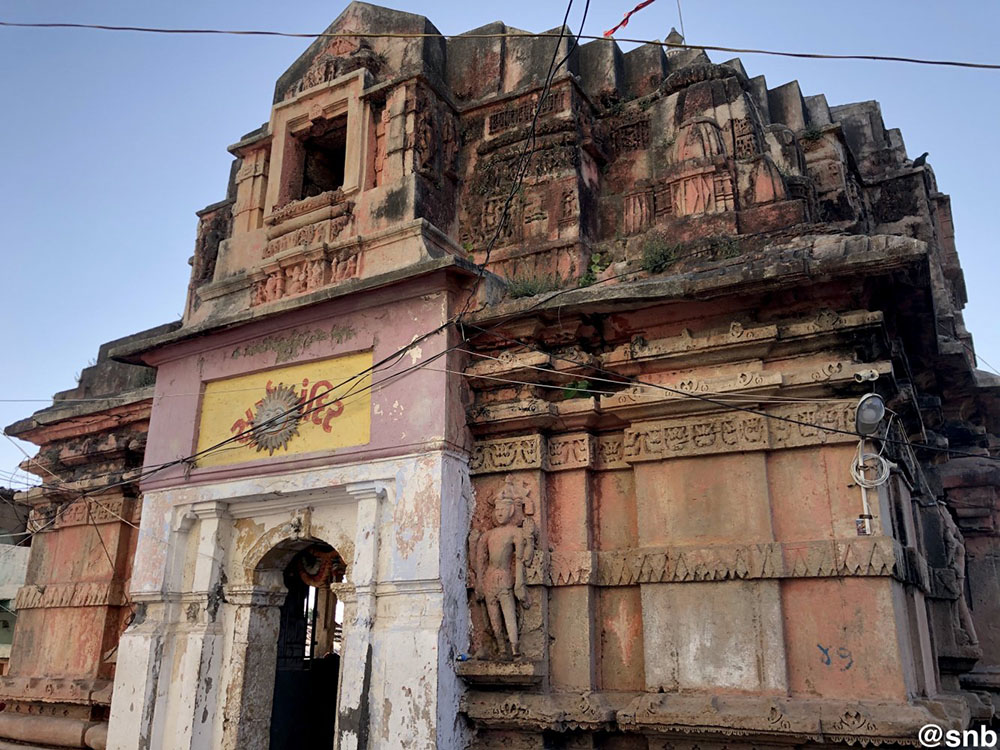 When we reached there, the priest was sitting outside and having some casual chat with a local. Seeing us, he went inside. We followed him.

While following him, I asked him about the antiquity of the temple. He did not reply. After entering Garbhagriha, he gave us some ‘prasad’ and put ‘tilaks’ on our foreheads. Then he replied to my question. According to him, this temple was built 5000 years back by the Pandavas and it was built overnight.

What the priest said was essentially the legend associated with this temple. There is no historical information available about the age of the temple. From the look, it appeared that the temple was quite old and it was in a bit dilapidated condition. 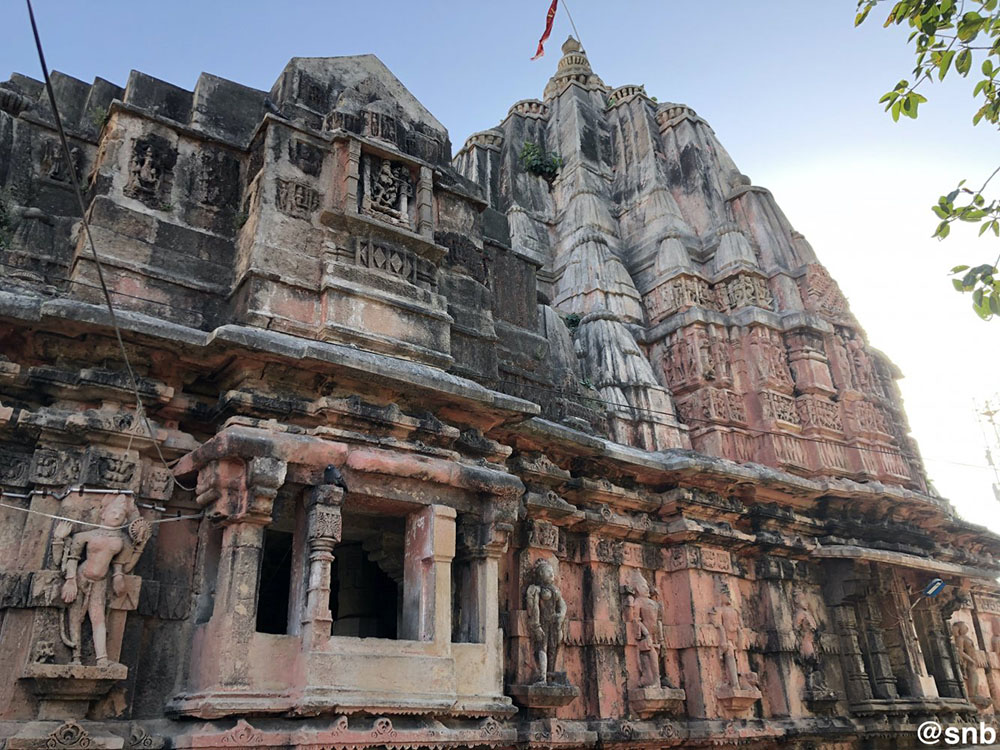 The temple consisted of a Garbhagriha, Pradakshina Path, and Antarala. The Pradakshina Path had three niches. There were sculptures on the inner wall of the Antarala in a partially ruined condition. The outside of the temple wall was also carved. There were depictions of elephants, lions, and various other birds and animals.

Sculptures on the column of Antarala 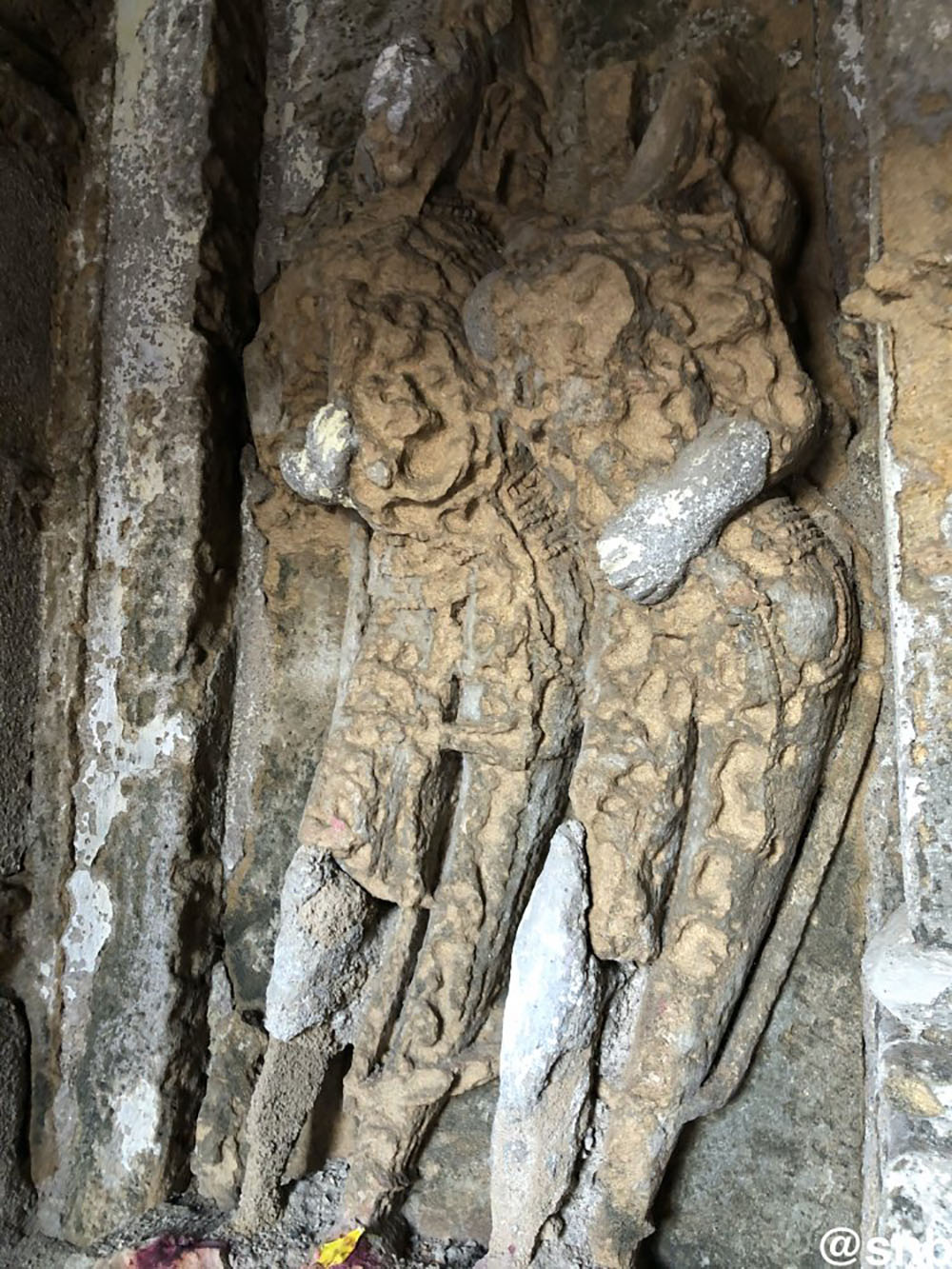 Sculptures on the outside wall of the temple 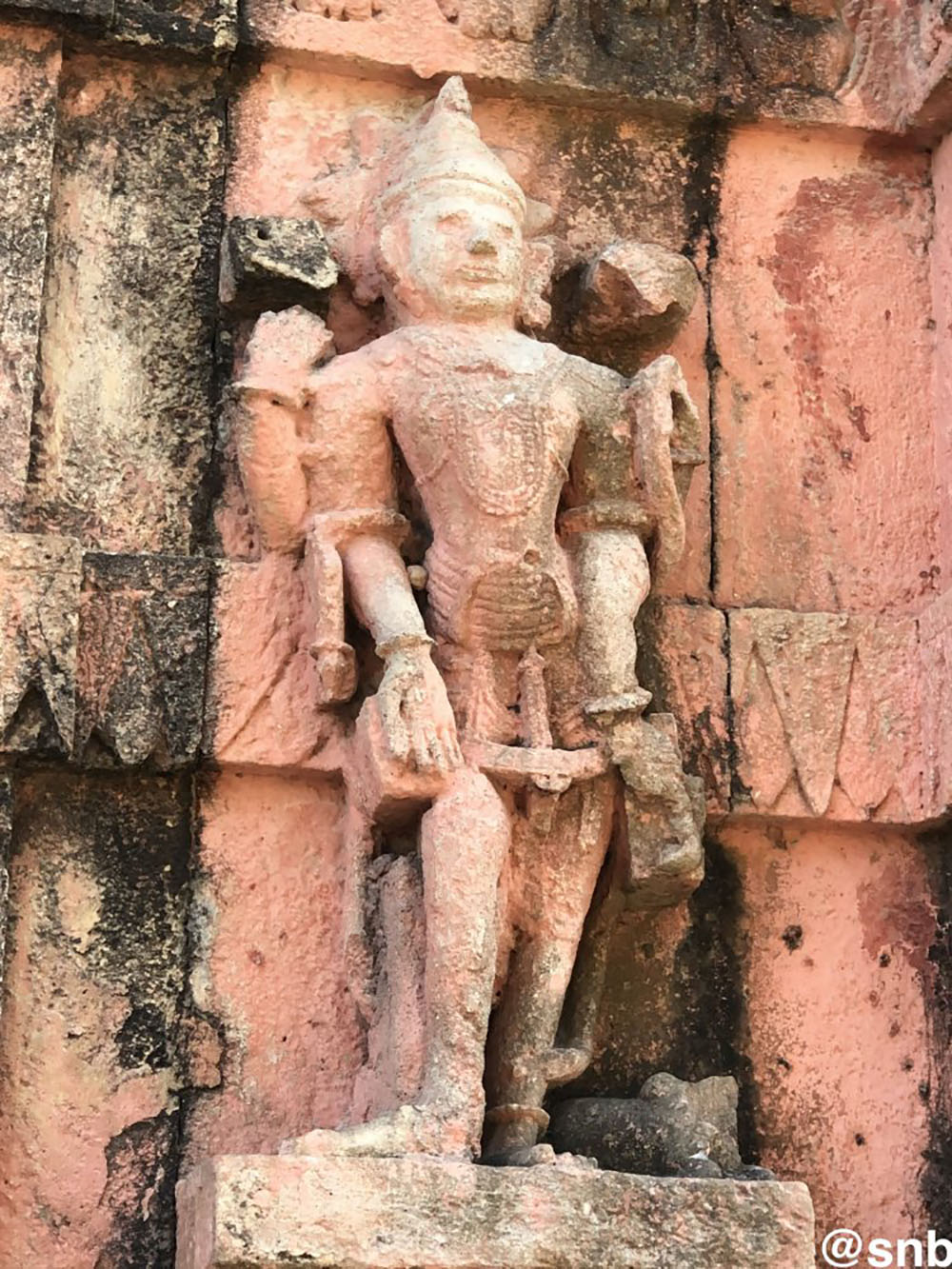 There was a small sacred water body, the Surya Kund within the temple premises. 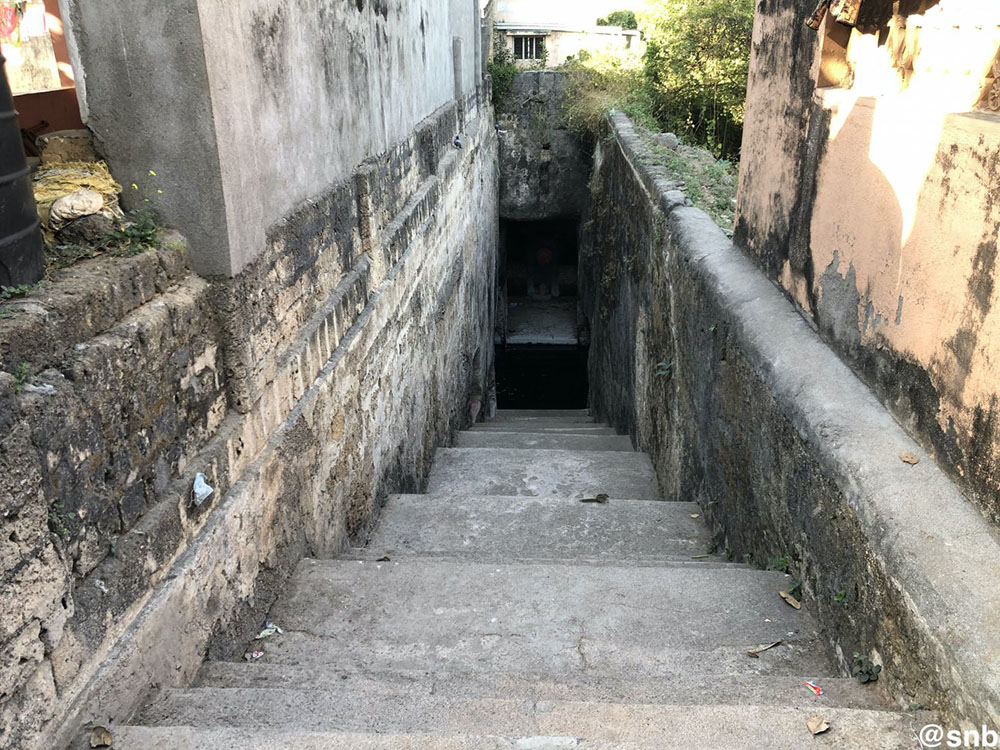 Adjacent to the Suraj Mandir, there was Panch Pandava Gufa, also known as Hinglaj Mata Mandir. It was discovered by the late Baba Narayandas in the year 1949.

According to Mythological tales, the Pandavas worshipped Maa Hingalaj here, during their exile. The cave has a temple dedicated to the Pandava brothers. There are also shrines in honor of Shiva, Sita Ma, Ram-Laxman, Lord Hanuman, and Goddess Durga.

The entrance of the cave was very narrow and low. There were two levels in the cave. We had to bend down and crawl down the steps in a backward direction to reach the first level.

The height of the first level was enough to stand. We had to again crawl down in a backward direction to reach the second level. The deity of Hinglaj Mata was on the second level two. It was not possible to stand at the second level. You have to offer prayer sitting only and crawl for moving.

The first level of the Panch Pandav Gufa 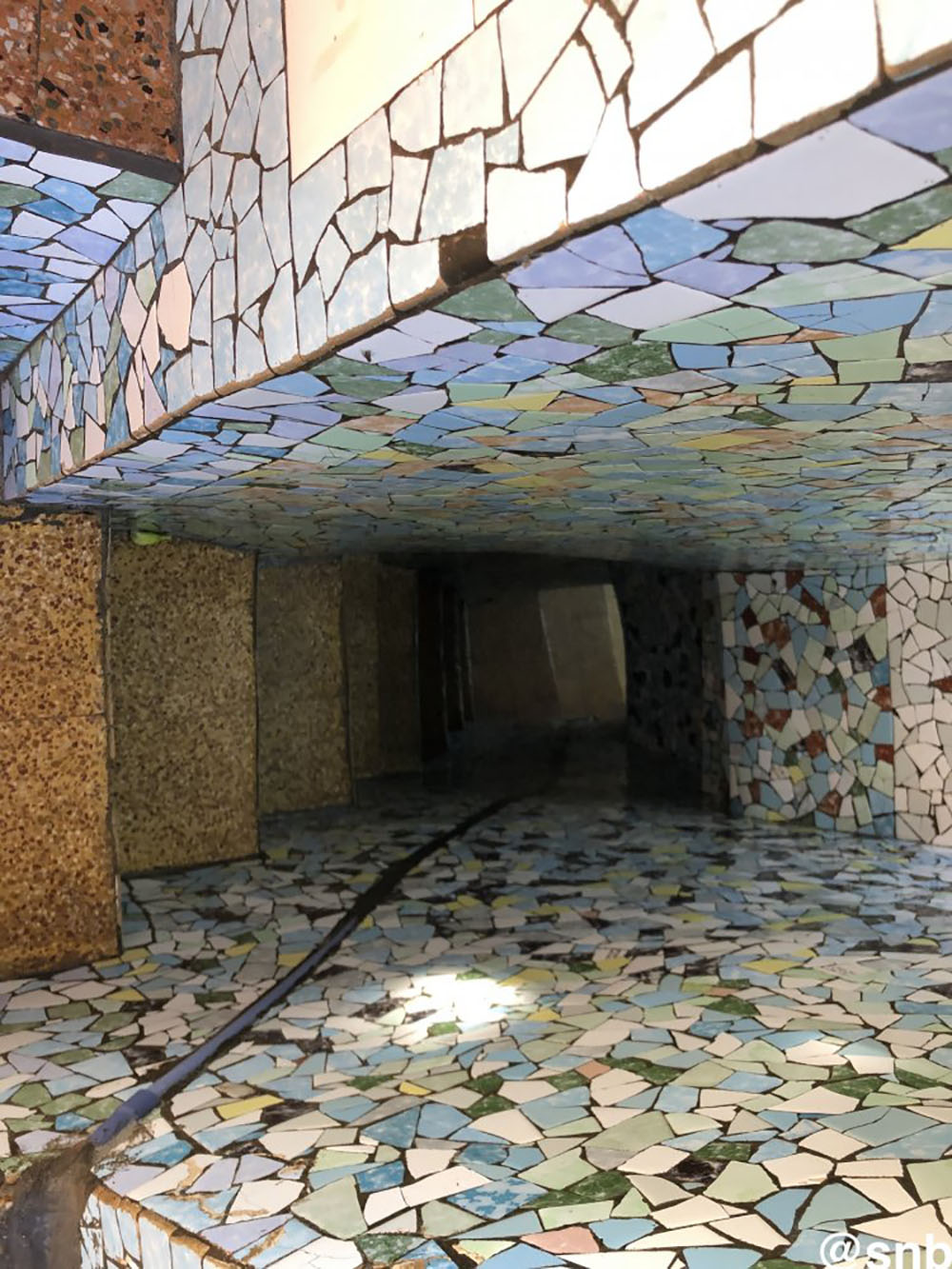 After visiting Suraj Mandir and Pancha Pandava Gufa, we resumed our journey towards Sangam and reached there within few minutes. However, we could not locate any Ghat and therefore continued our drive.

After some time, the road came to an end and there was a temple with a crowd. We decided not to go to that temple and took a U-turn for Somnath Jyotirlinga temple. 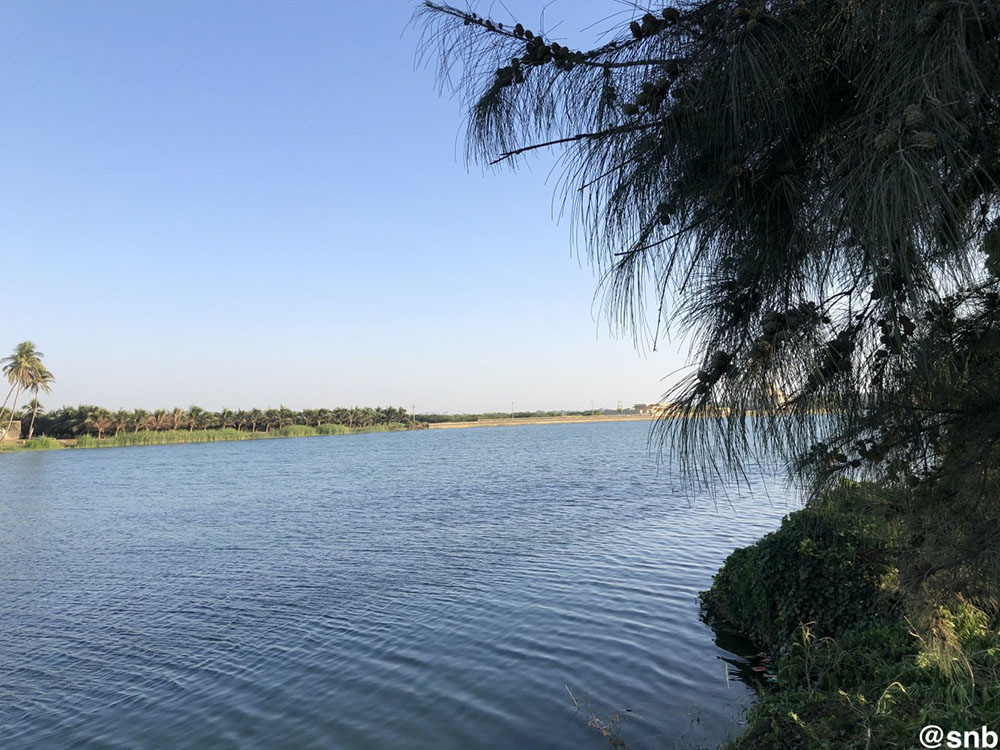 Somnath temple complex was heavily guarded with multiple security checks. The parking lot was at a distance. After keeping our vehicle there, we first went to the adjacent locality by walking to see another ancient temple – Daitya Sudan Mandir.

But the temple was closed at that time and was supposed to open at 7 pm. So, we came back to Somnath temple, and then we realized that mobile, cameras, wallets, handbag, etc. were not allowed inside the temple. We came back to the parking lot and kept all that stuff in the vehicle and returned to the complex for darshan.

The history of the Somnath Jyotirling temple is quite controversial. According to popular tradition, the first Shiva temple at Somnath is believed to have been built at some unknown time in the past.

The second temple is said to have been built at the same site by the “Yadava kings” of Vallabhi around 649 CE. Subsequently, this temple was looted, desecrated, and destroyed multiple times by invaders, Delhi and Gujarat sultanate, and reconstructed by neighboring Hindu Kings.

The last destruction of the temple happened in the hands of the Mughal emperor Aurangzeb in 1665 CE.

The present temple was constructed after independence for which the installation ceremony took place in May 1951. It was built in the Solanki style of temple architecture.

We spent around 30 minutes in the temple complex. Since mobile or camera was not allowed, I managed to take only one photo of the temple from a distance before keeping the same in the vehicle. 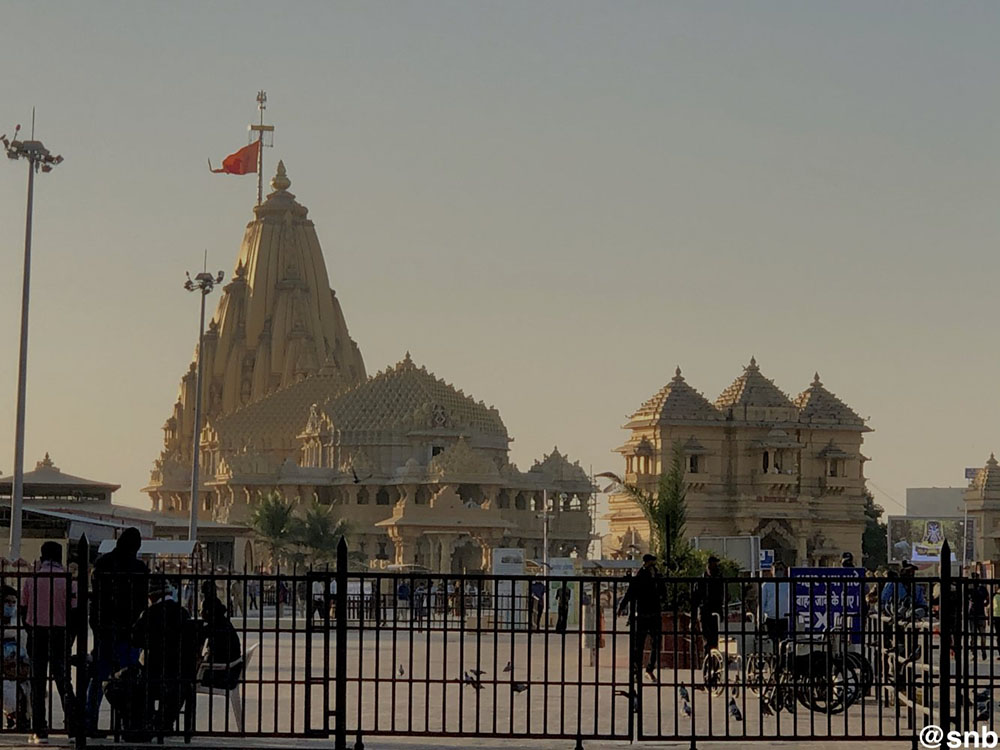 We started our return journey for Club Mahindra Gir around 6.15 pm and took a tea/coffee break at a restaurant named ‘Hotel Namaste’ around 7.30 pm.

We reached the resort around 8.30 pm. Please click on the link above to continue reading the next part of the travelogue.

I hope the travelogue, pictures, and information on Somnath Temple were of help. If you have any questions, please feel free to ask in the comments section below or at our Community Forum, and I will be happy to answer.