This post is in continuation with a previous one and a part of my Gujarat road trip log. After arriving in Champanaer, we spent some time exploring Shaher ki Masjid and Jami Masjid before moving on to Pavghad Hills to visit Kalika Mata temple. To read the previous part of the travelogue, please click on the link below.

We were driving from Vadodara to Champaner. At Halol , we took the bypass and then drove back to the main road again. In a short while, we crossed an old gate. We had more or less reached Champaner.

After crossing that gate, we drove for another 10 minutes and reached a market. There was a fort wall on our left with an entry point, wide enough for a vehicular entry. But we were not sure whether the vehicle was being allowed inside and even, if yes, what was there inside.

So, we got down there and asked a shop owner how to reach Jami Masjid since that was the main attraction of Champaner. He asked us whether we were tourists and whether we had our vehicle. On getting an affirmative answer, he advised us to enter that fort compound and assured us that vehicular entry was allowed.

There would be the Shaher ki Masjid as well as a ticket counter. From the ticket counter, we would have to buy a combined ticket for Shaher Ki Masjid and Jami Masjid.

After visiting Shaher Ki Masjid, we would have to come back to the main road and continue our journey in the same direction and would have to take a left turn from where the wall ended to reach Jami Masjid.

He further added that Jami Masjid could be reached from Shaher Ki Masjid using the roads inside the fort too.

As per his advice, we entered through the gate. 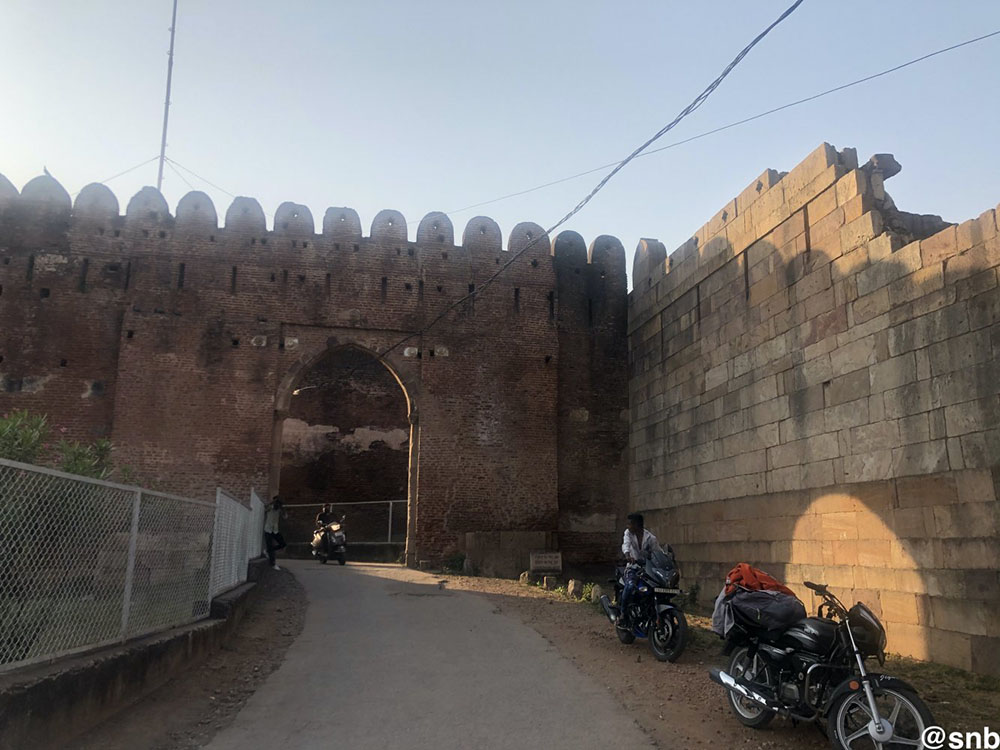 Immediately after the entry, we saw a board with Shaher Ki Masjid written on that. The adjacent parking lot was quite spacious with 3-4 cars already parked there. The ticket counter was there only. The name is also spelled as Saher ki Masjid or Shehar ki Masjid.

On reaching the counter, we were informed that because of Covid related restrictions, no tickets were being issued across the counter. We should have booked tickets online before coming here. That was the prevailing norm for all ASI-maintained monuments.

Looking at our reaction of despair, the gatekeeper became sympathetic to our plight and came forward to help us out. He showed us a link on the signboard and told us to buy tickets using that link.

He helped us also to navigate through the site. After 4-5 minutes’ effort, we managed to book the ticket and entered the ‘Saher ki Masjid’ compound. The ticket price was Rs. 40 per person which was valid for Jami Masjid too. 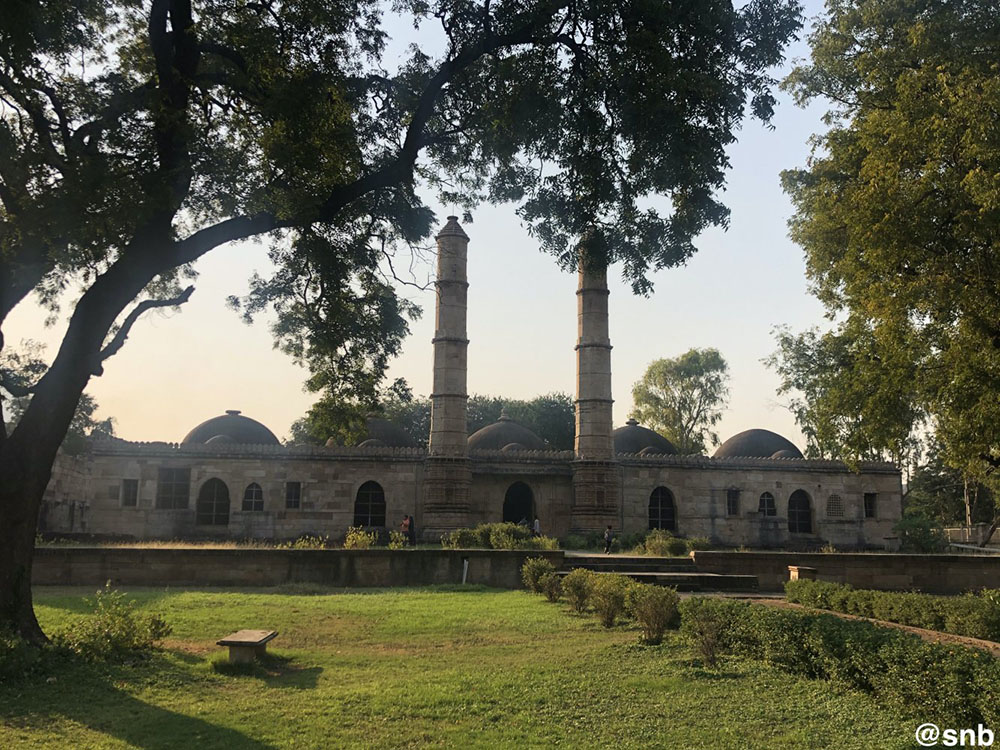 This very large and imposing masjid was constructed for the exclusive use of the Sultans. It has five mihrabs. At the front, the entrance has an arched doorway with a large dome, with smaller domes at the four sides and minarets on either side embellished with a projection which is inclined chhajja.

The other two openings flanking the central doorway are embellished with jharokhas. A rectangular ablution tank is seen on the platform.

We started from there around 4.40 pm and, following the guidance given by the shop owner, we were at Jami Masjid by 4.45 pm.

It is located about 150 feet (46 m) east of the city walls (Jahdnpandh). It dates to 1513. This mosque is a place of pilgrimage for those who seek blessings from the pir who is buried in one corner of the mosque gardens.

The two impressive towers at the entrance of the masjid and the fine blend of Hindu and Islamic architecture are stated to constitute a fine model of “symmetrical composition, the perfection of details and decorative beauty particularly intricately carved ceiling of the prayer hall.” 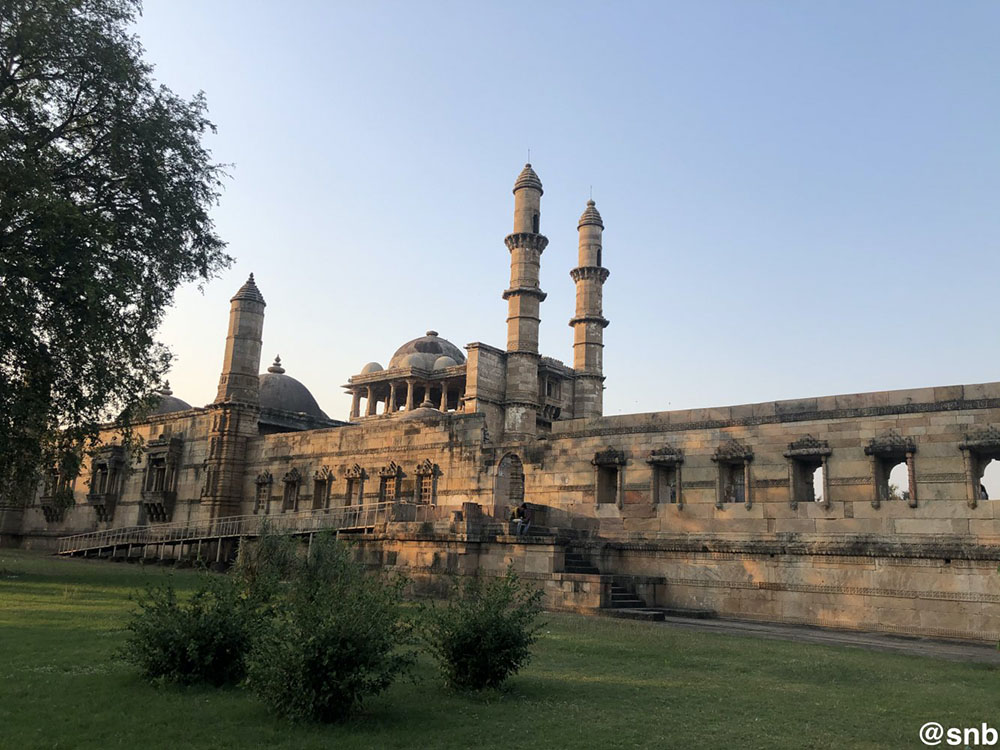 The building is double-storied, with both Islamic and Hindu styles of decoration. Its plan is similar to that of the Sidi Saiyyed Mosque in Ahmedabad. It is rectangular with an entrance on the east side. There is a portico that has a large dome built over a podium.

There are steps to the mosque from northern and southern directions. Towering minarets, 30 meters (98 ft) in height, are situated on both sides of the main carved entrance. There are two floors of an open arcade with decorative carvings and jaali over the courtyard with pillars. The two minarets at the entrance are octagonal.

The prayer hall has eleven domes with the central dome, a double-storied structure, built on pillars in an arcade form. A typical Gujarat style of architecture is seen in the form of oriel windows with distinctive carvings on the outer surface. An ablution tank of octagonal kund appearance was used for rainwater harvesting and washing before prayer.

The carved roof contains several domes. The courtyard is large. There are seven mihrabs. The entrance gates are carved and fitted with fine stone jalis. This mosque had three oblong mural plaques, one at the top of the pulpit and the other two on the sides, with engravings of hymns from the Quran. 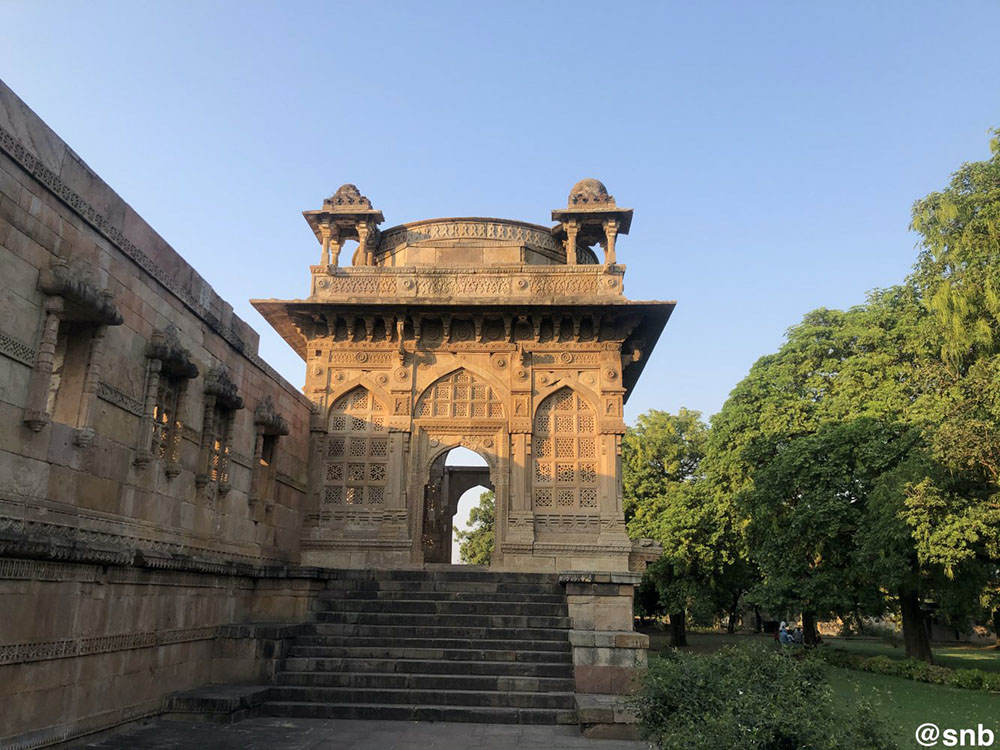 View of outside from the eastern entrance porch 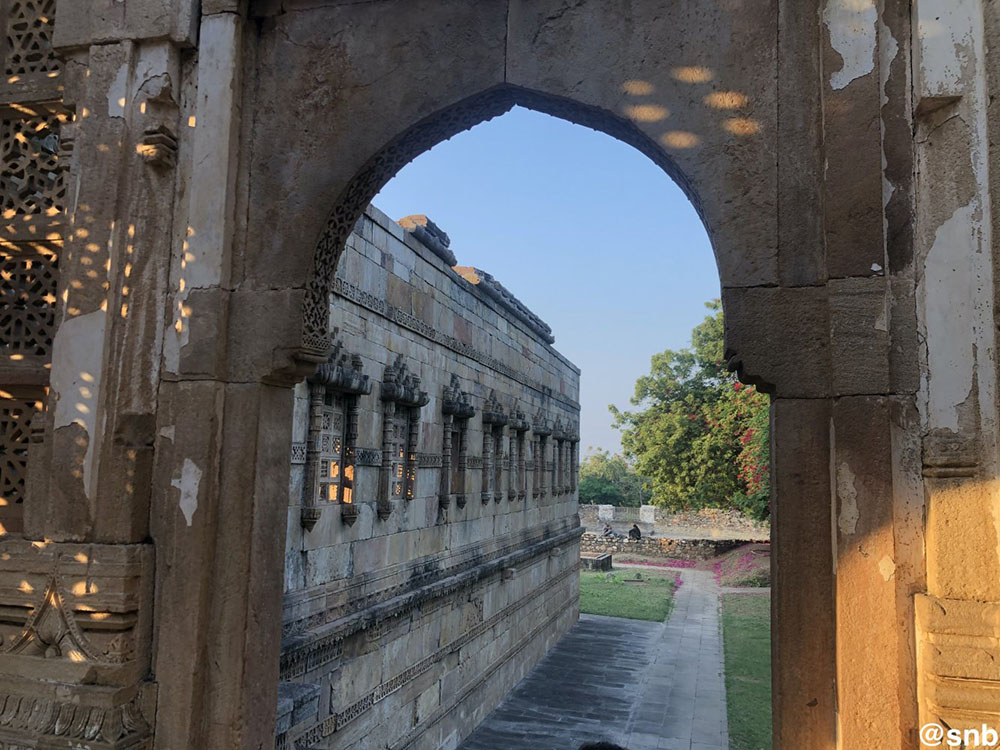 ​Eastern entrance porch as seen from the inside of the compound 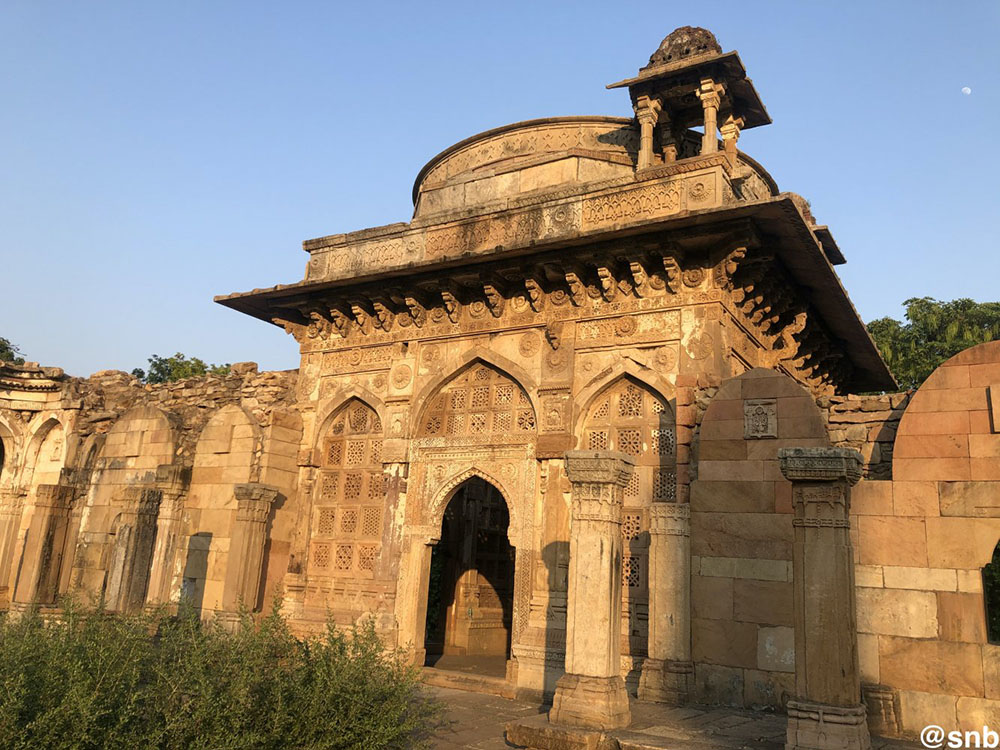 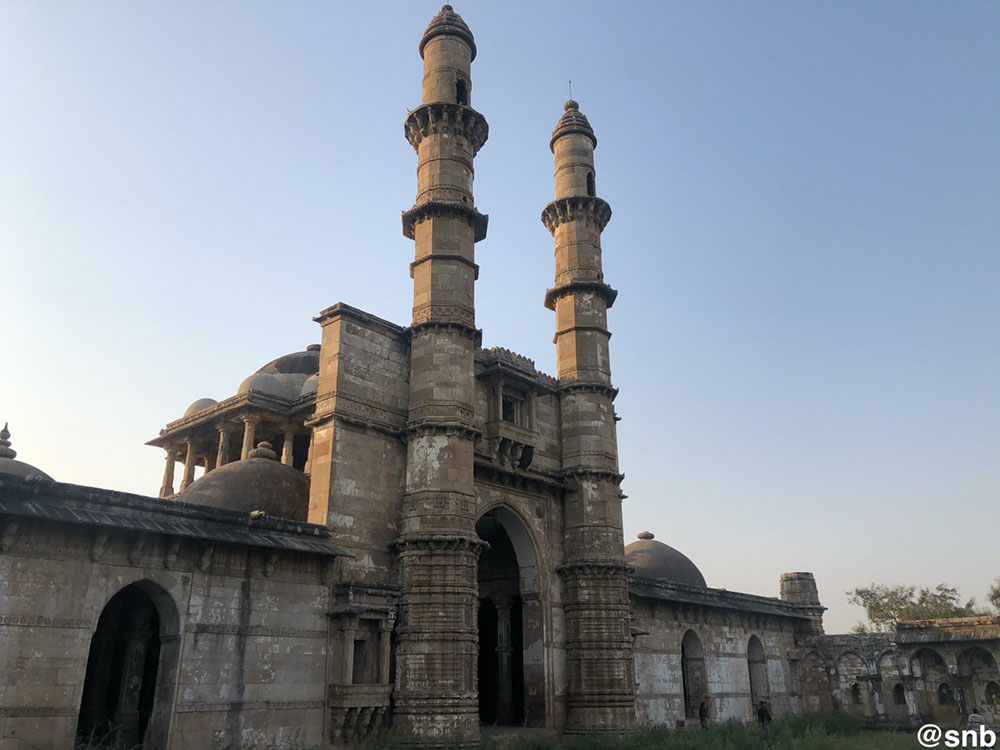 Inside of the main mosque 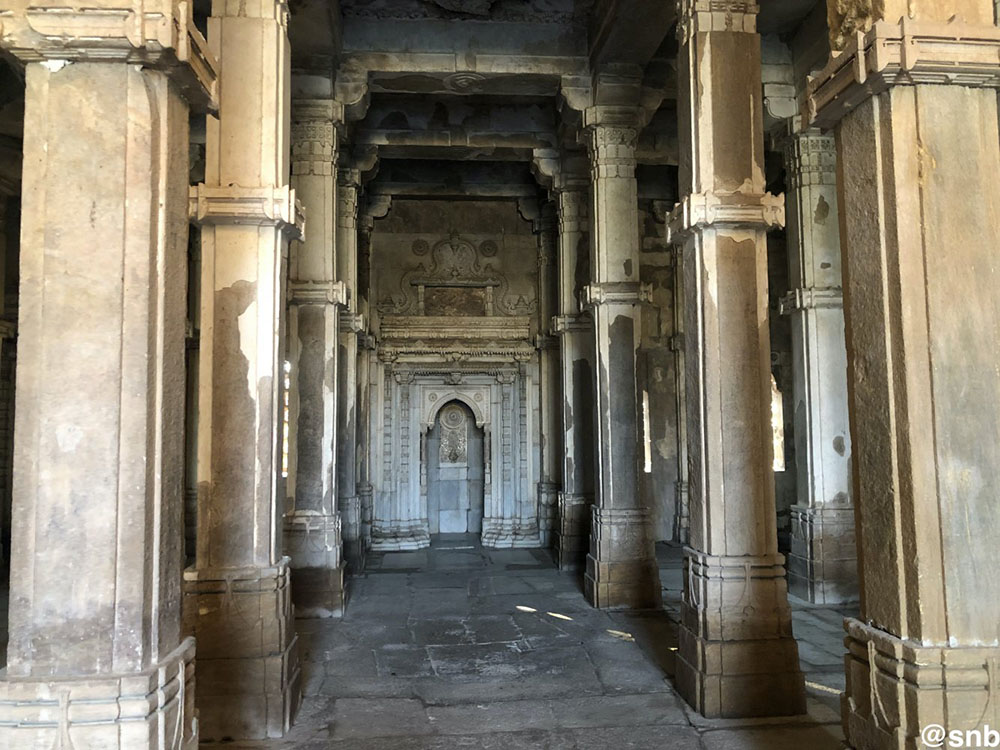 We were out of the Jami Masjid by 5.05 pm and we decided to go to Pavagad hill. That was the third mistake of the day. Please read Pavagadh Hills & Kalika Mata Temple to continue reading the next part of this travelogue.

I hope the travelogue, pictures, and information on Shaher ki Masjid and Jami Masjid were of help. If you have any questions, please feel free to ask in the comments section below or at our Community Forum, and I will be happy to answer.