Kargil to Srinagar by Road via Dras, Zojila and Sonamarg

This article is in continuation of a previous one and a part of my Ladakh and Zanskar Travelogue. The post below provides a detailed log of Day 14 of our trip as we drove back from Karil to Srinagar by road, after spending 2 days in Zanskar Valley and a third in Kargil. To read the previous parts of the travelogue, please click on the links below.

Day 14 was a race against time. We had to reach the Tata service station in Srinagar by 4 pm at the latest to give them enough time to repair Kiyang. Being a Friday, we knew we were in a tight spot. If the car could not be repaired today, we would be stuck in Srinagar till Tuesday, for the next 3 days. So yet again we got up early and were on our way by 6:15 in the morning.

Day 14 – Kargil to Srinagar by Road

The first photo op was the Harka Bahadur Memorial, at the point which is probably the closest that the Srinagar-Leh highway gets to the LoC. Here, the mountain across the river IS the LoC. The Suru river meets the Dras river here to form the Shingo river which then flows into Pakistan.

We moved on, and were, for a while, accompanied by laden apricot trees on both sides of the road. As we approached Dras, we came across the relic of the five Buddhas, which we’d missed the last time. About 5 km before Dras, a signboard told us that to the left was some mythical stone that sounded pretty interesting.

We decided to take the detour but were unlucky. We did not find the relic, and to be frank, did not try very hard to find it either. The detour re-joined the main road, but by then we’d surpassed the War Memorial. 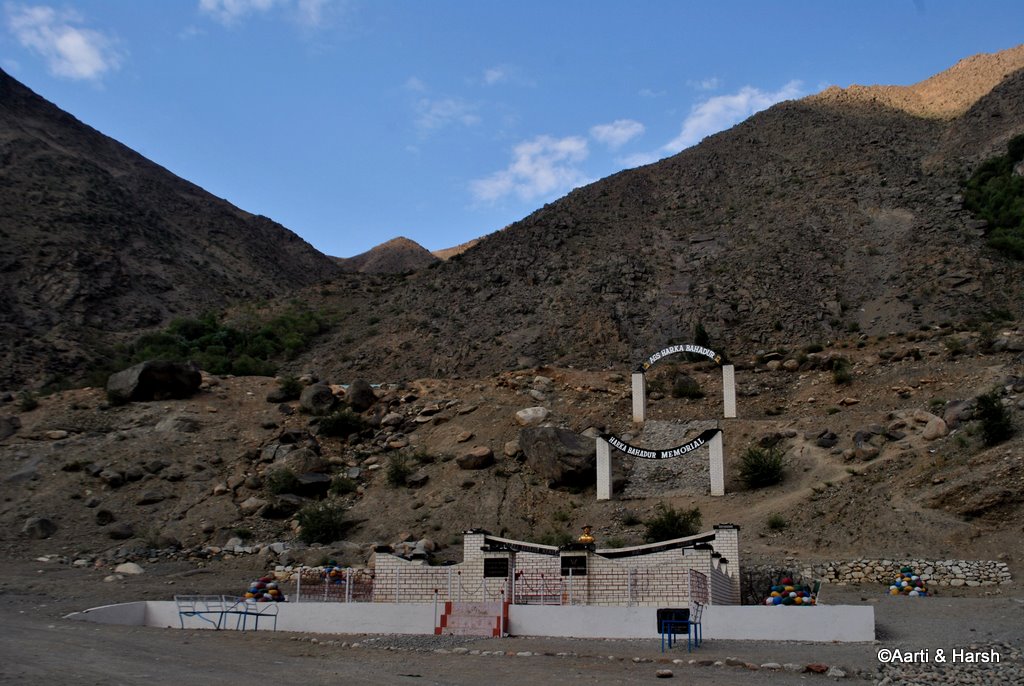 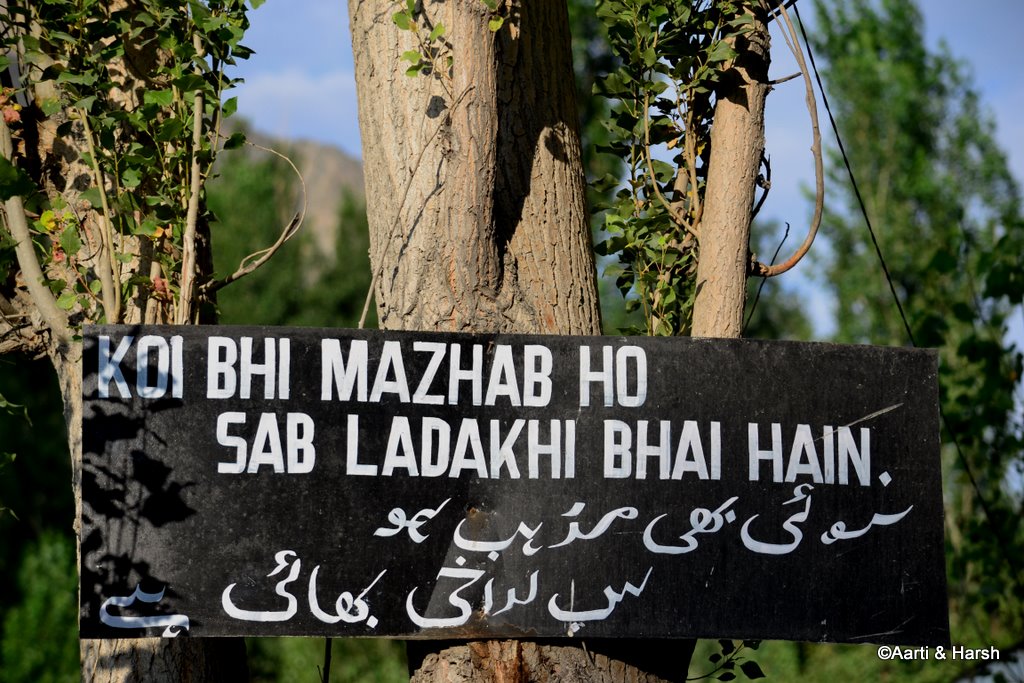 A mosque in a magnificent setting​ 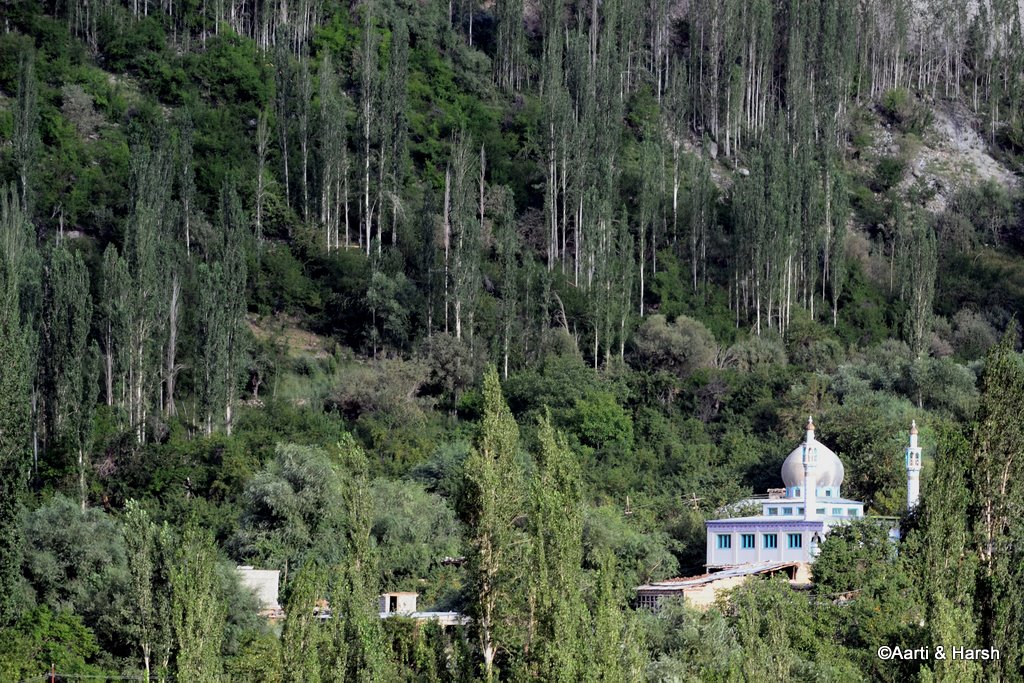 We thought of going back because we wanted to stop and pay our respect, but given that we were pressed for time, we decided to move on. At Dras, we stopped for a quick breakfast in a dhaba which had a direct view of Tiger Hill. Dras definitely gives rise to intense feelings of patriotism. 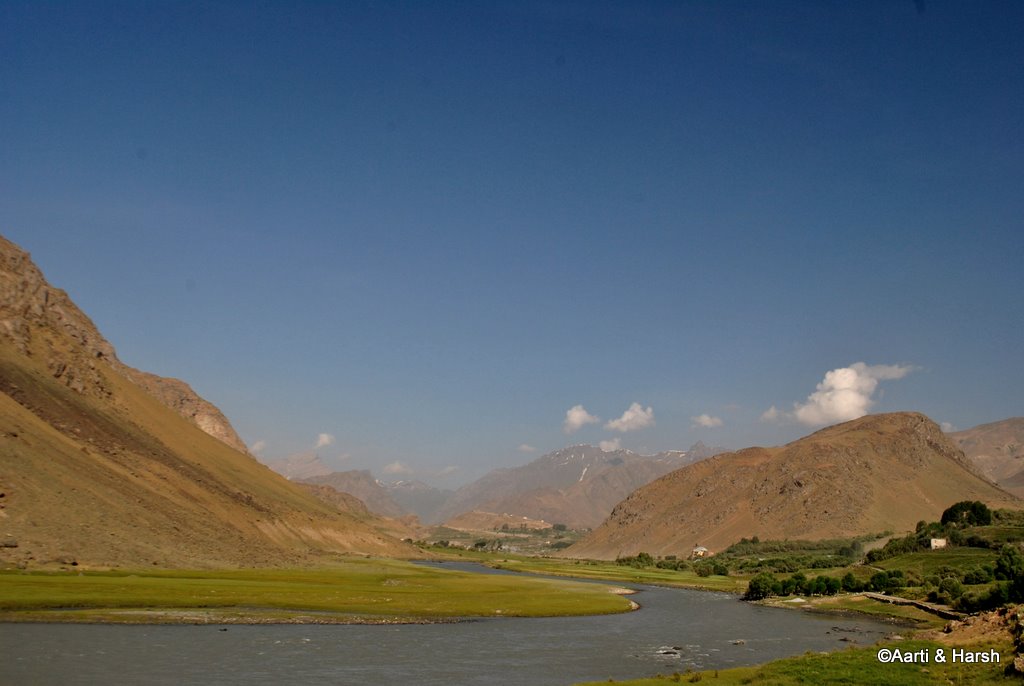 The relics of 5 Buddhas at Dras 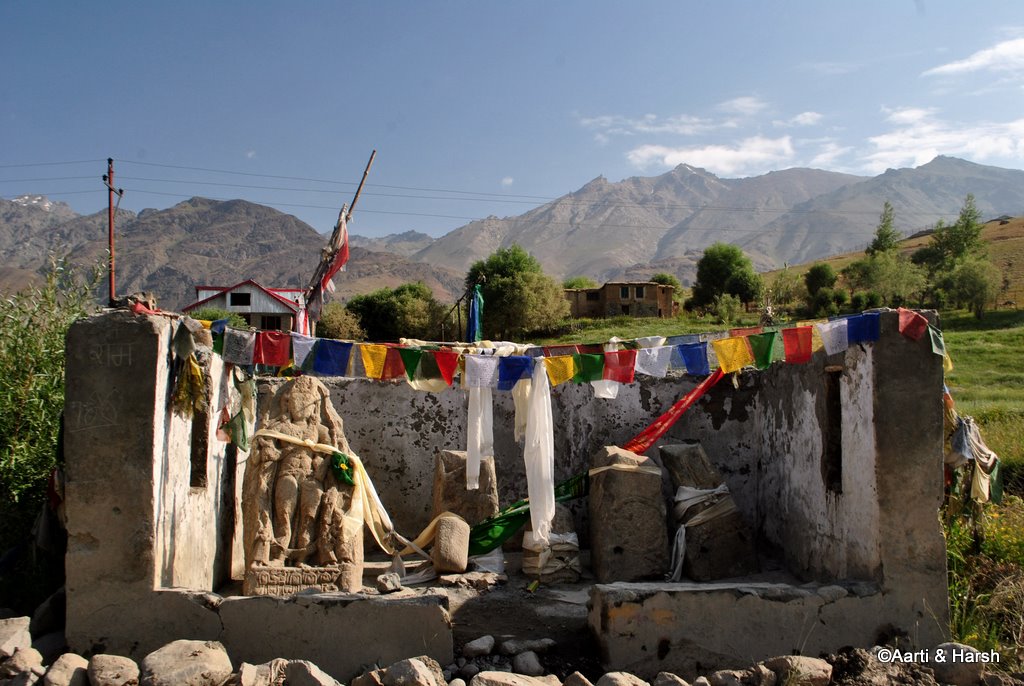 Tiger hill, wonder how they managed to scale it, despite all odds 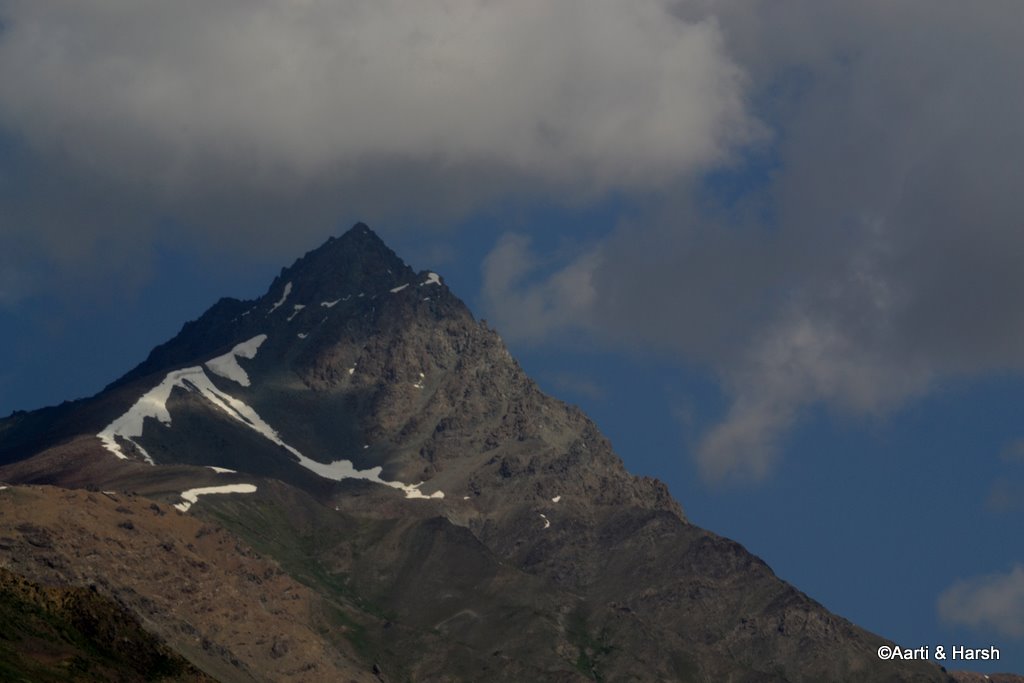 ​Immediately after Dras, we found the Dras – Umba La – Sankoo road and were again tempted to try it, but sadly we could not. As we moved on, we kept coming across memorials and stones dedicated to the soldiers who’d lost their lives in Operation Vijay and other operations over the years.

Another war memorial before Zozi La. You will see a few of them as you travel from Kargil to Srinagar by road. 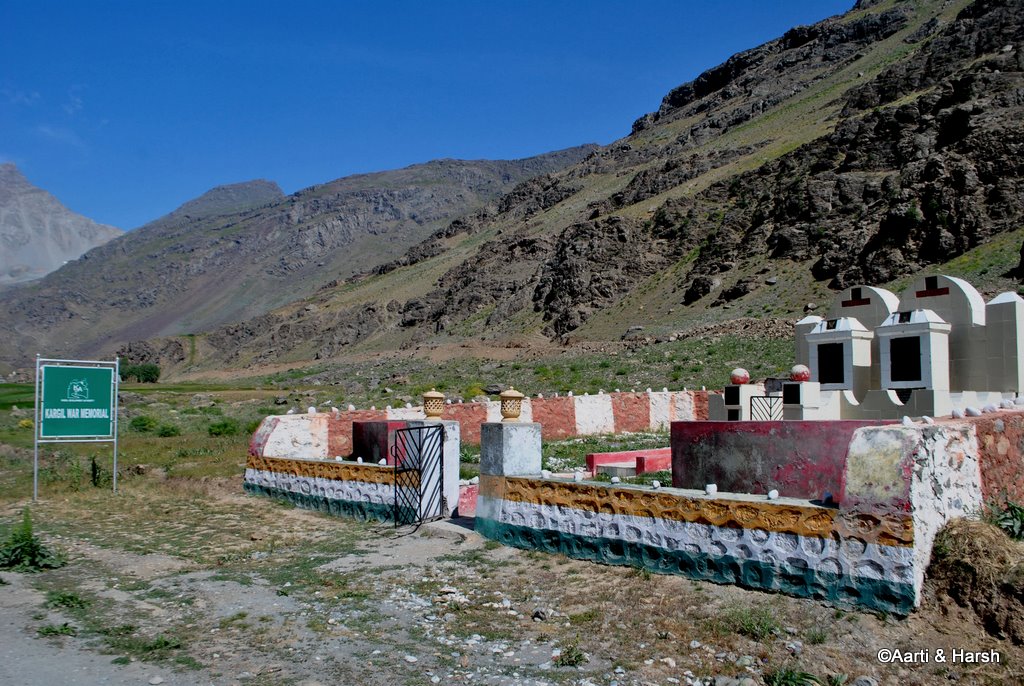 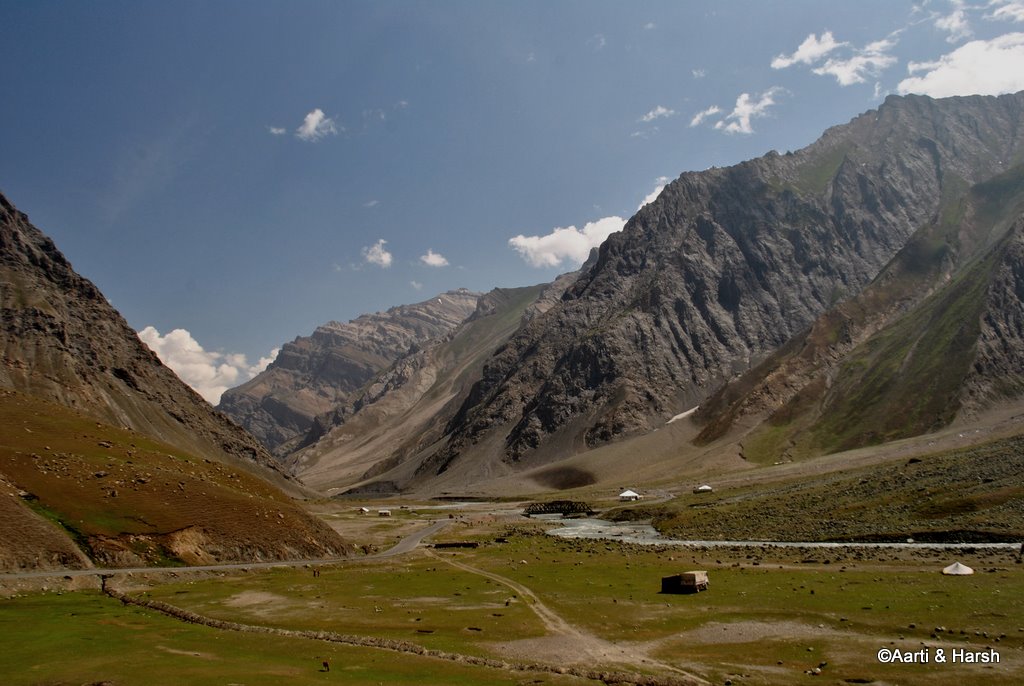 Thereafter, the climb to Zojila began. Just before the actual climb begins, there is a Sonamarg like meadow on the left known as Minimarg where one can always find a few horses grazing. The ascent to the pass wasn’t all that bad, and it took us about 40 minutes.

Also Read: How to Plan a Trip on Srinagar Leh Highway 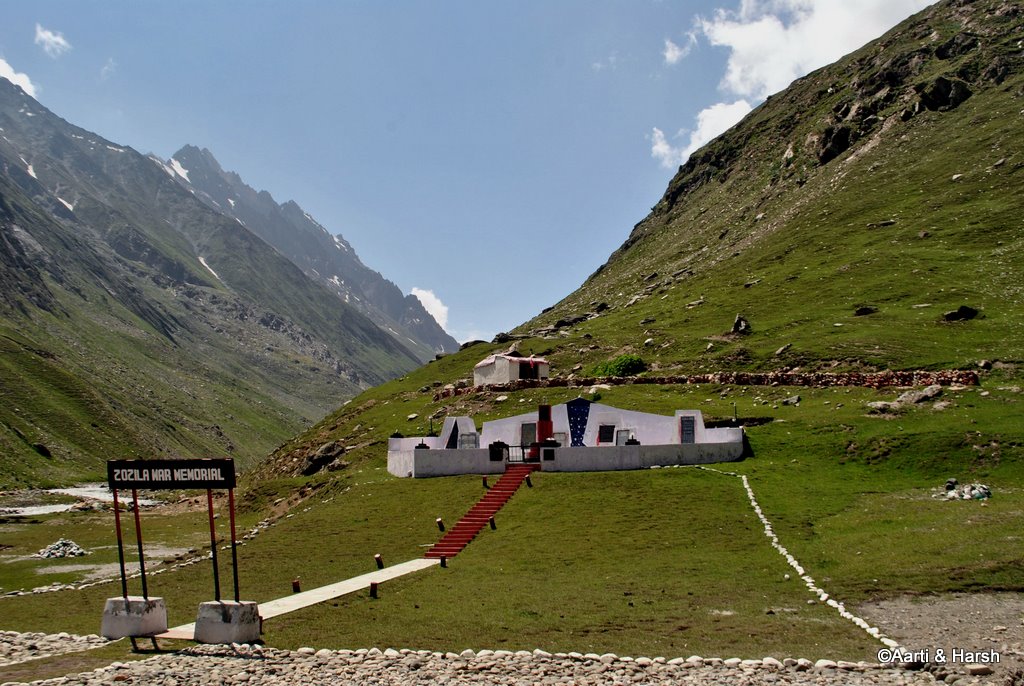 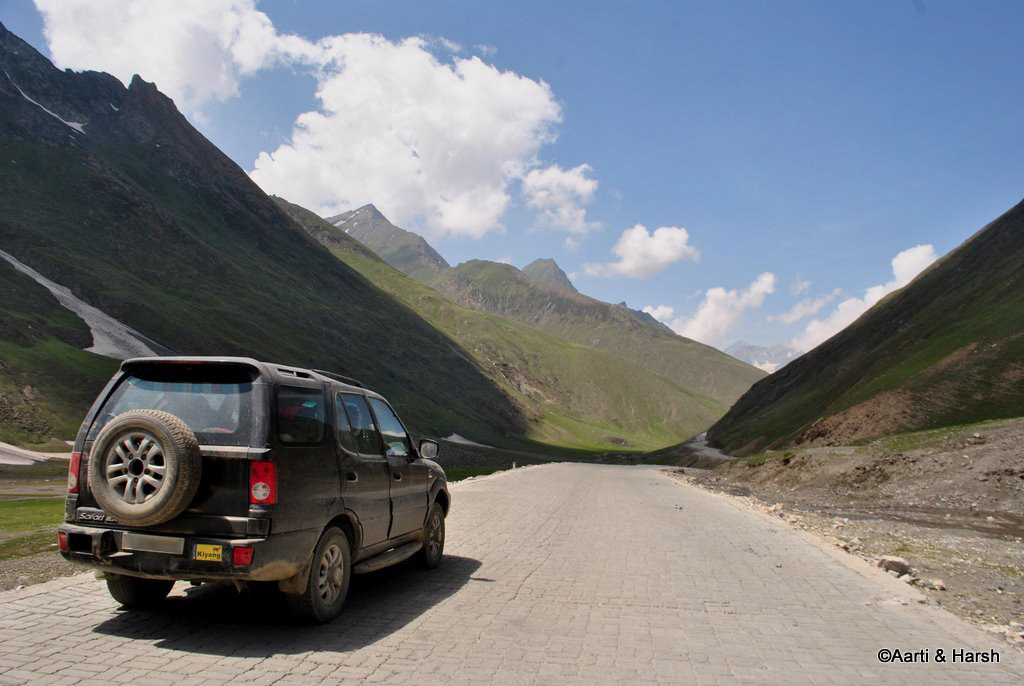 ​The road on the descent was good, and we soon caught a glimpse of the Amarnath madness below. The valley seemed to be made of tents of all colors, and instead of birds, we could see helicopters flying everywhere. If this was the situation in Baltal, we feared for Pahalgam, which is the main starting point of the yatra.

The madness that is Amarnath Yatra 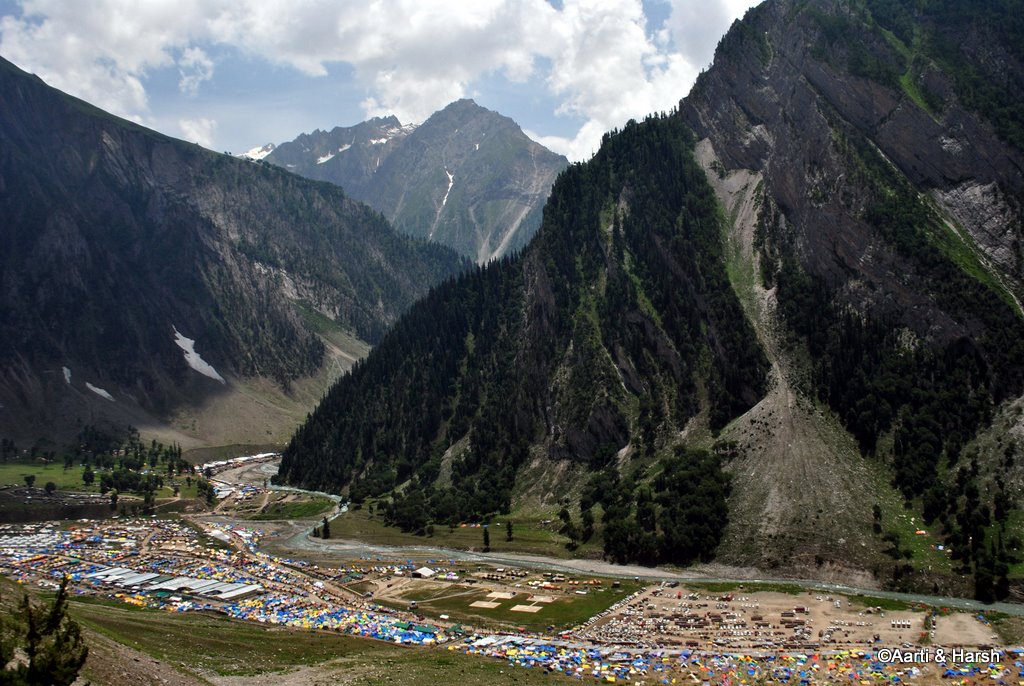 Halfway through the descent, we were stopped due to some work on the road being done. We spent a good 1-2 hours there, constantly worried that we would get late to reach the service station. At 1 pm, we were finally allowed to move on, and we rushed. The Sonamarg valley is very beautiful but the smell of horse shit there is so overwhelming that we dared not open the windows of our car. We were hungry, but Sonamarg was swarming with people, and we just could not bring ourselves to stop there for lunch.

On the way, we also came across the proposed starting point of the Zojila tunnel, and were quite excited at the prospect of another tunnel! Now that Rahul Gandhi says that its construction should be given top priority, it should be complete in another 6 – 7 years. 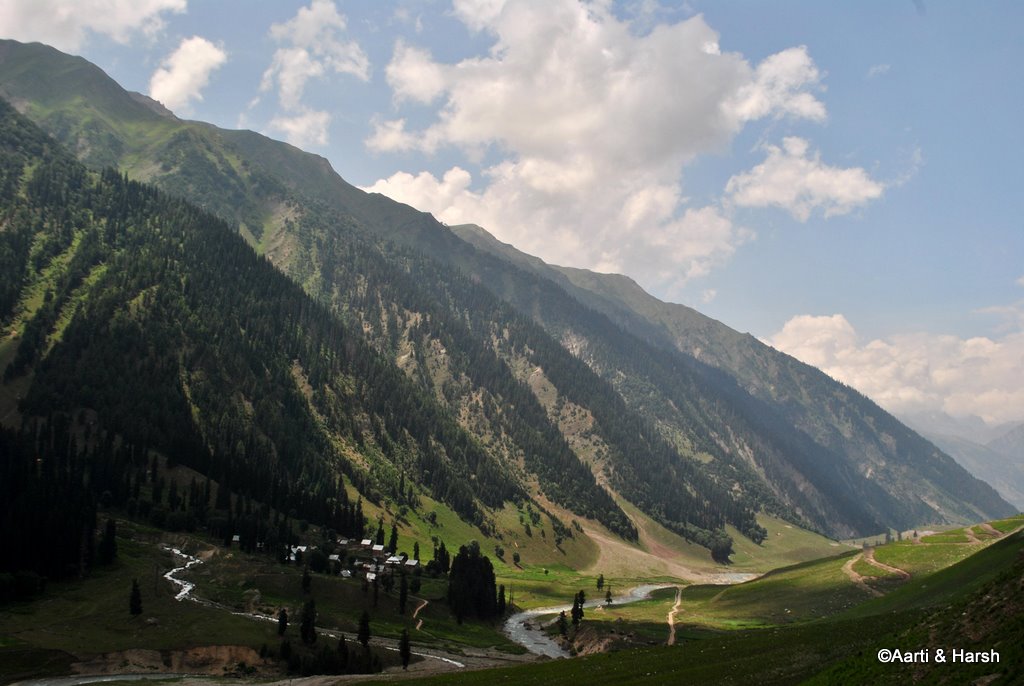 The entire road from Sonamarg to Srinagar was full of signboards welcoming the Amarnath pilgrims, and there was a crowd everywhere. So we did not stop for lunch, and just had some chips to wave over our hunger pangs. The road was good, and we cruised all the way.

At 4, we reached the Tata service station. The service manager immediately refused that he would not be able to help us at all citing his resource constraints. The next day the workshop was closed due to a planned Bandh call in Srinagar. Sunday the workshops were officially closed and he mentioned that he would be able to help us only by Monday. It was only after explaining our situation to him and that waiting till Monday was not an option for us, he relented to have a look.

Immediately after listening to all the problems going on for the past week, he came to the conclusion that the fuel quality can be the only issue. He did mention that in the past month a lot of cars were facing this issue in the region, especially on the Srinagar – Leh circuit.

He mentioned that as soon as we switch to good quality fuel the problem should go away. However, we did have a problem with a broken sedimenter sensor. The only solution to that was to change the sedimenter but he did not have a spare sensor with him.

The bloody thing costs about 4500 bucks, but we did not have an option. The change was not due for another 20,000km but we went for it nevertheless. Buying a new sedimenter, taking out the sensor, installing it and keeping the new sedimenter intact with the spares, so that the “new’ sedimenter could be used at it’s scheduled change.

So all in all the cash-flow was affected, but at least it was not an “expenditure”. With the new sedimenter and a trial run in which the manager himself took the car out for a spin and touched 140kmph, I was satisfied that the issue has been dealt with once and for all. At about 6:30 pm we headed towards main Srinagar to retire for the evening.

Once in Srinagar, we spent some time looking for a hotel and finally checked into Hotel Zamrud on the Boulevard. For dinner, we chose to go to Ahdoo’s, one of Srinagar’s oldest restaurants, and also our favorite there. The plan for the next day was to rest at Srinagar before giving a final push towards Delhi. We decided that Wular & Gulmarg should be worth our while to visit.

Journey Ahead: Sightseeing in Srinagar and The Journey Home

Kargil to Srinagar by Road – Conclusion

That marked the end of the 14th day of our that saw us driving from Kargil to Srinagar by road in a  hurry. The next day was spent sightseeing in Kashmir before we finally moved on to Delhi. Please click on the link above to continue reading the next part of the travelogue. If you have any questions, please feel free to ask in the comments section below or at our Community Forum, and I will be glad to answer.