Rangdum to Padum – The Beautiful Valley of Zanskar

This article is in continuation of a previous one and a part of my Ladakh and Zanskar Travelogue. The post below provides a detailed log of Day 10 of our trip as we drove from Rangdum to Padum. The plan was to spend the next 2 days in Padum itself, using it as a base to explore Zanskar Valley before moving on to Srinagar. To read the previous parts of the travelogue, please click on the links below.

Having gone to bed at 10 the previous night, we woke up early and promptly went to Tashi’s dhaba for breakfast as we’d promised. He was waiting for us and quickly made some omelets which we had with bread and cheese that we were carrying.

After a photoshoot with him, we said our goodbyes, although only temporarily as we promised that we’d be back for lunch on our return journey. We would’ve been on our way pretty soon but Aarti’s love for sheep made me wait for another 15 min or so, while she spent some time with them.

Moving on, we took the shortcut again through Suru’s basin and stopped for a moment to look at the memorial stone of the terrorist attack that happened a decade ago in the region. In the year 2000, terrorists had walked all the way from Kishtwar with the Bakarwals (Kashmiri shepherds) and had entered the Zanskar valley at Shafat.

They had then hijacked a lorry in which a German tourist was taking a lift, shot three monks of the Rangdum Gompa who tried to help the German, and then eventually also killed the tourist before disappearing. Ever since then, the Bakarwals are not welcome in the valley and there have been tensions between the two communities.

After crossing the Tashi Tongtse village, we entered Marmot Country II. This time the population density was even higher! A collection of some of the marmots we saw en route 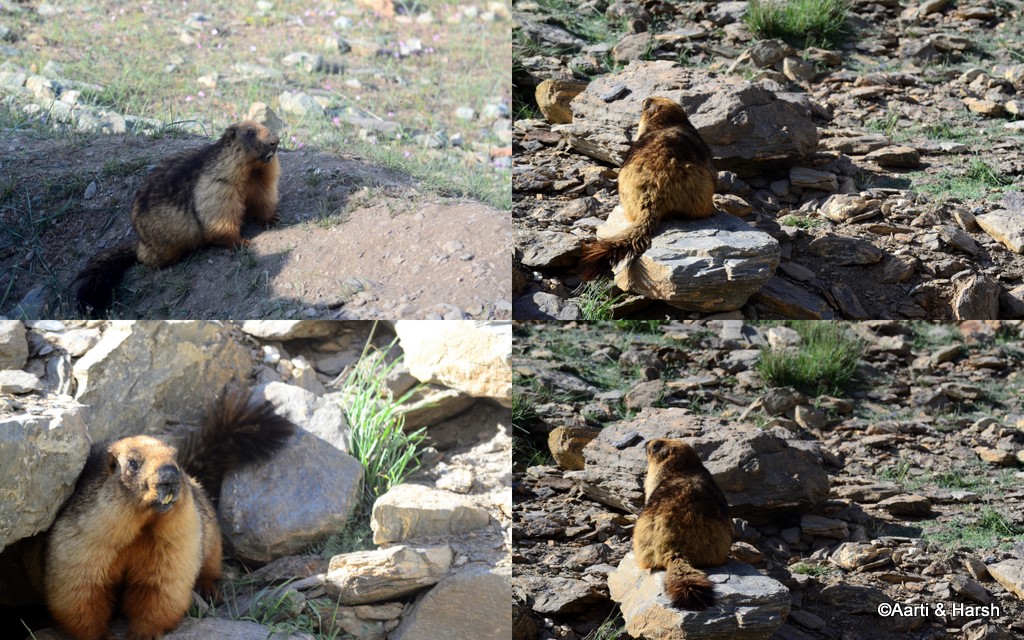 Pretty soon we began our ascent to Pensi La, which basically is a fraud! This would have to be the most gentle ascent of any high altitude pass situated close to 4000 meters in India. We were at the top at about 9:30 and it had taken us hardly about 2 hours.

In our excitement to see the views of the Drang Drung glacier, we had not taken too many pit-stops on the way. The pass itself is nothing exceptional, but the lakes around it make it quite scenic. Just before one reaches the top, one can see the source of the Suru river to the left.

The ‘climb’ to Pensi La begins; if one could call that a climb 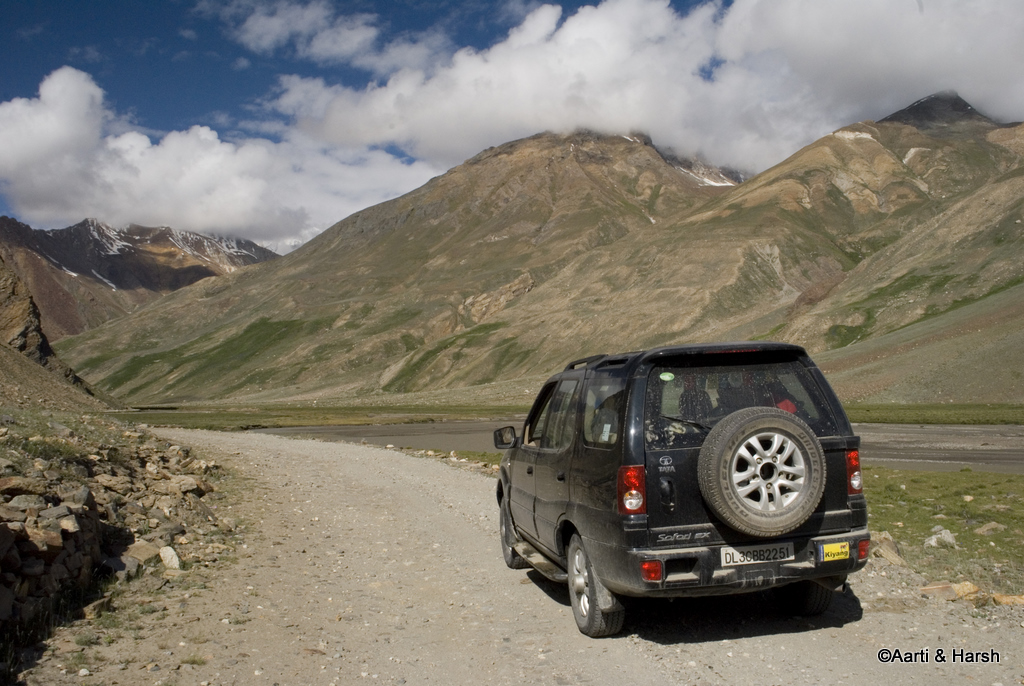 The board marking Pensi La, and the prayer flags of course 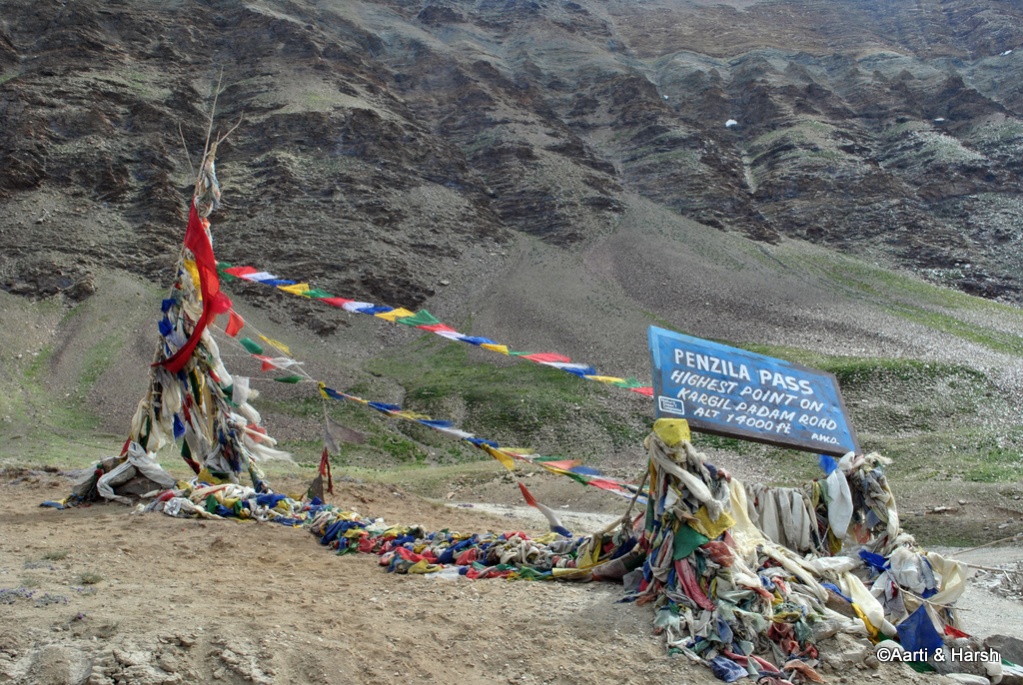 The view of the gigantic Drang Drung glacier appears just around a bend. It definitely is the greatest tourist attraction between Rangdum to Padum and if one is not mentally prepared for it, it could come as a pleasant shock. The huge glacier appears all of a sudden out of nowhere, and the best part is that it is right next to the road.

We’d been waiting with bated breath for the glacier, and now that it was in front of us, we were truly speechless. We’d known for quite a while that this glacier would be the high point of our trip, but to actually witness it right in front of us was an overwhelming feeling.

The glacier starts from the mountains on the left of the road, and as it flows down, does a classic twist, which makes it all the more lovely. We parked our car on the side and reveled in the scale of the sight before us for some time. Both of us sat on a rock next to the road, silent, admiring nature at its best.

Even the shutter remained silent. Finally, after about 20 minutes, we got up and began walking around, trying to get different views and angles to capture the massive glacier. 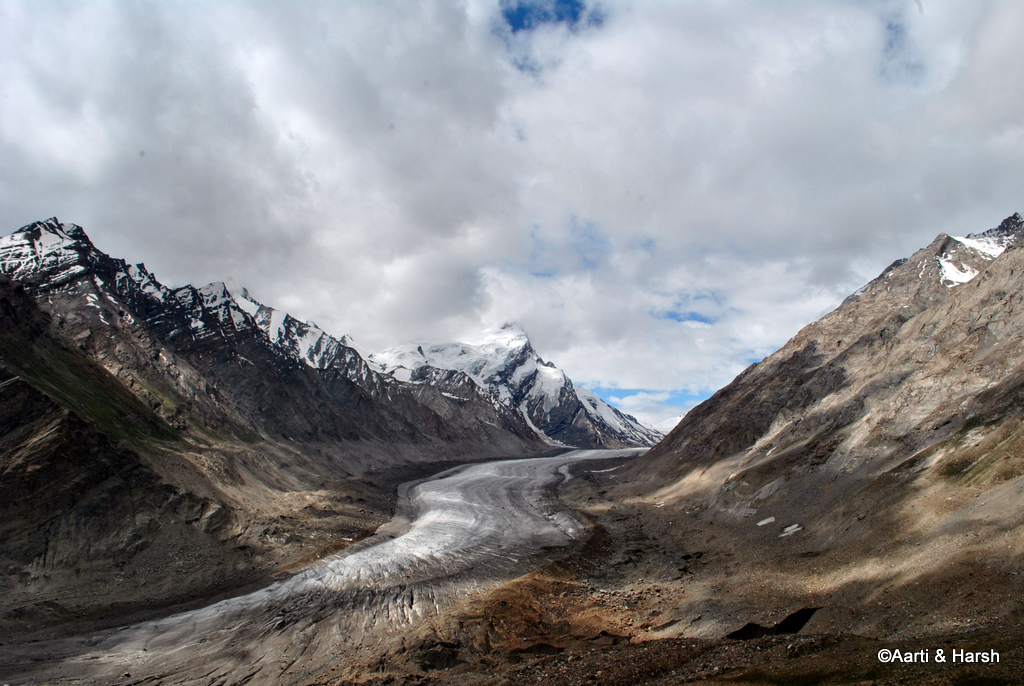 Getting Close to the Glacier

After spending about half an hour doing this, we moved on; only to realize from another bend a few km down the road that if we hiked a bit, we could we bang in front of the glacier; and would get even better shots. Our estimate said that the hike would not take more than 10 odd minutes, and so we set off.

However, as is usually the case with these hikes, it took us much more than 10 minutes, but the hike was worth the view we got at the end. We could see the glacier in all its glory, from end to end, i.e, from its source to its snout. The classic twist of the glacier looked more pronounced from this viewpoint.

Thankfully, there were some clouds which made it possible for us to just sprawl over a rock and relax! With Padum hardly a couple of hours away, we had ample time to kill. Soon, the sun came out, and we decided it would be better for us to hit the road again.

All in all, I think the glacier took a good two hours of our time. Satiated, we moved ahead, glad to know that we would see the colossal glacier again in a few days. 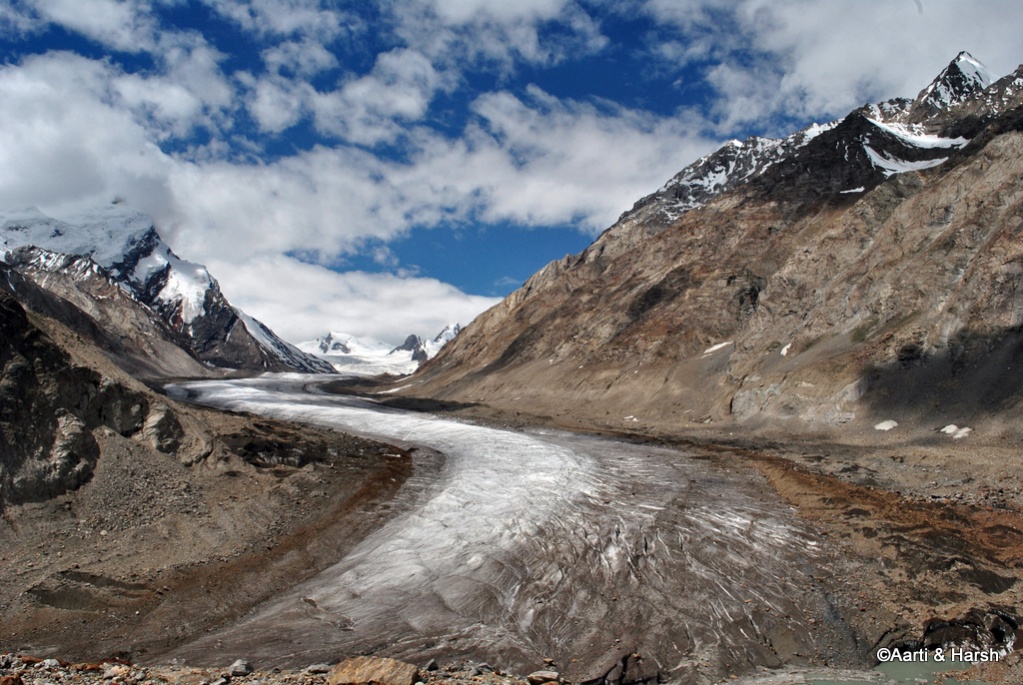 The drive from Pensi La to Padum took us about 3 hours overall, and we reached there just in time for lunch. The road is in a pretty bad condition, more so because it has never been tarred. The drive is jittery, the road being level but full of pebbles, but it does not have potholes or slush, thus 4×4 is not a necessity.

It is also devoid of settlements and it is only when one gets close to Padum that small settlements begin. For the longest time, one drives next to the Stod river, also called Doda by some.

As we crossed the bridge at Tungri, the unthinkable happened – we saw tar! Aarti was convinced that the tarred road would not continue all the way till Padum, but it fortunately did! After driving for 1.5 days on stones, the smoothness of tar was very relaxing.

The road beyond in Zanskar valley 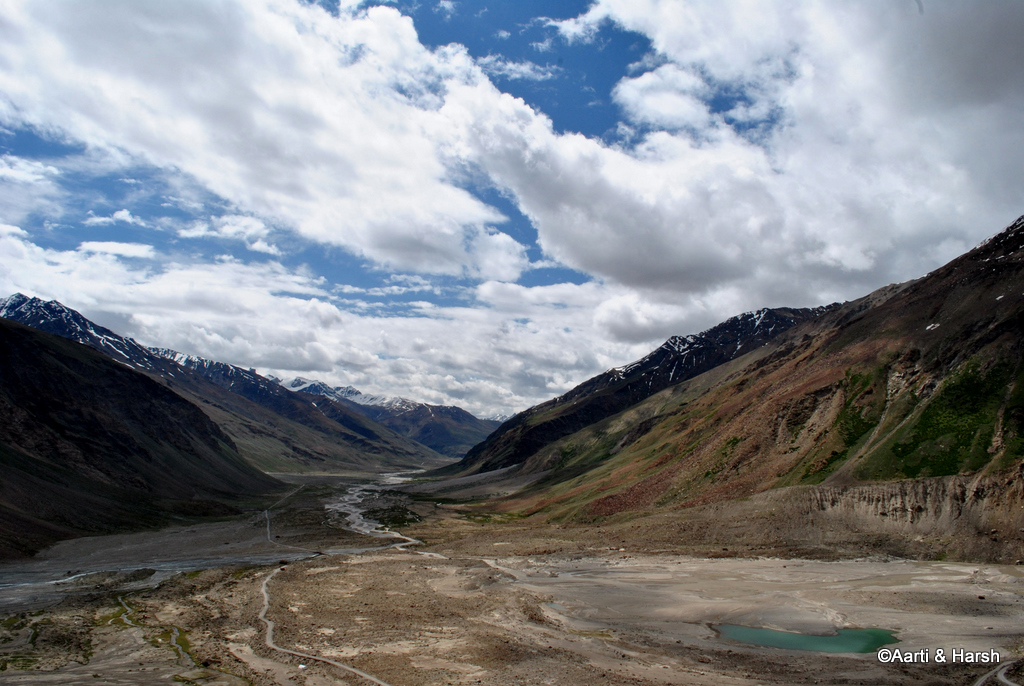 The road does not seem to have been tarred ‘ever’. PWD zindabad! 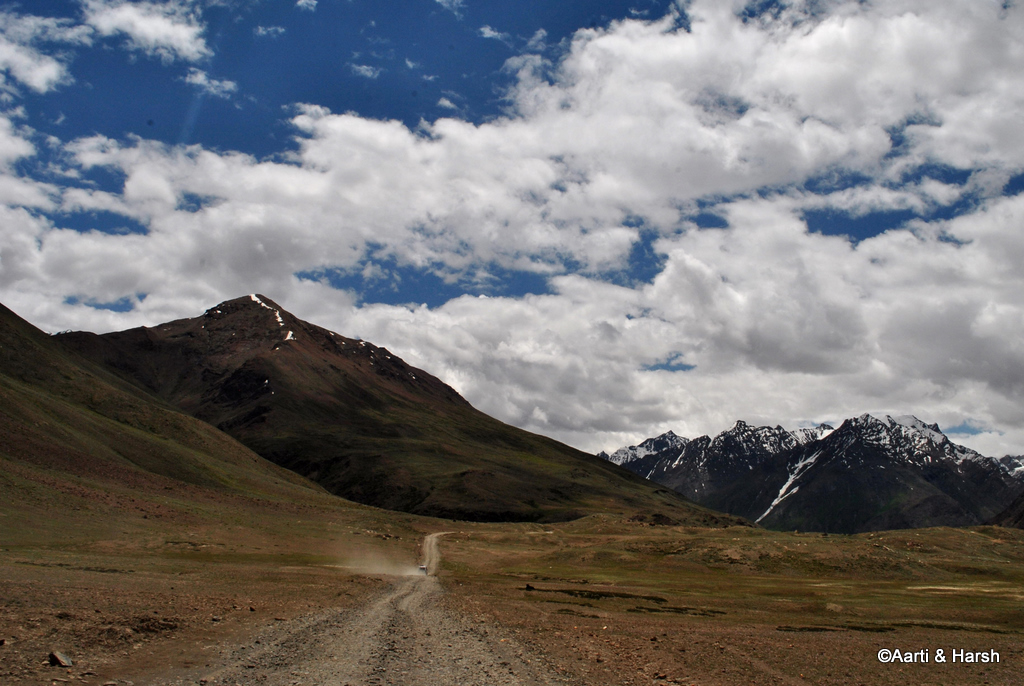 In Padum, we immediately began our search for some decent accommodation for the next 3 days that we were going to spend there. Some huge trekking groups had converged on Padum from all directions. As a result, all the decent hotels and guest houses were taken.

The JKTDC rest house was available at 200 bucks a day, although the state of affairs inside the room was quite horrible. Having no other option, we decided to stay there for a night, and then move to a better hotel by the name of Geyskit in the main market the next day. Although a tad expensive at 1200 bucks a day, it was much more comfortable.

The restaurant was great as well. Lunch happened at the New Geyskit restaurant further up on the main market road, which is a must-visit restaurant in Padum. It dishes out fantastic local cuisines, especially the Shabalay.

The distance between Rangdum and Padum is only about 103 kilometers. The reason why this journey can still take you a while to complete is because of the bad road conditions. If you drove straight between both places, you can do it in about 4 hours. With plenty of sightseeing breaks in between, it can easily be done in about 6 hours. If you started from Rangdum early in the morning, you will arrive in Padum with plenty of time to go sightseeing in the evening.

With a bit of sunlight still left, we decided to head to Karsha Monastery. It offers some outstanding views of the Padum and Pishu villages. The road goes all the way up till the monastery now and from there one climbs a flight of steps to reach the top.

I would highly recommend making the monastery an evening trip as it offers a commanding view of the valley, which looks all the more divine in the dying light of the sun. We spent a lot of time there, just sitting in their central courtyard, relaxing. It was one of those rare peaceful evenings of our trip.

The road to Karsha, which juts out of the mountain ahead. 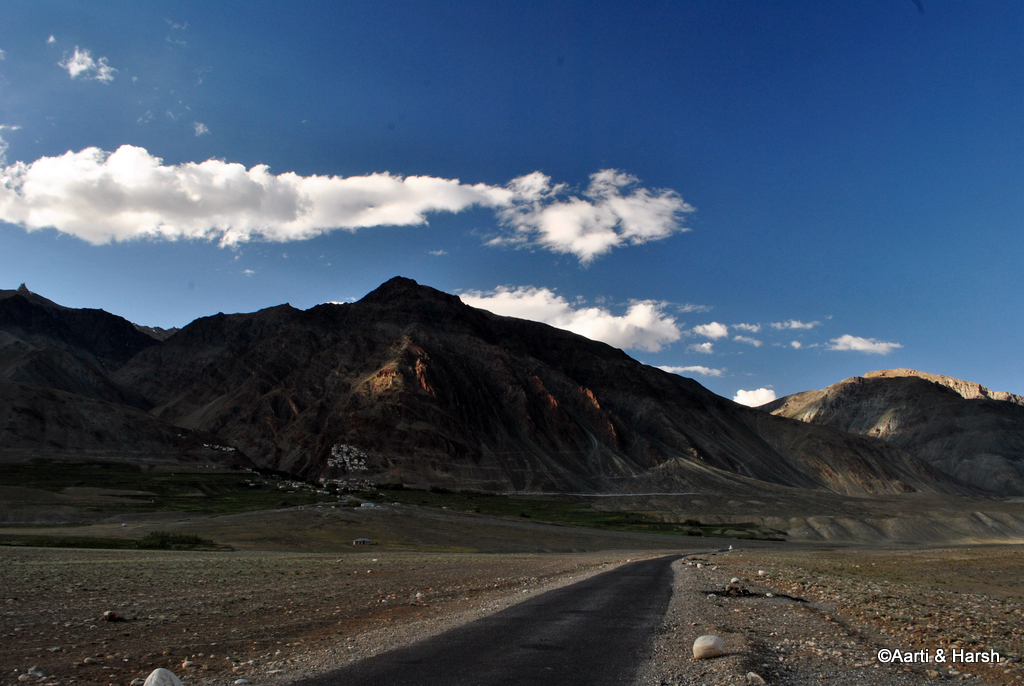 The monastery complex at Karsha 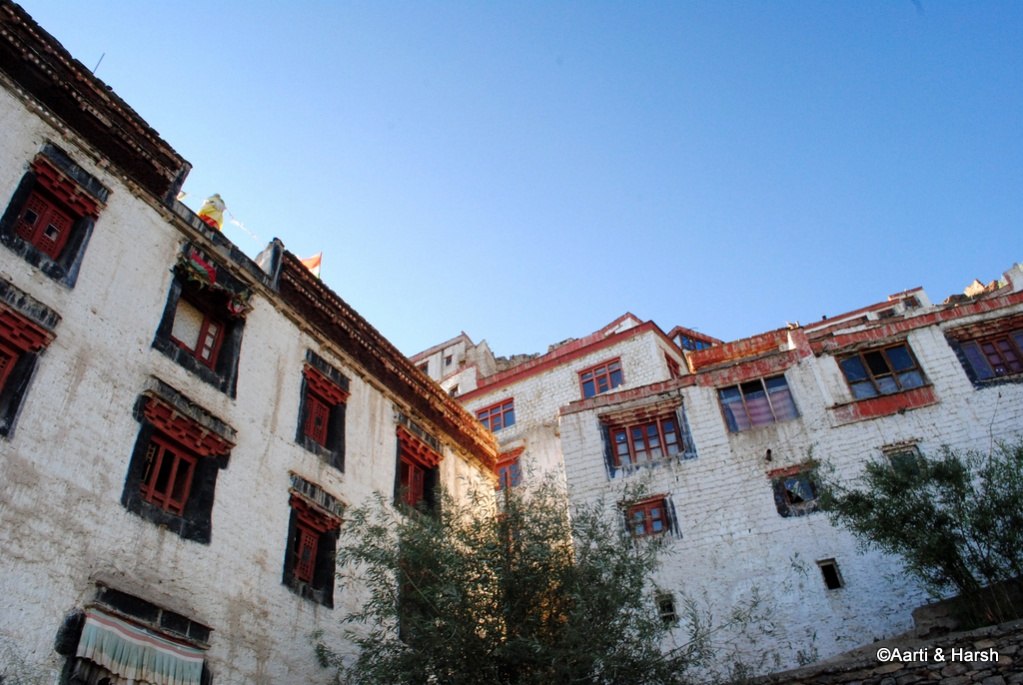 A lama looks over his land from atop the Karsha Monastery 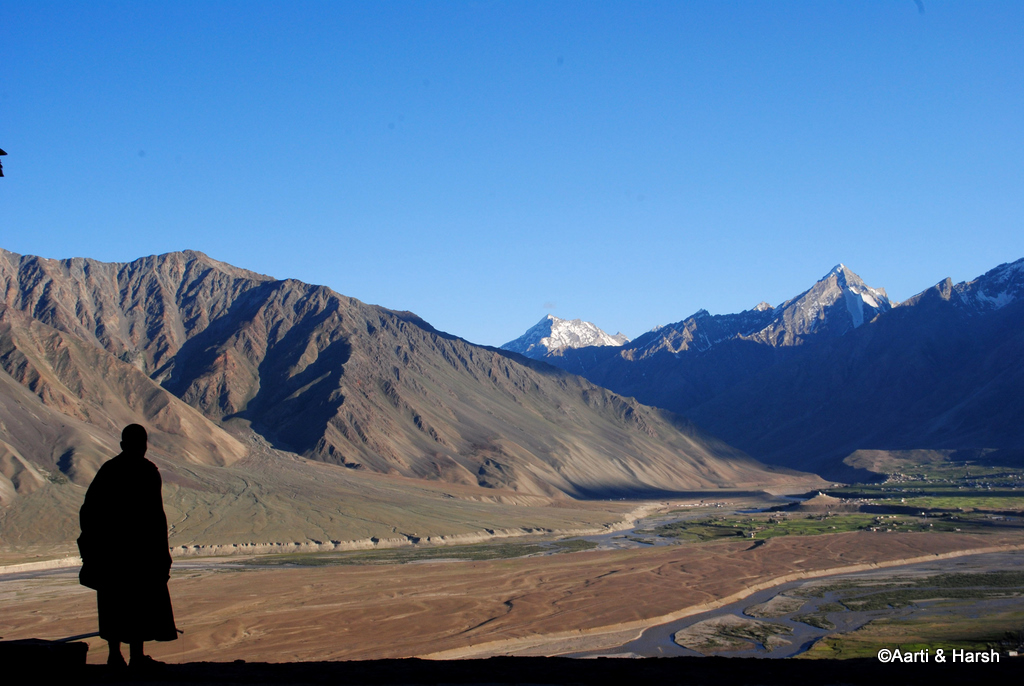 Haftal peak stands above Padum is the source of Haftal stream as well. 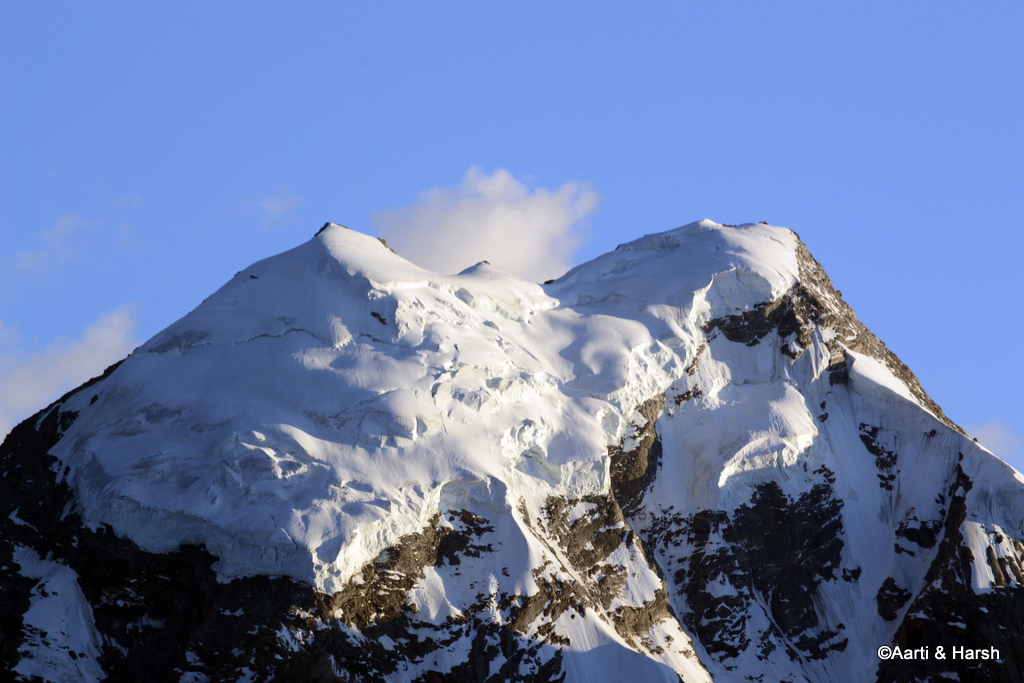 Thereafter, we returned to Padum and called it a day after having a delicious dinner at Geyskit restaurant. Tomorrow, we will be exploring other remote areas of the valley.

I hope the travelogue and information above on traveling between Rangdum to Padum was of help. Please click on the link above to continue reading the next part of the travelogue. If you have any questions, please feel free to ask in the comments section below or at our Community Forum and I will be glad to answer.