This article is in continuation of a previous one and a part of my Ladakh and Zanskar Travelogue. After spending a couple of days in Leh, we drove through the beautiful Sham Valley and stayed at Lamayuru for the night. For our journey to Kargil, we decided to take the road through Chiktan and Batalik villages that this post will talk about. To read the previous parts of the travelogue, please click on the links below.

Our initial plan for the day included a night stay at Dha to experience the Aryan culture. However, as the trip progressed and with a day lost at Rohtang, we decided against spending the night there. Given its proximity to Leh, Dha could be done on a later trip when we could actually spend a day or two there getting to know the people.

We now had two options, either to go back towards Khaltse and then take the well-known road along the Indus towards the Aryan village or to cross over Fotu La and then take a cut to the north through a village called Chiktan.

So far, we’d only seen the Chiktan road on Google Earth. We asked a couple of guys at the hotel we were staying at in Lamayuru. They confirmed the existence of the road. So we obviously decided to take it, since that is what we usually do – explore the unknown.

We started the day on a leisurely note, and it was only by 8:30 am that we managed to get back on the road again. The climb to Fotu La was nice and easy, with excellent roads and lovely weather due to the cloud cover. The road is a pretty sight as it snakes through the stark, brown landscape.

The road on the other side of Fotu La is being widened, thus the progress after the pass was a bit slow. About 30 odd km after Fotu La, we reached the village of Khangral. From where the cut to Chiktan village is marked on the highway. One can also ask for Sanjak to identify this cut going towards Dha.

The road snaking up towards Fotu La 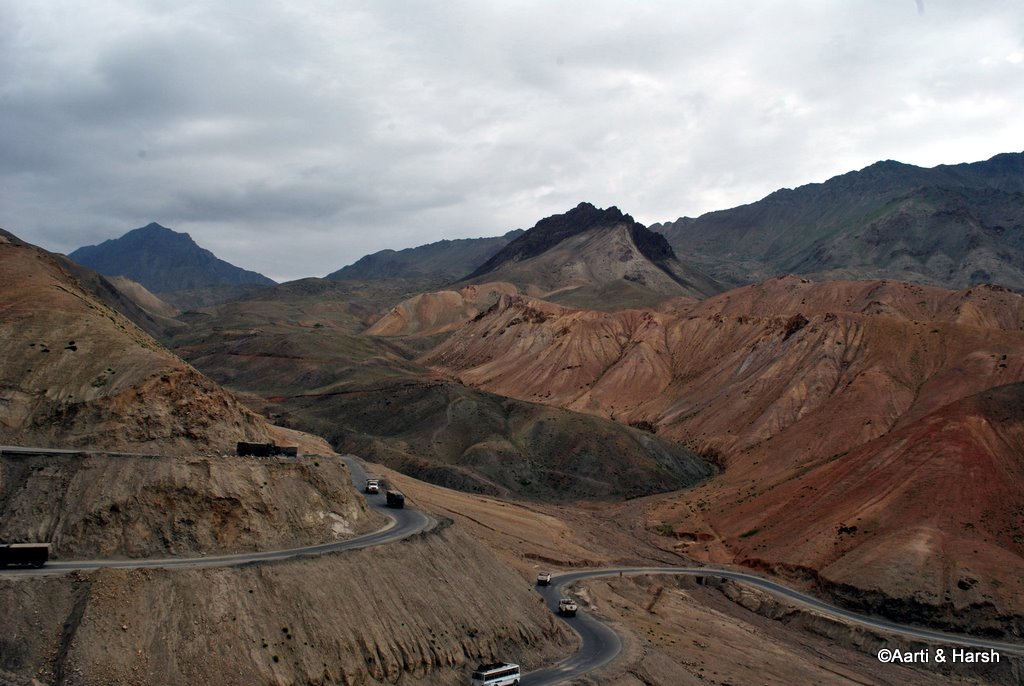 A viewpoint on our ascent to Fotu La 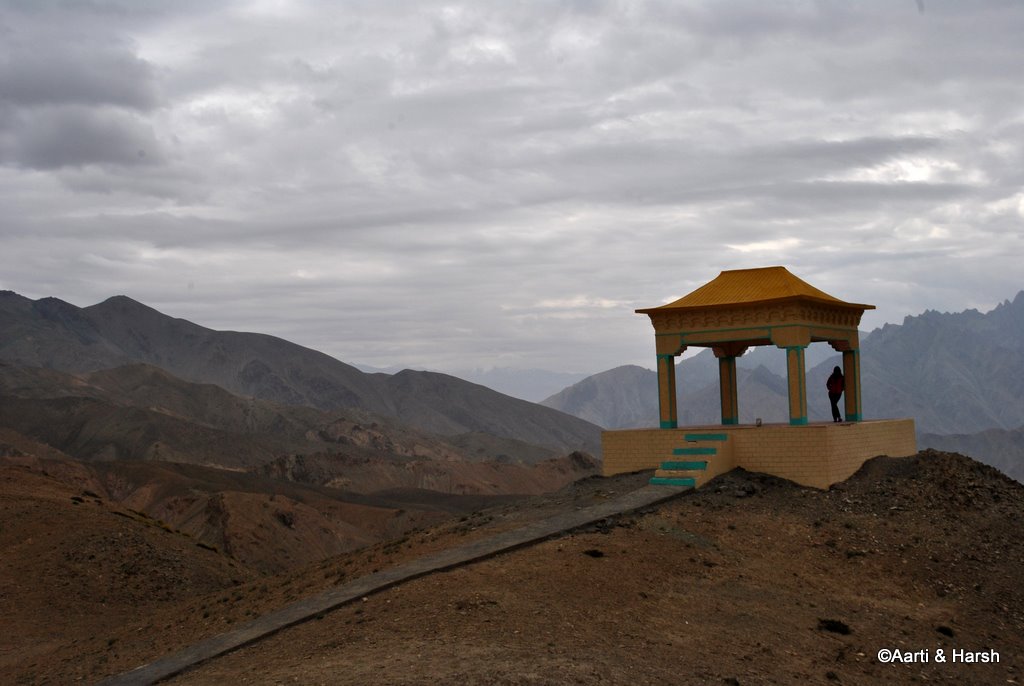 The view from the viewpoint towards Lamayuru 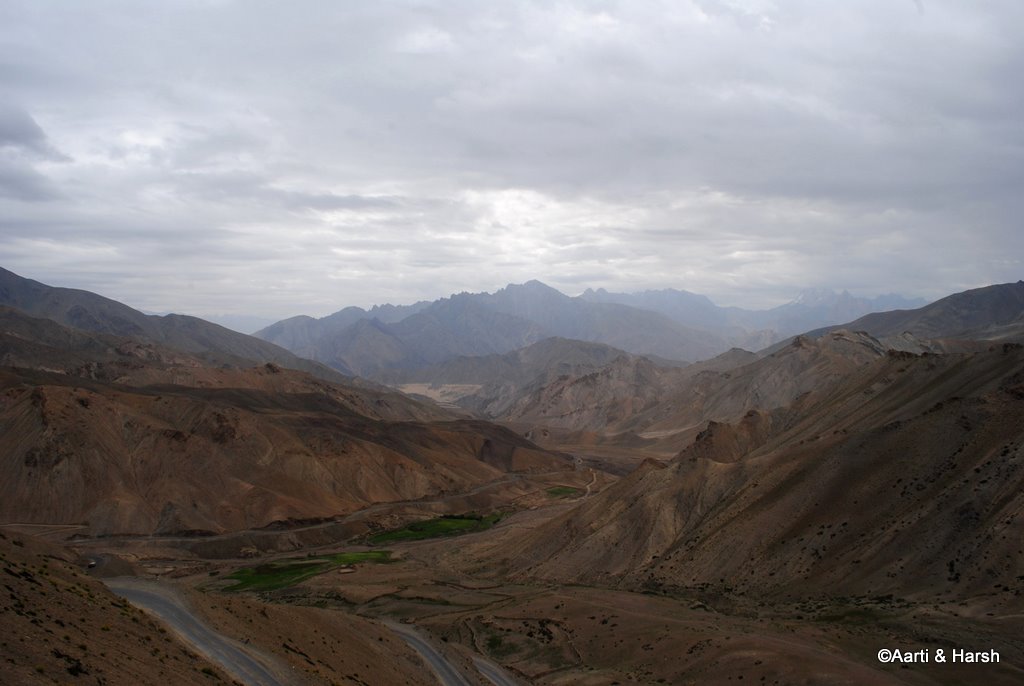 The view as one descends from Fotu La towards Kargil 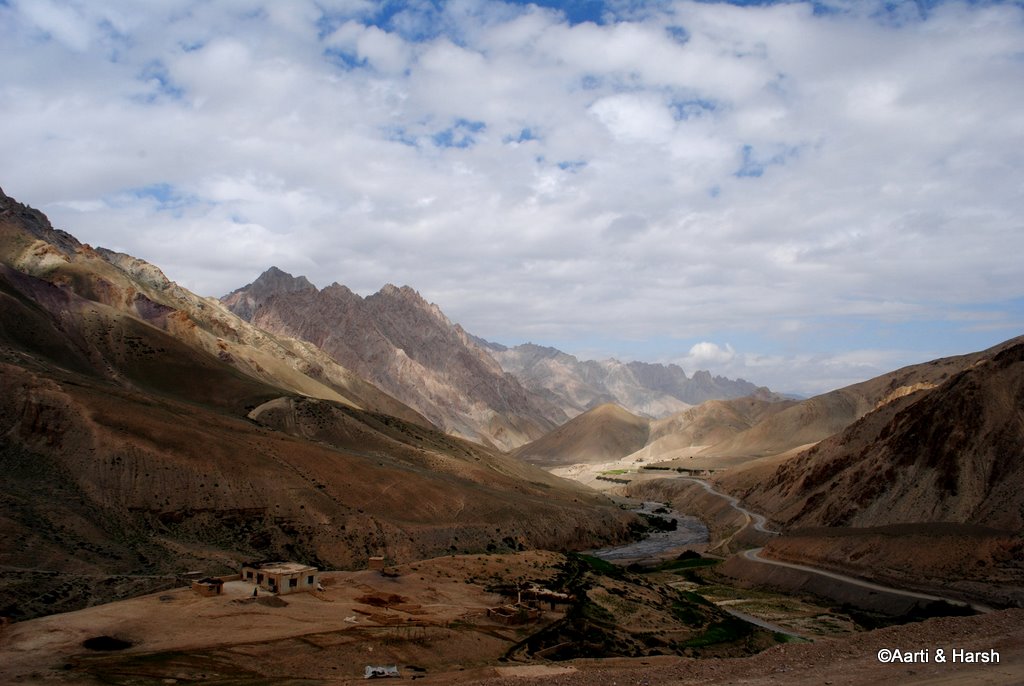 The cut for Chiktan is well marked on the highway 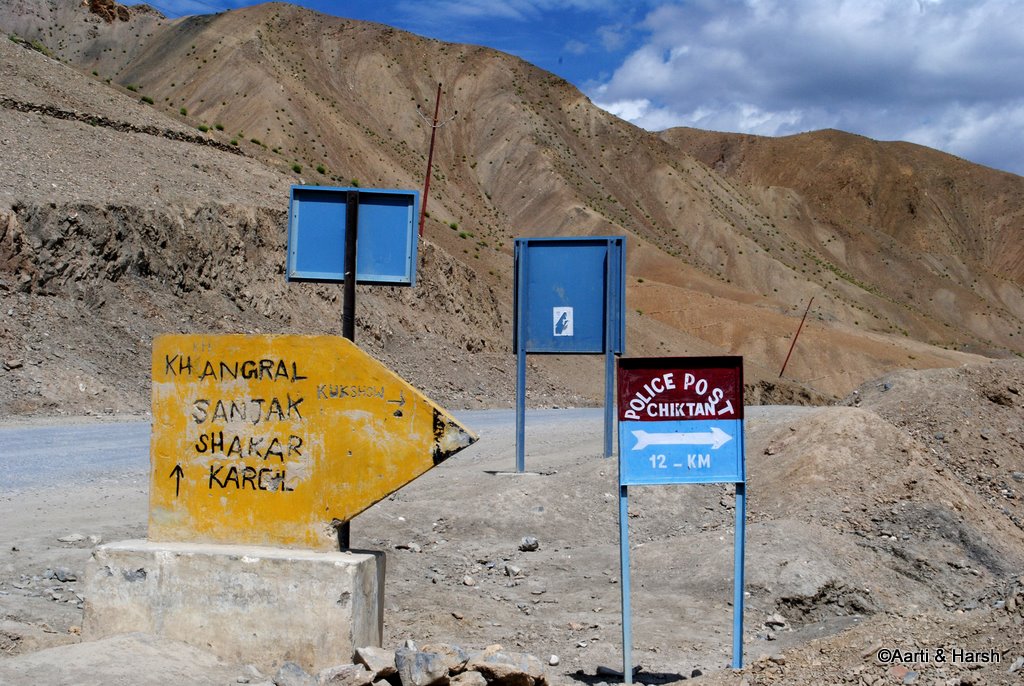 The next 35 km, till the road re-joins the Indus river, is on a flat river bed. The river flows next to the road in a lush green, densely populated valley. The population in the valley seemed to be more Muslim with plenty of Mosques en route.

Chiktan is about 12 km away from the highway. Here the route bifurcates. The straighter one sticking to the river bed, while the other climbs over a pass, and eventually descends to join the Indus. We preferred to stick on the level path, as it would be shorter and also prettier. Of course, keeping in mind Kiyang’s ill health, we were now also refraining from all avoidable climbs.

Along the way, we saw several loaded apricot trees on the other side of the river but sadly could not get a good shot of them. We’d reached the Sanjak bridge where one crosses over the Indus to join the road coming from Khaltse by 12:00 pm. We showed our permit here and rejoined the highway on the right bank of the Indus. 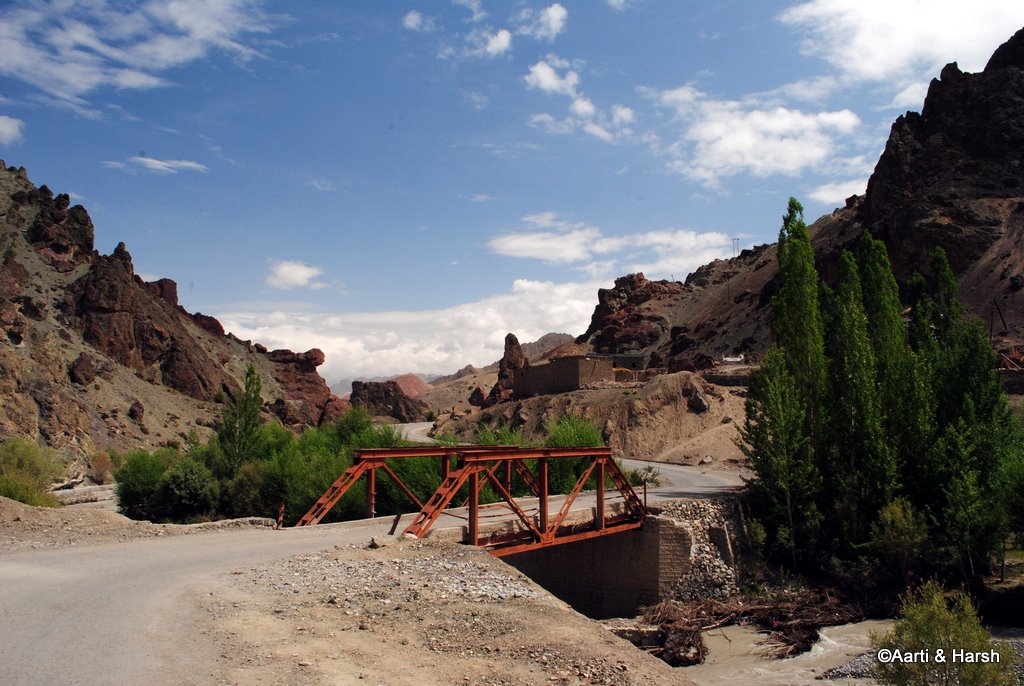 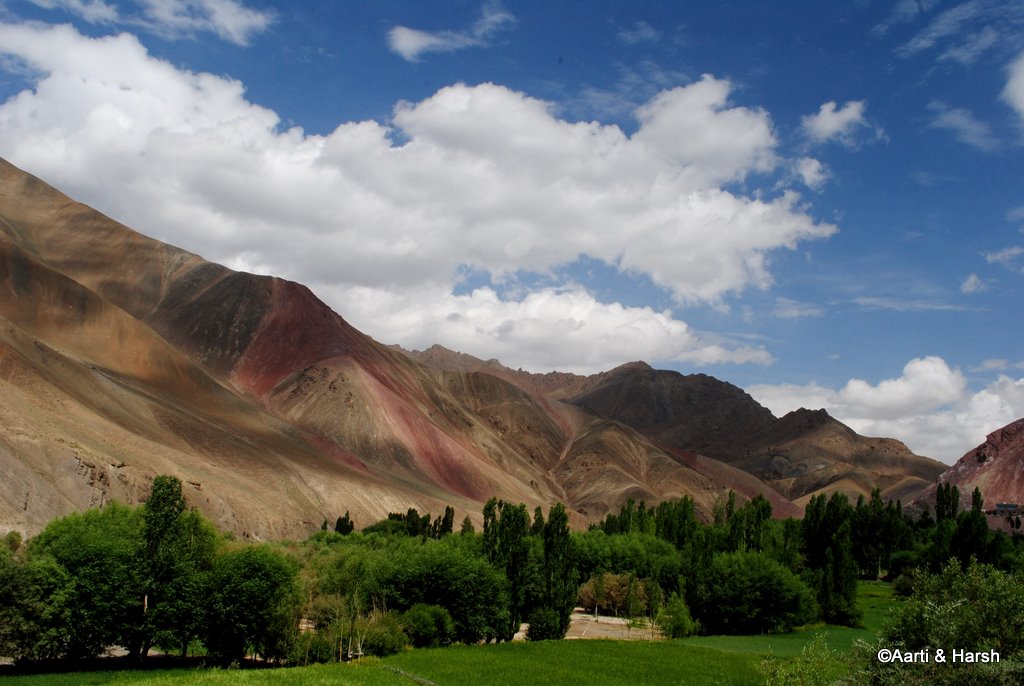 Some ruins known as Chiktan Fort. Apparently, it is a tourist attraction. We skipped it. 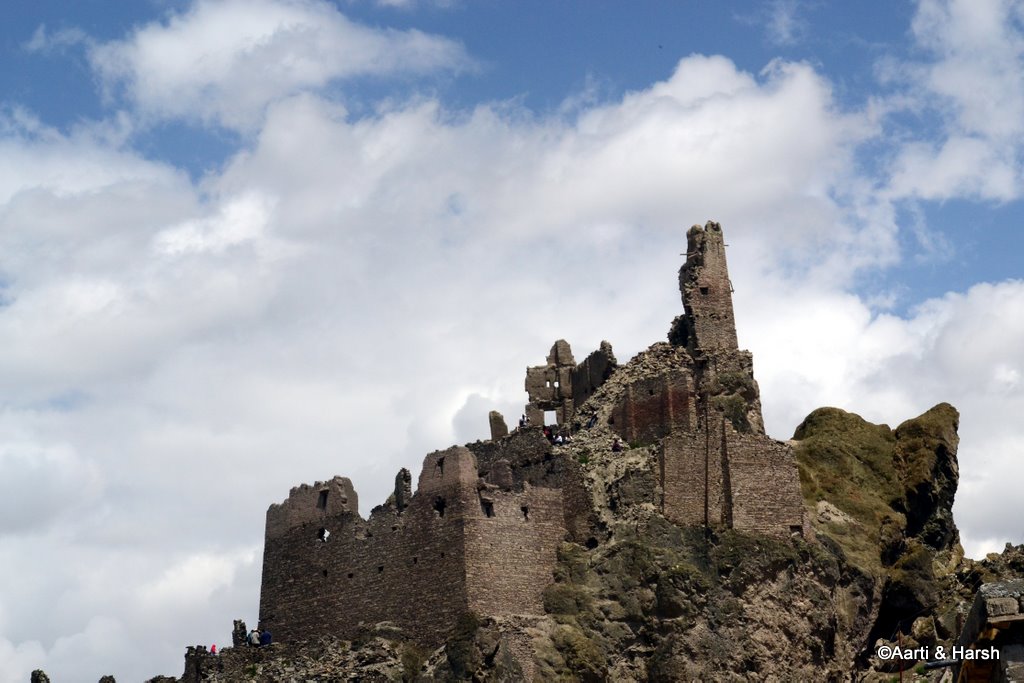 The road bifurcates again, we took the shorter one towards Dha 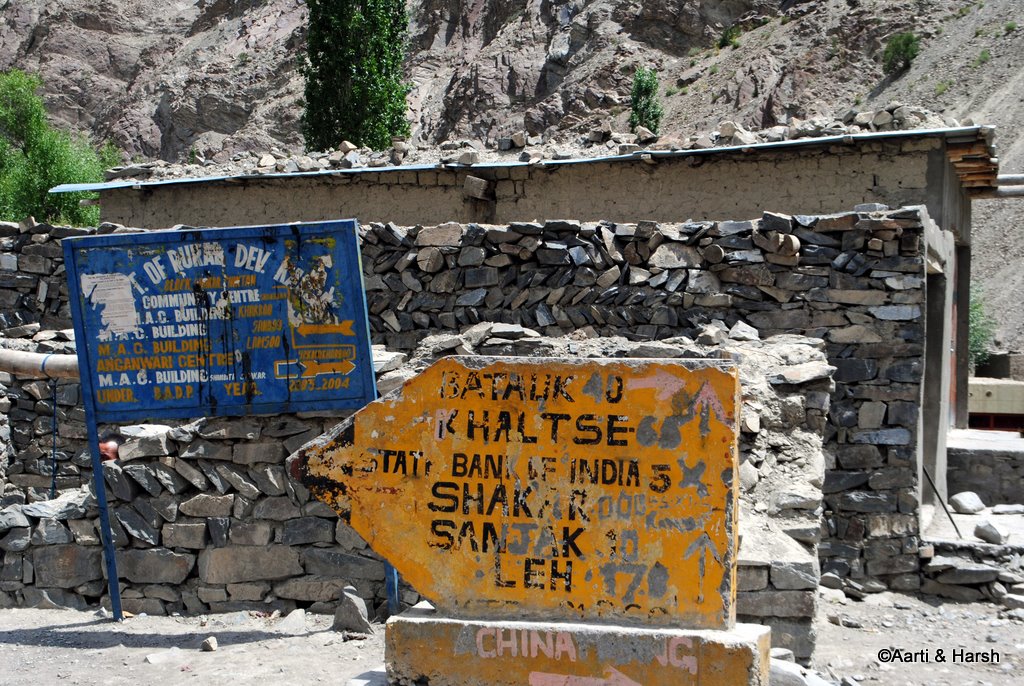 The drive by the river is splendid 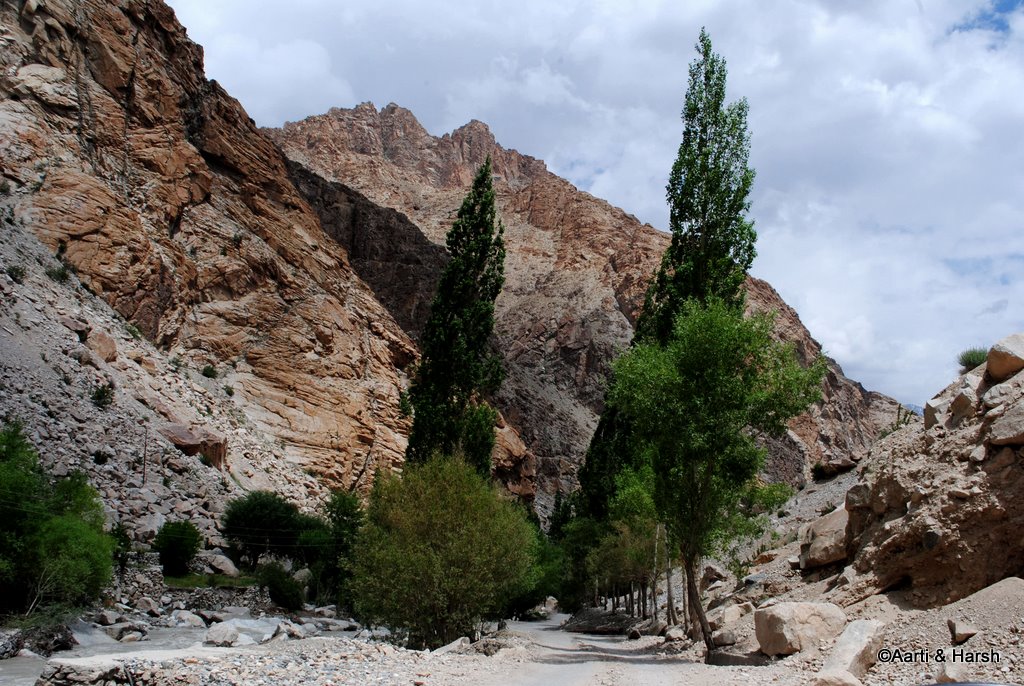 The road to Dha runs along the Indus, and the apricot trees now shifted to our side of the river. We plucked a few from a tree when no one was looking, and thoroughly enjoyed eating them!

The Indus at this point is very wide and looks quite ferocious. It is indeed sad that such a mighty river only stays in our country for a short while. The village of Dha is off the road, and as decided we did not go to explore it. We did, however, see an Aryan lady on the road, and instantly recognized her features!

The region is aptly called the apricot country. The trees are loaded with fruit and are found in large numbers in this valley. 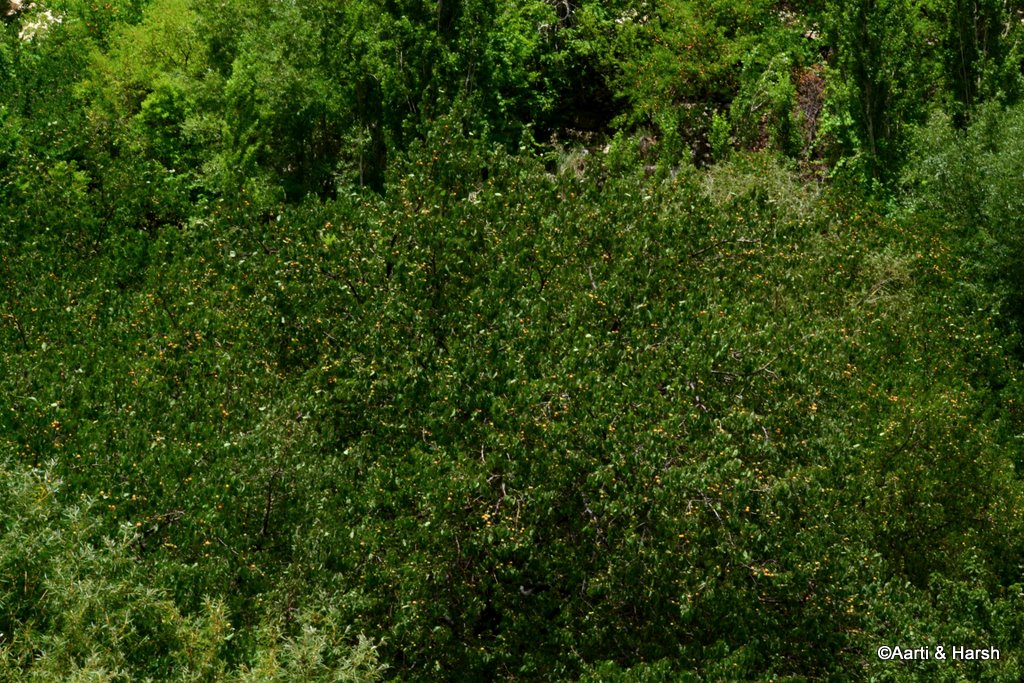 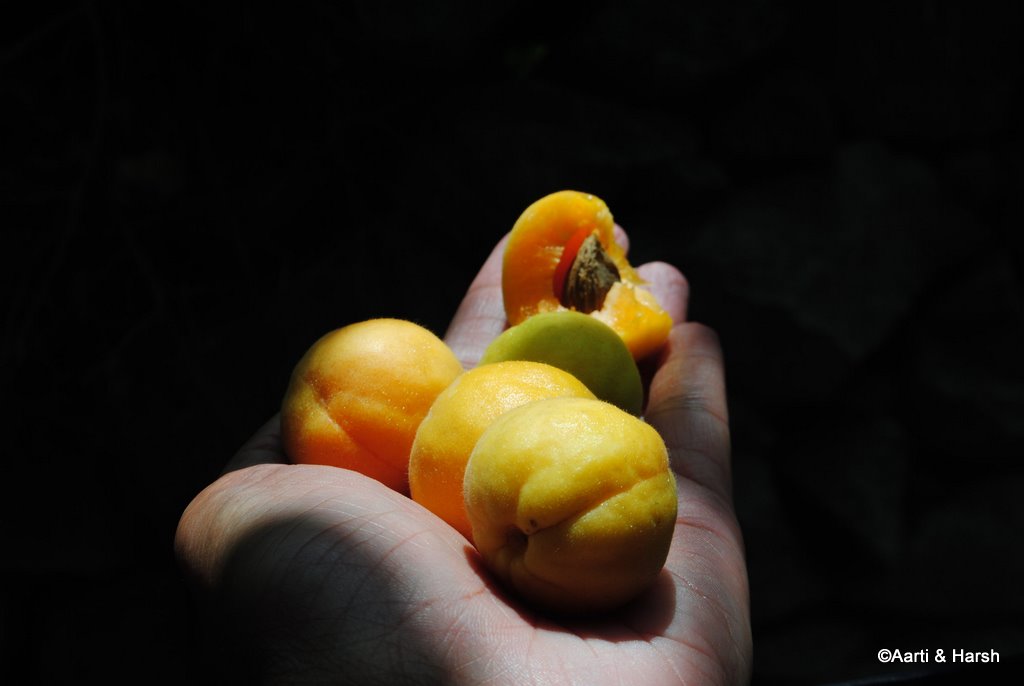 The last stretch of Indus in India

4 km before Batalik, the road crosses the Indus River; the one going straight is prohibited since it leads to the border. We said our goodbyes to the lovely Indus and began climbing. Photography is not permitted here, and even though we’d planned to take a few non-sensitive landscape shots on the sly, we couldn’t because an army officer took a lift in our car soon after the bridge.

The road now climbs continuously, which Kiyang did not like too much, and kept stalling every now and then. Anyway, we climbed an entire mountain before coming to its other side where we were greeted by a lovely village and its lush green fields.

Also Read: How to Calculate the Total Cost of Ladakh Trip

Up ahead we could see Hamboting La, which Aarti loves for its unusual name. It must snow here quite a lot since this was the only pass where a BRO signboard read: “Engage 4WD mode now”, followed by one which said, “Put on snow chains”. The pass itself is nothing spectacular, except that one can see Kargil in the distance on the other side of it. 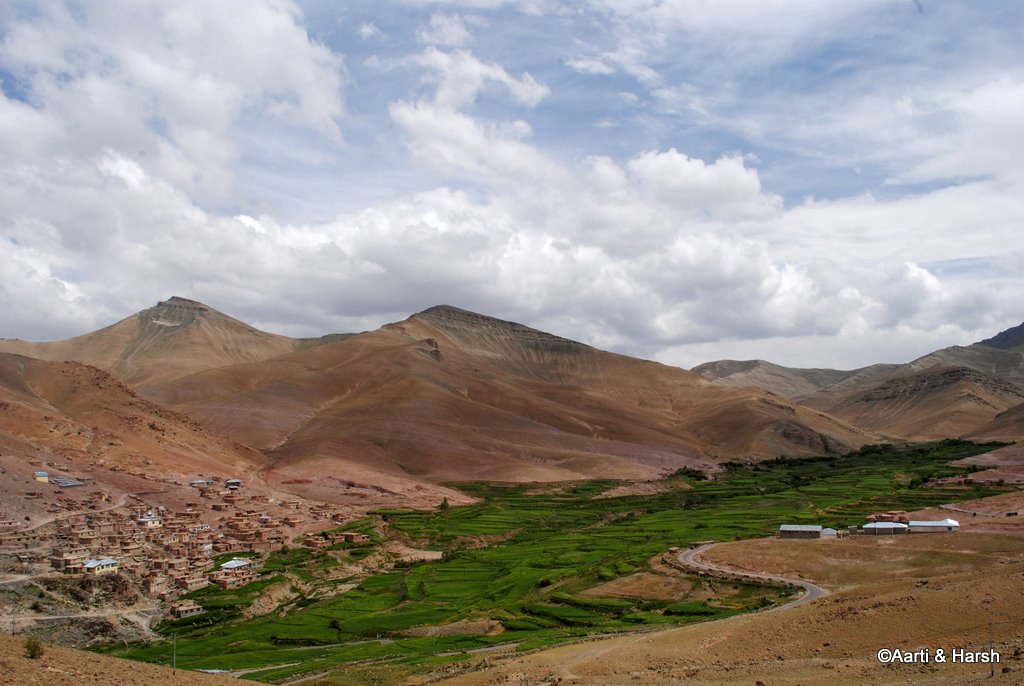 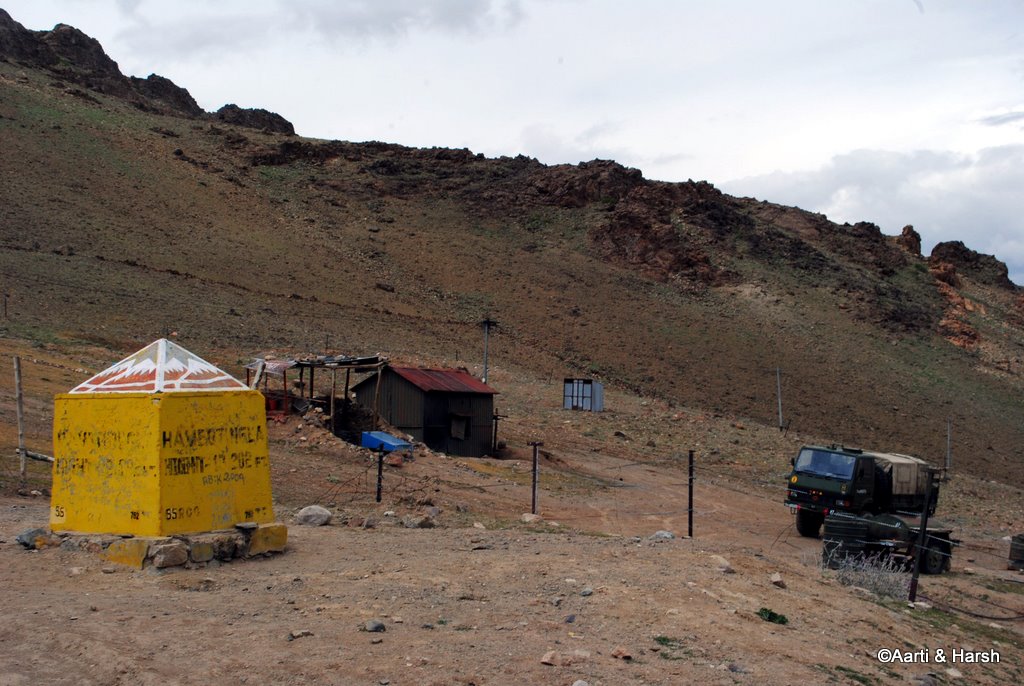 By the time we crossed the pass, it was 2:15 pm, and we were desperately hungry. We were planning to take out our stove and cook some Maggi when we spotted a dhaba. The dhaba guy had only eggs, so we gave him two packets of the Maggi we were carrying which he made with tomato puree and it tasted awesome. We also had some ready-to-eat food that he heated for us.

After lunch, we continued our descent to Kargil, taking shortcuts wherever we could. The high point of the descent was the sighting of the Nun Kun peaks. We reached Kargil by 4:15 or so and checked into the D’Zozila hotel. The next task now was to get Kiyang checked. We could not find a workshop or a mechanic who knew how to repair a Dicor, so I simply took Kiyang to the workshop opposite our hotel which could service diesel vehicles.

The green patch in the distance is Kargil, taken from Hamboting La 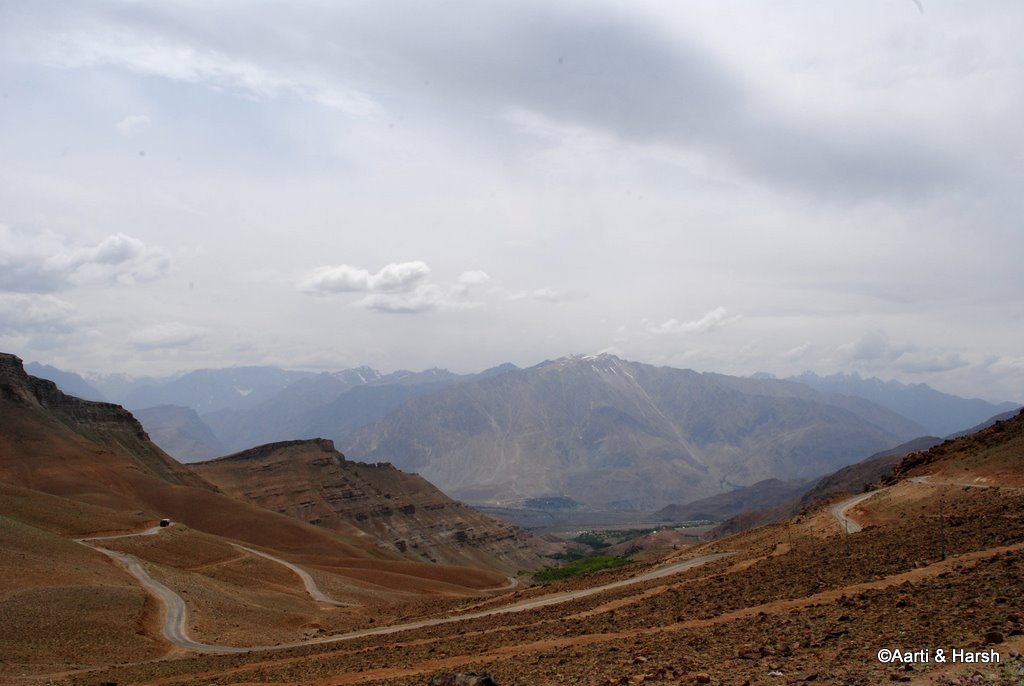 The first view of Nun and Kun

A zoomed-out view of the peaks 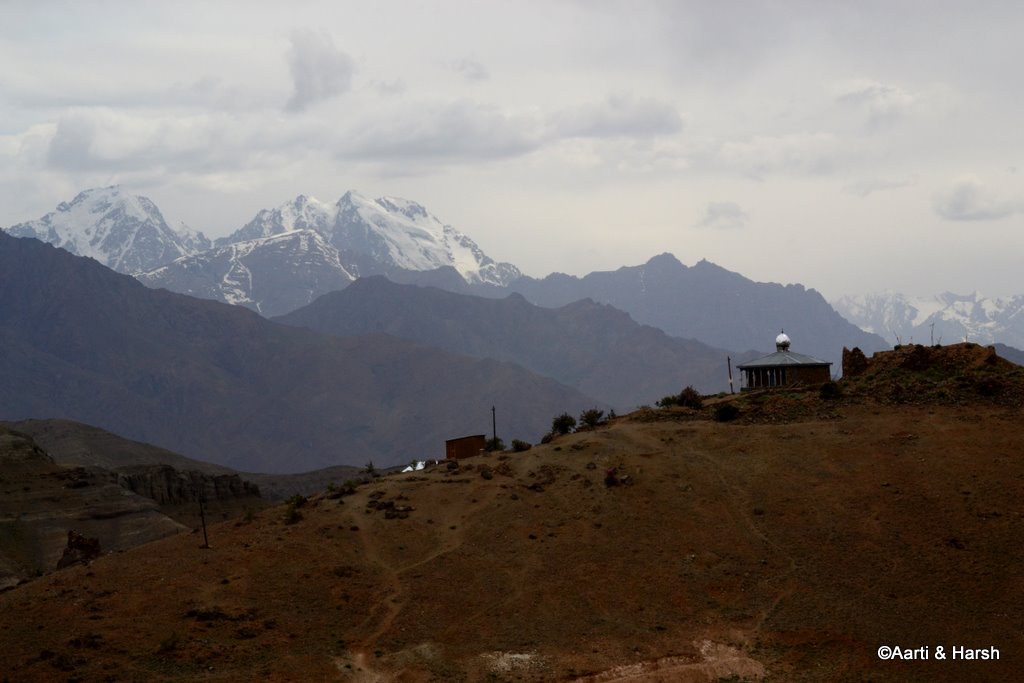 The only possible solution that the mechanics there could jointly offer was to clean the filters again. Since the oil filter could not be cleaned, the only other option was to replace it. Thankfully, I was carrying a spare filter with me, and the deed was done quickly.

I took Kiyang for a spin towards the only fuel station at Kargil and the cleaning of filters seemed to have worked like a charm. The engine seemed to be responding much better, and I was satisfied. Little did I know then that the problem was soon going to resurface and the solution provided was at best temporary.

My next stop was the gas station. With a long haul ahead of us (Kargil – Zanskar and around – Umba La – Srinagar) and the next scheduled refueling point set at Kangan (near Sonamarg), it was time to tank up to the maximum. Kiyang’s fuel tank and the two 40L jerrycans were filled up to the brim.

A local fair at Kargil. 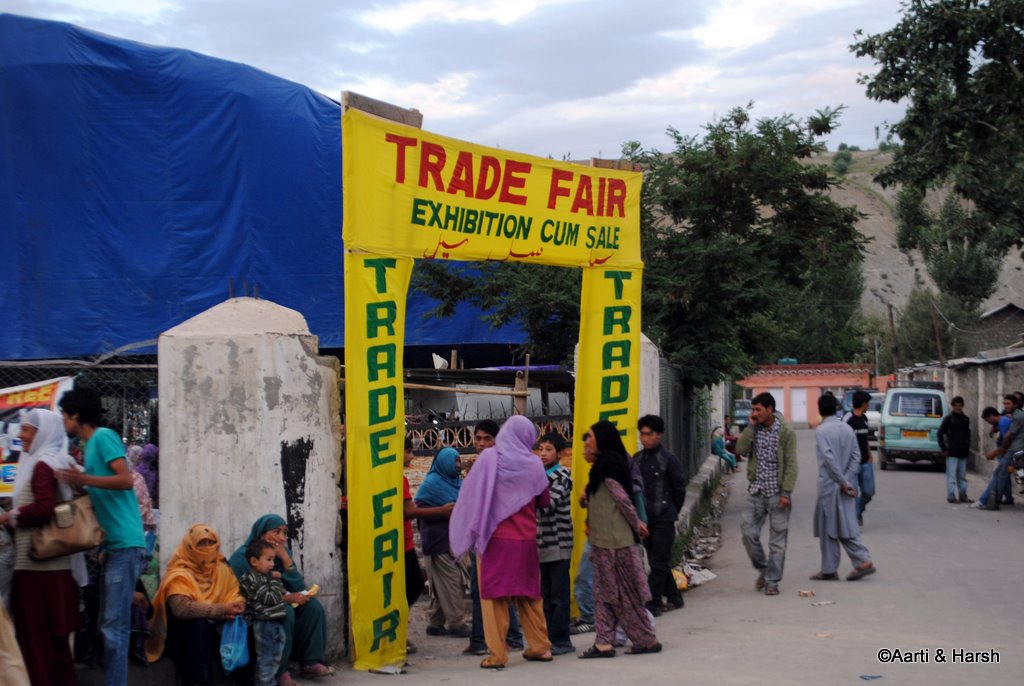 The giant wheel ride at the fair 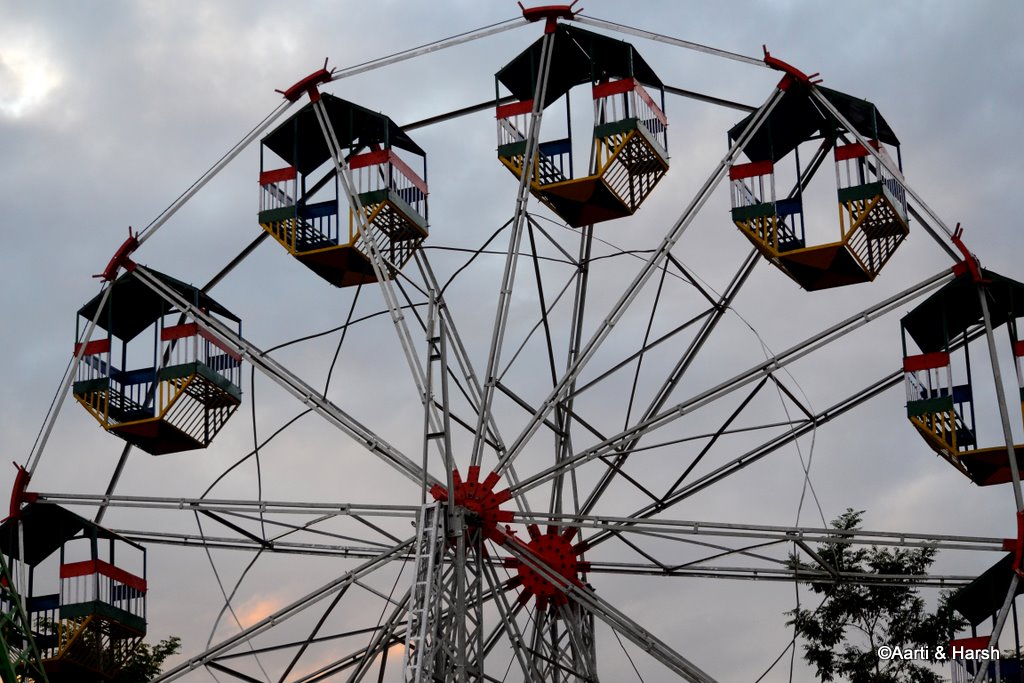 An Evening in Kargil

We went for a stroll later that evening and found the same Kababchi in the main market of whom we had taken a photo during our last visit to Kargil. We gave him the prints we had, and the guy was overjoyed. He could not stop telling people around him how rare it was for people to come back one year later and still remember him. We felt elated! He offered us some kababs which we gladly accepted, all of it being on the house.

We’d planned to have dinner in our hotel, but given the exorbitant buffet rates, we decided to visit the market again for supper. Dinner happened at the same Tibetan place we’d eaten at last year. Then it was time to call it a day, and we went to sleep with eagerness to finally begin our journey to Zanskar the next day.

I hope the travelogue and information above on Chiktan, Dha, and Batalik villages were of help. Please click on the link above to continue reading the next part of the travelogue. If you have any questions or need any other details, please feel free to ask in the comments section below or at our Community Forum, and I will be glad to answer.