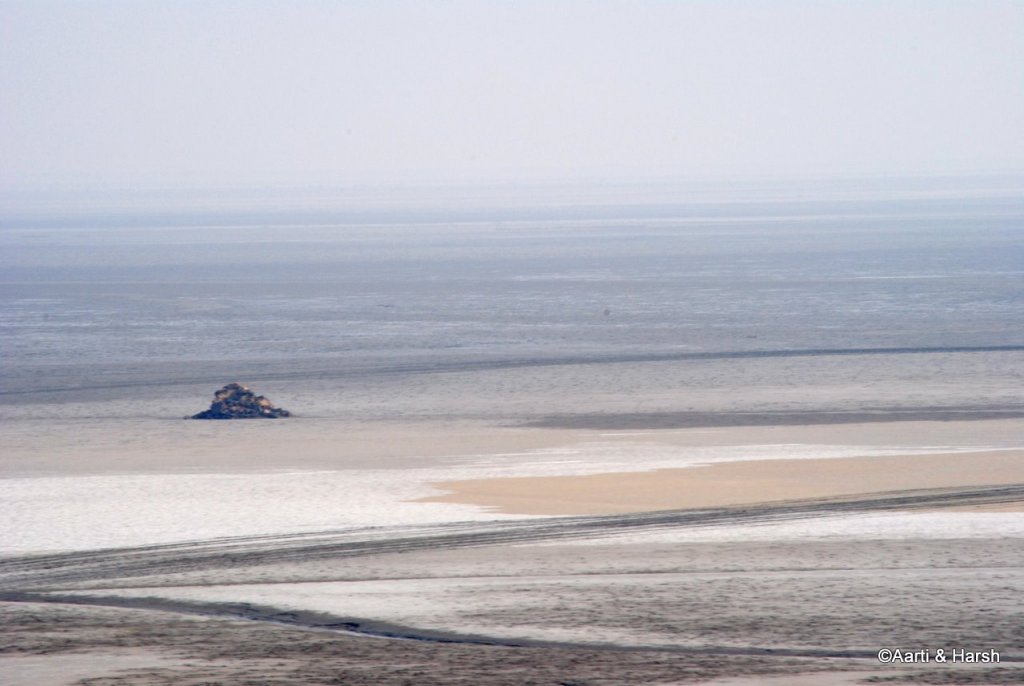 This article is in continuation to a previous one and a part of my Rann of Kutch trip log. We traveled from Delhi to Bhuj in 3 days while crossing the Little Rann of Kutch on the way. On Day 4, we made a road trip from Bhuj to Lakhpat fort and Koteshwar temple, details of which are provided in this article. To read the previous parts of the travelogue, please click on the links below.

We had to begin early again on day 4 since we planned to visit Koteshwar and Lakhpat, and also return to Bhuj before sunset to collect our permit. A tasty breakfast of packed sandwiches and juice awaited us at the reception, and we were thus able to leave for Lakhpat by 7:30 am.

The route follows the SH heading west from Bhuj towards the bustling town of Nakhtarna and into the vastness of Lakhpat. The highway till Nakhtarna is densely populated with villages on both sides, and thus the average speed is not very good.

However, once the hustle-bustle is crossed, and the zillions of speed breakers negotiated with, the countryside opens up and one can feel the proximity to the Great Rann. It took us about an hour from Bhuj to cross Nakhtarna.

A short while thereafter we were staring at a huge board informing us that we were crossing the Tropic of Cancer. I am not a fan of such milestones myself, but it was fascinating to watch Aarti getting all excited. From here on, the road is quite straight, devoid of population, and marred with shrubs on both sides. 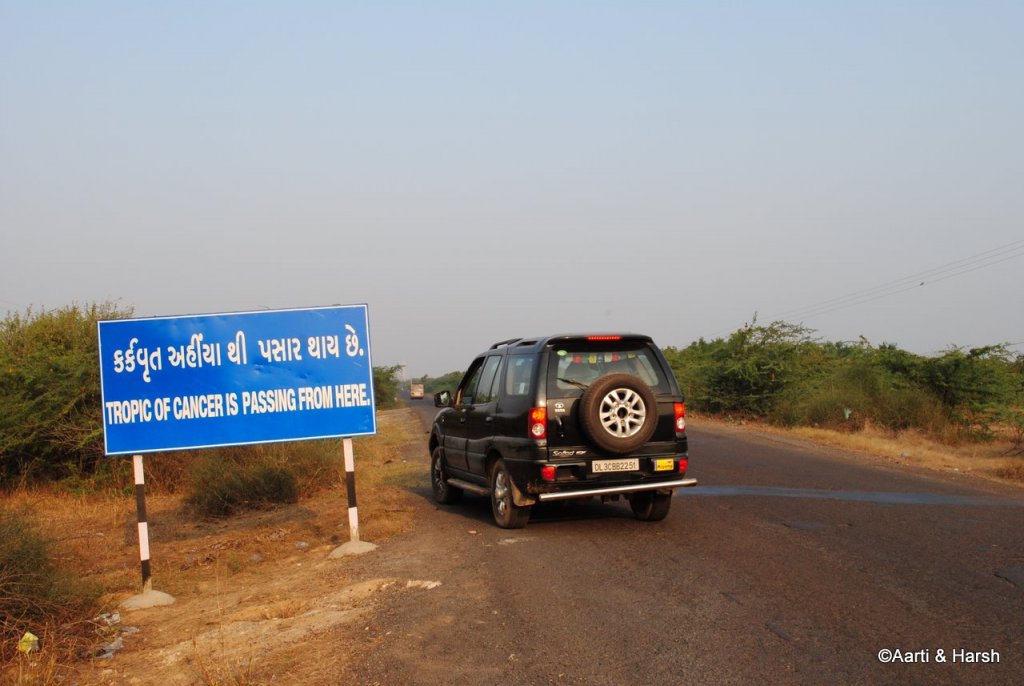 About 45 km or so before Lakhpat, we crossed a small village called Gaduli where the road from Koteshwar joins the SH. Past Gaduli, one rides next to the Chinkara Narayan Sarovar wildlife sanctuary all the way to Lakhpat.

The board at Lakhpat Fort said:

Lakhpat perhaps derives its name from the prosperous maritime trade in the past that generated a daily income of one lakh kori, the then currency of Kutch.

Situated at the western tip of the Indian subcontinent at the junction of the Kori creek and the Rann of Kachchh, Lakhpat lost its maritime significance in 1851 AD after the displacement of the Indus river in 1819. Another legend says that since Rao Lakhha founded it, it is named Lakhpat.

Guru Nanak is believed to have camped in Lakhpat on his way to and from Mecca. The house where he stayed was later sanctified as a Gurudwara. The other places of tourist’s interest include the tomb of Gosh Mohammad and a number of old Hindu temples.

Now Lakhpat is a fortified town with high walls, several gates, and a bastion made out of hard stone. It wears a deserted look and is scarcely inhabited.

A panorama of the Lakhpat Fort

A board describes the story of the fort. 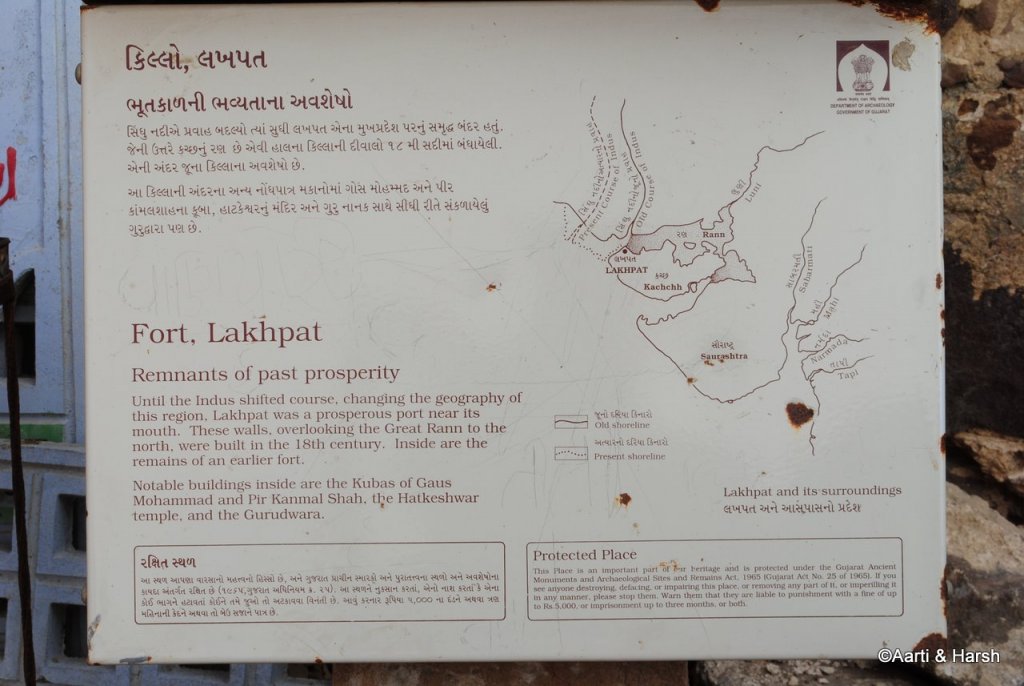 ​We reached our first destination by 10:00 am. The striking fort of Lakhpat is visible from quite a distance, and it is only from this distance that it can be captured in its entirety.

Two signboards at the entrance describe the Lakhpat fort. But the chai-wala at the entrance spiced it up for us with his ramblings about the shooting of two movies here, Refugee and Lagaan. After a cup of hot masala chai, we headed towards the Northern wall of the fort, completely unaware of the vistas beyond it.

It was VERY windy up there, and the views were to die for. A panorama of the Great Rann from the ramparts of the fort. The vista unfolded all of sudden when it was least expected.

The experience of sitting there silently, while both us took in the views was fantastic and difficult to describe. The views themselves are difficult to capture. The magnitude of the landscape is very overwhelming.

It was time to pose, with the tummy tucked in securely. 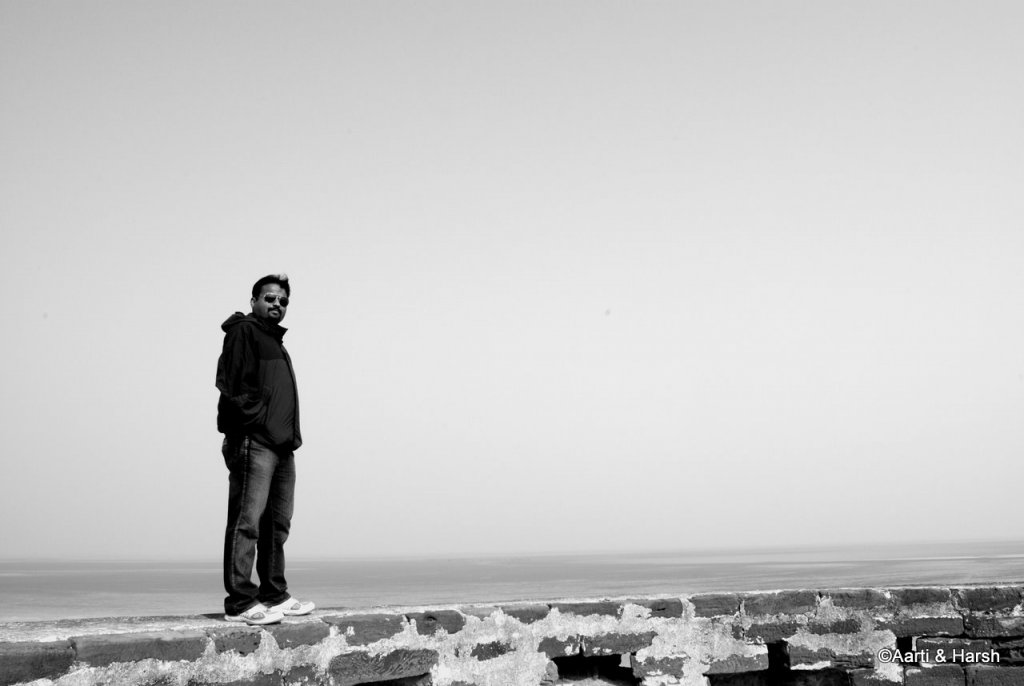 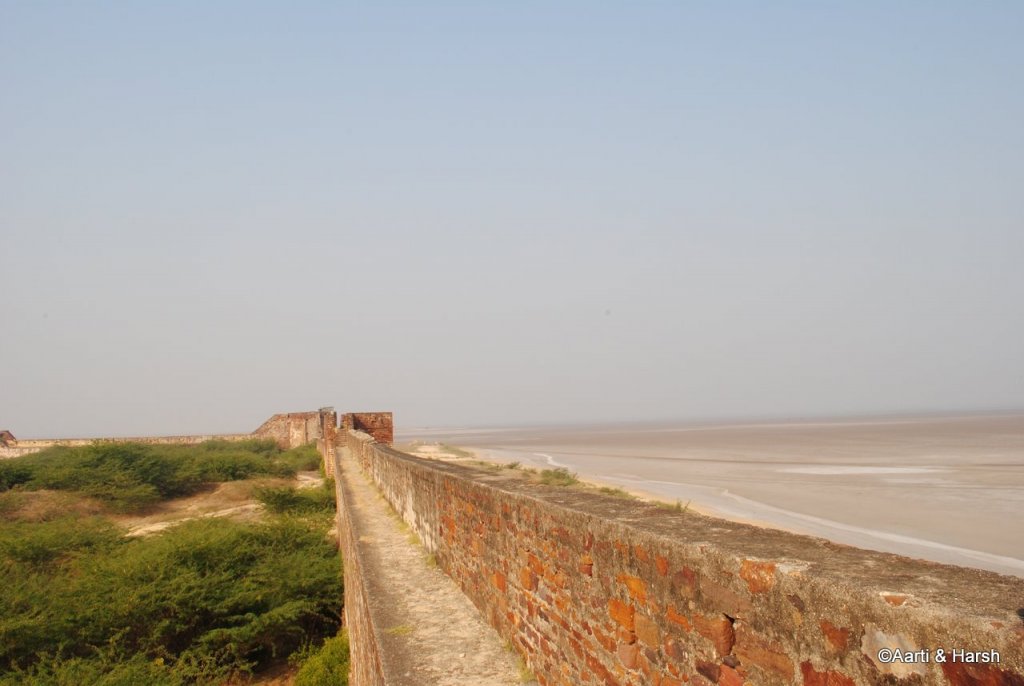 We spent a lot of time at the Northern wall of the fort, admiring the vastness of the Rann, and also trying to capture it on camera. To the west of the fort lies the Kori creek and to its North is the marshy Rann.

We drove around the village inside the fort for some time. It is not all that deserted, despite the saying on the board. We also tried to venture into the Rann but failed as the exit was guarded by BSF jawans who refused to let us through.

Finally, after a bit of roaming around, We decided to proceed towards Koteshwar, our second destination for the day.

The tomb of Gosh Mohammad 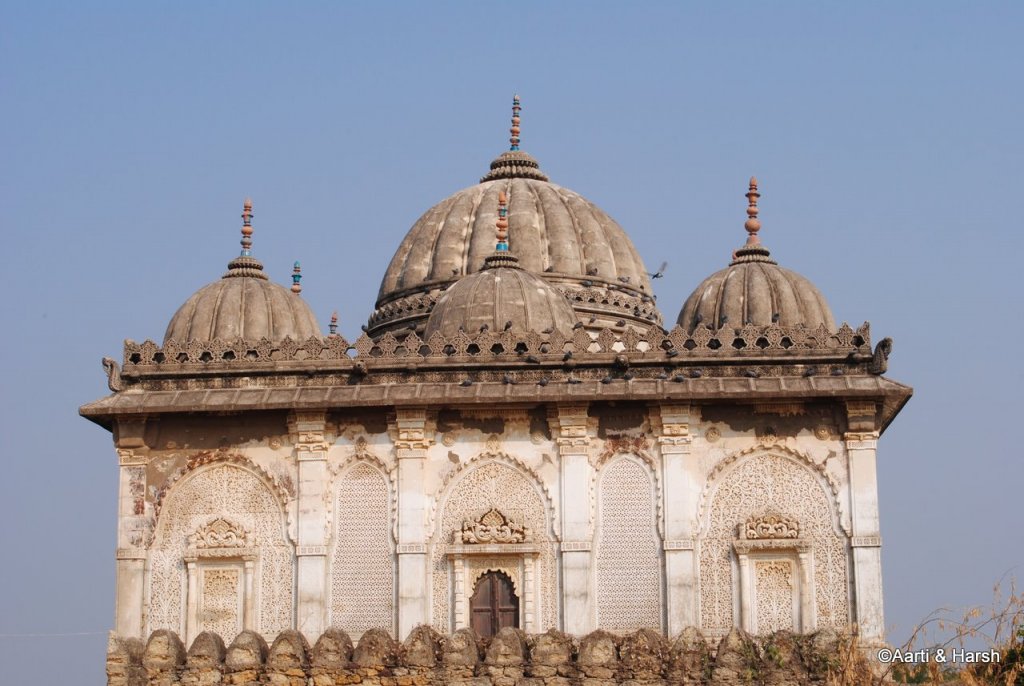 ​The road to Koteshwar from Lakhpat moves south, crosses the BSF post there, and is largely devoid of any human population. The road runs parallel to Kori creek.

We took a small detour towards another BSF post right next to the creek which, I think, was called Biwi ka Kua (wife’s well), only to be scolded and sent back by a Jawan. The road here too is largely straight and marred by shrubs on either side.

A bit of advice – when driving on this road, be careful when you see a vehicle approaching from the opposite side; lest you want to get a paint job done on your vehicle.

The straight road towards Koteshwar 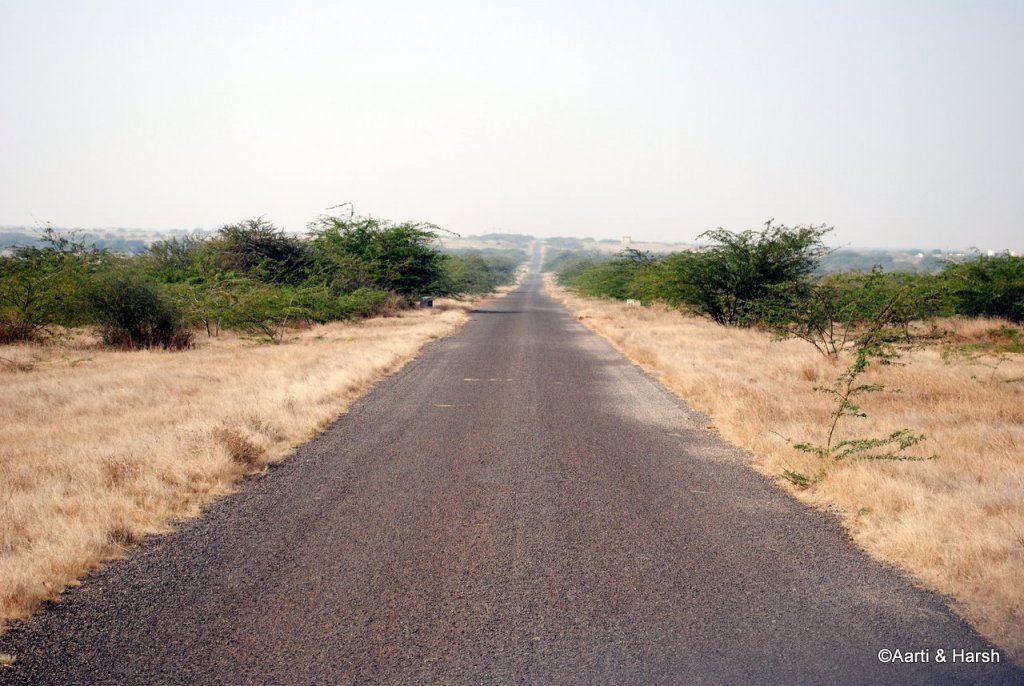 Soon we reached Narayan Sarovar. Mythologically, it is one of the five holiest lakes of the Hindus; one of the remaining four being Mansarovar. However, since the lake is easily accessible, and also possibly because Gujarat overall is a non-glamorous state when it comes to tourism, it does not get the required publicity.

The temple crowd there was a major put-off for us, and we headed straight towards Koteshwar. The final approach road to Koteshwar has the Arabian Sea on both sides and is fun to drive on.

The pier at Koteshwar itself is nothing to boast of, apart from being the westernmost point of land in India. We saw some fishermen’s boats. A BSF Jawan posted there told us that all fishermen are supposed to sport the Indian flag on their boats. This is for identification purposes by the BSF patrol boats. The Pakistani fishermen do the same, Karachi after all being quite close.

The temple at Koteshwar also did not seem much to write home about, so we decided to give it a miss. Yes, we are horribly non-religious.

It is not allowed to venture past this board. But since all signboards in Gujarat are in Gujarati (a sign of the state not being too tourism-friendly), we did not understand what was written on them. We went ahead, only to be immediately sent back by a Jawan.

We did so reluctantly, wondering what possible harm it could cause if tourists did in fact go up to the pier. The only possible conclusion we could arrive at was that the Army must fear that someone might decide to jump from the pier and swim to Pakistan!

The western-most temple in India 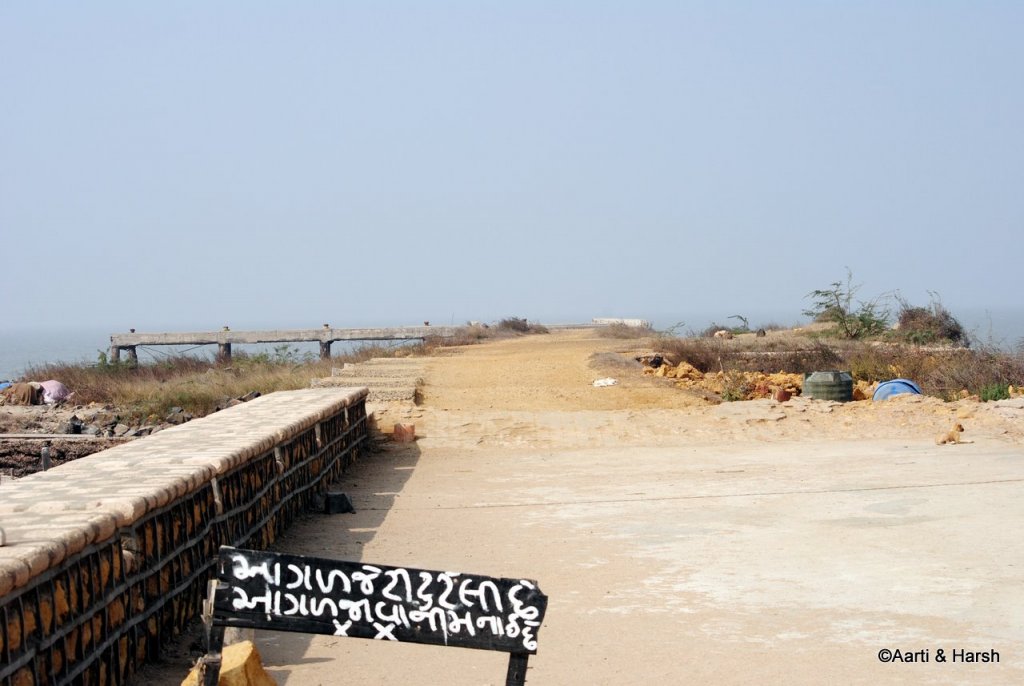 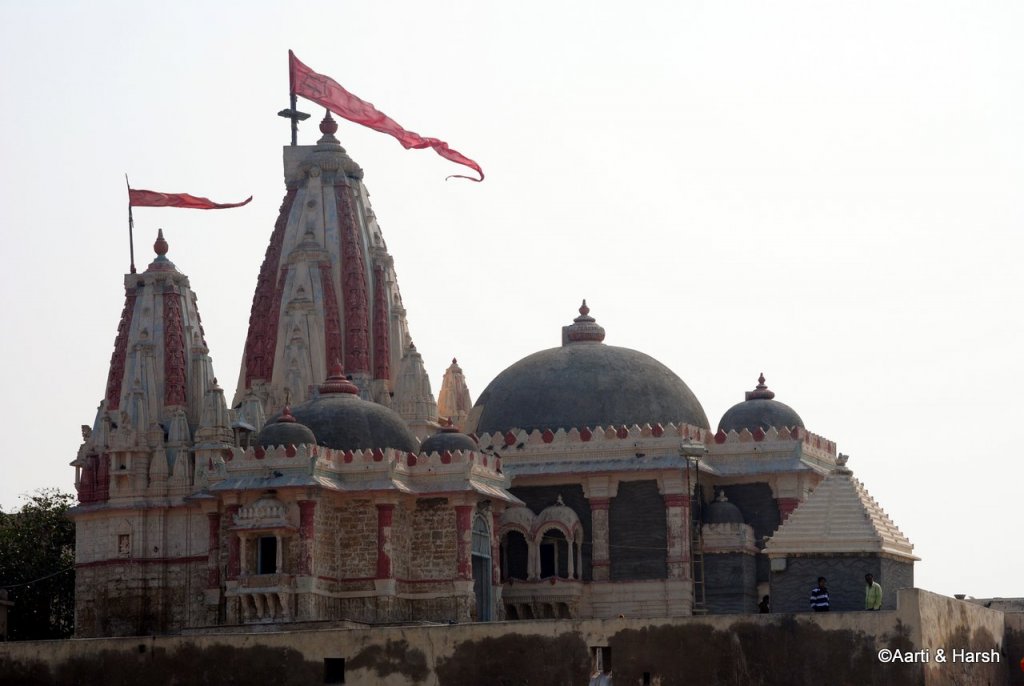 The drive from Koteshwar to Gaduli went through the same wildlife sanctuary. Beautiful as it was, we did not sight any animals. The drive to Nakhtarna was boring, and the distance of about 100 km was covered in 1.5 hours. The roads, though narrow, are in pretty good shape.

Lunch happened at a non-descript hotel at Nakhtarna. Despite our request for non-spicy food, there was a liberal dressing of green chilies even in Dal Tadka! We reached Bhuj by 4:30 pm, well in time to collect our permit for Vigakot from the BSF sector headquarters.

Permits for Rann of Kutch

As it happened with us at the DC’s office in Leh, we had butterflies in our stomachs due to anticipation. However, unlike Leh, major babudom happened here. This irritated the hell out of Aarti (who hates bureaucratic red tape); so much so that I had to drop her back at the hotel and come back to collect the permit.

Finally, after a 2.5-hour struggle and knocking on several doors, the permit was ‘expedited’ and handed over to me at 7 pm. We’d lost another beautiful sunset because of this. The only saving grace was the hope that the permit would make the next day memorable.

Anticipating a long day ahead, we hit the sack early and ditched our plans to go out to look for non-veg, settling instead for our hotel’s nice vegetarian fare.

I hope the travelogue, pictures, and information above traveling from Bhuj to Lakhpat fort and Koteshwar were of help. Please click on the link above to continue reading the next part of this travelogue. If you have any questions or need any other details, please feel free to ask in the comments section below or at our Community Forum, and I will be glad to answer.