The present Spiti Valley road status is open from both Shimla and Manali sides. Manali Kaza road was declared open on May 1st. Rohtang Pass has also been declared open as well as the road to Chandratal road. The campsites at Chandratal however are not yet operational and it will be another week to 10 days before you can find accommodation at the lake.

You can also follow me on Instagram and chat with me live there or subscribe to my YouTube channel and ask a question there to get the latest status of the road at the time of your travel.

To get more information like itinerary, places to visit, and budget planning, take a look at How to Plan a Trip to Spiti Valley – A Complete Travel Guide.

Here is a brief update on the road conditions I have received so far.

There are very mild rough patches around Rampur. But other than that, the road till Kalpa and then Nako is smooth. The descent from Nako to Sumdo is rough.

Sumdo to Kaza is moderately smooth with occasional rough patches. Kaza to Losar is super smooth. Losar to Kunzum is bad and Kunzum to Gramphu is a nightmare with several water crossings in between.

Kunzum Pass and Rohtang are both on the Manali Kaza route. Both these passes are known to receive a heavy amount of snow each year. Due to this, the entire Manali – Spiti Valley stretch remains buried under snow in the winter season.

Chandratal is also located on this stretch and gets closed from late October to early June.

From Shimla’s side, only the road from Karchham to Chitkul via Sangla Valley remains closed until March. The rest of the route remains open throughout the year. 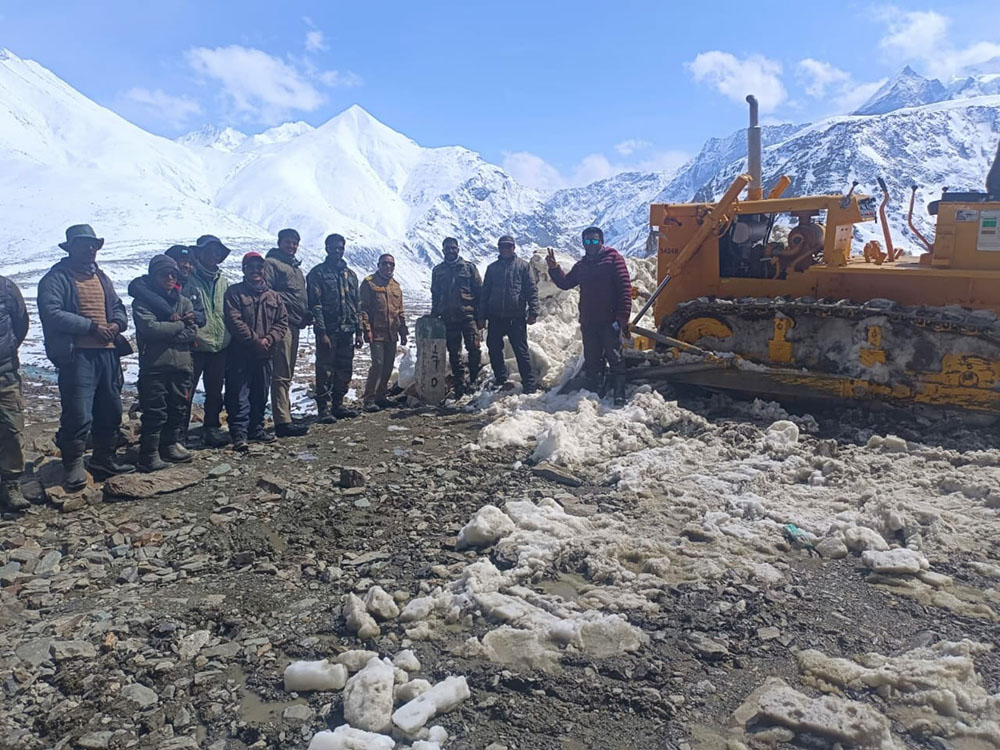 How to Plan for your Trip to Spiti?

If you are planning a trip on the Spiti circuit anytime soon in near future, then continue checking this blog post or the Forum Thread for recent updates. Meanwhile, take a look at the articles below that I am sure will be of help in planning your trip to Spiti Valley.

The list above is a few which I believe are must-know for anyone heading towards Spiti.

Contrary to common belief, the road from Shimla to Spiti Valley actually remains open throughout the year. There could be temporary closure in the winter season if it snowed heavily anywhere on the route. But the authorities clear the snow just as soon as they are able to restore the connectivity.

So starting from Shimla, you can actually visit Spiti valley at any time of the year. The only catch is that between November to May, you will have to keep Chandratal and the entire Manali Kaza stretch off your itinerary.

The road to Chitkul bifurcates from Spiti Valley highway near Karcham and passes through the beautiful Sangla Valley. This entire stretch as well receives quite a bit of snow each year due to which, it gets cut off from the main highway between November to March.

There have been instances when tourists got stuck in Chitkul and Sangla Valley for several days and had to be airlifted out (there have been casualties as well). So if you wanted to include Chitkul in your itinerary, I will suggest planning a trip after April only.

As a tourist, consider the road from Manali to Kaza as closed for this year. I would strongly advise against risking a journey on this stretch now. Blizzards and sudden heavy snowfall in this area are way too common.

Do not forget that you will also be crossing two high-altitude passes to get out and if that did not happen, you will be stuck for good. There have been instances when tourists were caught in blizzards at places like Batal and Chhota Dhara and had to be airlifted out. And yes, there have been casualties as well so do not take the risk.

The status of Kunzum Pass as of today is closed and the road. The estimated date of the opening of the road will be late May to early June in the year 2022.

The road to Chandratal from both Manali and Kaza sides is closed as of now. It will open around May 10th from the Kaza side and after 20th from the Manali side. The campsites at the lake however will not be operational until June 10th.

I hope the information above on Spiti Valley Road Status 2022 was of help. You can also follow me on Instagram and chat with me live there or subscribe to my YouTube channel and ask a question there to get the latest status of the road.

Hi Vargis,we planned for trip from Kaza to Manali by visiting Chandratal on 13th-May ,2022,can you advise on this is possible to visit?

Hi Aravind – Chandratal will be open by 14th but you may not find a campsite up and running yet.

I want to visit Manali via kaza on 15-17 May 2022 with my family, is it possible depending on current situation.

Yes it will definitely be open by then

We want to take a route from kaza to manali in mid October . Is it possible ??

Hi Viresh – No permit needed for the Atal tunnel. The road between Manali and Leh is a mix of good and bad but mostly driveable right now.

Fantastic info. I wish to visit HP upper areas where I can go for viewing snowfall. What will be your suggestion.

please advise : ‘am planning a trip on bike from Jammu – Kashmir – Dras – Kargil -Leh Ladhak -Sarchu -Kelong -Kaza -Manali. 25 May onwards. Is the circuit possible on these days. If no pls suggest me an alternative. Thank you.