This was a totally unplanned Delhi to Kashmir road trip that lasted only 3 days but covered all major tourist spots in Kashmir. We originally had a plan of visiting Bhaderwah during the long weekend from 29th March 18 – 2nd April 2018.

But the plan got changed on the way and we ended up visiting Kashmir instead. Was it tiring? Yes. Did it include long traveling hours? Yes. But did we have fun? Absolutely.

We saw what Kashmir is famous for – beautiful valleys surrounded by snow-capped mountains. Even though unplanned, we were able to successfully able to complete the trip covering 4 of Kashmir’s major attractions – Srinagar, Gulmarg, Pahalgam, and Doodhpathri.

We 4 guys (Arvind, Gaurav, Shireesh, and I) started from the office in Gurgaon on 28th March at 8 pm. The original plan was of reaching Bhaderwah by noon and spend the next 2 days there.

But while exiting Delhi, I got to know that road from Jammu to Srinagar is open for both sides of traffic the next day. This news triggered a change in plan with the caveat of traffic conditions after/around Chenani Tunnel.

A quick 30 mins break was taken at 23:45 before Ambala to have our home-packed dinner and we were on our way to Kashmir.

Our changed plan was that if we reach Anantnag by 2 pm on 29th March, will go directly to Pahalgam and roam around. If we were running late, we will move straight towards Srinagar to finish our day.

We covered a good distance overnight, driving non-stop. We took a breakfast stop after crossing Udhampur at 7:30 am. This was my first visit to Chennai Tunnel and I was excited to enter this 9.2 km tunnel. It was an amazing experience.

A quick de-fuelling break was taken around Ramban at 09:25 and we continued as per our plan. There was no traffic on average roads hence we were moving without any obstacles.

Also Read: How to Plan a Trip to Pahalgam

We reached Banihal railway station at 10:55. I am fond of railway stations so how could I miss taking some clicks at the station. Another de-fuelling break was clubbed with Banihal station and after that, we crossed Jawahar Tunnel (2.5 Kms long) at 11:55.

We reached the valley viewpoint (photo break) where the board says “Welcome to District Anantnag – The Land of Springs” which means we were going to Pahalgam as per our plan.

Roads were fantastic after Jawahar Tunnel. The route was so scenic with a lot of green and yellow on both sides of the road throughout Pahalgam.

Finally saw the board at 13:36 says – “Welcome to Pahalgam” and we continued towards Punjabi Rasoi (Near the Pahalgam Bus stand) to have our lunch.

As we did not have any plan so decided to stay in Pahalgam near Punjabi Rasoi, and did some local sightseeing by pony ride around Kashmir valley, Baisaran, and a few more places. 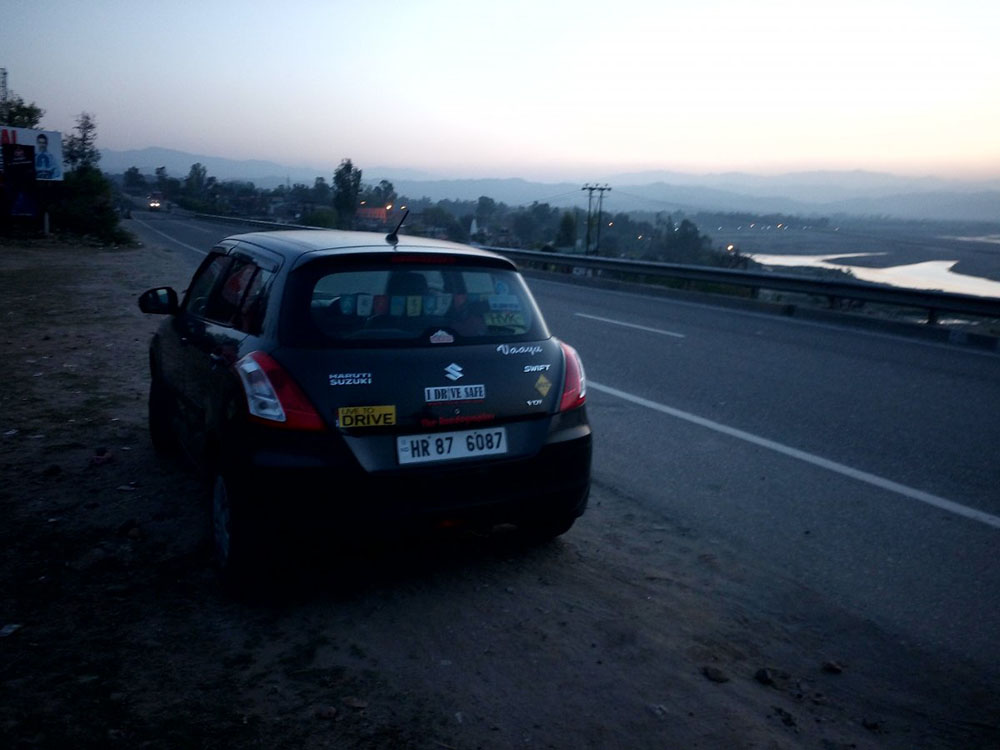 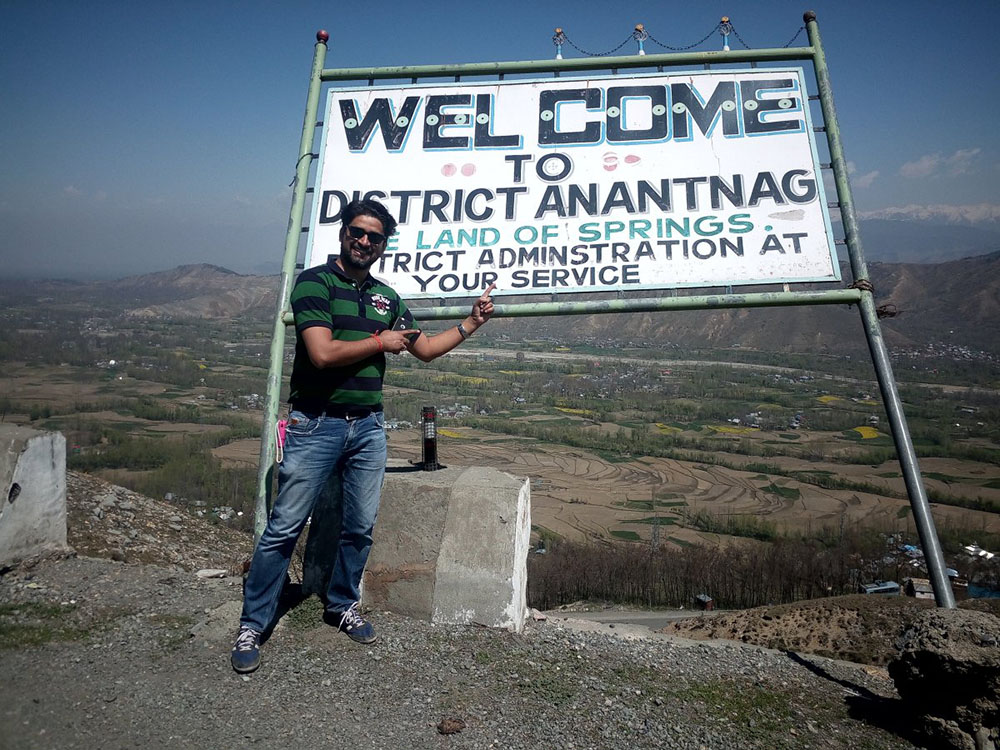 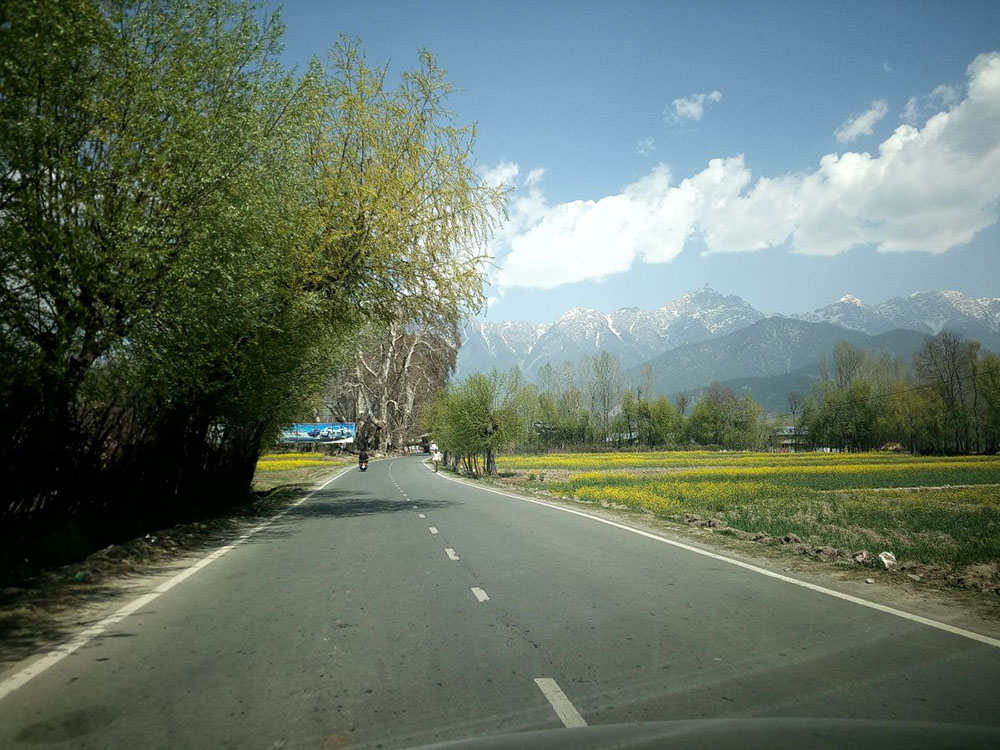 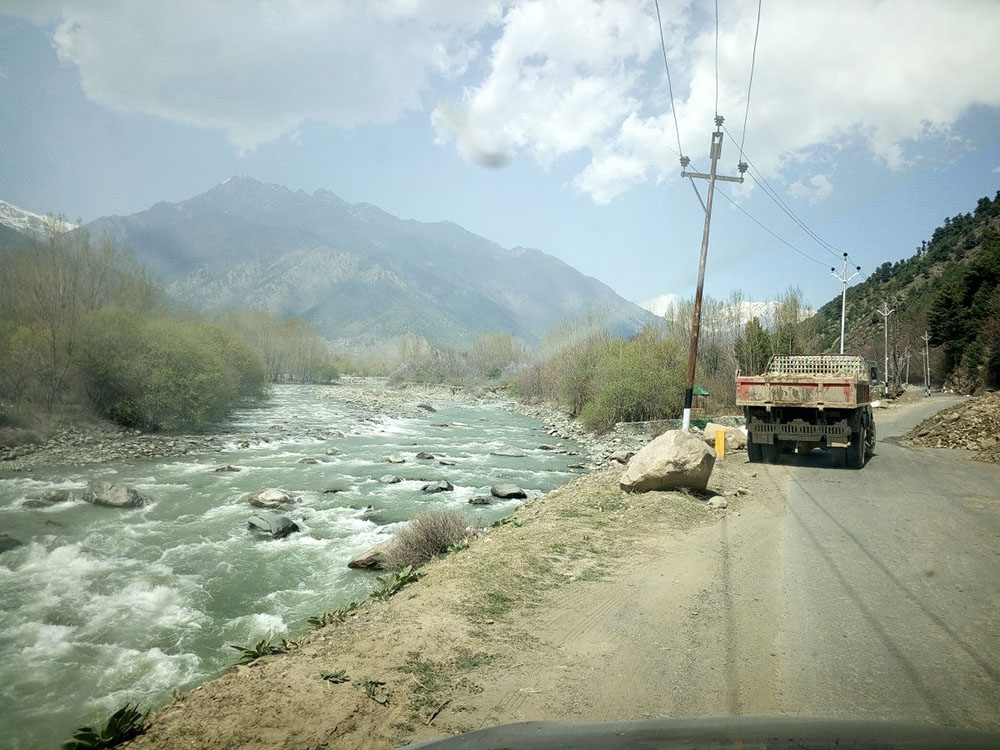 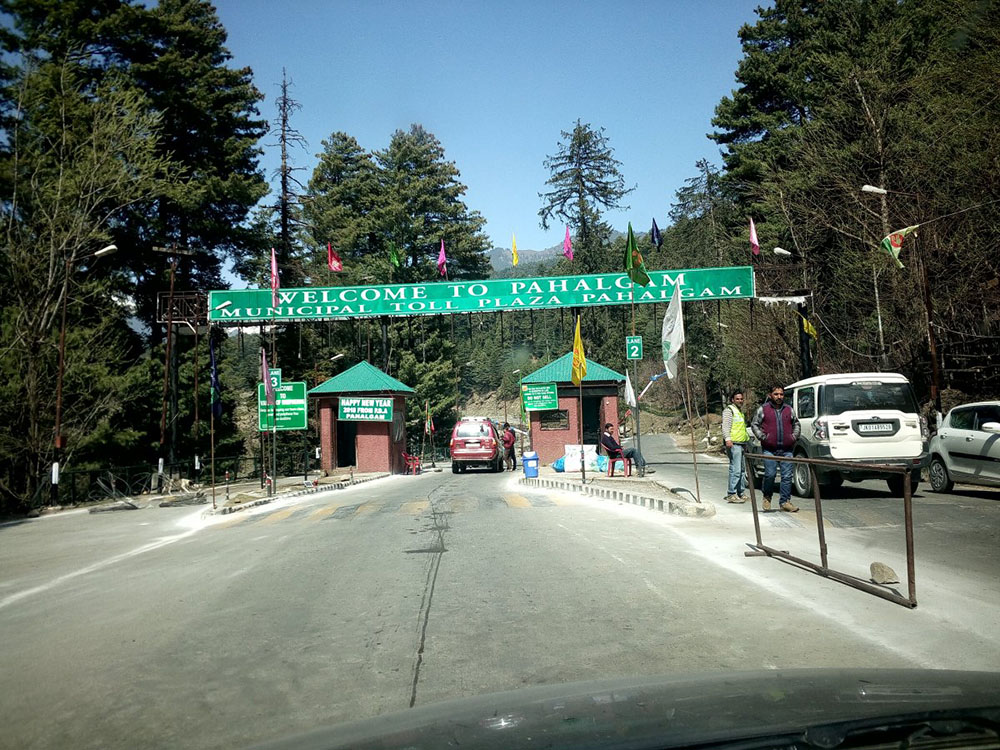 Vaayu (that is what I call my car) was ready after a quick wash. We started early from the hotel at 07:00 to visit Betaab Valley and Aru Valley before leaving Pahalgam.

It was chilling outside but a scenic drive towards Betaab Valley was refreshing. There was a layer of ice formed on the hood of Vaayu. I am guessing the temperature much be close to zero at that time.

We did not spend much time in Betaab Valley and had our breakfast in Pahalgam market then moved towards Aru Valley which was approximately 15 km from there.

Another very scenic drive with flowing Lidder river alongside, we reached Aru Valley by 09:30. Again, we did not spend much time there as we had seen a place where a swift was parked riverside.

We also wanted to spend some time there. I took Vaayu very close to the Lidder river and spent a good time at the riverbed around a beautiful place surrounded by mountains and a river with nobody else around.

We started from Aru Valley at noon towards Gulmarg. It was approximately 3 hours from there. We continued with no breaks as we had to reach Gulmarg on time to catch Gondola.

We finally managed to reach Gulmarg at 15:00 and ran towards the Gondola ticket counter. Phase 2 was closed at 14:30 but we managed to get a ticket to Phase 1 and we were there at 15:40.

There was a lot of snow at Phase 1 and it was crowded too. We spent a good couple of hours there and reached back to Gulmarg around 18:00.

We had some snacks and Kahwa at Gulmarg and started towards Srinagar for our night stay at Sunny Paaji’s beautiful homestay. 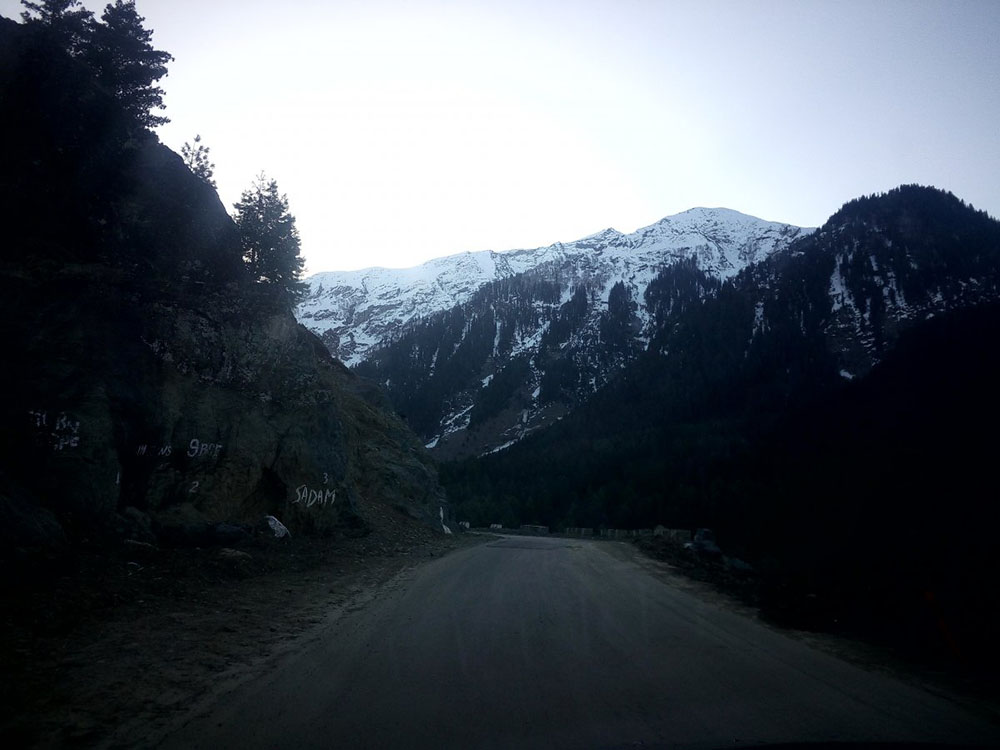 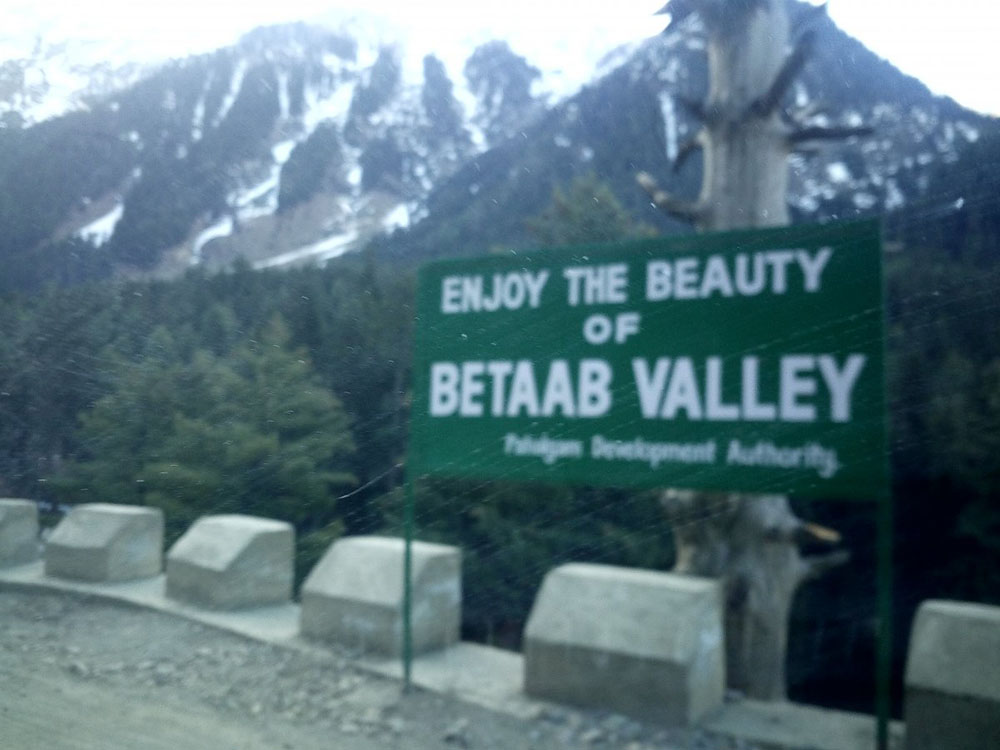 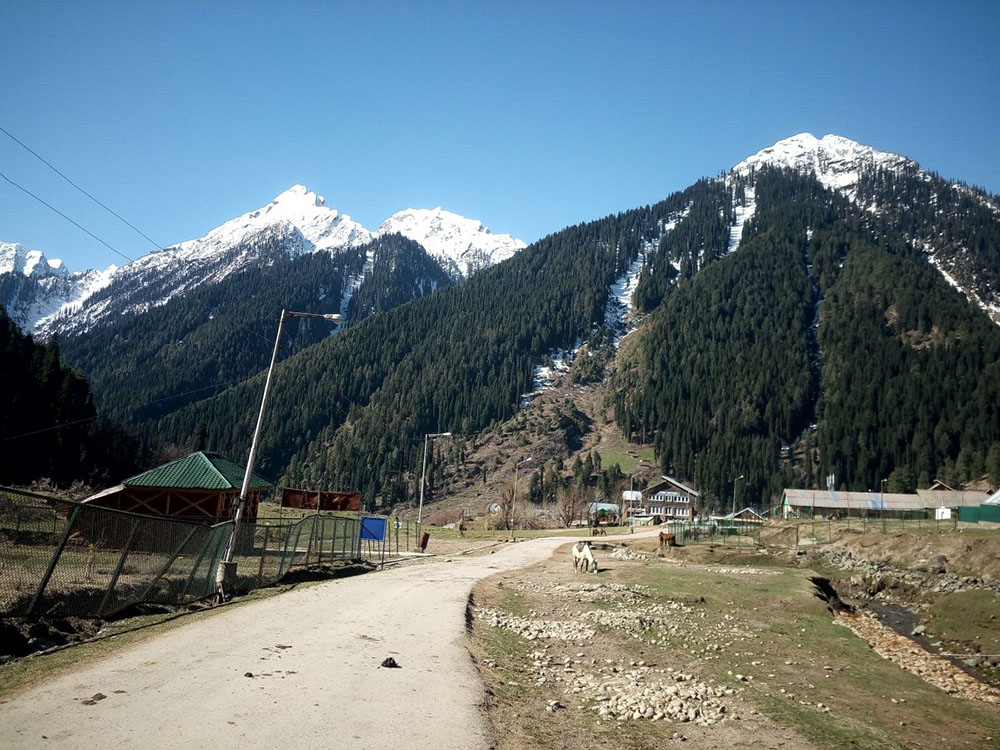 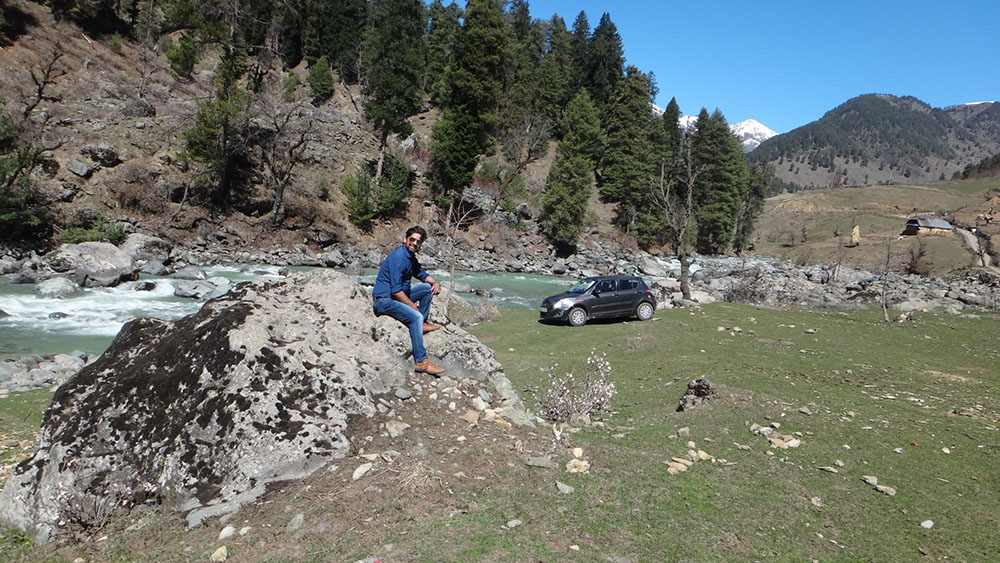 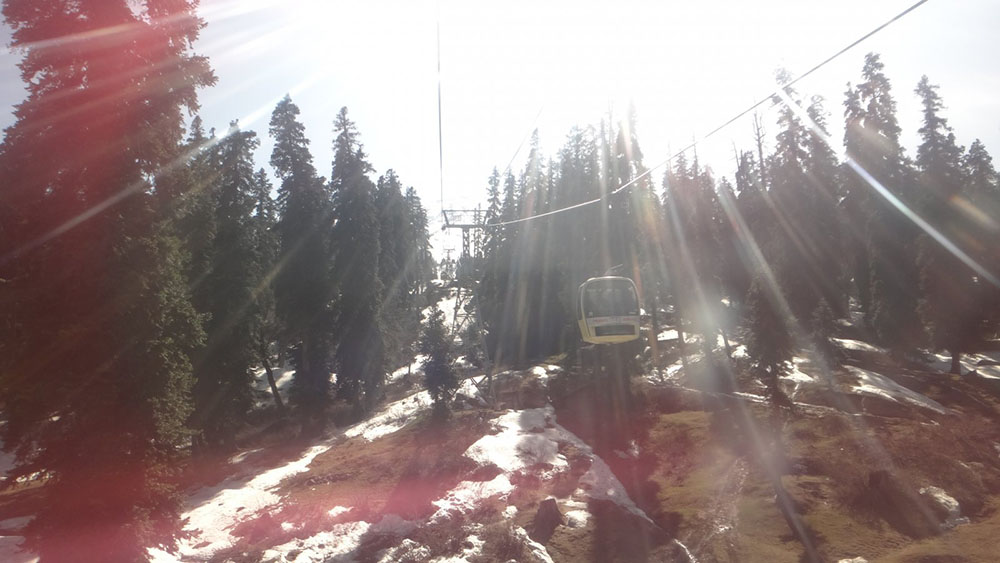 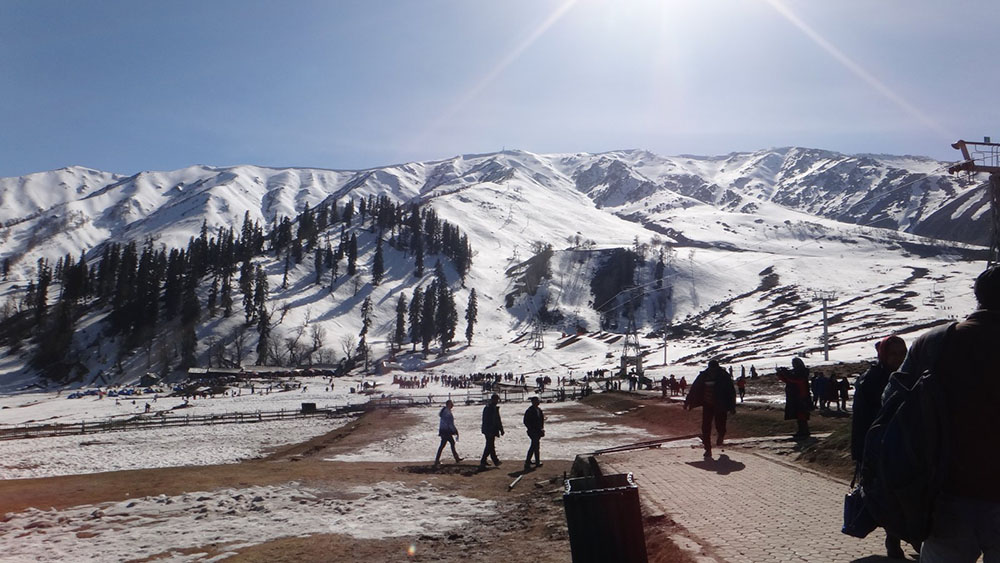 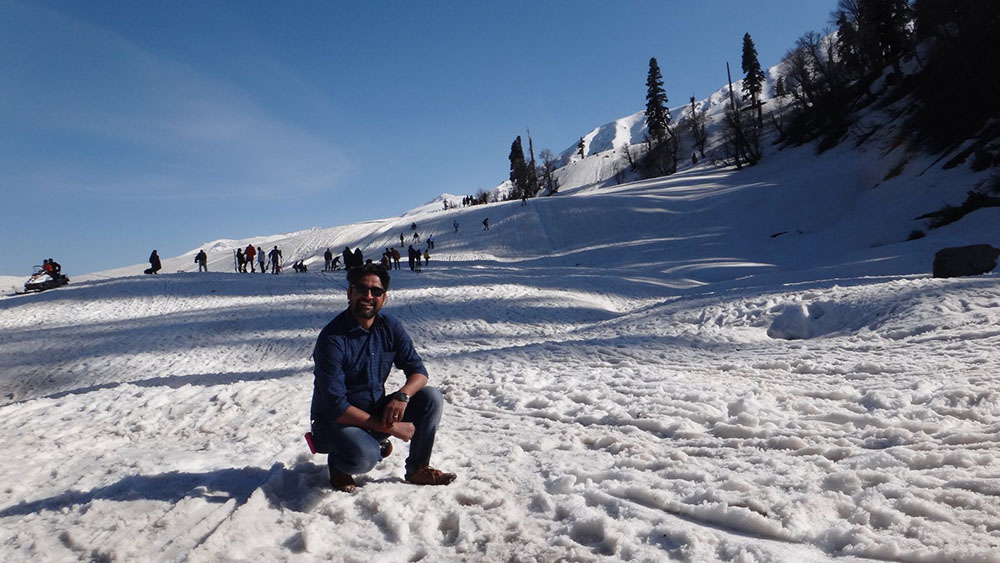 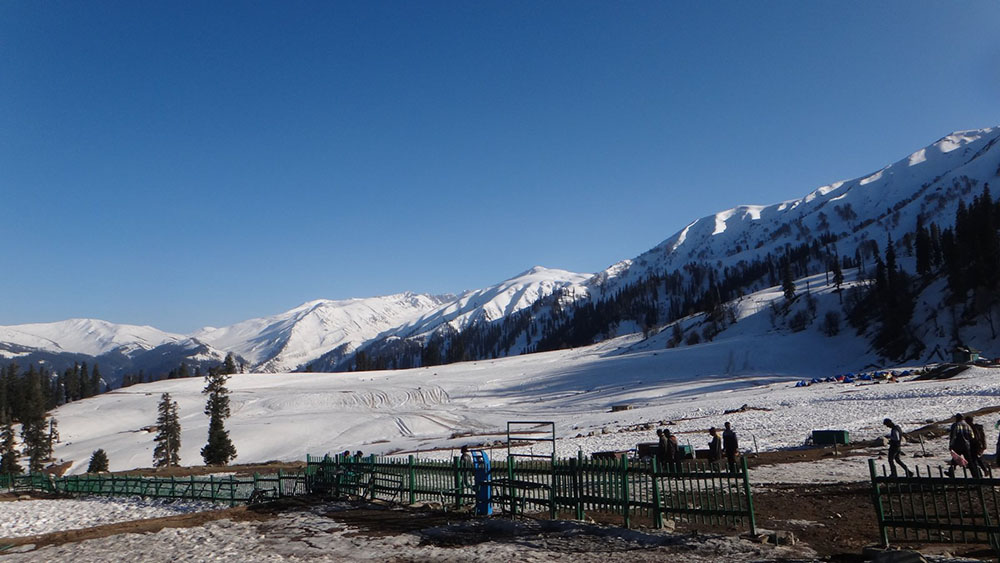 This day was reserved to visit local places in Srinagar only, so we started our day around 8:00 and visited the following places.

This was an easy day visiting beautiful places but the day was unexpectedly hot. We returned to homestay a little late as we spent some time buying dry fruits at Polo view market as suggested by Sunny Paaji. 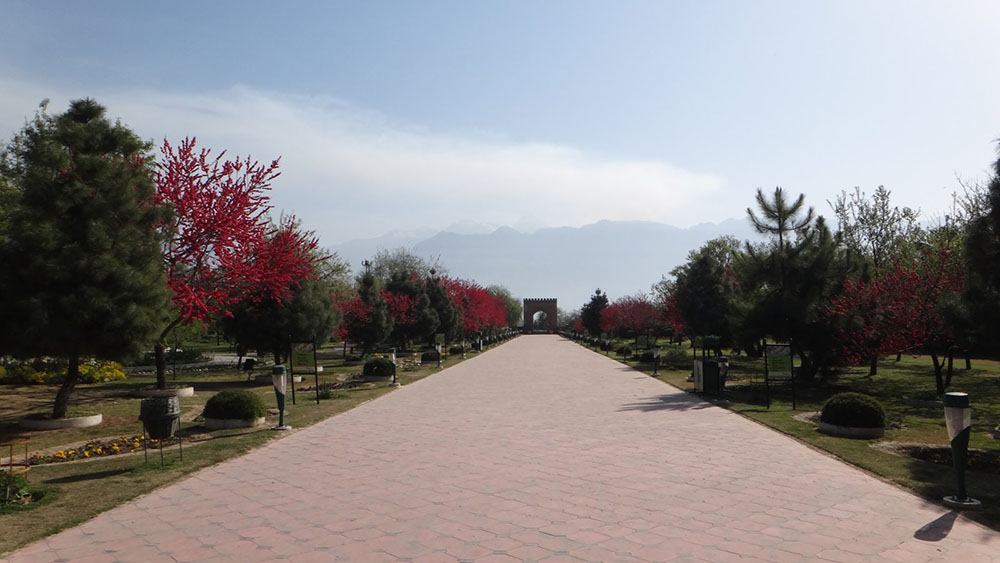 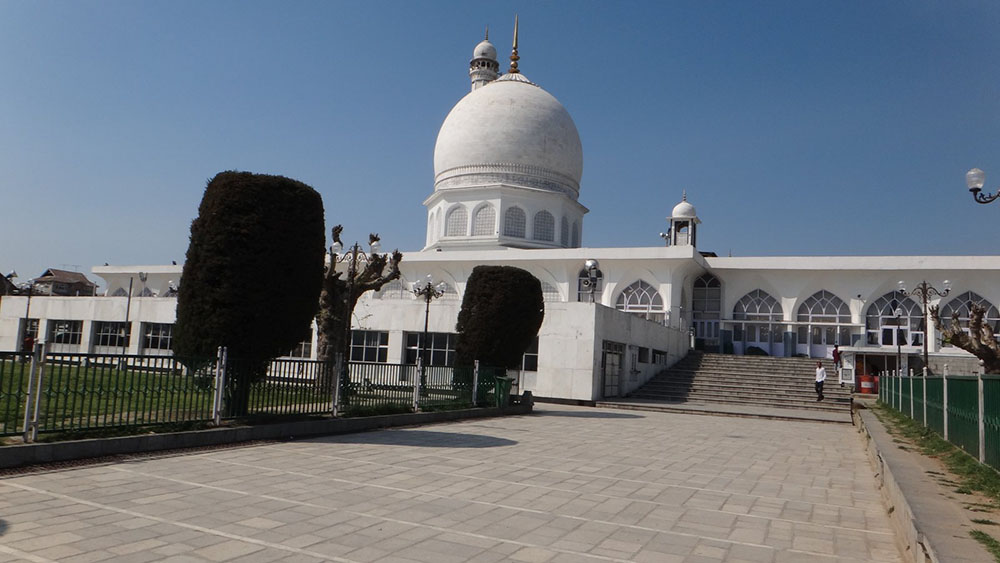 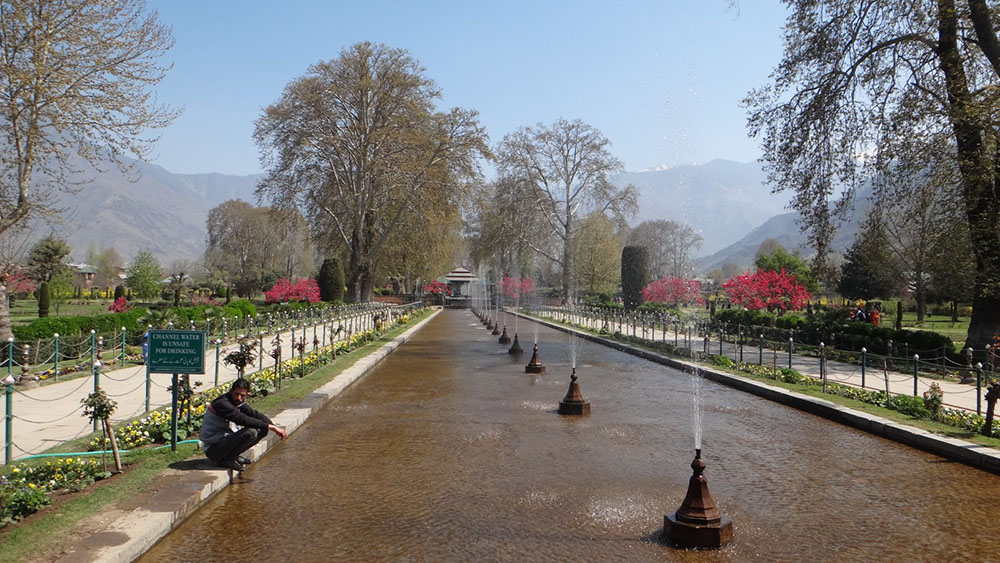 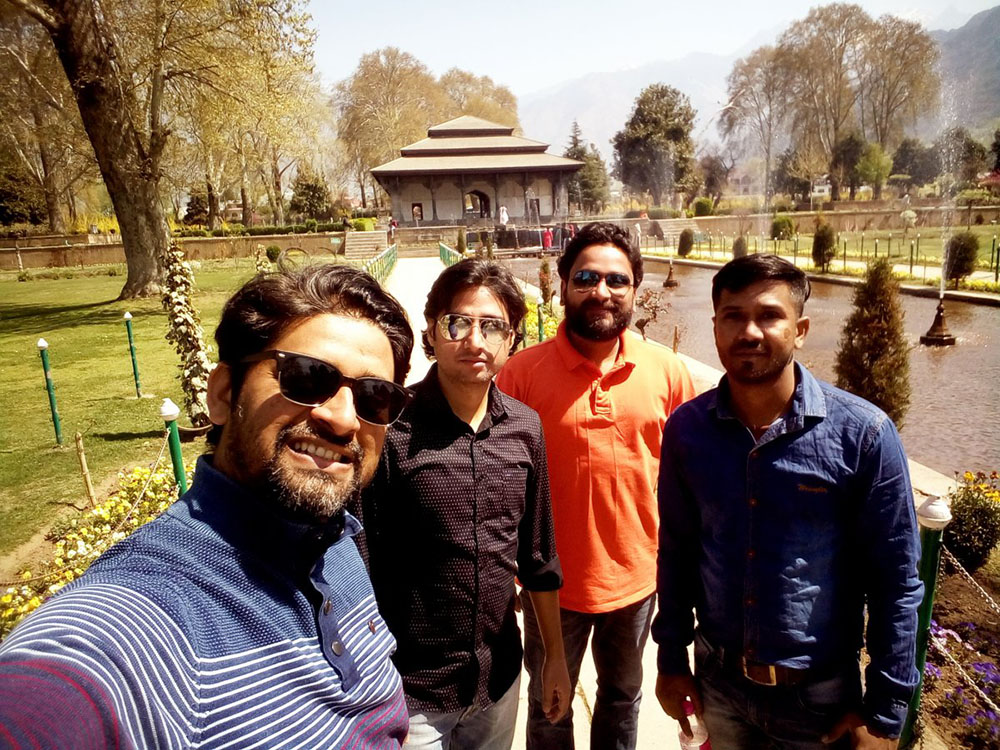 Day 4 – Doodhpatri and Drive back towards Delhi

It was the last day of our Delhi to Kashmir road trip. One place that was still left on the itinerary was Doodhpathri.

Though Doodhpatri was one of the reasons to visit Kashmir, we were skeptical in the morning as I had to reach home as early as possible.

We checked out from Sunny Paaji’s homestay at 08:00 for Delhi. We did some travel time calculations and decided to visit Doodhpatri.

Our drive to Budgam was average. But after that, it was breathtakingly beautiful throughout until Doodhpatri. We reached around 09:30 and we were the only tourists there.

The plan was to visit and move back within an hour and a half. but one of our friends had lost his mobile somewhere under the snow. it took 1.5 hours to find his mobile with the help of some locals. 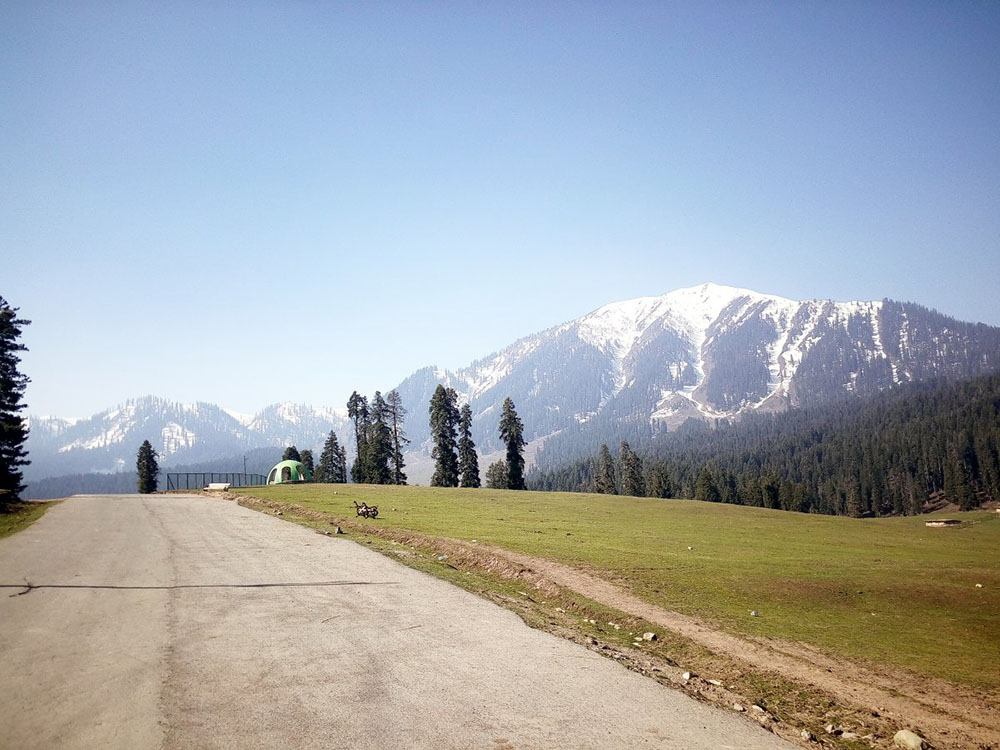 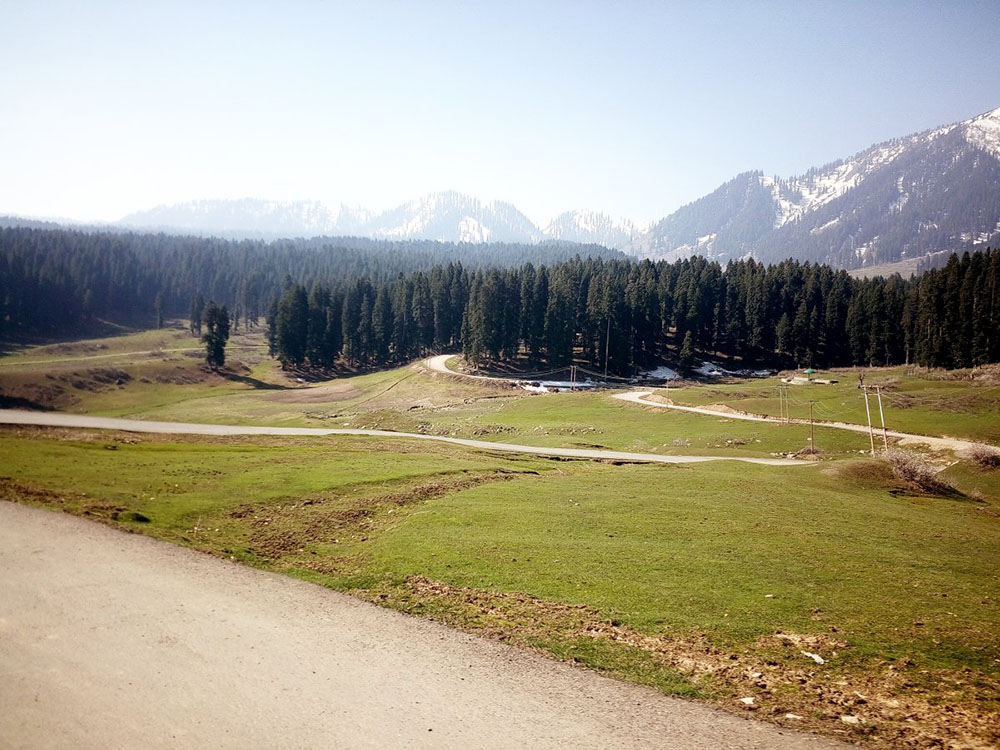 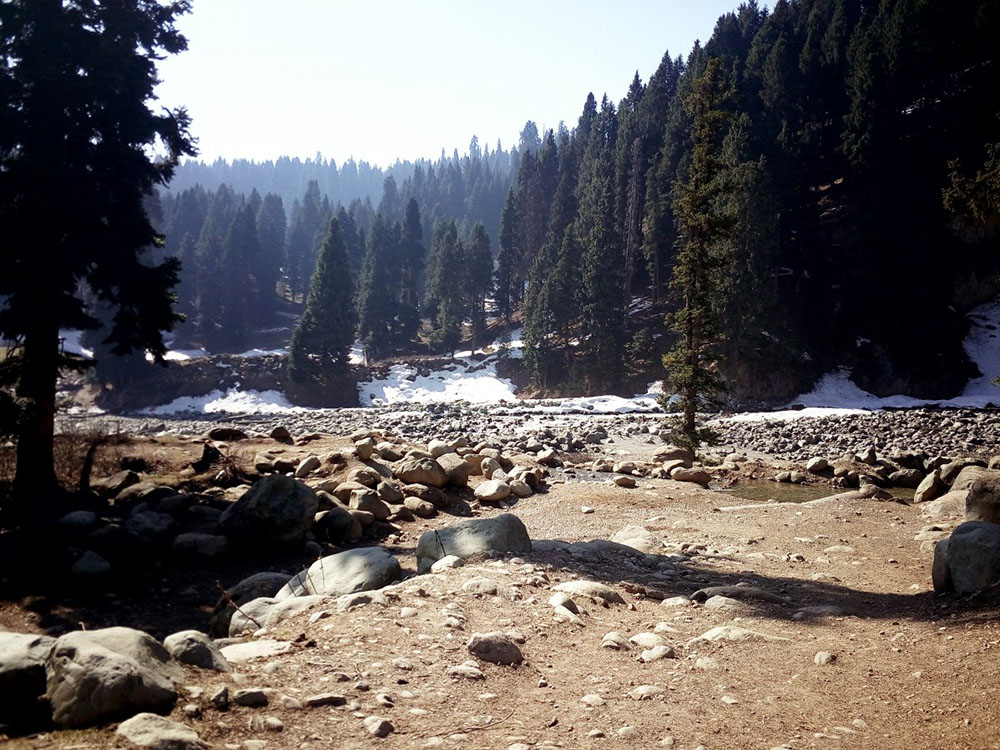 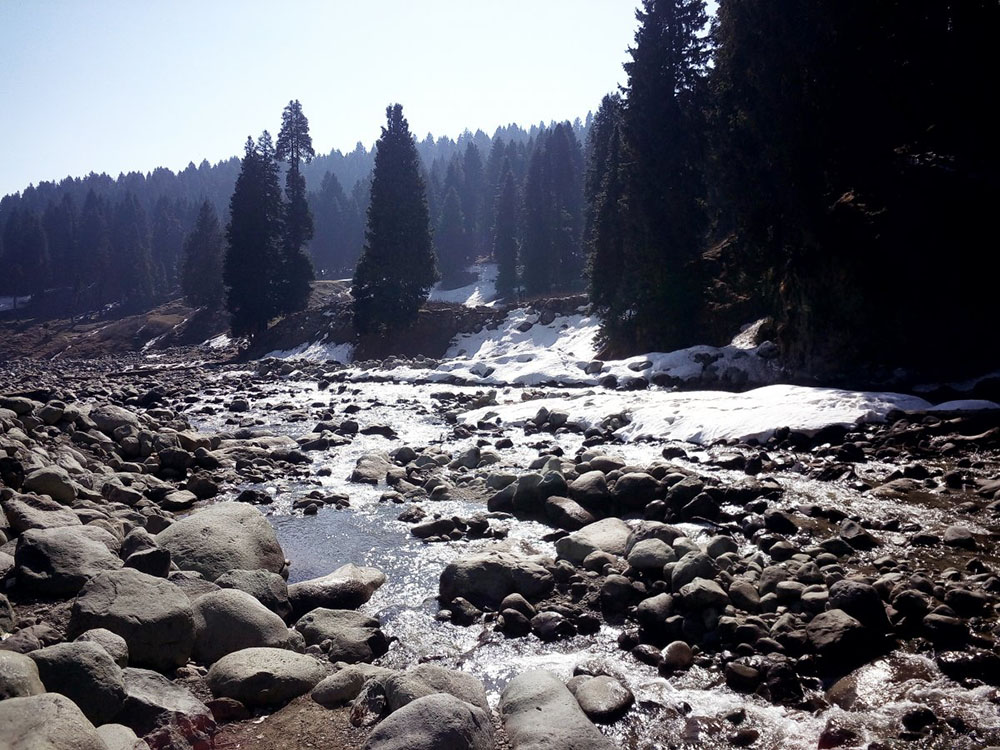 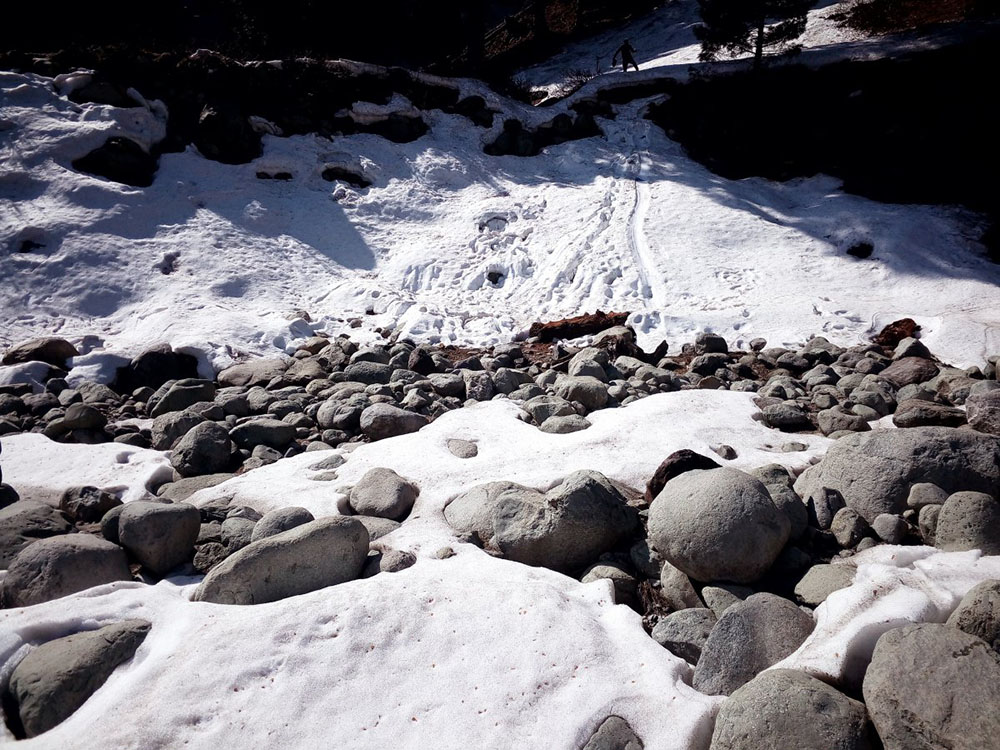 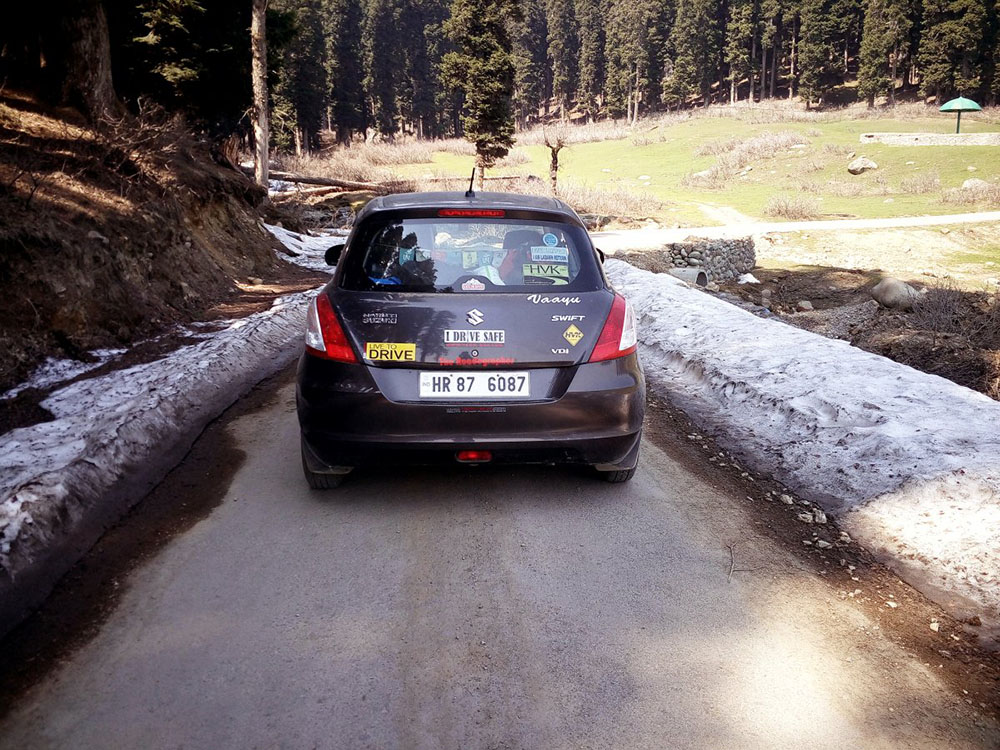 Finally, we started from Doodhpatri at 11:30 which was late as per our plan. We got news of some unrest before Budgam and stone pelting was happening our way. this was a real panic situation for us.

A local told us not to go from the main road. He suggested taking some narrow lanes to reach Srinagar. I made a couple of calls to update our whereabouts as the internet was not working there.

Somehow, we managed to reach Srinagar at 13:00 when curfew was about to get imposed. It was due to some militants being killed in Shopian and Anantnag the same day.

We kept checking road conditions with Army and Police on the way and left the city without wasting any time. The plan was to come out of the problem zone as early as possible.

As the roads were superb, we crossed Qazigund and reached Lower Munda in less than 1.5 hours. I made a quick call to a friend for a quick catch-up.

He was in Qazigund city looking for a place for lunch. He reported that 80% of shops are already closed and the rest are half shutter down already.

We continued without any break (except some de-fuelling breaks) till Kud from where we bought some Patisa as suggested by another friend Sandeep Jandu, crossed Jammu bypass at 19:30 which was fairly quick (Srinagar to Jammu in 6 hours is fast).

We stopped for dinner at my favorite place in Samba – 17 miles. It was a 1.15-hour break with a good meal was such a relief. Another news came up that some unrest is expected the next day due to Bharat Bandh. So internet connectivity will be disconnected in Punjab.

The only impact on us while crossing Punjab was that FasTag did not work on one toll due to no internet. The rest of the chaos happened on NH1 the same day but after when we had crossed, lucky we.

I drove full night and reached Delhi at sharp 06:00, after dropping off the other 3 guys I was home in Faridabad by 07:30.

I hope the travelogue and pictures of our 4 days long Delhi to Kashmir road trip were of help. If you have any questions, please feel free to ask in the comments section below. You can also follow me on Instagram and chat with me live or subscribe to my YouTube channel and ask a question there.