Tourist Places in Aihole – Badami to Aihole to Pattadakal

This article is in continuation to a previous one and a part of my complete Hampi, Badami, Aihole, and Pattadakal trip log. After spending 3 days in Hampi and Badami, our fourth day was spent visiting tourist places in Aihole, details of which I have covered in this post.

We drove from Badami to Aihole, spent the day there, and returned to Badami by the evening so that we could go to Pattadakal the next day. To read the previous part of the post, please click on the links below.

After having lunch at our hotel in Badami, we started for Aihole. The 35 kilometers long drive was pleasant and took us about an hour to complete. We reached Aihole around 3.45 pm.

Aihole (Aryapura of the inscriptions) occupies a unique place in the history of temple architecture of India. It was the experimenting ground for the early Chalukyan Kings (450-750 A.D.) to build temples from the mid-fifth century onwards.

There are around 100 temples at Aihole – 50 within the ancient fortified area and 50 outside. Most of the temples were originally Vaishnavite and later converted into Shivaite temples.

The early temples are of the pavilion type with a slightly sloping roof. Later, experimentation took place to give a cognate shape to the temple roof by adding towers resulting evolution of three distinct types namely Dravida, Nagara, and Kadamba-Nagara.

We first went to the Ambigera Gudi complex.

This is the largest temple among the three temples of the Ambigera Gudi complex. This temple has a Nagara Shikhara, Sanctum, and Mantapa. This temple has two entrances – one from the right and another from the left of Mantapa.

The inner ceiling of the Mantapa has lotus engraved. The doorframe of the Sanctum is highly embellished. The temple stands on an elevated platform and is considered to be a 10th-century creation. 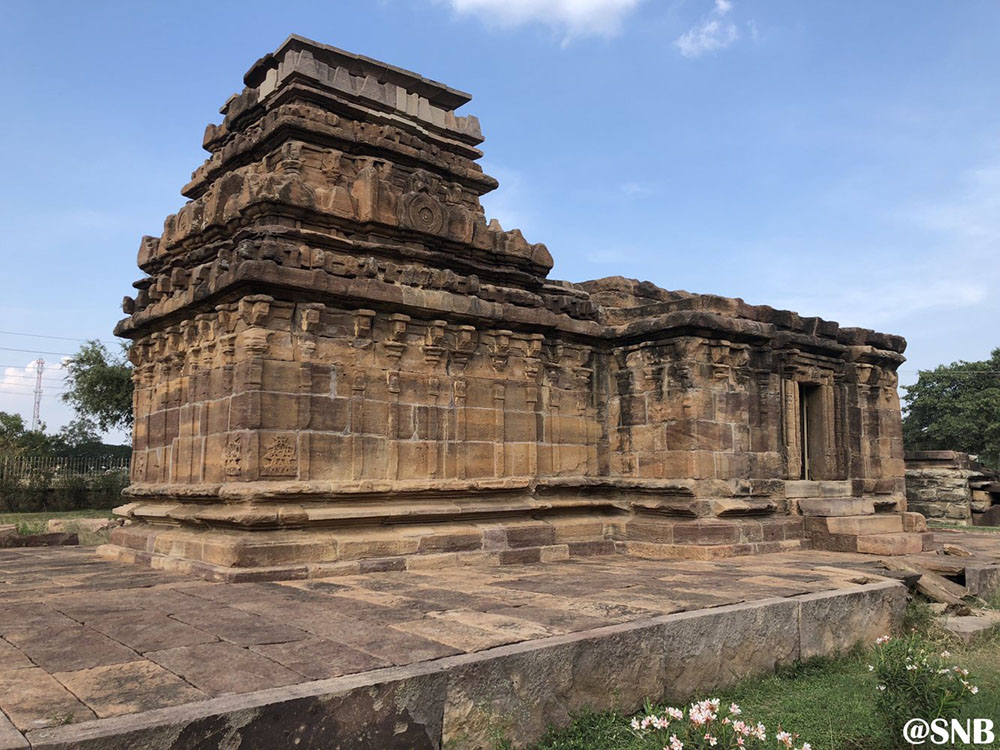 As Ambigera (boatman) community stayed near it, the complex got its name.

From there, we went to another group of temples just across the road. This group of temples is the most visited place in Aihole. There is a museum there but we gave that a pass and straightway went to visit the temples.

We first went to the Durga temple. This is not a temple of Goddess Durga but got its name because of its vicinity to the fort (d\Durga). Though now it is a Shiva temple, originally it was a Surya temple. This temple was built by Atanda Ale Komarasingha during the days of Vikramaditya II.

It is one of the finest examples of experimentation in temple construction that took place at Aihole. The temple is of apsidal shape with its backside resembling the hind part of an elephant (Gajaprasthana). The temple stands on a high pedestal.

It has a fallen Rekhanagara shikhara. Its collonades divide the temple into apse and aisles, and the columns pass behind the apsidal sanctum. 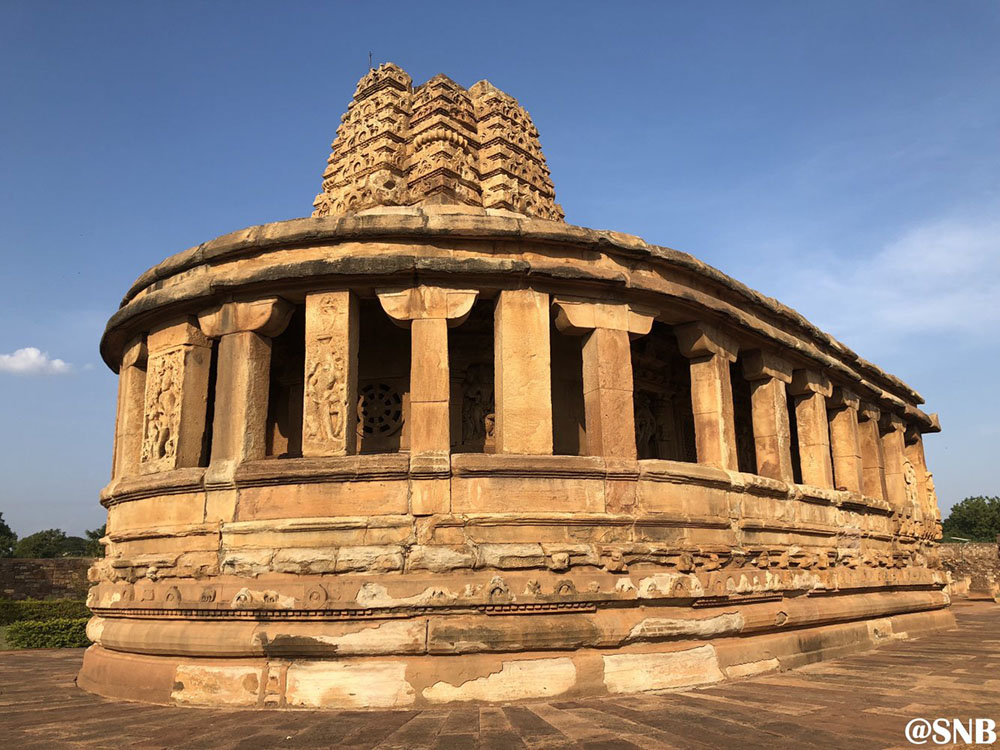 The temple has a frontal mantapa with steps to reach the temple from the east and the west. The temple is surrounded by a parapet and short pillars support its roof with an inner colonnade.

The exterior has fine Ramayana scenes. The Mantapa pillars have figures of Gods and Goddesses and amorous couples. The Devakoshtas on the exterior has Shiva riding Nandi, Vishnu, Mahisha-Mardini, etc.

The next temple on the right side of the Durga temple is the Suryanarayana temple. Assigned to the 7th or 8th century, this temple has a Rekhanagara (curvilinear) Shikhara over garbhagriha. It has a four-pillared frontal Mantapa. The Rnagamantapa has 4 long pillars and 12 half-pillars. The Mantapa has Kakshasanas. 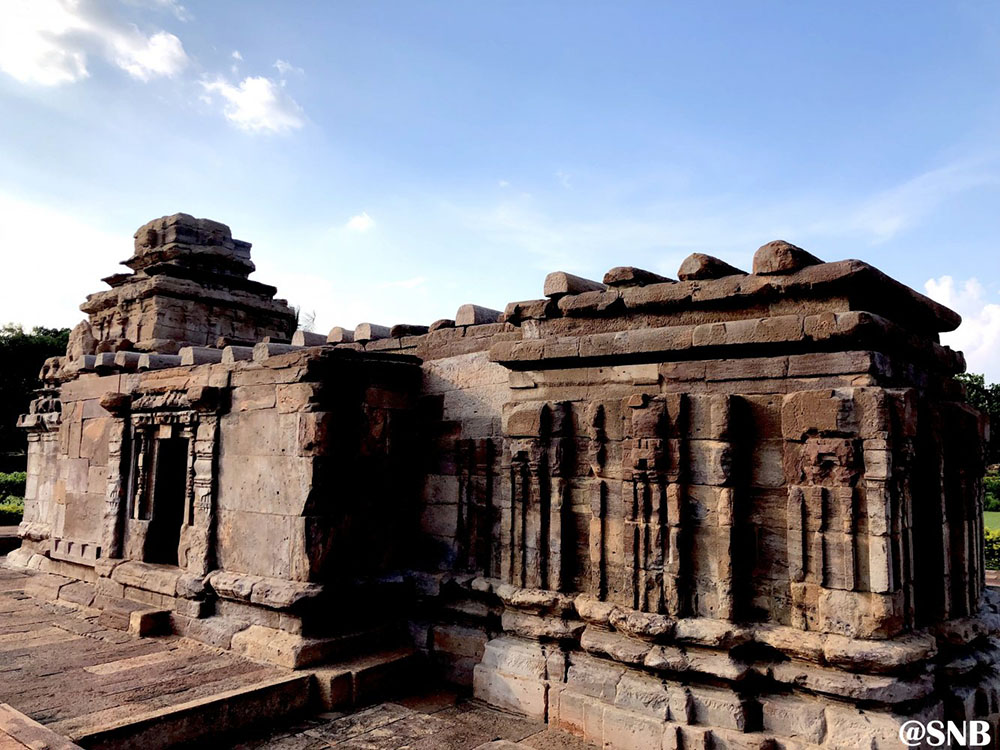 The Garbhagriha doorframe has Garuda at the lintel holding serpents, and also the figures of Ganga and Yamuna. Above that, there is a seated Surya figure. The sanctum has two feet long Surya figure and Mantapa ceilings have peculiar designs with four pillars in the sanctum too.

Lad Khan temple was a hall originally for performing religious functions. Perhaps Pulikeshin I had performed horse sacrifice here. Later, it became a Surya temple and subsequently a Shivalaya.

At the center of the hall is elevated Nandimantapa surrounded by 4 pillars reaching the roof, and is surmounted by partially damaged curvilinear Shikhara with a figure of Surya on the frontal side. From the central pillars, rows of pillars radiate to four corners making it 16 in total.

There is no Garbha Griha and a stone booth is fitted to the back wall of the hall to house the deity. The walls to the east, north, and south have artistic lattice windows. The slanting ceiling radiates from the Shikhara above Nandi at the center. The pillars here are massive.

There is a frontal Mantapa added later with finely engraved pillars. There are fine sculptures of an enormous couple, Ganga and Yamuna. This temple, one of the oldest of the lot, is named now after one lad Khan who had made this place his residence. One of the pillars of this temple has Chalukya royal insignia, Varaha, engraved on it. 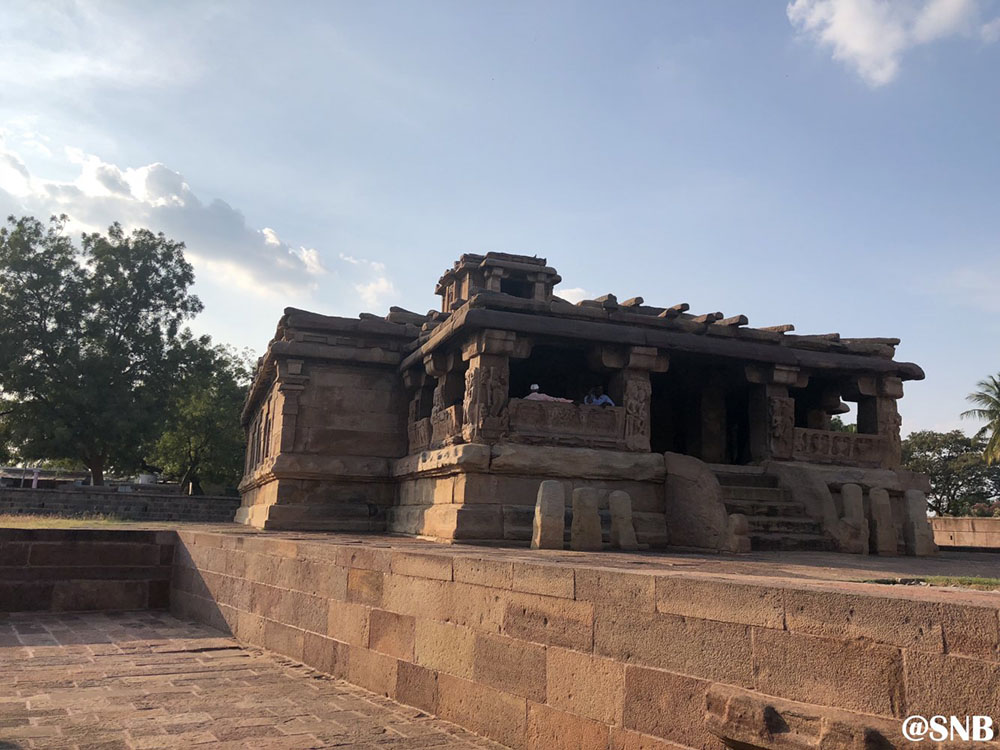 The Gaudara gudi temple appears to be the oldest temple among nearly 100 temples of Aihole which was a great commercial center at the time of Chalukyas. It is a 5th-century temple and it was Mahalaxmi or Bhagavati temple and at the time, the town was known as Bhagavati Kolla.

The temple is on an elevated platform with 16 pillars at the exterior and stone slabs inserted in between to form the wall. Four inside pillars support the slanting roof. The temple has a sanctum with a circulatory path.

There are Kakshasanas with beautiful Kalash decoration behind them inside along the wall. Upper beams are highly embellished with chaitya loops housing a human head. The entrance of the Garbhagriha has Garuda at the lintel with Gajalakshmi with four elephants above it. 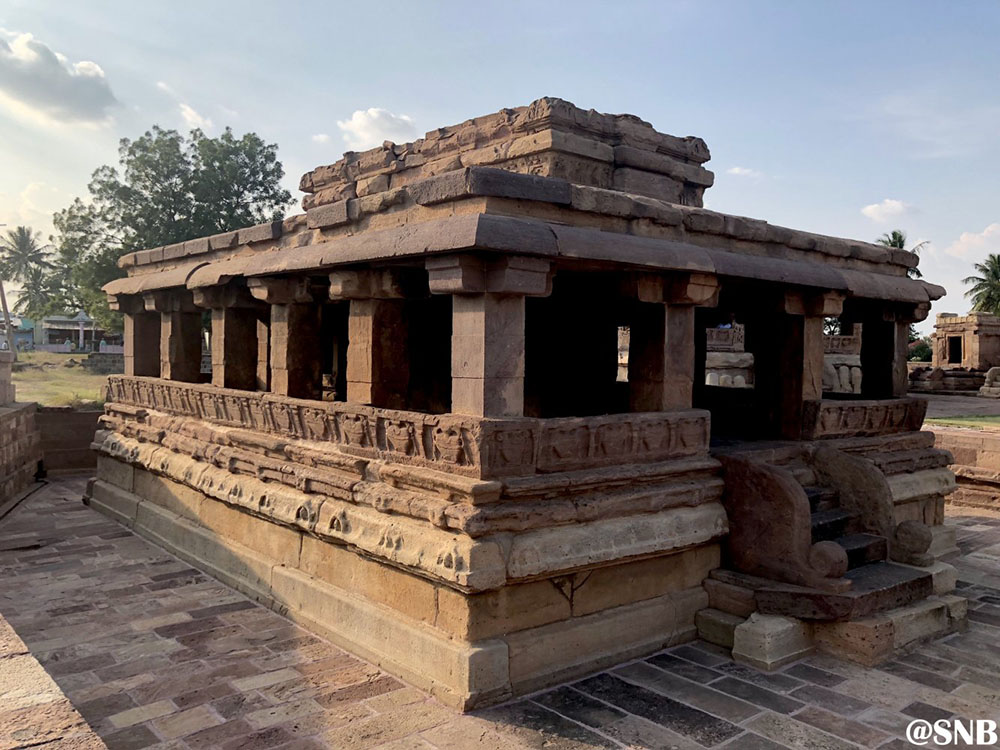 Assigned to the 9th century, Chakragudi is known for its 20 sculptures of the amorous couple engraved on the doorframe of the sanctum which has Garuda holding two snakes on the lintel. Above that, there is a relief sculpture of Dravida Shikhara. The temple has a Sanctum, a Rangamantapa, and a Nagarshikhhara on the Garbhagriha. There is a prominent round Amalaka at the Stupiwhich may have brought the name Chakragudi to the monument. 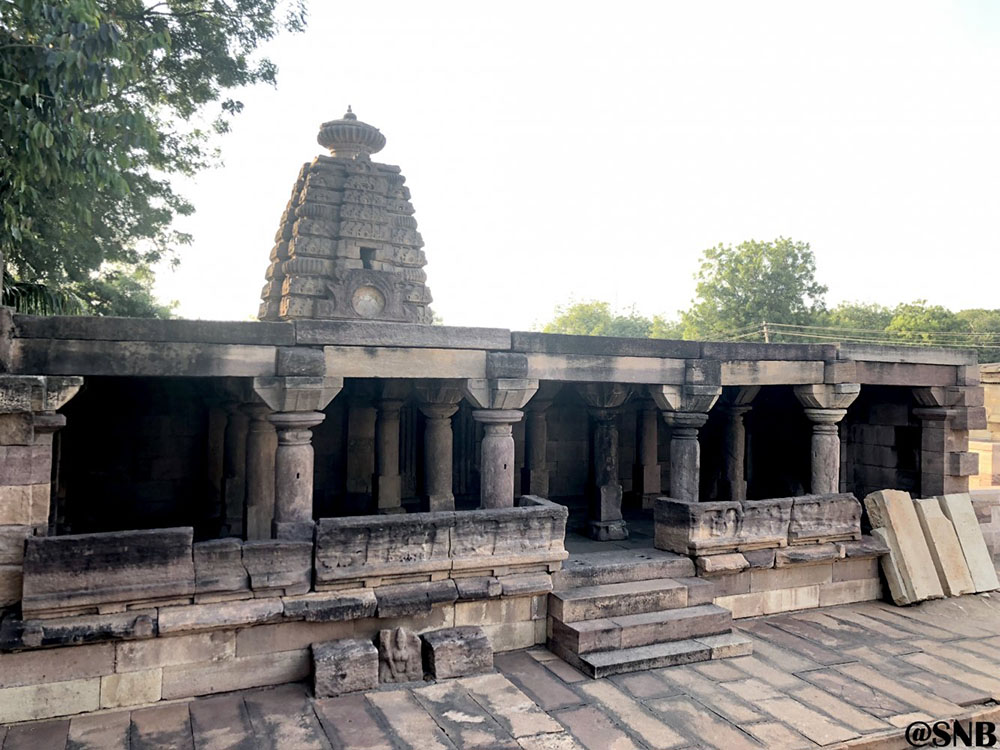 Assigned to the 9th century, Badiger Gudi is originally a Sun temple, as indicated by the Surya image on the projections of Rekhanagara (curvilinear) tower on the garbhagriha. The temple, in addition to the garbhagriha, has a Rangamantapa and Mukhamantapa and there is an image of Dakshabrahma in the temple. 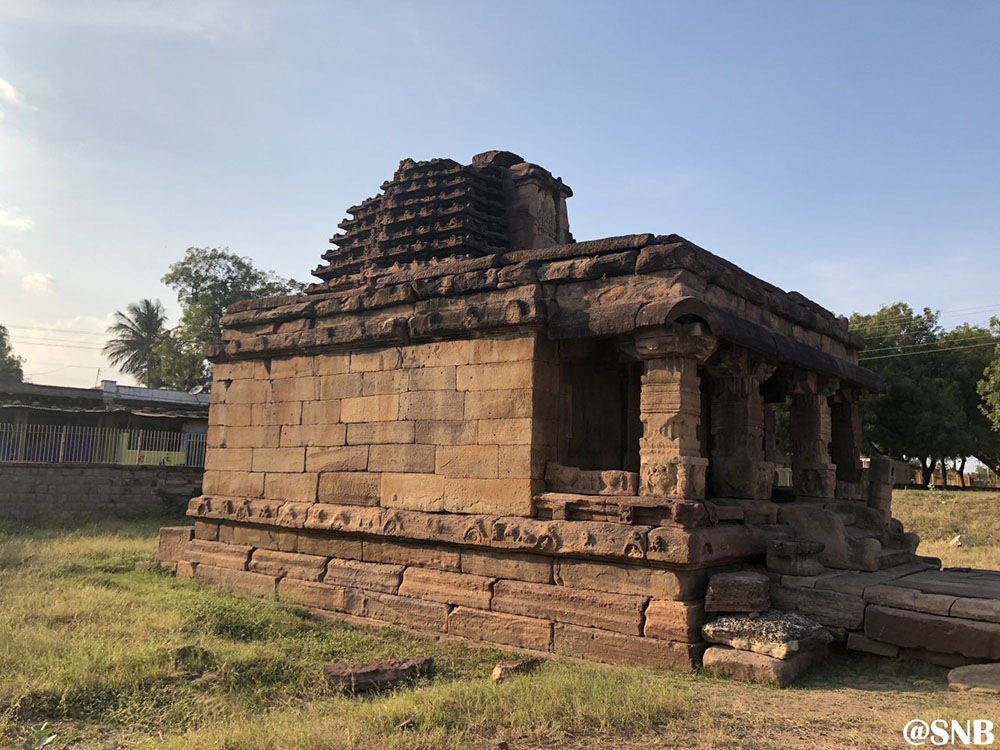 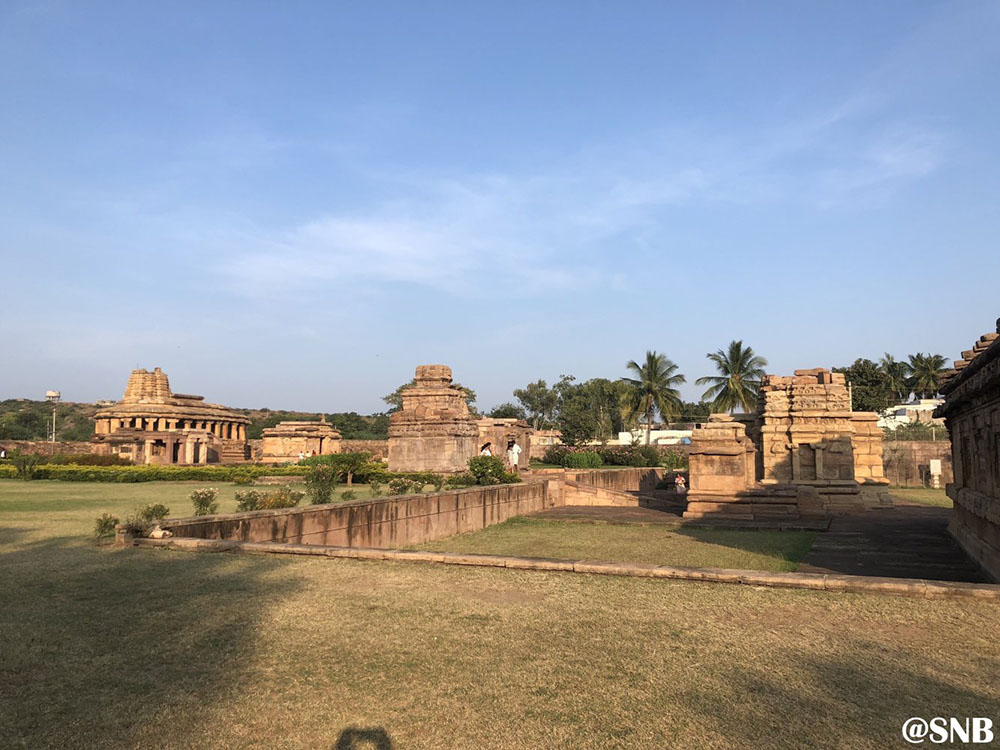 The next temple complex we visited is the Jotyirlinga complex. There are 16 beautifully sculptured temples in this complex but most are in ruined condition. There is an 11th century Vishnu temple of Kalyani Chalukya style with Vishnu image in sanctum.

Fine images of Surya and Mahisha Mardini are there in this compound. There is the 12th-century Sangamanatha temple, Bramha temple, Parashurama shrine, and Ramalinga temple. Ramalinga temple is a practicing temple. 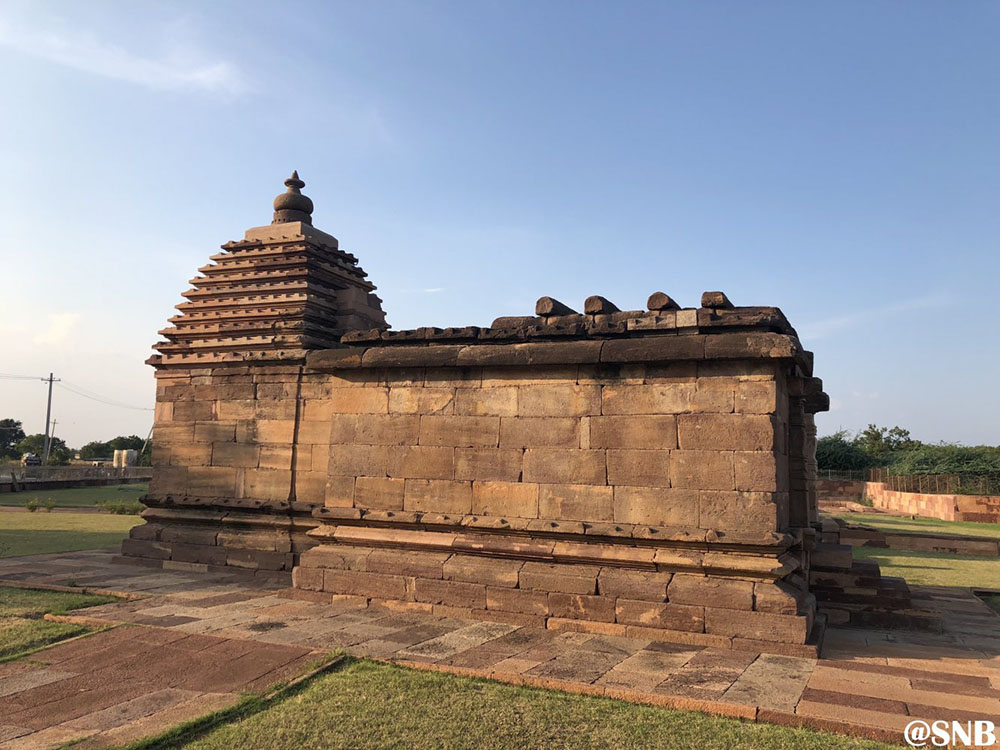 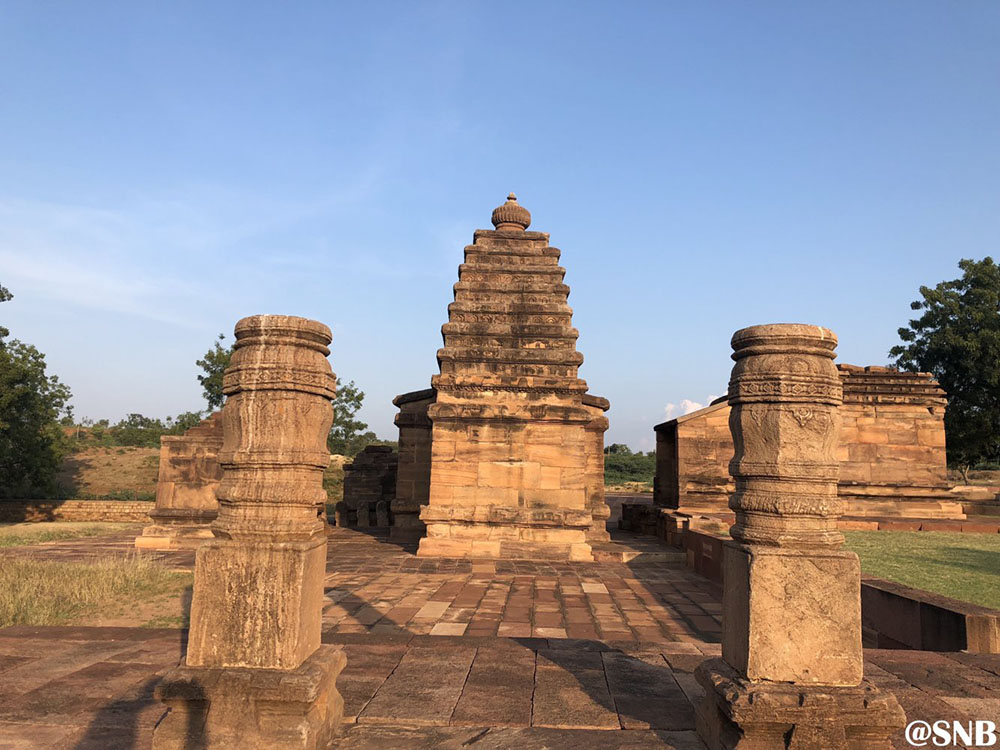 After seeing the Mallikarjuna complex, we started for Pattadakal but took a brief stop to see the roadside Thryambakeswara complex. This site is not being maintained by ASI or any other government agency.

There are two monuments in this complex, standing on an elevated Adhisthana, facing west and they are 12th century Kalyani Chalukya work. There is a common vestibule for Garbhagrihas in each of the temples. The columns are square at the base and circular at the top. 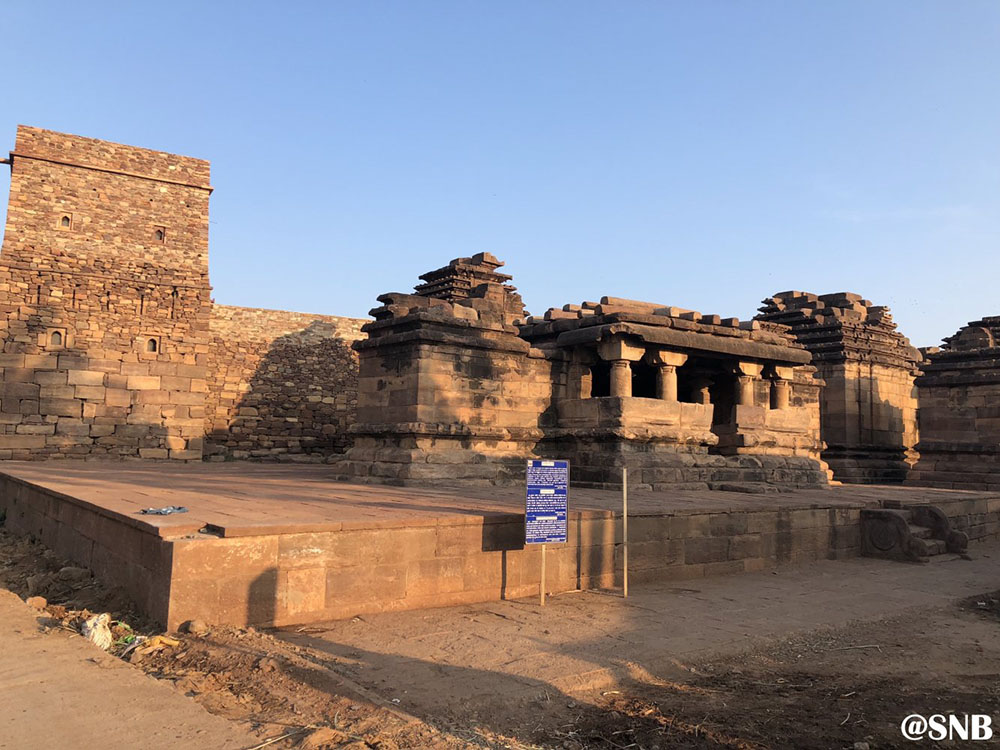 Finally, we left Aihole around 5 pm. We spent around 1 hour 15 minutes which was grossly insufficient. To see all the tourist places in Aihole properly, one needs to spend at least half a day if not a full day.

As mentioned above, Aihole has nearly 100 temples. Prominent temples/temple complexes are

During our short visit, we noticed that only 5/6 complexes are being well maintained by ASI, and the rest are unprotected. Aihole is a hallmark of temple architecture and it should be preserved and protected carefully.

We reached Pattadakal around 5.30 pm. The complex closes at 6 pm. So, we decided to visit Pattadakal the next morning and headed towards Badami. Please click on the link above to continue reading the next part of this travelogue.

I hope the travelogue, pictures, and information on tourist places in Aihole were of help. If you have any questions, please feel free to ask in the comments section below or at our Community Forum, and I will be happy to answer. You can also follow me on Instagram and chat with me live there or subscribe to my YouTube channel and ask a question there.