Sightseeing in Badami – Places to visit in Badami

This article is in continuation to a previous one and a part of my complete Hampi and Badami trip log. After spending 2 days in Hampi, our third day was spent sightseeing in Badami. Early in the morning, we paid a visit to Badami Cave temples and came back to the hotel for breakfast.

The plan was to start again after breakfast, see the places to visit in Badami, and be on our way to Aihole. To read the previous part of the post, please click on the links below.

We started from KSTDC Hotel Maurya Chalukya around 10 am after having breakfast.

Sightseeing in Badami – Places to visit in Badami

Our first destination was Malegitti Shivalaya. The approach road from NH267 for this temple as well as other attractions is in very bad condition. The roads are narrow, through the marketplace and densely populated area and without proper direction and full of potholes.

We missed one turn and reached a dead-end reversing the car there was a hellish task. Finally, after a lot of effort, we managed to reach the base of Malagatti Shivalaya. There was some open space where we parked our car. There was no proper parking lot. By that time, almost half an hour had gone.

From the place of parking, it is required to climb up using stone-cut steps to visit the temple. It is perched on a rock outcrop. 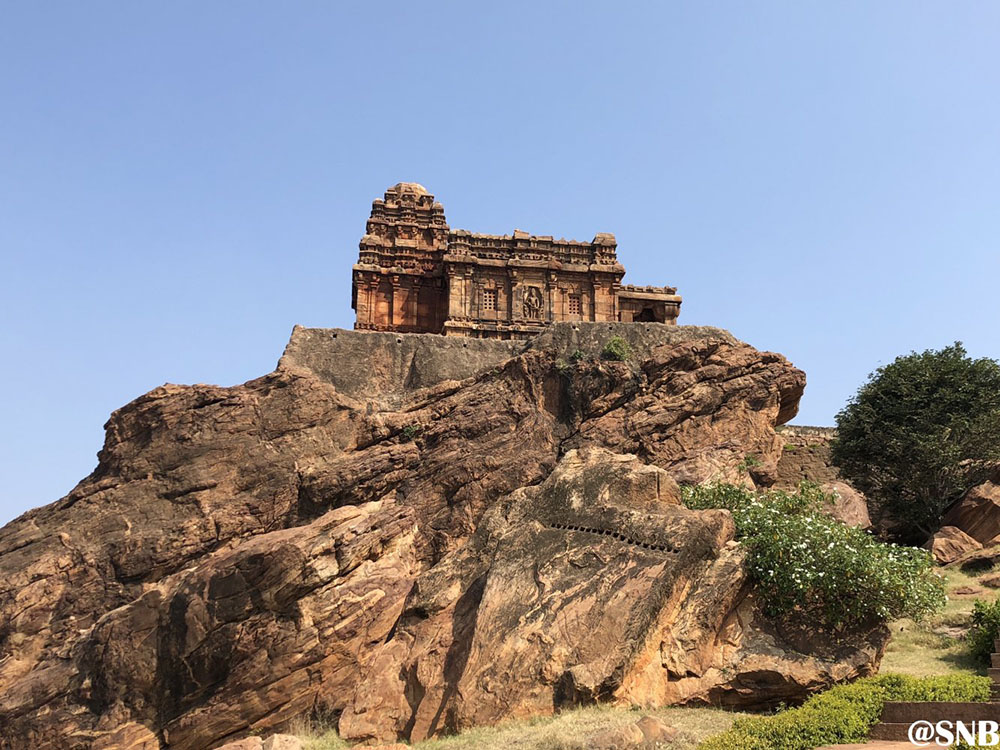 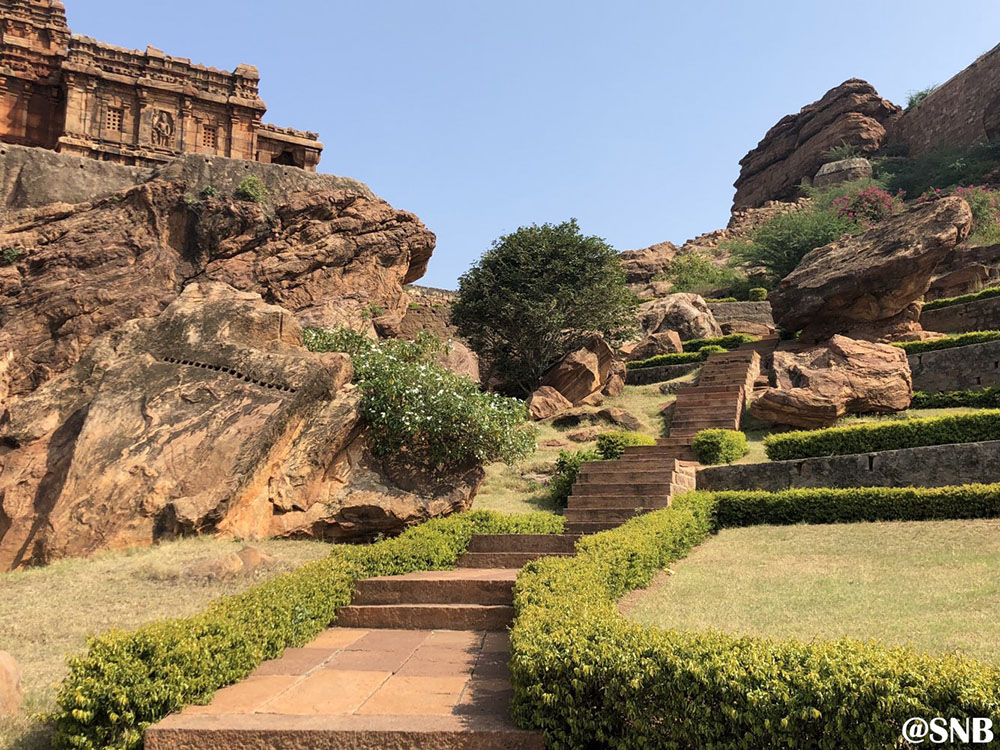 This is a 7th-century temple. The temple is East facing and of Dravidian style. Originally dedicated to the Sun-God Aditya, the temple consists of an open porch, a rectangular head, a small vestibule, and a square sanctuary enshrining a linga. Sanctuary’s decorated door frame includes a band of snakes held by Garuda on the lintel.

On the architrave is a relief of seated Sun-God riding on a chariot drawn by seven horses. A relief accommodated in the vestibule medallion containing Vishnu riding on a Garuda. The entrance of the hall is flanked by deep niches that contain sword-bearing door-guardians Dinda and Pingala.

In elevation, the temple comprises of a typical Dravidian basement with emphasis on high Kantha (Neck), walls with Kudya-Stambhas (thin pillar reliefs), and Kapota (Cornice) topped by Hara (Parapet). The sanctuary’s superstructure is comprised of the dwarfed first storey, complete with parapet.

The Griva (Neck) is capped by an octagonal Shikhara (Dome). Four corners miniature Kutas hide the neck part. The Stupi (Pot-final) is missing. The niches of the exterior of the hall accommodate beautiful figures of standing Shiva attended by ascetic devotees (south) and standing Vishnu attended by Kaumodaki (Gada or Mace personified as a lady) and Garuda.

Both show some features typical of late Gupta sculptures-style noticed in 6th Century CE in the Malava region in Northern India.

It took around 30 minutes to complete the visit to Malagatti Shivalaya.

Our next destinations were Badami Fort, Lower Shivalaya, and Upper Shivalaya. There is a narrow road in that direction from where we parked our car. However, I did not get the courage to take the road.

So, we came back to NH367 and tried to find out the right approach road from the highway. But that did not work and we finally came back to the parking lot of Cave temples and decided to go to the other attractions from there on foot.

At the base of the northern rock, there is a museum. We decided to give it a pass and started our trek passing through a huge entrance gate.

There is a stepped path for going to the top of the northern rock. The path is flanked by huge orange-red rocks with mysterious narrow and deep clefts. 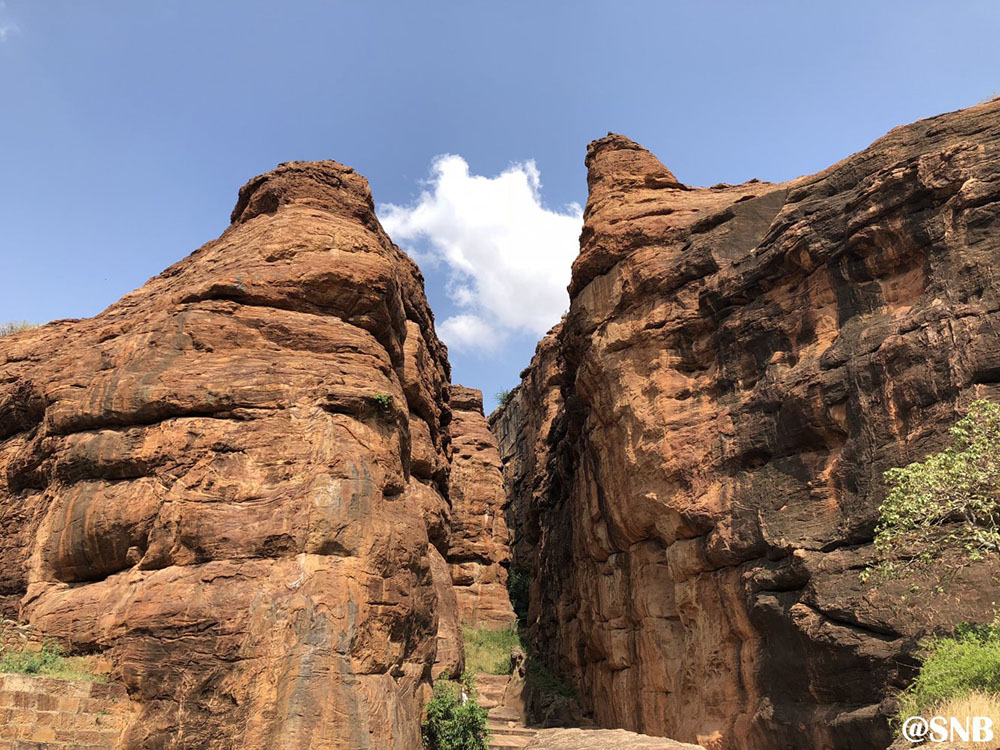 After some time, we crossed another gate.

After crossing the gate, the road bifurcates. The left branch goes to lower Shivalaya. The right branch continues to ascend towards upper Shivalaya and Badami fort.

The lower Shivalaya, perched on a high point of the protruding rock overlooking the town, dates from the 6th Century CE. It represents a Dravidian-style temple of the early phase of Chalukyas of Badami and apparently owes its creation to royal patronage.

Originally it comprised of a small porch, a hall, and a double-walled sanctuary with an ambulatory around. Now only the inner sanctuary part of the structure exists. 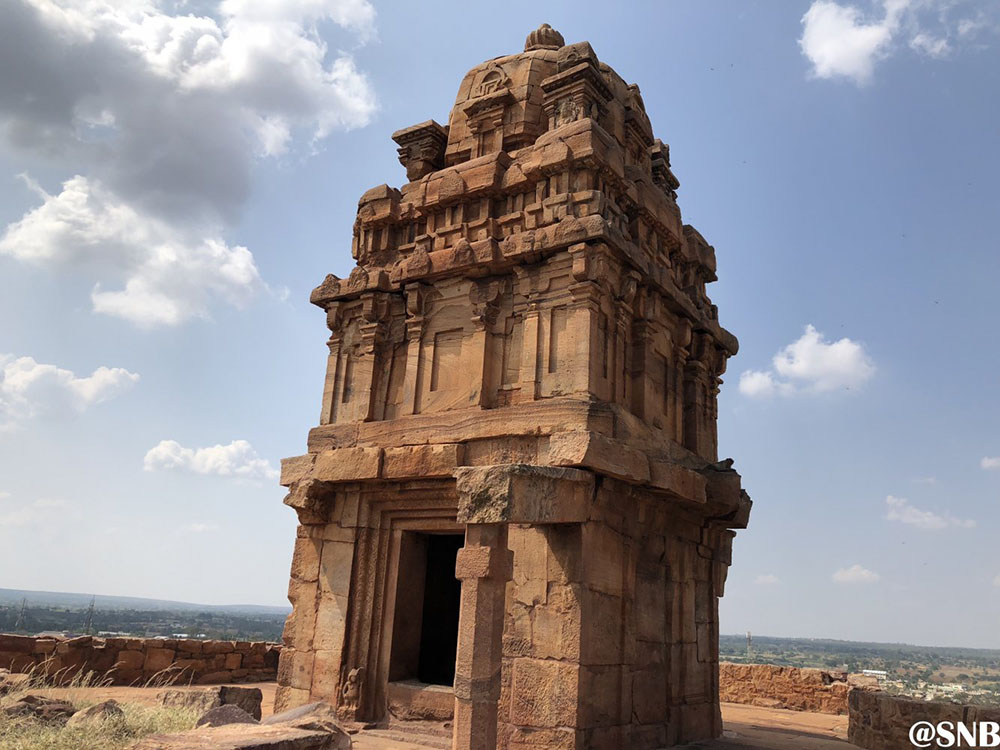 From the lower Shivalaya, the upper Shivalaya is visible at a height. 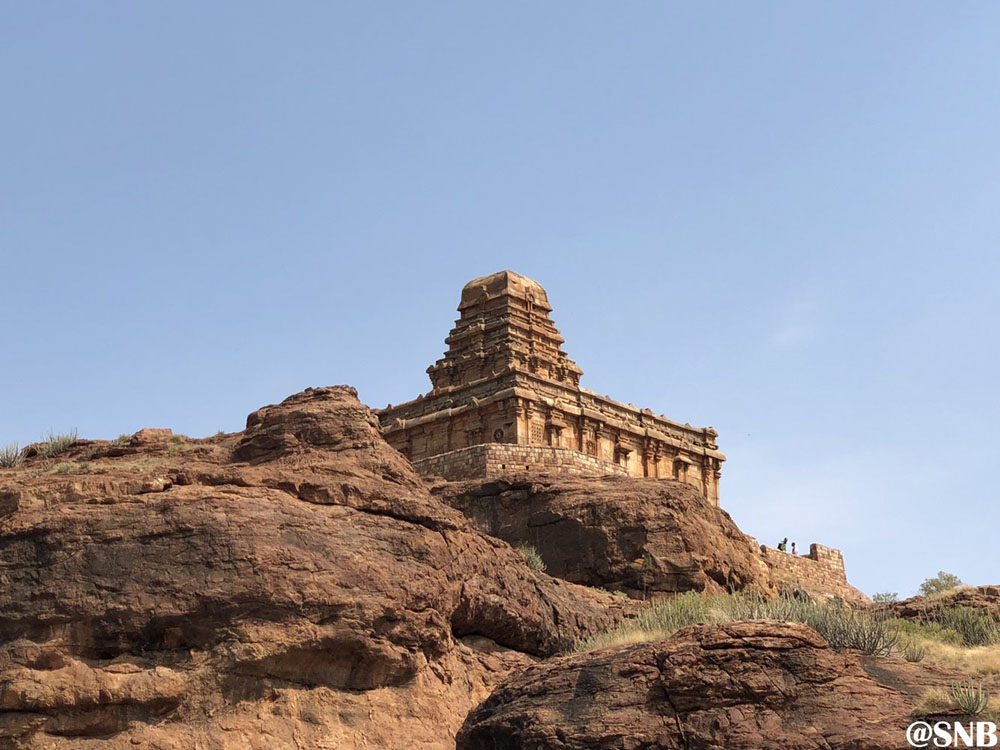 Another old structure is visible at the same height as the lower Shivalaya but it is not accessible. 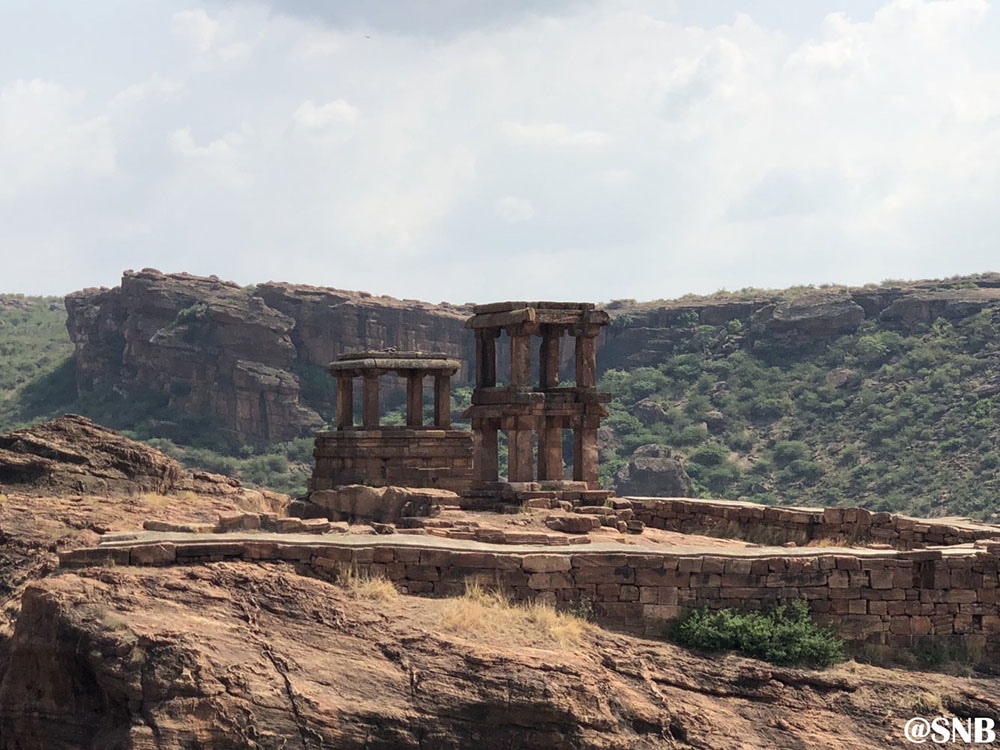 After visiting the lower Shivalaya, we took the other branch towards the fort and upper Shivalaya. After walking a few hundred meters, to the left, there is a cleft that leads to the huge circular bastion which is visible from all over Badami. 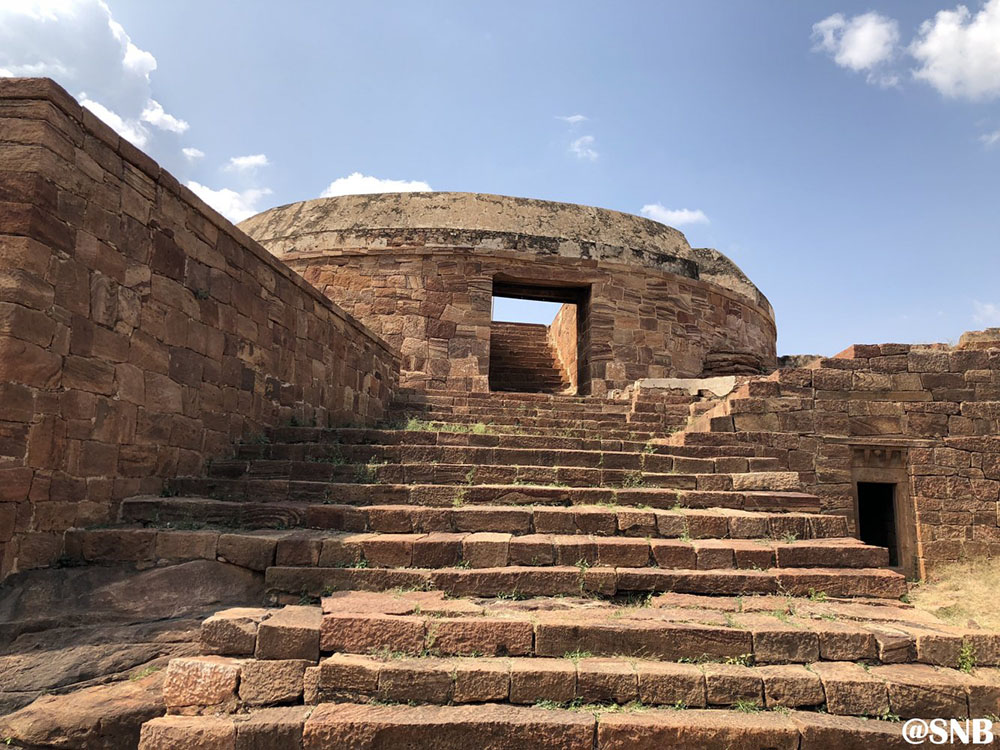 Malegitti Shivalaya is visible from there with Badami town as the backdrop. We came back to the main path and crossed another gate. After this gate, the path becomes really narrow. 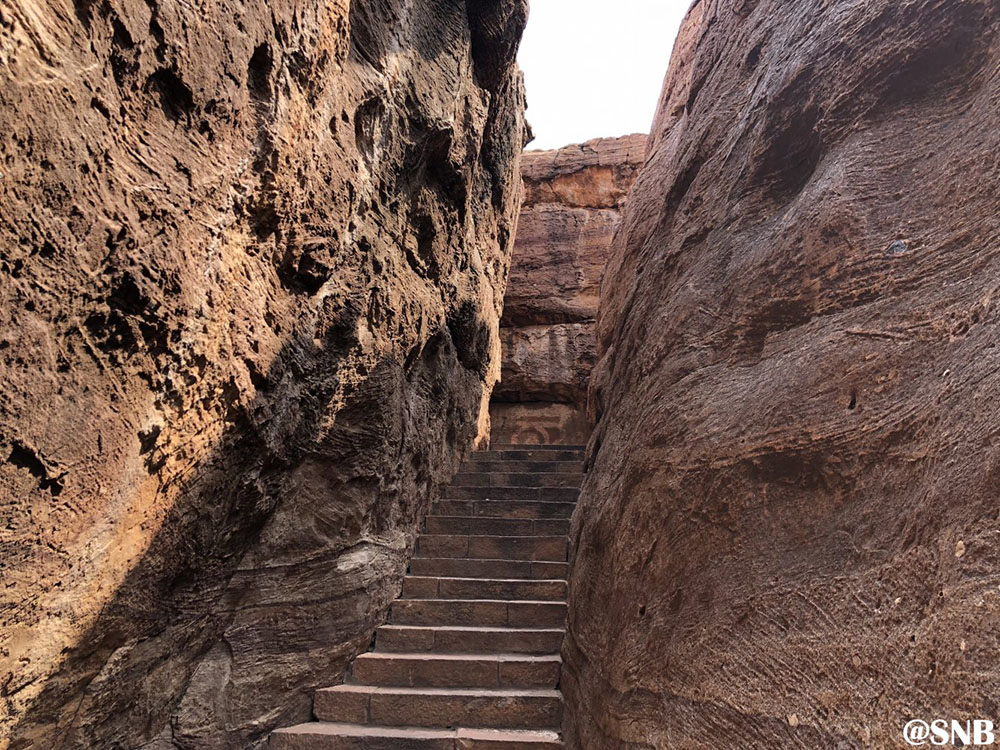 After crossing those narrow pathways, we finally reached the flat hilltop. 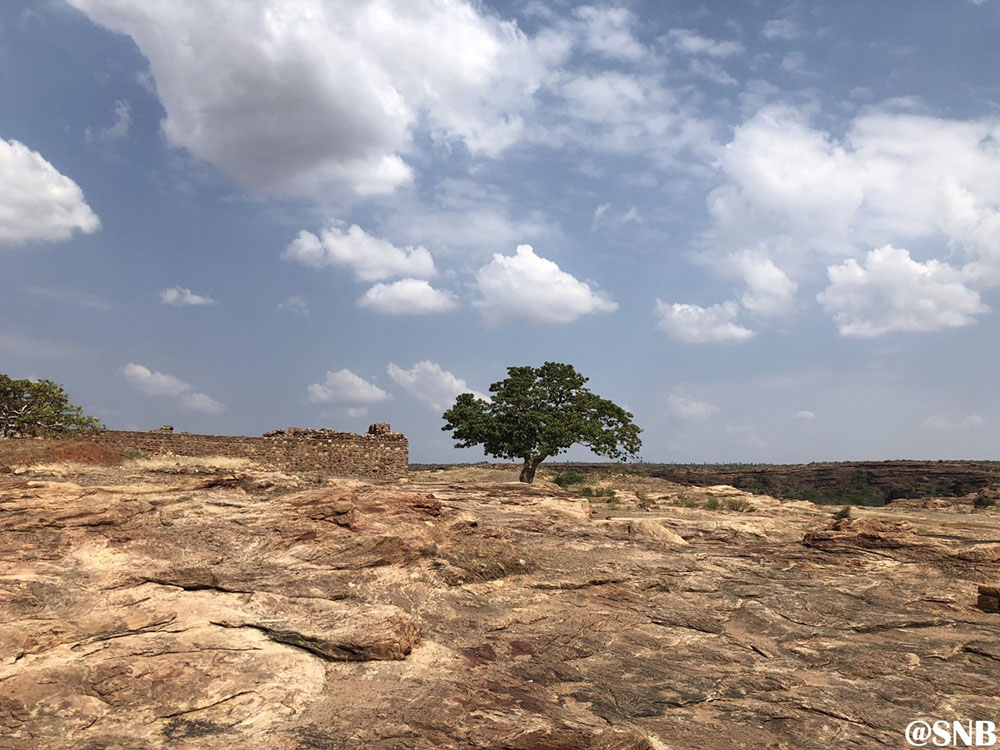 The original image of upper Shivalaya is lost. As Vaishnava themes are carved on its outer wall, it is a Vaishnava temple. There are images of Narsimha killing demon Hiranyakashyapu on the northern wall, Govardhan Giri-Dhari on the Southern wall, and Kaliyadamana on the western wall.

On the top, we saw some 18th CE rectangular underground chambers which are known as Tipu’s treasury.

There are two conical structures made of rubbles, which could be granaries. 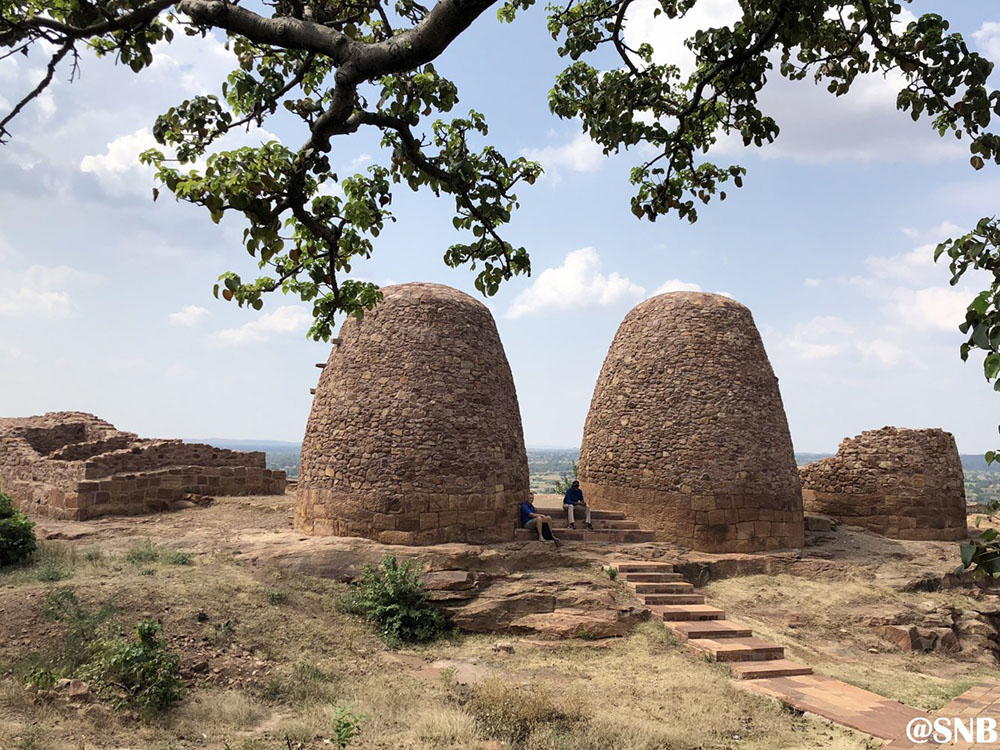 Lower Shivalaya, with Badami town as the backdrop, and Agastya Lake are visible from the top. 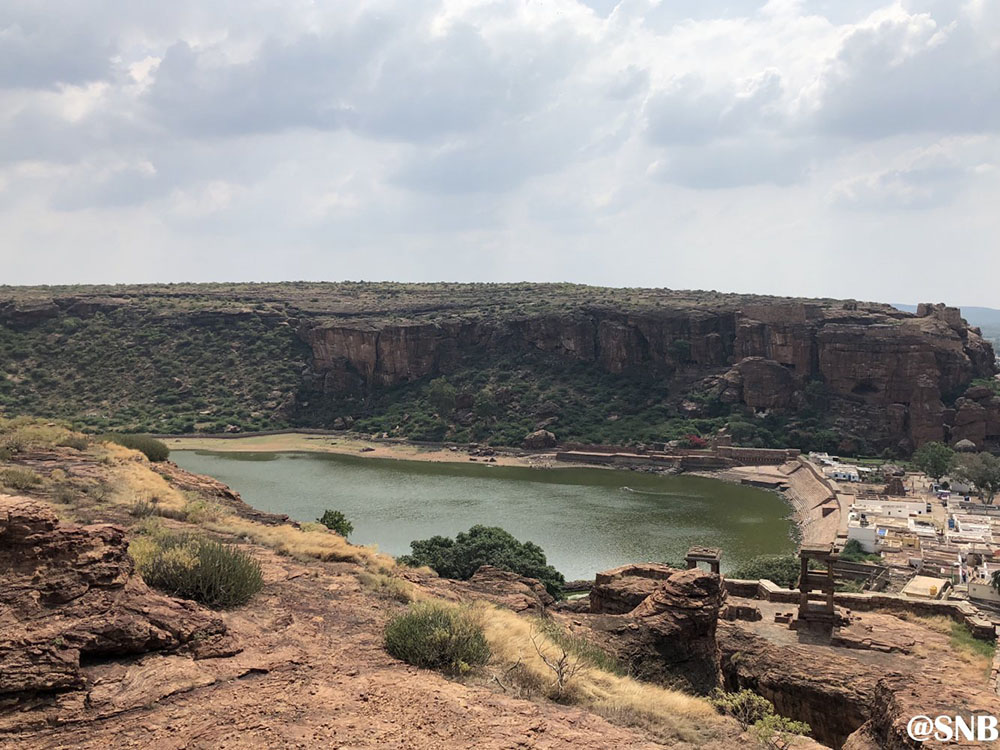 After spending some time there, we started coming down.

Badami, also known as Vatapi, was the capital of Chalukyas (6th – 8th AD) which extended at the time of Pulikesin II from Kanchi in Tamilnad to the banks of Narmada and from Odissa to the West coast.

After a setback for a while owing to the attacks from Pallavas under Narshimha Varman I, the Chalukyas regained their territory gave impetus to the revival of Hindu religion and art.

At this time, because of the scenic beauty and natural defiance provided by the majestically standing rock surrounding Agastya lake, they shifted their capital from Aihole to Badami and built a fort on the flat top of the northern rock which used to be the residence of the Chalukyan kings.

Today, other than those three gates, parts of the temples, remnants of broken fort walls, nothing exist. The grandeur of the past has succumbed to the fury of time.

After coming down from the northern rock, we started walking towards the east for the Bhutanatha group of temples, the next place on our list of sightseeing in Badami. On the way, we crossed Mallikarjuna temple. It belongs to a later period and it was built during the reign of the Western Chalukyas.

This group of temples came under the influence of Jains for a period of time. Later, it was taken over by the Lingayats who installed a Shiva Linga in the shrine and a Nandi in front. 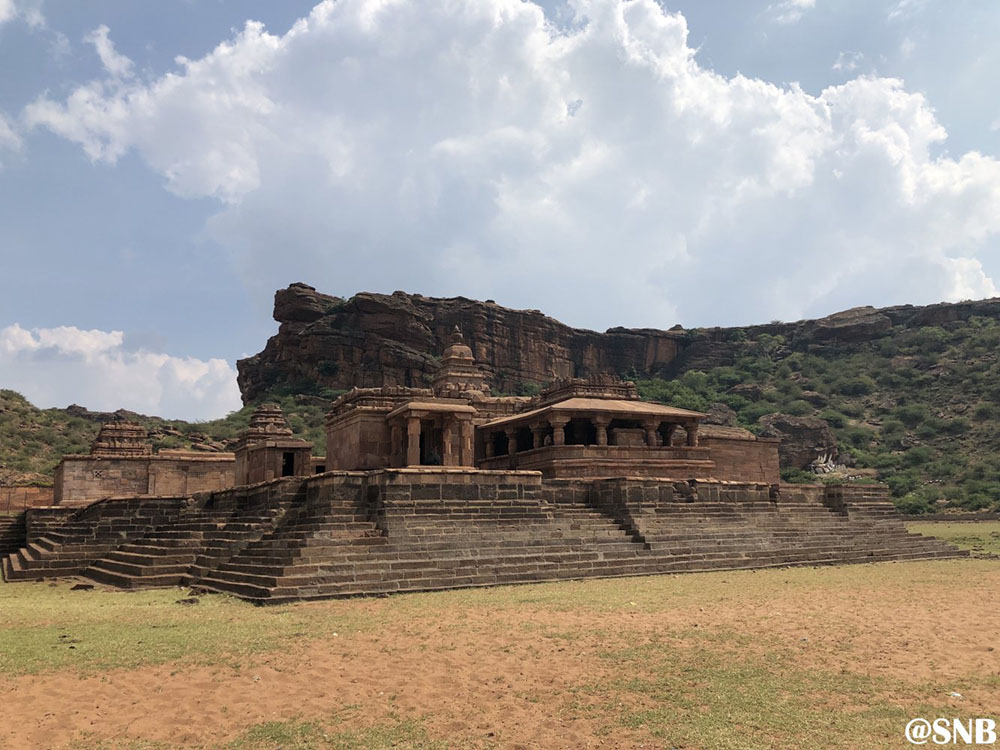 After watching the Bhutanatha group of temples, we headed towards the parking lot along the southern bank of the lake. It was quarter to 1 pm then and was the time to go back to the hotel for lunch.

After lunch, we started for Aihole and reached there at around 3.45 pm. Please click on the link above to continue reading the next part of this travelogue.

I hope the travelogue, pictures, and information on sightseeing in Badami were of help. If you have any questions, please feel free to ask in the comments section below or at our Community Forum, and I will be happy to answer. You can also follow me on Instagram and chat with me live there or subscribe to my YouTube channel and ask a question there.