This article is in continuation to a previous one and a part of my complete Hampi Badami Aihole Pattadakal Itinerary and trip log. After spending 4 days in Hampi, Badami, and Aihole, our fifth day was spent visiting tourist places in Pattadakal and Almatti Dam, details of which I have covered in this post.

We started from Badami at 8.15 am and reached Pattadakal at 8.40 am. The distance was around 22 km and the condition of the road was good. The plan for today was to spend some time in Pattadakal and then continue to Almatti Dam from there.

Places to Visit in Pattadakal

Pattadakal (Pattada-Kisuvolal of the inscriptions), on the bank of the Malaprabha River, is the place where the early Chalukyan Kings used to be crowned. Along with Badami and Aihole, it was one of the great centers of temple architecture experimentation.

Following our Hampi Badami Aihole Pattadakal itinerary, we first went to the Kadasiddeshwara temple which is at the northeast corner of the complex. It is a small east-facing 8th century Shiva temple constructed in Nagara style.

It comprises a square sanctuary with linga and a hall without pillars. The doorframe of the sanctuary is adorned with an image of Shiva-Parvati flanked by Bramha and Vishnu.

The temple’s outer walls are raised on a basement which has an octagonal course, rounded beneath the wall niches on the three sides of the sanctuary. In the sanctuary’s walls, niches are images of Lakulisa (south), Harihara (west), and Ardhanasrisvar (north). They have Nagara pediments.

The faces of the curvilinear tower have courses of cornices raised diminutively. Each layer is carved with a Gavaksha (horseshoe-shaped blind window), flanked by split Gavaksha. At the corners of the tower, are square cushion-shaped Amalakas at regular intervals, three at each corner. 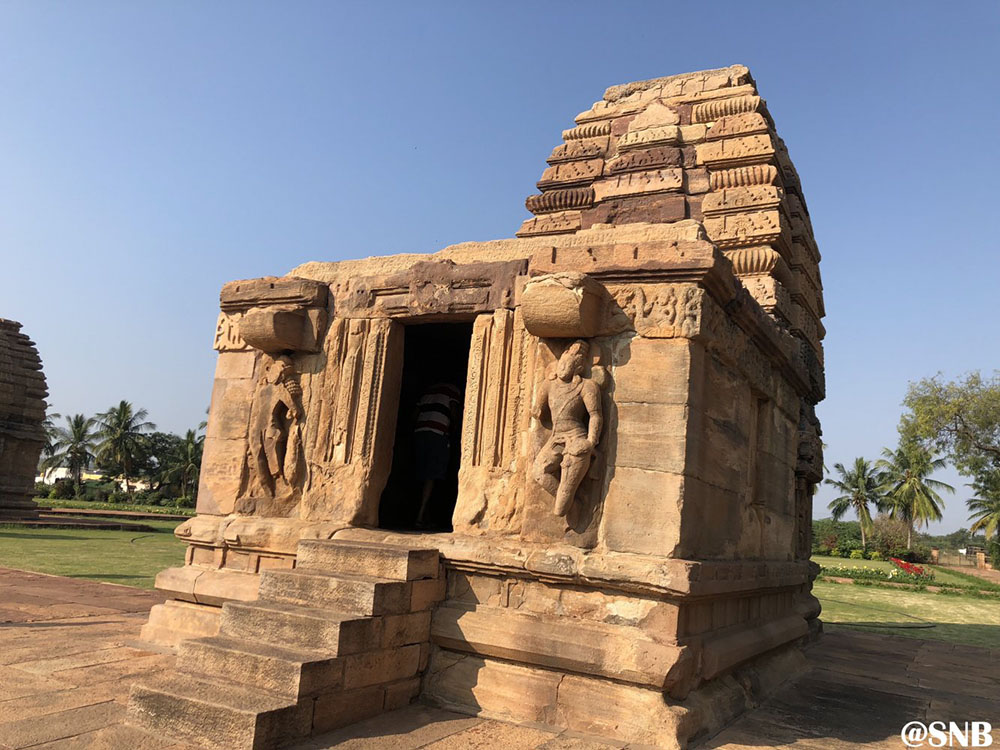 Then we went to the Galaganatha temple. This is also an east-facing early 8th century Shiva temple. It is built on a plinth in the typical Nagara or North Indian style. Partially dilapidated, it comprises a sanctuary with a vestibule surrounded by an ambulatory having windowed porches on three sides.

The adjoining hall in front is lost. The sanctuary’s exterior, seen in ambulatory, consists of a pedestal having a central projection on each side with Nagara moldings and corresponding empty wall niches. Each wall niche is flanked on either side carrying Nagara pediments. A sloping roof covers the ambulatory.

The sanctuary’s doorjambs accommodate the figures of river goddesses Ganga and Yamuna. On the lintel is Nataraja. Over the architrave, a partially preserved Sukhansa projection is seen. The only surviving windowed porch on the south side shelters a beautifully sculpted panel showing Shiva piercing Andhaka demon.

The bottom and top of the pillar shafts of the porch have ghata-pallava (vase and foliage). The sanctuary’s curvilinear tower has sharp-cut features. On its each face are centrally rising layers of gavakshas accommodating human faces, flanked by half gavakshas.

The corners of the tower have square cushion-shaped amalakas at regular intervals. The tower is capped by a large amalaka (a ribbed circular cushion) with a surmounting kalasha (pot-finial). 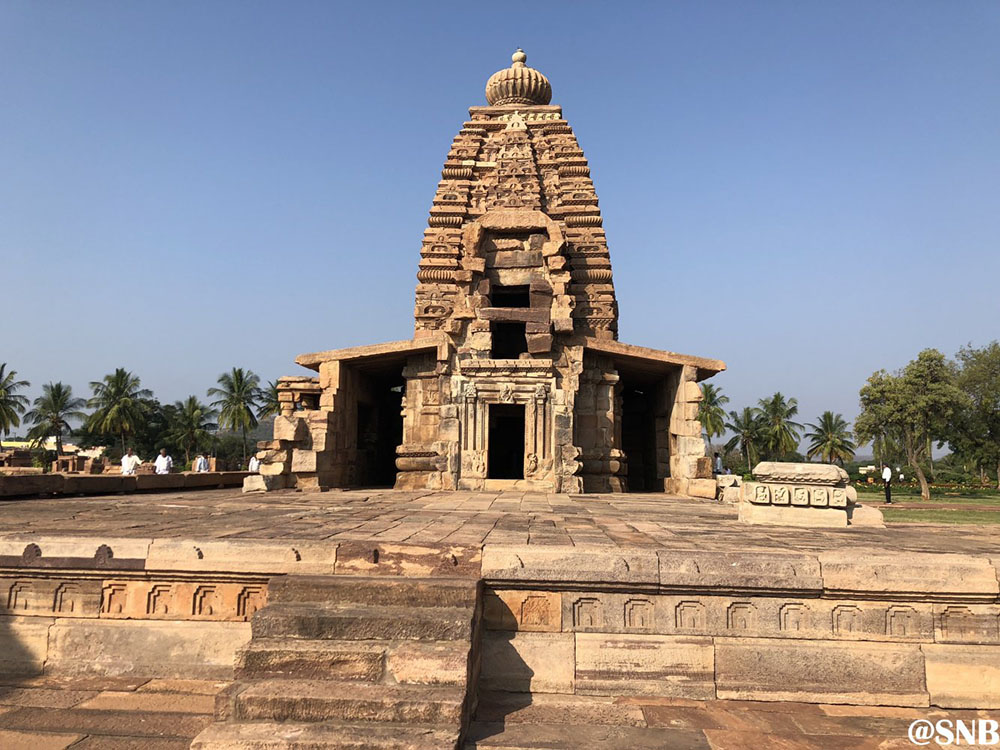 Adjacent to the Galagantha temple is the Jambulinga temple. It is a small east-facing 8th-century Nagara-style Shiva temple with a curvilinear superstructure. It comprises a square sanctuary, a pillarless square hall, and a separate Nandi platform in front.

Its basement has a course of triple-band molding while the wall has thin plasters reliefs. On the cornice, runs a course of vyalamala. Each face of the curvilinear tower has a central course of cornices raised diminutively. Each layer is curved with a central gavaksha flanked by split gavakshas.

At the corners of the tower are a square cushion-shaped Karna-amalakas at regular intervals, three at each corner. The upper components of the tower are missing. On the east face of the tower, leans a large slab with the figure of Nataraja within a large gavaksha. The wall niches have images of axe bearing Lakulisha (south), Harihara (west), and Vishnu (north). 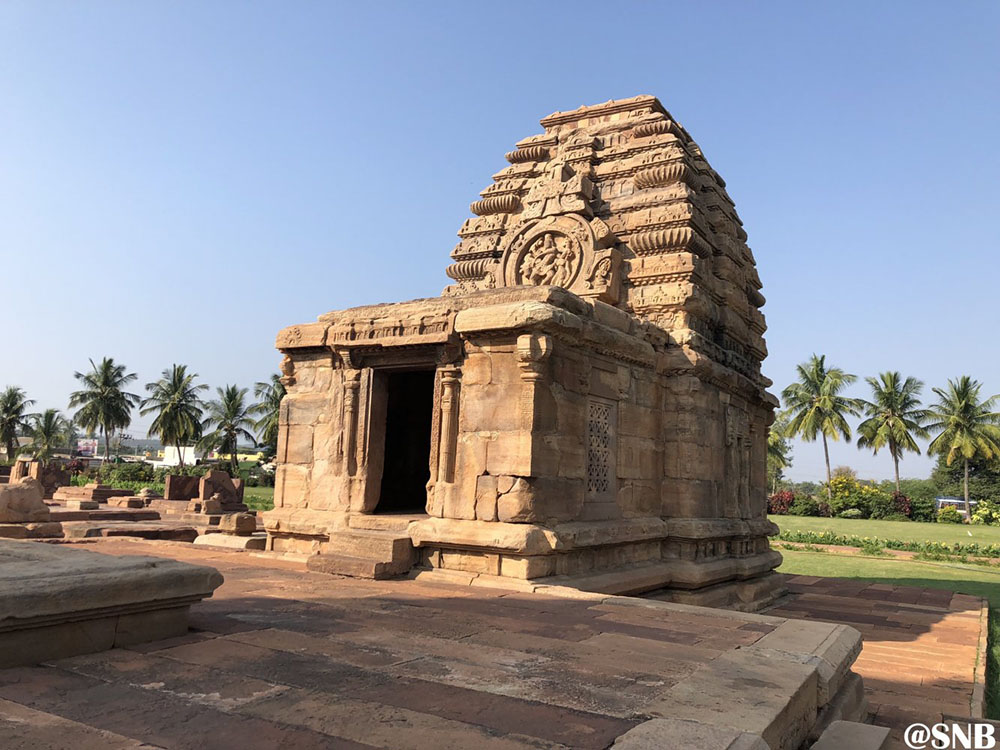 Chandrasekhara temple was built around CE 750. On plan, it has a small and receding garbhagriha and a closed mandapa. A linga on a pedestal is housed in the garbhagriha. The exterior walls of the temple are decorated with pilasters at regular intervals.

Sangamesvara temple is an east-facing Shiva temple in Dravida style dating from the early part of the 8th century. Its deity in linga was named Vijayswara after the Chalukya king Vijayditya (686-733 CE). It was possibly the earliest stone temple erected by Chalukyas at Pattadakal.

The temple comprises a pillared hall and a sanctuary with an ambulatory around. There are two sub-sanctuaries flanking the ambulatory meant to enshrine Ganesha (south) and Mahishamardini (north). The hall was probably entered from three sides.

The basement moldings, walls with pilasters, the hara (parapet), and the tower, etc. are strictly in accordance with Dravida tradition. The sculptures in the wall niches are unfinished in many cases suggesting that probably the temple was consecrated hurriedly even before the hall was completed.

Some of the pillars of the hall were contributed by temple dancers like Chalabbe and other individuals. The inscribed stone in the hall dates from 1163CE and refers to the Kalyani Chalukkya king Taila III and his subordinate Chavundaraya. 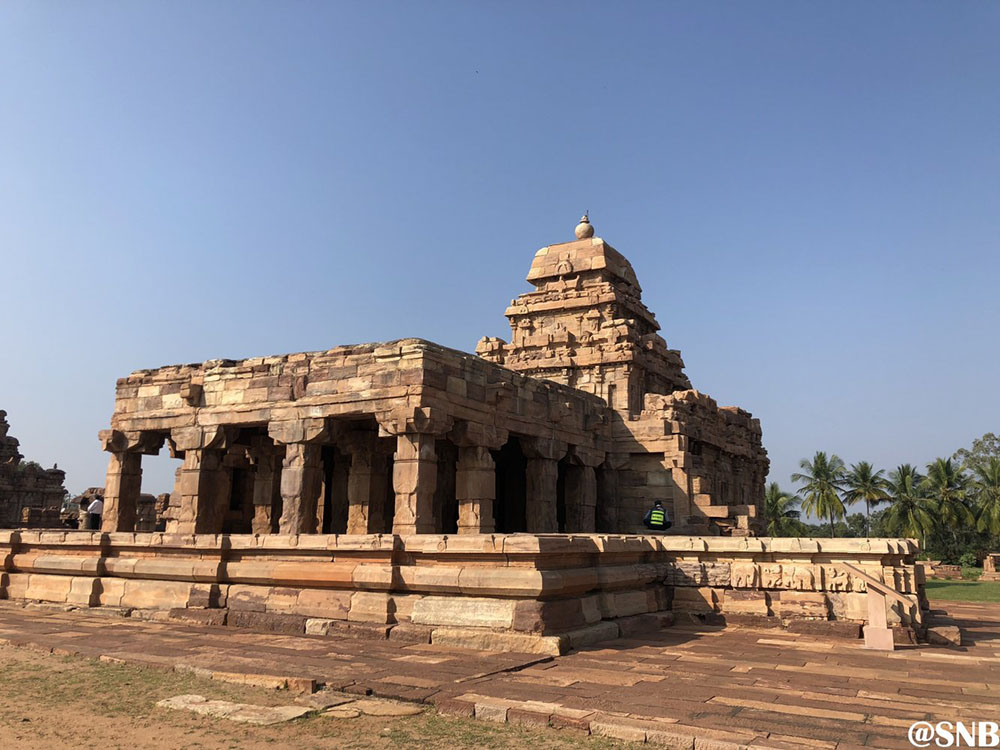 Virupaksha temple is a Shiva temple. It is at the southeast corner of the temple complex. This temple, originally called Lokeshvara temple, was named after Lokamahadevi, the senior queen of Chalukya Vikramaditya II (733-44 CE) who built this temple to commemorate her husband’s three conquests of Pallava capital of Kanchipuram.

The temple is situated within a large prakara (compound) along the inner face of which are several smaller shrines for Shiva-Parivara. The prakara has two gateways, larger on the east and smaller on the west.

The main temple on the east-west axis consists of a porch, a large pillared hall entered also from a porch on south and north and a sanctuary inside entered through a narrow vestibule with an ambulatory around. Two sub-shrines that flank the ambulatory are for Ganesha (south) and Mahishmardini (north).

The sukhnasa, a protruding component over the vestibule henceforth became a common feature of the Dravidian temples in Karnataka. The temple is lavishly sculptured both inside and outside.

This ambitious project was executed by two master architects Gunda-Anvaritachari and Sarvasiddhi-Achari on both of whom the king conferred the state honor. The Virupaksha temple represents the culmination of the early Chalukyan Dravidian-style temple. 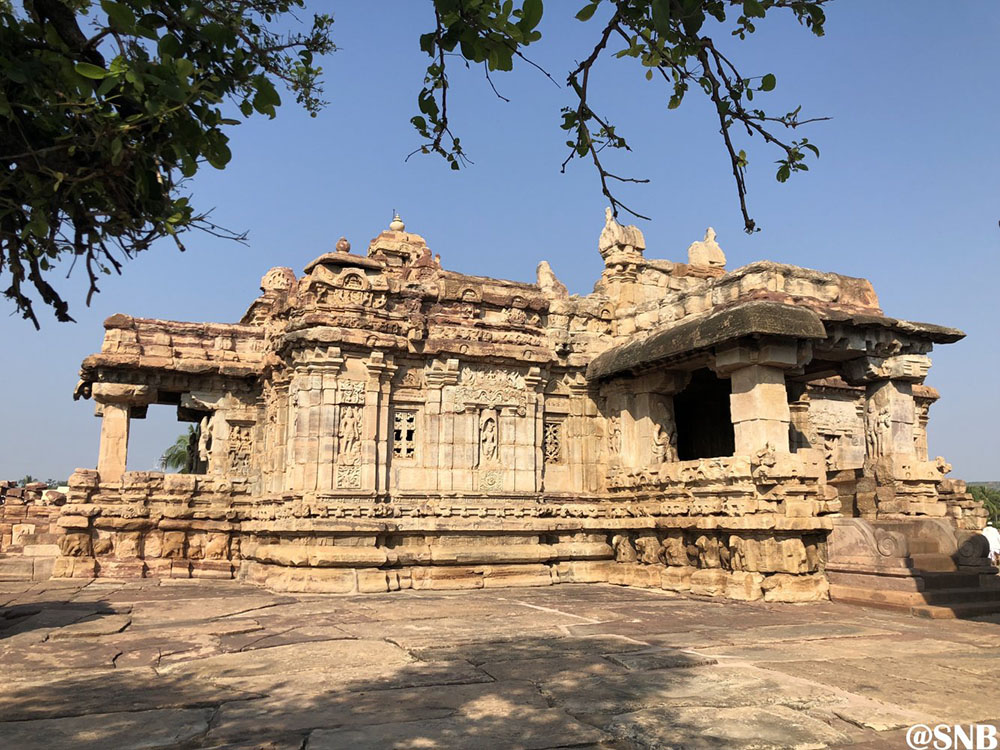 Virupaksha temple, the only practicing temple of the entire temple complex. It has access from the Mahaprabha riverside so that devotees can come to the temple after having a bath at the river and then come to the temple. The Nandi Mandapa stands there.

Mallikarjuna temple is a Dravidian-style Shiva temple that was commissioned by Trailokamahadevi, the sister of Lokamahadevi and the younger queen on Vikramaditya II (733-44ce). Its deity was named after her as Trailokyesvara. The temple shares many of its features including the plan with its larger neighbor Virupaksha.

The temple consists of a pillared hall entered from three sides through porches and a sanctuary with an ambulatory around. A major difference in the elevation of the Vimana is that its three-storeyed tower is capped by a circular sikhara (dome) with stupi (pot-finial) over it.

There are several sculptures of Shiva and Vaishnava theme on the exterior of the temple. The hall’s internal pillar faces carry carvings of narrative episodes from Ramayana, Mahabharata, Krishnacharitra, and Panchatantra. 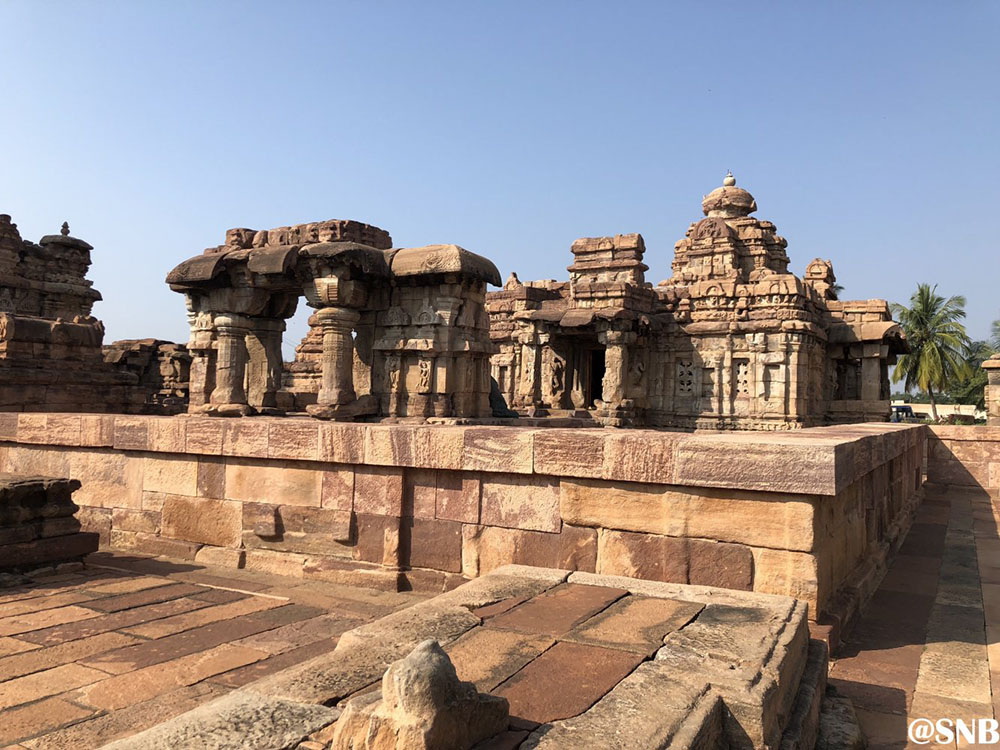 The Kashivishveshvara temple is a compact east-facing Shiva temple in Nagara (North-Indian) style. It consists of a transverse rectangular hall, a small vestibule, and a square sanctuary, the proch being lost. The dates suggested to this temple range from the 8th to the 9th centuries.

The sanctuary consists of a high basement divided into projections with typical Nagara moldings. The wall over it is raised corresponding to these projections and the central and corner projections accommodate niches carrying nagara pediments.

The upper part of the wall carries a band of Kiritmukhas linked to one another by bead-gralnads emerging from their mouths. The faces of the curvilinear tower are decorated with interlaced gavakshas. The crowning members of the tower Amalaka and Kalasha are lots.

A sukhanasa projection with similar gavaksha lace-work accommodates an eight-armed Nataraja in front. The decoration of the walls of the hall is similar to that of the sanctuary.

It is more ornate with well-carved pillars, brackets, beams, and architraves. The concept, design, and execution of this temple show great advancement of the larger Nagara temples of the Chalukyas. 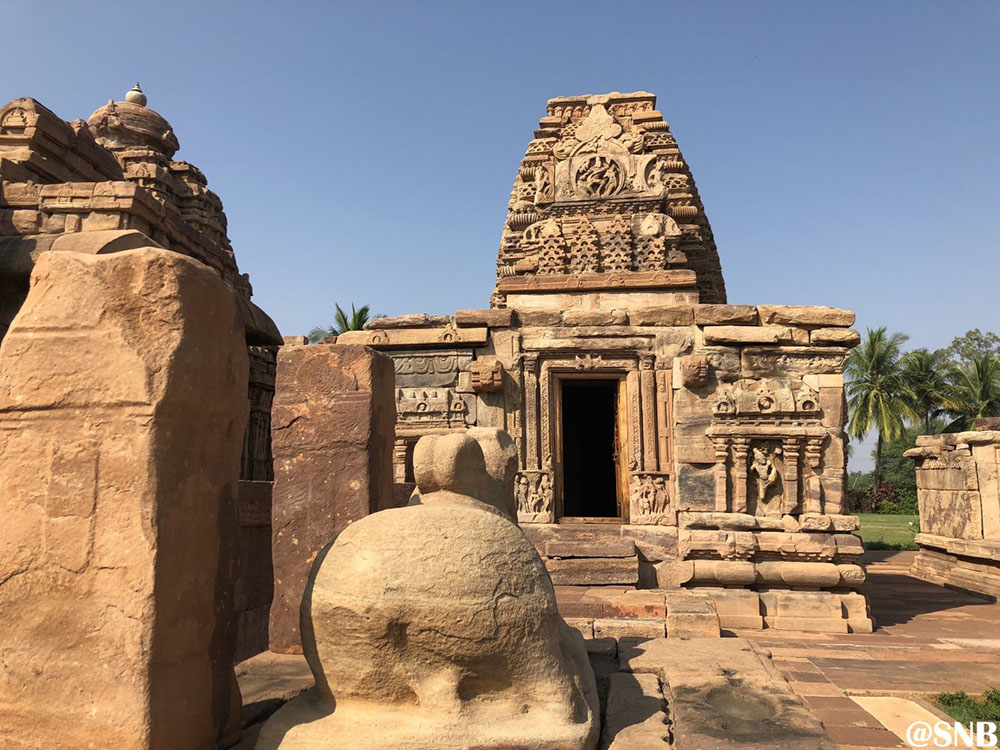 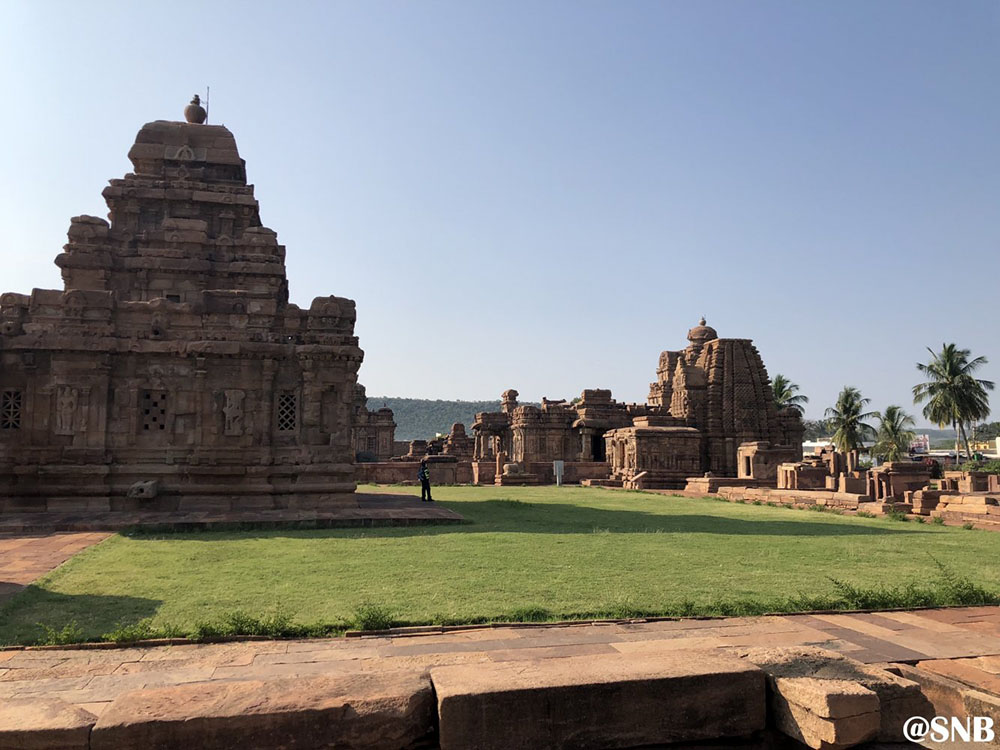 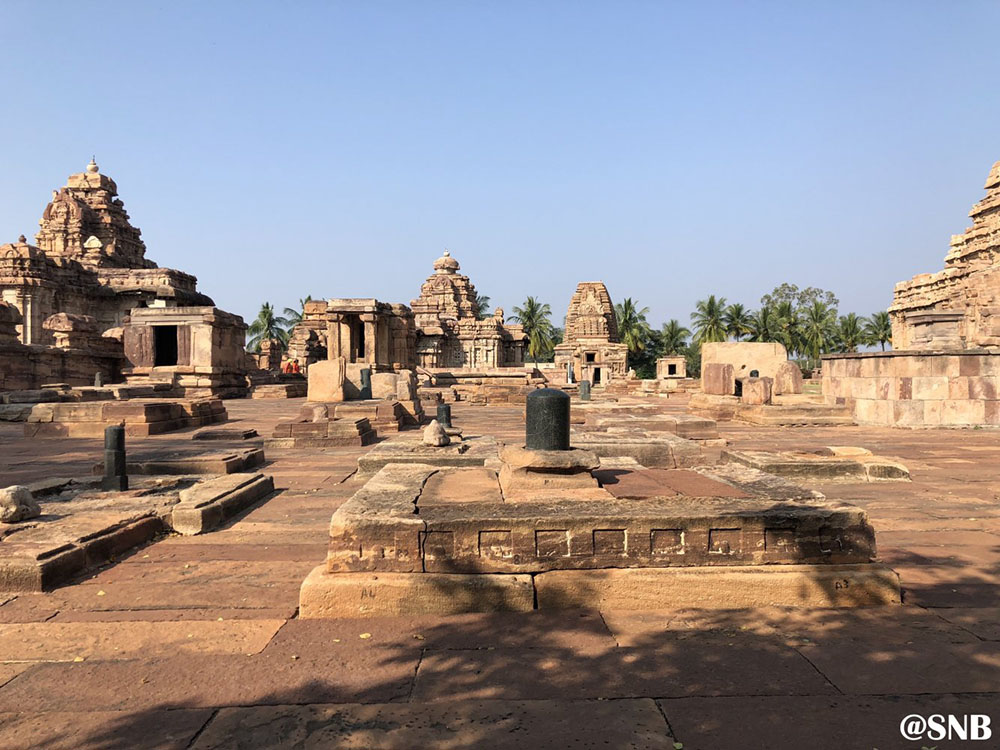 The temple complex has few other temples and shrines. It’s a grand example of the sophistication of temple architecture prevailing at that point in time.

We started for Almati dam at 10.10 am and continued to Vijayapura from there. Please click on the link above to continue reading the next part of this travelogue.

I hope the travelogue, pictures, and information provided so far on Hampi Badami Aihole Pattadakal itinerary were of help. If you have any questions, please feel free to ask in the comments section below or at our Community Forum, and I will be happy to answer. You can also follow me on Instagram and chat with me live there or subscribe to my YouTube channel and ask a question there.