This article is in continuation to a previous one and a part of my complete Hampi travelogue. After spending 2 days in Hampi, we arrived in Badami and then spent a day there visiting the local attractions including Badami cave temples. The post below is a detailed narration of our visit to the cave temples.

At Badami, we stayed at KSTDC Maurya Chalukya. This is a better-maintained property compared to the one we stayed at in Hosapete. Therefore, the room rates are also higher. However, the sizes of the rooms are slightly smaller than that of Hosapete. The property has adequate parking space and an in-house restaurant.

We started around 7.45 am for local sightseeing. The first destination was Badami caves. The idea was to come back to the hotel for breakfast after seeing Badami caves and then spend the rest of the morning and forenoon to see the balance attractions of Badami and going to Aihole and Pattadakal in the afternoon.

All the attractions of Badami are at the east of NH367 and access to those attractions from NH367 is a bit difficult because of the local market and shanties.

From my experience, I think that it would have been better had we hired a local vehicle for local sightseeing at Badami. We would have saved significant time that we lost trying to figure out the right approach road and parking space. There is no visible effort to develop this place as a tourist destination.

We reached the parking lot for the Badami cave temple complex around 8 am. 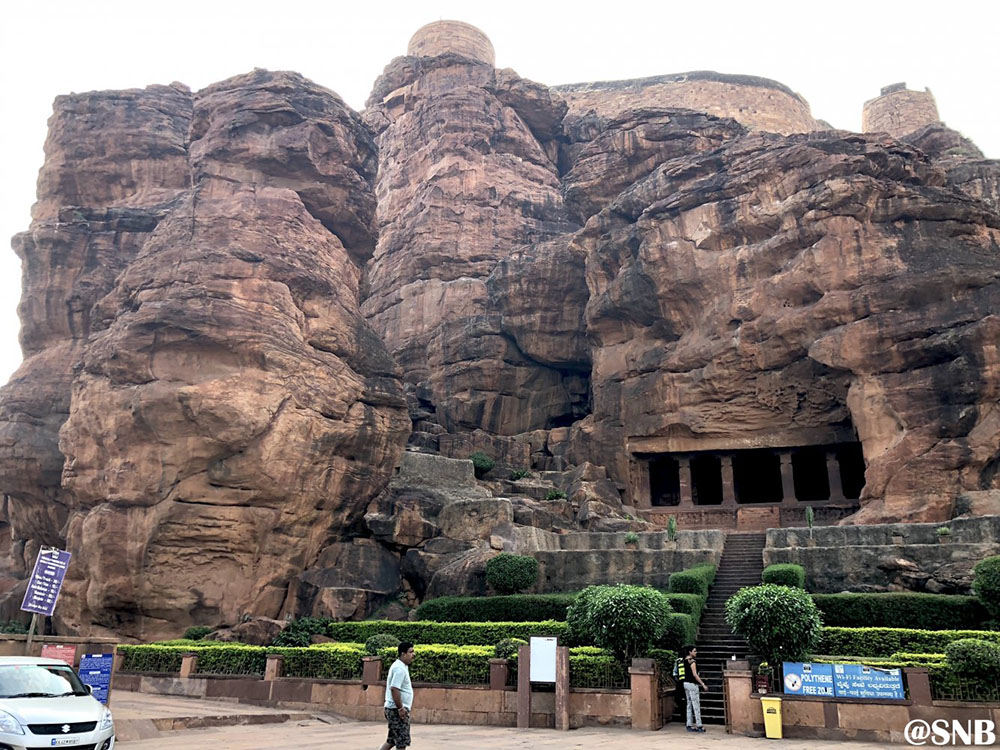 The parking lot is at the southwest corner of Agastya Lake. The cave temples are on the hills on the southern bank of the Agastya lake. The temples have to be accessed by stone steps. There are four cave temples.

The first cave temple was excavated around 550 CE. It is dedicated to Lord Shiva in Linga form. It consists of an open porch, a pillared hall and a sanctuary excavated into its rear wall.

The sidewalls of the porch have large-size relief sculptures of Harihara on the left and Ardhanrishwara on the right, supported on the pedestal that friezes dwarf Ganas in various moods. The ceiling is adorned with deeply cut sculptured of coiled snake-king Nagaraja. On either side of this are flying Vidyadhara couples.

The pillars that divide the porch from the inner hall are fluted with beautiful cushion capitals. Pillars carry low relief sculptures of deities and are decorated with pearl festoons, foliation, medallions with mythical creatures, rows of swans, etc.

Other interesting themes include a two-armed Shaiva-dwarpala on the left flank of the porch entrance, a Vrishava-Kunjara (Bull & Elephant in one), and Shiva-Parvati mounting on Nandi. 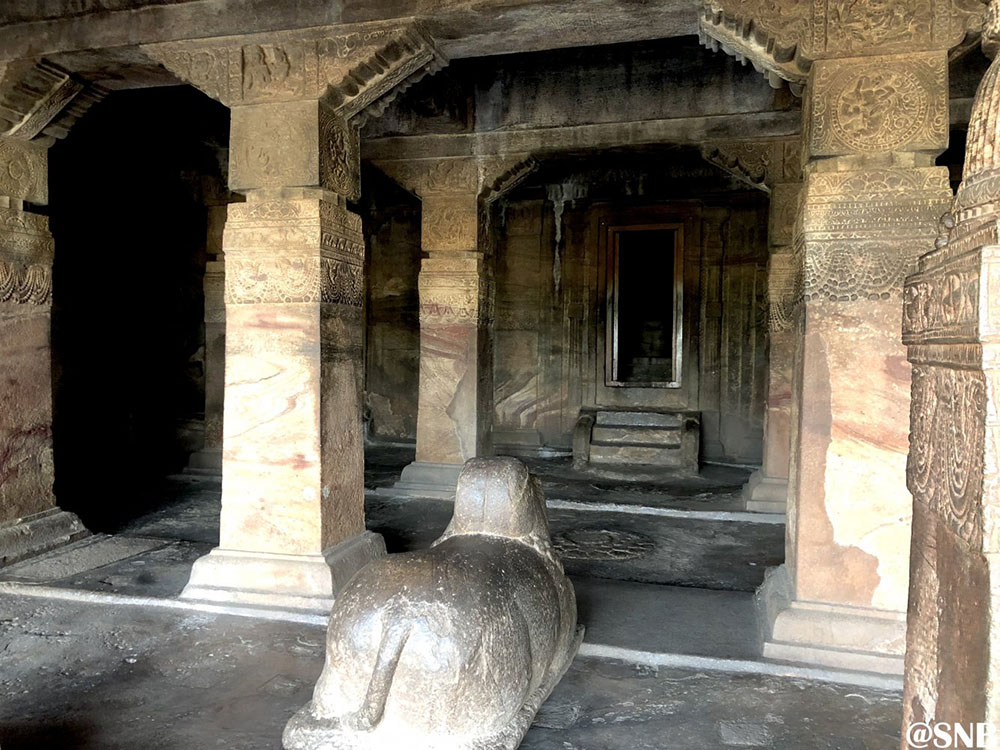 After finishing the visit to the first cave temple, we started walking up towards the 2nd cave temple. 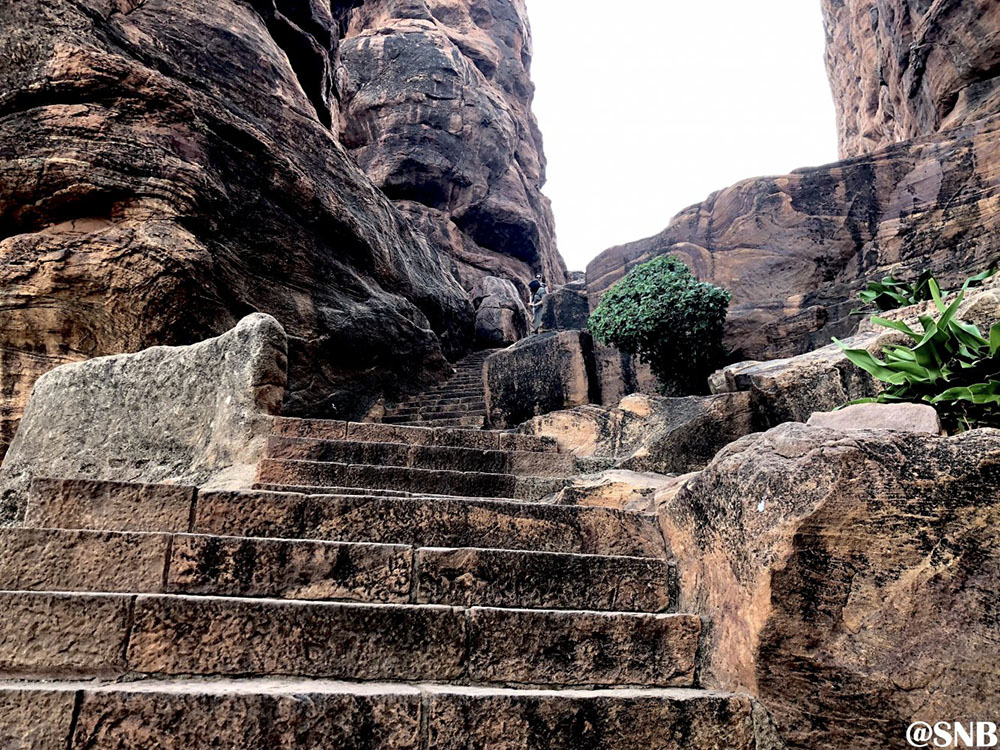 The 2nd cave temple was excavated for Lord Vishnu in the 6th century CE. In Plan, like the 1st cave temple, it comprises an open porch, a pillared hall with a sanctuary cut into its rear wall.

Two-armed, calmly disposed of, meditating door guardians flank the entrance to the porch. Major sculptures in the porch include panels of Vamana-Trivikrama to the right and Vhu-Baraha to the left, with freezes of Gana (Dwarfs) caved on the pedestal. 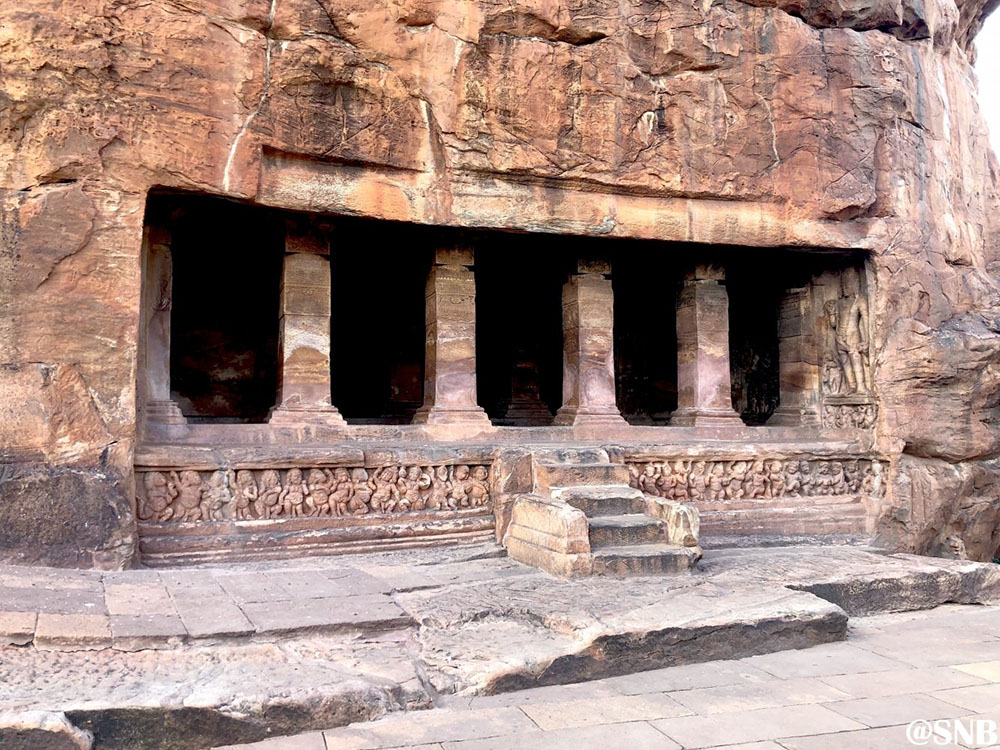 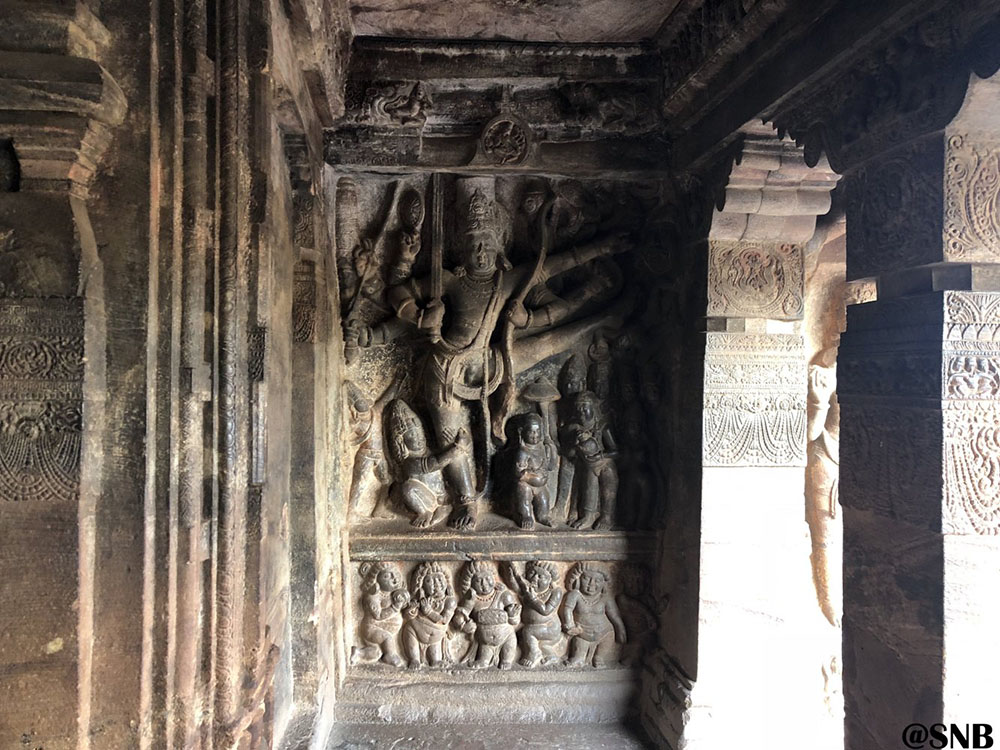 There is a stone bench in front of the 2nd cave temple. We took a rest there for some time and then started ascending for the 3rd cave temple. 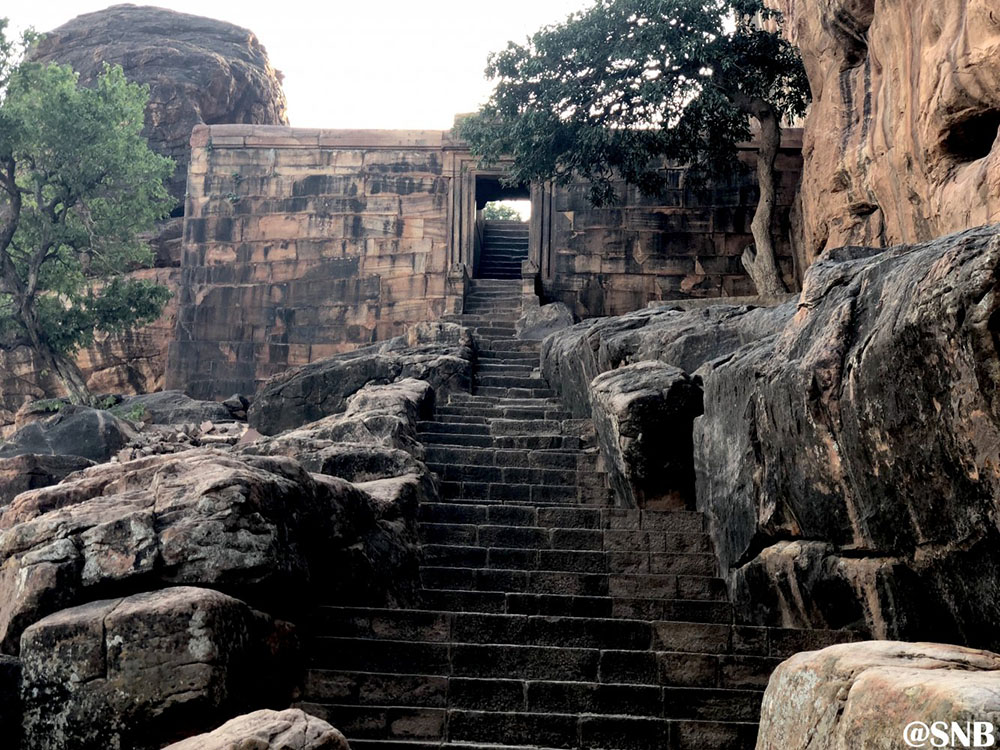 The 3rd cave temple was created in 578 CE by Chalukya Mangalesha in the reign of his stepbrother Kirtivarma I for the god Maha-Vishnu. Like the 1st and 2nd cave temples, the plan comprises an open verandah and a pillared hall with a sanctuary cut in the rear wall.

However, this cave temple was built on an ambitious scale being the largest and most ornate of all Chalukya caves. This cave temple has a stone structural enclosure. A Sanskrit inscription craved beside the great Varaha relief in the verandah details its dedication, date, and gift of village Lanjisvara by Mangalesha.

The temple’s verandah accommodates super-human size figural compositions. Eight-armed Vishnu, Vishnu seated on Ajanta and Bhu-Varaha on the left side and Harihara, majestically standing Narasimha and Vamana-Trivikrama on the right.

Side faces of beams carry narrative freezes of episodes from Mahabharata and Puranas, Samudra-Manthana, Krishan’s exploits, and Parijata-Harana. The image of Maha-Vishnu is missing from the sanctuary. 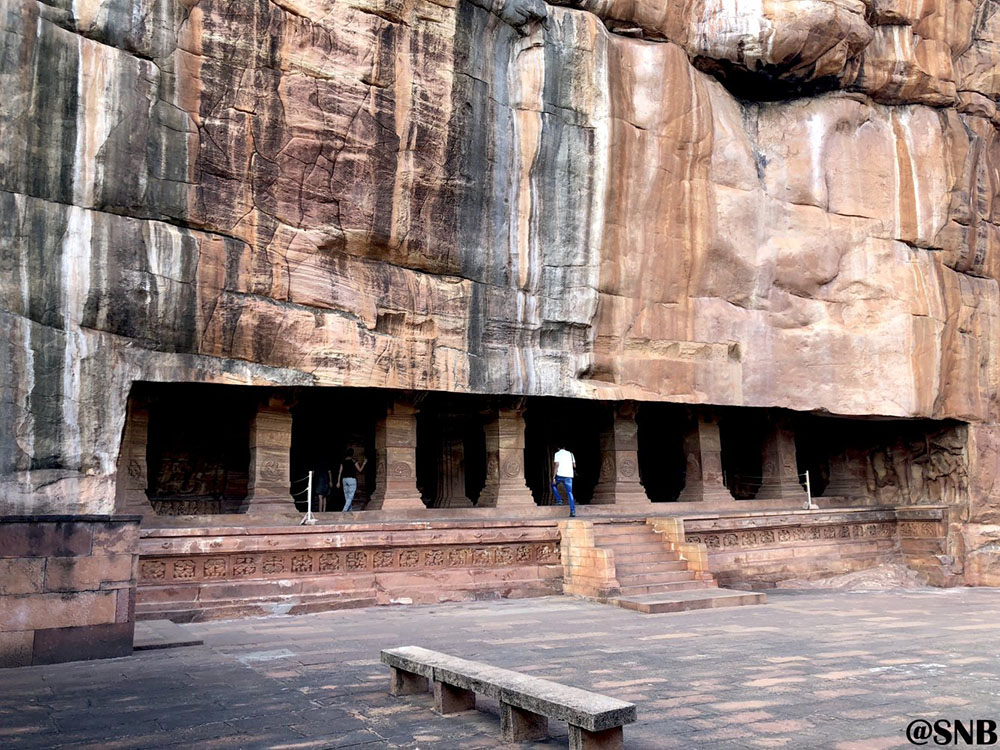 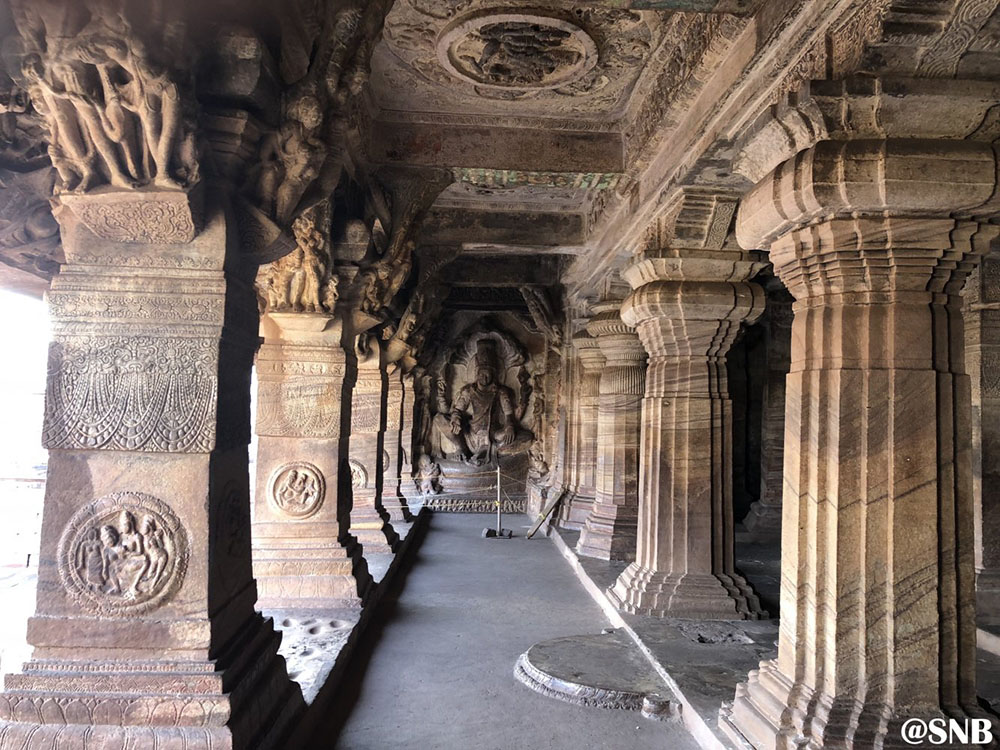 Its verandah walls accommodate relief sculptures of Bahubali in penance and Parsvanatha in penance overcoming obstacles of his demonic enemy Kamatha. The sanctuary door frame depicts the Kama as the door-guardian.

On the rear wall of the sanctuary is the relief sculptures of a sermon-delivering Thirthnkara, probably Mahavira with Halo behind and seated on a Lion throne under a Chaitya-tree and Triple-umbrella and attended by Chauri bearers, Vidhyadhara offering flowers and divine drums beaten by themselves. 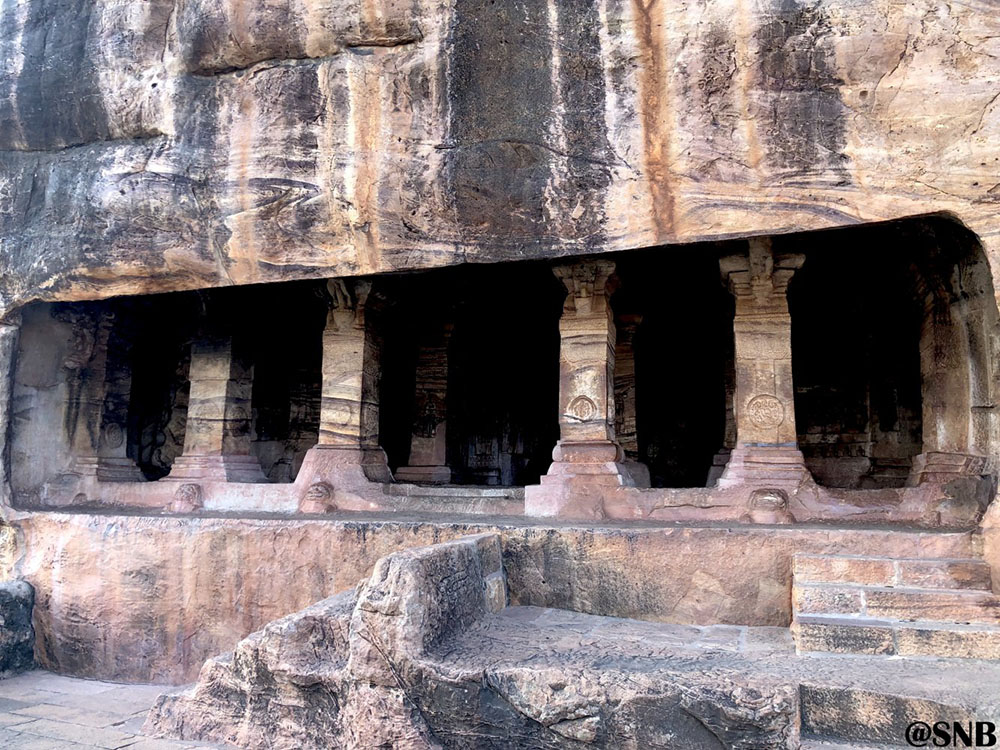 We spent some time there, clicked some photos of Agastya Lake, and started descending around 8.40 am. 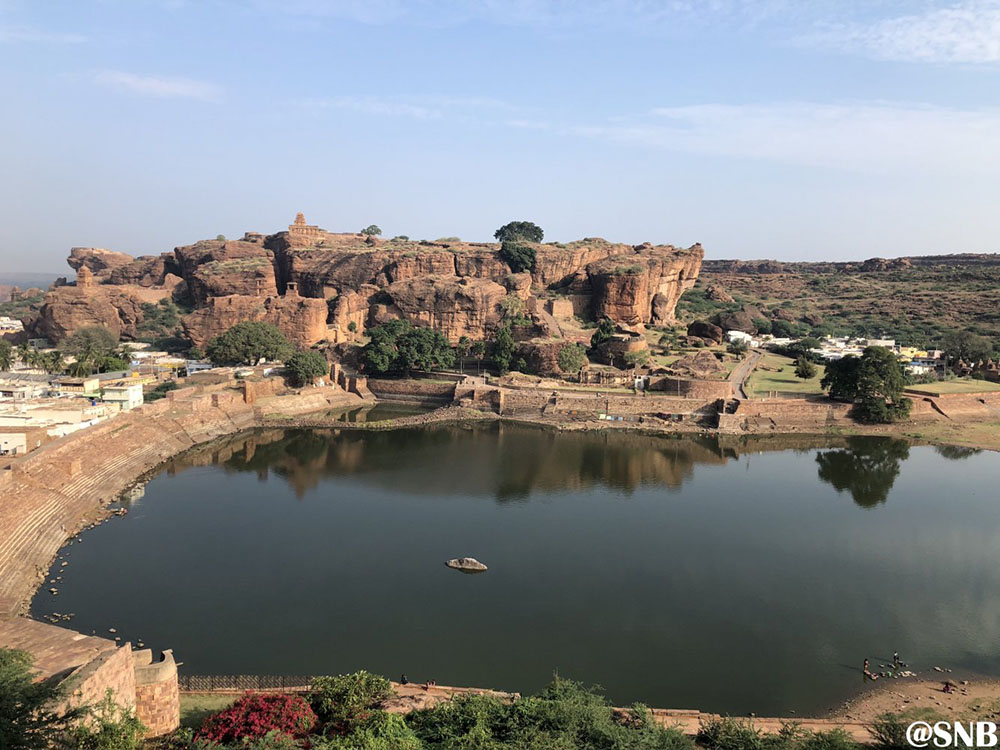 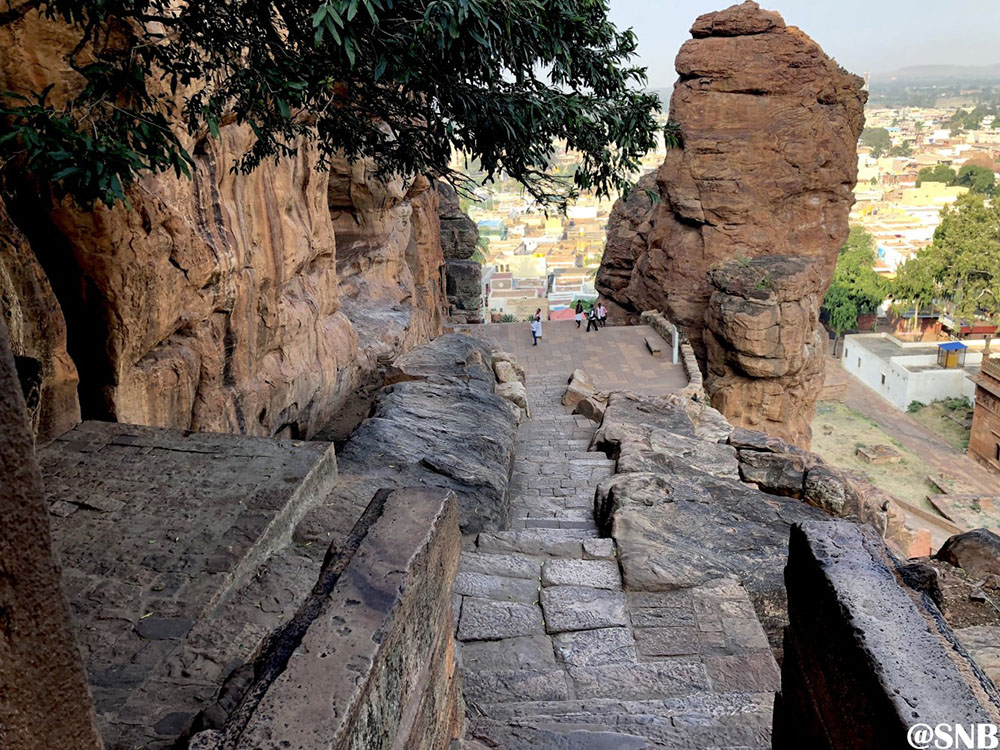 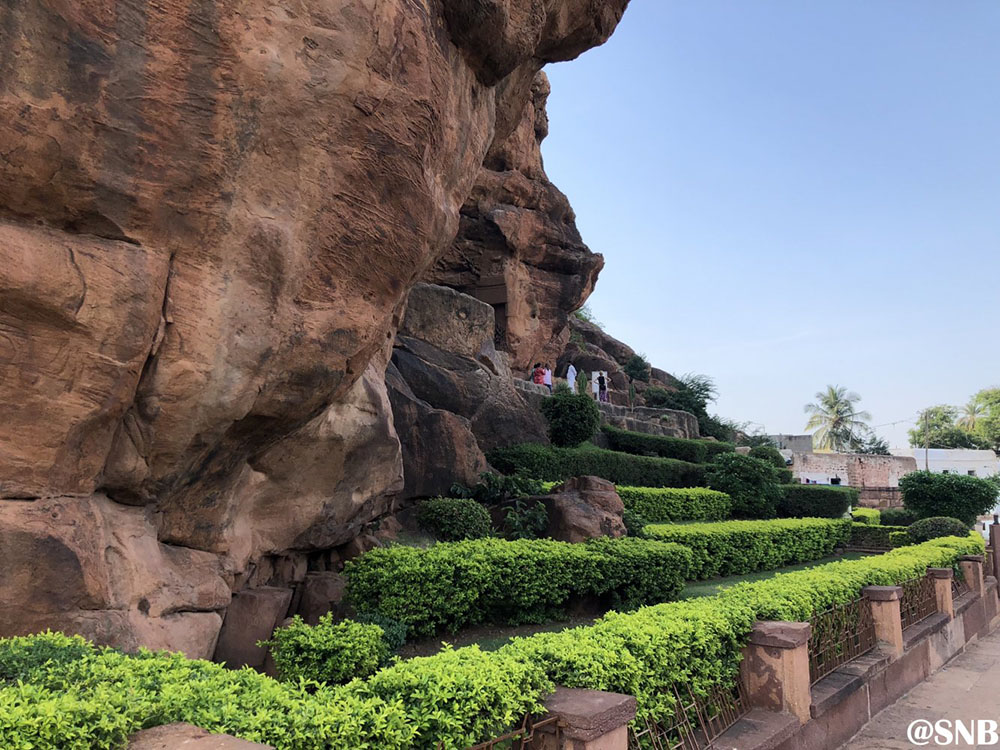 After reaching the parking lot, we took some photographs of an old unnamed temple and mosque, both situated on the western bank of the Agastya Lake, and some random photos of the hill on which the cave temple complexes are and then proceeded back towards our hotel for breakfast.

It was 9.00 by the time we reached our hotel. We started from KSTDC Hotel Maurya Chalukya around 10 am after having breakfast. Our next destination was Malagitti Shivalaya. Please click on the link above to continue reading the next part of this travelogue.

I hope the travelogue, pictures, and information on Badami cave temples were of help. If you have any questions or need any other details, please feel free to ask in the comments section below or at our Community Forum, and I will be happy to answer. You can also follow me on Instagram and chat with me live there or subscribe to my YouTube channel and ask a question there.