This article is in continuation to a previous one and a part of my Mumbai to Tawang trip log. The post below is a detailed narration of our drive from Dirang to Sangti Valley on the seventh day of the trip. Before this, we had already spent a few days in Tawang and covered the nearby tourist destinations. To read about the previous part of the journey, please click on the links below.

I got up around 6 am. Though there were some clouds in the sky, it was a bright sunny morning. So I went out to roam around Dirang Town.

Dirang town is spread over both the banks of the Dirang River. We were staying at the NH side. My primary objective was to go to the other bank of the river. Further, as per our plan, we were supposed to go to Sangti valley at a later part of the day for which the river was to be crossed. So prior information about the route would be helpful for reaching Sangti valley.

From the main junction, I took the downhill road. The town was yet to get up by that time. Not many shops were open. I found a tea stall, which was open, and had a few cups of tea. They also serve Momo, but that would be available after an hour or so.

After a few hundred meters, the road bifurcates. Both branches were pucca roads. On inquiry, locals told that the right branch, after 1-1.5 km would cross the river via a vehicular bridge. The left branch goes to Dirang Stadium which is on the elevated river bed. The river can be crossed in two ways.

The first option is to follow the right branch and cross the river using the vehicular bridge. Another option is to use a footbridge, which can be reached by a narrow lane from the point where the main road bifurcates. I took a right turn.

It took me 15-20 minutes to reach the vehicular bridge. 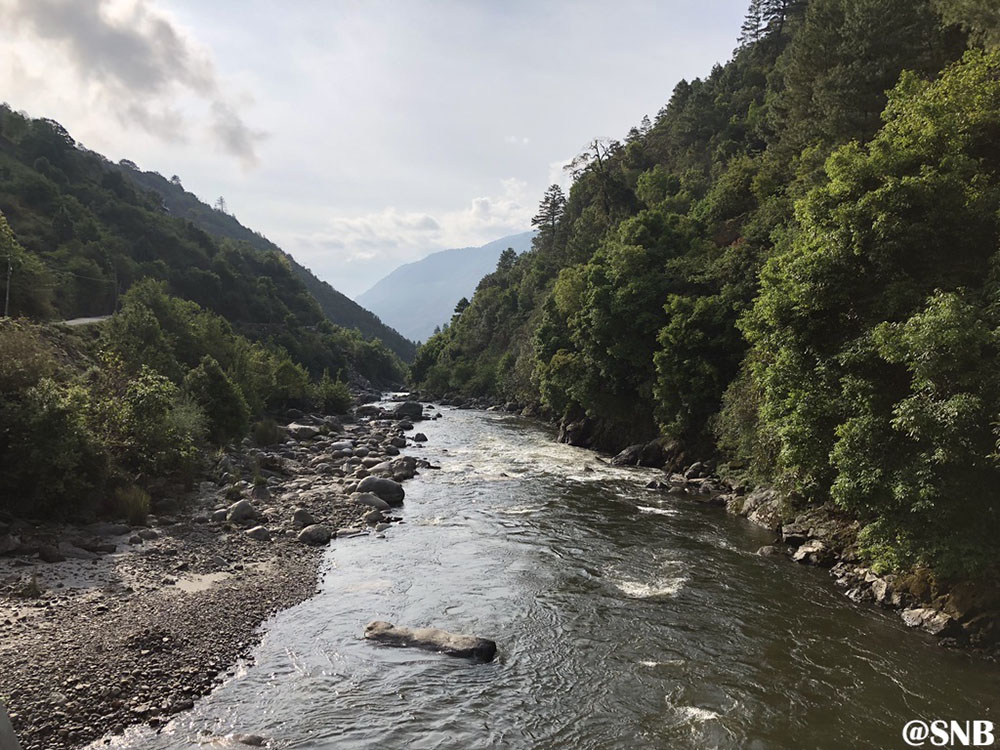 After crossing the Dirang river, again the road bifurcates. The right prong goes to Sangti Valley. The left prong goes to the other side of Dirang town. I took the left turn. The objective was to see the part of the Dirang town of this bank and then return using the footbridge.

A Walk in a Beautiful Town

The priest and his son were there. The Priest was from Uttar Pradesh and had been staying at Dirang for the last 15 years. He managed to secure some land on the elevated river bed for his temple complex and he planned to build a grand temple of Goddess Durga. 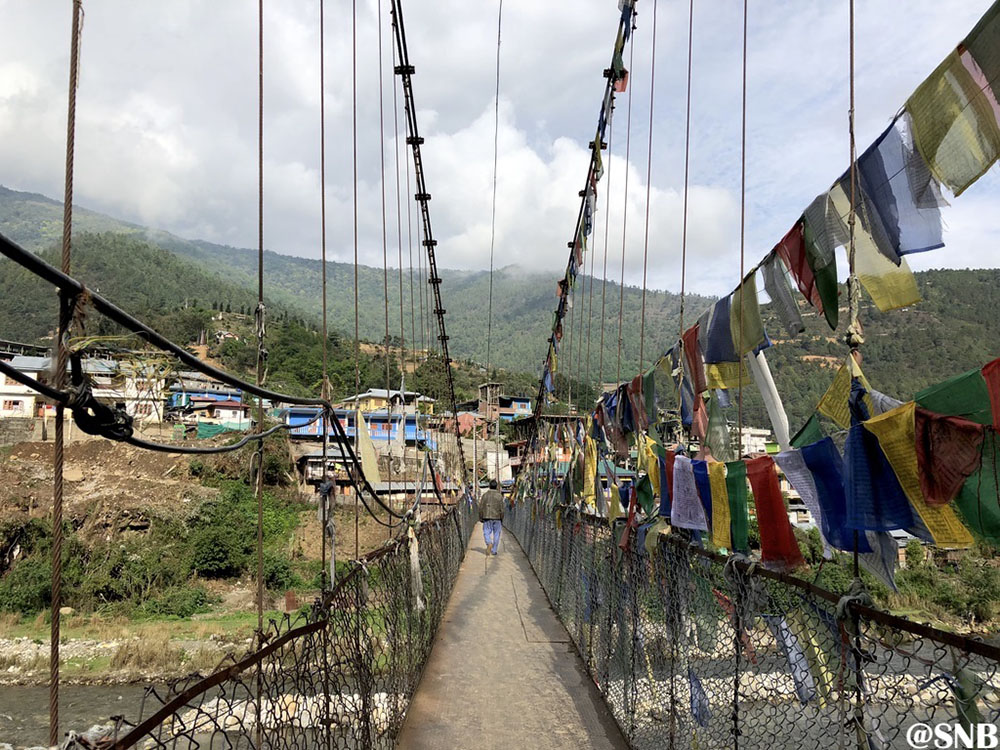 After crossing the river using the footbridge, I reached the point from where I took a turn for the vehicular bridge. Now I took the branch, which goes to Dirang Stadium. Dirang town had woken up by that time. 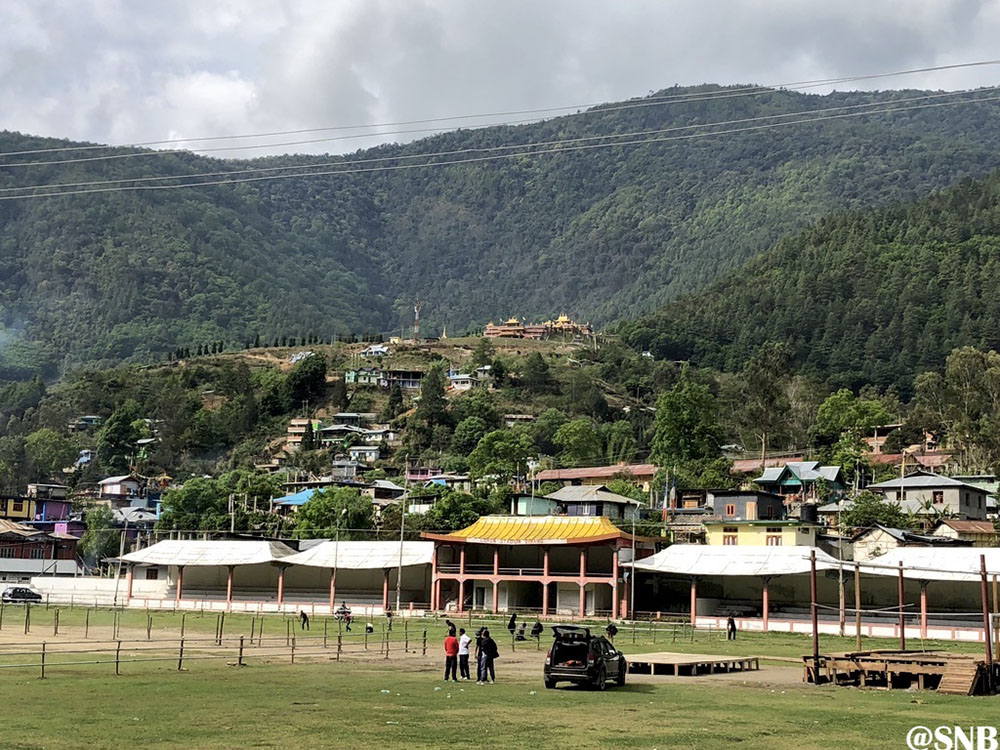 We started for Sangti Valley around 10 am. By that time, it had become cloudy. When we crossed the vehicular bridge and took the right turn, the drizzle started.

From there, we left the Dirang river and started driving upstream of the river coming from Sangti Valley. The river was on our right-hand side. The road is at a height from the riverbed. It is a typical hill road. 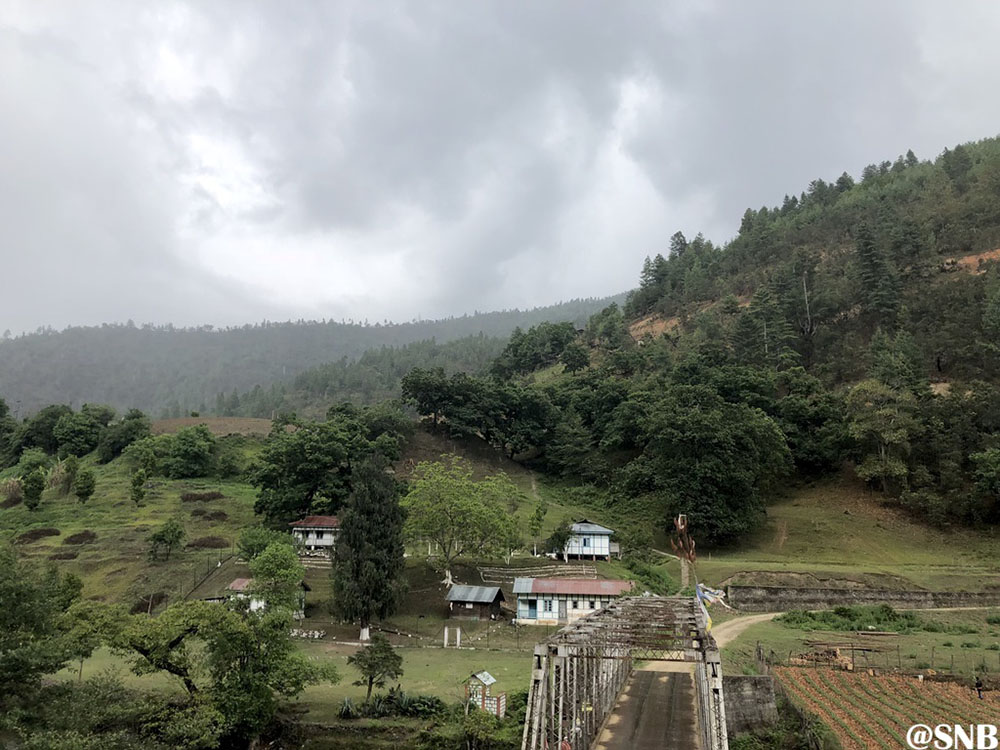 After some time, we reached the beautiful Sangti Valley. 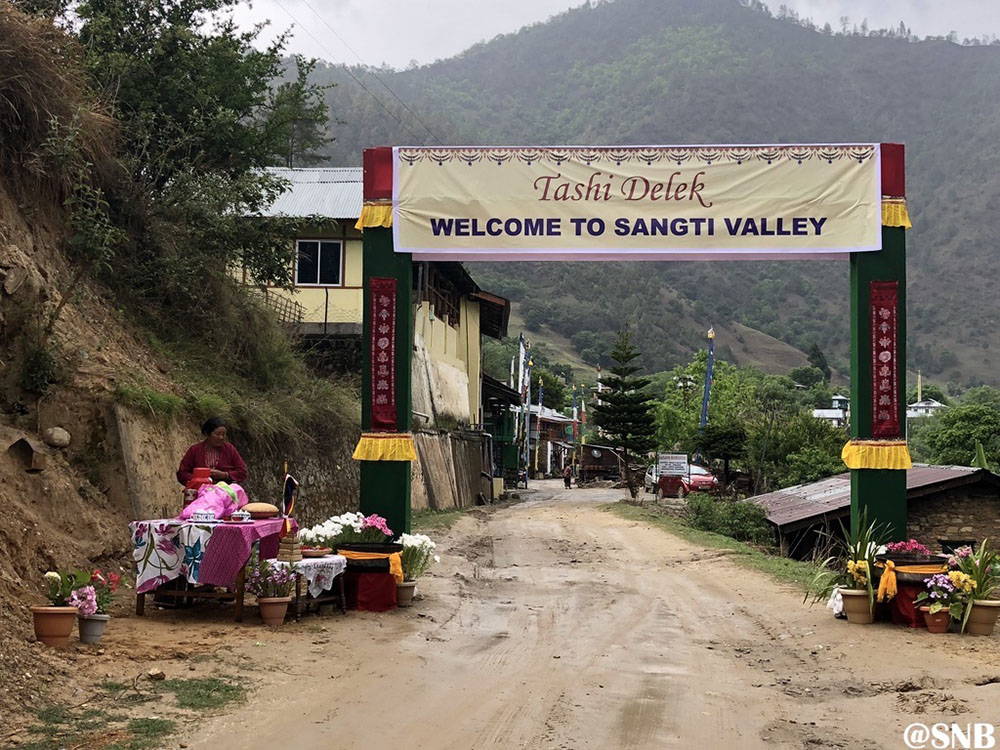 As we progressed, the valley widened. The road was along the foothill. After some time, the valley became so wide that the river became invisible. On the huge tract of land between the road and the river, cultivation and cattle grazing were going on. Since was a gloomy day, photos taken by us could not do justice to the beauty of Sangti Valley. 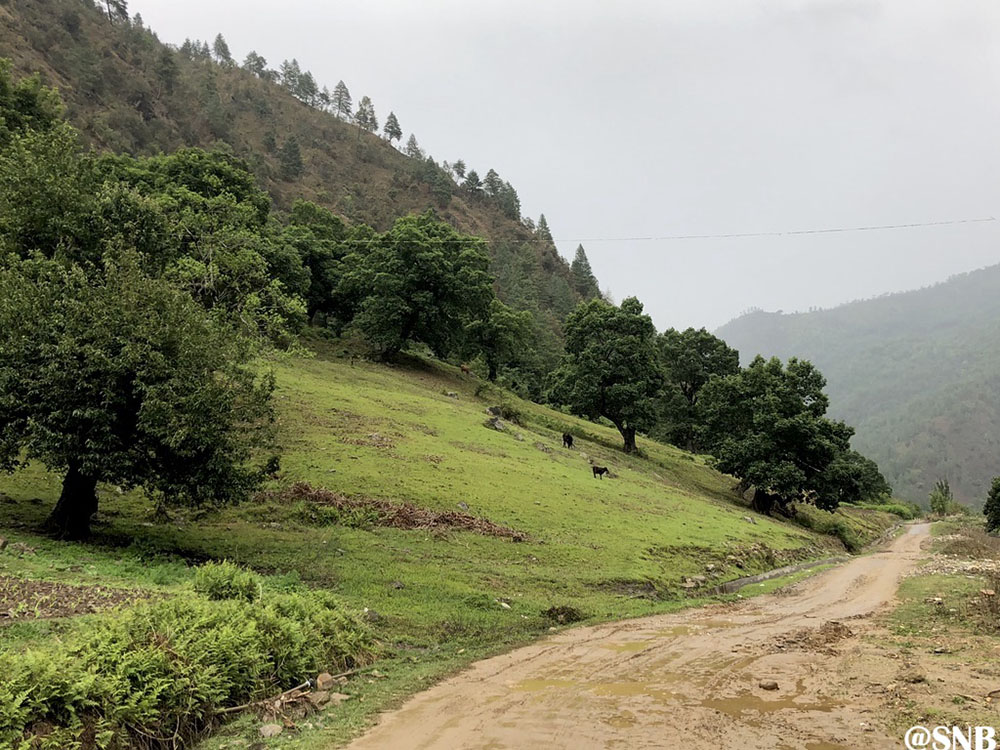 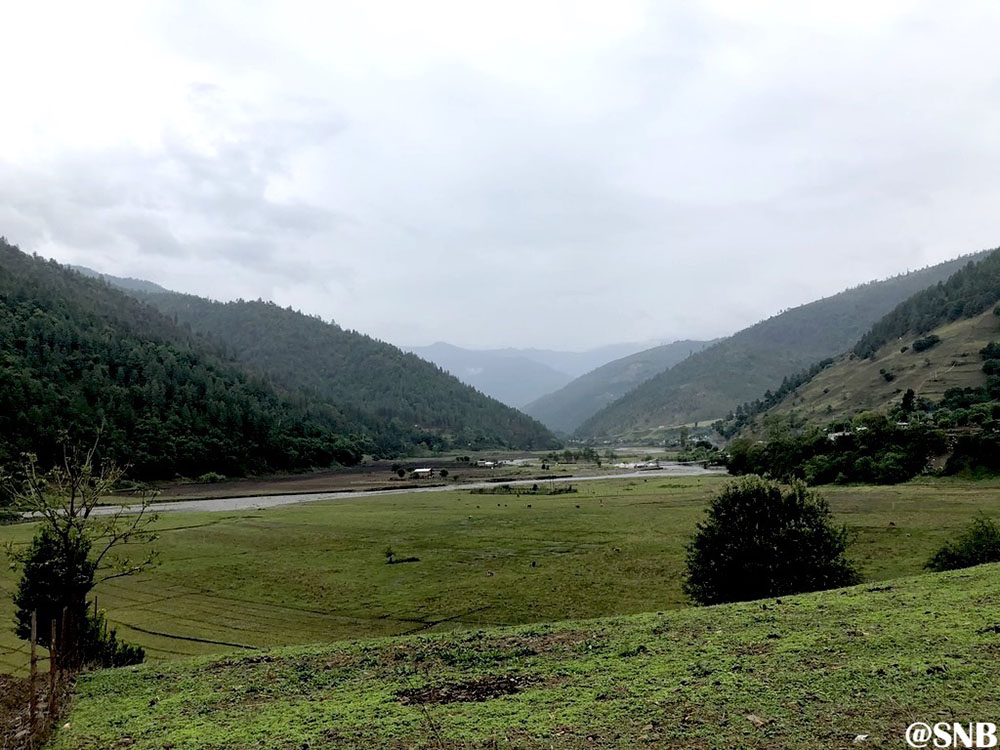 We kept on driving and crossed a few villages. The edge of the valley at this side of the river is bow-shaped. So after some time, the valley came to an end and we came back to the river.

We parked our Innova at the side of the road and came down to the riverbed and enjoyed some time there by walking in ankle-deep water, picking stones, and clicking photos. Later we came to know that there is a Ramkrishna Mission for the girls further down that road. 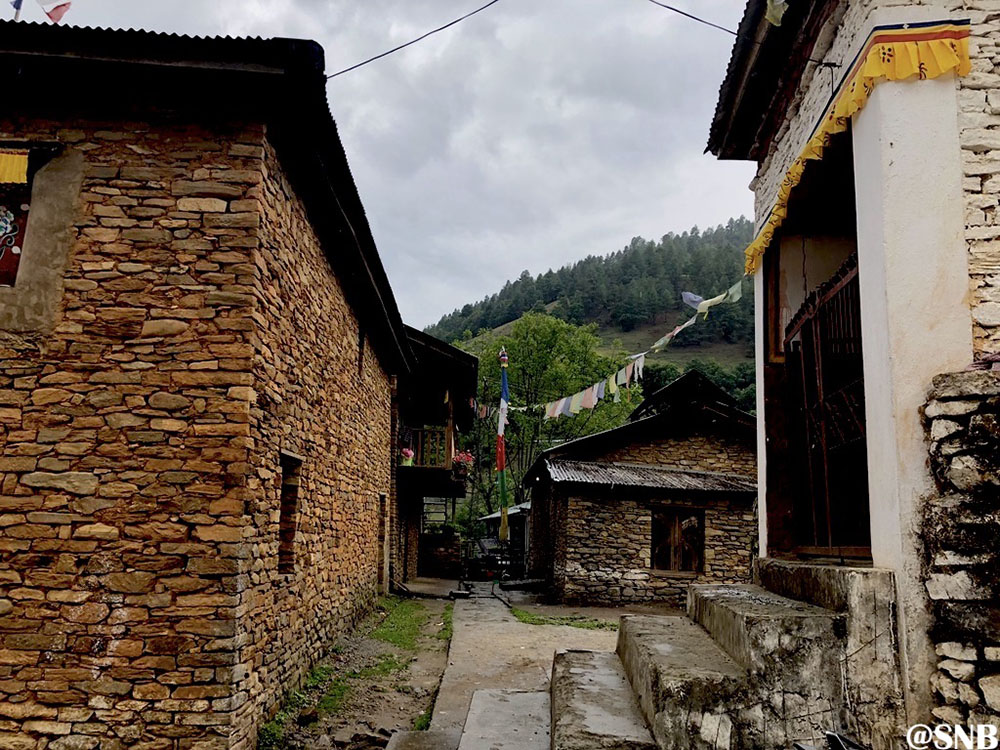 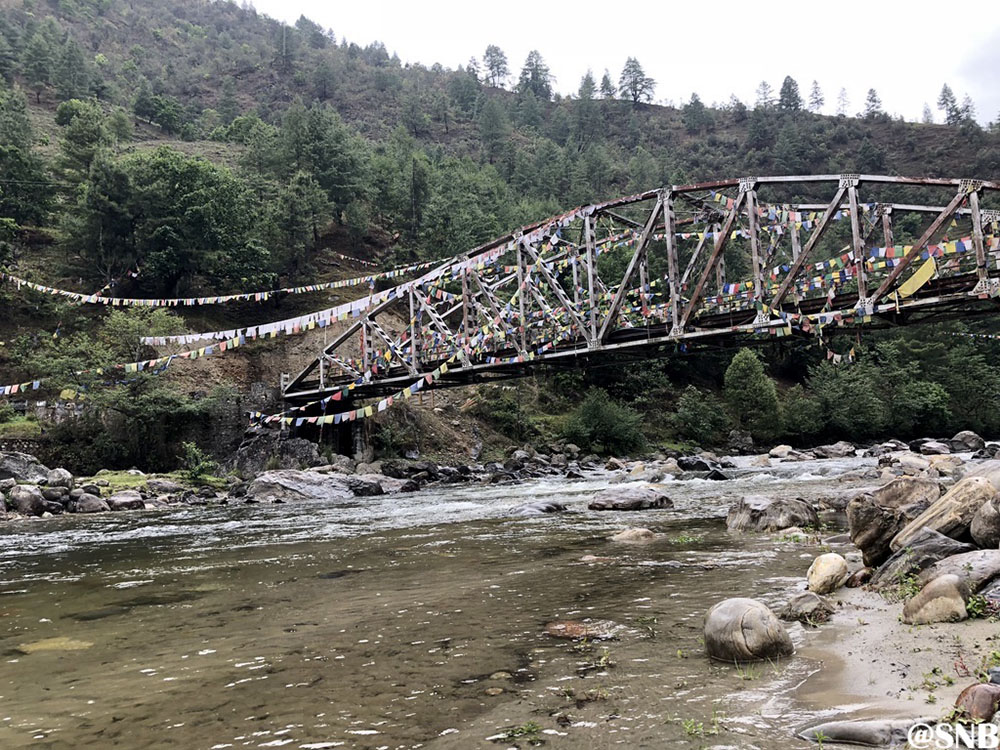 While coming back, we saw a large convoy of vehicles coming. Our vehicle was stooped and made to wait beside the road. That was Chief Minister’s convoy. A ceremonial function took place opposite the road where we were waiting. Once that function got over, the convoy left the place and we resumed our return journey.

While coming, we observed a small bamboo footbridge over the river. Local villagers to cross the river use it. It fascinated us. We decided to go to that footbridge while returning. It cannot be accessed directly by car.

So we parked our car on the road, which was at height from the footbridge, and walked down following a walking trail. Since it was raining, the trail was a bit slippery. Somehow we managed to reach that footbridge.

While we were standing on the footbridge some local youth came, asked for a cigarette, and invited us to their village. We had to decline the offer politely on account of the paucity of time. 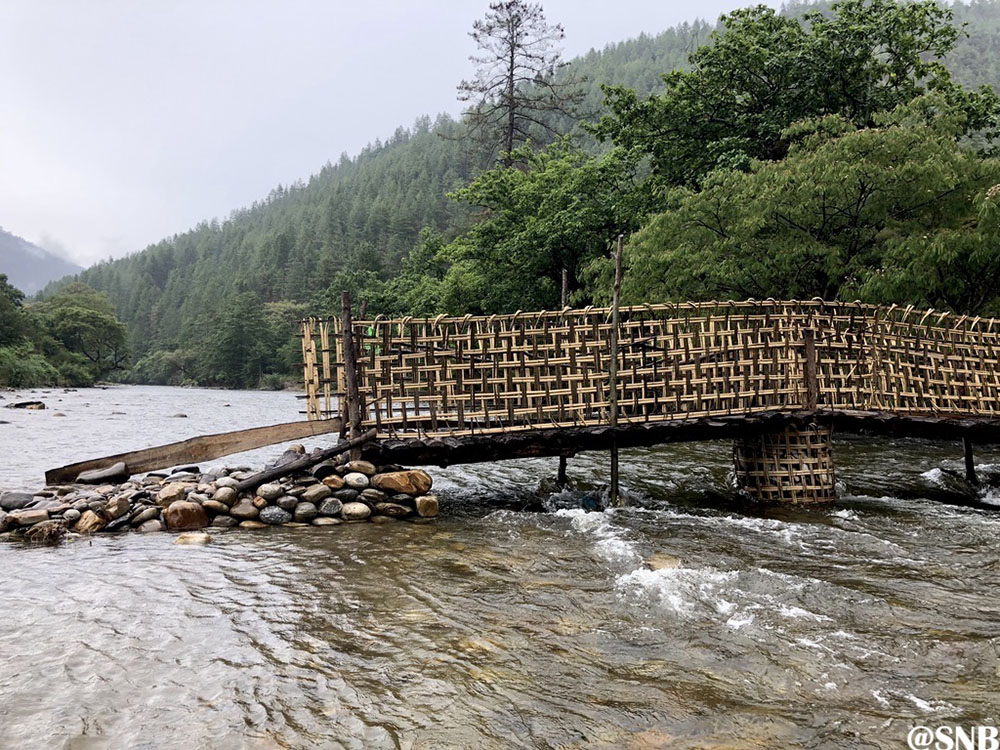 Sangti Valley won our hearts. Whenever we come to this side again, we will definitely stay one night at Sangti Valley and spend the entire day in the valley. On the road, we saw a few signboards of homestay.

This road leads to the Hotel Norphel Retreat, one of the most expensive hotels in this region. So we decided to take an about-turn. Maneuvering an Innova on the narrow road and equally, the narrow bridge was really difficult. I was cursing myself. 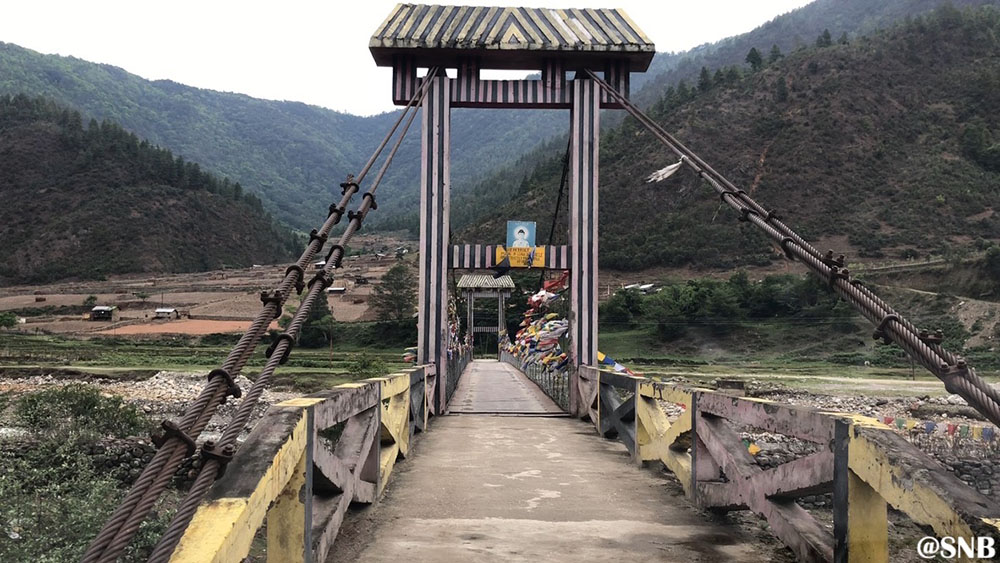 Our next destination was Dirang Monastery. So we came back to the NH and from the junction, took that branch which goes uphill. After some time, we were at Dirang Monastery. It was on a tabletop. It is a recently built-up monastery, is quite huge in size, and has a big parking lot. 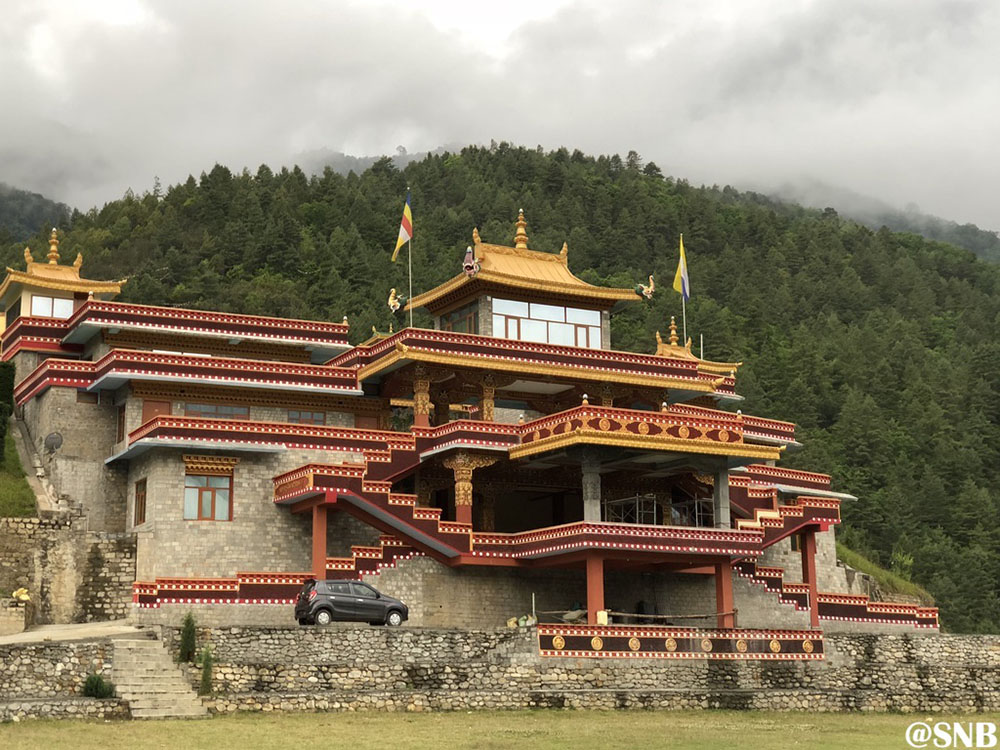 There was some vacant land beside the monastery where local youths were playing football. I am a football fan and therefore wherever I see kids/youths playing football, it gave me a separate kind of joy. It seems that in this land of cricket, the future of football is in the hand of the North-East. 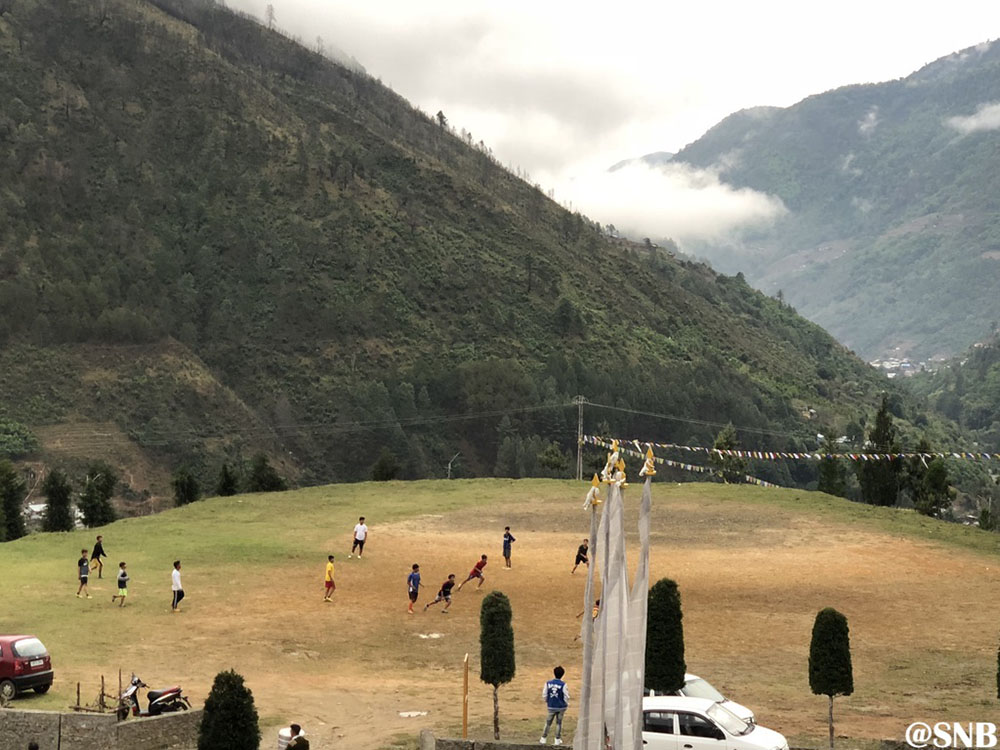 It was time to go back to the hotel. From the edge of the parking lot, the beautiful valley below was visible. It was slowly getting immersed into darkness. In a way, it was reflecting our mood. Effectively, it was the last day of this unforgettable trip.

The next we were in for a long drive, all the way from Dirang to Guwahati. From there, it was going to be a return journey home. Please click on the link above to continue reading the next part of the travelogue.

I hope the travelogue, pictures, and information on Sangti Valley were of help. If you have any questions, please feel free to ask in the comments section below or at our Community Forum, and I will be happy to answer. You can also follow me on Instagram and chat with me live there or subscribe to my YouTube channel and ask a question there.