This article is in continuation to a previous one and a part of my Mumbai to Tawang trip log. The post below is a detailed narration of our drive from Tawang to Dirang on the sixth day of the trip while covering tourist destinations like Khinmey Monastery, Jaswant Garh War Memorial, Sela Pass, and Nuranang Falls on the way. To read about the previous part of the journey, please click on the links below.

Every good thing in life comes to an end so did our stay in Tawang. We were going to start our return journey today. The final destination for the day was Dirang. But we planned to make stops at all possible attractions along the road which we skipped while coming. Khinmey Monastery was first on the block.

Ironically, it was the first bright sunny morning we got on our trip. That day I got my best click of Tawang Monastery from a distance. 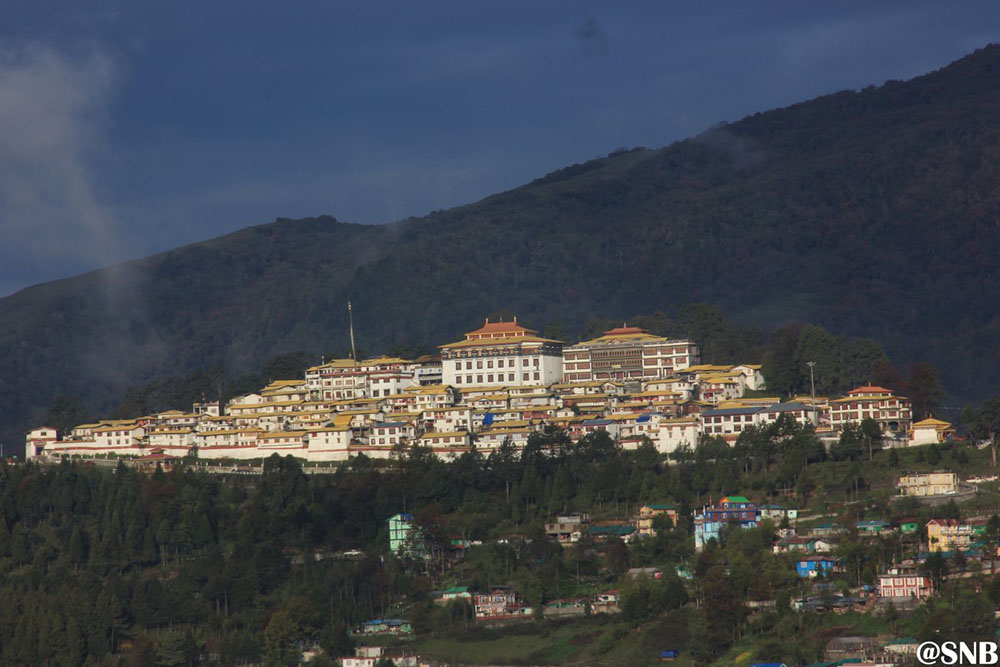 For Khinmey Monastery, you have to take a detour to your left-hand side from the highway while coming to Jung/Sela from Tawang. Somehow Google Map was not being able to locate the Monastery so we were stopping time and again to ask locals for the direction.

After taking the diversion from the Highway for the monastery, while we were going to Khinmey Monastery, we noticed a small but nice Chorten on the right-hand side of the road. 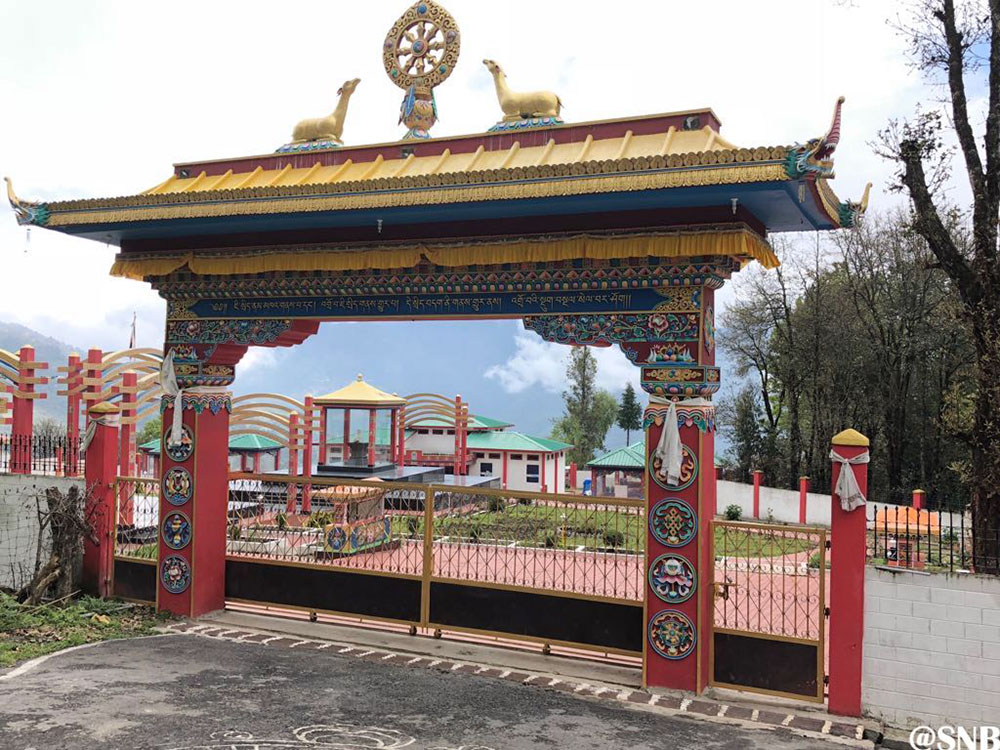 The monastery became visible after some time. The road was generally ok but at some places, road repairing was going on and the condition of the road was too bad. The slush was quite deep and wheels were slipping laterally.

We reached Khinmey monastery around 10.30 am. It was quite big though not as big as Tawang Monastery.

When we reached there, though there were many monks, no common visitor like us was there. The main hall was closed. At our request, they opened the main hall. 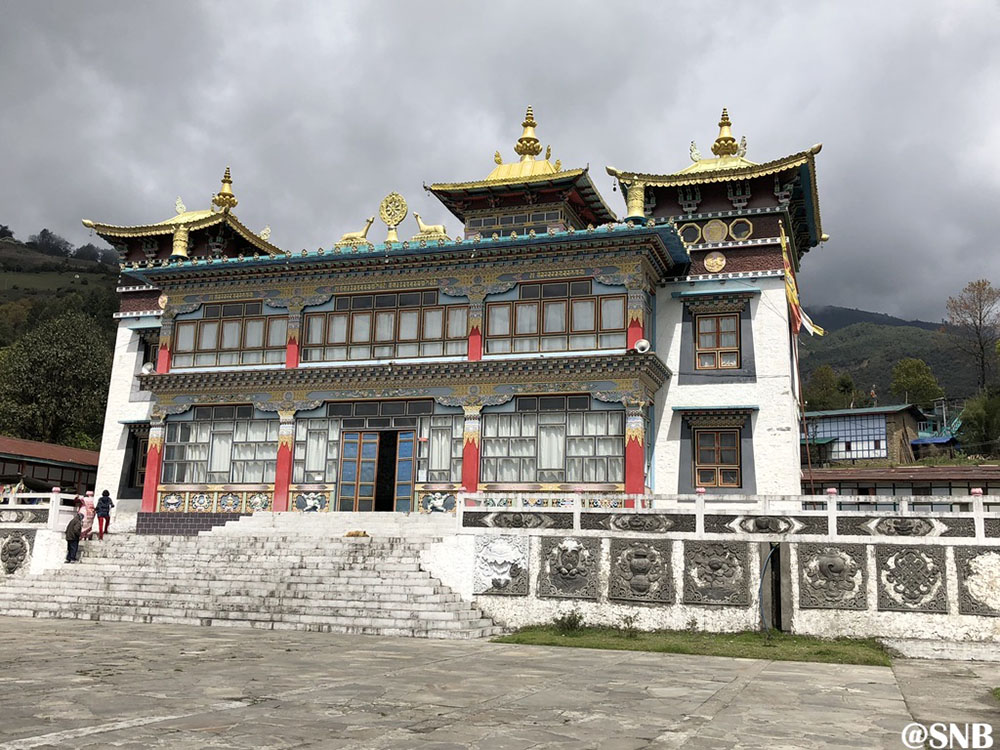 The Monastery has a vast courtyard and the edge of the courtyard offers a panoramic view of the valley. 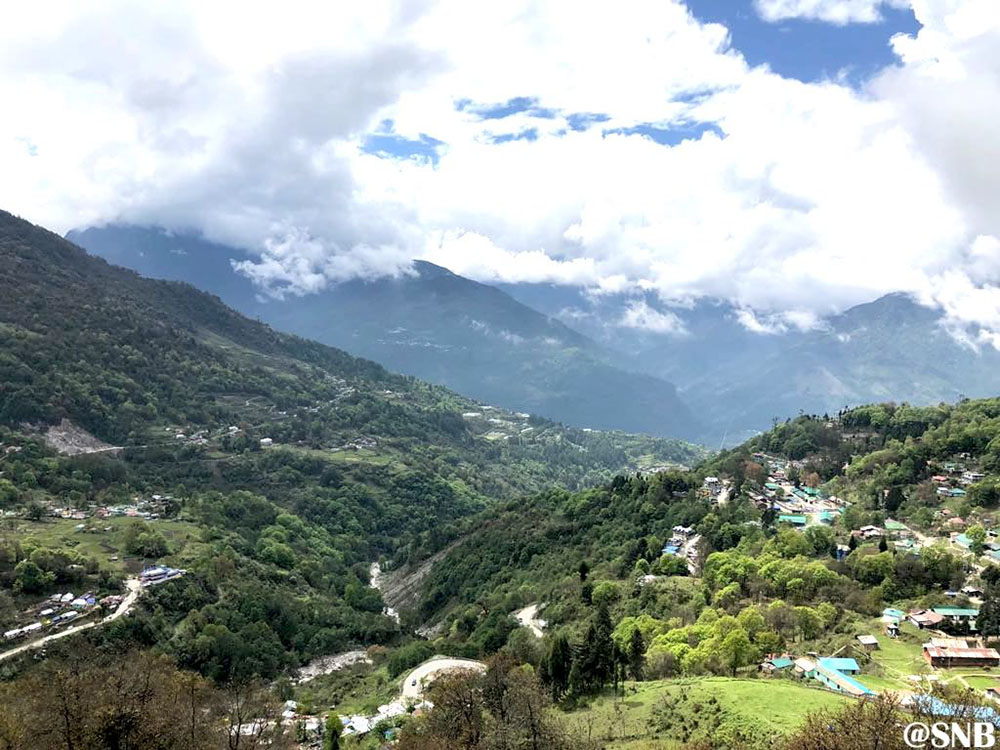 After finishing the visit, we started for the Nuranang falls at Jung. For the same, it was not required to come back to the same place of the highway from where diversion for Khinmey Monastery was taken.

After backtracking a bit, we took a right turn and that road took us to the Highway at a point, which was nearer to Jung compared, to the place from where we took diversion for Khinmey Monastery.

Till that time, it was a clear sunny day. There was less traffic on the road. The road was good. It was a cool drive.

Nuranang falls is not exactly on the highway. You need to cross a bridge just before entering Jung from Tawang Side. Immediately after crossing the bridge, a left turn is to be taken. 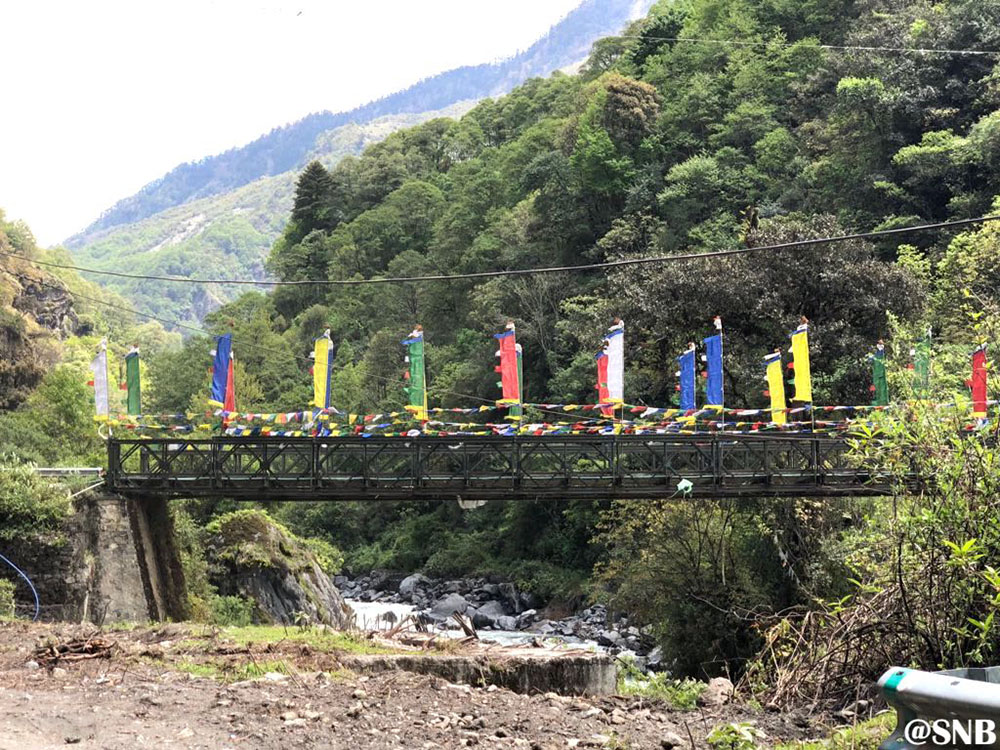 From the highway, it was a very short drive. The road was good. But the incline was quite steep. There is a good parking lot which offers a good view of the waterfall. 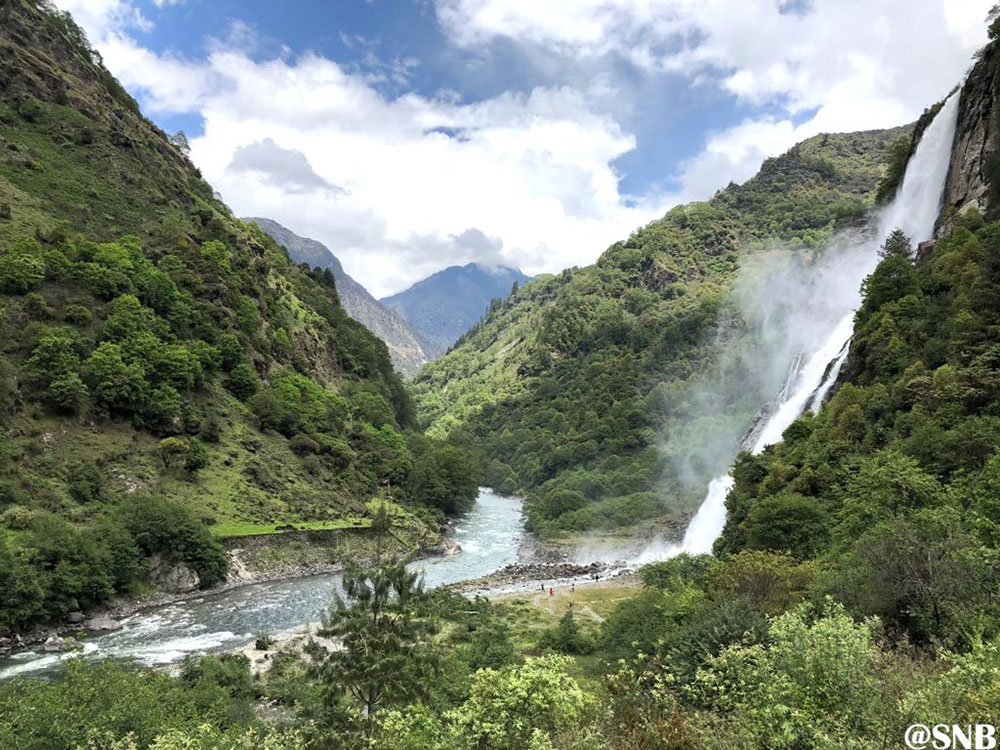 Some locals told us that it was possible to go to the riverbed nearer the waterfall on foot. There was no second thought. There was a permanent staircase. So, after a few minutes, we were in front of the majestic waterfall. We found a few brave hearts taking bathe. But I have learned to control temptations and stay within my limitations. 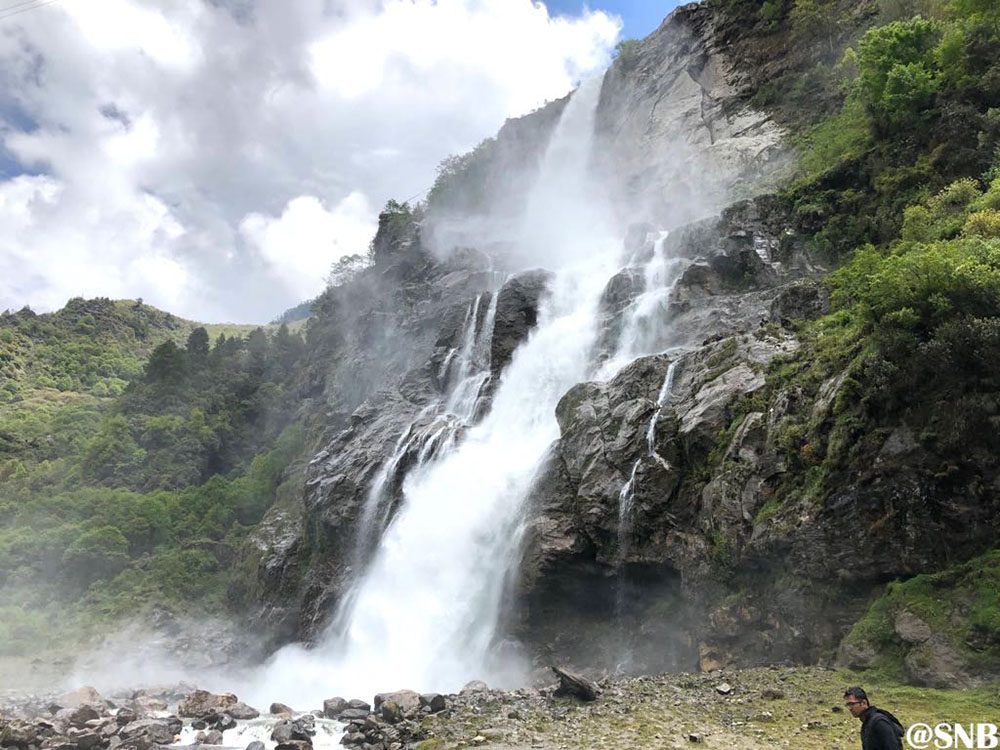 Before leaving Jung, we took diesel from Jung Petrol Pump. By that time, it became imminent that the Rain God would take control of the sky from the Sun God. And by the time we reached Jaswant Garh War Memorial, a heavy downpour started.

The War Memorial is on the right-hand side of the road while coming back from Tawang. On the left-hand side, there was a shed for the Tourists and a small canteen managed by the Army where Tea, Pakoda, and Idli were available. Tea was free of cost and Pakoda and Idli were for a nominal charge.

While waiting under the shed for the rain to subside, we had a few cups of tea and a few plates of Pakoda. After some time, once the intensity of rain reduced, we made a quick visit to the memorial to pay homage to the martyrs. 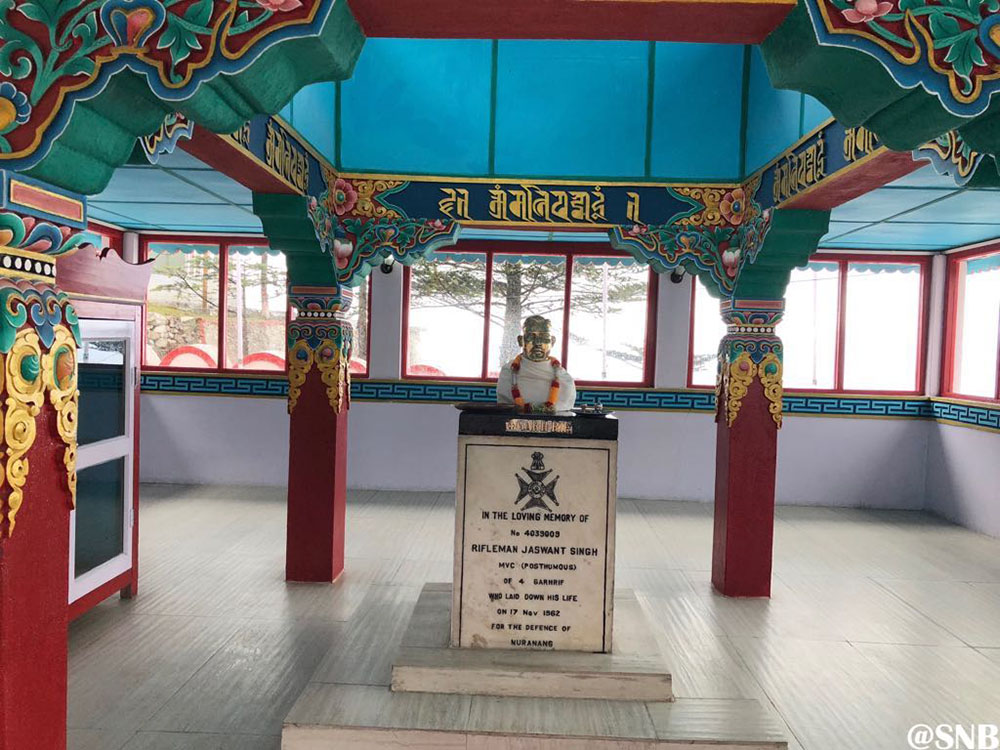 When we started for Sela Pass from there, the sky ahead was looking ominous. Though we had no plan to stop before Sela, the beauty of nature forced us to give a pause to our journey and to click the shutter. 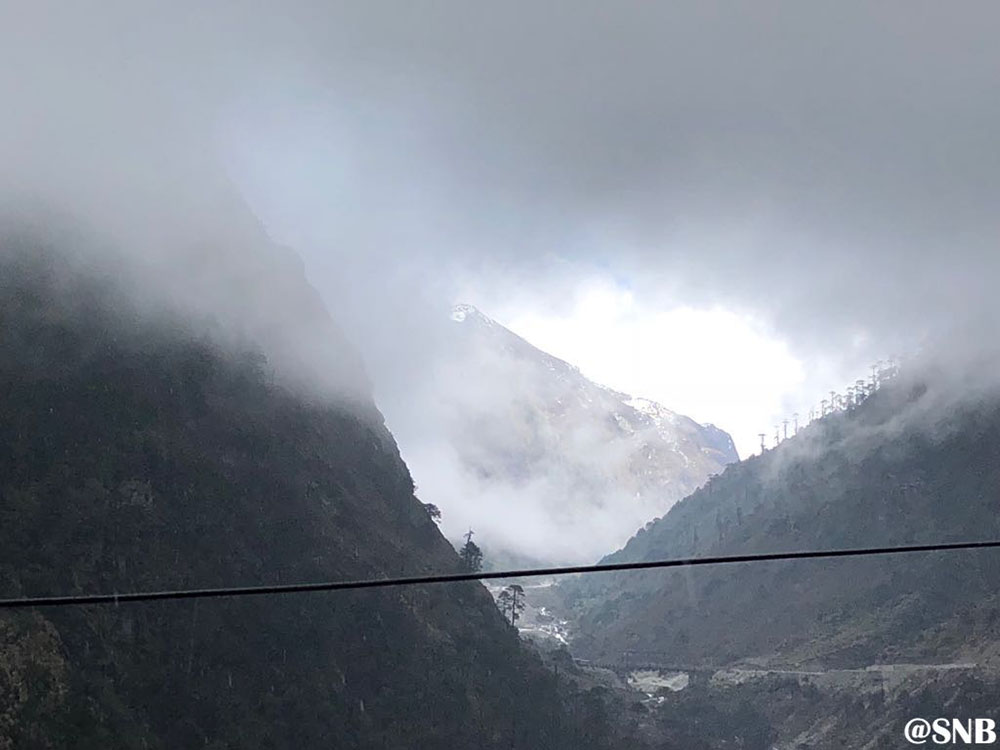 After some time, we entered Snow land. This time also, we reached Sela after 2 pm.

It was snowing at Sela Pass on that day too. But the intensity was very less compared to what we got at the time of the incoming journey. So, we leisurely enjoyed the beauty of the magnificent Sela lake. 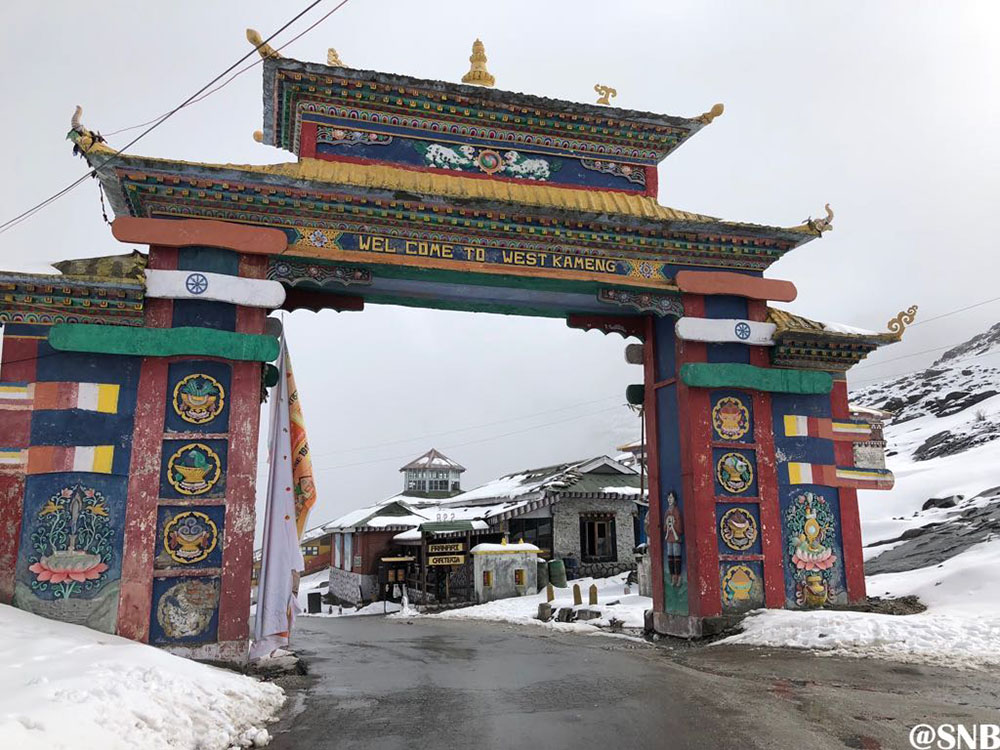 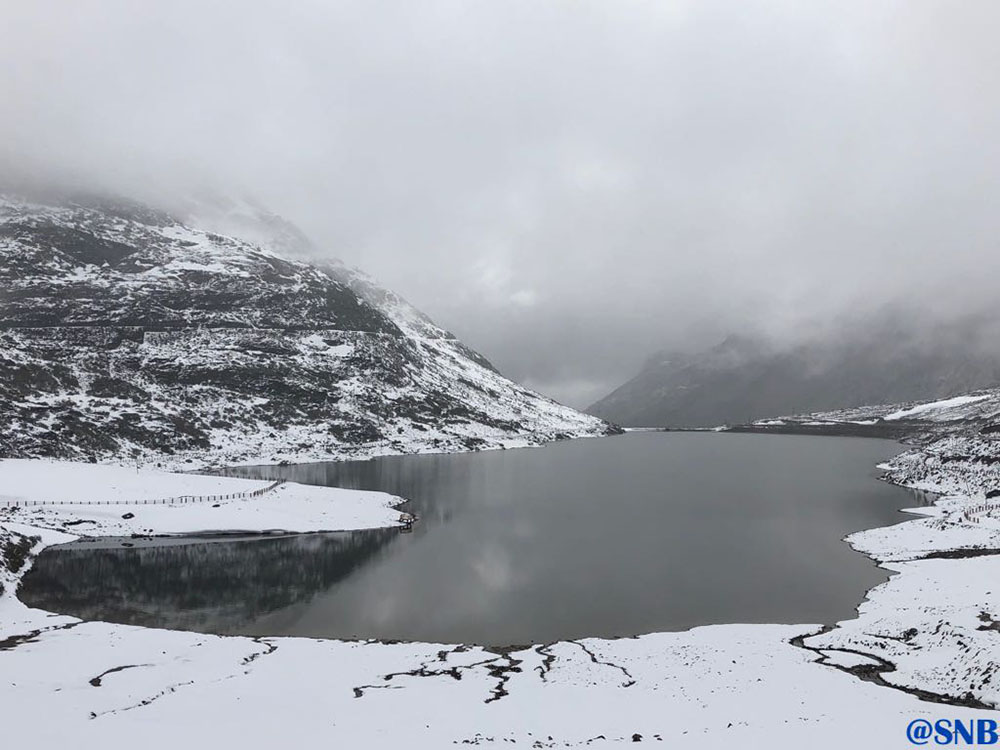 Since it was well past 2 pm, the army canteen was closed. But we discovered a small shop, run by a mother and Son, offering Noodles, Thukpa, Momo, Tea, Coffee, and dry snacks. The price was very reasonable.

They were charging a premium of Rs. 10/20 over the MRP. At Sela Pass, that premium is more than justified. We had hot noodles followed by tea and found the same awesome.

After snacks and tea, we spent some more time there to feel the thrill of being at mighty Sela Pass. 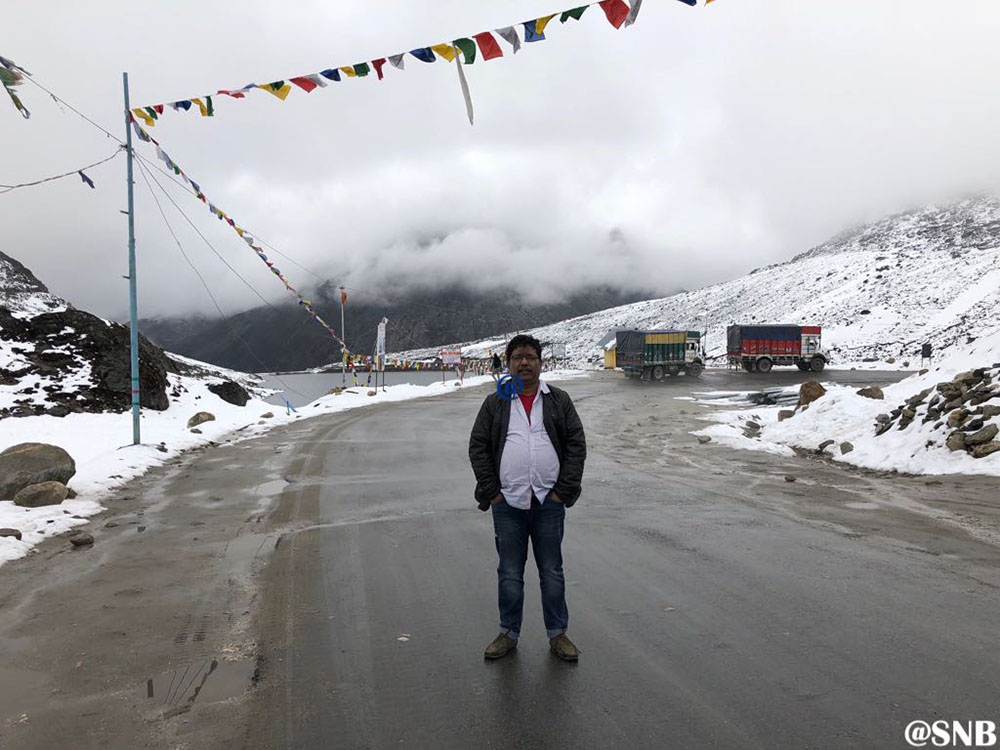 After Sela Pass, we just stopped once before reaching Dirang. That was at an army shop. We saw a couple of shops, between Dirang and Sela Pass, which were selling Army Jackets, Sweaters, Trousers, T-Shirts, Caps, Boots, etc.

Army people manage those shops only. We got down to one of those shops for doing some shopping. We were late. No Jacket or Trouser was available. So, we bought some T-Shirts. Something is better than nothing.

The road condition was generally good. At some places, for a few hundred meters stretches, the condition was pathetic. No sign of bitumen was there. It was only thick slush of mud. Somehow, we did not notice it while going to Tawang.

Either, it was done by Mother Nature in the previous 2-3 days or Army is completely overhauling the road. Whatever may be the reason, driving was really tough on those stretches.

We reached Hotel Snow Lion at Dirang around 6 pm. The plan ahead was to stay for a day in Dirang and explore the beautiful Sangti valley. Please click on the link above to continue reading the next part of the travelogue.

I hope the travelogue, pictures, and information on Tawang to Dirang road trip and Nuranang Falls were of help. If you have any questions, please feel free to ask in the comments section below or at our Community Forum, and I will be happy to answer. You can also follow me on Instagram and chat with me live there or subscribe to my YouTube channel and ask a question there.