This article is in continuation to a previous one and a part of my Mumbai to Tawang trip log. The post below is a detailed narration of the third and fourth day of the trip. We spent Day 3 sightseeing in Tawang and went for a drive from Tawang to Bumla Pass on Day 4. To read about the previous part of the journey, please click on the links below.

Since we were continuously driving for the previous two days, we decided to keep the plan for Day 3 a little light. Getting permission for Bumla Pass, arranging accommodation for the 3rd and 4th day at Tawang and local sightseeing was the agenda.

Getting up, I immediately went to the balcony to check the weather condition. It was cloudy. 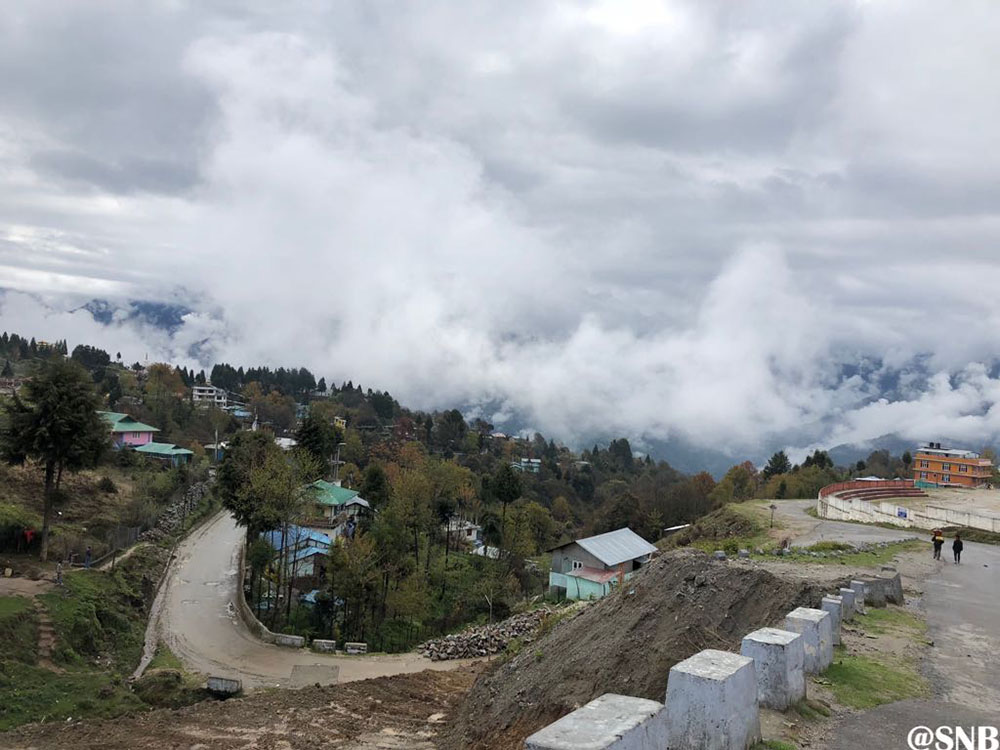 We checked Booking.com and found that rooms were available. So after finishing tea and giving copies of ILP and other necessary papers to the Hotel Manager for permission for Bumla Pass, we went to Hotel White House. By that time, cloud cover has moved and the Sun has come out. Tawang was looking really beautiful. 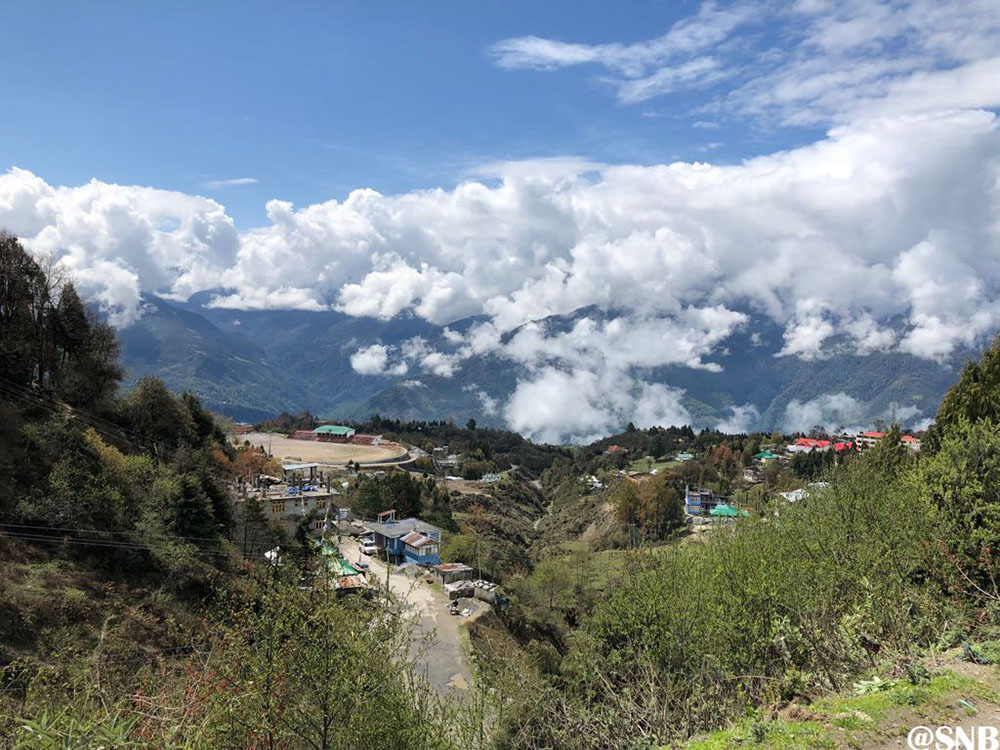 Fortunately, we got rooms at Hotel White House for the 3rd and 4th night. The rate was Rs. 1500/- per room per night including breakfast. We booked 4 rooms.

By the time we came back to our hotel, everyone was ready. So, we had our breakfast immediately and started for Tawang Monastery.

Tawang Monastery is a three-storied building. It is a part of quite a big complex. It is located on a ridge north of Tawang town. The entire complex is guarded by a compound wall. 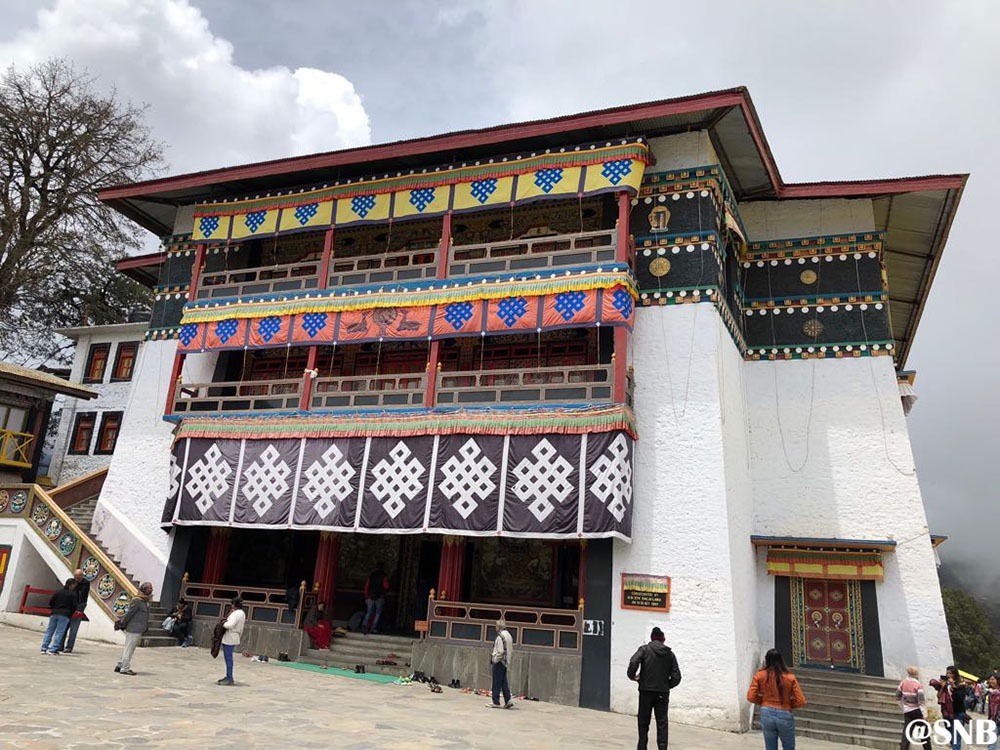 Other than the main monastery, there are many residential buildings in the complex. All the buildings are white. The roofs are colored bright yellow. Narrow alleys separate the buildings. The overall atmosphere has a mystic tinge. 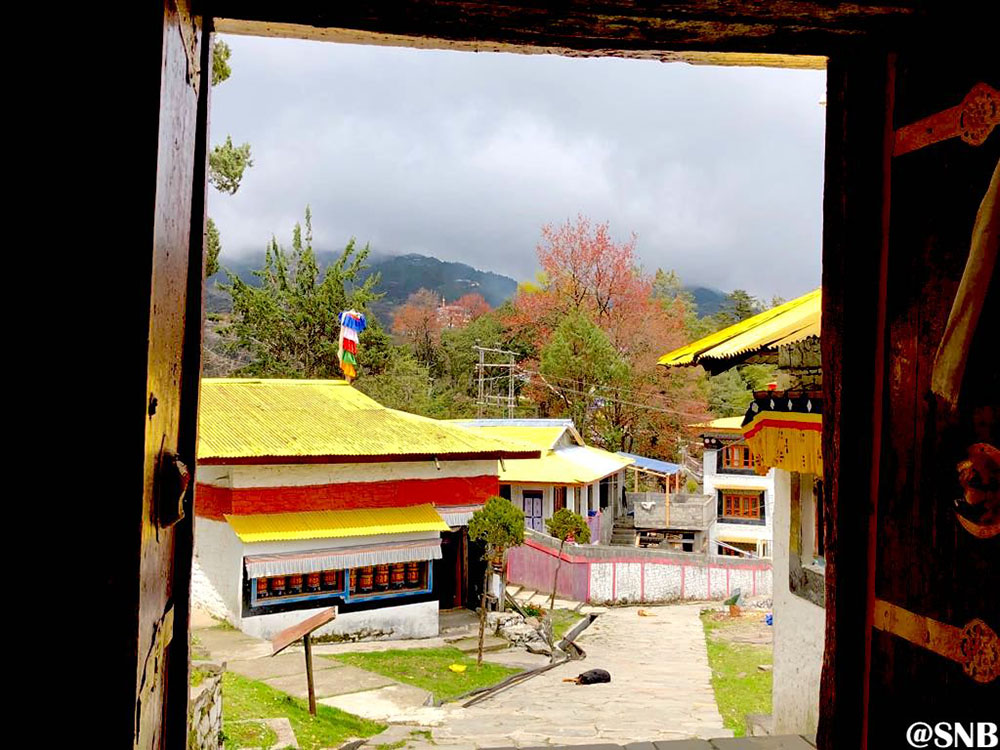 We spent around 90 minutes at Tawang Monastery. Our next destination was Urgeling Gompa. Google Map was not being able to see the location correctly. So, we were trying to reach there by trial and error method by taking the help of local. This resulted in some aimless driving through Tawang Town. But given the panoramic view Tawang offers, we did not mind that.

We reached Urgelling Gompa around 1 pm. It is a bit cut-off from the main town, a bit secluded. 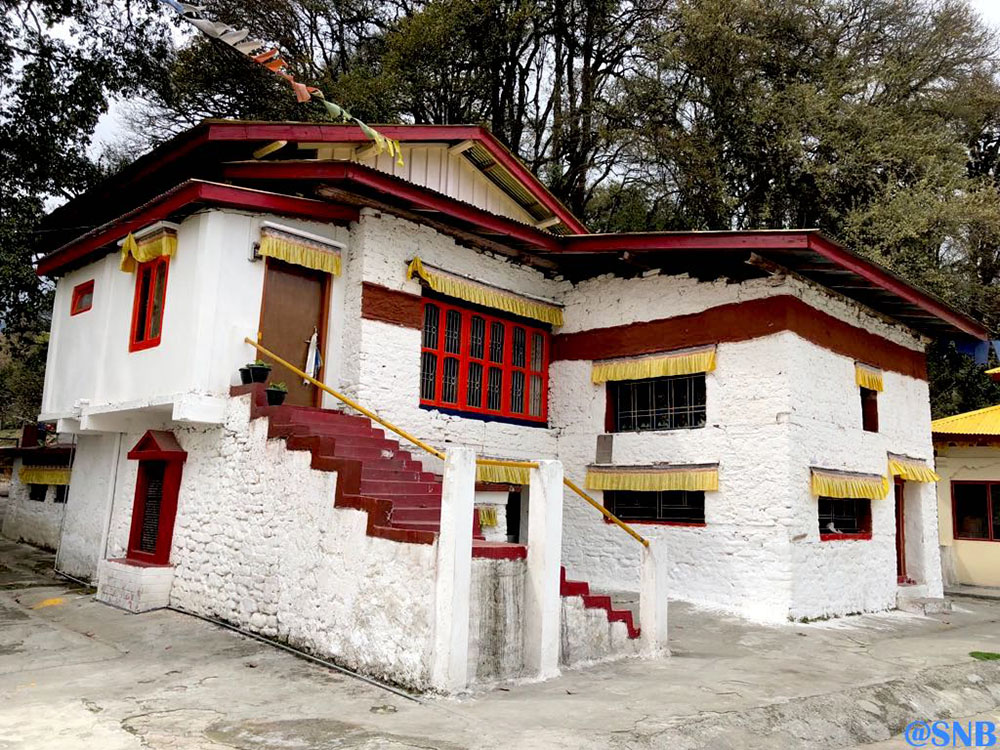 There was no one in the Monastery other than 3-4 monks. The door of the prayer hall was shut. At our request, they opened it. We found that the inside is a bit different from other monasteries seen by us. The atmosphere of Urgelling Gompa is very calm and soothing.

From Urgelling Gompa we went to the War Memorial and paid homage to the martyrs of the 1962 war. 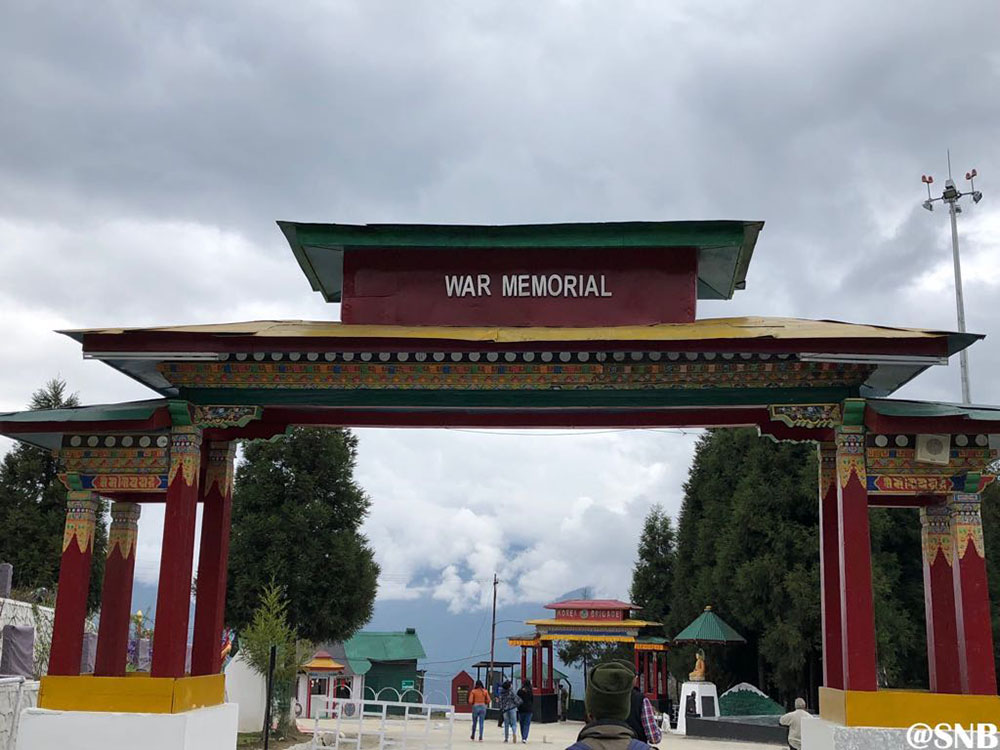 By the time we finished our visit to the war memorial, it was quarter to 3 pm. We were feeling hungry so headed to the market. By this time, the clouds have regained their lost ground and taken firm control of the sky. Surrounding had become dark. Heavy rain was imminent.

So, we quickly finished our lunch and rushed to Buddha Park. The moment we entered Buddha Park; the rain started. Somehow, we managed to take a few clicks.

The rain was so intense that we were forced to get into the car. Looking at the sky we realized that rain would not stop immediately. So, we decided to pack up for the day. It was 4 pm then.

It was the D-Day. While booking the car for Bumla, we had requested time and again our Hotel Manager to ensure that the vehicle comes by 8 am.

The reason, on the basis of whatever we had heard and read, that, the Army did not allow to go beyond Y-junction, from the road for Bumla and that for Sangetsar Lake (Madhuri Lake) separate, after 2 pm. So, if you start late, in all probability, you have to skip one.

But, as apprehended, there was no sign of the driver till 8 am. After continuous phone calls and follow up, he finally arrived around 9 am because he was not being able to locate the hotel.

Since we were supposed to be relocated at Hotel White House on that day, we used this one hour to transfer all our luggage to the new hotel. So we started almost 75 minutes behind the scheduled time and I understood we will miss Sangetsar Lake (Madhuri Lake)

Once we came out of the Tawang town, the steep climb for Bumla started. It was down pouring heavily. We were part of a large convoy of Bumla bound tourist vehicles and Army trucks. 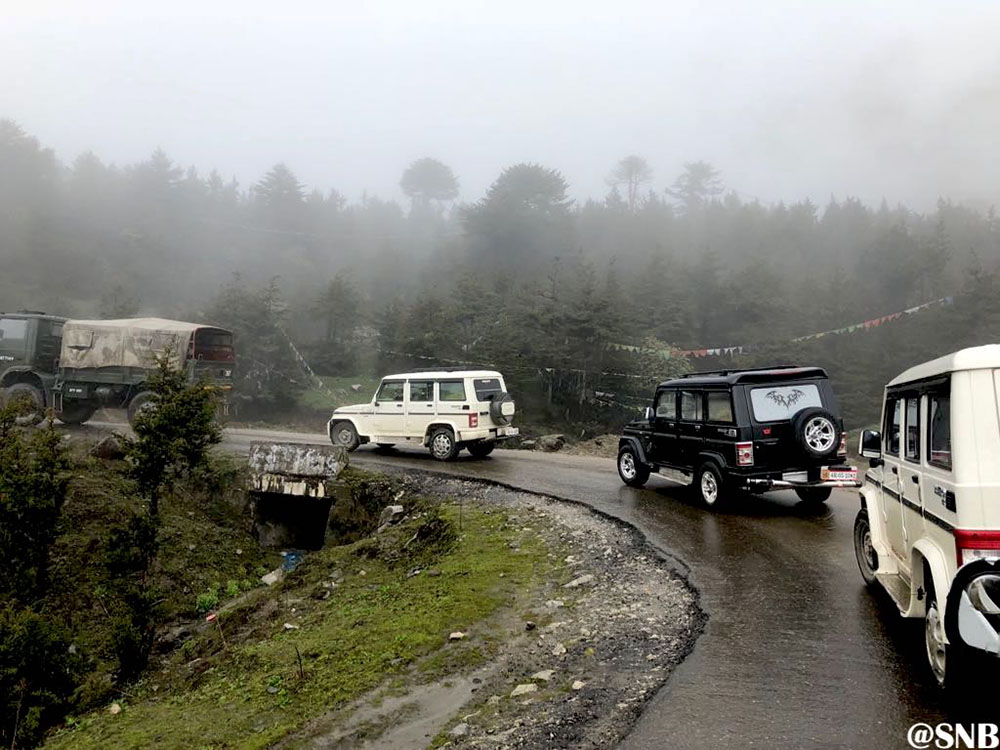 After some time, we crossed a check post where the permit for Bumla got checked. Then came Penga Teng Tso Lake (PT Tso Lake). We did not get down and our drive continued. 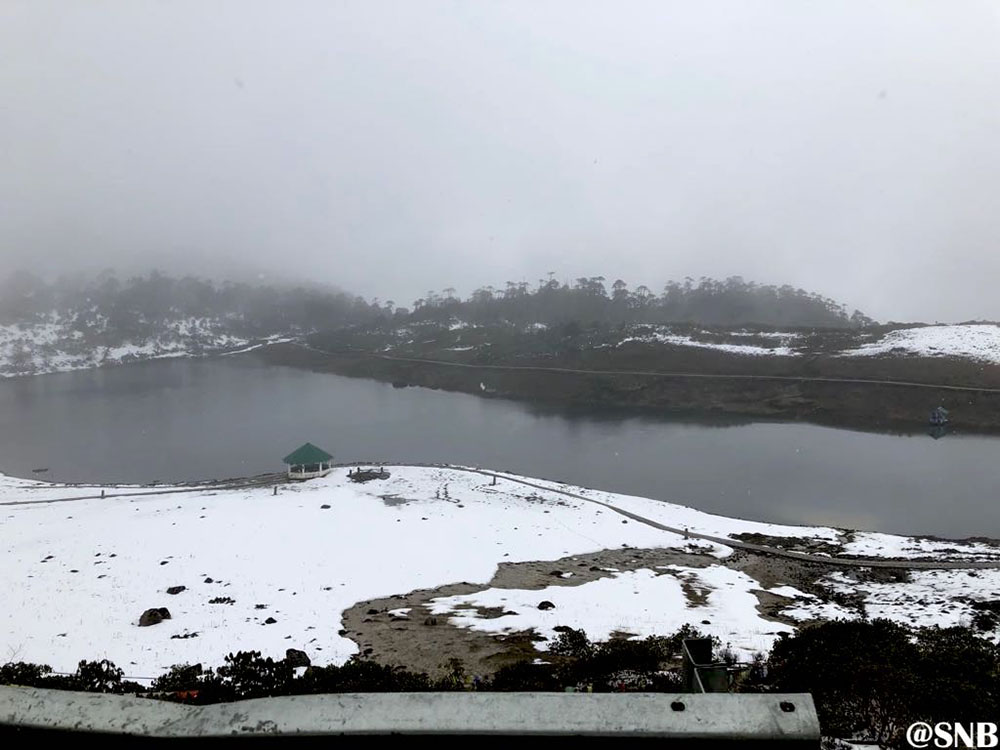 Road from Tawang to Bumla Pass

Till PT Tso Lake, the brown surface of the Earth was visible. After that, it became all white. As we were progressing, the layer of ice at both sides of the road was getting thicker. The road became slippery with a slush of mud and ice.

The saving grace was that after the initial steep climb from Tawang, the gradient was moderate. The surfaces at both sides of the road were more or less flat barring a few places. There also, the fall was not that deep.

Our first stop of the day was at a tea stall. We were not very interested to take a stop because we were late. But our driver was very keen to have hot tea with a smoke. It might be his time-wasting tactics but we had no option other than obliging him. We utilized the stop by getting wet in the snowfall, soaking the atmosphere, and taking some photographs. 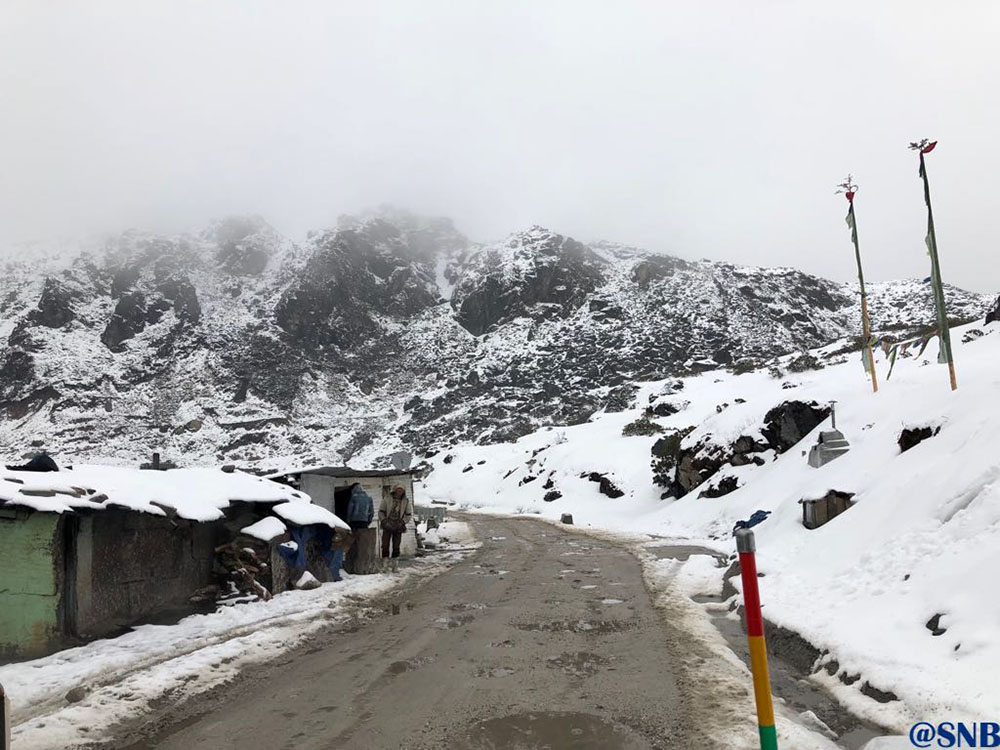 We reached Y Junction around 11.30 am. In between, we, for that matter the entire convoy, had to stop a couple of times. The exact reason was unknown. We played with snow and took photos during those stoppages. The layer of ice beside the road reached waist height. 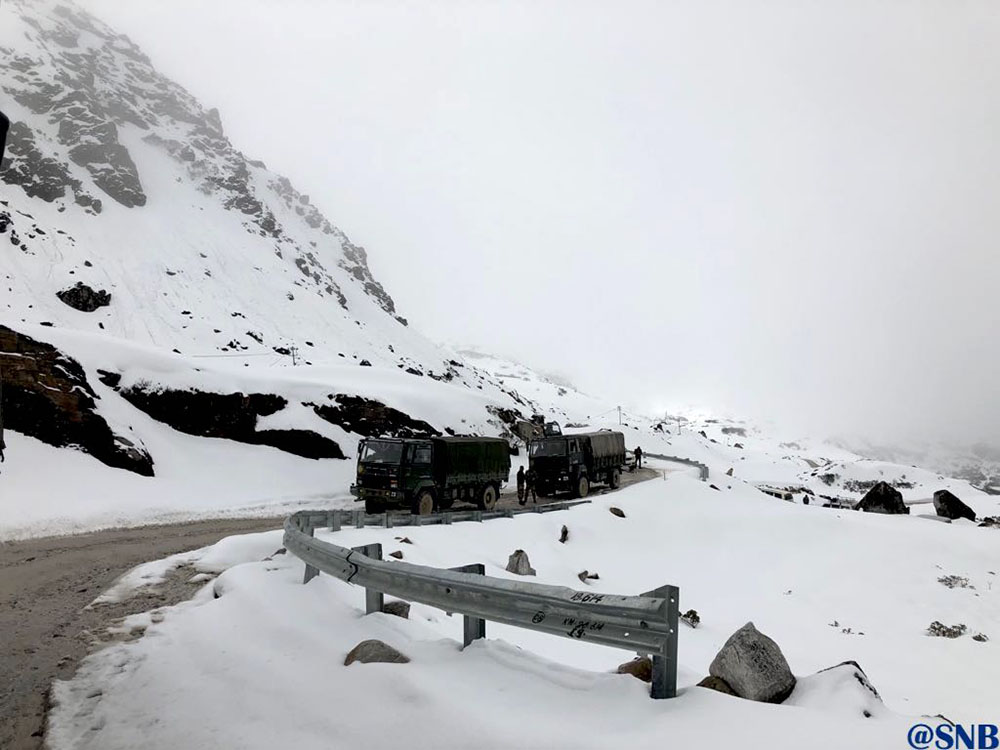 From Y Junction, the road bifurcates. The right one goes to Bumla. The left one goes to Sangestar Tso Lake, T Gompa, and finally to Zemithang.

After Y Junction, a number of Army Trucks on the road came down substantially. So, we were requesting our driver to pick up some speed so as to reach Bumla as early as possible. But there were multiple obstacles. The road was quite narrow. The surface was completely slushy. At some places, it was a very steep climb.

At some places, there were steep and deep falls beside the road. The sky was quite dark. Snowfall was very intense. And on top of all these, the driver felt hungry and was compelled to take a stoppage at a Momo shop. We reached Bumla around 1 pm.

It was snowing profusely. In Bumla, the Army maintains a big restroom where the tourist can sit and take some rest. The Army also provides hot tea there. There is a small souvenir shop also in that hall.

From that hall, the actual border/LOC is a few hundred meters walk. The army allows people to go to the actual border in batches. Once one batch comes back from the border to the hall, then they allow the next batch to go.

Our term came after 20-30 minutes. By that time snowfall had stopped. There is a narrow walkway over the ice. Ice was hard and slippery. So, we reached the actual border after a ‘balanced’ walk.

Once we reached the Border/LOC, one Army Man gave us a small talk on how the border is passing through at that place, the border management system being followed by India and China, and various restrictions, which we need to obey during our temporal stay at Bumla.

The bottom line was ‘stay at the Indian side but take photos of the Chinese side’. Though, there was nothing to be photographed on the Chinese Side other than an unending ice cover. 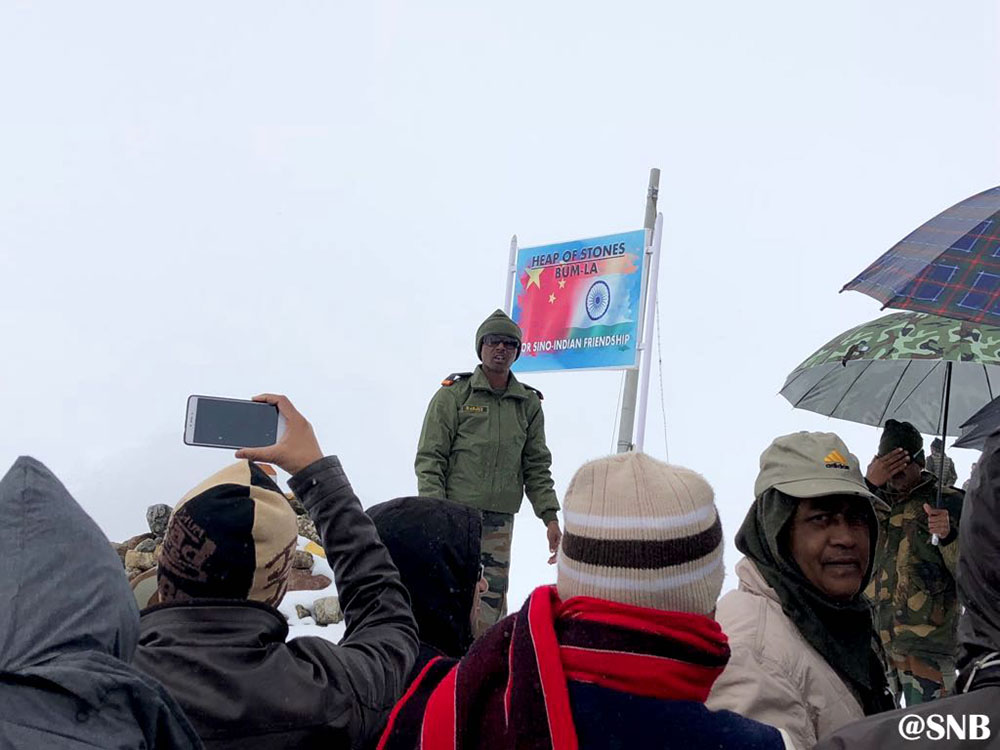 We spent around half an hour there. We started our return journey from Bumla at well past 2 pm. By the time, the Sun had managed to break the shackles of the clouds and came out all cylinders firing. The ice-clad peaks around Bumla were looking glorious in bright sunlight.

While going to Bumla, my whole concentration was when to reach Bumla and my eyes were on the road or the wristwatch. While returning, I was more relaxed. Bumla had been done and Sangestar Tso Lake couldn’t be done. So, I started enjoying the beauty of the surroundings.

There are a number of water bodies along the road to Bumla. The color of the water was greyish. It was surrounded by white ice from every side. Blue Sky at on as the background. Shades of Grey and White made a fascinating color combination. 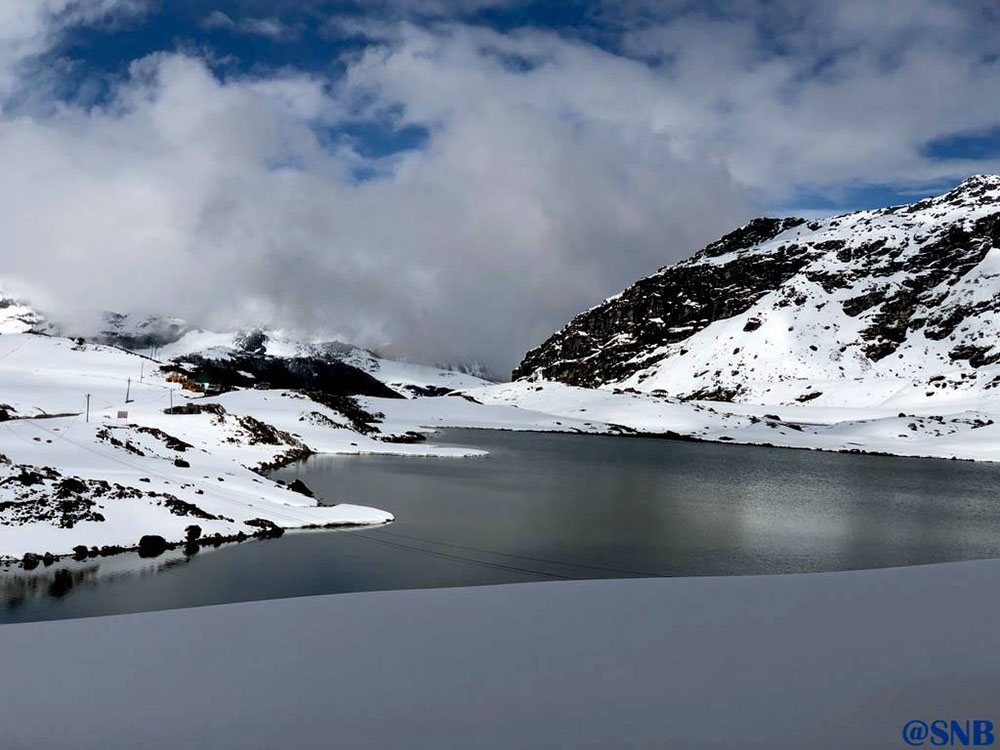 Once we reached Y Junction, we tried our luck for SangetSar Lake. The reply was ‘no’. So, we took our next stop at PT Tso Lake.

The road is at a height from the water level of PT Tso Lake. There is a permanent staircase for reaching near water from the road. But the lower part of that was submerged in a heap of ice. So it was not possible to go near the water.

There are some permanent seating structures around the lake. But those were also not easily accessible because of snow. So, we took some photos of the lake from a distance and left. 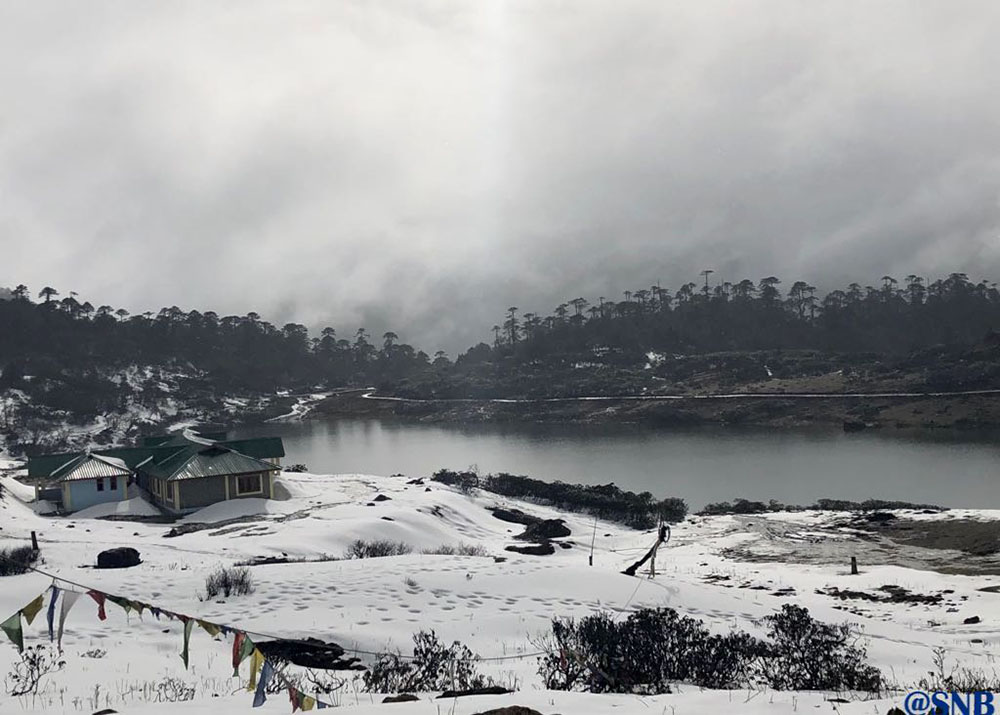 By the time we reached Tawang, the sky was clear and blue. After ample does of ‘White’ throughout the day, ‘Green’ was a welcome change for our eyes.

We went to Zemithang the next day using our own vehicle. There are two routes for Zemithang, one via Lumla and another via Sangetsar Lake. We went via Lumla and did not face any problem.

If you try to go via Sangetsar Lake, you may face some problems from the local vehicle drivers/owners. Please click on the link above to continue reading the next part of this travelogue and get more details.

I hope the travelogue, pictures, and information on Bomdila to Tawang road trip were of help. If you have any questions, please feel free to ask in the comments section below or at our Community Forum, and I will be happy to answer. You can also follow me on Instagram and chat with me live there or subscribe to my YouTube channel and ask a question there.