Marsimik La – A Road Trip from Pangong to Marsimik La

This article is in continuation to a previous one and a part of my Leh Ladakh Travelogue. We traveled from Delhi to Leh via Manali and then arrived at Pangong while covering Tso Moriri and Hanle on the way. On Day 10, we conquered the mighty Marsimik La Pass, details of which are provided in the article below. Please click on the links below to read the previous part of the travelogue.

Every traveler to Ladakh dreams of conquering Marsimik La, the highest “motorable” road in the world, and we were no different.

Our homestay in Spangmik was wonderful. The food was delicious, and our hostess was very nice. Her mother was not feeling well the night before, so we’d agreed to drop her off at Phobrang on our way to Marsimik La.

We were quite surprised later to find out that she was really scared of the narrow winding roads! Hard to imagine a native of Ladakh being scared of such roads! We left for Marsimik by 8 am and reached Phobrang in about 45 minutes.

Our hosts at Spangmik​ 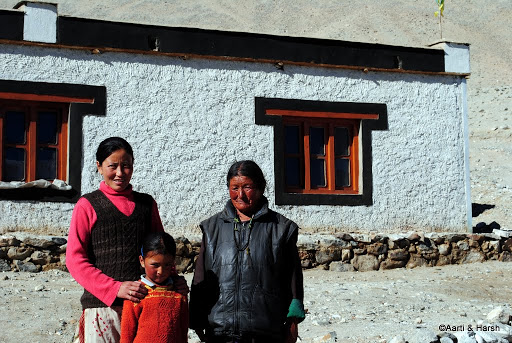 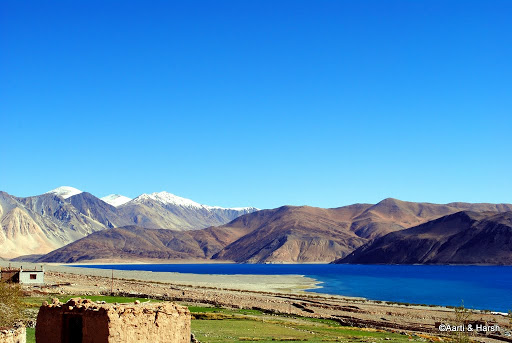 Customary shot of the entrance to Phobrang village​

We were almost certain of being denied our attempt to Marsimik La, having heard a lot of negative comments about the ITBP guys posted there. Soon enough, we crossed a camp, which seemed like a check-post.

Surprisingly, no one came out to stop us! I did not want us to be scolded again, so went to ask for directions to Marsimik La, and about the check-post. The guy there simply pointed out the road going towards M top and went back inside the check post. Err, excuse me, hello!

Wasn’t he supposed to check our permits! Not knowing what to do, we went on towards Marsimik, without having permits checked or depositing our camera.

Also Read: How to Plan a Trip to Pangong Lake

The Climb to Marsimik La

The climb began almost immediately after the check-post. After a little 4L action, we were soon atop the small climb. The road ahead had a relatively gentle gradient for the next 12 odd km.

At times Kiyang was doing speeds of up to 40 kmph! But the real danger for 4 wheelers was the danger of toppling over, since the path is quite angled, and one has to be careful in a vehicle with a high centre of gravity.

The real climb to Marsimik began soon thereafter. We must’ve done the last stretch of about 10 km almost entirely in 4L mode. We had to be extremely cautious and many times had to get down from the car to first gauge the path to be taken, carefully avoiding the big rocks waiting to scrape the under-carriage of Kiyang. There was also lots of loose sand to be taken care of to ensure that Kiyang did not lose traction on a 30-degree incline!

The final climb took us about 20 minutes to complete, and the scene ahead was disheartening. Right below the top, the snow had yet to melt and there was no way we would be able to make it to the pass in Kiyang. Nevertheless, we decided to move ahead and try to get as close as possible to the top.

Also Read: How to Plan a Trip to Hanle

Further up, we could see two Stallions parked, but not a soul in sight. We trudged on, only to find that it might not even be possible for us to reach those Stallions since there was a huge rock in the middle of the road waiting to rip apart the underbelly of our car, but not huge enough to trouble the Stallion.

The road was narrow because of snow on either side, and the only way to proceed was to take out our shovel and make way for Kiyang to proceed. The next 15 odd minutes were spent shoveling snow, and at an altitude of more than 5300 m, it’s not an easy task I tell you! It was quite a workout!

With the road cleared, we proceeded to cover the remaining 500 m and parked our car next to the Stallions. 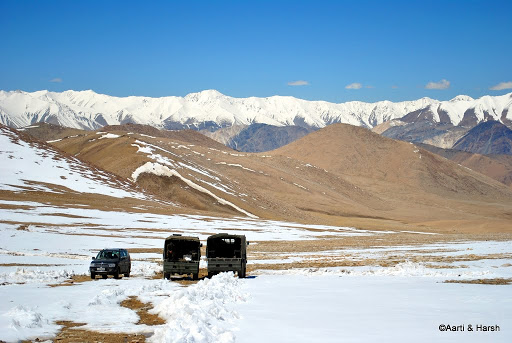 We went around to see if there was anyone inside the two Stallions and saw an Army jawan sleeping peacefully in one of them. It was a bit odd, to find two vehicles parked in the middle of nowhere and a guy sleeping soundly in it.

We were still looking at him when he suddenly woke up and was totally taken aback at the sight of two tourists (or should I say travelers) staring at him. He explained that he was waiting to pick up some soldiers who were on their way back from a post 60 km away from Marsimik. He suggested that we walk to the top and then come back for some tea.

So we began our trudge up to the pass. It seemed close, but we must’ve taken at least 45 minutes to climb to the top. At that altitude, the hike was quite difficult, with us having to stop every few minutes to catch our breath. Thank god that before the trip we’d both tried to increase our fitness level a bit.

Eventually, Marsimik La was conquered! The sad part was that it really did not offer amazing vistas as some of the other passes in Ladakh do. While we did some time pass, clicking stupid pictures of ourselves, the soldiers trekking from the other side too reached the top. The OiC was quite pissed off at the sight of tourists (again travelers) in the restricted area.

Soon enough we all started climbing down to our respective vehicles in the “parking lot”. The soldiers were kind enough to offer us some tea, juice, and biscuits. We then began our climb down. The descent I believe was more difficult than the ascent, and generally, I think it always is.

The trudge up to Marsimik​ 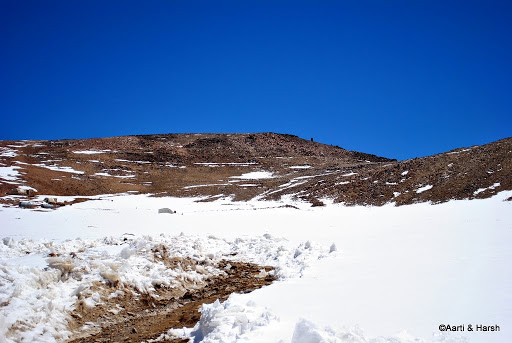 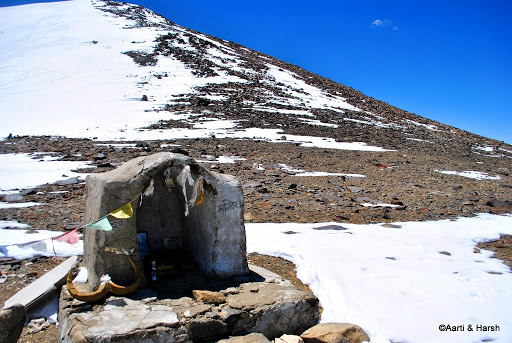 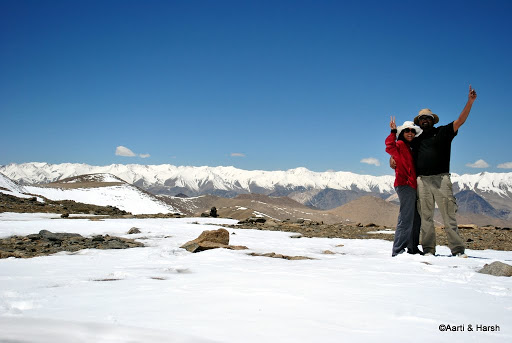 The trudge down with Army men​ 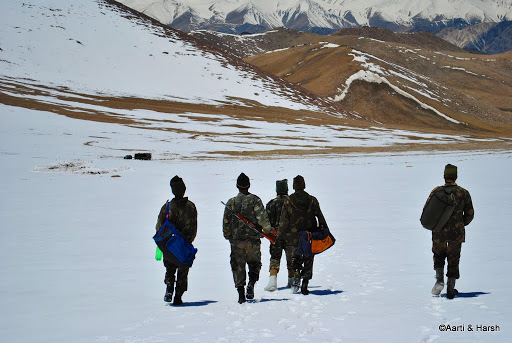 This snap, taken from my mobile, depicts more or less the descent/ascent at Marsimik​

The moment we reached Phobrang, the Jawan at the check-post hailed our vehicle signaling us to stop. He informed us that the OiC at the post wanted to have a couple of words with us. We complied and followed the Jawan inside. The OiC, upon seeing us, started scolding us for not getting our permits checked before proceeding towards Marsimik La.

It took us some time to explain to him the whole situation that we actually had asked the Jawan to check our permits before proceeding ahead, but he did not stop us, and instead signaled us to move ahead. The Jawan in question was called and questioned on his reasons to do so.

His reply was in fact quite amusing! He assumed that I was a GREF officer asking for directions towards Marsimik La. The reason he assumed so was the color (khaki) of the hat I was wearing, and also because we dropped off an old lady at the village. A similar confusion happened when we were climbing Khardung La! Anyway, things were sorted out soon, and we proceeded towards Lukung for lunch.

Also Read: How to Obtain Inner Line Permit for Ladakh

The plan for the next day had not been decided yet. We had managed to use up all of the 80 liters of diesel we were carrying and our calculations showed that we would not be able to do Pangong-Shayok-Nubra-Turtuk-Leh with the amount of diesel we had left.

The only way that route could be done was if we managed to get an additional 25 liters of diesel from somewhere. We had asked the OiC at Phobrang but he had declined, saying that he himself did not have too much. But this time lady luck smiled on us and we were able to arrange for 40 liters at one of the tents at Lukung.

Thus it was decided that we skip Changla and take the direct route towards Nubra via Shyok.

After a quick lunch at the Army cafe at Lukung, we set off for Tangtse where we’d planned to stay the night. Somehow the days’ drive had been exhausting despite the small distance covered, and all we wanted was to check into a hotel and rest. I had my eyes shut when Aarti brought Kiyang to a screeching halt and hurriedly began switching from the normal lens to the zoom lens.

She had spotted another marmot by the side of the road and was trying her best to capture it on camera before it ran off, as all marmots do when they see humans. But this marmot was different, it was actually coming closer to us! We got really excited and started clicking like crazy. We had never seen a marmot so near to us. It was wonderful to observe the cute creature up close.

Also Read: How to Plan a Trip to Nubra Valley

We had a packet of 50-50 biscuits with us and threw a couple of them his way. Instead of running away, it started to come closer and before long was eating those biscuits. The little guy was quite enterprising and gave us at least half an hour of close-up shooting time. Eventually, it ran away after finishing off the entire packet of biscuits.

This board had us in splits!​ 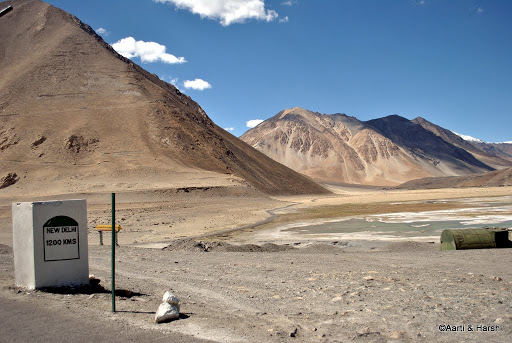 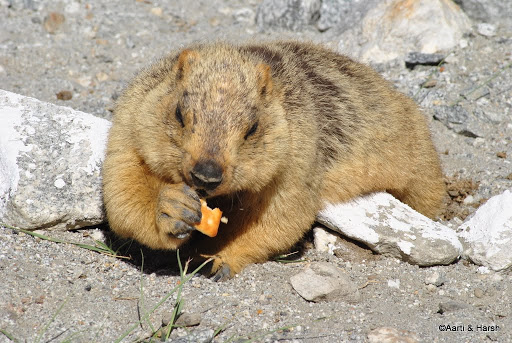 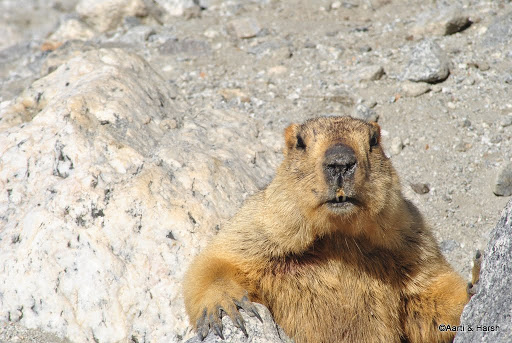 We carried on towards Tangtse, satisfied with the photo session. We checked in to a hotel at about 4 pm, the earliest end to a day so far on our trip.

The next day would be about the discovery of a new route from Shyok to Nubra. This route has improvised tons in recent years but back when we did it the first time, it was no less than an adventure in itself.

I hope the travelogue, pictures, and information above on traveling to Marsimik La Pass were of help. Please click on the link above to continue reading the next part of this travelogue. If you have any questions or need any other details, please feel free to ask in the Comments Section below or at our Community Forum, and I will be glad to answer.

Are there any special permit needed for Marsimek La? If yes, how to get them. We are to visit in the month of June.

Your regular ILP should do.

Excellent write up with brilliant set of images.
Can one visit Phobrang with an ILP for Pangong Tso ? If not, is there any way to get a permit for the same ?

Yes you can go