Manali to Delhi by Bike – The Long Ride Home

This post is in continuation with a previous one and a part of my Ladakh bike trip travelogue. We reached Ladakh from Delhi, explored the region, and returned to Manali after 8 days. We reach Manali from Pang on Day 9 and travel from Manali to Delhi by Bike on Day 10. Please click on the links below to read the previous parts of the travelogue.

The 10th day of the trip was going to be a long and tiring day. The last day of the trip is anyways the most boring one when you are returning home. If the home is 530 km away on a motorcycle, it would tire you even before you started.

The same thing happened to us. We were already feeling sleepy and bored the moment we left Manali but had to take this journey nonetheless.

We had planned to start a little early in the morning to reach home in time. But by the time we actually started, it was well past 8 AM. I think the biggest reason behind that was that we were all pretty tired by now. We had been riding non-stop for 9 days and the idea of riding another 530 kilometers wasn’t really encouraging.

After a hearty breakfast in Manali, the ride started. We rode for about an hour and then stopped for a break somewhere in between. 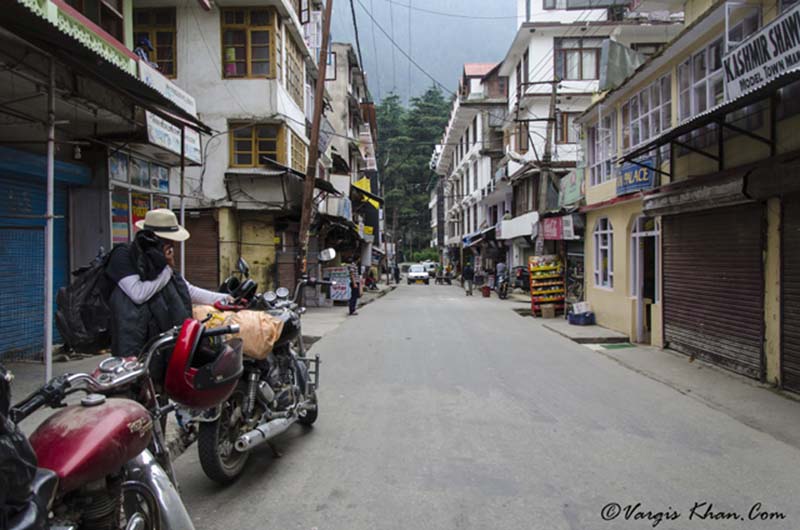 A little before Sundernagar, I got this weird idea to take a diversion towards Tattapani and reach Shimla today. From Shimla we could go home tomorrow, thus extending the trip by one day.

Others were not too excited about the idea. They did not want to prolong the painful journey home by another day. For a while, I decided to let them go and continue to Shimla alone. But by the time we hit Sundernagar, I too just wanted to go home.

Near Chandigarh, we got separated. I took the bypass through Berut while the other three continue to ride through Chandigarh. We all met again near Karnal and then an incident happened which has had its effect on my mind till date.

I was riding ahead with Rohit while Sunny and Shoaib were following a little behind. All of a sudden, I noticed that the vehicles ahead of us were taking a sharp turn as if trying to avoid something on the road.

It was midnight and was dark all around on NH1 except for the headlights of the vehicles. The truck in front of us did the same. My first thought was that there must be a pothole on the road but I was wrong.

When we crossed him, I saw pieces of glass scattered around him but no blood. Probably he was hit by a car and the driver didn’t bother to stop. We applied brakes immediately and stopped a few meters ahead.

“Was that a guy lying on the road?” I asked Rohit to confirm. I could not believe my eyes that a man was lying in the middle of the road, unattended like a dog.

Sunny and Shoaib arrived a minute later and they too had the same question, not able to believe what they just saw. We parked our motorcycles, got off, and were about to head back but it was too late.

All we saw the moment we turned around was a speeding truck ran over the guy. The driver of the truck did apply the brakes and stopped but It was already too late. His front wheels had already crushed the guy.

We knew that what lies on the road isn’t something that either of us would want to go and see. A police jeep arrived minutes later. Cars stopped and people started to gather as we looked from a distance.

After a while, we got on our motorcycles again and continued towards Delhi. One thing that I knew for sure however was that there was no blood on the road when we crossed on that guy. So there was a very high chance that he was still alive until the truck ran him over.

By 2 AM, we were all comfortably home ending our ride from Manali to Delhi by Bike. But I could not take my mind off what I saw and kept thinking about who actually killed the guy.

He probably was some villager who got drunk and was trying to cross the road late at night and got hit by a car. I wondered who really killed him. Was it the alcohol or his carelessness? Was it the car who hit him and didn’t stop?

Is it really the fault of the trucker who ran over him? Did he kill him? Was it all those people who saw a guy lying in the middle of the road but just avoided him like a dog, rather than stopping to check?

Or was it us? We did stop but wasted those precious seconds discussing what we saw. If we had acted in nick of time, we could have saved him from a horrible death. To date, I wonder, who really killed that guy?

Manali to Delhi by Bike – Conclusion

And thus ended an eventful trip. I have been to Ladakh numerous times, both before and after this trip but this one by far was the most exciting and eventful one.

We crossed 18 High altitude passes, sat by 11 High altitude lakes, had several breakdowns, witnessed a bandh and a Chakka Jam, got almost manhandled by a mod, were threatened by cops, chased and almost attacked by dogs, got lost, rode in pitch black in the middle of the night and in the middle of nowhere, could not find accommodation and had to sleep on the floor once. All this back then sounded like trouble but now when I think about it, it was a journey of a lifetime.

I hope the travelogue, pictures, and information on a bike trip to Ladakh were of help. If you have any questions, please feel free to ask in the comments section below or at our Community Forum, and I will be glad to answer.

It’s really painful to see an accident and injured/dead people on the road. It’s very difficult to let go the sight and all sort of thoughts that accompany it.

It’s no secret how dangerous our roads are and everyone is responsible for it. From a driver to a person who crosses a high speed road. On road, whether driving, riding or walking we expect the other person to are for our safety. We forget that we are responsible not only for ‘our own’ safety but also of the fellow road users.

Added to this is our insensitive nature that stops us from helping the victim. May be it’s result of why should I care attitude or fear of being hounded by authorities.

May GOD ALMIGHTY drive some sense in us.

I completely agree. We walk and drive like crazy and expect the other person to avoid any mishap. It has been several years now but the incident I described above still haunts me sometimes.