Tso Moriri to Tso Kar to Pang – Across More Plains

This article is in continuation with a previous one and a part of my Ladakh bike trip log. On Day 6 of our trip, we reached Pangong Lake and continued to Tso Moriri from there the next day. On Day 7, we traveled from Tso Moriri to Tso Kar and Pang, details of which are covered in the post below.

Night at Karzok was as long and difficult as the day to get there was. Even though we were completely exhausted by the time we hit our beds, I could barely sleep. My entire night was spent tossing and tumbling under the blanket.

The biggest reason behind this was that we all just had one blanket each to cover ourselves with. It was barely enough to keep the cold out. To make matters worse, I slept right next to a window that had a small crack somewhere between the panes, allowing the cold air inside.

I kept sleeping and waking up all night, trying to keep myself warm and get some rest but in vain. Finally, I gave up in the morning at 7 AM and stepped out.

Right in front of me was the beautiful sight that we missed the night before; because we arrived here after dark. The beautiful Tso Moriri, our 8th high altitude lake of the trip. 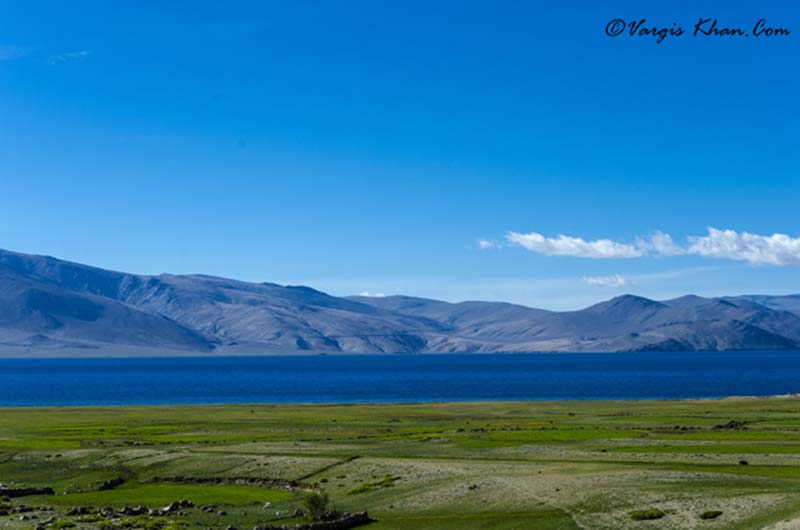 After walking by the lake for a while and clicking some shots, I headed back. On the way, I had a cup of tea at the tea stall and stepped in to find others still asleep.

Considering the fact that I had so much trouble sleeping, I couldn’t help but envy these guys for how like babies they were sleeping. Right next to the window is where I spent my night restlessly. 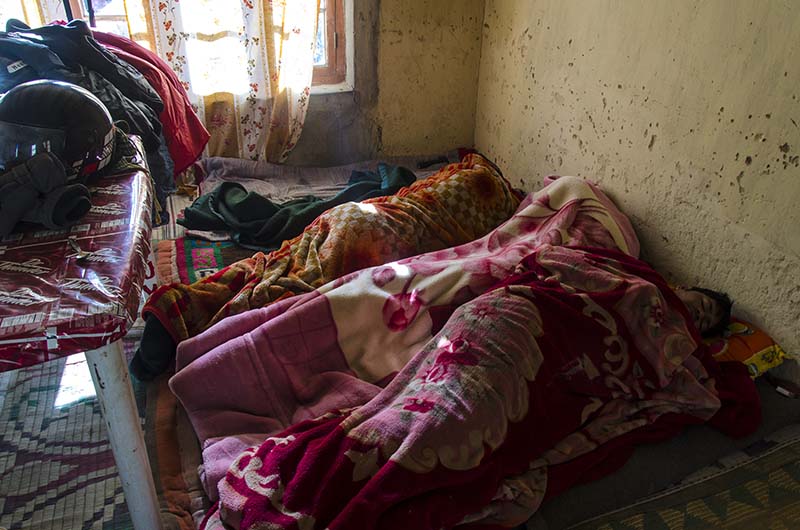 After a while we were all awake and got to the first most important task of the day, fixing the flat wheel on my Enfield. There was no mechanic around so we had to take care of it ourselves. 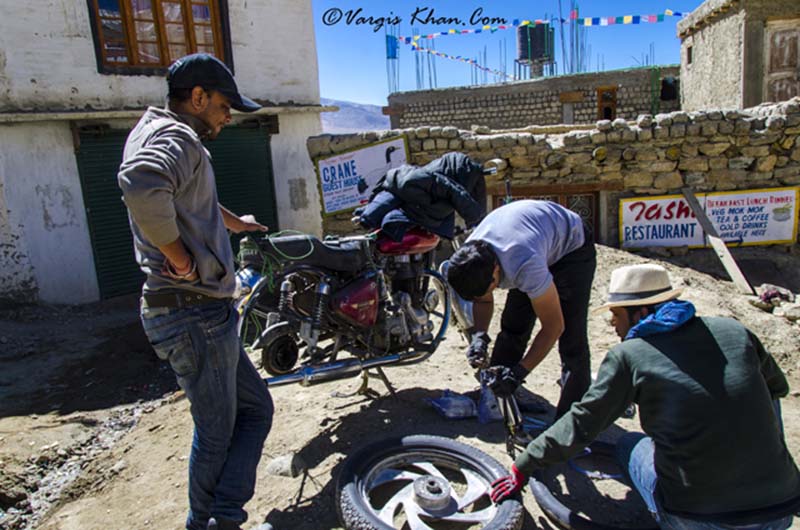 For a moment I thought of spending a day in Karzok, considering all the trouble we went through to get here. But surprisingly, none of the hotels or camping sites could accommodate us even today.

There was just no vacancy anywhere at Karzok. Disappointed, we packed our luggage, had breakfast, and were ready to be on our way by 10 in the morning. But before that, we attended the festival at the monastery. 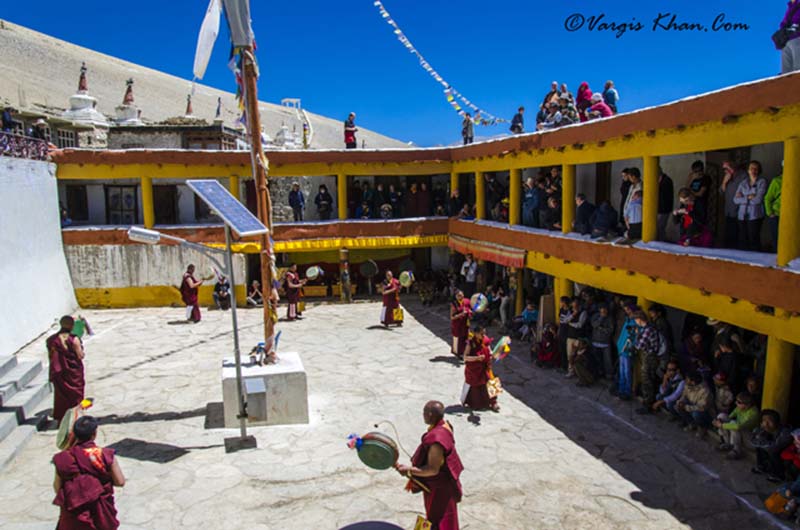 After watching the festival and prayers for a while, It was time to travel 55 kms back to Sumdo from where we were to continue towards Pang.

This is where we were supposed to go straight last night but instead turned left and went 40 kms in the wrong direction, towards Chumur. 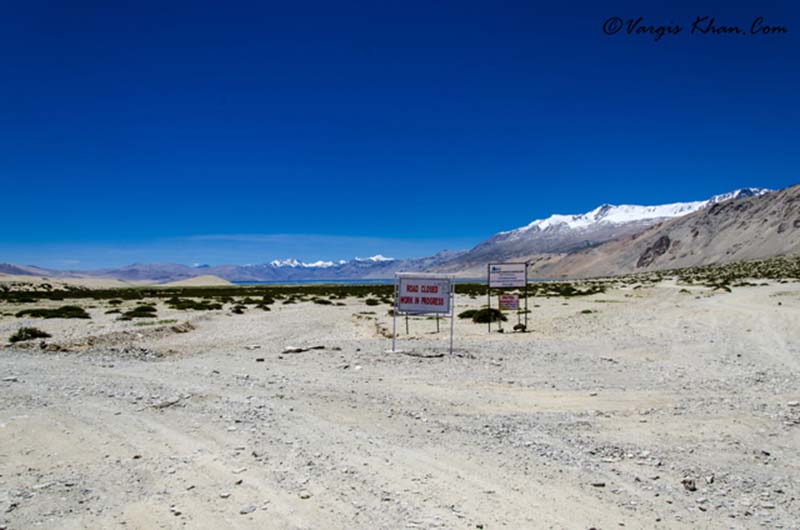 Then came our 9th high altitude lake, the beautiful Kiagar Tso. We crossed it last night as well but didn’t see it in the dark. 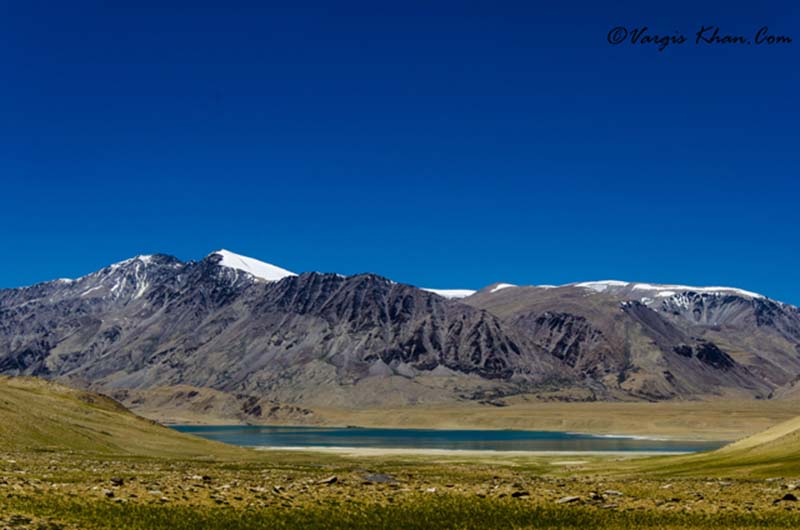 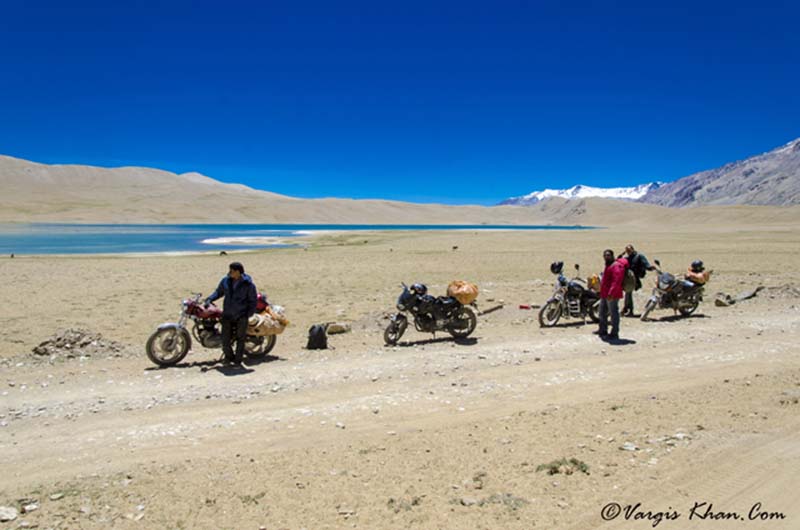 After a while, we were again standing on top of Namashang La, for a 2nd time. This time it was our 13th high altitude pass. 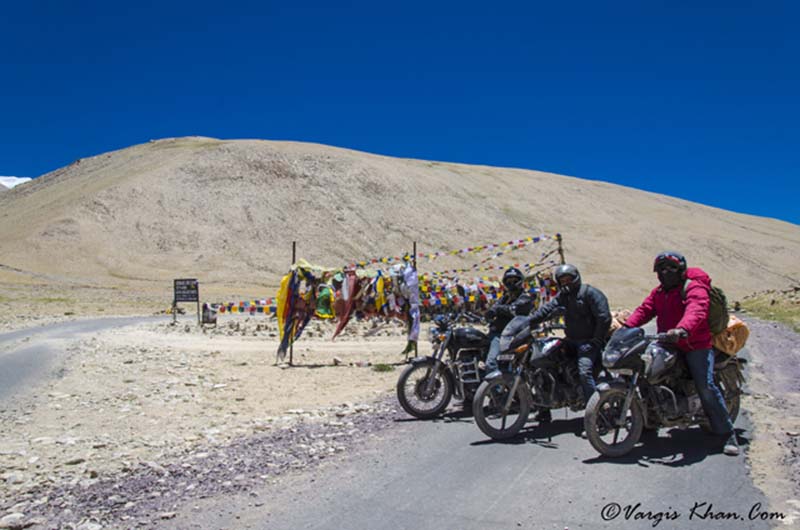 We reached back at the same tea shop in Sumdo where we had the tea last evening. For a moment, I thought to give an earful to the tea stall owner; to not tell anyone else that the road till Karzok was awesome as he told us.

But then I just decided to keep mum. He asked us about last night and we only told him that it was OK and we made it in time. For this, he couldn’t resist patting himself on the back saying, “Didn’t I tell you?”

After a few cups of tea, just when we started to get ready to leave came our 9th breakdown of the journey.

We did what we could at that moment. Somehow we managed to wrap the electric wires on the battery points. Then we get a small piece of rope and tied the battery and the cover in one place. With this arrangement done, we continued the journey and turned towards Puga from Sumdo.

The road again turned into a dirt track the moment we crossed the village of Puga.

After 15 kms and we were standing on top of Polo Kongka La, our 14th high altitude pass. 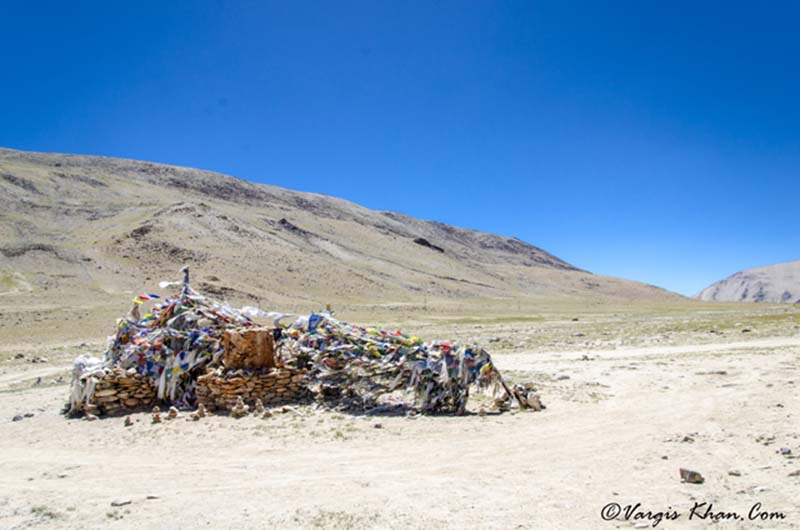 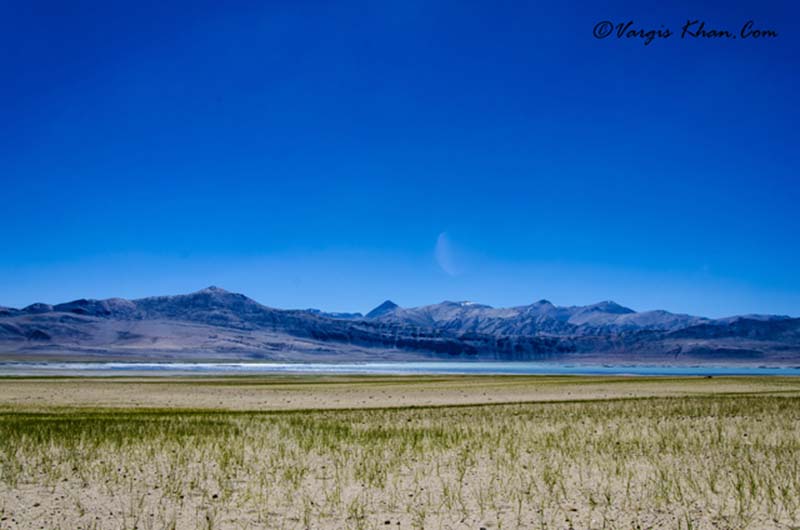 A little ahead was Tso Kar, our 11th high-altitude lake. 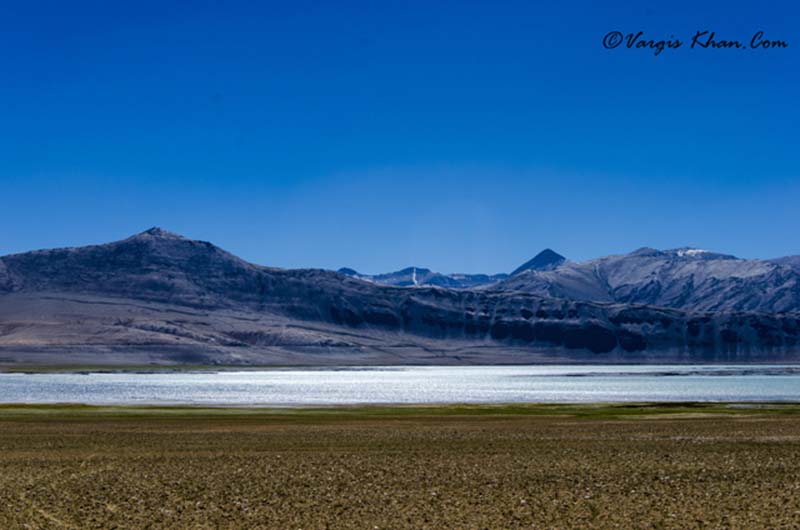 Little after Tso Kar, I came across a Royal Enfield parked on the side of the road with no one in sight. What surprised me the most was the only luggage on the motorcycle and two full 10 liters cans of petrol.

I could not see anyone around at all except for the four of us. For a moment I thought to pause and check if someone was in trouble or in need of help, in case the motorcycle had broken down. But then I changed my mind thinking that the owner must have stopped here to click photos of Tso Kar.

A little ahead, I saw an elderly foreign lady walking alongside the road. I slowed down a bit, thinking that the motorcycle could be hers, but she did not waive for me to stop or help so I kept going.

After continuing for a while, I found Shoaib talking to a foreigner, a french guy. It turned out that the motorcycle was his, and it broke down so the guy was walking towards the few dhabas near Tso Kar looking for help. He also told us that he had been standing there since morning. I agreed to take a look and rode back to the parked motorcycle.

On the way, I noticed a group of motorcyclists at a camping site and it seemed they had a mechanic with them as well. We reached the spot where the french guy had left his motorcycle. After spending 15-20 minutes with his Enfield, I was unable to find out what was wrong with it.

I asked Shoaib to ride back to where that group was staying and see if they can help since they had a mechanic with them. Fortunately, they agreed. Within 15 minutes Shoaib arrived back with a mechanic. Soon the motorcycle was fixed and we sent the french guy on his way. What happened before and after this was somewhat interesting.

The mechanic wanted to charge the french guy for fixing the Enfield. I told the same to the French who could barely speak English. In return, he took out his wallet and showed me that he didn’t even have a penny on him.

What he told us was that all his luggage was with his group and he got left behind. This sounded a little odd that why the group would leave him behind and not turn back to find out what happened.

I thought maybe he was in a hurry to catch up with his group but was proven wrong. We stopped at a dhaba near Tso Kar, just a little ahead of where the broken-down motorcycle was. The owner of that Dhaba told us that the french guy had been sitting there since morning, eating, sipping down tea, and smoking.

After we got his motorcycle fixed, he sped off without paying a penny to the dhaba owner.

We entered More plains and headed towards the Manali Leh highway which was roughly around 22 kms from Tso Kar. The other three were again riding ahead of me because of my frequent photography breaks.

I also had to ride a little slow because I was only managing the wheel with one hand. My left hand was continuously holding the battery cover as the road was a lot bumpy and I was afraid that the battery may come off again.

Somewhere along the road, a little ahead, I noticed what seemed like a couple of dogs running towards the road from a distance. From the looks it of, It was pretty clear that they were approaching the three guys riding ahead of me.

Distance must have been at least a kilometer but in Moore plains, you can see the straight road ahead for several kilometers.

This is where it happened. 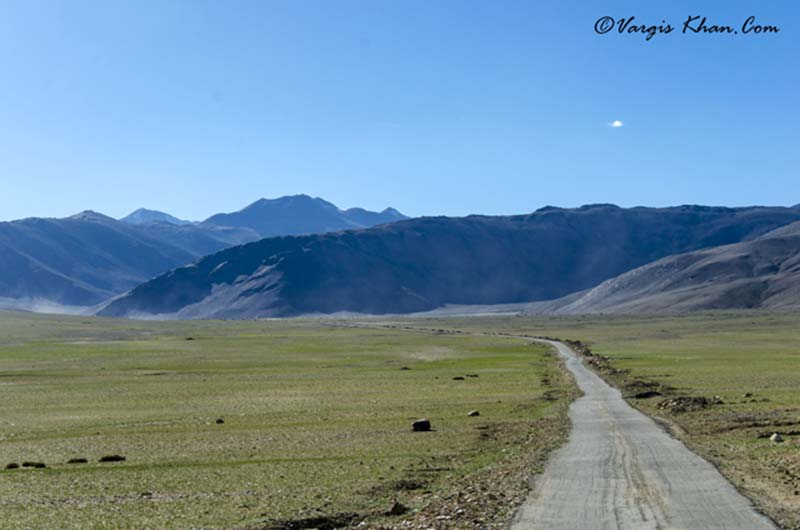 Considering the distance, I was pretty sure that the dogs would not be able to make it to the road to catch up with my friends. But it also meant that they will then target me who was riding alone a kilometer behind.

To make matters worse, the road was a lot bumpy. I was managing the wheel with one hand, and my battery could come off with a slight jerk which meant that I could not speed up.

Fearing the worst, I increased my speed to whatever I could manage and started to get ready mentally to encounter the dogs. Thankfully, I was worrying in vain. The dogs just kept running, reached the road, crossed it, and continued to run on the other side.

Either they were chasing something or were being chased by something. Whatever it was, I was just thankful that they had no interest in us.

Breathing a sigh of relief, I slowed down and soon we reached the Manali Leh Highway. 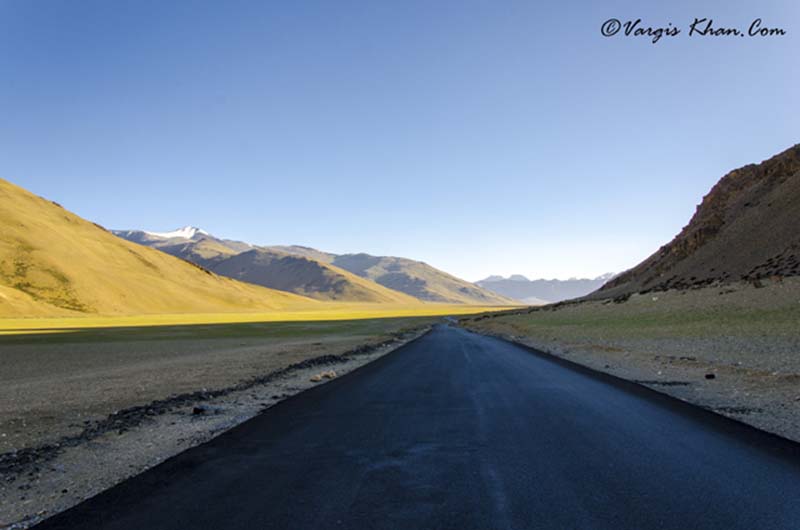 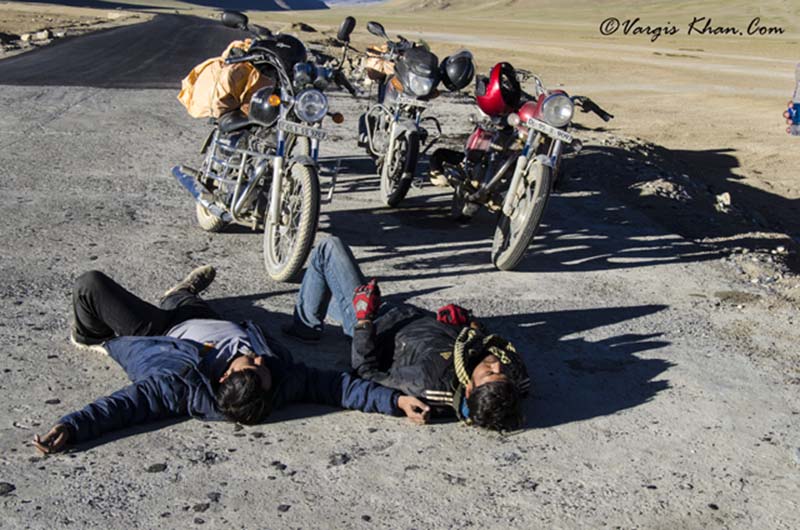 We reached Pang and checked into the same camp that we stayed at last week while on our way to Leh. This time there were a few other guests as well, a group of guys from Mizoram.

The amazing part was that they traveled all the way from Mizoram to Leh on their Enfields. I couldn’t help but envy them for the awesome journey.

The night sky from Pang. 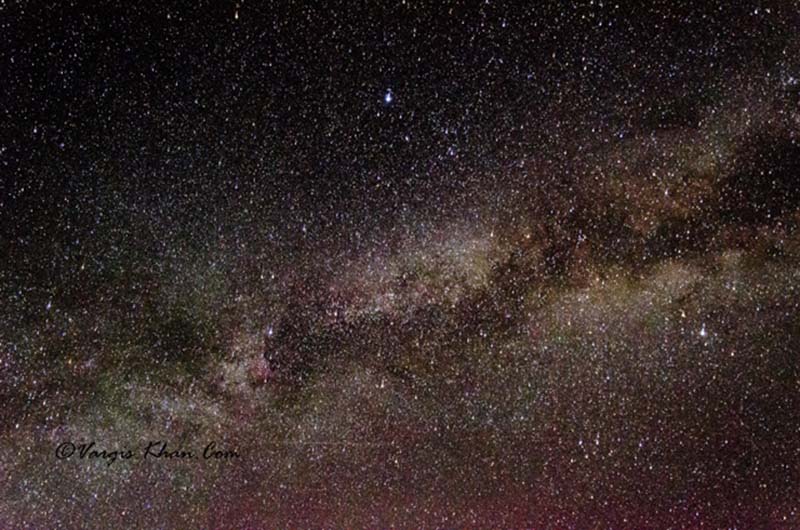 Considering that we had traveled long distances on bad roads in the last couple of days, we agreed to continue the trend and head straight to Manali from Pang.

With that decision made, we decided to get up early and hit our respective beds after a delicious dinner. 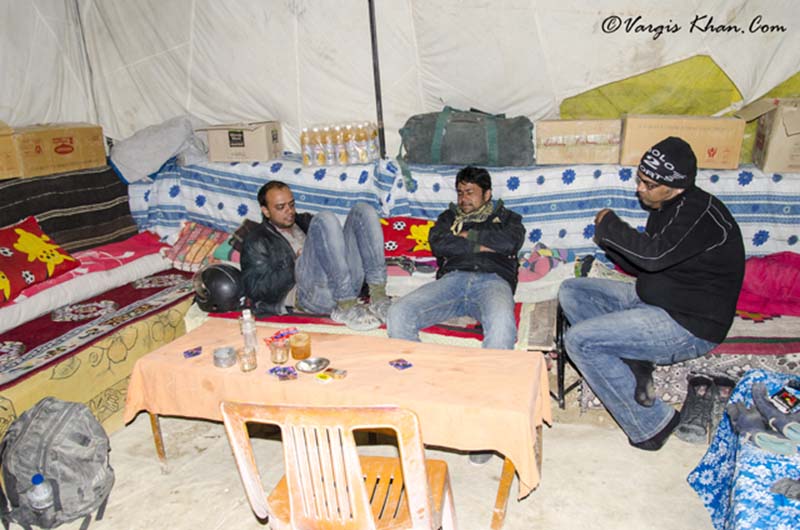 And this ended about 7 hours of riding through the beautiful terrain of Ladakh, witnessing the beauty of Tso Moriri, Kiagar Tso, Starstruck Tso, and Tso Kar. After the troublesome day of reaching Tso Moriri from Pangong, we were just thankful that this day was all event-less; and we could just focus on enjoying the scenic beauty all around us.

Journey Ahead: Day 9 – Pang to Manali

The total distance between Tso Moriri and Pang via Polo Kongka La and Tso Kar is approximately 143 kilometers. The road is a mix of good, bad and ugly.

The ugly part is mostly between Sumdo and Karzok and around Polo Kongka La. Though the distance is not that great, this journey will easily take you about 6-7 hours due to a bad section of roads. There will also be frequent breaks that you are bound to take, thanks to the beautiful vistas on the route.

Please click on the link above to read the next part of this travelogue.

I hope the travelogue, pictures, and information on traveling from Tso Moriri to Tso Kar to Pang were of help. If you have any questions, please feel free to ask in the comments section below or at our Community Forum, and I will be happy to answer.