Like previous years, this will remain to be a dedicated post to share updates on Manali Kaza road status in the year 2021. As the winter season progresses and ends, I will share the word on the opening and closing of the road. Other than this post, I will also be running a thread in the Community Forum to share the most recent pictures of the route.

I cannot post too many pictures here on this page because it will otherwise get too heavy. If you just want to know the Manali to Kaza road status today, then scroll through this page and you will get the required information. However, if you would like to see a more visual presentation of Manali to Kaza road condition today, then I will urge you to please take a look at the forum post.

The current road status from Kaza to Manali as of today is OPEN. The snow has been cleared from both Rohtang and Kunzum Pass and locals are traveling across both the passes. If you do not wish to cross Rohtang Pass, you can also take the newly opened alternate route via Atal Tunnel to Keylong and Jispa, and then reach Kaza via Gramphu Batal road.

Sharing a recent picture of Kunzum Pass that was clicked last week by a friend who managed to trek all the way to the top. You can see the amount of snow accumulated and how the Kunzum Stupa is buried deep under. 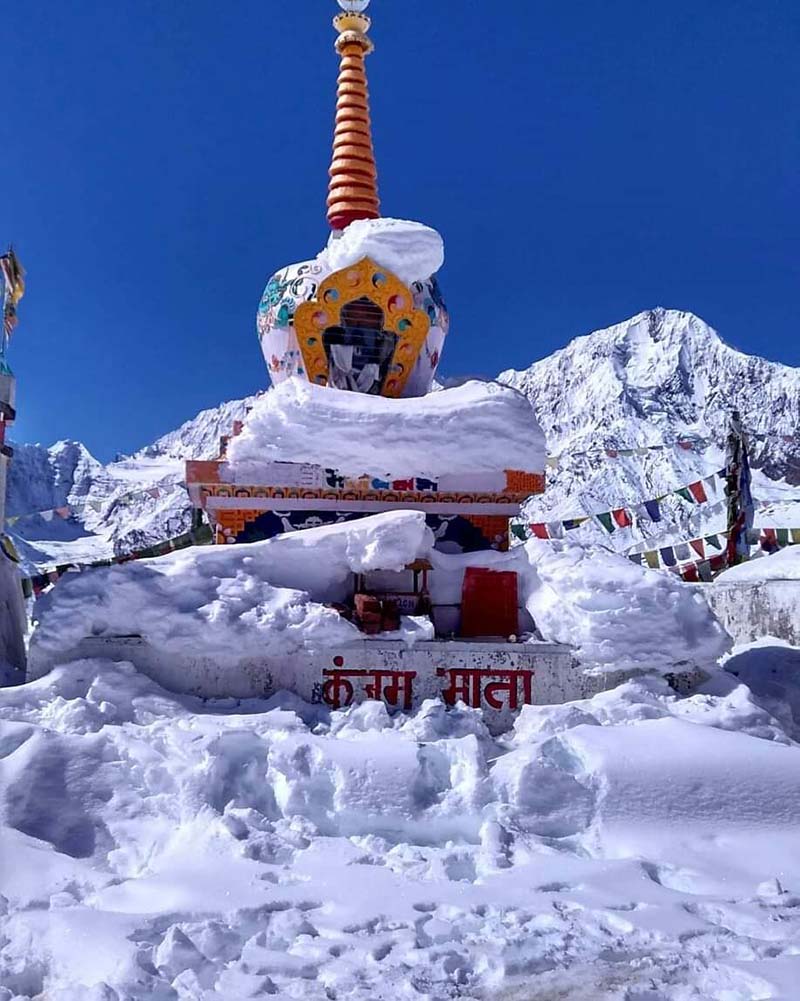 Sharing a few pictures of the road between Kaza, Losar, and the nearby villages. By this, you can imagine the amount of snow on the road after Losar.

There is a lot of snow on the road and more is on its way in the coming months. There is a significant amount of snowfall this year in the entire Himalayan region. By the looks of it, it does not seem likely that Manali Kaza road will open any before than late May. This however may change in the coming weeks depending on the weather. 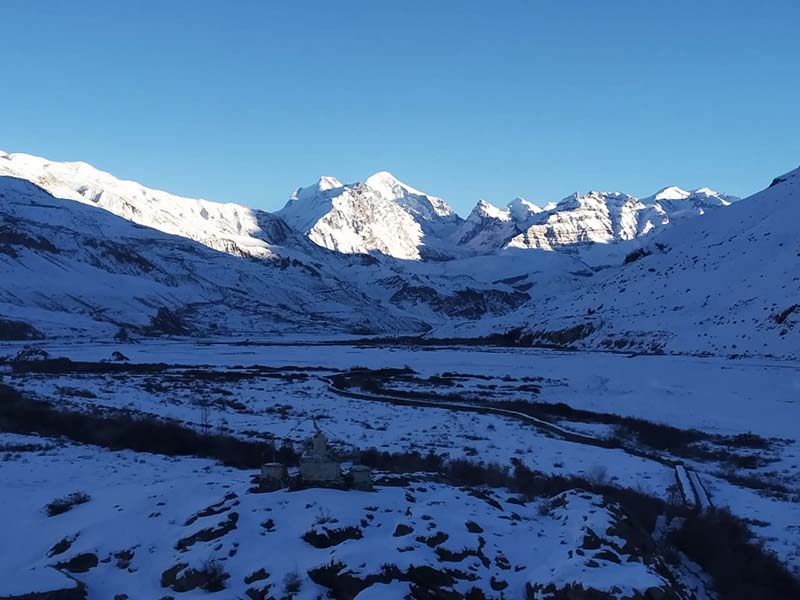 As a tourist, consider the road to be closed for this year. I would strongly advise against risking a journey on this stretch now. Blizzards and sudden heavy snowfall in this area are way too common. Do not forget that you will also be crossing two high altitude passes to get out and if that did not happen, you will be stuck for good.

There have been instances when tourists were caught in blizzards at places like Batal and Chhota Dhara and had to be airlifted out. And yes, there have been casualties as well so do not take the risk.

How to Plan a Trip from Manali to Spiti Valley

Knowing the road status of Kaza to Manali is definitely not sufficient for a trip on one of the most adventurous routes of our country. There are several things that you must have knowledge of and be prepared for. Listed below are some of the articles that I have written and would urge you to read so that you have a better knowledge of the route that you are about to be traveling on.

The status of the road from Shimla to Kaza is currently open, and it will continue to remain so unless the weather turned extreme and blocked the road anywhere along the route. However, even if that happens; the authorities clear the road just as soon as they are able to and restore connectivity. So yes, starting from Shimla, you can actually travel to Kaza throughout the year.

The status of Kunzum Pass as of today is closed and the road. The estimated date of the opening of the road will be late May to early June in the year 2021.

I hope the information above on Manali Kaza Road Status was of help. If you have any questions; or need any other details; please feel free to ask in the comments section below, or at our Community Forum, and I will be glad to answer.

Ladakh vs Spiti – Which is Better Ladakh...

Hi! Any idea whether rohtang pass and kunzum pass are open for June 2021. I am planning to visit next week. Do you have any contact details from where I can get the details ?

Will the kaza Manali road be open in the last week of April ?

It was opened but then closed recently because of snowfall. It depends on the weather right now.

Is Spiti still in quarantine or will we be able to visit it this year towards the end of may/early june?

I really appreciate the knowledge you have about Himalayas and the way you help and guide others. Its a tremendous effort you do. Kudos.

We are a group of 7 Drs travelling to Kaza via Shimla and leaving back from KAZA ON MAY 9th to reach CHANDIGARH via Shimla.
Can we expect a clear passage via KUNZUM PASS by may 9th so as to complete the circle and return via Manali. In that case we’ll have to make certain alterations in our itinerary and changes in bookings as i have already done all bookings.

If not possible to say definitely now how early can we be sure about the status of opening of KUNJUM PASS.

What is the status of kunzum la? Is it open for vehicular traffic?

It’s a nice post. Can you please let me know the rad condition from rohtang pass to kaza and chandratal As i have a plan on June or September and Still not decided when It should be. I am reading some blogs and as stated, the roads are non existent and after rain, it was too risky. Please clarify if possible in detail

hello am I am planning a trip around second week of June ,do you think the pass will open by then

Hey! Would kaza to Manali Road be open by June 13th? Also cam we travel to chandratal lake on June 12th?

Yes you can. It will be open