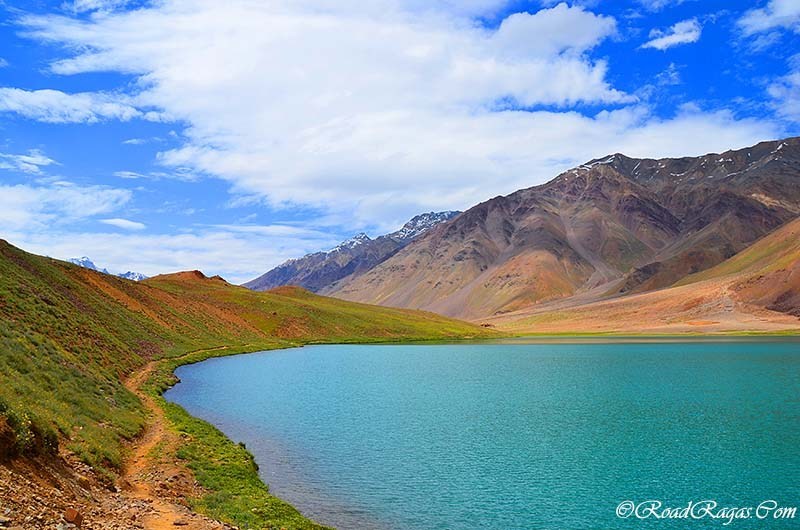 For anyone who plans a visit to the mystic valleys of Lahaul and Spiti, a night stay at the beautiful Chandratal Lake is always part of the itinerary. It is a beautiful lake indeed, about a kilometer long and half a kilometer wide. But there are several interesting things about it that not many people are aware of.

Chandratal, literally meaning lake of the moon, is believed to be named so due to its crescent shape. Its water source however is not the only mystifying fact about this lake. There is also a beautiful tale of two lovers who decided to meet at the Baralacha Pass and merged into each other to remain one forever.

Chandratal Lake is the origin point and source of river Chandra, which is one of the two tributaries of River Chenab. The river originates from a glacier on the south-eastern side of the Baralacha La Pass.

These small streams of water flow down in the direction of Kunzum pass and form Chandratal in a broad slush plain amidst the peaks of the Kunzum range.

Chandra River flows for an extensive distance along the road from Batal to Gramphoo and then the Manali-Leh highway in southeastern direction. It then turns completely and takes a southwestern course after merging with the Bhaga River at Tandi.

With numbers of glaciers on its side, biggest being the Shingri on its left, and Samundari on its right, the river outlet from the lake is fed by numerous water streams until its confluence with Bhaga River.

Even after Batal, several streams flowing down from Sonapani glacier near Khoksar; and Sissu glacier near the village of Sissu keep merging into the water outlet from Chandratal; thus turning it into a river of large size with a fierce flow of water.

Bhaga on the other hand originates from Suraj Taal, another small lake located at the top of Baralacha La Pass. Suraj Taal is the third highest lake in India and 21st highest in the world. The water outlet from Suraj Taal forms the Bhaga River.

Together these two small rivers, Chandra and Bhaga, form the major Chandrabhaga River which is also known as River Chenab.

Tale of the Two Lovers

Legend has it that Chandra was the beloved daughter of the moon and Bhaga was the only son of Suryadev, the Sun god. Both of them once ran into each other at Baralacha La and it was love at first sight.

Their love however was not approved by their parents and they were not allowed to marry each other. Sun god wanted to entrust his son the task of bringing light to the world in the form of days. The Moon god wanted to assign the job of lighting the nights in the world to his daughter Chandra.

This disapproval of their parents broke the hearts of the two young lovers but they were not so easily defeated. Together they both decided to elope, meet at Baralacha Pass again where they had first met, and perform their eternal marriage without their parent’s consent.

They both came down to the agreed spot but Chandra reached a little ahead of time than Bhaga. When she didn’t find Bhaga at Baralacha La, she wandered off in search of him towards Kunzum Pass and then started to circle back to Baralacha La again.

Just when she reached Tandi, she saw Bhaga coming down from the opposite direction looking for her. They both consequently met and the celestial marriage was performed.

The route that Chandra took from Baralacha La Pass to Chandra Taal is today present in form of a trek route that several trekking enthusiasts follow. Her route from Kunzum Pass back towards Baralacha La is where the river flows in the present days.

Chandratal is believed to be named after Chandra and Suraj Taal after Bhaga, him being the son of Sun God. 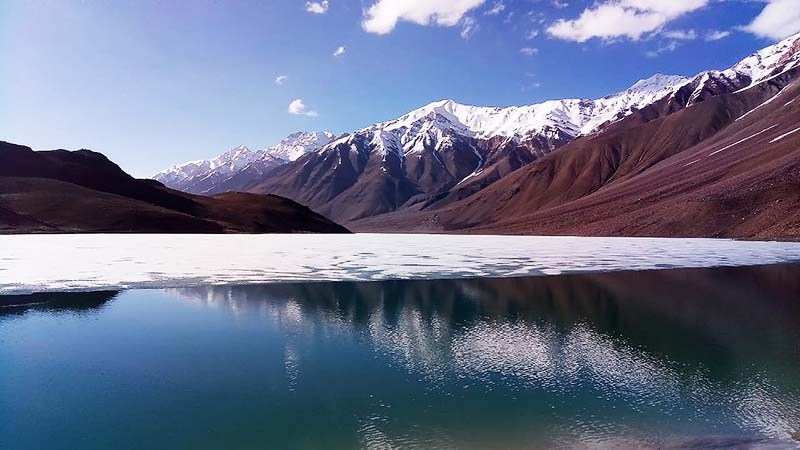 But that is not the only story you will hear about Chandratal. There are in fact a couple of others. The second story is also a love story.

The locals believe the Chandratal Lake to be blessed, and visited by fairies at night. One such tale is of a shepherd from a local village called Hansa who used to come to the lake to graze his cattle.

On one such occasion, he noticed a fairy, and they both immediately fell in love. Legend has it that the shepherd was already married but he did not disclose it to the fairy, fearing that she may leave him if she found out.

For years, their love blossomed. They both will meet at the lake and spend time together. On one such occasion, he accidentally disclosed to the fairy that he was married and his worst fear came true. That was the last time he saw her. The fairy never returned and the shepherd drove himself crazy waiting for her; eventually dying by the lake.

It is said that if you visit the lake at night, you can still find the spirit of the shepherd walking by the banks, calling out, and waiting for his long lost love.

A third belief is related to the final journey made by the 5 Pandava brothers; after they defeated the Kauravas in the battle of Mahabharatha at Kurukshetra. It is said that at the end of the great battle, as Pandavas started to walk towards heaven, they all died on the way one by one. Only Yudhishthir survived and he was picked up by God Indra at the spot where Chandratal is.

Interestingly enough, the same story also attributes Swargrohini in Uttarakhand to be the spot where Yudhishthir finally reached the gates of heaven with his pet dog.

The Legend of Chandratal Lake – Conclusion

So is the legend of Chandra Taal, the beautiful lake, tiny in size but a giant in beauty. If you are planning a trip in the near future; and thinking about where to visit, I will highly recommend going to Chandratal and staying there for the night at a campsite. For more details, you can read How to Plan a Trip to Chandratal. This is one trip that will be among the best of your life; memories of which you will cherish for years to come.

[…] The path that Chandra walked on is the route that the route of Bhaga river in the present days. The route taken by Chandara is the one where Chandra River flows. The spot where they met is the confluence point of these rivers. For more details on this story, take a look at The Legend of Chandratal. […]

[…] Just when she reached Tandi, she saw Bhaga coming down from the opposite direction looking for her. They both consequently met and the celestial marriage was performed. The spot where they met is the one where Chandra and Bhaga Rivers merge into each other. To read about this story in details, please take a look at The Legend of Suraj and Chandra Taal. […]

Hi
All your write ups regarding Spiti valley tour are very useful. … We are planning one on the 2nd week of June (around 12th to be specific) including Chandrataal… Please let me know if Kunzum pass will open by that time.
Thank you!

Thank you … and yes, it will be open by June.

Hi vargis, I am planning to go chandertal on 15th September with my friends. We have booked a taxi for our journey from manali.. But I want to know that…. is it a suitable weather to travel therein the month of September

Hi Shelja – You can go but it will be very cold at Chandratal at this time so please pack accordingly.

Ok and thnq for the suggestion 🙂

sir,
i Vargis bhai
i am planning a trip from kasol to Chandra Taal lake needed a advice for geeting bike in rent from kasol..
and with luggage is it easy to travel 2 person on one bike..

Bhai I do not know anyone who gives out bikes on rent in Kasol but I have a contact in Manali if you would like me to give you that.

I am planning a trip to Chandrataal from Manali / Shimla on 10th July. Need your advice on two things – how likely is it that rains will play a spoilsport in the journey?
Secondly is it advisable to travel with your parents here? My parents are 60+, with no respiratory problems. How many kms of trekking is needed to reach the lake?

Thanks in advance..
Kapil

It is highly unlikely to rain before July 15th Bhai but these days you can never tell anything for sure, thanks to all the global warming. Car is allowed until about 2-3 kilometers before lake. The final distance of a couple of kilometers would have to be walked but it is not really too tough or steep; Uncle & Aunty should be able to manage it at a slow pace.

Thanks for such a quick response! Also how much would a private cab charge for the entire circuit (Shimla – Kalpa – Kaza – Manali) for approximately 10 days? Can we get the cab directly in Shimla or Manali without pre booking?

For cabs talk to Jamaica at 9418200183. He will be able to give an idea on how much the cab will cost and if required, will help you book one too.

After reading your blog, I decided to spend a night at Chandra Taal, specially in Jamaica Tent, which has become one of the best nights of my life. Thanks a lot Khan Sahab( Jamaica Bhaiya calls you Khan Sahab)

Thank you Swati. Jamaica is indeed a great guy. I am glad that the information was of help.