This article is in continuation of a previous one and a part of my Delhi to Auli road trip. We arrived in Auli on Day 1 and went on a single-day trek from Auli to Gorson Bugyal, details of which are covered in the post below. To read the previous part of the travelogue, please click on the link below.

We got up at 5 to see the sunrise over Nanda Devi at the meadow. The view was good, but not excellent. We then decided to go to higher ground and took the track going to Clifftop Resort.

We stopped halfway up this track on another meadow and watched the sunrise with a couple of horses grazing next to our car. What a feeling! The rays of the sun hitting the tips of the mighty mountains surrounding us and the golden glow of the morning brought a deep satisfaction to our hearts, and we were then more than ready for an adventurous day ahead.

Also Read: How to Plan a Road Trip to Auli –  A Complete Travel Guide

A horse was grazing in the meadow watching the sunrise over Nanda-Devi – with us. The gradient beyond GMVN was pretty steep actually 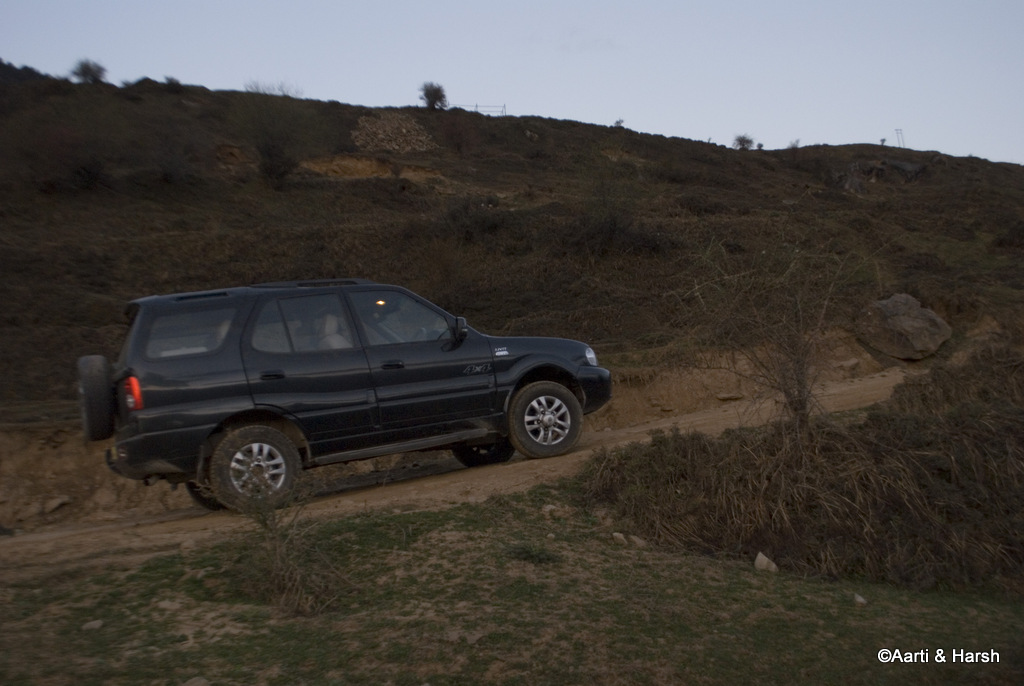 The first rays of the sun hit the majestic Nanda Devi. Hathi Parvat also gets lucky with some rays hitting it too. 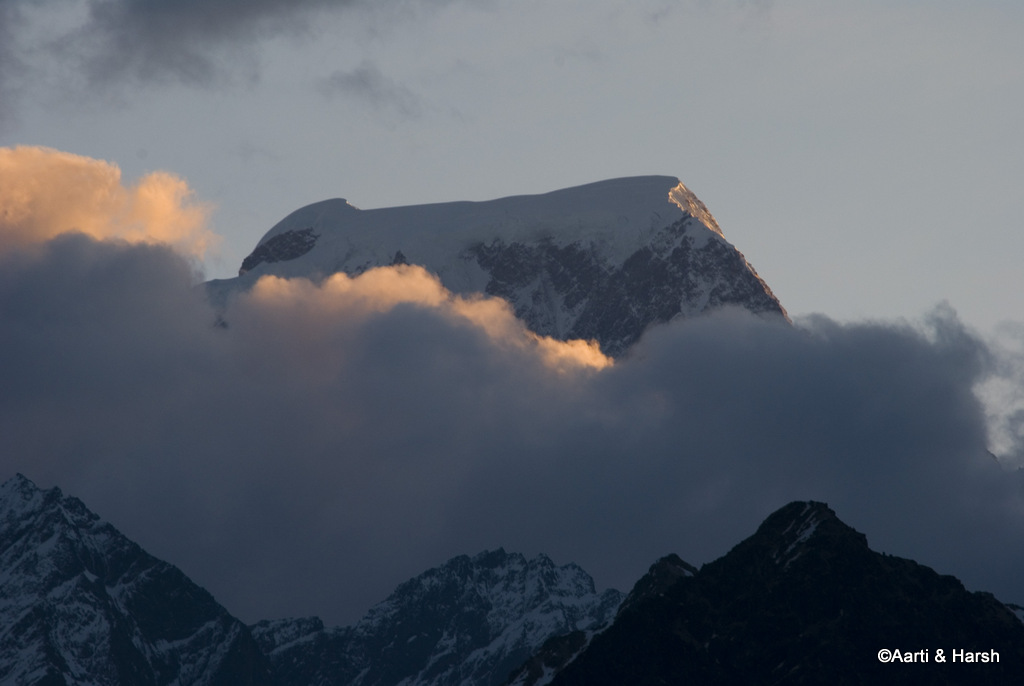 A view of the peaks towards North – i.e. – Badrinath 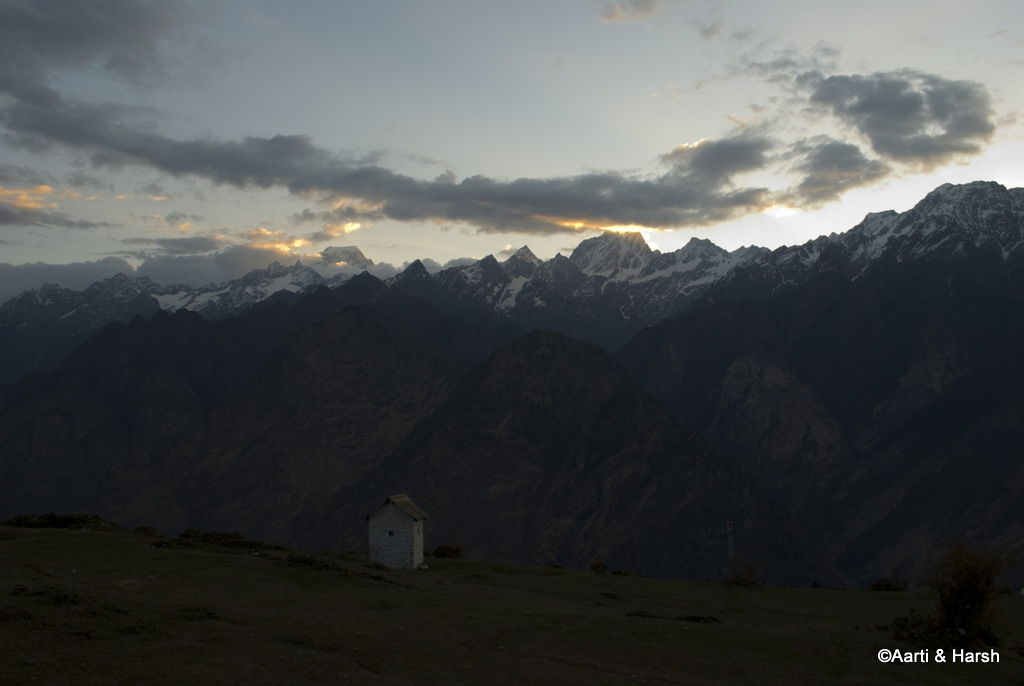 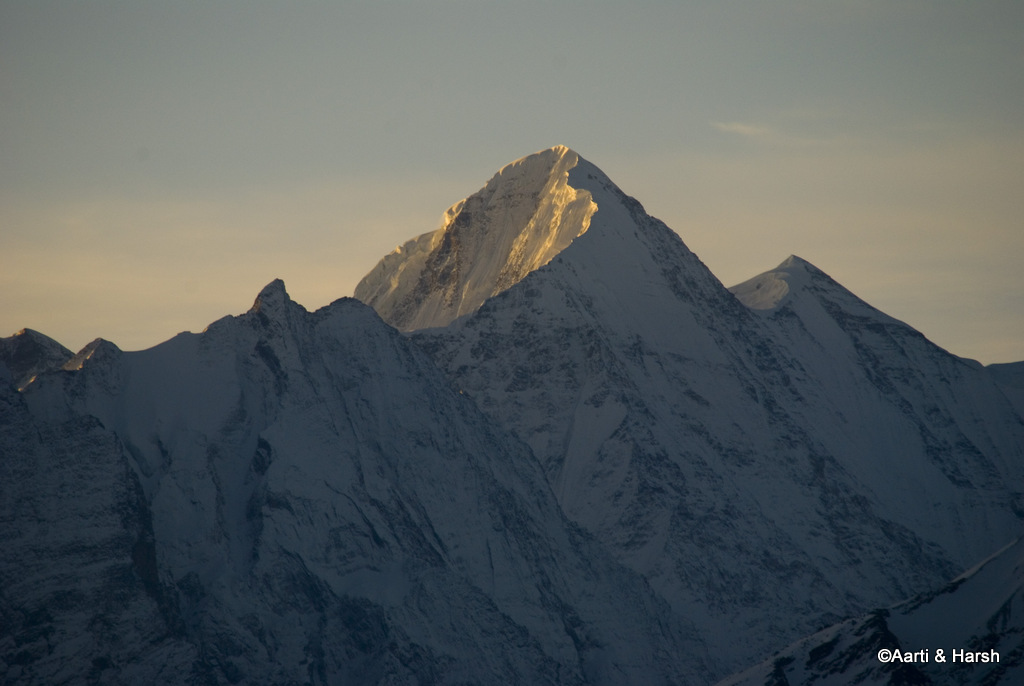 Some of the peaks had just the right amount of cloud hovering over them. 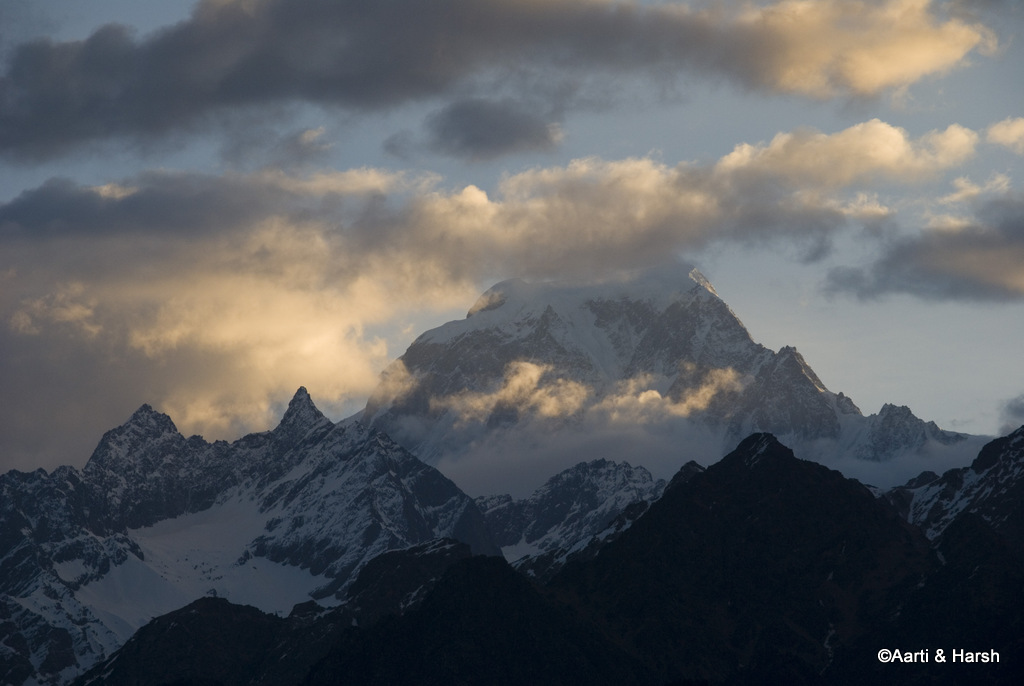 We went back to our hotel to get ready and have breakfast. Thereafter, around 9:30, we got back into Kiyang again and drove to a point beyond the Clifftop Resort which was the maximum one can take a car to.

From there we began our hike to Gorson top. For the first 15 minutes, the hike is an absolute ascent as one walks next to the non-functional ropeway. While the ropeway usually works in the winter to ferry skiers to the top, the locals told us that it didn’t last season due to some damage.

There is a small shop at the ropeway junction from where we bought some chocolates, chips, and water, and then moved on. The shopkeeper urged us to rent snowshoes so that we could walk easily on the snow which he said we would encounter as soon as the forest began. However, they looked uncomfortable and we decided against hiring them.

We continued the climb, and soon reached the forest, where, as we’d been told, the snow began. This was basically the snow that hadn’t melted since the trees do not let enough sunlight through. Initially, it was possible to walk around the snow since it was only in patches, but gradually as we moved higher it became increasingly difficult to avoid it. It wasn’t that bad, but just a bit tricky to walk on it.

An hour or so later we reached a temple. An American couple on their way to Kuari pass were resting there. We chatted a bit with them, had some water and chocolates, and then moved on. After the temple, the forest ends, and a meadow begins which extends all the way till Gorson top.

There was little snow here, and it was much easier to walk, although the incline increased a bit. We spotted a small pond on our left and recalled how a bunch of our friends had spotted a bear at that same spot last year. We were hoping to also catch a glimpse of the hairy animal too, but of course, it wasn’t there! 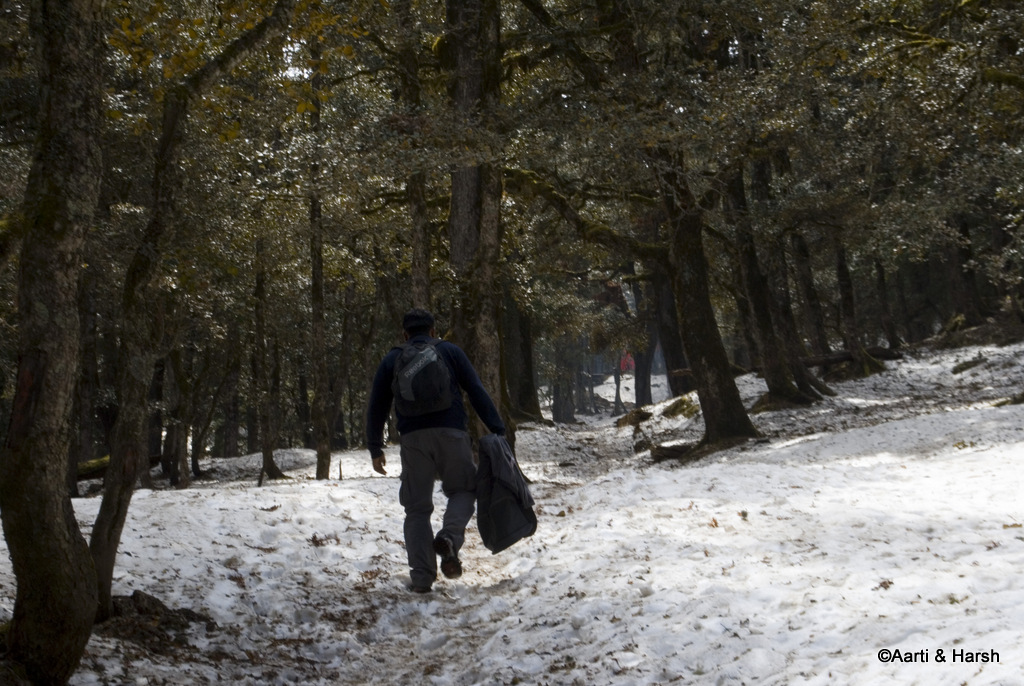 The Jungle & The Temple

The walk through the jungle was a tad difficult – with melting snow. The jungle itself is quite beautiful and thick. Soon one reaches the temple, just before the clearing above. And the forest gives away to a vast meadow at the top. 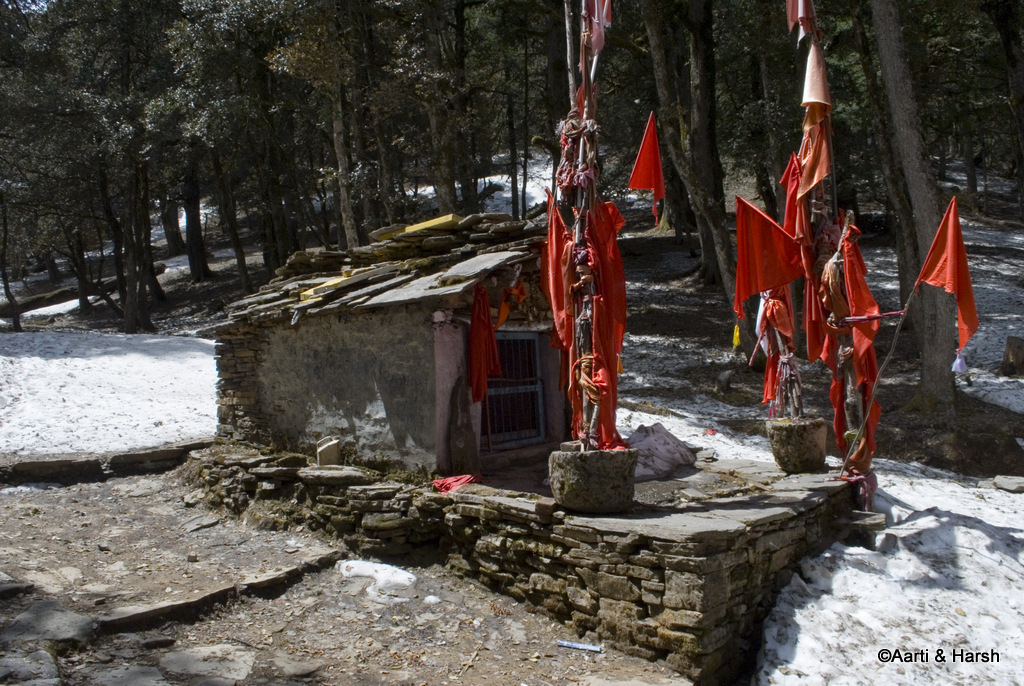 We walked to the base of the final ascent to the top and stopped. Unfortunately, we couldn’t go any further because from that point the snow was thick and very difficult to walk on. We were also pretty satisfied with where we had reached, and the view was excellent.

Clouds had, again, played spoilt sport and hidden the peaks from us, but the panorama was nevertheless divine. We basked in the sun and the beauty around us for a while. Aarti even took a short nap!

We snacked on our chips and chocolates and wondered about the trek to Kuari pass. We also spotted two much-in-love mongooses running about, but couldn’t catch them on camera. Still, we had fun clicking a couple of shots with our tiny tripod, only to later delete most! All in all, we spent a good hour at the spot and then decided to walk back down.

We stopped at the temple again for a couple of shots and then resumed our return. On the last leg, just before hitting the ropeway junction, Aarti slipped twice in the mud. She didn’t get hurt, but the mud soiled her clothes, which according to her was much worse! Boy, talk about getting your priorities correct!

Finally, around 2:45 pm, we reached Kiyang. The whole hike had taken us about 4 hours – two hours up, 1 hour at the top, and 1 hour down. We were tired, but not exhausted, and were very happy at having done the short, fun hike.

A panorama at the top

Clouds block our view of Nanda Devi at this hour. And we reach back – almost!

Our royal steed awaits us. 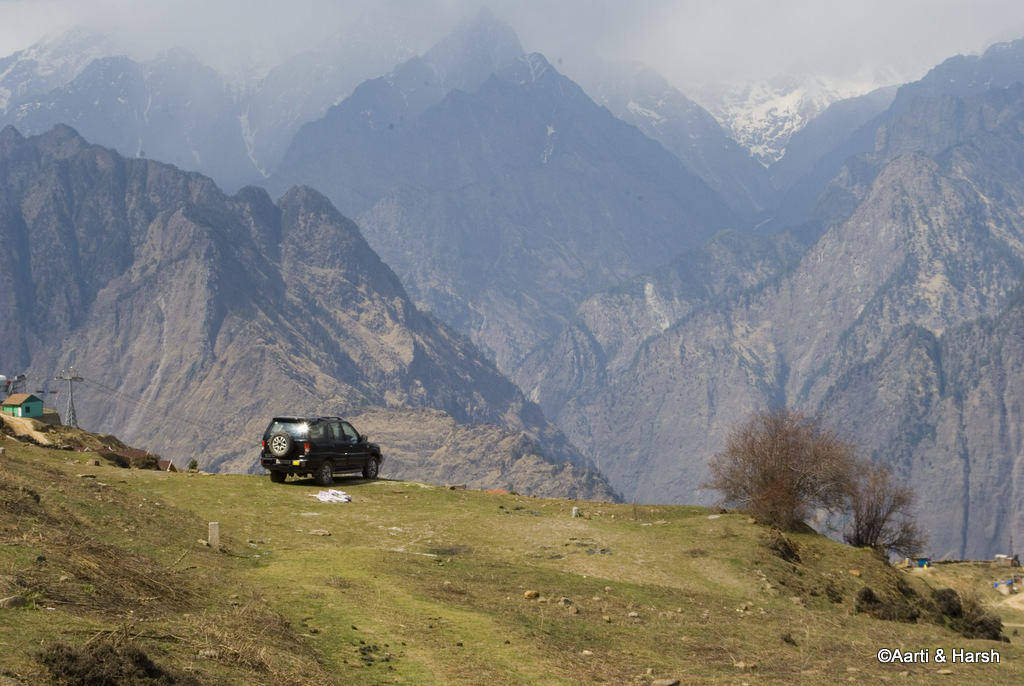 The parking lot itself was a fantastic place to idle around.

We drove down to Clifftop Resort and had Maggi for lunch at our favorite dhaba (which stands opposite the resort).

We then went back to the hotel, rested and freshened up a bit, and were back at the same spot around 5:30 pm to watch the sunset. Sunset and chai happened at the dhaba, after which we returned to the restaurant in our hotel for a leisurely three-course dinner – soup accompanied with looking through photographs of the day, main course, and dessert!

With satisfied tummies and tired legs, we hit the sack, planning and plotting the route for the next day as we dozed off. The initial plan was to do the Vasudhara trek from Mana village. However, with reports of the road being blocked at Hanuman Chatti, it was highly unlikely that going all the way to Badrinath would be possible. We nevertheless decided to give it a shot. Little did we know that in this land, if you are not a religious tourist, you are not important!

Sunset views could have been jaw-o dropping, but alas clouds rob us of a killer view. 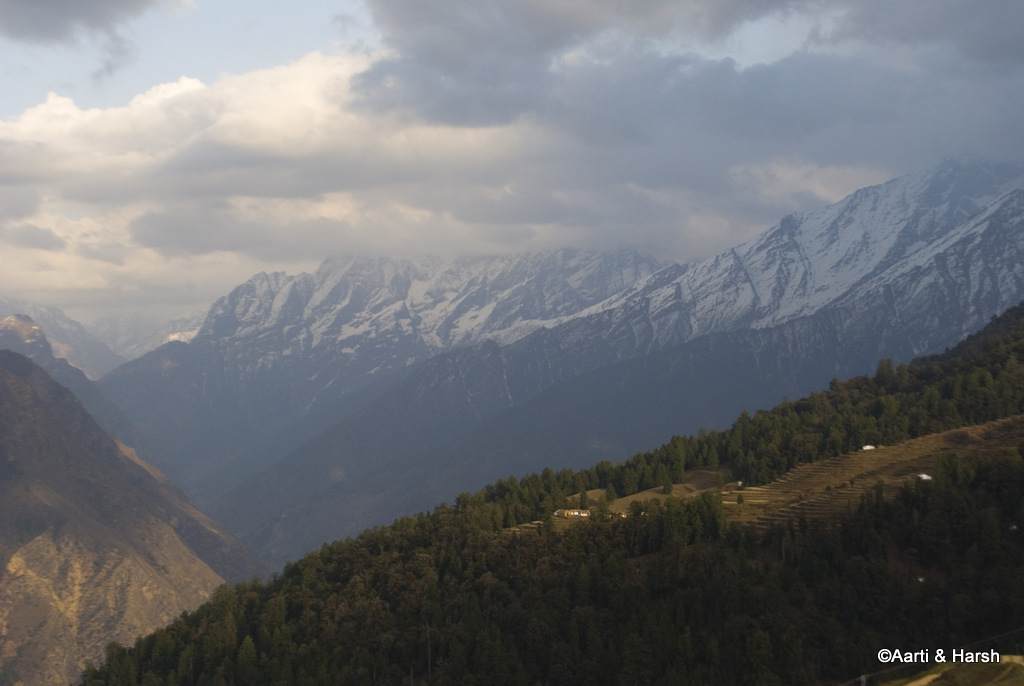 The dhaba near the cliff-top resort which is a perfect place to sit around. 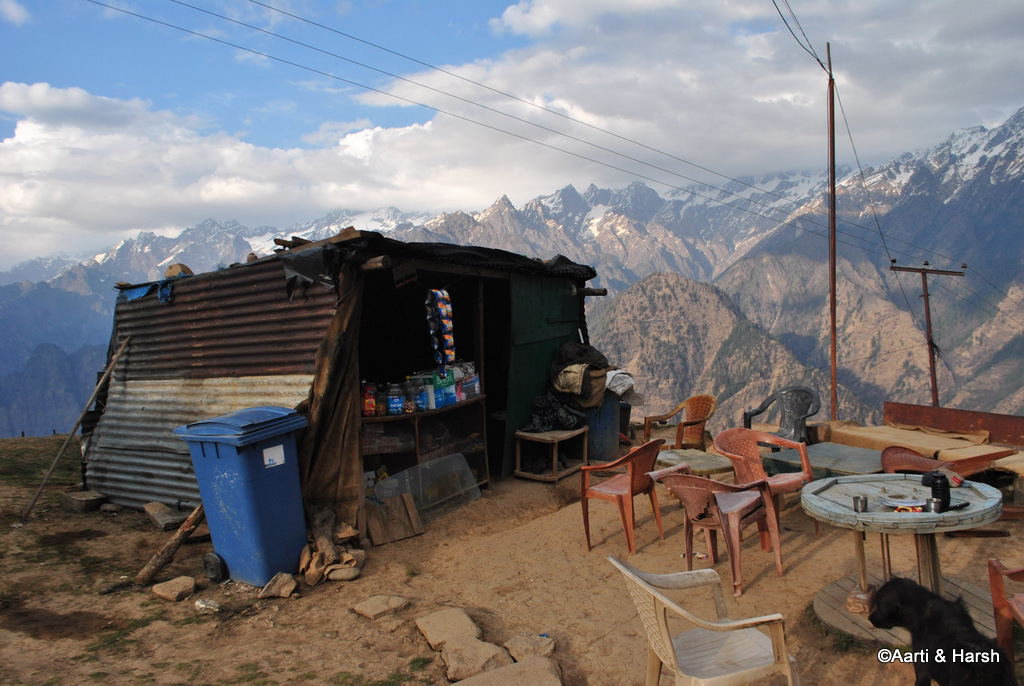 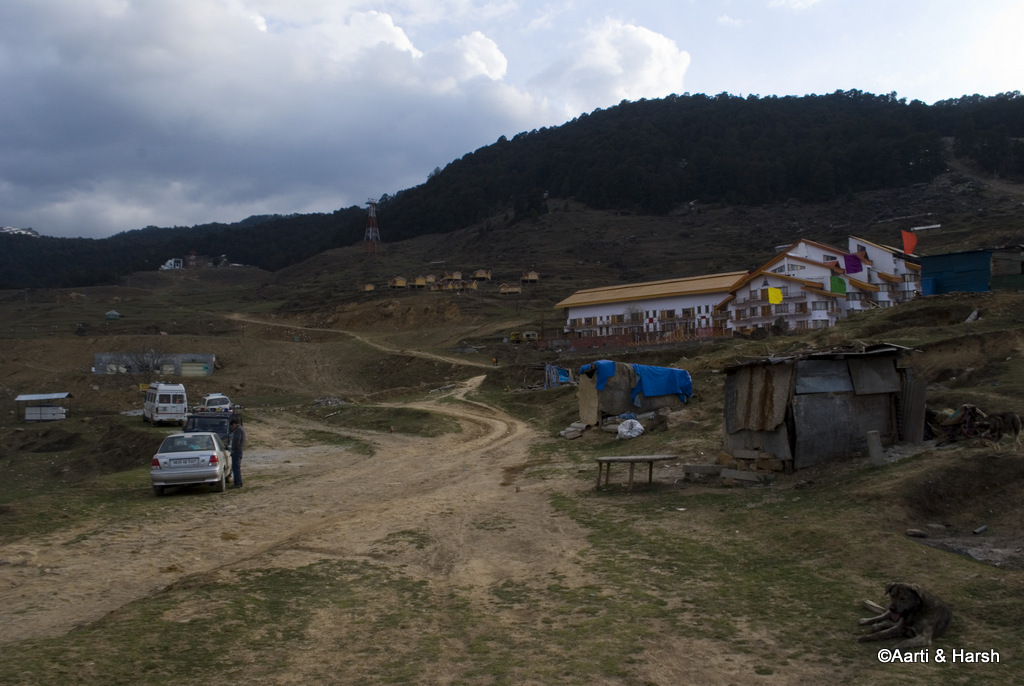 Another day of adventure and excitement came to an end but with a lot of anticipation for the next day. Please click on the link below to continue reading the next part of the travelogue.

I hope the travelogue, pictures, and the information on Auli to Gorson Bugyal trek were of help. If you have any questions or need any other details, please feel free to ask in the comments section below or at our Community Forum, and I will be glad to answer.

Hey Harsh, thanks for that vivid description. I just had a small question. Just wanted to understand, where Kiyang is and how we can reach there. Also, will I be able to trek from Kiyang to Gorson and back to-Kiyang in 6 hours?