Mummy Of Spiti Valley – The Story of Gue Village Mummy

Mummy – The very word is enough to arouse anyone’s curiosity. The same thing happened when I was first planning to travel to the majestic Spiti Valley. Until 2 days to our departure, I had no knowledge of a mummy of Spiti Valley and my sole intention to visit Spiti was to see the natural vistas that it has to offer.

And then one day, while preparing the itinerary for my visit, I came across the name of a small remote village called Gue (also spelled as Giu Village, Geu Village or Ghuen Village) and the mummy that resides there.

Now this was really exciting as I had never seen a mummy before. The first image that formed in my head was that of Egyptian Mummies, wrapped in white bandages because that is how we were always told that a mummy looks; a body embalmed and wrapped in a cloth-like material or like bandages.

But when we finally reached Giu, I was completely surprised. What we found there inside a glass case was a naturally preserved dead body, not wrapped in any bandage, completely dried up and the eyes, teeth and hair on its head still intact. His fist was around one leg and chin resting on his knee. 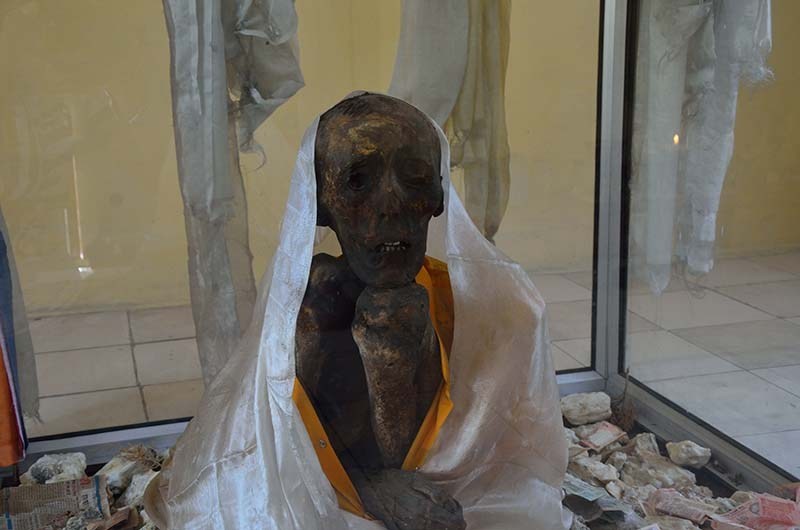 Gue is a small village, comprising barely of about 50 to 75 houses, situated at a height of approximately 10,000 feet above the sea level. It is located between the towns of Sumdo and Tabo, around 40 kilometers away from the popular 1,000-year-old Tabo Monastery.

A yellow colored large cemented gate marks the deviation towards the village on NH-22. From here it is a steep 9 km climb on a “somewhere good-somewhere bad” road to the hilltop where Giu Village is located. The locals have now also put up several boards of the Mummy to mark the entrance to the village in order to attract tourists.

Spiti is one of the most sensitive border areas of the world, Until lately, this region has not seen much of tourism despite the fact that it is one of its kind. It means that if it wasn’t for its Mummy, the small village of Gue would probably have forever remained unknown to the world. But now, every year, the mummy attracts a steady stream of wanderers despite the remote and inhospitable location.

The Mummy of Spiti Valley

Its existence has created a buzz in the tourism circuit but how this Mummy came to be, who it was a person in real life and how it landed in a glass case in Gue Village is quite a story in itself. As per the locals, who award it the status of a deity, this Mummy is of a Lama who died at the age of 45 years nearly half a millennia ago.

The official statement is that it was discovered by chance by the Indo-Tibetan Border Police (ITBP) during road work. Some say that they came upon the Mummy while digging trenches in the area. Either way, ITBP takes full credit for finding the Mummy in the year 2004.

The locals, however, claim that they have already known about it ever since the 70s when this Mummy was located in a tomb at a different location. Then came the 1975 earthquake of Spiti that created extensive damage in various parts of the valley and destroyed the tomb as well. This was the earthquake that near well demolished the entire Nako monastery as well.

After the earthquake, the tomb was buried and the mummy was lost from 1975 to 2004; until it was officially discovered by ITBP during excavation. After that, the Himachal government has undertaken the maintenance and security of the shrine. 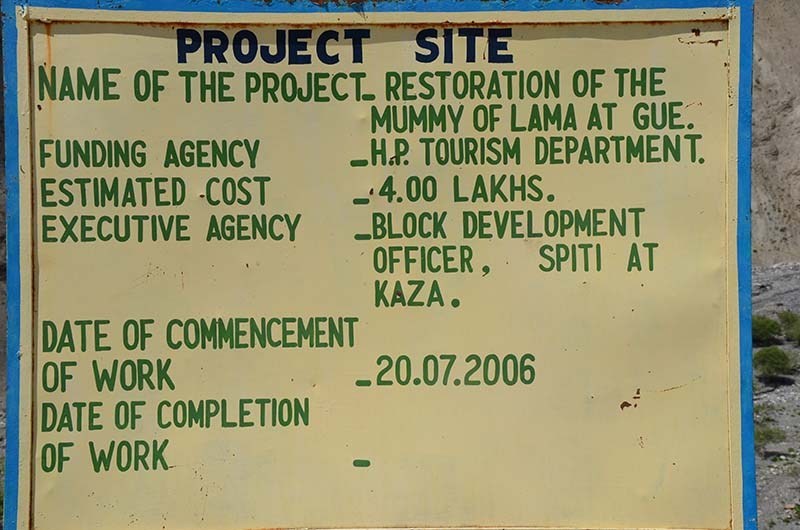 Fondly called ‘Mummy Lama’ by some villagers, the Mummy is believed to be of Sangha Tenzin; a monk from the Gelugpa order of Tibetan Buddhism. While there are no official records to claim this statement; there are certain scientific facts that can be looked upon in this aspect.

Carbon dating by a team from Vienna has revealed the Tibetan mummy dating back to the year 1475, making it over 500 years old. The Mummy was found in a sitting position [which it remains to be in till date] with a rosary in one hand, with all body parts intact and a strange belt running down its spine, from neck to lower parts of the body.

This suggests that Sangha Tenzin, was from a group of monks who were practitioners of “Dzogchen”; one of the highest forms of meditation. The strange belt tied around the body could be a ‘Gomthak’ that Monks used to tie around their neck to their knee while meditating.

Also Read: Cloths for Spiti Trip – What to Pack

Mummification, as history proves, was not a common Tibetan practice, as it was in ancient Egypt. Tibetans in old times would either offer their dead to the vultures and fishes or would cremate. Still, some of the high priests were mummified and bodies kept around out of devotion, as a guide, someone to believe in.

Almost all Tibetan monks were mummified or preserved in a squatting position, then the reclining posture. Another difference between the Egyptian and Tibetan Mummies is in the way of preservation. While the Egyptians used the embalming technique and used several chemical ways to preserve the body of their dead; Tibetan mummies were said to be natural, meaning that the monks willed themselves to death through starvation and meditation.

This process of self-mummification is called ‘Sokushinbutsu’. Using the advanced yogic postures and surviving on barks, they used to deprive their bodies of all juices, fats, and bacterias, which preserved the body with no chemical embalming involved. The monks will also eat small doses of poisonous cycad nuts and lacquer tree sap; which will help remove moisture from the body while they were alive; and will deter flesh-eating bugs after they died.

This is the same way that Sangha Tenzin is also believed to have mummified himself; and hence the completely dried-up body.

Also Read: How to Handle Acute Mountain Sickness in Spiti

The mummy in Lahaul Spiti is believed to be the oldest one but is actually incorrect. Interestingly, this is not the only Buddhist Mummy that exists. There have been several other known mummies in Tibet, which were destroyed by the Buddhists monks themselves; fearing the onslaught of the Chinese after the Cultural Revolution.

However, there were a few that survived, mainly because of the fact that these were all in India. There are said to be about eight mummies in the monasteries of the Ladakh and Spiti valleys as well as one each in Kalimpong and Dehradun. Two of the well-known ones are of Yogi Amtrin and Sangha Tenzin.

And then there is also the body of Kyabje Yongdzin Ling Rinpoche, present Dalai Lama’s tutor, who died more than two decades ago, and his body is currently preserved in McLeodganj.

Apart from these scientific and logical explanations, there is also the folklore that you can hear about from the villagers; who believe that the Mummy has been looking after their village for centuries.

One version of the story is that the Monk sacrificed his life; and mummified himself to rid the village from the menace of Scorpions. It is believed that after the deaths of many villagers, Sangha sat down to meditate for the betterment of the village; and asked his disciples to entomb him. As his soul left for heaven, a rainbow appeared across the sky; and the village hasn’t seen even a single scorpion till today.

Another version of the story is that in ancient times, right through Gue village, passed an important trade route between India and Tibet. Those were the times when this small village prospered but slowly the traders found better and shorter routes. As fewer people traveled through the village, its prosperity also vanished over time. It was this prosperity of the people that Sangha Tenzin wanted to restore and sacrificed his life for.

The Monk Mummy of Spiti Valley

“This is what he has been trying even in death you see,” said a Villager. “Even now he sits here at our village, attracting more and more people to visit us here”

Prayers are offered daily at the shrine by the locals. This is a world divided between the scientific and the mystical but one thing is for certain. It is the Mummy of Spiti Valley that puts the small village of Giu on the global map. Whether or not this was his intention but the Mummy of Sangha Tenzin does attract a lot of attention to the small village of Gue. If it wasn’t for him, no one would ever care to visit this unknown village.

The next time you are in Spiti, do take some time out and take the road towards Gue Village. Visit the famous mummy of Spiti valley and add a new experience to your trip. You may find the shrine to be closed at the time of your arrival; but do not give up and return. The villagers keep the shrine locked and only open when someone arrives to visit. Just ask around and the caretaker will come and open the doors for you.

I want to visit Giu village
Please tell me details of transportation from new Delhi and how much time it requires, so also the lodging and boarding.

It is hard to miss. As you travel from Nako to Dhankar, there is a huge gate on the road and villagers have marked it very well. There are large photos of the Mummy along side the road to ensure that tourists notice it and visit the village.

how bad is the road in spiti?..can we go taking an Alto k10 through shimla route?

By Shimla route yes you can.

very nice article.. in detailed …thanks for sharing!

W. Salam Ashish Bhai … When are you visiting and which place in Spiti are you asking accommodation about?

Thank you for this article. You have inspired me to visit Giu. 🙂

The mummy is there, I have seen it myself

What these things lying around the Mummy????

Salam Vargis Bhai, Thanks for the enlightening info…pls suggest some good place to stay in spiti.