Top Posts
Delhi to Jispa – A Journey to the...
Travelling Solo with a Child – How to...
How to Plan a Bike Trip to Leh...
How to Plan a Ladakh Bike Trip With...
Best Time to Visit Jispa – Weather of...
Jispa Village – How to Plan your Trip...
Road Trip to Zanskar and Ladakh – Exploring...
Kashmir Bike Trip – Bike Ride in Kashmir
Leh to Delhi by Bus via Manali –...
Leh to Nubra Valley to Pangong Lake by...
Jammu & KashmirLeh-LadakhTravelogues

Trouble in Leh City and a Ride to Khardung La

This article in in continuation with Day 4 of the travelogue of one of my Ladakh trips. We reached Leh City on Day 4 from Pang and travelled to Khardung La on Day 5 amidst a chakka Jam, Bandh and protests all across. Please go through the article below to read previous parts of the travelogue.

Today, as we were told by the locals the day before; was going to be a bandh as well as a chakka Jam in effect from 10 AM till 4 PM. So 2 things were on agenda when we woke up that morning.

After our morning tea, which was again quite a hassle to get; I went out in search of a Mechanic while the remaining three started to check out; and move our luggage back to Shanti Palace.

After almost an hour of roaming around in Leh City, I still could not find a mechanic shop open. Upon asking a few people, I was told that any chance of finding a mechanic was only going to be late in the evening; since it was going to be a chakka Jam in a couple hrs.

Finally when I was about to give up on my search, luck favored. I stopped at a tea shop and just for the sake of it, asked the owner of a mechanic while sipping down the tea. He instantly took his cellphone out and called some guy; asking if he was going to open his garage today. Fortunately the mechanic on the other end too was also interested in a customer on a day when the entire town was going to be closed. The tea stall guy pointed me in the direction of the where the mechanic lived which was just a few steps away. I walked over, spoke to the mechanic and together we brought my motorcycle to his shop.

My luck was definitely shining bright since we found a matching ball bearing in a few minutes; and by the time he finished with my motorcycle, the clock was showing 9 AM.

We had plans of visiting Khardung top that day (didn’t want to visit Nubra Valley again as I had already been there a few times) and there was still an hour left before the bandh and Chakka Jam was to come in effect.

It meant that we could get the other 3 motorcycles checked and be on our way to Khardung for the entire day while Leh City remained closed. It however took longer than I expected. The other three finished checking into Shanti Palace and it was almost 10 when they reached the mechanic’s shop with other 3 motorcycles.

At this time, Shoaib and Sunny came up with the weird plan of visiting Khardung on bicycles. I say weird because they wanted to ride up to a pass which claims itself to be the highest motor-able road in the world on bicycles; when neither of them even remembered the last time they sat on a bicycle. I knew this plan was not going to work because it was a steep climb of 35 kms; and there was no way that either of us could just do it in a few hours.

After a long discussion, and hell of a convincing Shoaib and Sunny; the plan was trashed and we again focused on getting the motorcycles fixed but it was a bit too late for Khardung already.

Finally all three motorcycles were checked and repaired. Clutch plates on both Sunny’s CBZ and Rohit’s pulsar were completely burnt out and had to be replaced. Now came the tough part of deciding what to do. Shoaib had already gone back to the hotel before Chakka Jam came in effect; but Rohit,Sunny and I were still at the Mechanic’s shop. There were locals walking around with lathis in their hands forcing people to shut their shops down. Police jeeps had already started to drive around advising people to not take their vehicles out until 4 PM; but we could not just stay out there for next 6 hrs. We had to go back to the hotel.

We looked at our watches, it was half an hour past 10. Deciding to take a chance, we kick started our motorcycles with our minds made up that no matter what, we aren’t going to stop before reaching the hotel. Sunny, the brave one, started a few minutes ahead. Rohit went after him and I was the last one. The moment I came out of the narrow gali, on the main road, I noticed Rohit riding his motorcycle back and a few meters ahead of him was Sunny, surrounded by a huge crowd of locals and a police jeep standing right next to him.

Out of impulse, watching Rohit coming back towards me, I also turned back. We both again parked our motorcycles in the gali, outside the mechanic’s shop and ran out again on foot, to where Sunny was being held by the locals. But by the time we came out, which was just in a matter of a couple of minutes, he wasn’t there. The police Jeep was gone too and the crowd was walking away.

Not knowing what happened, we called Sunny’s cell immediately and to both of our reliefs, he was already at the hotel. From what he told us later, the crowd threatened him a little, the cops warned him using enough of the “F” word and then let him go.

Now with Sunny gone, It was me and Rohit left out standing on the road. After watching what happened with Sunny, our spirits were already shaken enough. For a moment we thought to let our motorcycles be parked where they were and come back in the evening to collect but that was also a risk, considering the tension and excitement in the air. Someone could damage the bikes, or worse, steal them. We walked a little ahead and the road seemed clear. The crowd at the chowk was gone and only a couple of cops were standing a little ahead. It seemed safe and clear enough to take a chance again.

We brought the engines back to life once again and with a final nod to each other, accelerated. It was hardly a matter of couple of minutes and a few meters but that small distance was also covered with our speedometer needles pointing at a speed of 80 kms / hr. We only stopped after we had safely parked our motorcycles at the hotel.

The deserted Chowk where all this drama happened; and locals stopping every passing by vehicle. 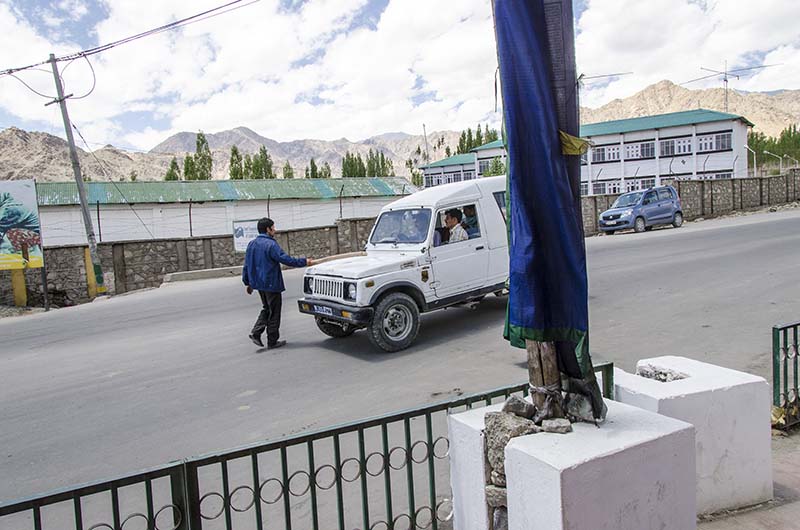 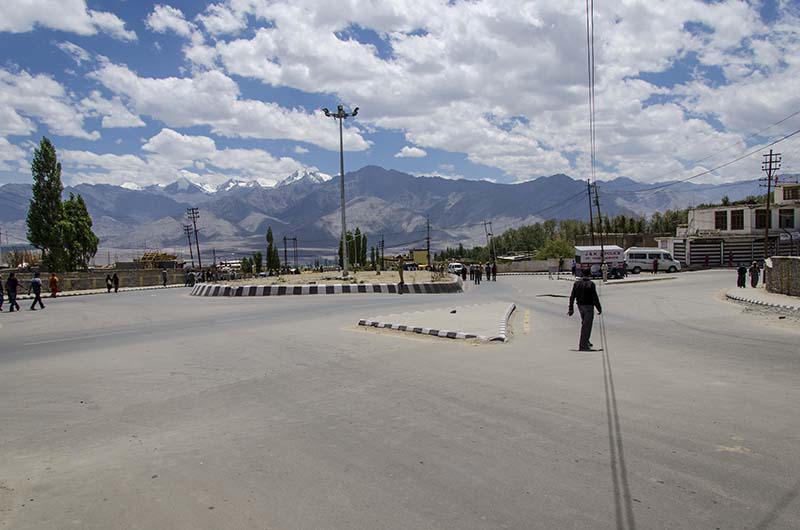 Now there was nothing much we could till 4 except for just sitting idle. I decided to go out for a walk and Rohit agreed to join. Shoaib refused to get out of the bed and Sunny, after his recent encounter, was in no mood to step out. The very mention of going out for a walk made him crawl under the blanket.

I was a little apprehensive of taking my camera out with me but noticed a few other tourists taking a stroll with their cameras in hands. You do not see an environment like this in a peaceful town like Leh City and I did not want to miss the opportunity of clicking a few pictures. With Rohit on my side, we stepped out of the hotel and next 3 hours were spent walking around in the city. 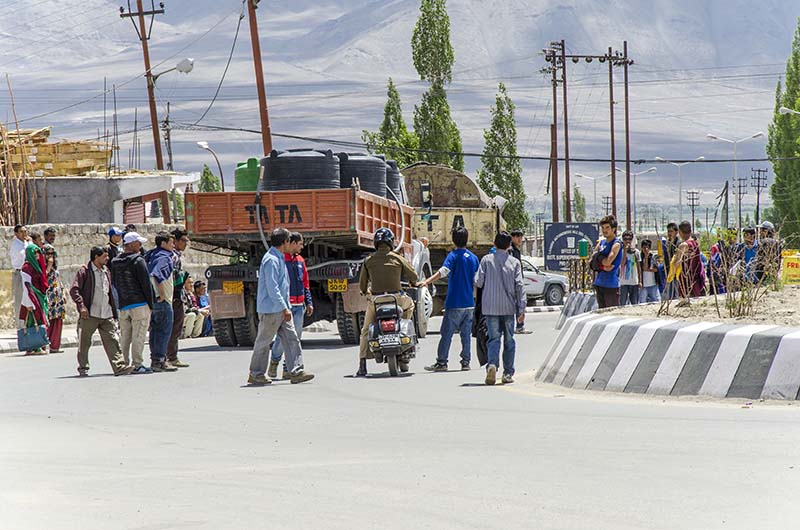 After walking around for a couple of hours, we returned to hotel at around Lunch time. Finally the bandh ended at 4 pm and after making sure that there were enough vehicles on the already the four of us took our bikes out and started on the ascent towards Khardung. 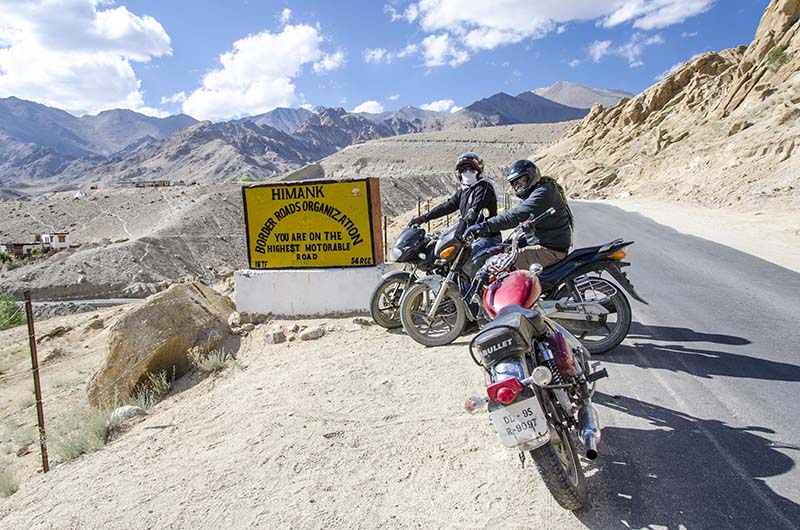 We were at Khardung Top in about an hour, our 6th high altitude pass in the journey so far. 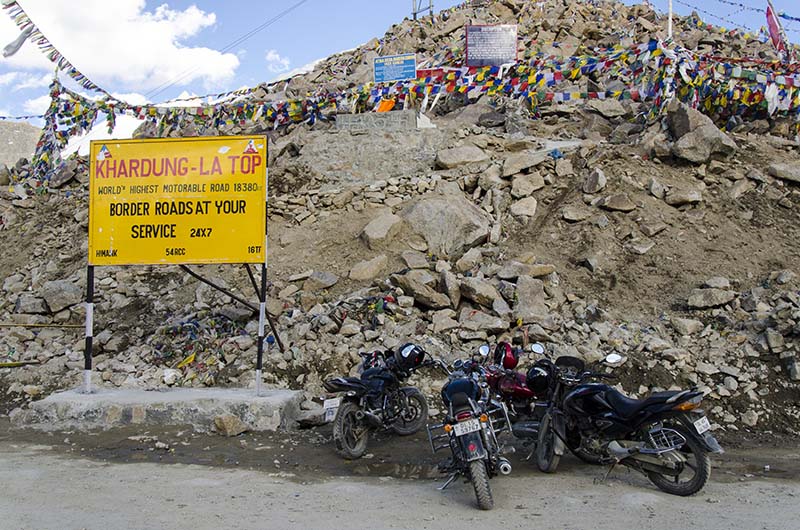 Back to Leh City

After spending some time, a cup of black tea and clicking enough pictures, it was time to head back to Leh but It was already dark by the time we entered the city. Sunny and Shoaib had already reached ahead of us. Rohit and I were clicking a lot of pictures due to which we fell behind a little. We reached the hotel and met them there.

All of us wanted to eat non-vegetarian for dinner but the problem was that most of the restaurants were still closed due to the bandh. On top of it, I don’t know why but all of a sudden, I wanted to get rid of the beard and mustache that I had been carrying around for last few months. We also had to buy some stuff before we leave Leh City for Pangong. So it was decided that Rohit and I would go visit the barber while the other two would go do some shopping.

Though the plans were of a clean shave, I decided to let the mustache stay. 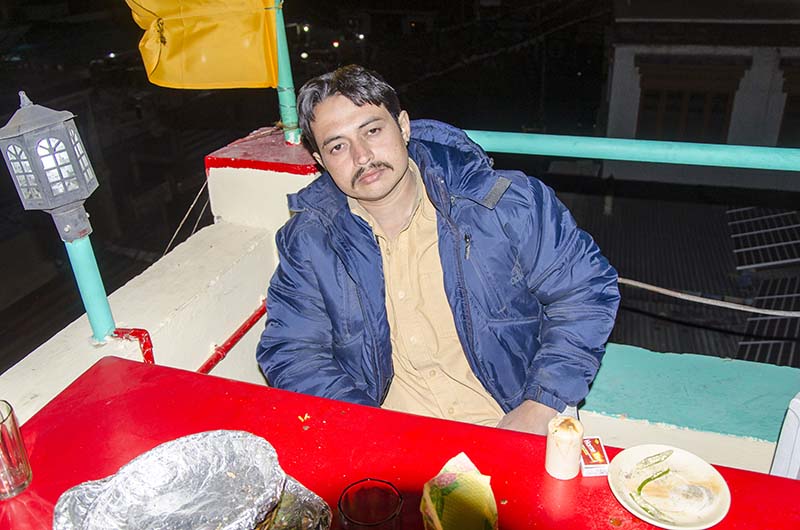 We all met at the hotel again an hour later. After Sunny had a hearty laugh looking at me in mustache; It was time to go find a place to eat.

Half an hour worth of search later, we found a restaurant that was serving non-vegetarian. Because of the bandh today, most of the restaurants were closed; and the ones open only had vegetarian on the menu; so it took quite some effort to find a place to eat non-veg.

Roof-top restaurant where we ate. 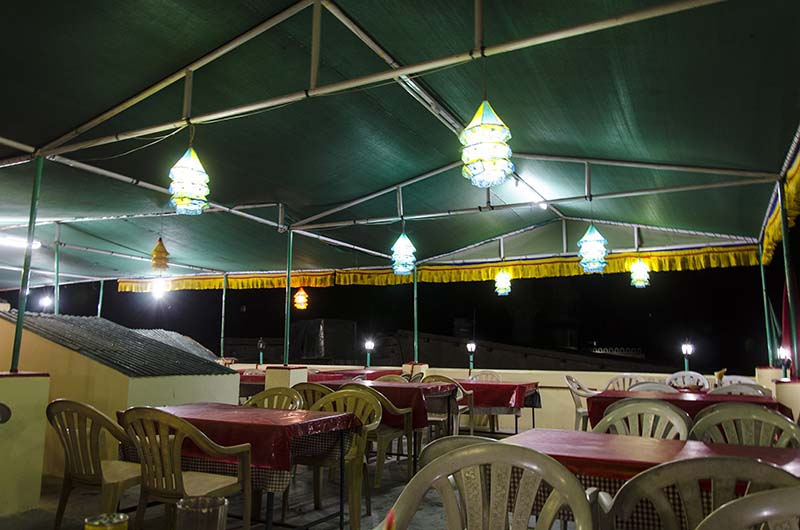 With our bellies full, we returned to the hotel. A little bit of TV, some chit chat and It was time to go to sleep. So far we have had 6 breakdowns; have been at top of 6 high altitude passes; one of us almost got manhandled by a mob; had seen a peaceful town in protest; rode around in a chakka jam and almost got arrested once.

Planning a trip to Ladakh? Got questions or need any help? Feel free to ask in the comments section below; or at our Community Forum; and I will be glad to answer.

How to Plan a Ladakh Bike Trip With...