This article is in continuation with a previous one and a part of my Ladakh travelogue.  We arrived in Leh from Delhi via Manali Leh Highway in 5 days. The sixth day of the trip was spent in Leh City sightseeing and arranging permits for the remaining part of our trip. To read the previous parts of the travelogue, please click on the links below.

The news from the permit office was confusing. Alpha (a friend) had been unable to convince the high and mighty who give permits to give him the permission to go to Hanle via Chushul. Saurav Biswas (another friend) on the other hand, was lucky though to get permits for each and every corner of Ladakh. Only time would tell what lay in store for us.

At Barath, we ate a hearty breakfast of toast, omelets, and cornflakes in the ‘aangan’ outside our rooms. Plans were made – the famous Mr. Sharma, the great RE mechanic, had to be visited, but before that, the bikes had to be cleaned so that he could have a look at the battered vehicles.

It is said that Mr. Sharma can diagnose a problem inside the engine by hearing only the sound of the Bullet. I was looking forward to meeting this legend in person. For now, the boys decided to head first to Mr. Sharma while Yeshu and I decided to head to the polo grounds to get the permits. The girls decided to chillax and do what they do best – shopping in Ladakh!

View of the peaks from the guest house 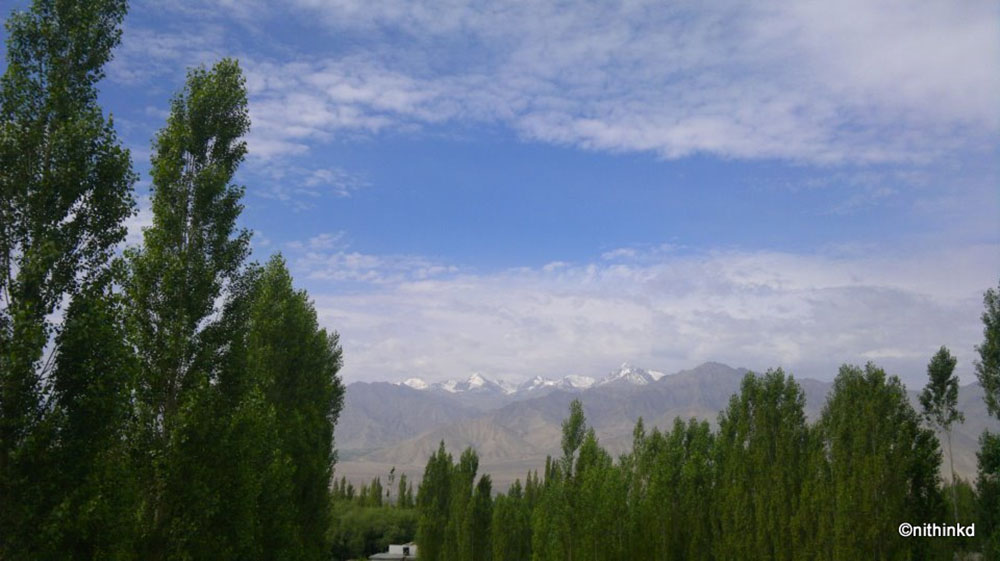 Our guest house grew its own veggies 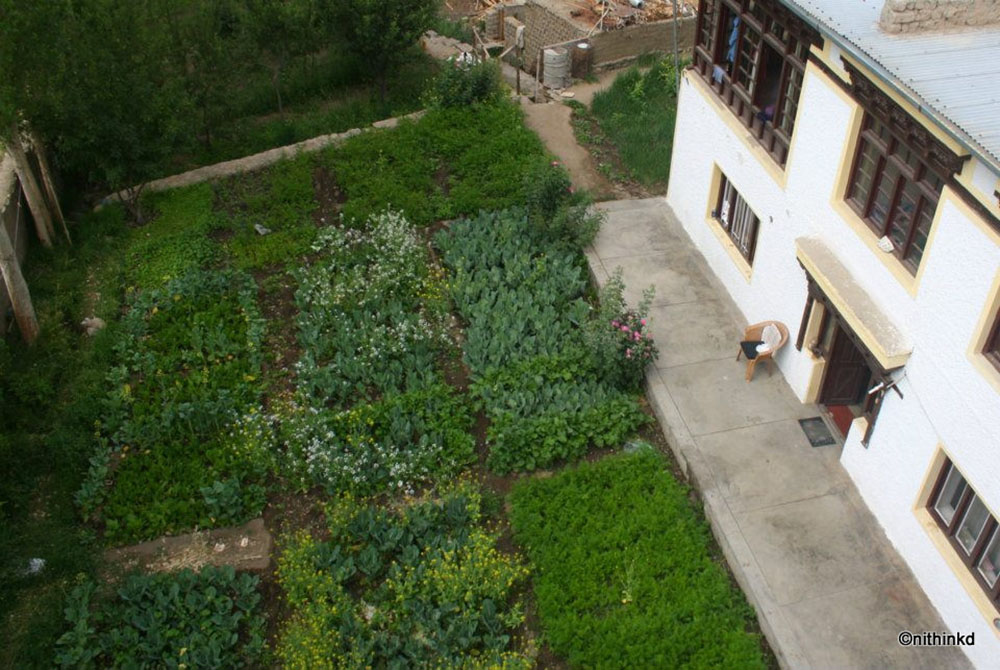 It boasted of its own parking lot as well 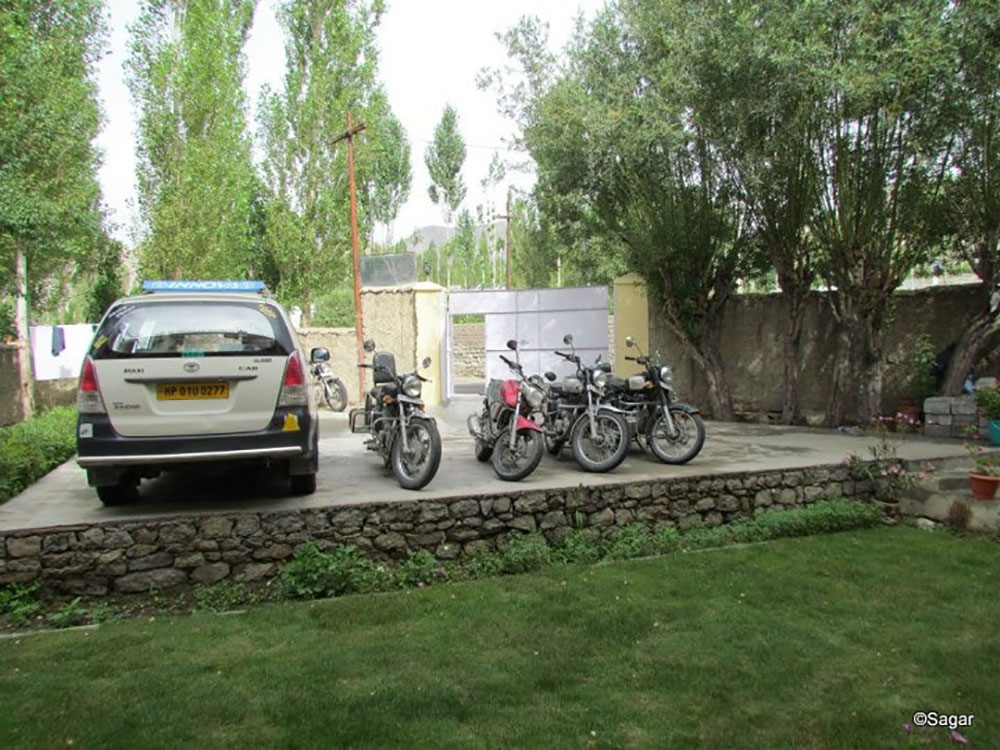 Another view from the guest house 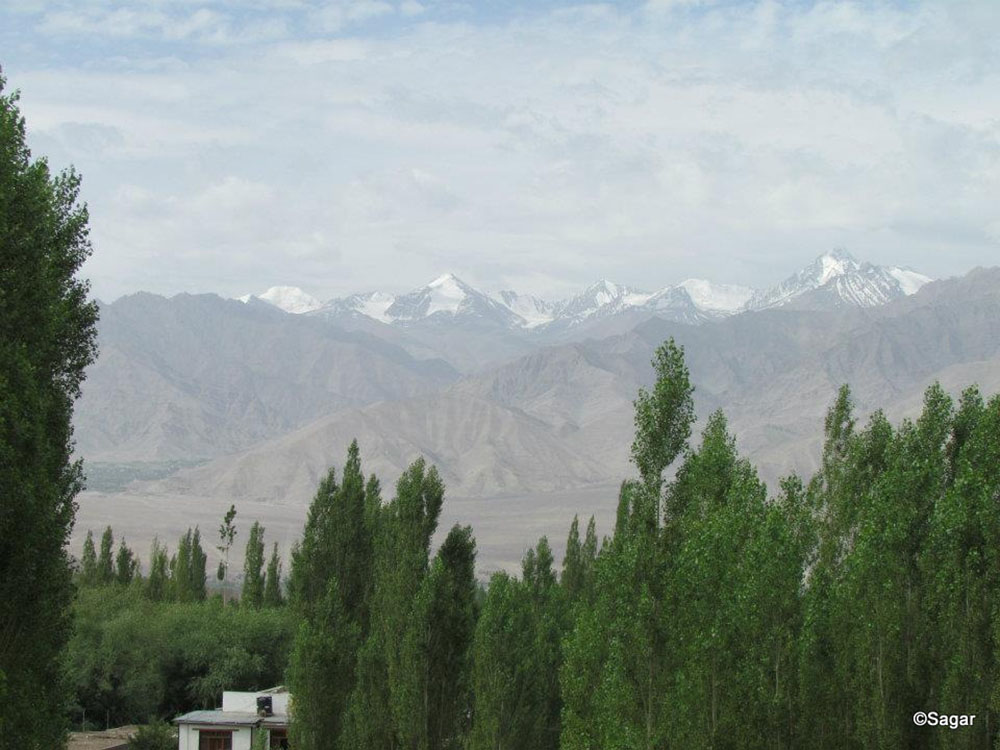 I knew that the tactics employed by Saurav had to be used if we stood any chance of getting the Chushul permits. The genius mind that he is, Saurav had written all the ‘normal’ places in huge block letters keeping places like Chushul and Marsimik La small to give a slip to the ‘busy’ human eye.

We did the same. Hell, we even wrote the names of places which we did not need to just to fill the paper up. The permit giver’s sharp eye was not to be fooled though, she immediately picked up the words Chushul, and without even asking us, simply crossed it off from the permit form in one swift movement.

Also Read: How to Arrange Inner Line Permits in Ladakh

Our hearts sank as her pen moved horizontally across the almost illegible letters that spelled Chushul, and just like a swift sword movement of a Samurai, all was over.

They say it is not easy to shut up a ‘true Punjab da puttar’ once he gets adamant on something. I witnessed that day how true that saying is. Yeshu was adamant about getting permits for Chushul and the lady behind the counter got flustered by his incessant questions regarding her decision to deny us the coveted permits.

Eventually, I think to get rid of us, she guided us to the ‘white-topi’ gentleman whom most of us must have met at the DC office in Leh. After exchanging pleasantries, he explained to us the reason for the denial of permits at length, the same story that has been doing the rounds on this forum.

He began by explaining why he too would want us to get permits for Chushul as it is good for tourism, and how it was convenient for tourists headed towards Hanle, but then also told us the reason for denying us permission. As many of us know by now, a couple of foolish bikers had crossed over the LAC into China near the Chushul war memorial and were found by the Chinese who then returned them to the Indian Army.

After the incident, he said, the senior-most officials at Leh, the DC, the ADC, the SP, the state tourism minister, ITBP, ITBF, and the Army decided in unison that Chushul permits would henceforth be completely banned. The only way, the white topi man explained, to stand a chance to get the permits would be by getting in touch with the SP and get his approval.

A ray of hope had sprung! We rushed to the SP office immediately only to find out that the SP had gone for Dalai Lama’s duty. Apparently, His Holiness was in town, and thereby all officials were busy facilitating his movement in Leh. No wonder, we had seen such a long line of common folk all the way from the petrol pump till the DC office queued up to catch a glimpse of His Holiness, the Dalai Lama.

A helpful lady at the SP office had informed us that it would have been difficult even for the SP to grant us permission for the Chushul sector as it was really not under his jurisdiction per se.

Also Read: Which is the Best Bike for Leh Ladakh Trip

We went back to the DC office to give it one last shot. The DC had gone to meet the Dalai Lama, but the ADC was still in her office. There was a certain venom with which she denied our request for Chushul, and that is when we understood that there was no point in wasting more time.

Disappointed, Yeshu and I headed towards Mr. Sharma’s workshop for the next order of business for the day. The boys were already done with their bikes and were headed back towards town for lunch.

When one travels in a car, the only activity one has to do at Leh, which is optional really, is to get it cleaned at Choglamsar. However, a bike must go for regular checkups as the strain on a 2 wheeler is much more. But before we could get the doctor to see the bike, the patient had to be cleansed.

The washing station was nearby and we were back in a jiffy. To our utter surprise, the supposedly least reliable bike of them all, Jugni, was in excellent condition. While the newest one on the block, WanderB, had suffered the most. The rear right shock absorber had breathed its last somewhere in the More plains. But still, it had somehow managed to reach Leh.

The carrier itself had broken and was down to 2 supports. Mr. Sharma explained that the installation of the carrier was improper resulting in damage to the shocks. The only solution was to replace the shock absorber, priced at 2200. That was done, along with welding to get the luggage carrier back in place.

Other than that, the bike was just fine. I said a silent thank you to the lord almighty that we made it despite all these odds.

When we were done with the bike, it was already late noon. We headed back to sync with the girls and grab a bite. It was disappointing to know that the entire town had gone ‘dry’ to pay respect to His Holiness. So there was no question of sourcing any form of meat, forget the delicacies which are liquid in nature.

After eating some leaves and shoots and getting some shopping done, all of us split in different directions for the evening. YeshuB and Gunjan headed towards Magnetic Hill for a late evening ride, whereas both of us went around town for some hotel hunting.

The hotel we were staying at was fine. But we wanted something better and since the Padma was not available. So, some other hotel which was affordable had to be found. This would also help in the longer run, with some future visits to Leh already on the drawing board.

We eventually found one on the Fort Road, close to the Padma, by the name of Kanishka. It was quite decent and carried a price tag of 2000 Rupees per day after some negotiations. It was booked for our return from Pangong Tso. 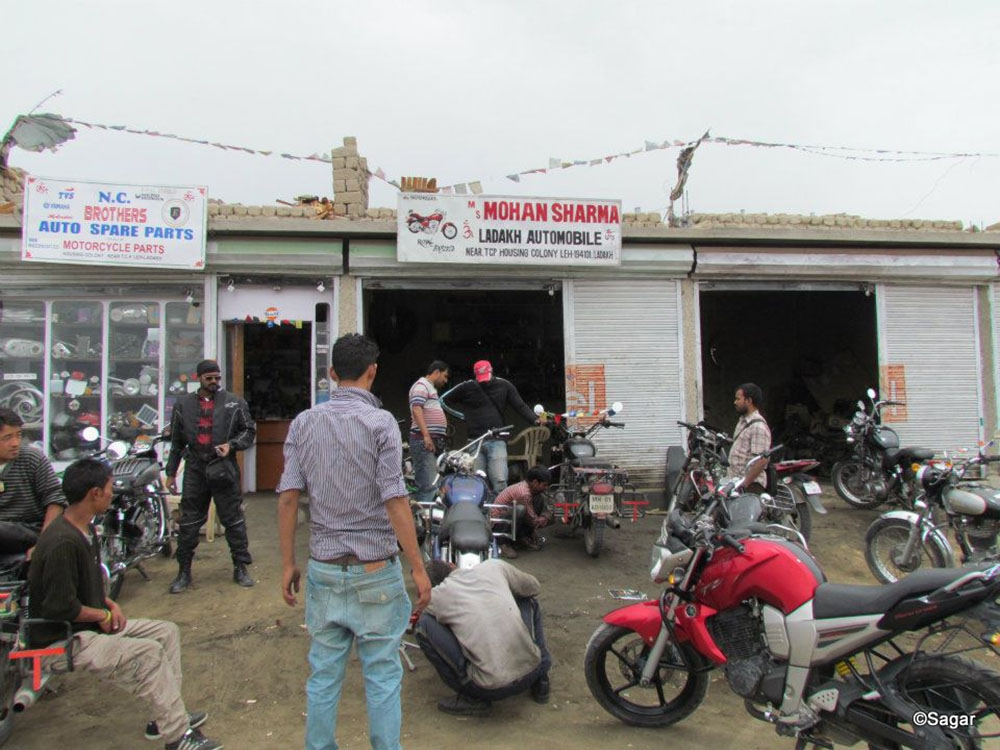 ​On our previous visits to Leh, we had always struggled with Leh city sightseeing in our Tata Safari, given its size and Leh’s parking scarcity. However, this time was different.

Zooming across Leh on our bike was an absolute delight. We decided that whenever we come here next, even if it is in Safari, we will rent a bike for whatever time period we’re in Leh.

At dinner, we all synced up and finalized the plan for the rest of the trip.

The remaining days were kept dynamic all the way to Delhi and were to be decided later. The plan seemed okay theoretically. The coordination would be a challenge of course, especially with all of us being so used to mobile phones these days.

But as Ladakh boasts of straight roads and single routes to these places, chances of getting lost were negligible. To add to that, now almost all villages in Ladakh have at least one satellite phone, so syncing up would not be much of a problem.

Excitement at its Peak

KD was really looking forward to the next day. On his first Leh trip, he did not even attempt going to Pangong Tso and returned via Srinagar. On the next one with Yeshu, Chang La baba got mad at him and a whiteout happened at the top, forcing them to return.

The third time around we sent KD and Sagar to Pangong Tso from Nubra via the Agham – Shayok route, where they got stranded with a torn apart Ford Fiesta (of a friend), which eventually had to be sent back in a body bag to Chandigarh. So after being 3 times unlucky, the expectation from the ever color-changing lake and the ride to it was high.

I was looking forward to it too. Despite this being my 3rd trip to Ladakh, I still had not been to Chang La Pass. In fact, none of us had, except Aarti who had crossed it when she’d visited Ladakh with her parents.

And so we all went to bed, dreaming of the blue-ness of Pangong, and dreading the harshness of Chang La. Please click on the link above to continue reading the next part of the travelogue.

I hope the information provided so far in the travelogue in reaching Ladakh and Leh City sightseeing was of help. If you have any questions or need any other details, please feel free to ask in the comments section below or at our Community Forum, and I will be glad to help.