First things first. Though I am a huge horror fan, I never would probably have watched The Maid. Even the very poster of the movie looks discouraging. I noticed it on Netflix when it was released but mistook it for a Japanese Horror movie that I had already seen. But the same evening, a friend of mine talked to me about it and highly recommended giving it a try.

On his recommendation, I watched the movie. Or maybe the correct words are that I tried watching the movie because after a little while later, it became unbearable. After the movie ended, the first thing I did was to call my friend and give him an earful for recommending this trash to me. That is how bad it is.

There really is not much to talk about this movie anyway so I will keep the review short. The Maid is a 2020 Thai drama horror slasher film that was released on Netflix in July 2020. It tells the story of a teenage girl who gets employed as a domestic maid by a rich family. In the house, she soon starts to get haunted by the spirit of a previous maid who died there. She starts digging to investigate and to discover the secret behind her death. 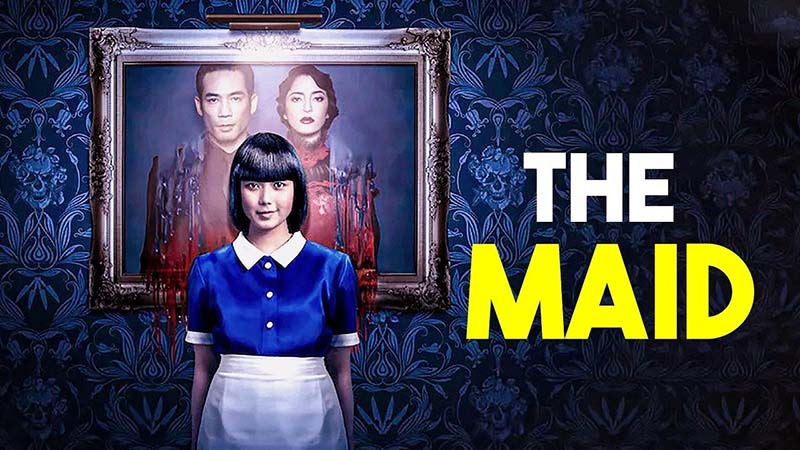 This one is supposed to be a mix of horror, thriller, slasher, and whodunit but fails at being anything at all. The best you get are a couple of jump scares and that is pretty much it. The acting was absolutely pathetic, the screenplay was poor and the direction flawed. Even the ghost looked more funny than scary.

It is one of those typical horror movies with all the horror clichés, boring story, and uninteresting characters. From the first look, you can tell that they tried to copy everything from Hollywood and Japanese horror movies.

There are a lot of parts that made no sense. If the ghost was the maid’s sister, then why was she trying to scare her? How come the maid was sleeping with both the husband and wife of the mansion? What was her motive? She gives birth to a child from her master and his wife has no problem? Does she really accidentally dies or was she killed? If the wife really had no problem then why did they bury her alive?

The biggest of all. How does a teenage girl manage to kill 50 people in the same room with nothing but a knife? So basically she just takes the knife out and starts slashing around. No one fights back, everyone runs around and she overpowers them all. Why did the hell did she kill all those people is not explained either.

As I said, this is one of the weirdest and stupidest movies I have ever seen. It is just a non-stop series of annoying characters doing stupid things for no rhyme or reason. The story had absolutely no head and tail. This is the first anything Thai that I had seen and possibly the last as well.