The first thing that I did after watching The Penalty on Netflix was to call my friend who recommended me this movie and give him an earful. As it turned out, it was a prank that he played on me, tricking me into watching it. This should pretty much summarize the entire review. This is one of those movies that are so bad that after watching them, you want to get your friends to watch them as a prank.

The premise of the movie looks promising and the first 15-20 minutes are actually good. So when I started watching it, my interest built up almost immediately. Unfortunately, after the initial 15 minutes, it is all downhill. You will stick with the movie for maybe about 15-20 minutes more and then will start to get the urge to either stop or to fast forward. The idea of the movie was good but the execution was really pathetic. 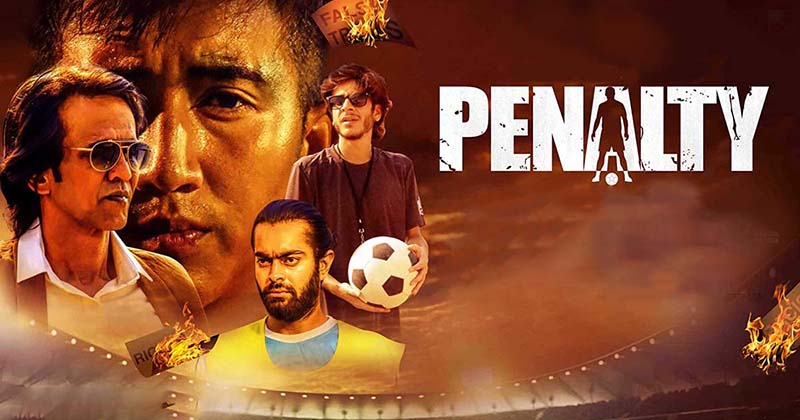 The movie Penalty is supposed to be about football and discrimination in Indian society against northeastern people. It tells the story of a young boy from Manipur, Lukram, who enrolls himself in a Lucknow-based college to realize his dream of playing football for the Indian national team. Supposedly, the college that he joins has been the national champion for several years and is the dream of anyone wanting to play football professionally.

Unfortunately for Lukram, things are not easy. He is discriminated against by the selection committee and has to fight hard to secure his spot in the team. He is tagged as an ‘outsider’ that no one wants in the team. At every step, he faces unabashed racism to the extent that he almost gives up.

There are two good things about this movie. The first one is Kay Kay Menon. I think the only reason anyone bothered to see this movie was his face on the poster. If it wasn’t for him, this movie would have gone unnoticed completely. The only and little viewership it received was just because of Kay Kay Menon.

The second good thing is Manjot Singh. He is a pleasure to watch throughout the movie. The first 15 minutes that I said were good was only because of him. His light-hearted comedy, expressions, and dialogues were really fun. I think he received more screen time than Kay Kay but justified his role completely.

Other than these two, there is nothing good in Penalty. Acting, direction, dialogues, cinematography, and just about everything is a complete failure. The lead actor, Lukram Smil, knows nothing about either acting or football.

The movie is about football but it seems they neither did any homework about the sport nor train their actors to look like real football players. North Easterns are not discriminated against in football at all. They are among the top football players in the country. Secondly, selecting Uttar Pradesh as a football-playing state? Seriously? I am from Uttar Pradesh myself and Kabaddi or Kushti would have suited more as a theme than football.

Kay Kay Menon and Manjot did what they could but they alone cannot support such a weak script. Everything looks amateurish including the setting of the college, football team, ground, coaching, and the final matches. I understand they may have had a low budget but at the least, the attempt could have looked genuine and not fake. They should really have watched a few Hollywood movies like Coach Carter and take some tips from there.

The movie has its heart in the right place and tries to showcase the Northeast-related problems. However, the poor representation, bad dialogues, unrealistic setting, flawed direction, and weak acting by the entire cast really failed to convey the authenticity. The football actions are awfully shot, the dribbling is laughable, the goalkeeping is non-existent, and the camerawork/editing doesn’t do much to disguise the lack of professionalism. The music was just about average. Even if you were a fan of Kay Kay, I will still ask that you do not watch this movie.