This post is in continuation with a previous one and part of my Cambodia Travelogue. Details and pictures below are of the several temples that we visited at Angkor Wat on our second day in Cambodia. To read the previous part of this travelogue, please click on the link below.

Journey So Far: The Smiling Faces of Bayon, Cambodia

8:15AM: Now it’s time for breakfast. Finding your Tuktuk driver ( if you do not have a local sim) is a bit tricky,but in 99.9% cases the Tuktuk driver will find you! (We were the unlucky 0.1% , however a fellow Tuktuk driver helped us out). To dodge the crowd (who were headed to Bayon), we went in the opposite direction towards Ta Phrom.

8:30 AM: Before Ta Phrom is the Royal bath Sra Srang (a ornamated bathing ghat with a giant pool) and the Baentey Kadei just opposite to it. 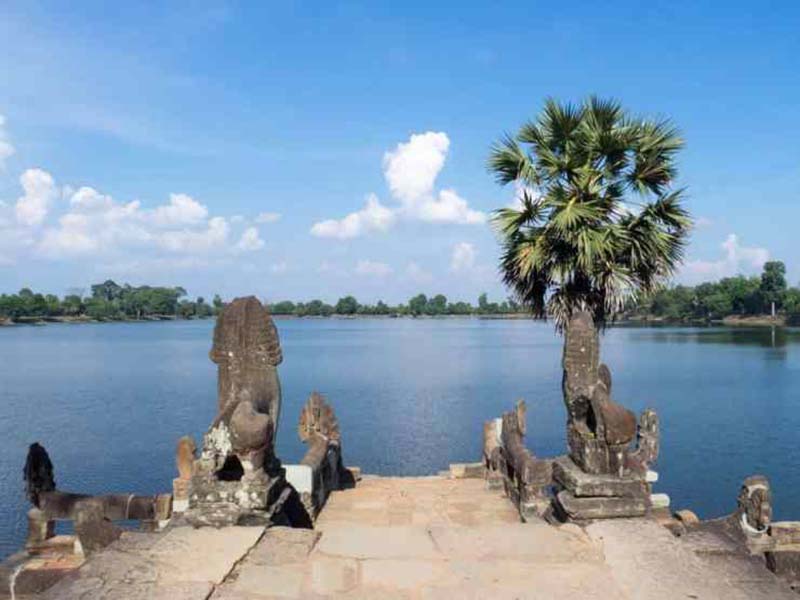 The Eastern Gate of Banteay Kdei-Baenteay Kdei was built by Jayavarman VII,who succeeded Suryavaran II . A recurring theme in his construction is the face of Avalokiteswara and scenes from Samudramanthan. 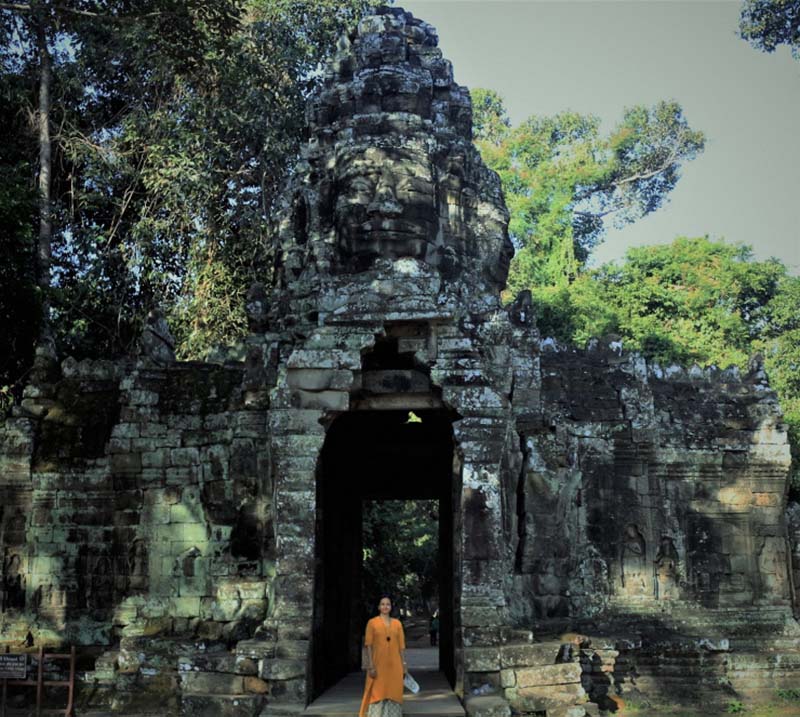 The entrance to the Banteay Kdei… flanked by the Naga and the Lion! 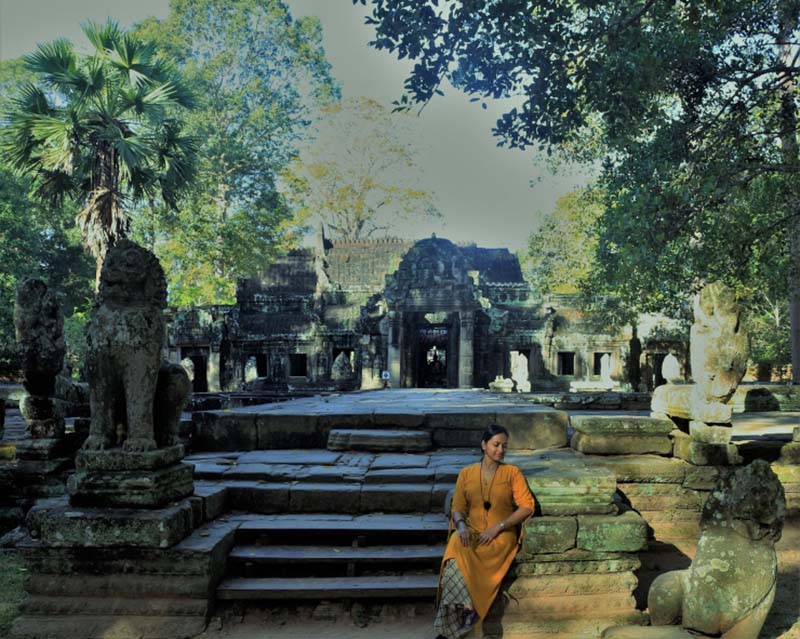 The Nagas, and the thached roof like architecture. Can you see the persons with swords besides the gates – the Dwarpalikas? 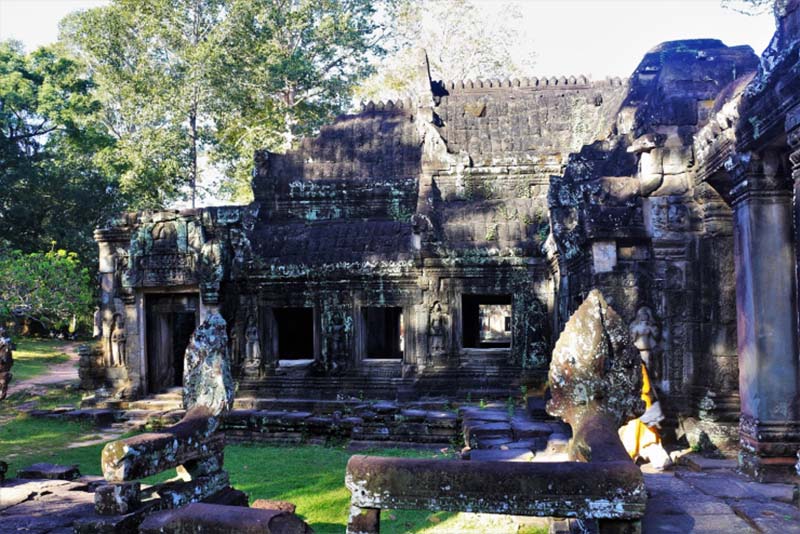 Meaning the citadel of Monks; Baenty Kdei was built as a Buddhist temple(on a much earlier Hindu temple). Much of this temple is engulfed by the forest,with the soft morning light through the leaves making an interesting patterns on the moss layered green stone slabs. 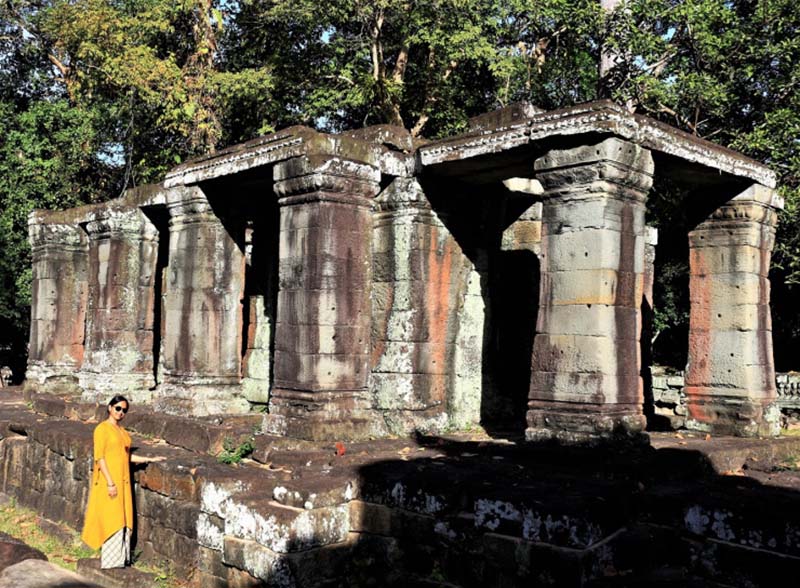 Apsara-pure bliss on the pillars 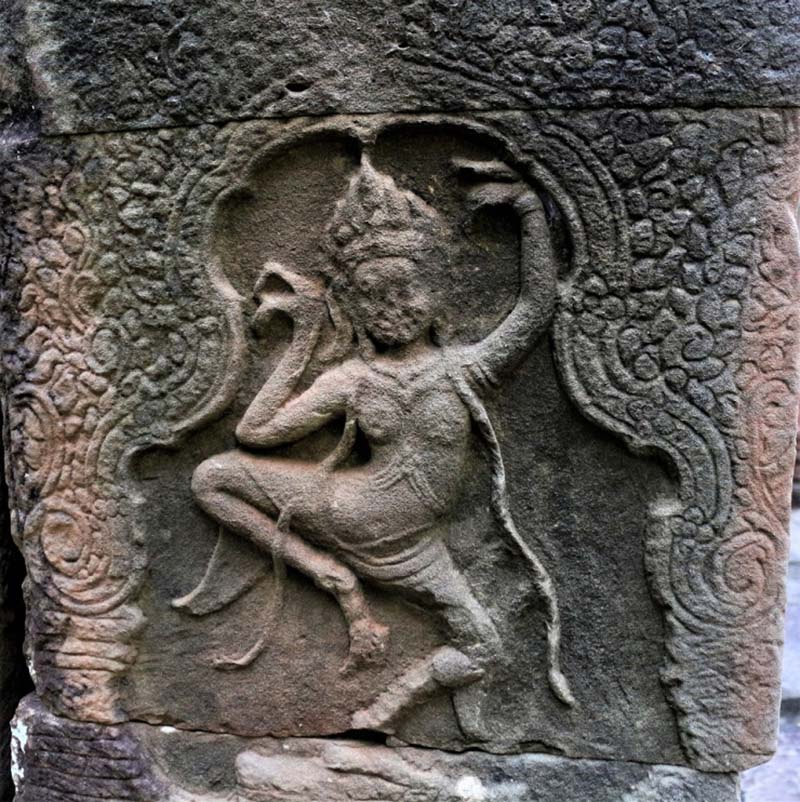 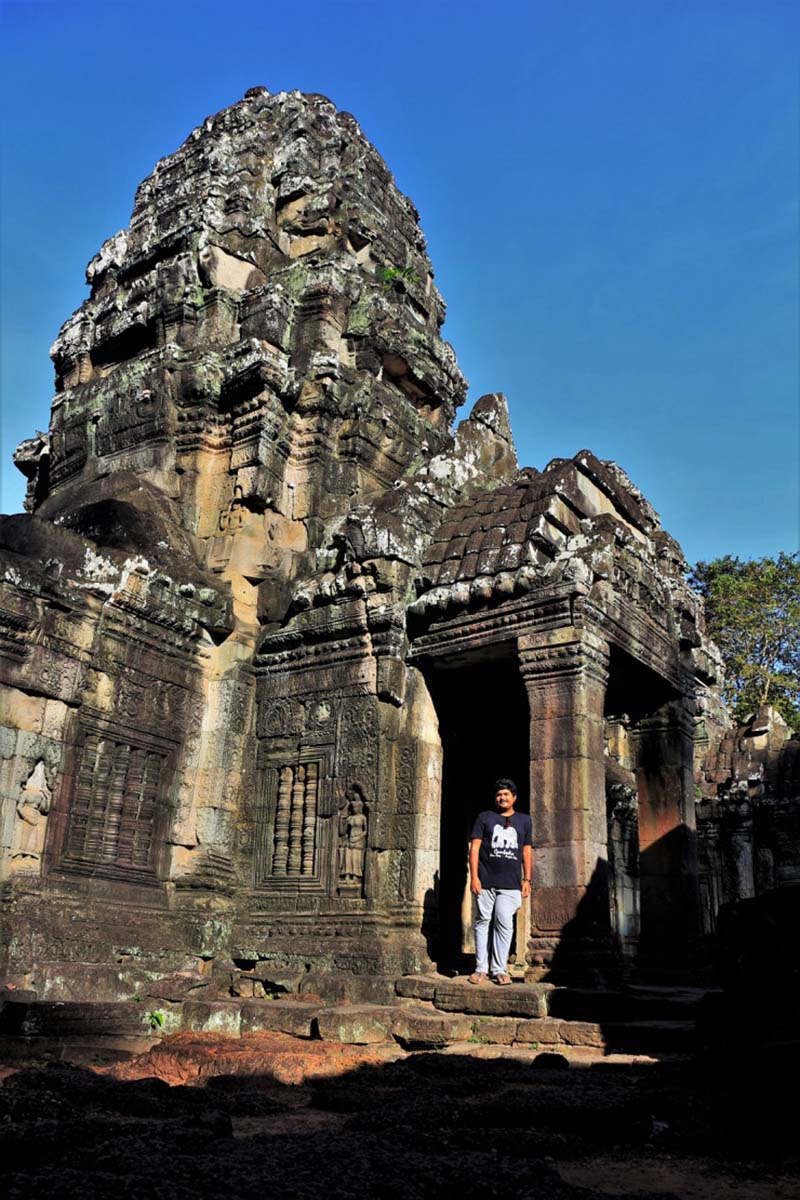 The forest engulfing the ruins of Banteay Kdei-western gate 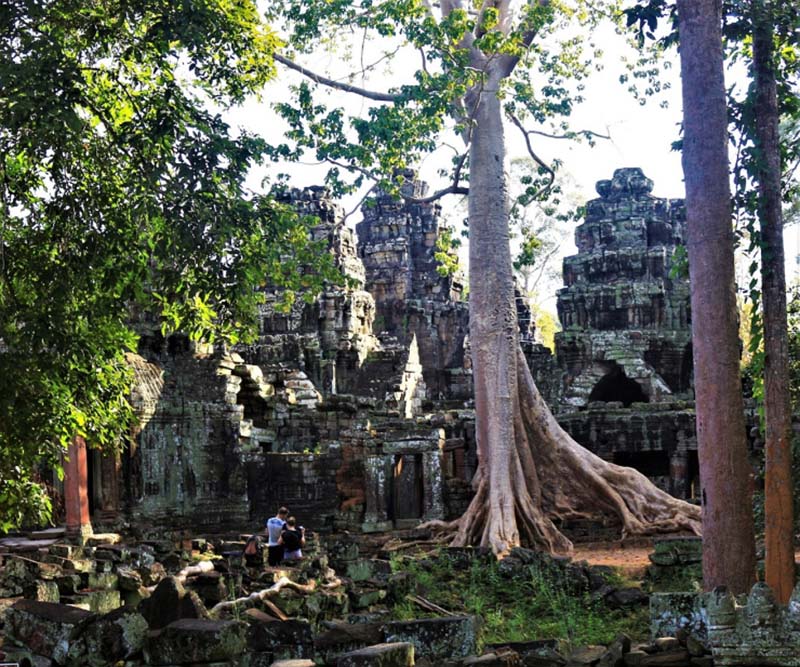 Sorry guys, this is not the Western gate of Banteay Kdei. It is the Eastern gate of Ta Phrom( no marks for guessing who built it!) You can see the smiling face of Avalokiteswara,and a Gaduda (winged Bird mam) and Apsara on the Eastside 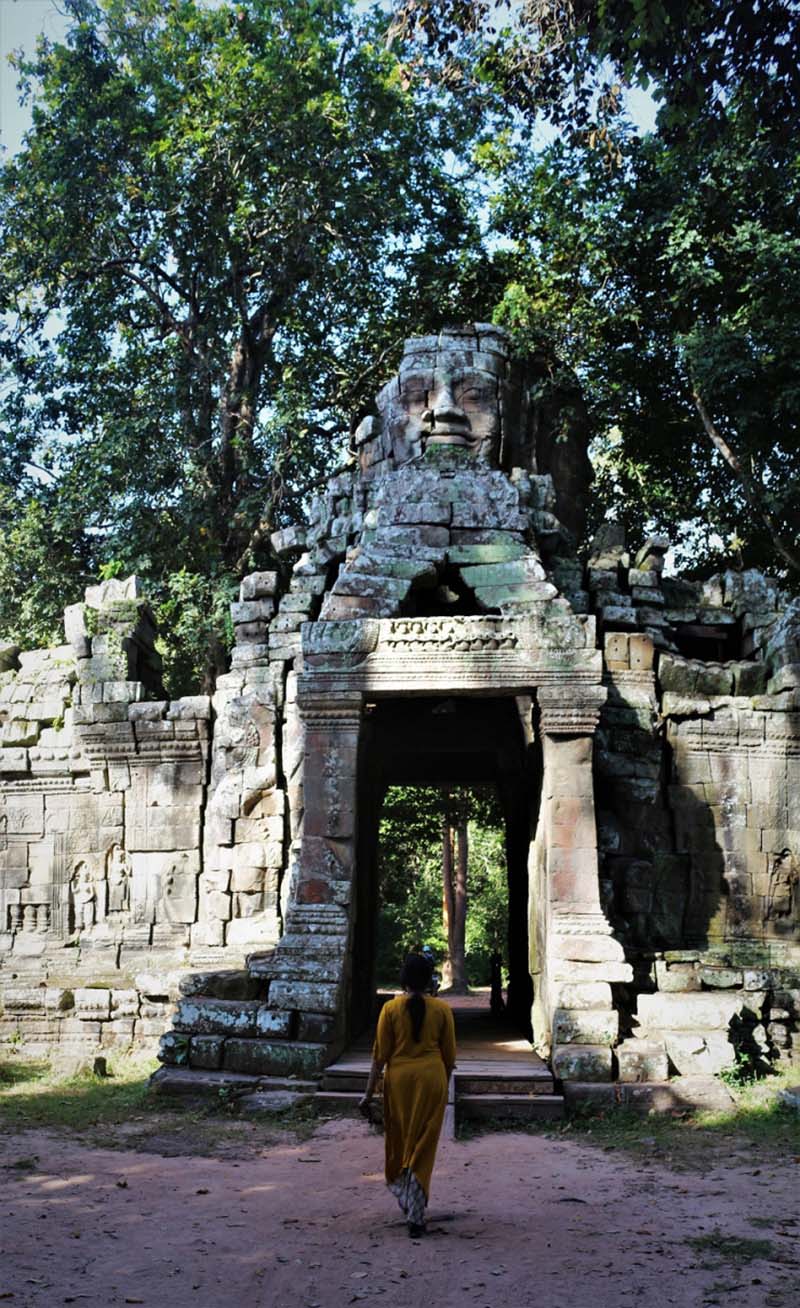 Ta Phrom( Rajvihara, dedicated to Jayavarman II’s mother……my wife was impressed by this fact) is popularly known as the temple of Tomb Raider Lara Croft. 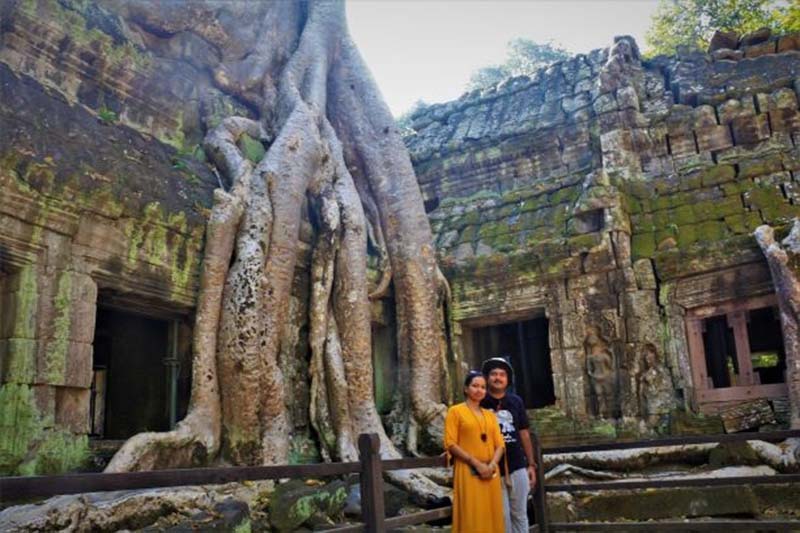 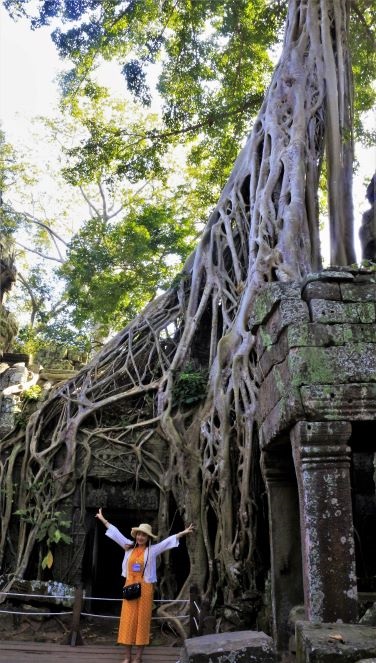 Nature will have the last laugh. (However, the recent conservation efforts have cleared the jungle and made it less romantic) 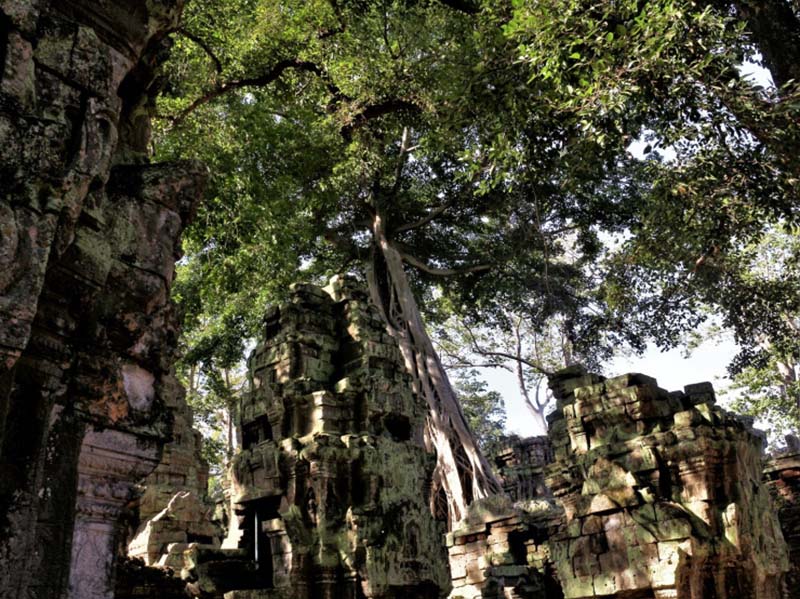 Rajvihara- where kings came for a stroll 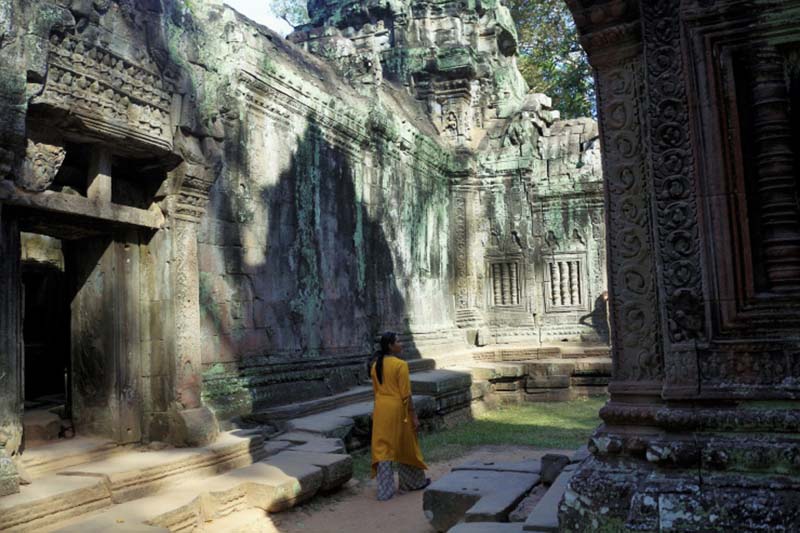 10:30AM: Now a long detour ( leaving the major and minor circuit) to visit Banteay Srei . On the way, you can see the Pre Rup ( pyramid shaped temple ,built by Rajendravarman II and was the Royal crematorium) 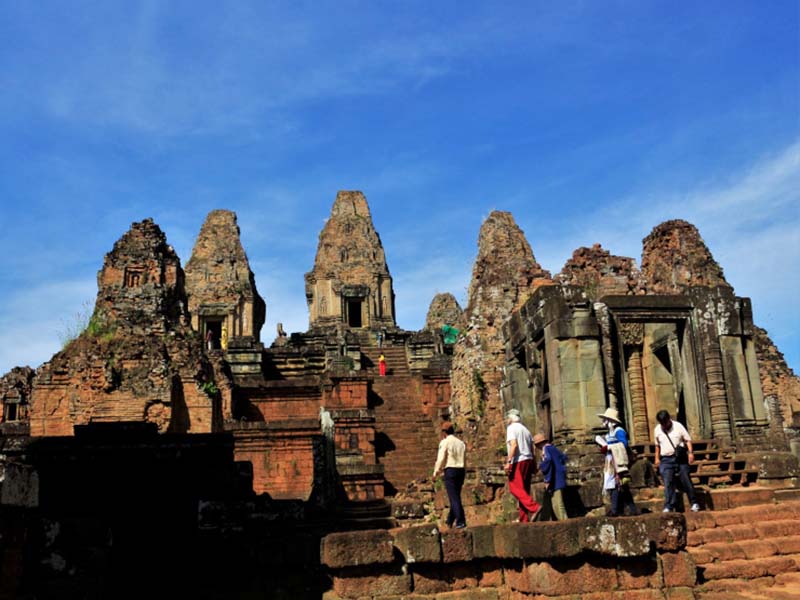 The journey to Banteay Srei is a long one (half an hour one way). Enjoy the countryside or take a quick nap while stretching your legs. You can pay a quick visit to the Landmine museum (where they train rats to detect to these deadly bombs which are abundant in the Cambodian countryside– so watch before you leap on the offbeat path !)

Two interesting observations- the roads and the toilets. The roads of the major and minor circuit are world class, with free (for ticket holders, and paid for all others including Cambodians) clean airport style toilets near all major temple complexes. Also, there are no hagging by Tuktuk driver, souvenir shops or guides to take their service. Although begging is strictly discouraged, you can see some handicapped landmine victims playing traditional instruments and asking for a small donation. You can also buy karma, by donating to the monks. 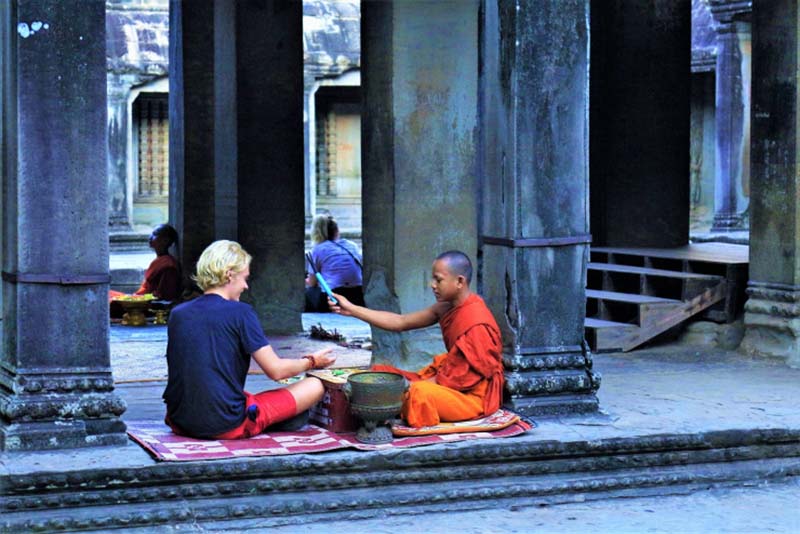 11:00 AM: Baenty Srei, the kohinoor of Angkor was built as a Shiva temple by a Brahman ( the Tutor of Jayavarman V,in late 9th century, older than the Angkor Wat).It is a small temple,but what it lacks in size ( compared to it’s big brothers Angkor Wat and Bayon), it compensates with it’s intricate designs and craftsmanship. Such is the beauty that it is called Banteay Srei (citadel of women; because only the fine fingers of women can create such magic on stone)

Baentey Srei- if Angkor Wat is the Goliath of Angkor architecture, then Baentey Srei is the David 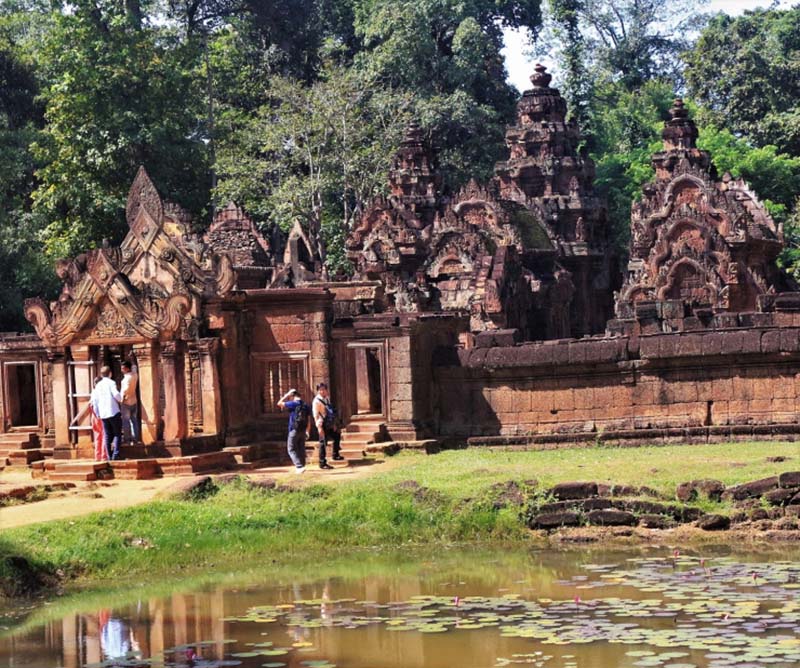 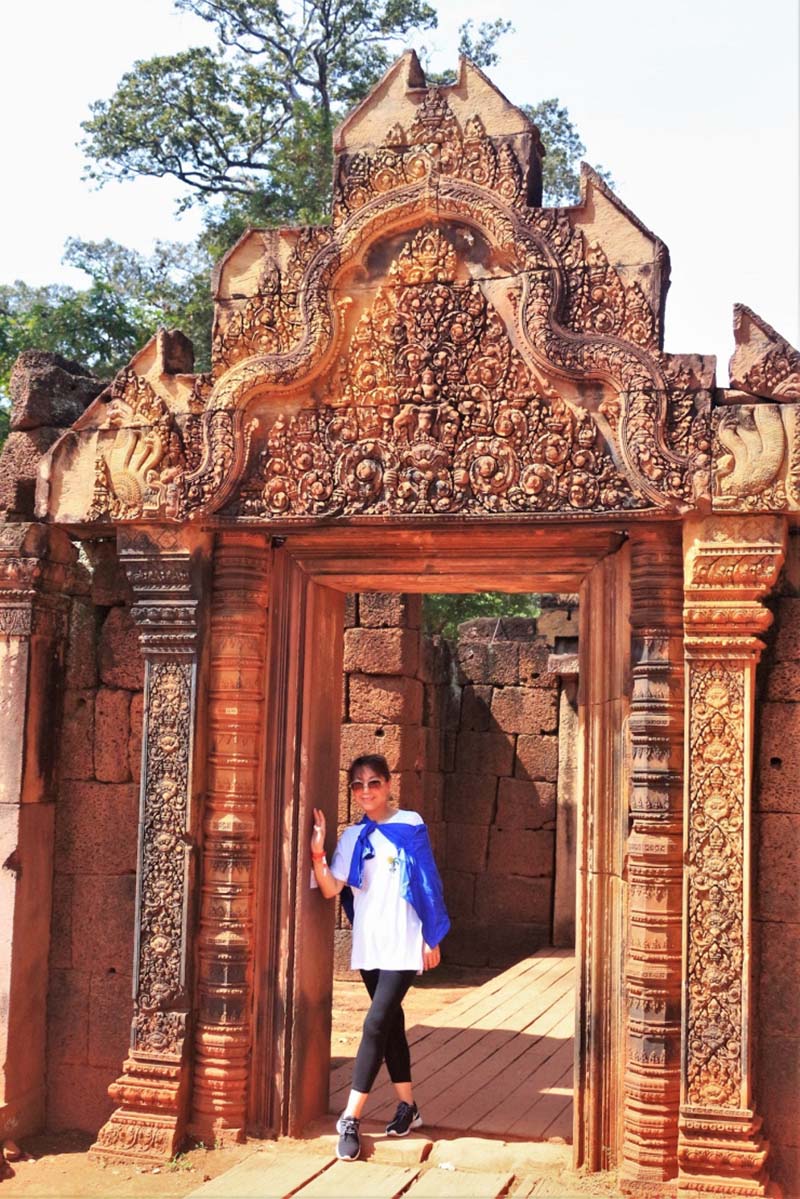 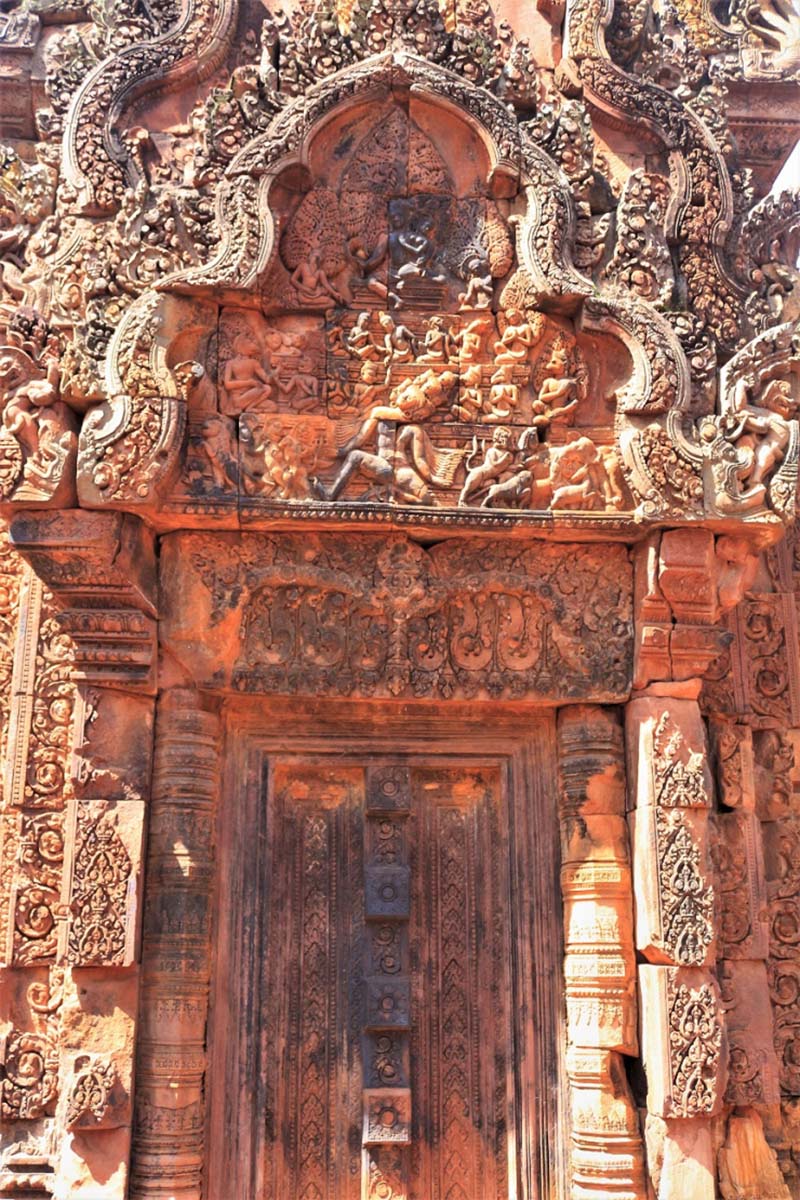 Indra on his Airavat! 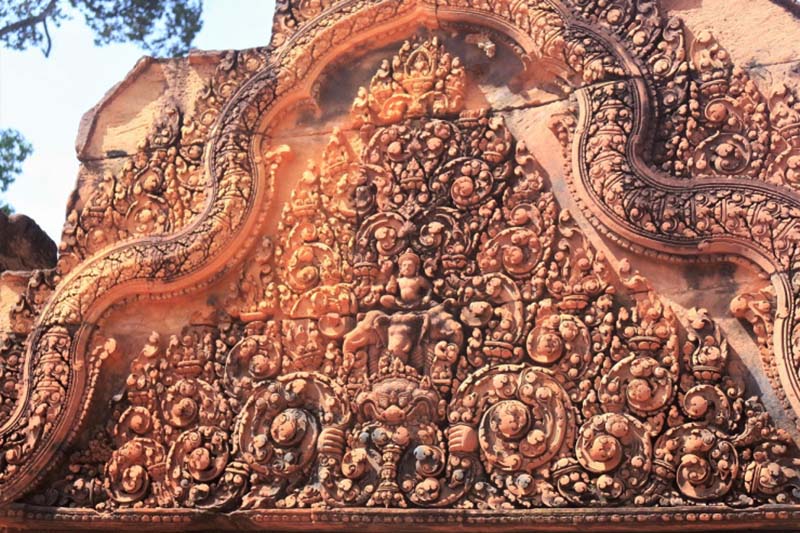 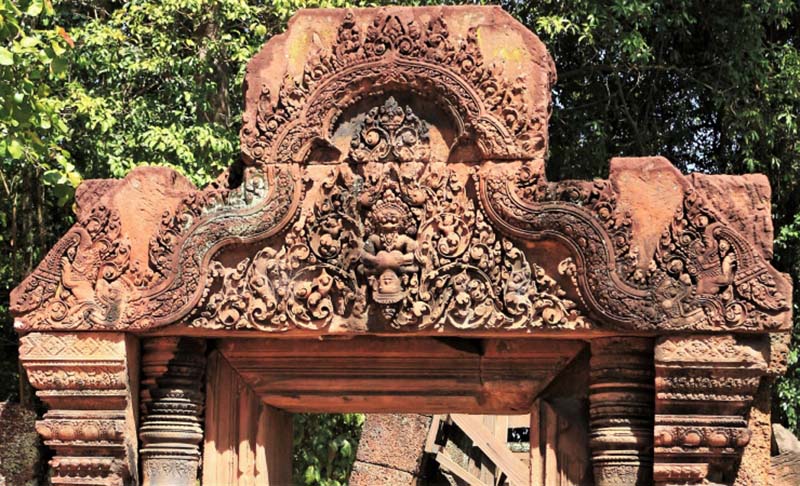 Note the different patterns of gates 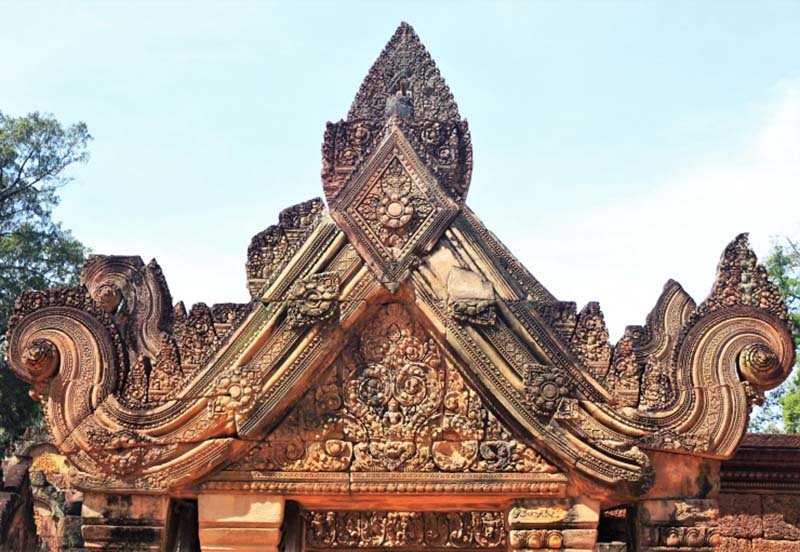 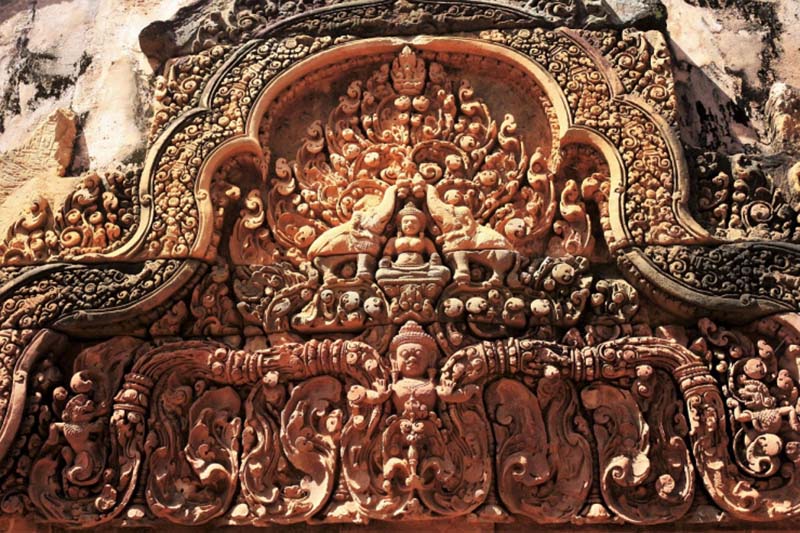 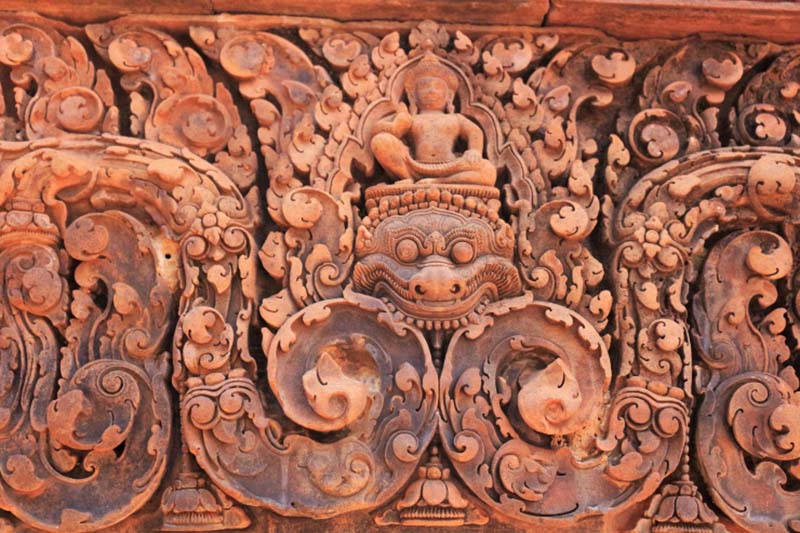 Ravana praying to Shiva( note that in the lower panel the earthly beasts are frightened of Ravana, the upper panel of Rishi’s are perplexed,while the top most panel of Ganesh(with an elephant head), Gaduda( Bird head) and Dakshya Prajapati ( goat head) are undisturbed. Parvati is seated on the left lap of Shiva 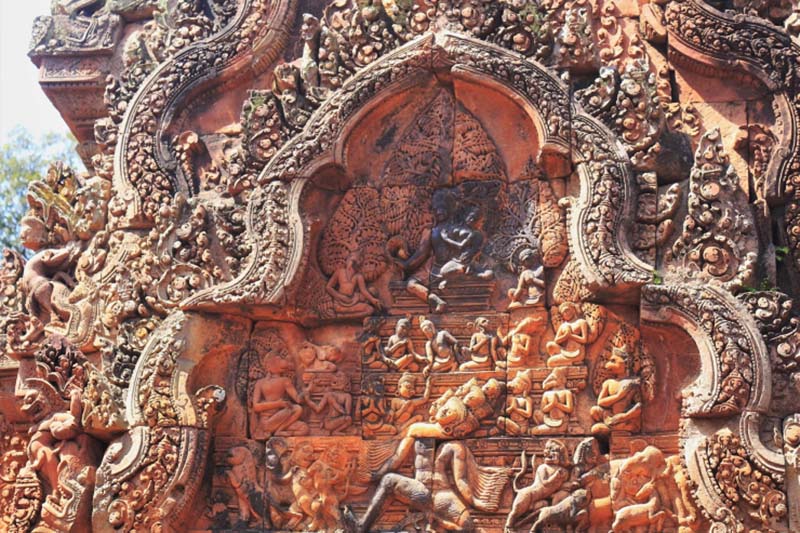 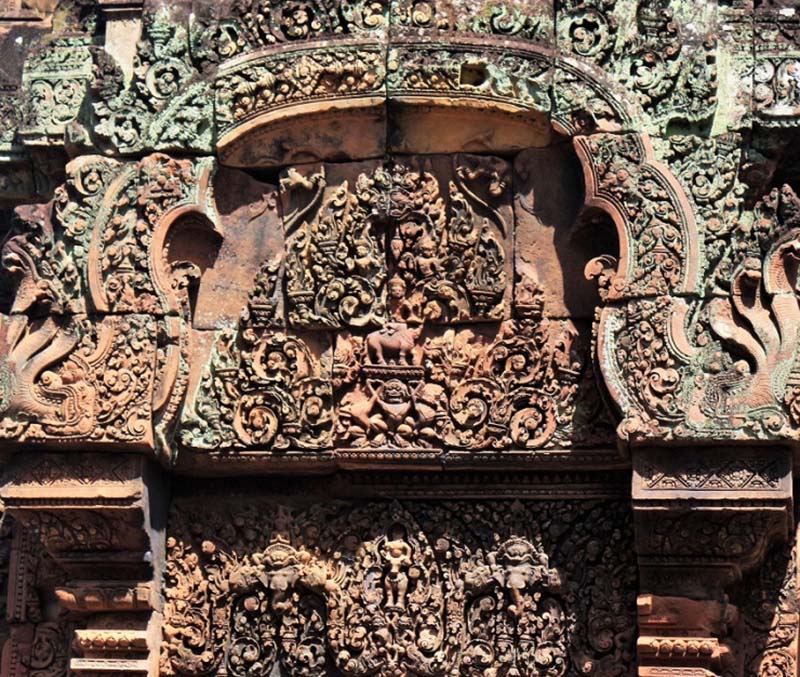 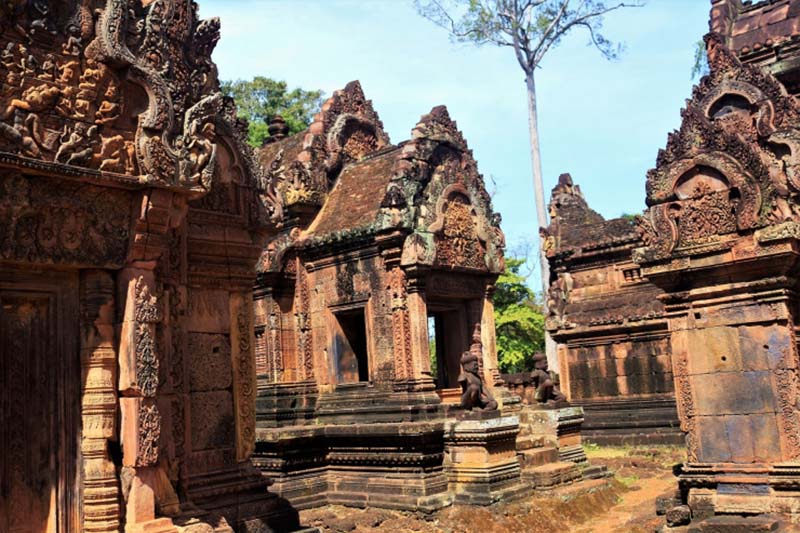 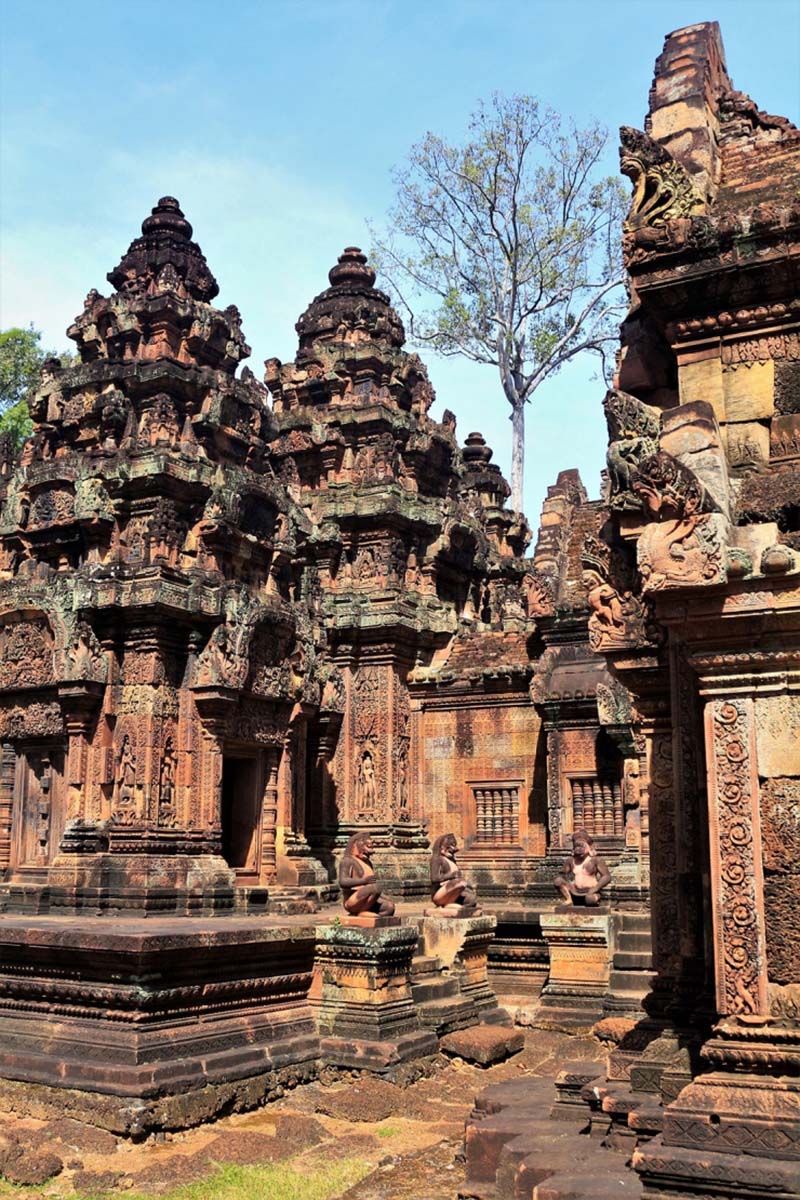 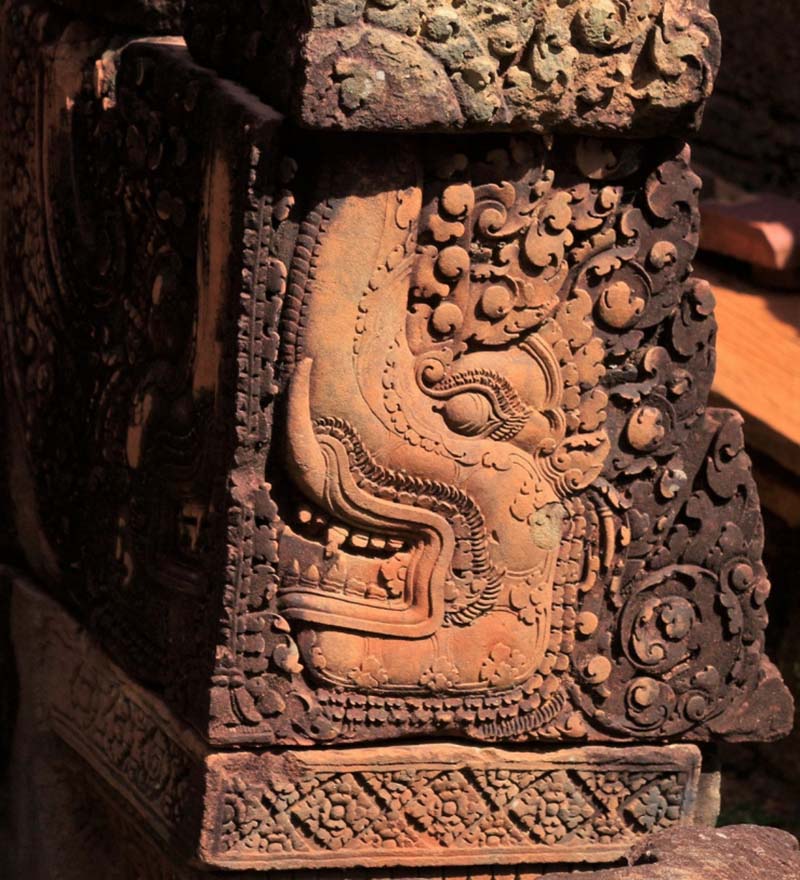 12:00 PM: Another 40 mins ride back to the major circuit. We took a small nap in the Tuktuk

12:50 PM: With the merciless noon sun already reducing our morning josh to 50%, we needed some refreshments and shade to incraese our blood sugar and some spirits to raise our spirit. But before that I decided to check out the large Shiva stupa of the Preah Khan( sacred sword). This temple was originally built as a temporary royal residence of Jayavarman VII( while the Angkor Thom was being built),but later served as a place of worship for Mahayana Buddhist, Shiva,Brahma and Bishnu– a sort of religious fusion,evident in its archaeological style.

The eastern gate of Preah Kahn- the right and the left of the path are flanked by naga balustratade, with the right pulled by devas and left by Asuras (scene from Samudramanthan. You can guess who built it!) 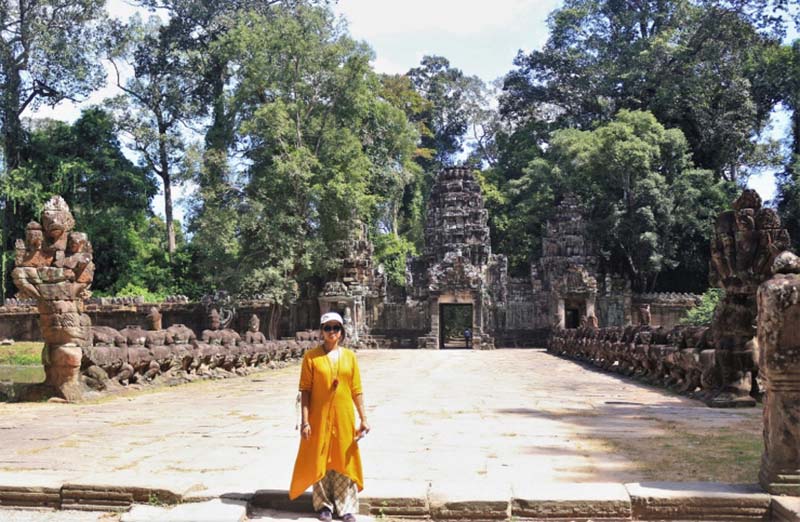 The entrance to Preah Kahn.Note the two beheaded dwarpalikas on both sides 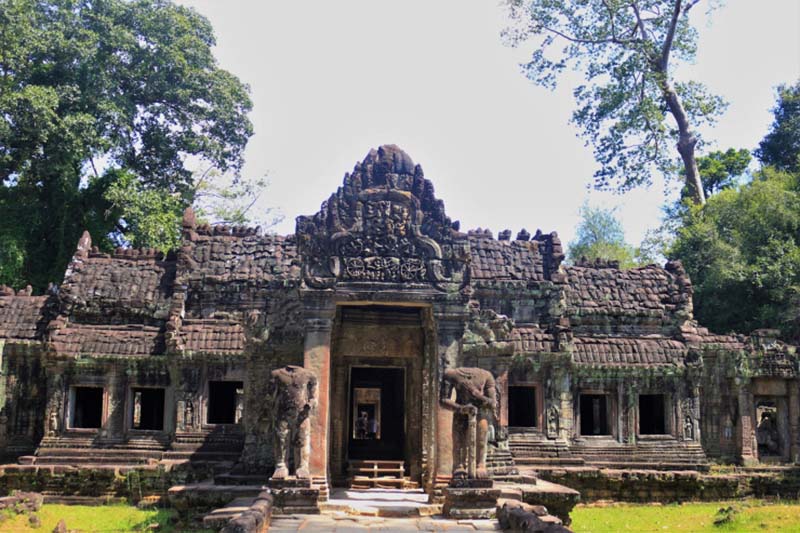 I hope you liked and pictures and the travelogue above was of help. Please read Angkora Wat Temples – Majestic and Magnificent to continue reading the next part of this travelogue. If you have any questions; or need any further details about visiting Angkora Wat, please feel free to ask in the comments section below; or at our Community Forum; and I will be glad to answer.

Sayantan is a doctor by profession. He loves to travel around whenever he can and hear new stories.