Continuing from the last article where I talked about how you can plan a trip to Manali; in this post, I will provide details on taxi rates in Manali. The information below will include charges you will pay for hiring a cab for local sightseeing in Manali; as well as taking a cab from Manali to another town or vice versa.

Please note that Manali taxi rates depend highly on the month of your travel. During the peak tourist season, as the demand for taxis goes up, these per-day charges can seem to touch the sky all of a sudden. Another thing to note is that there is no such thing as “fixed rates” in Manali. It all depends on the season, demand, and your own negotiation skills.

For booking a taxi in Manali, you can contact Kunal @ 9910 402 252. Give my reference and you will surely get a discounted and best available rate.

Also Read: How to Plan a Trip to Manali – A Complete Travel Guide

If one was to list down the most visited tourist destinations of our country, I am sure the name of Manali will remain among the top ones. The tourist footfall here remains throughout the year and it never really is an off-season. No matter which month you arrive, you will always find tourists in Manali.

Due to this very fact, the rates of taxis in Manali can sound ridiculously high to some people. Hence, the best way to travel to Manali is always by your own vehicle. But if that is not a choice for you, then you can easily rent a taxi for or from Manali. How much it will cost you is what I will discuss in this post.

Types of Taxi in Manali

There are four different kinds of taxis available in Manali and the rate is different for all of them.

The rates I have mentioned below are broken down into these categories. So the first column is for Alto, the second for Dzire or Etios, the third for Sumo, Bolero, or Tavera, and the last one for Innova or Scorpio.

Please note that the figures below are approximate and not absolute. Taxi rates in Manali are highly prone to change depending upon the time of your arrival and negotiation skills. 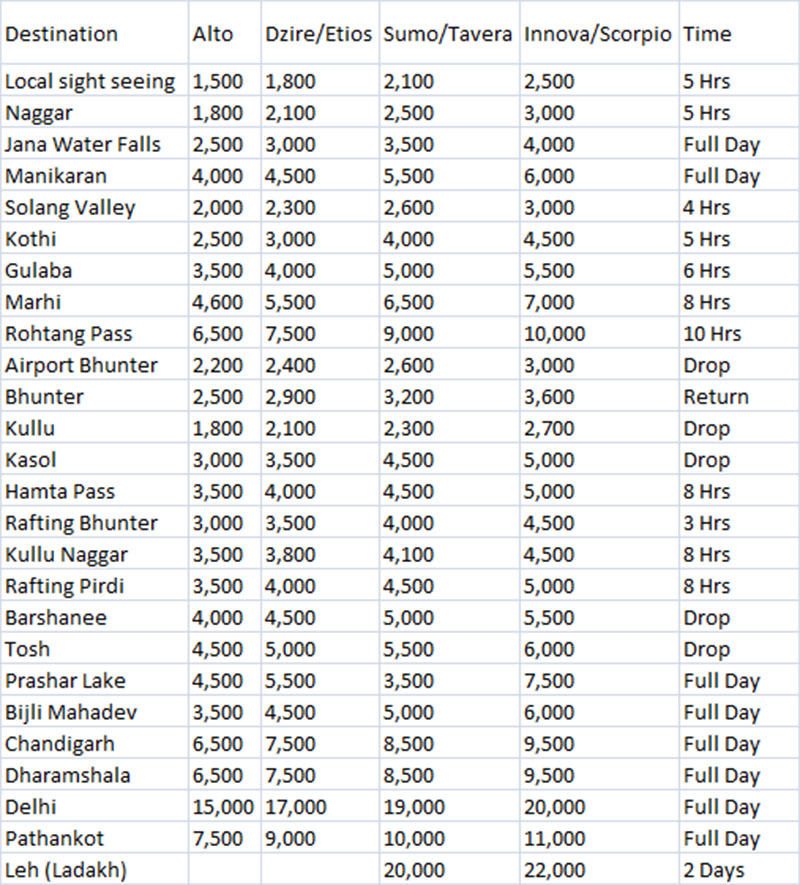 A few more details on the rate list above are as mentioned below.

Rohtang Pass, beyond any doubt, is the biggest attraction of a trip to Manali. The pass remains open from the month of May till September and is a beauty in itself. Almost every tourist that arrives in Manali travels to Rohtang.

So high the number of people going to the pass became that authorities have to take action and introduce a permit, thus capping the limit of tourists to the pass in a day. Due to this, the demand for a taxi traveling to the pass is very high and so is the price.

During the months of May and June, a trip to Rohtang Pass will cost you between Rs. 10,000 to Rs. 12,000 for a simple Alto. The destination is only 50 kilometers but due to the long traffic jams and slow traffic, this trip will eat up your entire day. During the off-season, the fare drops down to Rs. 5000 or Rs. 6000.

This will be a little hard to find really due to the whole concept of the permit. You can try talking to a travel agent or a taxi driver in Manali and see if they can club you with some other group. The fare will entirely depend upon your negotiation.

Renting a taxi for a few hours to show you around in Manali will cost about Rs. 2000 to Rs. 3000. Please note though that they will just move you around in the town itself and will not travel towards Solang, Gulaba, Rohtang, or any other tourist spot outside Manali.

A taxi between Manali and Bhuntar will cost you about Rs. 3,000 approximately.

A full-day trip from Manali to Manikaran Sahib will cost Rs. 6,000 per day.

This will be a total trip of about 4 to 5 hours. The taxi fare will be between Rs. 2,000 to Rs. 3,000. The taxi will bring you to Solang Valley from Manali, show you around, and drop you back at the hotel.

A private taxi from Manali to Kasol or vice versa will cost about Rs. 4,000 for an Alto.

Depending on which type of cab you chose, a private taxi from Manali to Chandigarh or vice versa will cost between Rs. 7,000 to Rs. 10,000.

A drop to Manali from Delhi or the other way around will cost you between Rs. 15,000 to Rs. 20,000. The journey will easily take about 14 to 15 hours depending upon the traffic, your breaks, and speed.

A taxi from Manali to Pathankot will cost about Rs. 8000 to Rs. 9000. The price can be slightly less if you were boarding a cab from Pathankot to Manali.

This will be a 2 days journey with a night halt at either Keylong or Jispa. The total fare will be about Rs. 20,000 for a private taxi.

The fare per person for Manali to Leh by shared taxi will be about Rs. 2,000 to Rs. 2,500. You can find these shared cabs at the Manali taxi stand only. Do keep in mind that they drive non-stop to Leh city with no halt in between. The journey usually is of around 18 to 20 hours of a cannonball run.

I hope the information above on taxi rates in Manali was of help.  If you have any questions, you can ask in the comments section below. You can also contact me on Instagram to chat with me or subscribe to my YouTube channel and ask a question there.

what is the per day taxi rate in Manali ? How many Kms it covers? Can you help me in getting a car from Gramphoo for my journey towards Triloknath and Udaipur and if possible Manikaran on 12th of September? Actually I am on a group tour of Spiti region and simultaneously want to visit the mentioned spots during the group’s stay in Manali

Hi, I am going to Kaza from Manali by bus(Head 2), in mid-Sept 2022,
Can I get a taxi only for the Kaza sightscreen from Kaza taxi stand??? Any idea Approx how much the change for per day sightscreen(visit key monastery, Kibber, Langza, Hikkim etc.).
Thanks

Dear Vargiskhan
It’s real nice to see ur guidance for Spiti. Retd from Bank as AGM, I go there one a year for one month ( this year going in next month) where I teach tribal children of +1 and +2 commerce. (Govt school Kaza has no teacher of Accounts and Business Studies)

As someone has asked shared taxi/ tempo traveller charges from Manali to Kaza, these are 1400/- per person presently. One bus also goes( fare around 500/-), but it is fully packed.
This route opens only in mid/last May and is upto September end or October start.

Thank you so much for your kind words and for adding the information Mr. Sharma. I appreciate it.

Hi, thanks for the information. Do you have any idea of of the cost for booking a jeep/tempo traveller from Manali to Miyar Valley? Would be grateful if you could you please share the number of any contact you have for this.

Can I hire SUV from Manali for Zanskar upto Padum via Srinkula pass?

I would be spending one whole day in Manali, around 7th of October. Is it possible to cover Rohtang Pass, considering there might be snowfall around that time. Also, since I am on a budget tour, I would prefer taking public transport (to and fro) or even shared cabs/ shared taxi packages.

Hi i am planning to visit Kaza in month of july. Can you tell me estimated shared taxi price

Manali to Kaza can cost you anywhere between Rs. 400 to Rs. 500 per person for a shared cab.

Hello salam vargis , 2 Years ago we visited Kaza from manali by Shared taxi and we Paid to Rs 800 per persons

Can you get shared taxi number to going kaza from Manali ? Which Fare between Rs 800 to Rs 1000
I lost contact number,, will you give it ?

Hey hi bro did you get any connectivity of shared taxi ?? I need to visit on month of aug

I need a 4*4 wheel car to visit Manali to Hampta pass. what is the price for a 1-day trip

Hi I am going to Manali with my wife,in mid Feb 2020, is it right time???
Is there any sharing taxi ??? Because we are only a couple , going to travel with out any package

It will be very cold in Feb but yes, it is a good time to be there. There are no shared taxi there though.

I wish to travel from Manalii to Leh in a leisurely manner. Can you suggest at which town I have to stop for overnight stay where some minimum facilities are available? Which is the best month to travel in this route? I am 63 solo traveller

Thanks for the information .

I am in the process of booking thru an agent a package from Manali Volvo stand and dropping at the Volvo stand on the last day. This package is for 3 people and includes hotel stay in Manali retreat or mountain abode with breakfast and dinner for 4 nights starting from 10th June to 14th June 2019 with car avaible for sightseeing to naggar mannikaran kullu and local sightseeing too. Rohtang pass the agent said is 3000 pp so that would be separate if we want to go. The agent is JDS travels in Delhi and he is asking 25000 plus 5%gst. Is the price okay according to you? Pls guide.. my kids are going..

Yes that sounds about right if it includes accommodation + meals + taxi for 3 people.

Need a taxi from Manali to rohtang pass

Hi…I am planning to go from Manali to Pirdi for rafting, then travel to Bir, stay overnite at Bir, finish paragliding next morning and return to Chandigarh…The travel operator has charged Rs.28500 for 4..Is it a good deal in July?

Is that including taxi, accommodation, rafting and paragliding charges?

When will electric bus starts from manali to rohtang ..?? what are the texi rates for this season and sharing tempo traveller will be available ??