I just finished watching Sacred Games Season 2 and to be very honest, I am confused about how to feel about it. When I watched the first season, I absolutely fell in love with it like everyone else. The second season has the exact same recipe like the first one; it, in fact, brings it up to a whole another level. But in doing so, as you watch the show, you start to question if they overdid things a little bit. Do not get me wrong, the show is still as promising and a fast-paced thriller as it ever was. The only difference between the two seasons is that the first one was an all-out awesome whereas the second one has a bit of an ‘absurd’ factor to it.

Before you continue reading, let me warn you that there are some spoilers up ahead. So if you have not watched the show yet but are planning to do so, my advice would be that you should see it first and then come read this review later. And then maybe you can also tell me if you agree with my views or not. 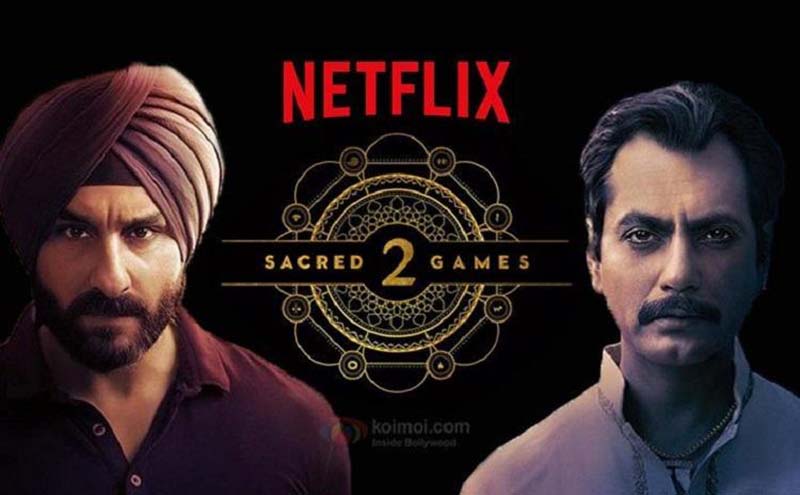 In terms of acting, Sacred Games continues its promise of brilliance. Nawazuddin Siddiqui steals the show and you can’t help but applaud his performance. The entire storyline revolves around him and his narration of the post-independence history of India and Mumbai. Saif Ali Khan too is not far too behind. I think after Omkara, this is the only time when he delivers on the promise of being an actor.

Pankaj Tripathi gets introduced in the show as a Godman. Actually, he was introduced in the first season itself but there wasn’t much camera time for him there. But in Season 2, he is shown as the center point of the entire conspiracy. Everyone liked his performance but to be honest, I really wished they had hired someone else for this role. He just did not fit into it very well. His dialogue delivery and acting feels a little hollow. Kalki Koechlin was average at best.

There are a lot of factors that are hard to digest in the second season. The entire show is about ending the world by starting a nuclear war and the first step for that is to nuke Mumbai. Guru Ji, played by Pankaj Tripathi, is the mastermind of the plot and Ganesh Gaitonde was his pawn. They assume that by nuking Mumbai, India will blame Pakistan and erase it entirely from the world’s map. Then all the other countries will also start nuking each other because India and Pakistan had such fun doing it. And thus the world will end. If a conversation was supposed to happen, this is how it will go.

Question: Why are you planning to nuke and end the world?

Answer: Because we are right now living in ‘Kalyug’ and we need to go back to ‘Satyug’ and for us to do that, we must kill everyone.

Question: Ok, but if everyone dies then who goes back to Satyug?

Answer: Guru Ji and his followers will because we have built bunkers all over the world where we will hide and wait out till Earth becomes hospitable again.

Question: Ok, so where is the bunker?

Answer: It is somewhere in or near Mumbai.

Question: Where is the nuke bomb supposed to go off?

Question: Why would you build a bunker right at the spot where you are setting off a nuke bomb that is 20 times more effective than a regular nuke bomb?

Answer: Oops. Yeah, we missed that.

Question: And what is your plan of rebuilding the world after the blast?

Answer: Well, that is it. And then we also have Kaal Grantha. That is supposed to be our manual for the new world.

Question: What is Kaal  Grantha?

Answer: We don’t know. It is just this strange book with everyone’s handprint in red paint and some weird symbols.

Question: Ok. Where are you getting the nuke bomb from?

Answer: The Pakistanis are getting it for us.

Question: But aren’t those Muslims?

Answer: Yeah, they are. Our best friends too.

Question: But isn’t the whole concept of your story based on hatred against Muslims? You gave so many examples in the show about people hating Muslims. Your own people are supposed to hate Muslims. You even killed a Muslim Boy in the show for no rhyme or reason other than to prove your point.

Question: So why are Muslims getting a Nuke for you?

Question: Who is your main man?

Question: Who is he?

Answer: He is an Egypt born militant who gives speeches about Allah and Sacrifice and everything.

Question: So is he a Hindu, Muslim or Christian?

Answer: We think he is a Muslim.

Question: So what is he doing in a Guru Ji’s Ashram dressed as almost a monk, following Guru Ji’s teachings, even killing for him? And how is he your main man?

Answer: We don’t know. He just comes. He is a nice fellow so we let him.

Question: Who is funding all this?

Question: So Pakistan is giving you a nuke bomb to set off in Mumbai, result of which will be an all out Nuclear war against Pakistan which will further result in the end of the country?

Answer: No that was our plan. We did not tell them about the latter part and they were too dumb to figure it out. Hee  hee. Shahid Khan got the bomb for us and doing all the leg work

Question: Who is Shahid Khan?

Answer: He is this fellow who got introduced in the second season but no one really knows who he is or where he came from.

Question: So Pakistan got the bomb from Korea, funded it, built it, moved it to Mumbai, sent their own man for the task. What is your role in all of this?

Question: The city is about to get nuked, millions are about to die, India is about to go to war with Pakistan, the whole world is on the edge of a nuclear war, mankind is on the brink of extinction and the only people who are investigating it are two Mumbai police inspectors called Majid Ali Khan and Sartaj Singh? Did we forget to inform everyone else?

See, I told you there were absurd factors in it. They truly overdid it. In the final scene, we have a huge size nuclear bomb about to go off in 12 minutes. The only way to stop it is by drawing patterns on a screen, like you do to unlock your phone and you only have got 5 attempts. Yeah, you read it right. Wait there is more. First, the female nuclear expert draws two random patterns in an attempt to gain access to the bomb. Why does she think this is a good idea when you only have five tries?

Our hero Sartaj then says they should get Shahid Khan (main terrorist) to unlock it for them, whom they have already beaten to a pulp by this point. But after asking a couple of times, Sartaj decides that Shahid Khan is no help and promptly kills him, the only man who can actually stop a nuclear bomb. This happens quicker than I can explain it in words, and it comes as both unnecessary and pointless.

These are just a few of numerous plot holes in Sacred Games season 2. The entire time the story keeps jumping from one point to another, between characters and so much that you will lose track of it. Even the investigation will stop making sense and several times you will find yourself wondering where the actors were, what they were doing and why? Ganesh Gaitonde was introduced as a big time gangster in Season 1, an all powerful character. But in season 2, you just see him as someone getting beaten up, used, pushed around; and even getting used sexually by a Baba. Then there are side stories of Jamila and Jojo which are really pointless and go nowhere in the end.

As I said, I am confused about what my final verdict about the show should be. No matter what the reviews read, If you have already watched season 1, then you will definitely watch season 2 despite all its cheesiness, absurdness, unnecessary profanity and confusing storyline. My only advice would be to keep your expectations very low. Do not go in expecting something like the first season.