National Highway 1, also known as Grand Trunk road or Shershah Suri road, is a highway in India that runs from New Delhi to Attari, a small town in Punjab. It is one of the busiest and most important roads in the country but unlike all other highways, it is very poorly maintained. The good part is that this road remains to be in good condition through out the year which it is bound to be considering the traffic it sees but the biggest flaw lies in the current design of this road. It remains to be a narrow road if compared to other large highways in the country and again, considering the kind of traffic that passes by on it. Every vehicle traveling on this road is at an average speed of 80 – 100 / kms per hour, even the buses and trucks but despite this, this highway is open on both sides meaning there are no grids anywhere to prevent cattle or any other animal’s entry. It is not unusual to see cows, buffaloes and dogs running freely on the road. At one time I saw an entire herd of buffaloes sitting right in the middle of the highway. To make matters worse, there are no zebra crossing, no footpaths and no flyover pedestrian bridges. Divider in the middle is barely 2 ft high. People just run right across, trying to cross the road. This highway runs through some of the major towns in Punjab and Haryana and at every town, you will find people walking freely on the road, as if it is just a small street, not a highway In short, this road is an open invitation to accidents, a disaster just waiting to happen. If you are not extremely careful and lose focus for even a second, you may just end up either being dead yourself or killing someone else. 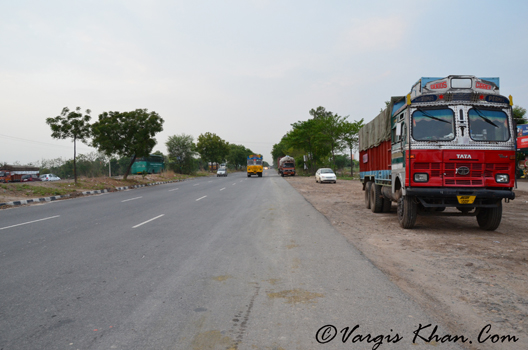 Never have I traveled on this road without seeing a fatal accident somewhere but It was the last accident that I saw which left me wondering till date.

I was on my way back to Delhi from a motorcycle trip to Ladakh and we had just crossed Karnal. Rohit, a friend of mine, and I were riding ahead and the other two of the group, Sunny and Shoaib, were riding a little behind us. It was slightly past midnight and was dark all around. Only lights available were from the headlamps of vehicles passing by. All of a sudden, I noticed from a distance that the vehicles ahead of us were suddenly steering to their sides at a certain point, as if trying to avoid something on the road. My initial thoughts, as we got closer to that point ourselves, were that it must be something lying on the road. Some stone or something that vehicles are avoiding. It was dark so I couldn’t make out what it was and then we were also right riding right behind a truck but from that distance it looked like a piece of cloth lying horizontal in middle of the road. As we approached that point, the truck in front of us also steered to its left suddenly and while we followed its lead, I saw what it was, which I initially thought to be a piece of cloth. To my horror, It was a man. In that brief moment while we went past him, I saw pieces of glass scattered on the road but didn’t notice any blood. Or maybe there was blood which I didn’t see in the dark on black tarmac but at that time, the guy was pretty much intact. He was probably hit by a car and the driver didn’t bother to stop.

I don’t know how long had he been lying there with vehicles running at him at a deadly speed but no one was bothering to stop. People just went right past him.

We applied brakes immediately stopped a few meters ahead.

“Was that a guy lying on the road?” I asked Rohit to confirm, as If I could not believe my eyes that a man was lying in middle of the road, unattended like an animal, a roadkill. I couldn’t believe that no one cared enough to stop and at least check if he was alive.

Just then my other two friends also arrived and stopped by our side and confirmed that It was indeed a man. We got off our motorcycles but just in the moment to see a speeding truck run over the guy. On that dark night people were noticing the man on the road just in time to steer their vehicles to avoid running over him but the driver of that truck failed to do so. With that truck’s headlights shining in our eyes, all we could manage to see what the slight up and down motion in the body of the truck as it’s front wheels crushed the man. Driver of the truck did apply the brakes and stopped but It was already too late. He was too late to notice and to bring his speeding vehicle to a halt.

We immediately turned our faces in the other direction, knowing that what lies on the road now isn’t something that either of us would want to go and see. After watching at all the fuss on the road for a while and a police vehicle arriving , we got on our motorcycles and continued towards Delhi.

Within a few hours, we were all comfortably home but I could not take my mind off what I saw and kept thinking who actually killed the guy. Somehow I was convinced that there was no blood on the road when we went past him so there was a very high chance that he was still alive, until the truck ran him over. He probably was some villager who got drunk and was trying to cross the road late at night. In the act he must have gotten hit by a car and knocked unconscious.

The only thought that kept hitting my mind over and over again was who really killed him.

Was it the alcohol?

Was it his carelessness?

Was it the car driver who hit him and didn’t stop?

Was it the trucker who ran over him?

Were it all those people who saw a guy lying in middle of the road but just avoided him like a dog, rather than stopping to check and help?

Or was it us? We did stop but wasted those precious seconds discussing what we saw. If we had acted in nick of time, we could have saved him from a horrible death. Or was it just National Highway 1 that killed him? Till date I wonder, who really killed that guy?

[…] when you started from in Delhi; and your speed and breaks. You will take NH1, otherwise known as Delhi – Chandigarh Highway and drive through Karnal and Ambala. Just before Chandigarh city, take the bypass that will have […]