Kalka to Shimla Toy Train – How to Plan your Trip !

All of those who wish to go to mountains, and cannot site the reason: “I can’t take long bus journey” “I have motion sickness”. But here we are providing a solution to these excuses. For those who don’t want to take a bus to the mountains, the Indian railway is to your rescue. You can reach Shimla in a train from Kalka in Punjab. And the cherry to the cake is, you can do this journey in a Toy train. These trains are locomotive trains covering a distance of 96 km in a 5-hour ride. The Kalka Shimla Express Route is a World Heritage site declared by UNESCO in 2008 and is more fondly referred to as Kalka to Shimla Toy Train.

Also Read: How to Plan your trip to Shimla

Let’s see a detailed itinerary for it.

From Delhi, you can take a train to Kalka Railway Station. There are multiple trains from Delhi to Kalka, both passenger and express trains. The first train from Kalka towards Shimla leaves at 3.30 AM and reaches Shimla at 6 AM. But in this journey, you would miss the beauty of the onward stations. Starting from 3.30 AM, there are many trains at multiple hours round the day. 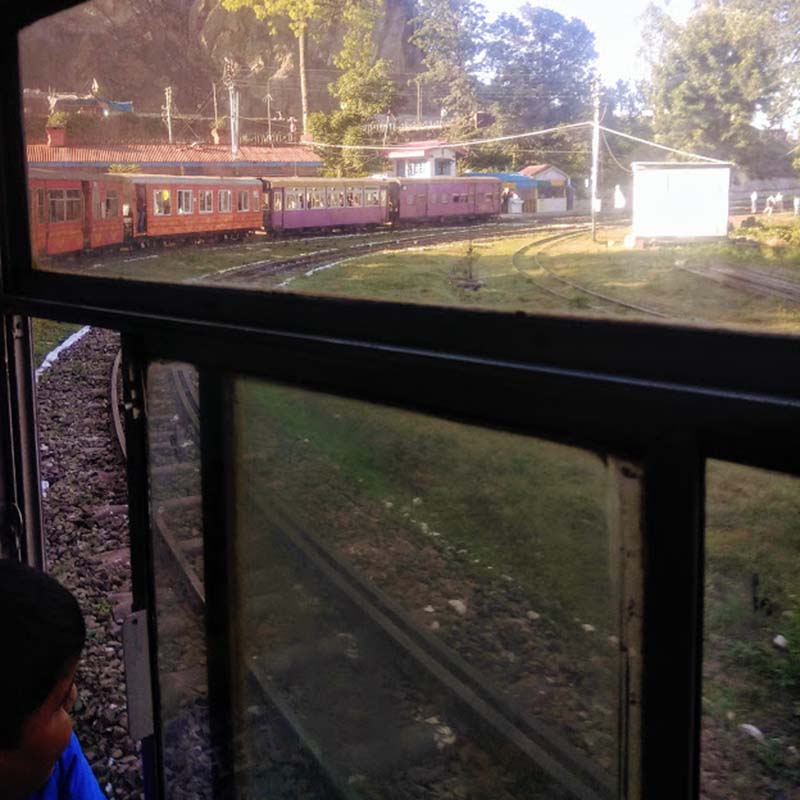 The journey from Kalka to Shimla is one of India’s most scenic train journeys that can be completed in 5 hours. So you can back-calculate and reach Kalka at your Toy Train’s time. Kalka Railway station is a small but beautiful one where all the other toy trains are parked. So you can spend time here observing their beauty as well. The most famous one is the Himalayan Queen which starts from Kalka at 12 noon.

I took an overnight train from Delhi to Kalka for Rs 1,000 for a second AC, reached Kalka at 4.30 AM; and then took General ticket of Shivalik Express which leaves at 6 AM from Kalka. The tickets to Shimla were for just Rs 30/person for the general class, as the other class seats were full. You got to be quick to get a seat in the general class as apart from the tourists there will be daily commuters as well. The train has General, 1st Seating, 1st Class and 2nd Class seats. A sincere advice would be to book prior tickets so that you can enjoy the journey in comfort.

Also Read: What to See in Shimla | Fun Things to do in Shimla

Stations in the Kalka to Shimla Journey

The Kalka – Shimla Railway covers 96 km in 5 hours halting at10 big and small stations. These toy trains pass through beautiful 102 tunnels and about 800 bridges. The longest tunnel is the Baorg tunnel, which is a kilometer long. The train halts at the Barog station for a good 10 minutes, where you can explore this beautiful white and blue station. The station built during the early 19th century shows a British architecture. There’s no gush at the station unlike the typical stations you would have seen.

There are a few shops at the station selling packaged food. There is also a rest house at the station which can be rented for Rs 1000/night. There’s a small Railway canteen for the employees but they won’t let you go hungry. I will recommend having Aaloo paratha which comes loaded with Pahadi butter and friendly smiles from the staff.

Here is a little extra trivia about Barog Railway station and the tunnel here. The local legends say that the Colonel Barog, a British railway engineer, was in charge of creating a tunnel through a mountain in the Kalka – Shimla Railway. On the instructions of the Colonel, the crew was divided equally into 2 different teams. Both of the teams started digging the mountain from the two ends. But they did not meet in the middle. He realized his miscalculations as the tunnel ends could not meet. The workers were disheartened as well as furious. With the accusation of wasting government property and resources the British Government, fine of Rs 1 was imposed on Colonel Barog. This was very humiliating for the Colonel. 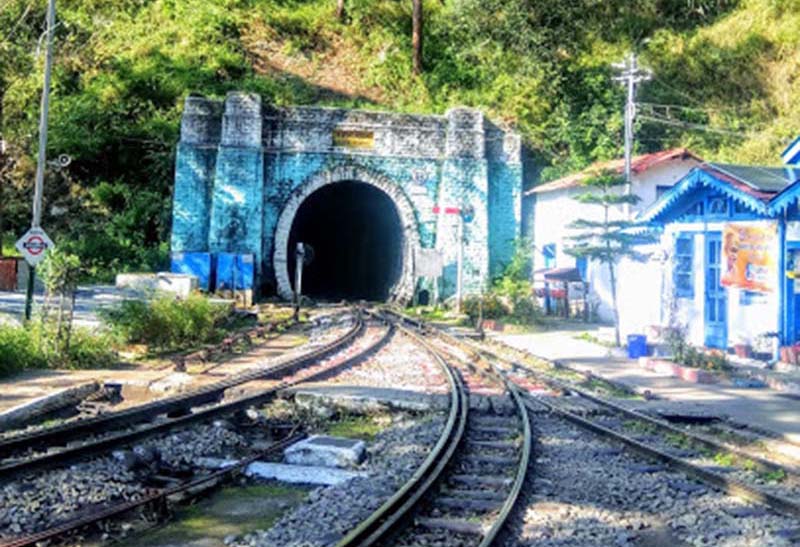 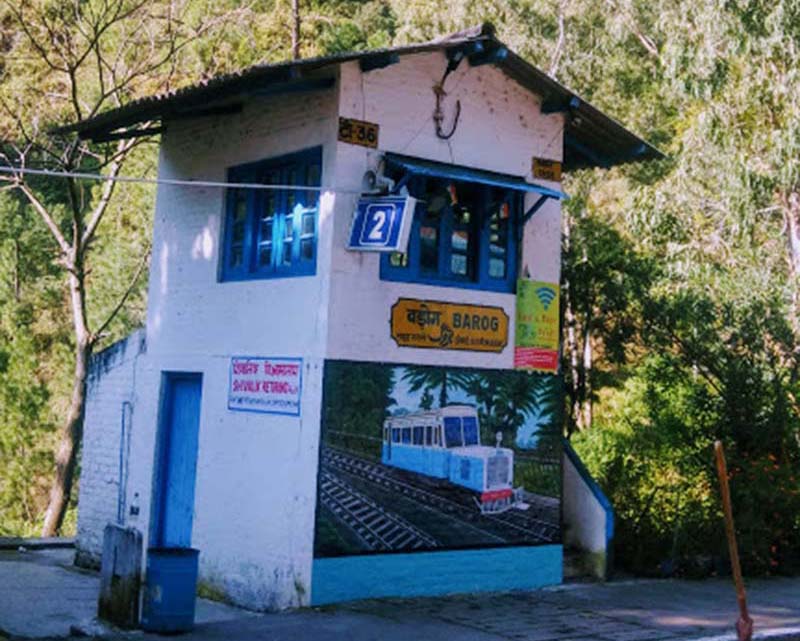 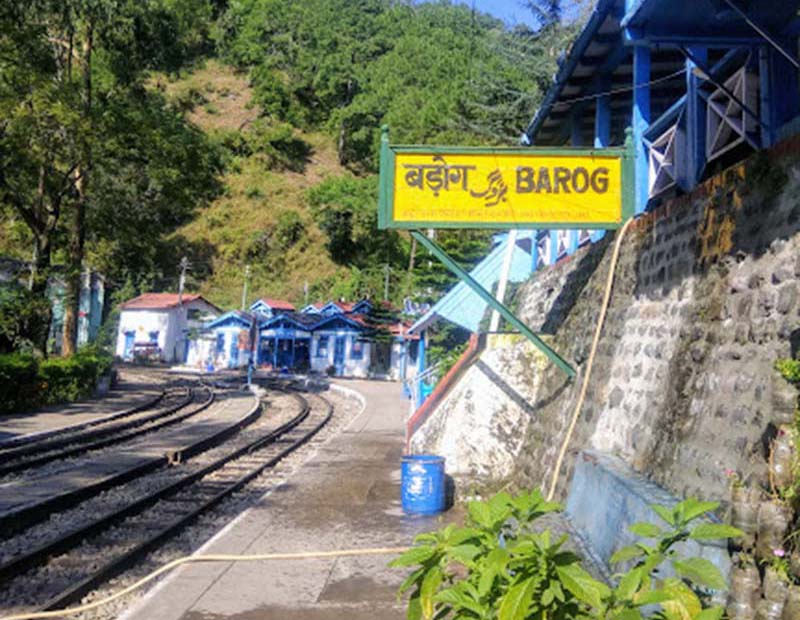 He was very depressed with his miscalculations and the fine imposed. If one is to trust the folklore, he went for a walk near the half-constructed tunnel and shot himself. Since then people have spoken about seeing his ghost walking in and around the old tunnel and the station. Ask anyone at the Barog Station about the old tunnel, they’ll tell you the way which leads to the haunted tunnel, a 2 km hike from the station. Now when you hear about a haunted tunnel around Shimla, you know where it is.

Later, another engineer was appointed to make a new tunnel a km away from this tunnel. The tunnel number 33 was named Barog tunnel, to show respect to Colonel Barog in the Kalka – Shimla route. Every train stops for about 5 minutes here; so don’t miss to get down and click pictures with the cutest station in India in the backdrop.

Also Read: The Legend & The Ghost Of Barog Tunnel

You can get down at Barog Station or resume the journey to Shimla. After Barog, the next station is Solan. No not Solang famous for skiing. This is Solan, famous for its brewery, Mohan Meakin Brewery. Do you know this is where winter’s favorite partner, Old Monk Rum is made? Yes, you guessed it right. Here, in Solan. Old Monk is made in the Mohan Meakin Brewery, Solan. It is situated on the Chandigarh – Shimla highway. It is one of the oldest breweries in India started by the British in 1855, now converted to a distillery. Although you need permission from the head to take a tour inside, the joy of visiting the Old Monk Manufacturer is worth doing the hassle. 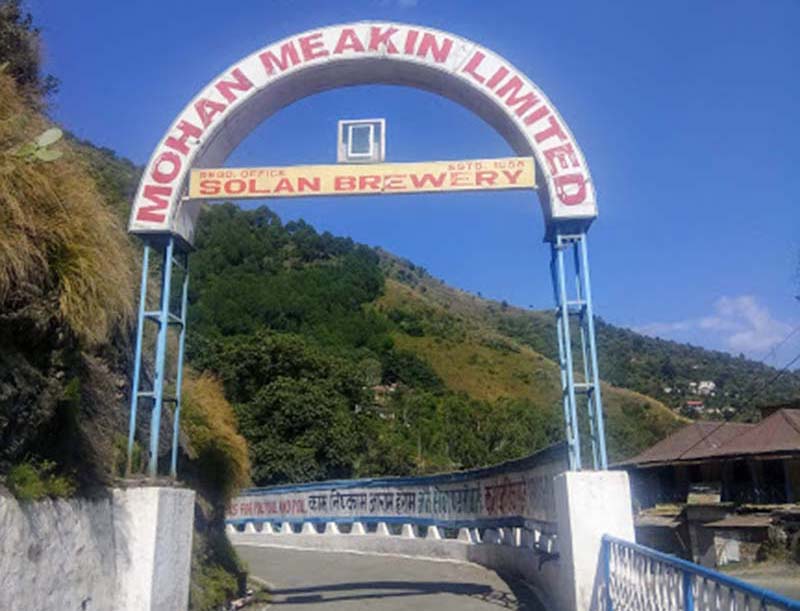 Other things to do in Solan

You can visit the nearby Kali Tibba Mandir, a famous white marble temple made on a hilltop over viewing Choor Chandni hills in the Shivalik range. It is at an hour’s drive from Solan Brewery. Another mesmerizing place is nearby Ashwani Khadd where the famous Mohan Shakti Heritage Park is situated. It is a mesmerizing combination of a park and a temple. It has large lawns with statues of characters from Hindu Mythology. The temple inside has many idols of Indian god and goddess. The park is situated on the river bank and is surrounded by Shivalik range all around.

There is no public transport available near the park, but you can hire an auto-rickshaw or a taxi from the main market. Take the kids here if you want to tell them about Hindu mythology and introduce them to characters from the religious stories. Solan is a small hill station with enough hotel options in the main market and the Highway for a short weekend trip away from the city hustle. 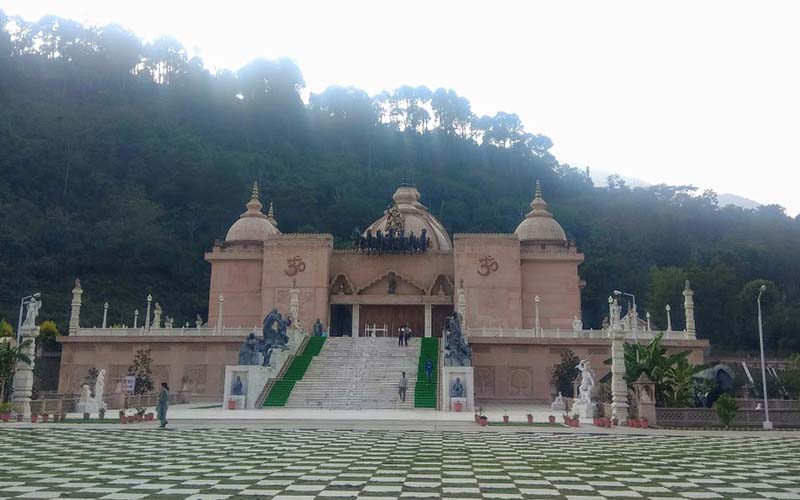 Chail, another beautiful place, 30 km from Solan can also be added in the itinerary. It is not a railway station but there are cabs and busses from Solan to Chail. Chail is famous for its Palace, The Chail Palace, covered fully in Deodars and made by the Maharaja of Patiala. The Palace was also the shoot location for the famous movie, three idiots and was shown as Rancho’s home in Shimla. The entry fee is just Rs 100 and you can also pre-book the hotel for a stay. There are dining and bar options also available here. Other places you can consider for visiting are the world’s highest ground, Chail Cricket ground, built in 1893 and the Chail Sanctuary.

Also Read: How to Plan a Trip to Chail

If you are not getting down at any of the stations, you will notice that from Solan, a steep uphill ride starts and the toy train slows down to an average speed of 30 km/hr. From here the mesmerizing views of the low range Himalayas begin. Another stop that will take you away from the city hustle is Shoghi, a temple city 13km away from Shimla. It has the famous Jhaku Temple, the highest statue of Lord Hanuman as well as the Tara Devi Temple dedicated to Tibetan Buddhist Devi Tara; believed to be one of the nine sisters of goddess Durga. You can also do hiking and trekking near and around Shoghi with the help of local tour operators.

Either you can continue your journey till the summer capital of British India – Shimla in the train, or get down at Summer Hill. The total time taken from Kalka to Shimla is 5 hours if you don’t get down at these stations and enjoy the Toy train Journey. Most of the stations provide food and water and have toilet facilities. But apart from Barog, all the halts are for about 2 minutes only.

Also Read: Best time to visit Shimla – When to go to Shimla

For the return journey, take a similar train back from Shimla to Kalka and then Kalka to Delhi. The last train from Shimla leaves at 6 PM from the Shimla station and reaches Kalka at 11:30 PM. Book your return ticket at the terminating station of your onward journey only as there is less possibility to get last minutes tickets. You can always take a general ticket and hop on, but getting a seat would be a task. Also, enquire about the last train’s timing from the station-master if you are off-boarding at the mid stations as the train timings change according to the seasons.

The journey is suitable for all, Solo Female travelers, Family with kids, Couples seeking a no rush place and Youngsters looking for a weekend getaway. And best suited for those, to whom mountains are calling but they can’t step on the bus! 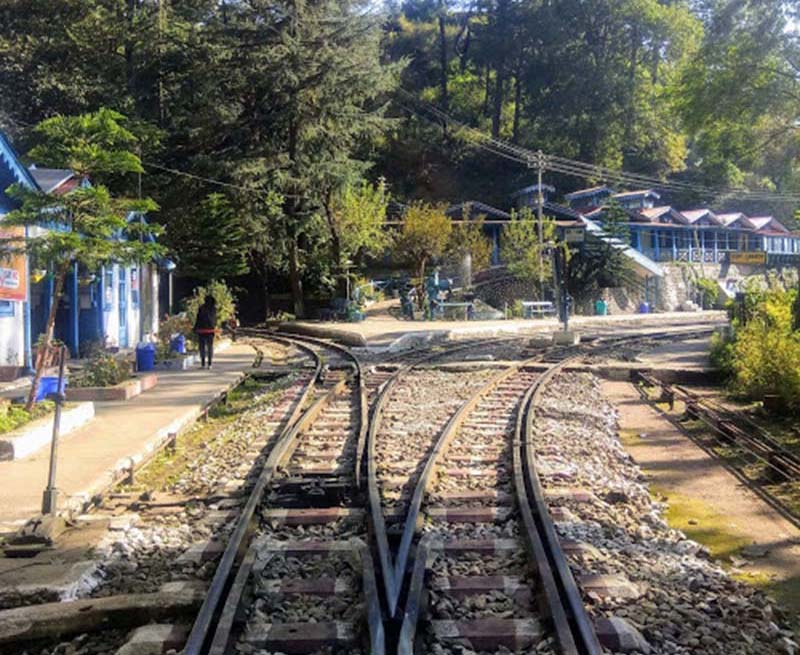 1. Book your tickets in advance for Kalka – Shimla for any train that suits your schedule. Every train stops at the major stations even if not mentioned in the IRCTC stop list of the train. And then you can step down if at any of these little hill stations as well.

2. Try to take the seats towards the right side of the train towards Shimla and left towards Kalka to enjoy the breathtaking views. And keep children away from the windows as these do not have any bars.

I hope the information above on Kalka to Shimla Toy Train was of help. If you have any questions; or need any other details; please feel free to ask in the comments section below; or at our Community Forum; and I will be glad to answer.

A 25 year old Digital Marketer, passionate about travelling to off beat places. I am managing a 9-5 job with a as many as short trips I can take. I have done more than 10 Solo trips. I love to live the local life and take away their lifestyle and stories with me, and giving some knowledge about digital world and sustainable living. Follow me on Instagram at Travelingforstories

Can u tell me how to book toy train ticket and can i book ticket on window when i reach kalka station for toy train . Its very neccessary help me out in this please . ??