The first thing that you should know about Hostel Daze is that it is not everyone’s cup of tea. If you are someone who is easily offended by cuss words, does not like unpolished language or vulgarity then you should give this one a skip. But at the same time, if you are looking for a bit of fun and light humor for a couple of hours than Hostel Daze will pleasantly surprise you.

For a brief overview, Hostel Daze is a mini web series made by TVF (The Viral Fever) and is available for online streaming on Amazon’s Prime Video. The show follows the story of 4 engineering students living in a Boy’s hotel. The show was released in December 2019 and is a total of 5 episodes of 30-40 minutes each. 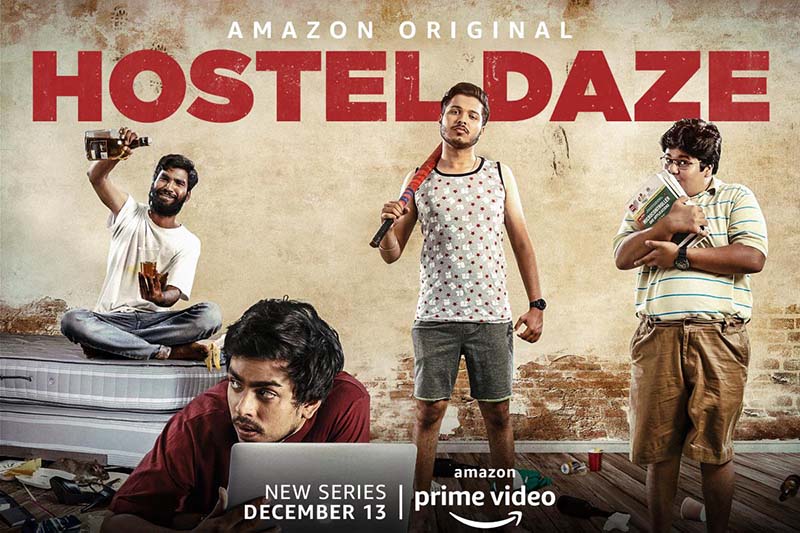 So there are 2 things that are apparent here. The first is that even the show never takes itself too seriously. It runs for merely 2 and half hours and before you even know it, it is over. It covers the entire 4 years of college life in a couple of hours and never goes into any topic too seriously. There are no social or moral lessons to be learned. What you get are 5 small episodes of how the life in a boys hostel usually is; just a bunch of guys goofing around.

But is it any good though? The answer is that yes it is. I started watching it and then could not stop until I have seen all of the episodes. It doesn’t even take too long to finish it as well, much like watching a movie actually. It is full of related comedy and the performance of every actor was simply outstanding. Tone, story, direction, screenplay, cinematography, music, acting and everything else about the show takes the viewing experience to another level.

The only complaint that I had with Hostel Daze was that it was too short but that is possibly also the biggest compliment that I can give it. The show engrosses its viewers completely and keeps them laughing for its entire run time. By the time it ends, you are left wishing there were a few more episodes to watch and a few more laughs to had.

All the characters of Hostel Daze are pretty distinct and each one of them will make you laugh in their own way. All the actors were fresh faces but they all justified their parts.

If you wish to relive your Hostel life again, then this is the right show for you. I have spent three years of my life in a hostel and could totally relate to it. Even if you have never lived in a hostel though; but want to see a show full of laughter and with a glimpse of the reality of hostel; then this is still a perfect choice. I will not go talking about the story and ruin it for you; but what I can definitely tell is that you can stop reading any more reviews and go watch the show. You will not be disappointed.