Scattered amidst the Himalayan peaks are thousands of lakes, a number which is gradually increasing as the glaciers in modern world are receding slowly due to global warming. Some of these lakes are quite large and some are so small that they were better off being called as a pond than a lake. One thing however remains common between all these bodies of water. Small or large, they are all mesmerizingly beautiful. One particular lake however is not really famous for its scenic location. People do not come to this lake to see its natural beauty but to actually see how scary it is. The primary attraction of this lake is not its scenic location but a ghostly trail of bodies and bones. When we step in a lake and look down, we either do not expect to see anything at all due to muddy water or we expect to see stone & pebbles, some fish maybe or just our own feet. Now imagine yourself stepping in a lake and when you looked down, you saw human skulls and bones scattered in the water. When you lifted your head, the sight remained the same and you saw human bones all around the lake. Sounds like a scene from a horror movie? No, it’s a scene from real life. 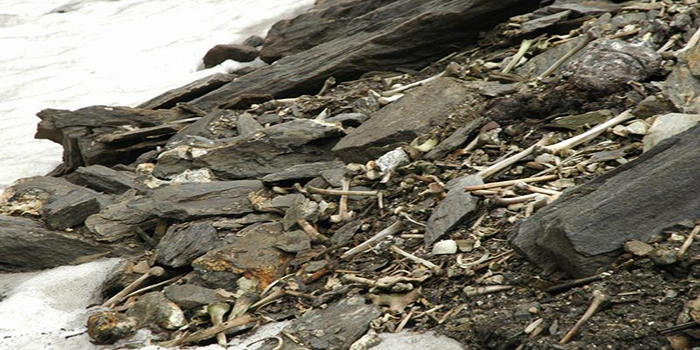 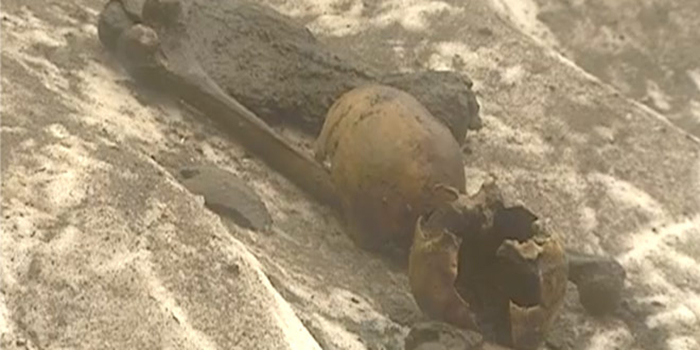 Bones and Skull in the water at Roopkund

Roopkund, also known as the “Skeleton Lake” and locally as “Mystery Lake”, is a high altitude glacial lake in Uttarakhand state of India and lies in the lap of Trishul massif at an altitude of about 5,029 meters (16,499 feet). This is an in-accessible frozen lake that requires a minimum of a four day hectic travel and trekking to reach the proximal locality. There are several other such lakes in the region where Roopkund is but this one came in the attention due to the presence of a large number of human bones, precisely about 300 – 600 skeletons.

It all started way back in 1942 when a Nanda Devi game reserve ranger H K Madhwal came across what looked more like a mass grave than a small lake. He immediately reported it to the authorities and the initial conclusion was that someone around in the local villages was killing people and dumping bodies up here. Another conclusion was that these were either Japanese or Chinese soldiers trying to sneak in to India. The second conclusion freaked out the British as India was a British colony in 1942, a country that they were already struggling to maintain control on and soldiers from other country only meant further trouble. Both these conclusions however were ruled out soon enough and the mystery remained unsolved for several decades after. The only possible explanation remained in the local legends. 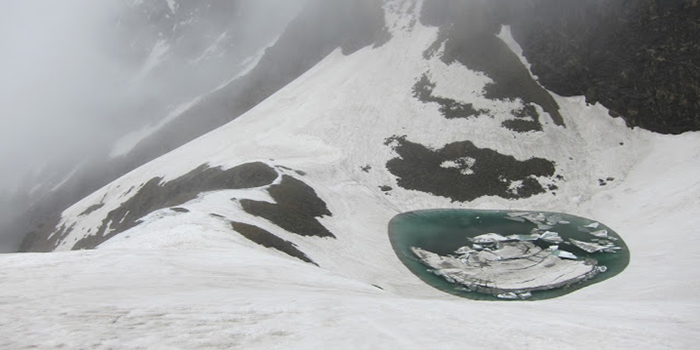 For the world, Himalayas may only be the “roof of the world” but as per Hindu mythology, these snow capped hills are a sacred place. There are several Hindu shrines and holy places up in this hostile environment that thousand of devotees visit each year. All the lakes, no matter how small, here have a name and hold a religious significance. The Hindu pilgrimage, “Chaar Dhaam Yatra” is a travel to four holy temples located up in Himalayas. Among the several gods and goddesses that are believed to reside here, one is a goddess Latu who is considered as the protector of the Hills. There is an ancient and traditional folk song among the Himalayan women, lyrics of which describe this goddess as generous and merciful but also as short-tempered. The thing that upsets her the most is when outsiders defiled her mountain sanctuary and when that happen, she rains upon them by flinging hailstones hard as iron. From this belief, came the first local explanation related to the skulls and bones found at Roopkund.

In the medieval times, there lived a king Ramabhadra of Gurjara-Pratihara dynasty that ruled over Kannauj for over 400 years. King Ramabhadra’s reign was however a short one, lasting three years. His rule was a troublesome one as he encountered many difficulties during his reign. He was said to have married a princess that he was in love with against the wishes of his parents and royal advisors. When Ramabhadra became king, his primary concern was to face invasions from Rashtrakuta dynasty. To add to these troubles, his wife did not bear a child for several years after marriage which was a matter of uttermost concern in those days as a King was supposed to have a son as his successor. Ramabhadra was advised to marry again and get another queen but he did not want to do that as it would break the heart of his beloved. So he made a pact with the Gods that if they granted him a son, he would go on a pilgrimage journey to Nanda-Devi Mountains. His wish was granted and soon the queen gave birth to a beautiful son. In order to keep his pact with the gods, Ramabhadra along with a few of his soldiers set out for the pilgrimage journey but he made the grave mistake of taking along several of his dancers. During the journey, his caravan halted for night at the Roopkund lake and soon what was supposed to be a religious journey became a celebration which was seen as an insult by the mountain goddess Latu. That night came a hailstorm at Roopkund which killed the King and his entire caravan and buried them forever at the lake.

This story remained the local legend for years along with several others. Another belief was that the skeletons belonged to General Zorawar Singh of Kashmir and his men, who had got lost and died in the middle of the Himalayan region after they got caught in bad weather while returning from the battle of Tibet in 1841. Some considered these bones as the result of a mass pilgrimage suicide. Science always either disregards the local legends or proves them wrong however decades later after Science has made significance progress, the results from the tests on bones found at Roopkund was shocking.

Some skeletons were found with flesh still attached to them which could be because of the fact that this lake remains frozen throughout the year and only melts for just one month so cold environment must have kept the bodies preserved for a long period. After running several tests it was concluded that the bones were of Indians and not Chinese or Japanese. Later studies placed the time of mass death around the 9th century, around 850 AD. Scientific tests revealed that the skeletons belonged to several groups of people, including a group of short people (probably local porters) and a taller group who were closely related – with DNA mutations characteristic for Konkanastha Brahmins (Chitpavans) from Maharashtra. Along with the skeletons, objects like wooden artifacts, iron spearheads, leather slippers, rings and jewels were also found which suggested that some of the people who perished at Roopkund were either rich traders or from Royal families, or maybe a king himself. The researchers concluded that the death was due to a fatal blow on the back of their heads and not due to any wound by weapons, avalanche or landslide. The marks on their skulls and shoulders indicated at being hit by something round, like a cricket ball. The absence of injuries to other body parts indicated that hard round objects, possibly cricket ball sized hail stones or ice balls, fell from above. All the bodies had died in a similar way, from blows to the head. 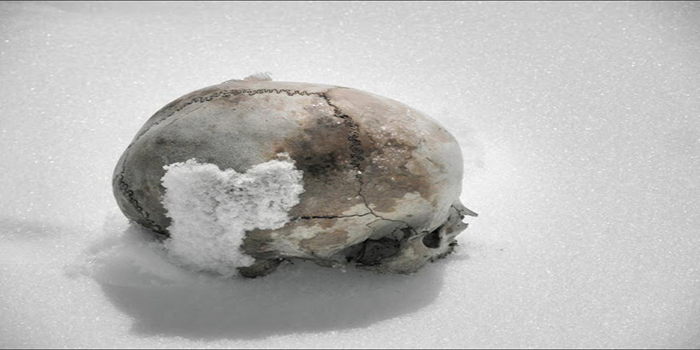 Skull lying in the snow at Roopkund

As per the historical records, the deadliest hailstorm ever recorded occurred on April 30, 1888 in the northern districts of India, killing 230 people. In recent times, a severe 20 minutes hailstorm on Jan 31, 2013 killed 9 people in the state of Andhra Pradesh. It appears these freak hailstorms with monstrous hailstones have a history of forming in the Deccan Plateau of India and in Bangladesh. Considering its location, the deaths at Roopkund Lake could very likely be the result of a freak hailstorm. Although they are quite rare, history indicates these hailstorms do have a higher occurrence in that particular area and have been known to produce small boulder-sized hailstones. Taking all of the evidence into consideration, it seems probable that a very short but intense hailstorm would have led to the death of 300-600 individuals between 800 – 850 which is also the time when king Ramabhadra ruled over Kannauj.

Amazing blog. I’ve read most of your himalayan stories. Would love to read more if you have any.