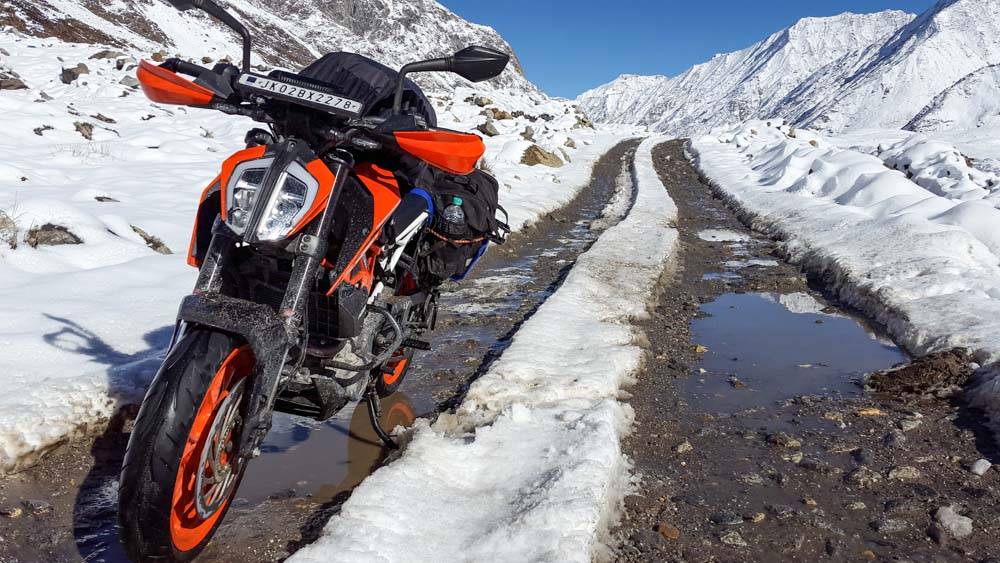 With riding season fast approaching an end here in the mountains, I decided to go on a road trip to Zanskar Valley. I decided to leave on 20th September from Jammu, spend a week or so in the valley, photograph the place and simply enjoy the ride.

I like to go off-season as the places are usually less crowded and in especially autumn, you get colorful foliage all around fallen.

It all went according to plan till I reached Rangdum. Then the weather Gods simply didn’t want me to go further and I had to bow down to their will. It snowed hard for over 24 hours, the road was closed and I had to return back.

It was a ride/drive of torture. The road from Udhampur to Quazigund was under construction and the dust is unbearable. Jams are pretty common nowadays. I was able to maneuver my bike through the jam at Banihal.

Unlike during my last trip in May when it was raining, it was sunny all the way this time. Dal Lake was hazy as always and pics never come off that are worth sharing.

My first break came at Sonamarg for a hot cup of tea. From here on, I took frequent photography breaks. The weather was amazing and I was enjoying the ride.

Part of the Thijwas Galcier. View from Sonmarg market 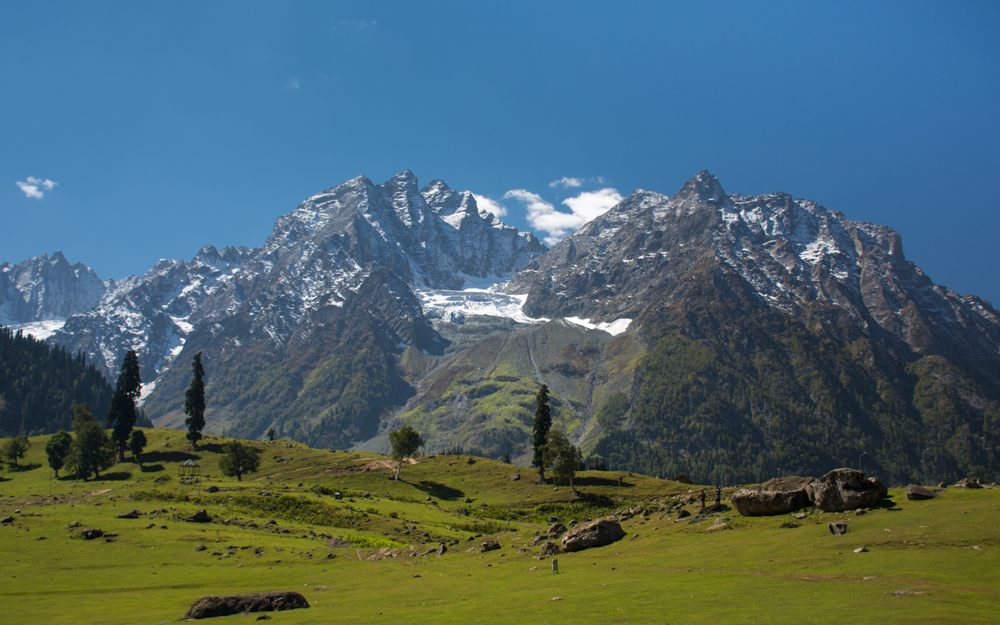 The road is truly amazing and a joy to ride on.  It had butter smooth tarmac and beautiful views.. ah!  What else could one ask for? Loved the colors and the flowing river. 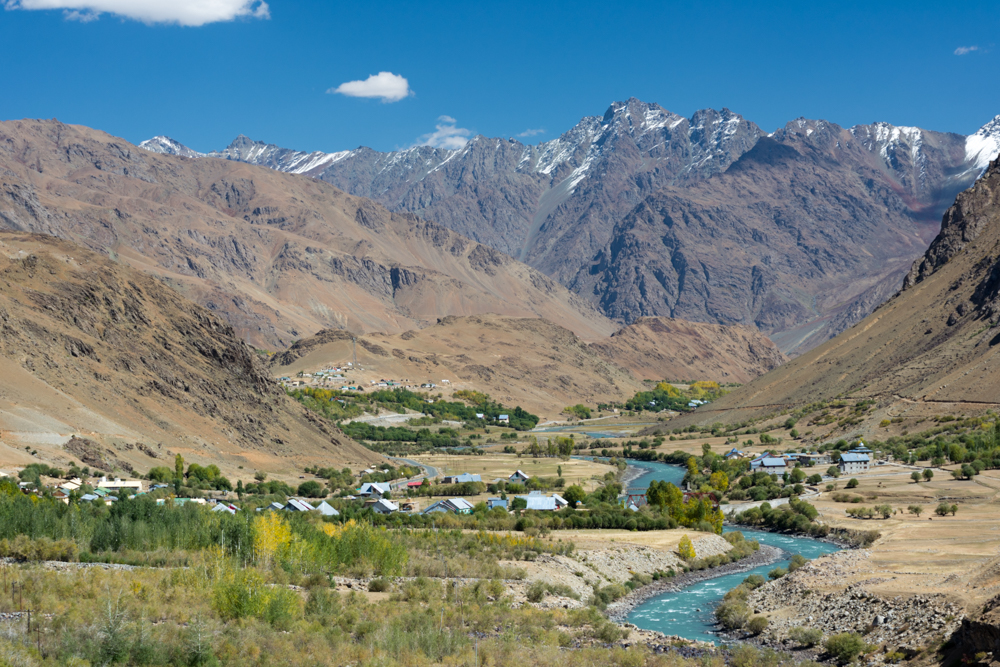 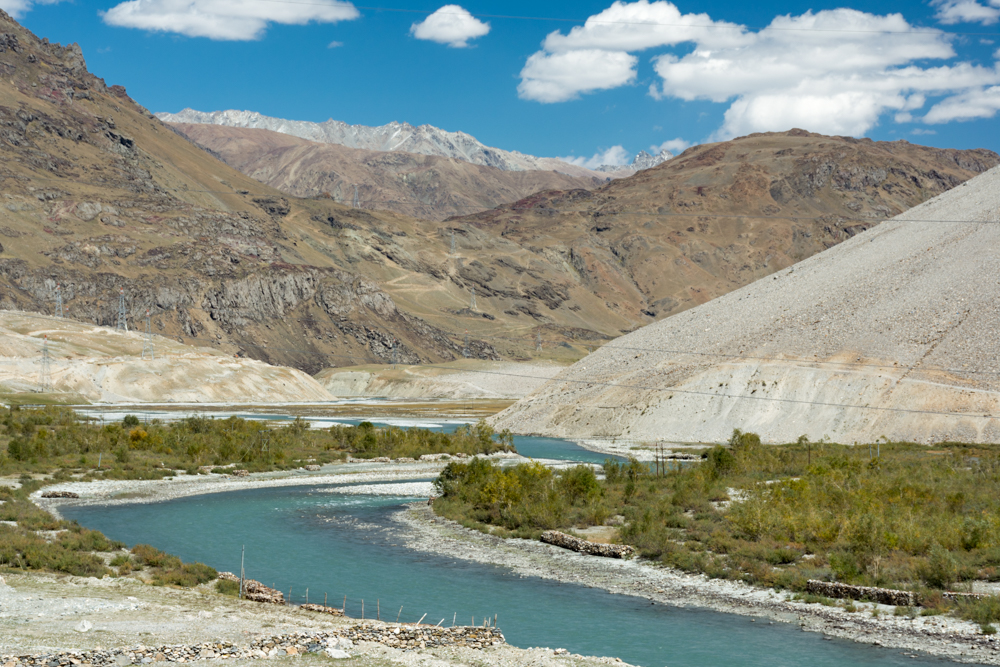 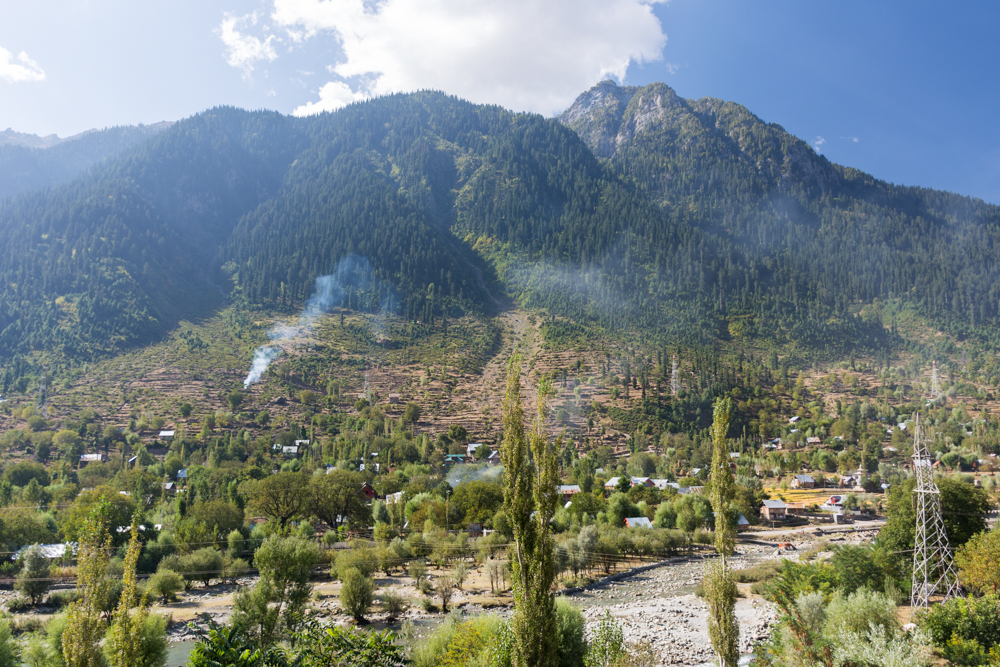 Zoji La was dusty as usual. I met a group of riders at the check-post. They were going to Leh and knew they would have a change in their plan and we would be stuck together in Rangdum.

I stopped at the Kargil War Memorial. 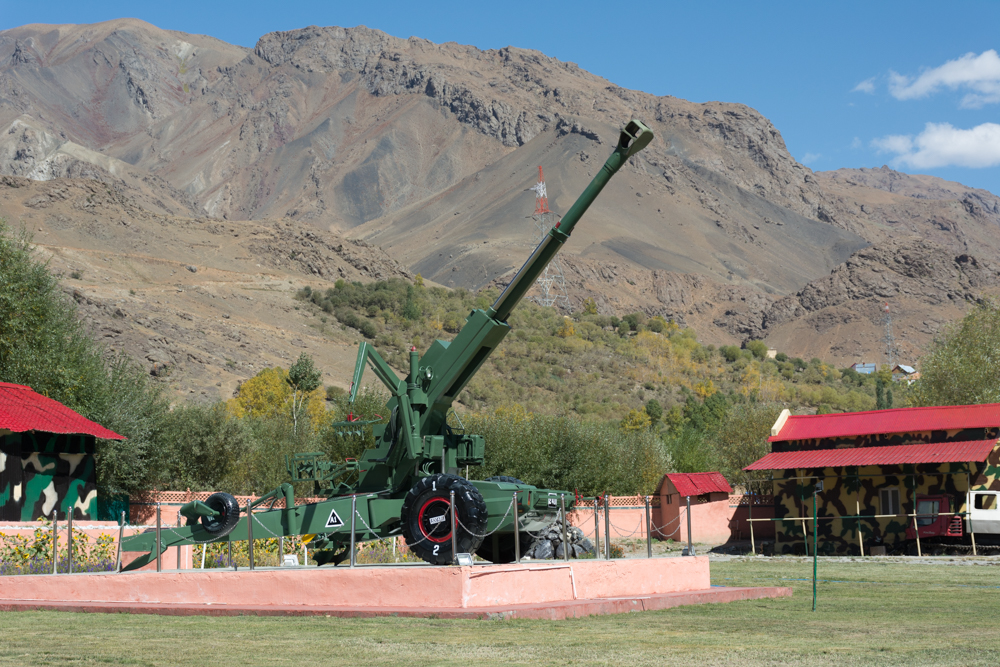 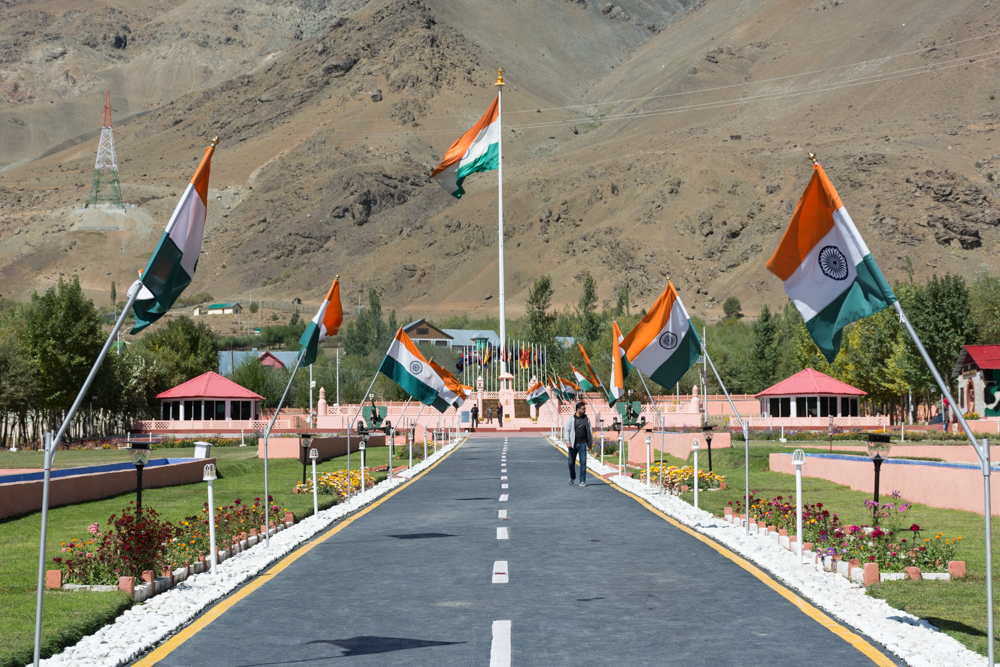 I reached Kargil around 3:20 pm and went to see Hunderman Village. One can see the Pakistani village and outpost from here. Proceed further to see the ruins of the Hunderman village.

Not a sign you would want to see. The road was mined during the 1999 war and some may still be there along the road. 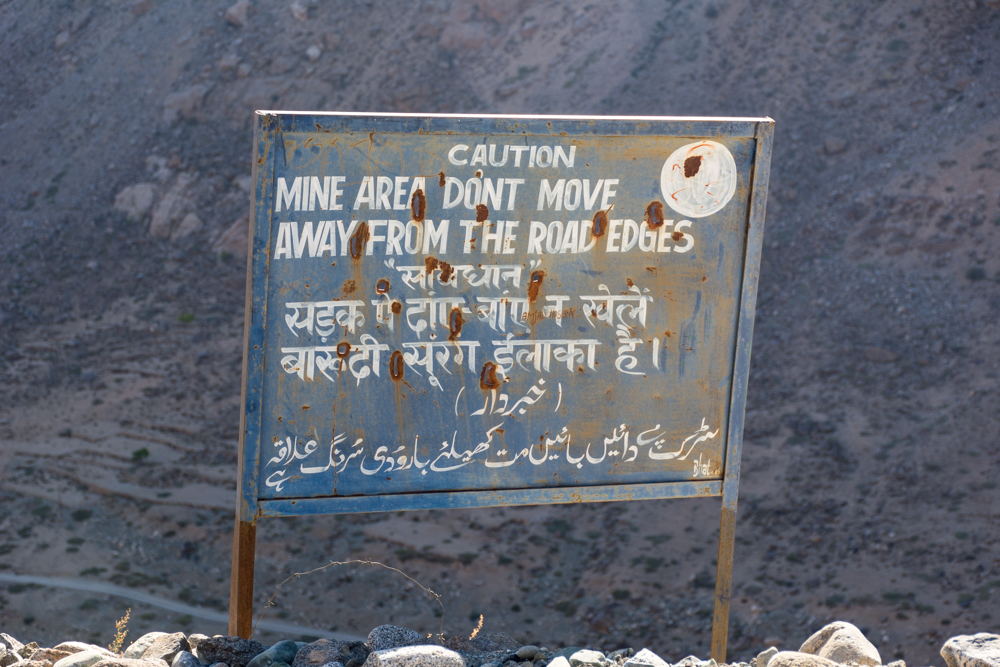 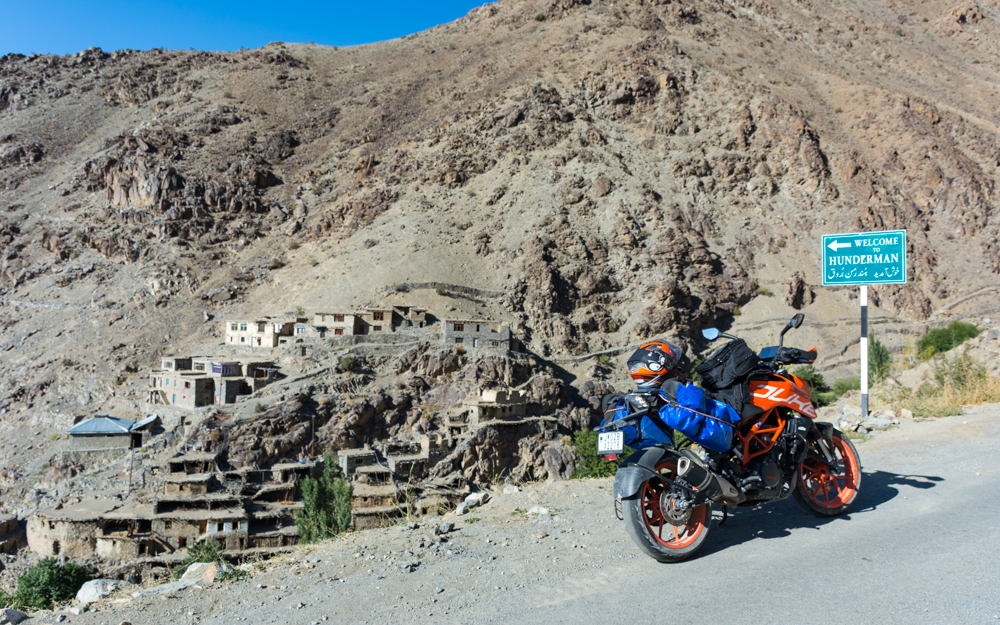 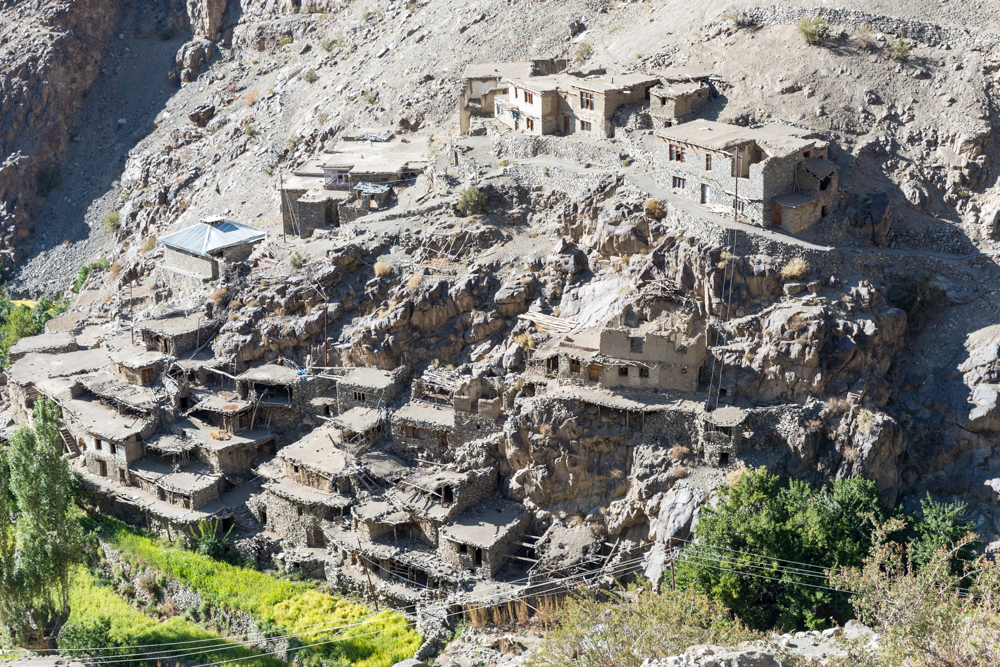 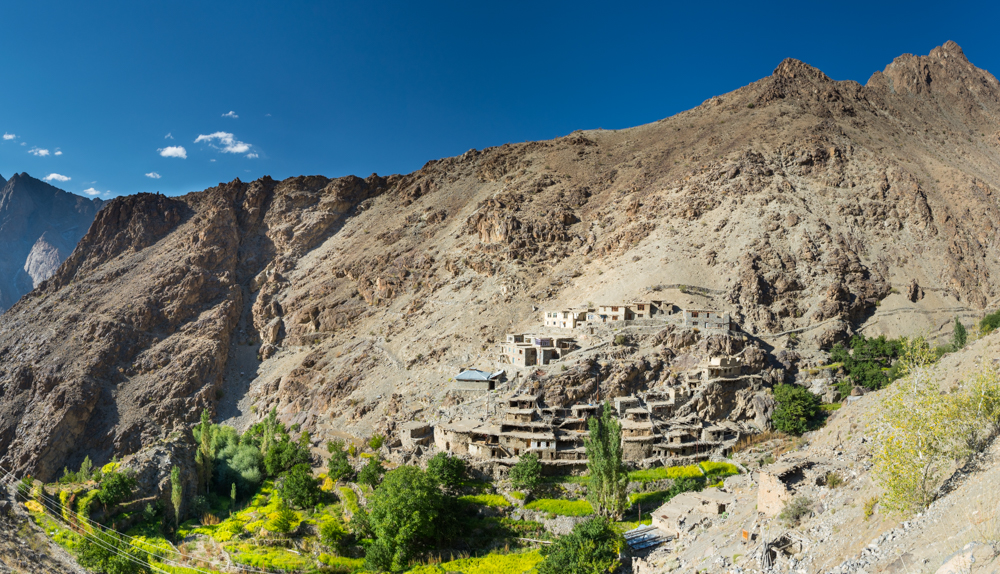 This small green patch is in Pakistan 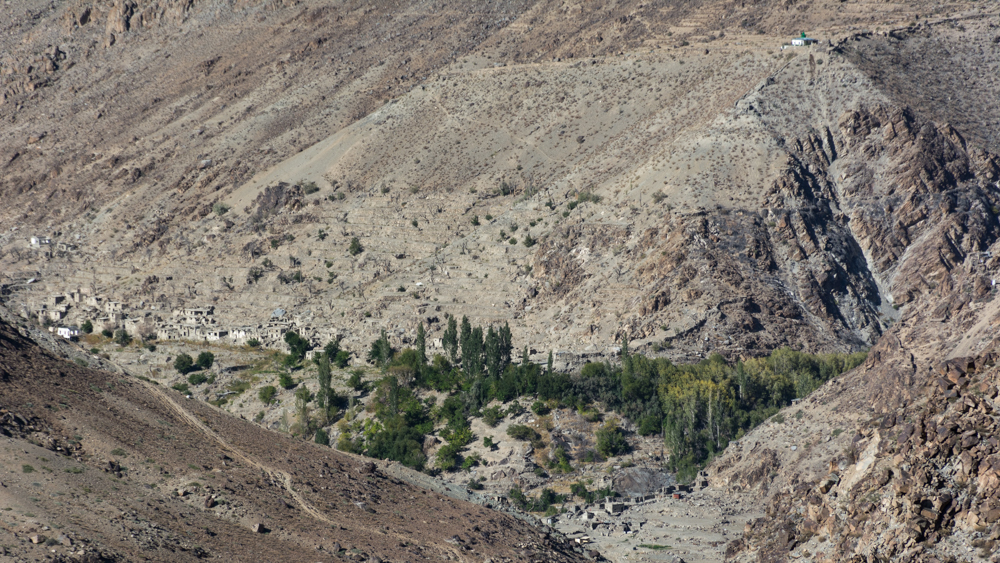 I then returned back to Kargil and took a room at Afzal Guesthouse. I had also stayed here in May. The rooms are big, clean washroom with geyser and parking. I paid 600 for the night.

P.S. I used a CPL filter for the first time on this trip, so some pics may have irregular color shades in the sky.

The day started with the view of a bright clear sky through the window. I knew the distance wasn’t much. Even if I take frequent breaks, I should reach well before sunset. I left at around 7:45 am from the hotel.

I had breakfast in a shop below the hotel, tanked up the fuel, carried an extra 7 liters, and proceeded onwards to Zanskar. It was a beautiful morning with a clear blue sky and the calm warmth of the sun 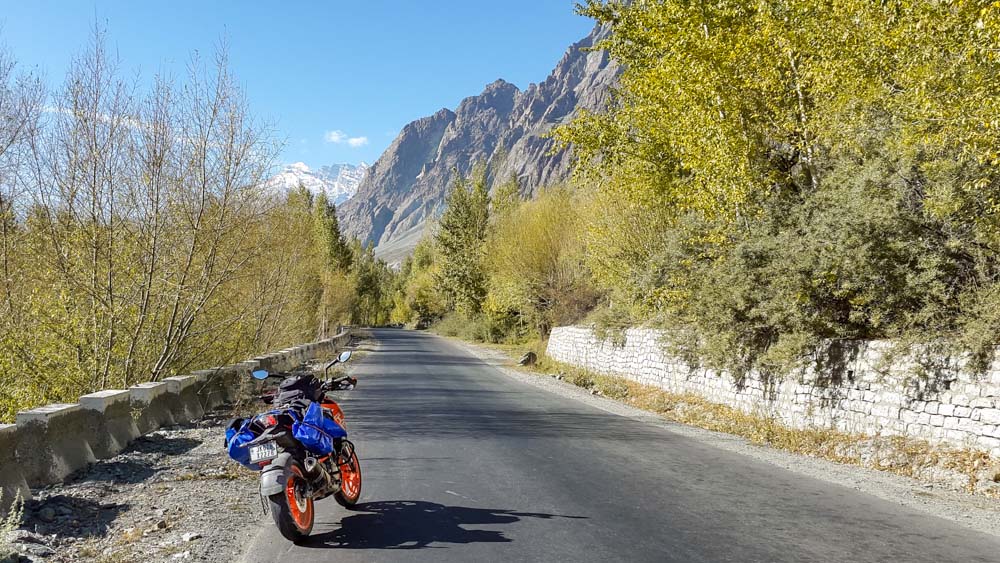 There wasn’t any traffic and the smooth tarmac was a joy to ride on. Exactly what I had imagined when I started touring on a motorcycle. A high performing bike, smooth tarmac, colorful foliage, and snow-clad mountains in the backdrop. 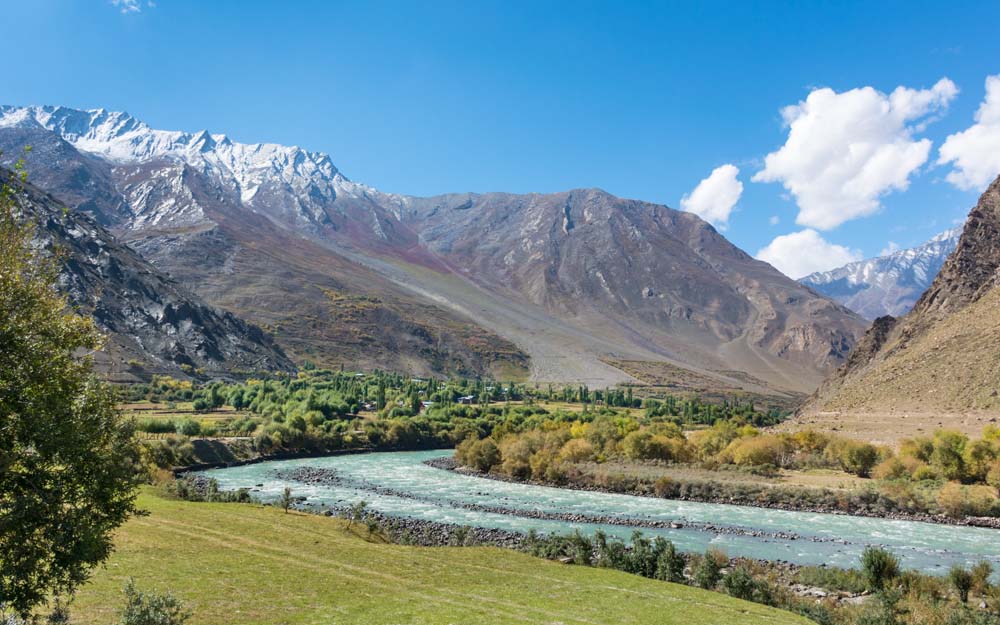 At Sankoo, I went to see the Buddha statue. I had some difficulty in finding the place as people were giving me random directions. In all, this 14 km approximately took over an hour and I went back to the road for Zanskar.

After asking for directions from a few locals there, I finally found the statue. We have to cross the Suru river to get there. 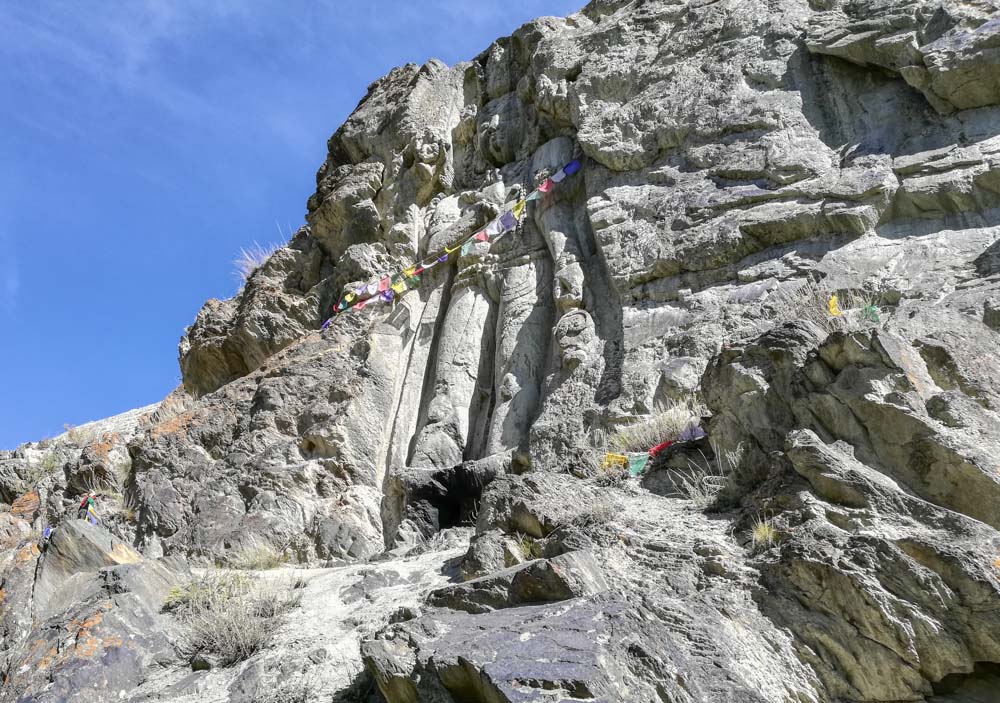 I was enjoying the solitude of riding alone with no one around, clicking pictures wherever I liked, and simply loved the clean atmosphere.

I stopped here at a Dhaba at Panikhar and had an omelet for lunch.

View of the glacier from the Dhaba. 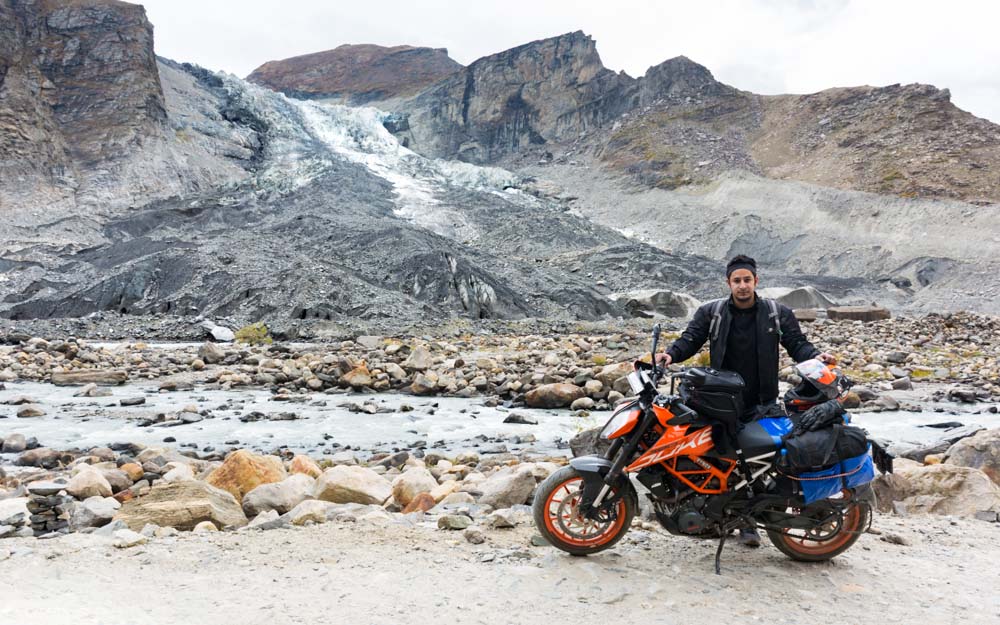 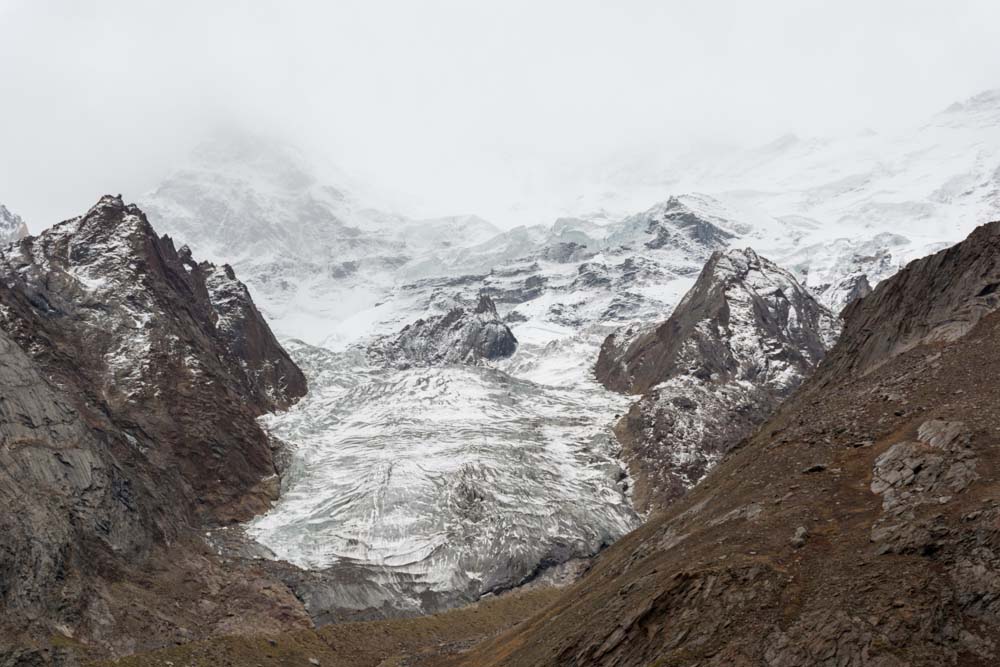 As I neared Panikhar, clouds started to build up. Around 2 pm, it started drizzling and this kept on till I reached Rangdum around 4:15 pm.

Some pictures I took between Panikhar and Rangdum. 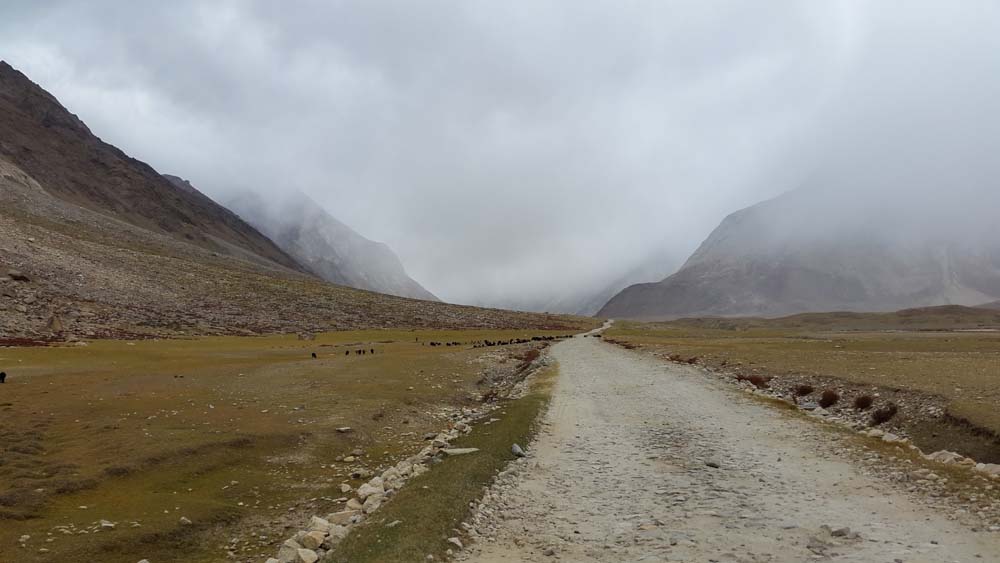 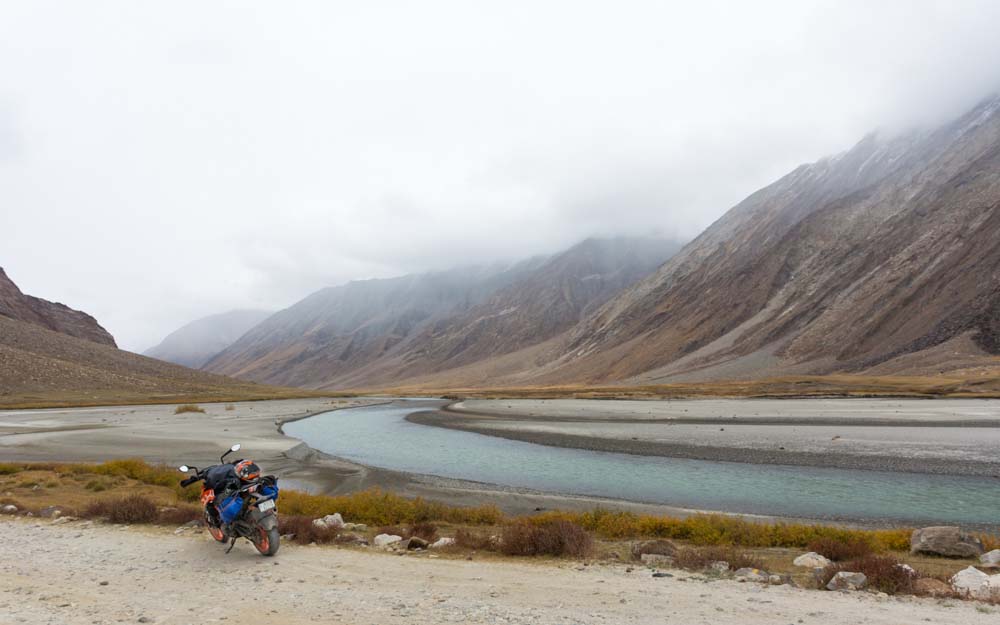 I went to the JK Tourism guest house for accommodation. I checked the room and it was pathetic, to say the least. Really dirty rooms and sheets. Add to that, there was no running water and one had to go outside to use the handpump. The caretaker was asking Rs. 500 for the night.

I then went to the Himalayan Inn and inquired. The lady there was asking for 2000. I told her that you have an empty hotel and I am the only one, I won’t pay this much. Then she came down to 1000 and I told her 700 to which she took a few minutes and then agreed.

At around 5.30 pm, another rider on a Dominar came. We met and started chatting. He was from Delhi.

It was now raining hard. Rainfall slowly turned into snowfall and its intensity kept on increasing with every passing hour.  Later at around 11 pm, a group of 8 riders from Kerala arrived, covered full of snow. They had started pretty late from Kargil and luckily didn’t get stranded en route. That would have been dangerous. This group was the same one that I had met at the Zoji La check post.

The snowfall continued for the next 24 hrs with a couple of hours break in the next morning. It was snowing throughout the night and I had a restless time. I woke up around 3 am and felt sick with a strong feeling of vomit.

I opened the door and window for air and took long breaths. Had a glass of water and took strolls in the corridor. Slowly started to feel better and came back to the room and took refuge under the blanket.

I woke up again at around 6 am and went to the kitchen where many other riders were already present. Felt like I wasn’t the only one who had a rough night.

Snowfall had slowed down a bit and went to check on the bikes. 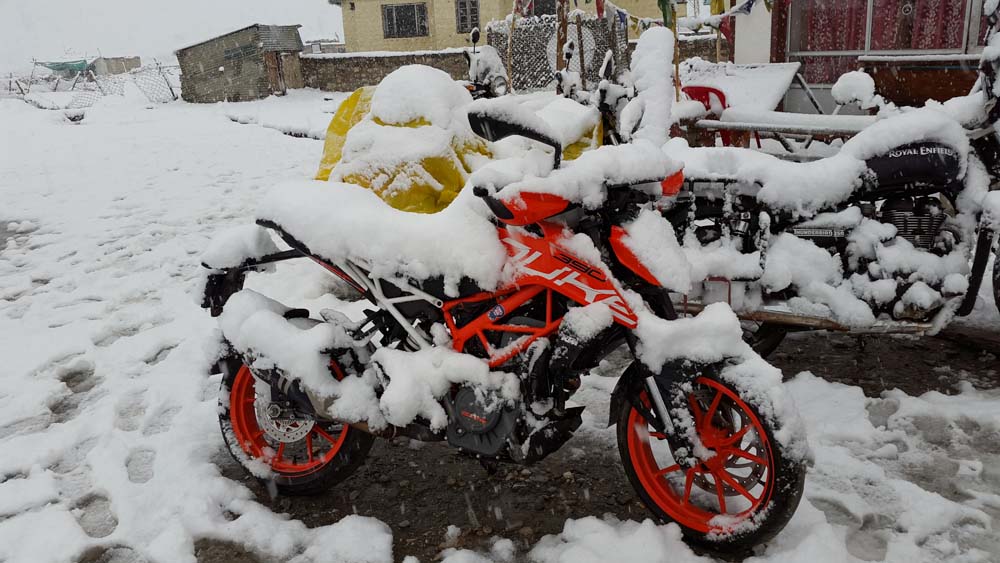 Had breakfast at around 8 am and the snowfall stopped for an hour or so. But it started again shortly and it poured like anything. 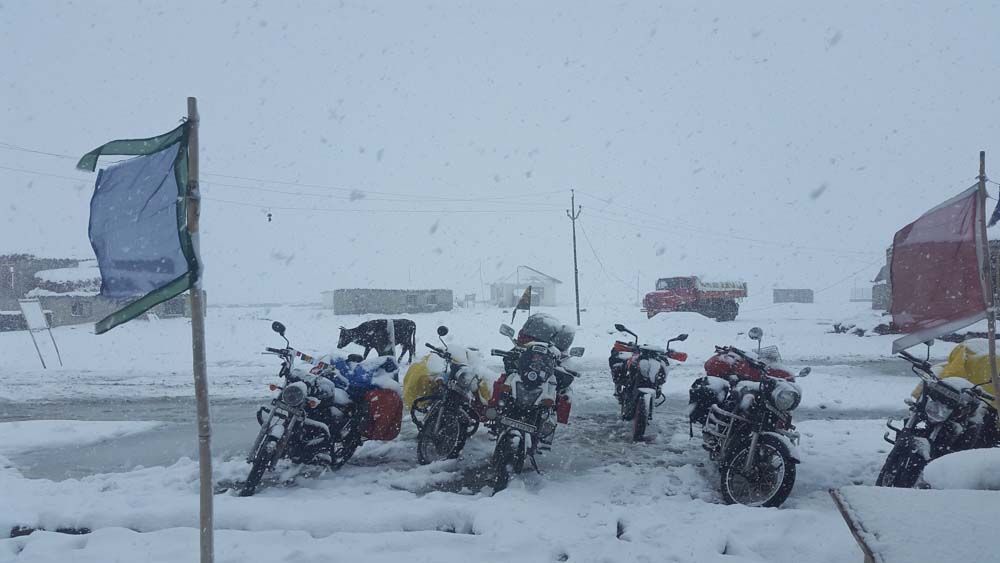 Confined to the hotel, there was nothing to do. We talked for most of the time and somehow time passed. In the evening around 5 pm, the snowfall stopped and got an opportunity to view the amazing snowclad scenery around and witnessed the most amazing sunset of my life till now. 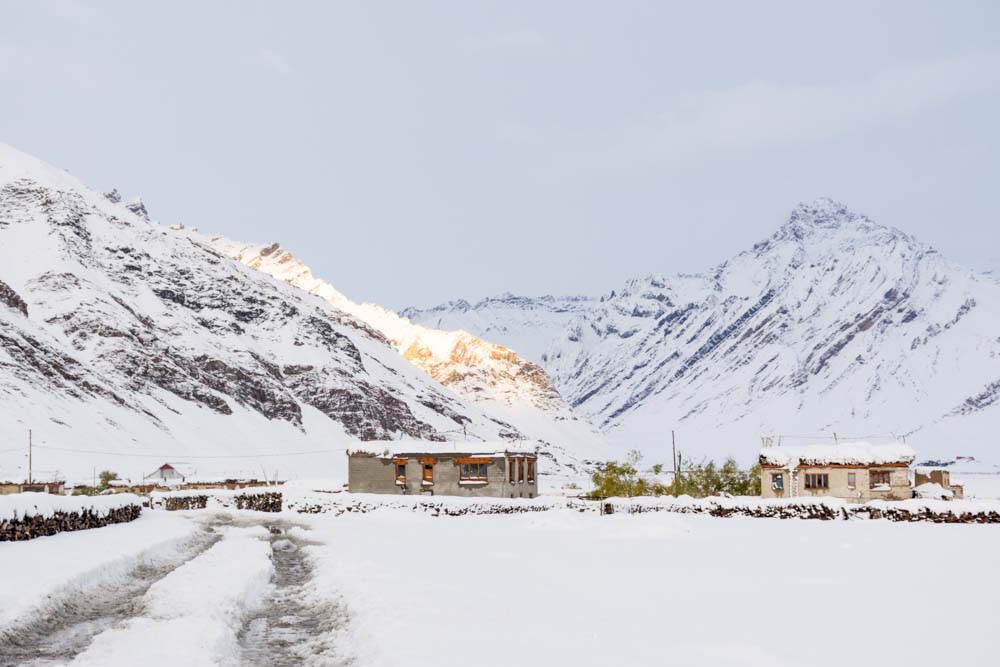 Now let me show you the setting sun and how beautiful it got within 20 minutes. 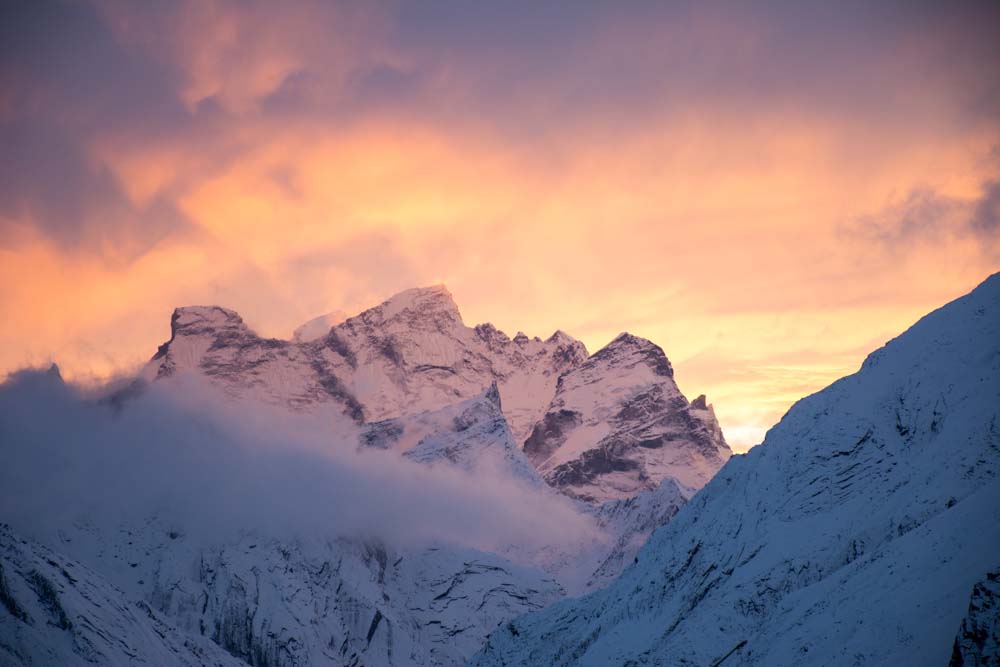 Army trucks from a camp nearby visited the hotel and we asked the driver about the situation ahead (towards Padum). We got to know that the snowfall was even more intense around Pensi La and the pass would not open for a week or so. Hence we all decided to ride back to Kargil and hope to visit Zanskar valley in the future.

The snowfall had stopped last evening and the sky was clear. Sun was shining and we were optimistic about going back to Kargil. We inquired from a couple of Army truck drivers in the morning and they told us that the road was open and if we are confident, we can ride to Kargil.

But the constable at the check post in the village was really not in a mood to let us go. From 9 am, we were ready to go and finally were able to leave at 2:20 pm.

I think he and the hotel guy had some arrangement as when we were packing our bikes, the hotel guy called the constable and told him of our plan to leave. This happened twice.

After that, he started stopping us from leaving and was giving excuses that the road was blocked and he has orders to not let anyone leave. This was a complete lie as apart from snow, there weren’t any landslides en route which he was claiming had happened. Even the guys at the Sankoo check-post were shocked as to why we were not allowed to leave earlier.

The weather was sunny, but the route was slushy as expected due to snow. Tyre deep water crossings were in abundance and slushy all the way. We reached Kargil around 9:15 pm. Since we had started pretty late from Rangdum, we didn’t take many breaks as we wanted to cross the snowed out part before sunset. It would have been really tough to ride in such conditions after dark.

Only a few pics of the return journey. It was really beautiful all around but lack of time didn’t allow me to stop and take pictures. 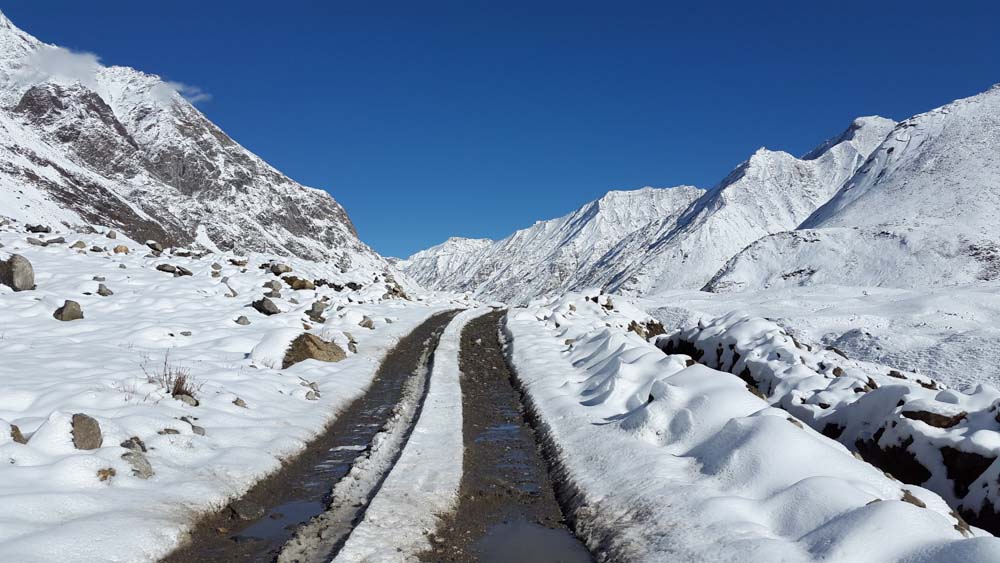 My bike’s stock tires were fine while going, but I had difficulty at a few slushy sections while coming back from Rangdum to Kargil. Rest it was all fine.

Kargil to Anantnag ride was just OK, nothing worthy of sharing. Clicked a few pics en route and enjoyed the ride. 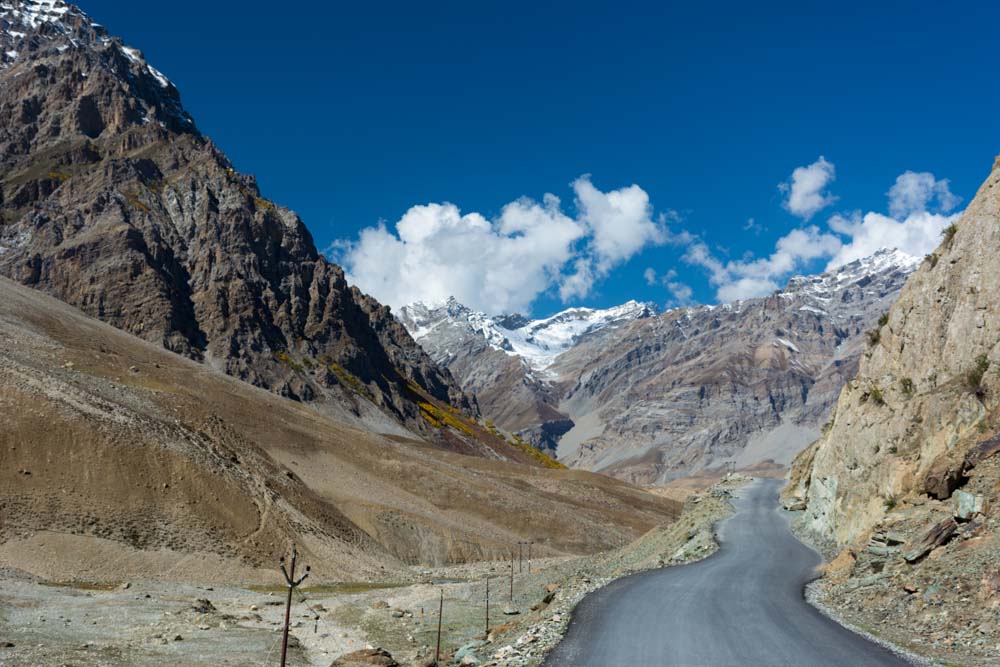 This concludes my road trip to Zanskar Valley. It was a fun short ride and even though I had to cut it short, it was full of adventure and excitement. It isn’t every day that you get to experience snowfall. Now looking forward to next year.

I hope the travelogue and pictures above were of help. If you have any questions or need any other details on planning a road trip to Zanskar valley, please feel free to ask in the comments section below, or at our Community Forum, and I will be happy to answer.

Nadeem is a rider from Kashmir who enjoys solo rides and enjoys the solitude and the freedom that comes with it.