Manali to Leh Bus Experience – Is it Safe & Comfortable? 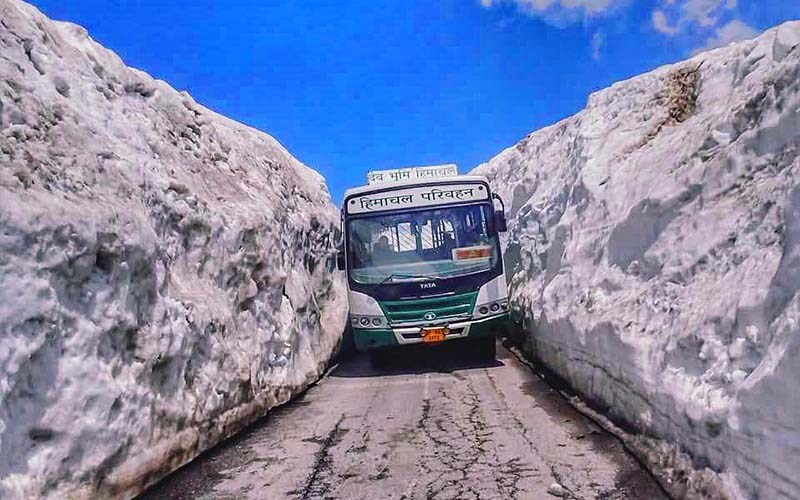 How is the bus service between Manali and Leh? Is it comfortable and hassle-free? These are some of the most frequent questions I get asked by people wanting to travel to Leh from Manali by Bus. If you too were wondering the same, then below is the Manali to Leh Bus experience shared by a couple of other fellow travelers.

Kaustubh Kale traveled from Manali to Leh by HPTDC bus and Komal traveled from Leh to Manali by HRTC bus so you can actually read about the experience of both the buses. I will copy-paste their experience as noted penned down by them both.

Manali to Leh by HPTDC Bus

I had already booked my seat in advance just to be on the safer side. The fare of the bus was INR 2,900, including the night-stay at Keylong, dinner, and breakfast early morning the next day. We reached Keylong by evening and stayed at the HPTDC Hotel Chandrabhaga.

It is a dormitory type accommodation with 4 or 5 beds in each room. The rooms and washrooms were clean, better than what I expected, so I was happy. Dinner was amazing too. No complaints with anything regarding the bus. The bus left early morning at 4.20 am the next day for the final lapse of the journey to Leh.

Keylong to Leh is by the same bus HPTDC bus that brings tourists from Manali to Keylong. Unlike the HRTC Bus, you are not required to change and board a different bus.

Your allotted seat remains the same throughout the journey; from Manali to all the way till Leh. Breakfast in the morning was inclusive of bread-omelet, one banana, and a cup of much required hot tea. The bus left at 4.20 am in the morning and reached Leh at 7.30 pm.

Leh to Manali by HRTC Bus

The bus had quite a few passengers when it started at 5 am. As the bus left Upshi and started the climb up to Tanglang La, the traffic came to a halt somewhere in the wilderness. A truck had sunk into the muddy road and was stranded there from last evening. 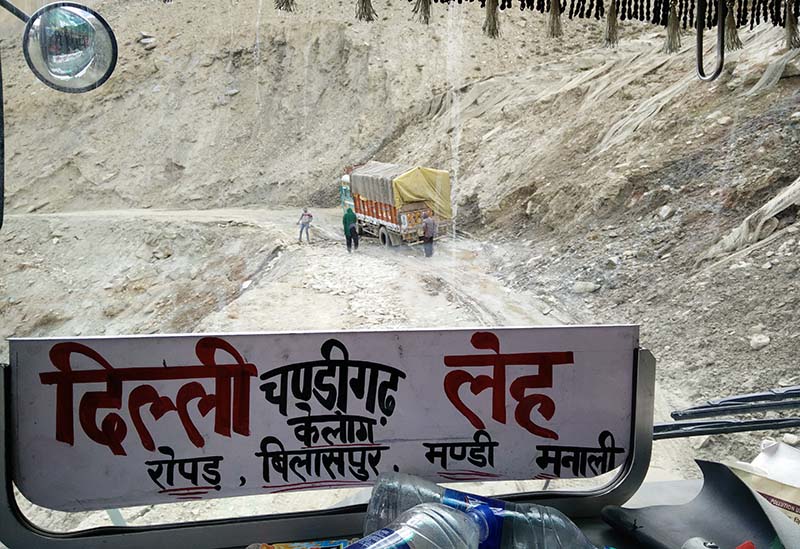 The bus from Delhi to Leh (which had reached there last evening) was parked on the opposite side. It had sent its passengers to Leh through some other transport and the driver had stayed the night on the road.

Our bus could not cross the narrow passage on the road. So we were asked to board the bus on the other side of the truck. The heroic bus driver made the bus do some hair-raising acrobatic maneuvers to turn it around in the opposite direction and we restarted our journey.

We crossed Pang where the bus stops for breakfast. There was general bonhomie on the bus as a couple of passengers were known to both driver and conductor. They were very friendly with other passengers too on the bus. We all shared our food as well as travel stories on the bus.

The bus also stopped a few points for sight-seeing. E.g. at Tanglang La, we stopped for the customary photograph. The drive was beautiful till Sarchu. We descended from hair-raising hairpin bends, cross-roads flanked by thick slabs of ice on both sides also Suraj Taal.

Also read: Leh to Manali Bus Service – How to Book

Sarchu was desolate and disappointing. The road is in dilapidated condition. I could not gather even any sad or stark beauty in that place. The landscape changes suddenly as we enter Himachal though the road does not. The hills become fuller and greener, a big relief to sore eyes especially after Sarchu. The bus crosses through Jispa which is pretty scenic and halts for the night at Keylong.

We reached Keylong at a reasonable time at 7.30 in the evening. Most of the hotels around the bus stand start at Rs. 600 -800 for a single room which I felt too much for a night. A unisex dormitory was available for Rs.100.

Somehow I was not comfortable sharing a room with so many strangers. I had to look around hard and finally, a couple who runs the hotel uphill took pity on me and offered me a homestay for Rs.500 without food. They also run Nordaling Guest House.

They were very selective about the people they take for homestay therefore it is not advertised. The lady was very helpful as she went with me to hunt for my sweater which I had dropped somewhere in search of the hotel. It was found in the first hotel at the entrance of the bus stand. It was being run by a Nepali woman. The local lady was very suspicious about the Nepali migrants like the Ladakhis.

The bus started at 6.30 in the morning. I booked a seat behind the driver. The bus crosses the bridge at Tandi where the two rivers Chandra and Bhaga meet. There were also beautifully laid potato fields all through the Lahaul valley. And the pastoral nomads taking hundreds of sheep uphill for greener pasture in summers.

A local girl sat next to me and she shared about the life of people in Lahaul Valley. She studied in a college in Manali and also helps in farming in her village. She shared with me her story of crossing Rohtang Pass in winters with her father. Also horror stories of people dying while trying to cross the path.

The bus stops for breakfast is at Kokshar, the last village before the ascent to Rohtang La. It felt so good to have delicious warm aloo parantha and curd(Rs. 60) after such a long time. I was majorly surviving on Thukpa in the entire trip to Ladakh.

It takes a long time to come down the Pass as the roads are usually lined with vehicles for few kilometers to get their permit checked to Rohtang La. Finally, we arrived at Manali at around 1 PM.

I hope the write-ups above of the Manali to Leh bus experience were of help. If you have any further questions or need any other details, please feel free to ask in the comments section below or at our Community Forum, and I will be glad to answer.

Thanks a lot Mr Vargis.Khan for your kind information. Now I would like to know whether there are buses from Manali to Leh with a single night halt other than Keylong.If so I prefer Sarchu as it covers half the way.I wait for your opinion.

Hello Varghese, Yes there is a one day bus. Please see the details below.