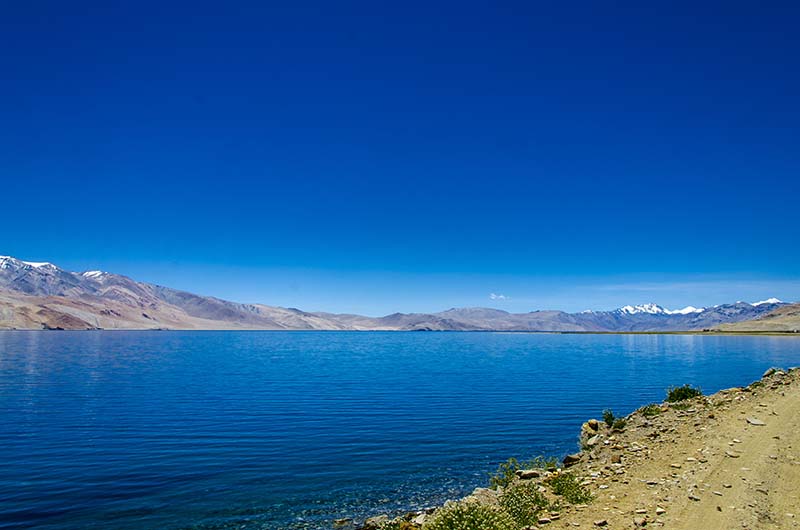 In this article, I will provide complete information on Leh to Tso Moriri Bus service including the timings, schedule, and fare per person. I will also talk about other modes of travel that you can use to travel to the lake other than a Bus.

Tso Moriri is one of the two lakes that can definitely be termed as the crown jewels of Ladakh; the other being Pangong Tso of course. For anyone visiting Ladakh, making Tso Moriri a part of your itinerary, and dedicating a couple of days to visit here is a must. It is not only Tso Moriri that is a sight to behold, but the entire drive from Leh to Karzok is an experience in itself.

Up until a few years ago, the best and probably the only way to get to Karzok from Leh was to either rent a private taxi, or a motorcycle if the taxi was out of budget. Unfortunately, the frequency of Leh to Tso Moriri bus service has not improved still but with the recent boost in tourism in Ladakh, several other options to reach Moriri have come up which I will cover in this article.

One of the frequent questions I get asked is whether Tso Moriri is really worth a visit. People often tend to compare Pangong and Tso Moriri and decide which one should they visit.

Let me tell you that in terms of scenic beauty, Tso Moriri lake is an equal match for Pangong. The fact however is that it has always been overshadowed like it is even now. Pangong has always been considered as the more beautiful lake of the two, and even the connectivity between Leh and Pangong is better than that with Karzok.

This however is one of the greatest reasons why you should give Tso Moriri a visit. In peak tourist season, Pangong Tso has really started to get crowded because of all the recent fame it received. Everyone who comes to Ladakh definitely goes to Pangong and it is getting way too commercialized, to be honest.

Tso Moriri on the other hand still remains one of the lesser-visited and hardly crowded. If you want to witness the same beauty as that of Pangong but with a lesser number of people then you should head straight to Karzok. For more details, please take a look at How to Plan a Trip to Tso Moriri from Leh.

There are a total of 3 buses in a month from Leh to Tso Moriri; on the 10th, 20th, and 30th of each month. All these buses start from 6.30 AM in the morning from Leh and arrive at Karzok in the afternoon.

Fare per person for traveling from Leh to Tso Moriri by bus is Rs. 370.

The bus that arrives from Leh travels back to Leh the next day. So a total of 3 buses are available from Tso Moriri to Leh; on the 11th, 21st, and 31st or 1st of each month. The fare for this journey too is Rs. 370 per person.

I am not sure why even after all the recent boost in tourism in Ladakh, the frequency of this bus service has not improved. These 3 dates of course do not fit into everyone’s schedule which makes a trip to Karzok difficult for someone traveling by public transport. Fortunately enough, there are other ways that you can travel by.

Also read: How to Travel to Ladakh on Budget by Public Transport

There are two types of taxi services available between Leh and Karzok; private and shared cabs. A private taxi is of course when you have the entire cab all to yourself and you can travel as per your own itinerary and convenience. The thing with a private cab however is that it can be way too expensive and cannot be called an option for someone traveling on a budget.

The second choice is to travel by shared taxis. These are available from the main Leh bus stand every morning and are a great budget choice to travel to Karzok.

This is another great choice if you know how to ride a bike around in hilly areas. Depending on which bike you chose, a motorcycle on rent in Ladakh will cost you around Rs. 1200 to Rs. 2000 per day. There are plenty of rental agencies and mechanics these days offering bikes on rent. Just take a stroll around the city, test a few bikes, and rent the one that seems most reliable.

I hope the information on Leh to Tso Mori Bus service above was of help. If you have any questions, please feel free to ask in the comments section below and I will be happy to answer. You can also follow me on Instagram and chat with me live there or subscribe to my YouTube channel and ask a question there.

Hi Vargis, thanks for this blog. Yours is one of the few ones with information about Tso Moriri and Tso Kar route. Are their shared taxis coming back from Tso Moriri to Leh every day?

Hi Vargis!
First of all I want to tell you that your blogs are really good and informative! Thanks for writing them.
I wanted to know if there are shared taxis available from Merak to Tso Moriri? I am planning to visit Pangong (Merak) – Tso Moriri – Leh.

Thank you for your kind words Khilti. There are no shared cabs or any other form of public transport available on this route.

Hi vargis bro! Will all these buses and shared cab facilities be available in the first week of May!

Hi Sundhar Bhai – The buses may not be available in the first week of May but you can easily find a shared cab.

Thank you for a really helpful article and blog full of useful travel tips.

One question re. the shared taxis Leh -> Korzok. Do these really depart every morning from the bus stand and all one needs to do is to show up or some prearrangements are needed.

Yes, it is a daily schedule. Just reach the bus stand, find a cab going towards Karzok and hop on.

Hey, I am visiting Leh to collect water samples from Tso Morriri and Tso karr. How can I plan a trip from Leh? Can I do a round trip covering both lakes? If yes how are the rates for shared cab from Leh?

Yes, you can reach Tso Moriri via Chumathang and then return to Leh via Tso Kar. For taxi charges, please contact Nasir @ 9906229203.

Thanks a lot for the quick reply

Hello, can you please suggest which month would be the best time to visit ladakh where we could experience snow mountains near pangong lake…Actually we are planning on July 20th..Is this the best time?

Yes June is good but September would be better

Thanks a lot for your immediate reply khan bhai.
We thought that there would be rainfall in the month of september, so we dint plan in that month.
Actually Im travelling there for the first time from hyderabad with my family only for 9 days due to leave constraints ( hyd – srinagar – kargil – leh – pangong – leh – nubra – leh – srinagar – hyd ) and willing to do the entire journey in public transport.
Will that period sufficient?
We are planning in the month of july not in june and wishing to experience snow mountains near pangong lake which was our dream place.
And seeking one last suggestion from your end, can my parents (age 55) travel there to nubra, pangong which are at high altitudes?

Hi Sushmitha – 9 days from Hyd and by public transport is too less and very hectic, specially when you have your parents with you. You should either add more days or rent a private cab for the trip. And no, it doesn’t rain in September. Monsoon is all gone by late August.

I’m planning to go by bus in the morning and return by shared taxi on the same day, to avoid staying.. please let me know whether it’s possible

It is a big IF, there is no gurarantee. You may get it from Diskit and Pangong but yes, Tso Moriri will be a problem. Best would be to boars a shared cab from Leh itself that is planning to return on same day.

Hard to tell you like this. You will know when you get there and see all the cabs and other vehicles parked. It is around where the lake starts though. Fare would be about 400 to 500 Rs. per person.

Thank you so much for the help!!

Thanks for your quick reply.I have to reach leh by 1 of June.How can I reach there from Kaza.Is the Manali leh route open .If not when it is expected to open.can I get a share jeep from Ke long for leh if the roads are open .

Manali Leh route is not open yet but is expected to by May end. Availability of Bus and shared taxis depends on if the road opens within May or gets delayed.

I am at Kalpa right now.I have a plan to visit spiti velly and then proceed to Leh from there.What is the road condition.Are the regular HRTC buses started playing to Leh from Kaza.
If not then by when are they expected to start playing.

No direct bus from Kaza to Leh. You will have to do to first reach Keylong and then board a bus from there for Leh. The bus service will not however be operational at least until early June.