Embarrassment. Yes, that is, in fact, the correct word to describe the newest Netflix offering for the Indian audience. They decided to call it ghost stories Netflix but it is more like crappy stories on Netflix. By the time it ended, I was left thinking about what did I just watch and why? Why the hell did I just waste two and a half hours of my life? What did we ever do to the four directors of this crappy movie to deserve this?

Ghost Stories 2020 is an anthology horror film, consisting of four short film segments directed by Karan Johar, Dibakar Banerjee, Zoya Akhtar, and Anurag Kashyap. The reason why I used 2020 here because there is another movie by this name from 2017 starring Martin Freeman. That one was actually a decent enough watch but the Indian Ghost Stories is a complete catastrophe. Forget about any jump scares or spine-chilling moments. The only feeling you will get is of a headache. This movie is painfully lame.

The movie serves a sequel to the 2013 and 2018 films – Bombay Talkies and Lust Stories respectively. I think this should actually have been a sign enough for me to steer clear of this one but I still decided to watch. 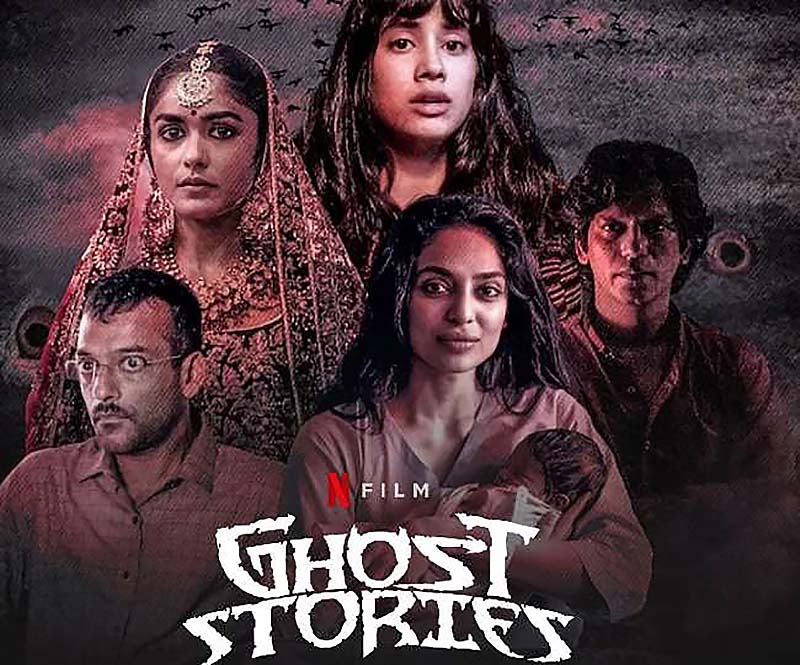 The first story is directed by Zoya Akhtar and is probably the shortest of all. I think the reason why they decided to keep it as the first one is that if they took the risk with any of the other three, the viewers would have stopped watching this circus in the first 15 minutes only. The first story is actually the only one that looks like an OK type ghost story and gets your hopes up that maybe the next story will be a better one. But no, that never happens.

The words that describe the second story the best are “Gross & pointless”. I mean what the hell were they thinking? There is one scene in the second story that was sickening to watch. I am not going to mention it here but you will know when to watch it. The story too made no sense at all. I did not even understand what the point of it was and what the hell really happened. It was definitely not a ghost story because there was no ghost or anything involved. It just tells a tale of a woman losing her senses but in a very disgusting manner.

The third story is a Zombie tale. This one too was gross and pointless. The story starts in a promising manner, will get your hopes up and then will fall flat on the face. It is a zombie story but without a head or tail. I think they wanted to end it in a ‘twist ending’ manner but I couldn’t care less.

The last story was directed by none other than Karan Johar. So yes, there is a lot of ‘F’ word involved and sex talks involved which you can tell was completely unnecessary. The profanity is the only thing that makes the story stand apart because the other three were missing it. In terms of the story, well, I wonder if there really was one. The male actor in that story really needs some acting lessons.

In the end, what you get is two and a half hours of pointless watching. There are no jump scares, the gore is gross, no ghosts involved and the stories are slow and boring. They could have easily wrapped this up in 90 minutes but I do now know why this was dragged for two and a half hours. Acting is mostly bad, the direction is boring and the narrative is poor. Save yourself some time and headache and skip this one. Watch something else; there is plenty of other interesting stuff available on Netflix.