I am sure not a lot of people will agree with this Altered Carbon review of mine. I am assuming this on the basis of the high ratings this show has on IMDB. But then IMDB ratings cannot always be trusted and can also be a setting for paid reviews. For me, this show was surely one of the most boring ones I had ever seen. So boring in fact that I had to force myself to finish watching it.

Why was I forcing myself to see it if it was indeed so boring? That is only because I wanted to see where was it heading? I was hoping that maybe a bad show will finally redeem itself with a good ending but even that did not happen. But in the end, it just falls flat on the face.

They tried to make up for a bad story and acting by parading people in nude but even that did not work. If you want to sell nudity then at least get women who have a body for it, not the ones that looked even uglier without clothes than they did in them. 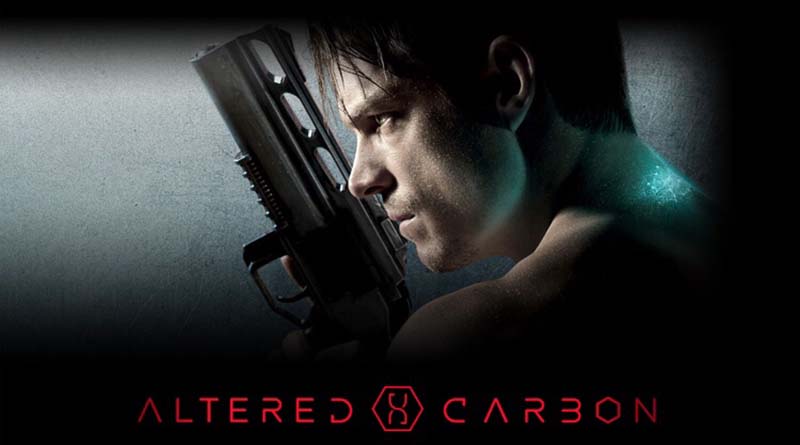 For a brief overview, Altered Carbon is a web television series produced by Netflix. The first season was made available for online streaming on Netflix in February 2018 followed by a second season in February 2020. The story is based 360 years in the future; in a world where consciousness can be transferred to different bodies. The protagonist, Takeshi Kovacs, a former soldier turned investigator, must solve a murder to earn his freedom.

The first season was of 10 episodes of about an hour length and received mostly positive reviews. The second season however was met with much harsher and negative feedback.

The series is based on a novel of the same name and is said to be the most expensive Netflix production to date. Its total cost was estimated to be more than the first three seasons of Game of Thrones.

Is it any good though? I do not think so. I know I am going against the tide here but to me, the show was extremely boring. It had nothing to keep its viewers engaged. It was a murder mystery and being that it should have been an edge of the seat thriller to be rated so highly. But to me, it was nothing more than a cyberpunk fantasyland where the murder mystery takes a back seat to the show’s futuristic visuals.

I tried to watch this show about a year ago but completely lost interest after one episode and stopped. Then a friend of mine recommended it to me a couple of weeks ago and I decided to give another try. After episode 3, I again lost my interest but then decided to keep going because I had nothing to do over the weekend and I wanted to see how the mystery would unfold. Now I am regretting to have wasted 10 hours of my life on it and wishing that I had stopped when I wanted to.

Every actor in the show is a shining example of pathetic acting and wooden faces. There is just no emotion at all. There was absolutely no character building involved, no depth or substance, and absolutely no meaningful background. It was supposed to be a murder mystery that should have intelligently followed an investigation. But rather, what you get is an overly complicated plot with a ridiculous ending.

The nudity was absolutely unnecessary and distasteful. We as viewers would be more interested in watching the face of the hero and his acting rather than his naked butt all the time.

Another problem is the excessively long runtime. I think it would have been much better if they tried to wrap it in maybe 5-6 episodes. There was a lot of unnecessary trash that can be easily edited out and limit the show. I think if you watched the first two episodes and then the last one, you will still get an idea of the plot and knew what happened.

The visuals were good but that just wasn’t enough. It does not make up for plain and boring characters and horrible direction.

By the time this show ended, the only thought in my mind was that how could it be rated so why? And why the hell would they renew this piece of trash for a second season?  I am a science fiction fan and a sucker for murder mysteries; but this cyberpunk nonsense is neither science fiction nor an interesting whodunit. In the end, it is nothing but a mix of terrible acting, bad dialogues, and a complex storyline. The setting of the show may be interesting but the story itself is boring. Save yourself some time and avoid this one.