written by The Churchills August 7, 2021

September 7th was a morning after what one would call a “draining” day. We were supercharged to ride to Turtuk Village – a small village beyond the Nubra valley, that we had heard some captivating stories about. Thankfully, we were feeling much better today but we still flirted with mild altitude sickness, an ungainly acquisition from the last day after riding through Khardung La pass.

Diamox had worked its magic and a night’s rest helped a lot to subdue the effects of altitude sickness. Once the breakfast was done, we were ready to start our ride for the day from Olgok Guesthouse in Hunder to Turtuk Village, located at the Nubra valley of Ladakh. For more details on this small hamlet, you can also take a look at How to Plan a Trip to Turtuk Village from Leh. 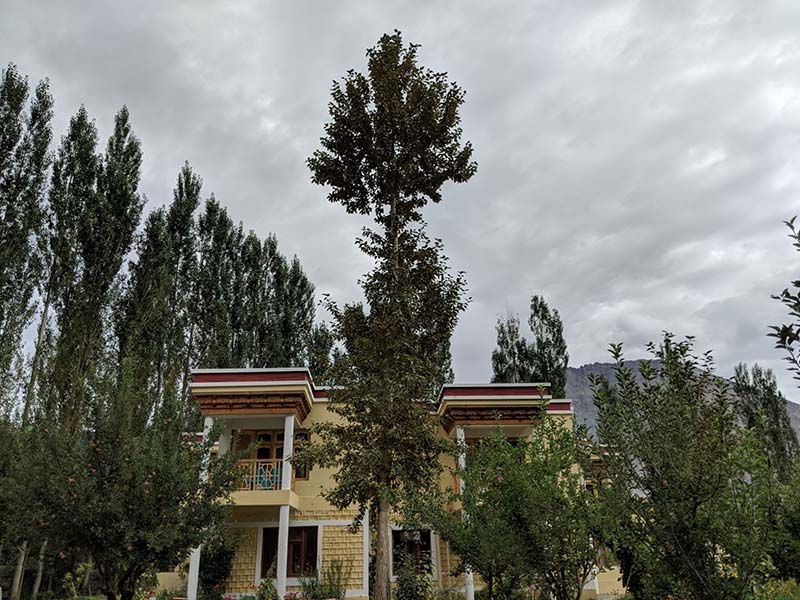 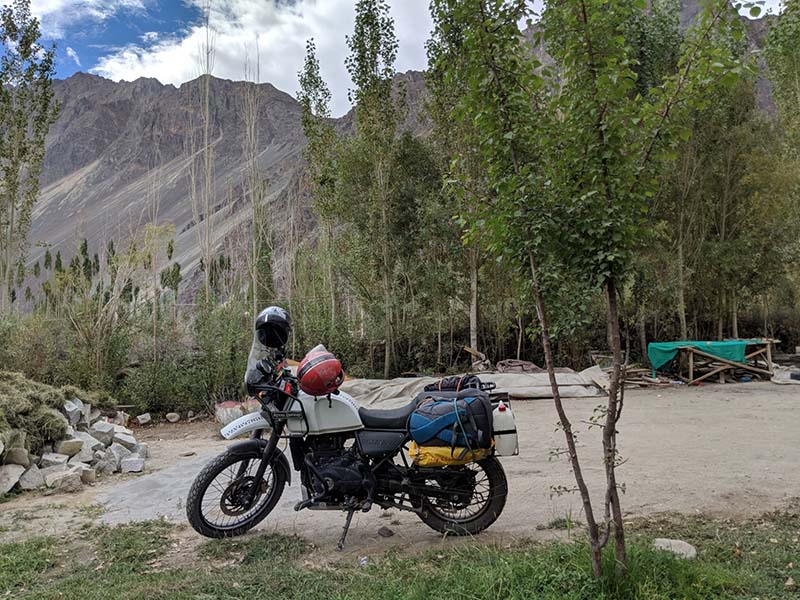 The road to Turtuk passes through Thoise, Skuru, and Bogdang. These are three reasonably sized villages along the Shyok river.

When we entered the village of Thoise, we were greeted by signs that read “Trespassers will be shoot without warning”. Yes, you read it right and it is not a typo.

Photography was strictly prohibited, and we realized that Thoise is the last Indian military airfield in the region. It stands for Transit Hold of Indian Soldiers En route (to Siachen glacier, which is located at an altitude of over 5500m at the Line of Control).

The ominous sign, the sight of the airfield and the numerous soldiers, and just the atmosphere that you could feel was filled with patriotism, left us with abundant pride.

Also Read: How to Plan a Trip to Ladakh – A Complete Travel Guide

After crossing Thoise and the little village of Skuru, the Shyok River decided to cross its path with us. It was flowing right next to the road all along until now.

We stumbled upon a beautiful bridge with a milkish blue water, rushing down from the glaciers in the mountains, underneath. The splendid sight brought our wheels to rest. We had to click numerous shots, something which we had been doing like maniacs from the moment we landed at Leh.

Shyok, “the river of death”, was our tour guide to Turtuk 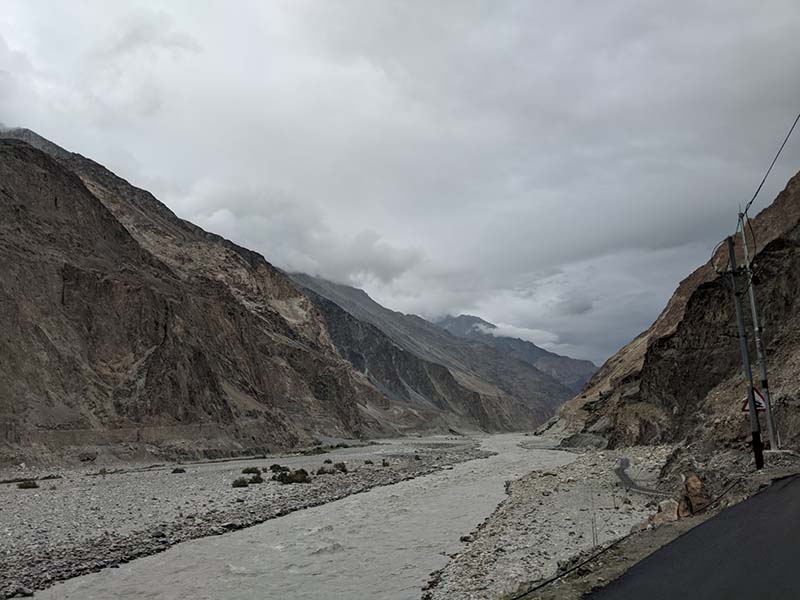 When the apprentice joins the master! Convergence of the milky glacier with the Shyok river. 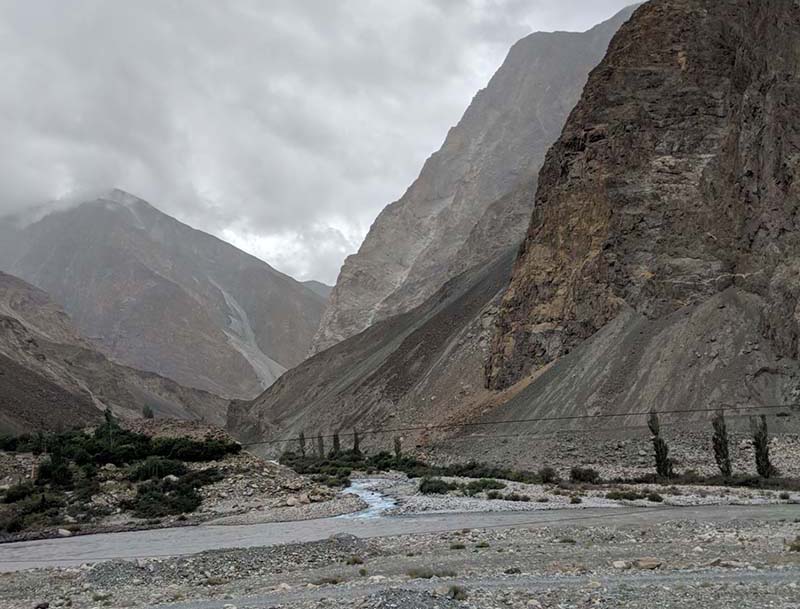 Just a few kilometers further, we rode through Bogdang. This is the place where you start to see tall but tender Baltis instead of the short and charming Ladakhis.

Bogdang was all smiles as we went past cheerful boys and girls, who were just returning from school in green uniforms for a lunch break. The massive cultural change and the prayer calls from a nearby mosque whispered that we were close to our destination.

Also Read: What to see in Nubra Valley

Calling the 82 km stretch from Hunder to Turtuk just “scenic” would be a massive understatement. It was breathtakingly spectacular! This, here, is the cute little village of Bogdang en route Turtuk. 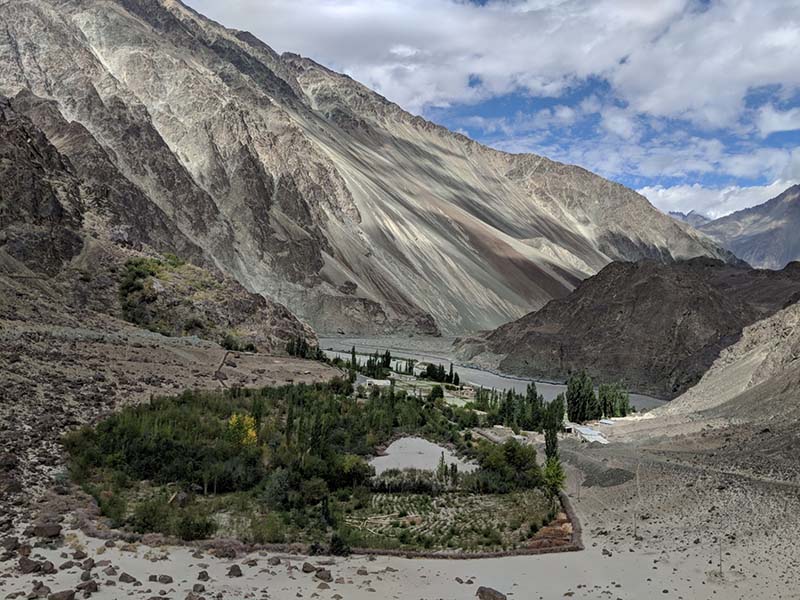 We realized during the ride that even a bridge can blow you away at first sight. We were “pontists” thenceforth. 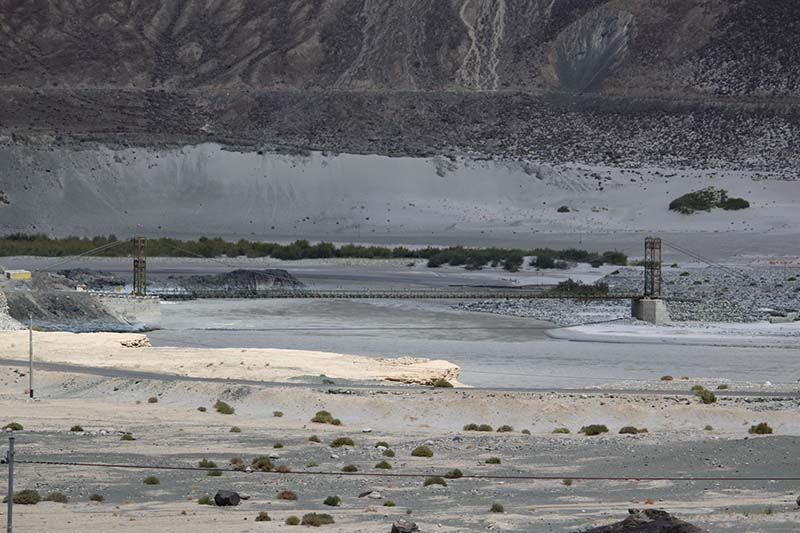 We reached Turtuk in the afternoon, after a ride of about 4 hours with multiple memorable stoppages. Turtuk is the northernmost village in the Ladakhi region at the Indian border and was part of Gilgit-Baltistan (of Pakistan) until the Indo-Pak war of 1971.

It opened to tourism in 2010. As if the harshness of its geography was not enough, Turtuk is often the heart of the conflict between India and Pakistan in the region.

The people of the village have endured extreme situations over generations; surviving through the intense wars and innumerable moments of tension between the two, supposed to be brotherly, nations.

It is the knowledge of this adversity that left us dazzled, how could people who have endured so much in life, could still be with such charm and grace.

Now, the village itself was located across the Shyok River. It is connected to the road by a couple of suspension bridges, which you could walk on but not ride.

We parked our motorbike near the bigger bridge of the two and started to walk, carrying all that we had brought with us, towards the village. There was constant drizzle throughout the day, nothing that we complained against, as it lifted our mood furthermore.

Once in Turtuk, the walk through the really narrow lanes of the village – with water flowing by the side to aid the green fields and apricot trees, greeted often (and guided at times) by both the elderly and the budding Baltis of Turtuk – is the best thing one could do within the village.

There were several places of attraction though, like the historic Polo ground, the 16th-century mosque, and so on, but we chose to not get ourselves too busy.

We arrived at Turtuk, and the photos started flowing 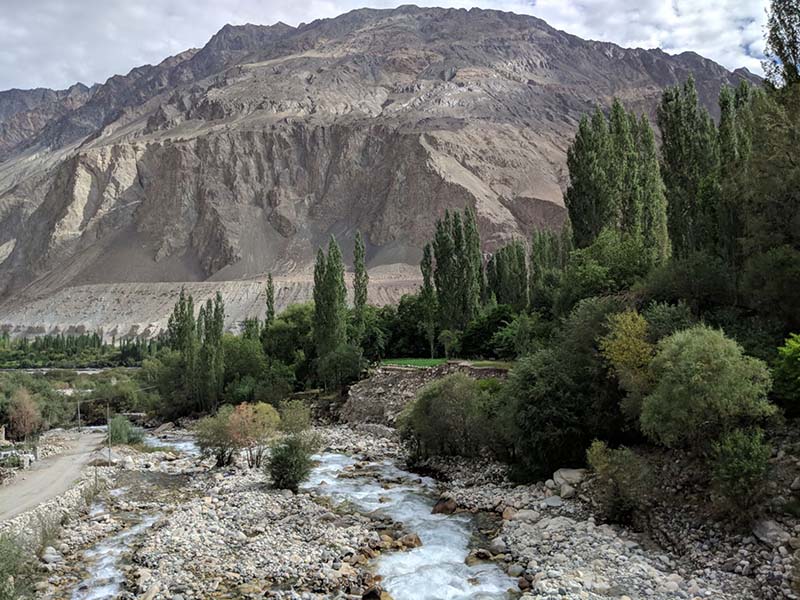 The beautiful suspension bridge to the village 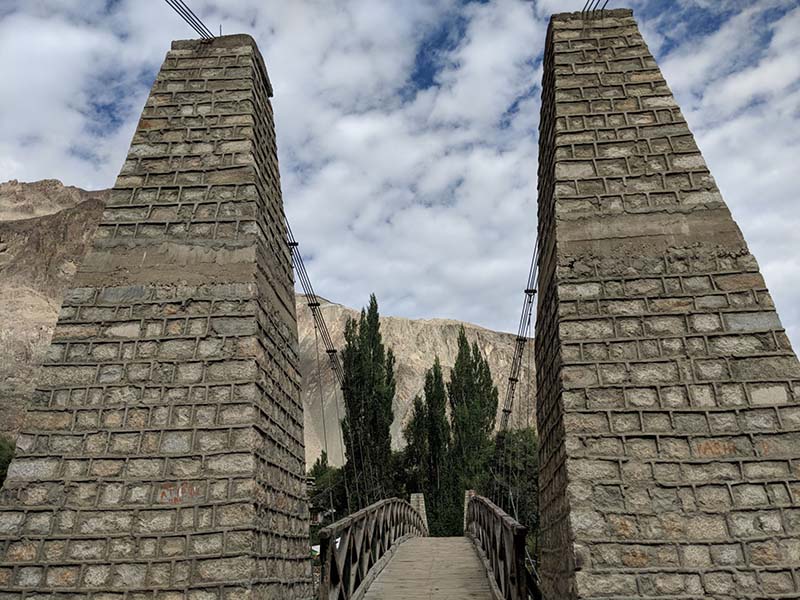 Nature adding to its masterpiece a touch of Flora 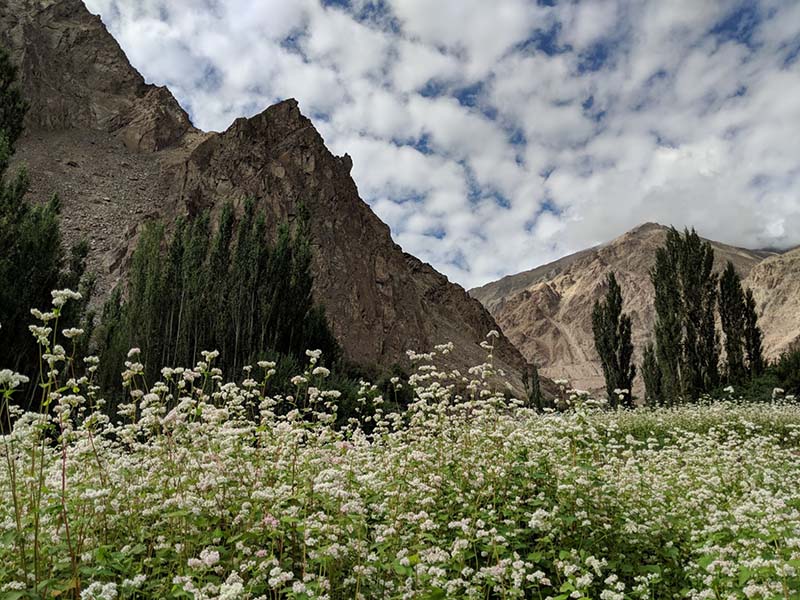 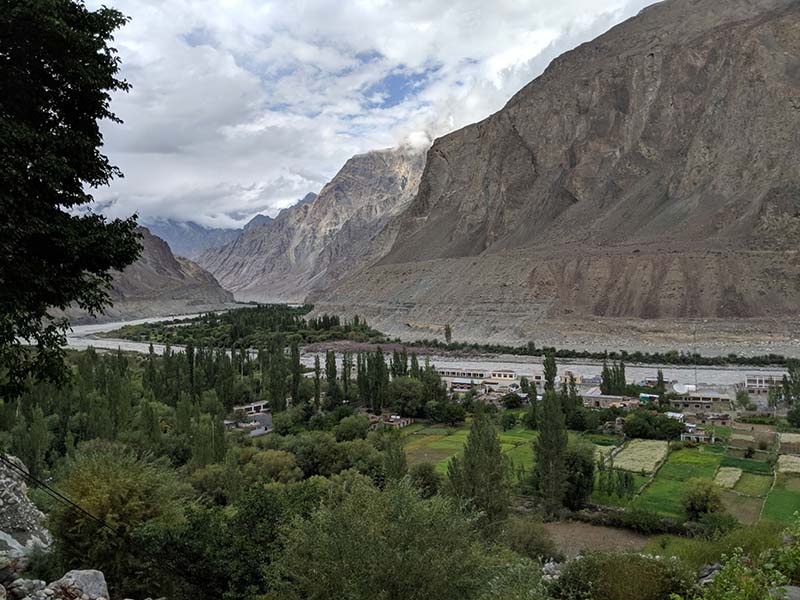 The view at dawn from our room @ Maha Guesthouse 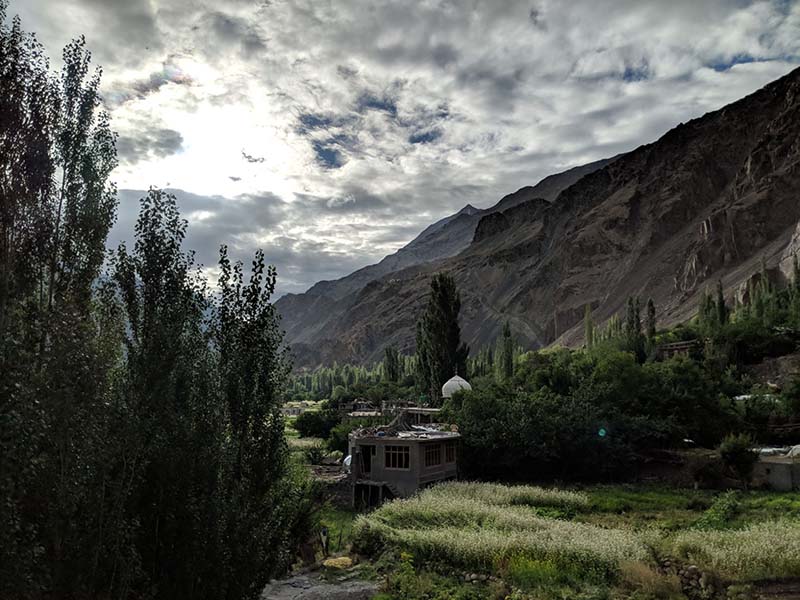 We reached our stay at the Maha Guesthouse to rest awhile, thanks to a good old man who walked with us all the way. Maha Guesthouse was a place that one would quip “not bad” in normal conditions. But is a great option to stay in a place like Turtuk.

The room was comfortable and warm. The restaurant was decorated with thriving sunflower plants. It provided a good ambiance and the food was pretty decent.

We loved to have their apricot pancakes, the best we had tasted in Ladakh. We loved it so much that when a friendly farmer nearby offered us apricots from his trees, we couldn’t say no. Having gotten ourselves refreshed and rejuvenated, it was then time to visit Thang.

Thang is the farthest point of the Turtuk sector towards the LOC, after which it was all Pakistan. We surrendered our identity cards at an army check post on the way and showed our special permits to Thang to the officers. We were given a few words of wisdom (or orders?) by one of the officers and made our way towards the last village.

The journey got just a bit tricky for us. We missed a turn near a bridge and headed straight towards the restricted part of LOC. Then we spotted some vehicles on the other route and decided to reroute.

To remind us of the remoteness and the harshness of the conditions, the road was turning worse. At one point there was nothing but a steep path laid with small rocks and gravel to roll over. We wouldn’t let our spirits down though and hustled our way to the last post at Thang.

It was 5 pm when we reached, and the honorable Jawan who was holding guard there was just about to leave for the day. As soon as he spotted us reaching the place, he kept his things back and came to us with a bright smile to quickly guide us through.

That moment was like “Wow!”. We had just witnessed the ultimate courtesy a soldier could show, and we felt so humbled and honored.

Also Read: Hitchhiking to Pangong Tso and Return to Leh

We looked through an array of little scopes (can we call them “guide-oculars?”). Each of them was pointing at an army post, high and far in the mountains, some of India’s and some of Pakistan’s.

The unobscured view of mountain ranges with Shyok running through was itself a sight to behold. To know that we have divided these mountains amongst ourselves with hostility made us spend a few minutes of silence.

We wondered what we’ve been doing to this lovely planet we live on. With dusk lurking around, we clicked a few pictures and started our way back to Turtuk to call it a day.

The picture speaks for itself. 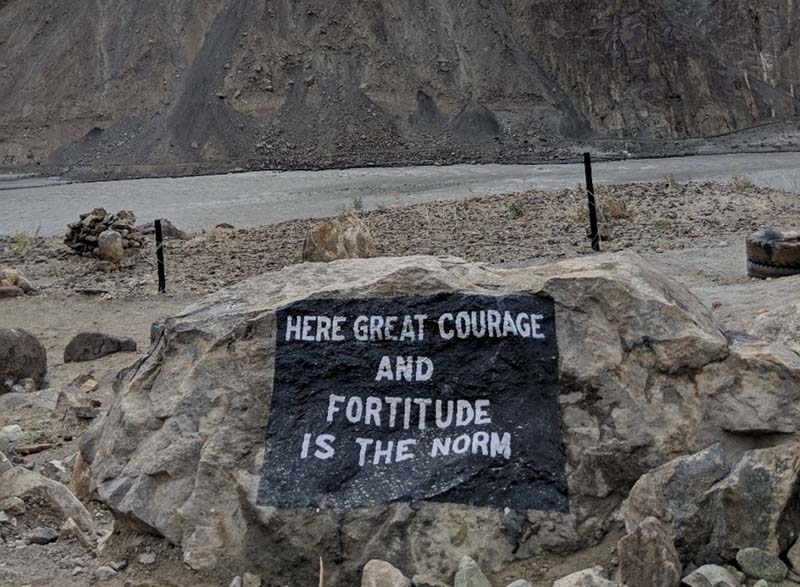 No sooner than we were awestruck by the view, we got moved with mixed emotions, as we realized the gravity of the situation. Spot the Indian bunkers along the Shyok, as it bids farewell to India and enters Pakistan. 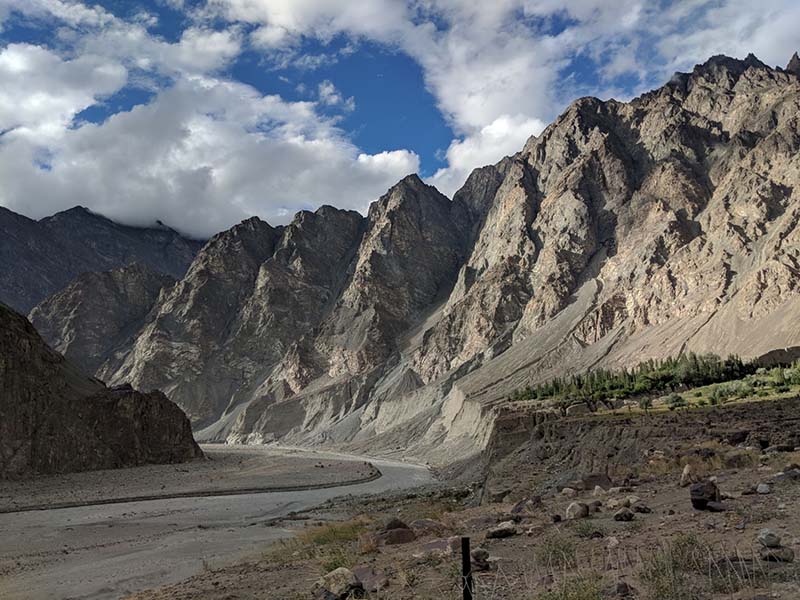 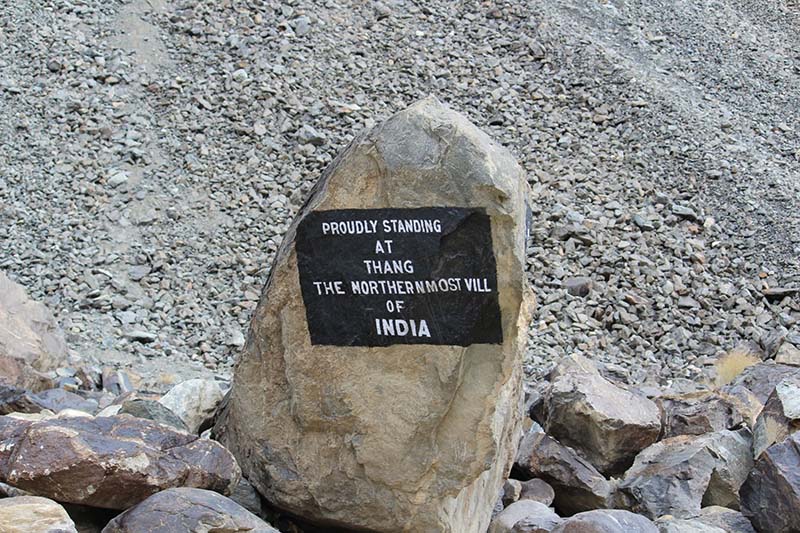 The last accessible post at Thang. Greenery at distance is the actual village, which you can only view from a distance, just meters away from LOC! 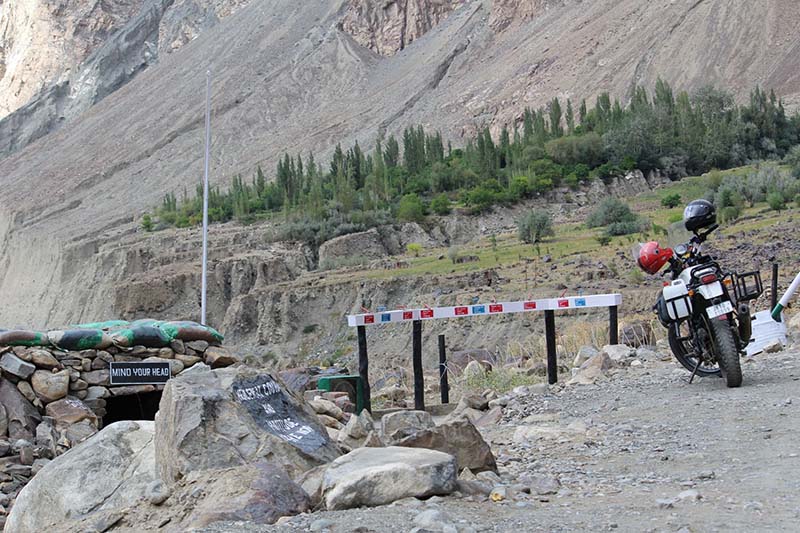 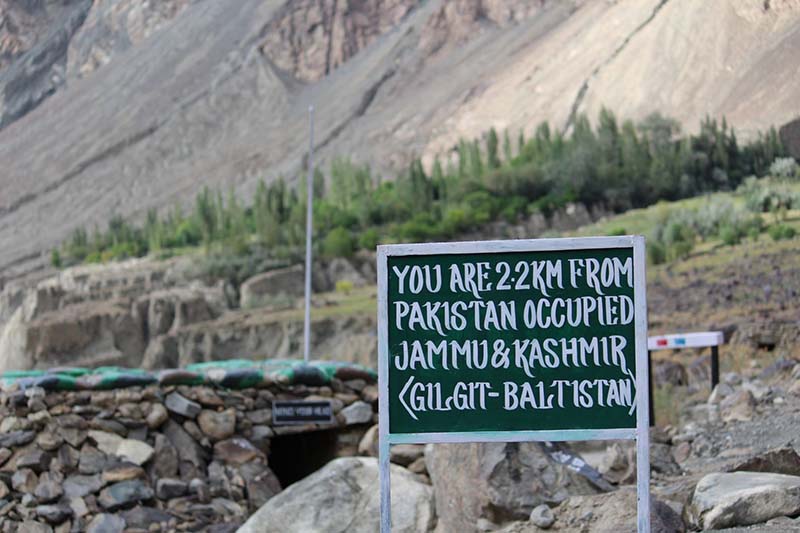 The last of the Indian bunkers by the Shyok river. Talk about living at the edge! #respect 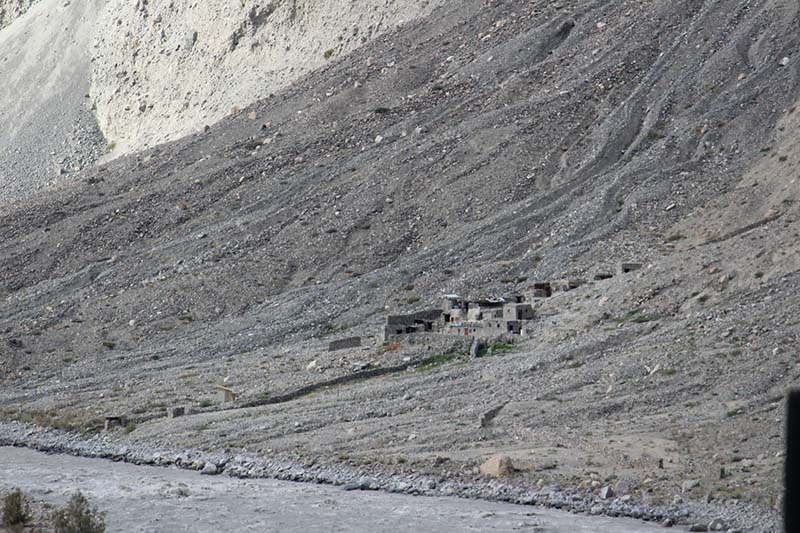 Scopes to sight the military posts on top of these mountains. Can you believe that the peaks here are split between India and Pakistan? #humans! 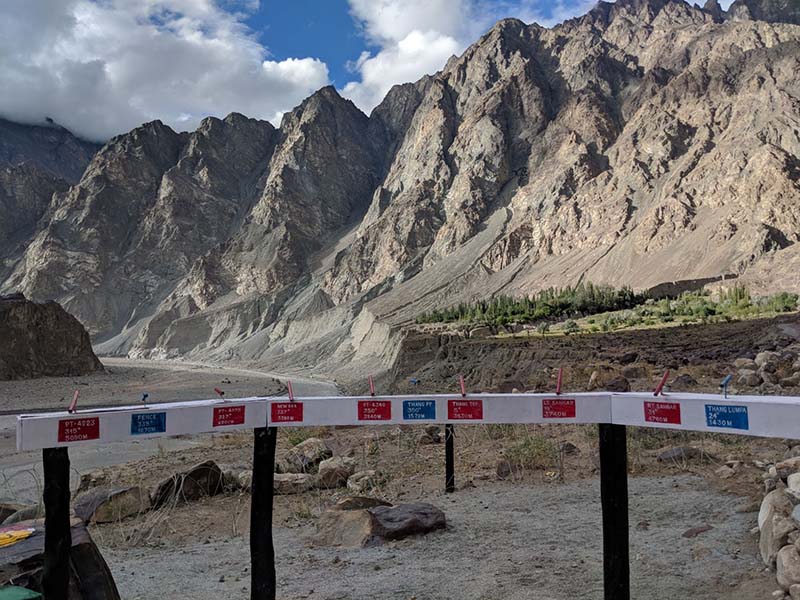 As if it weren’t a heartfelt moment already, we saw a military truck dropping children from school at their remotely located homes. The soldiers were giggling and waving ‘Julley’ to their little friends.

To think how far we were from these treacherous conditions, feeling safe and happy at our homes, brooding over what went wrong with the boss in the office, and to realize how far the armed forces go to keep us at that safe distance crushes us to shed a tear or two every time.

Thus ended our first date with the serenely beautiful village of Turtuk. When we hopped on our motorbike at the day’s start in Hunder, we had indeed expected the travel to be great, just like any other in Ladakh, but it turned out epic.

The scintillating ride on the winding roads, those that tend to feel small but private. The occasional convoys of military trucks, that would gladly give you way without a honk and wave as you pass.

The weather – oh boy, was it heavenly or what. The temperature was hovering at the border of single digits in the ‘+’ direction. The occasional breeze would bring a few droplets of rain to kiss your cheeks and the barren rocks. The Shyok river that is always gushing beside you, and the godly Himalayas all around you, that doesn’t miss a blink of yours.

The beautiful little village and its truly amazing people – whoa!. This enchanting experience at Turtuk Village was all we had hoped to gain out of the entire trip to Ladakh, and a bit more.

Julley, and Jai Hind! If you have any questions about visiting Turtuk Village, feel free to ask in the comments section below or at our Community Forum, and I will be happy to answer.

IT professionals by chance but travellers by choice. We are from Coimbatore, Tamil Nadu and we love to call ourselves The Churchills.

How does one get to turtle and thang without a self driven vehicle ? Also, any suggestions on budget stays in turtuk?

There is a bus from Leh to Turtuk that you can board. But for thang, you will need a private taxi or Bike

Hi bro, I’m planning to visit Thang viewpoint (POK border) from Turtuk village on my trip next month. What are the things required ?

Nothing in particular Raj. Just your regular inner line permit

Normal IL permit that can be obtained from DC office, Leh is valid till Turtuk and how can we obtain permit to reach the last point near Thang?

We have 2 days for nubra valley. Is the below itinerary of ours doable. 1st day start from Leh & travel upto Thang and Halt at Turtuk. 2nd day visit Hunder sand dunes , Diskit Monastery, Panamik Hot springs and Halt at Panamik. 3rd day morning we are leaving to Pangong. Please advise us with suitable itinerary. Thank you.

Yes it is definitely doable but make sure you are starting from Leh by first light of the day.

Thank you Bhai for your immediate reply.

You are welcome Bhai !!!

September would be best Sandeep