Snowfall in Gulmarg – When it Snowed all Day Long

We wanted to see snowfall in Gulmarg but definitely not the way it happened. We were supposed to travel from Gulmarg to Pahalgam but the heavy snowfall actually had me wondering if we would even be able to catch our flight from Srinagar the next day.

Was it beautiful? Yes. Was it fun? Definitely. I know I was a little scared about our planning at that time due to the sudden change in the weather. But in the end, it only made the entire experience even more memorable.

On Day 1, We caught a flight from Delhi to Srinagar in the early morning hours and then booked a cab straight from the airport to arrive in Gulmarg by noon.

Our Day 2 was spent enjoying a snow-covered Gulmarg in January and visiting some of the local tourist attractions. You can click on the link above to read the previous parts of the travelogue.

It had started to snow the night before as soon as the sun went down. The intensity of the snowfall increased in the night and it continued to snow all night long. The temperature dropped drastically and it was freezing all around.

I woke up a few times in the night and could hear the high-speed winds outside. To some extent, it was even a little bit scary.

There were three heaters working in the room all night. Even then, we were sleeping with our jackets on and had to cover ourselves with three blankets.

There was one large heater installed in a corner of the room. The second one was a small blower. The third and the most helpful one was installed in the bed itself.

That’s correct, you read it right. This heater would warm up the mattresses and probably was the most helpful one of the three.

After a cold but comfortable night, I was again the first one to wake up in the morning. Once again, the same routine followed as yesterday.

I called the hotel kitchen and they told me there won’t be anything available until 8 AM. So I packed and wrapped myself well and stepped out of the hotel to have a cup of tea at Sohail’s restaurant. 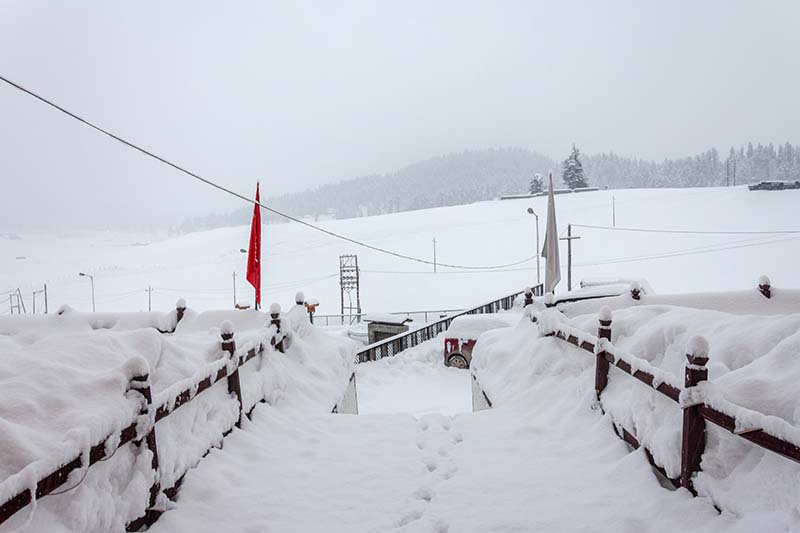 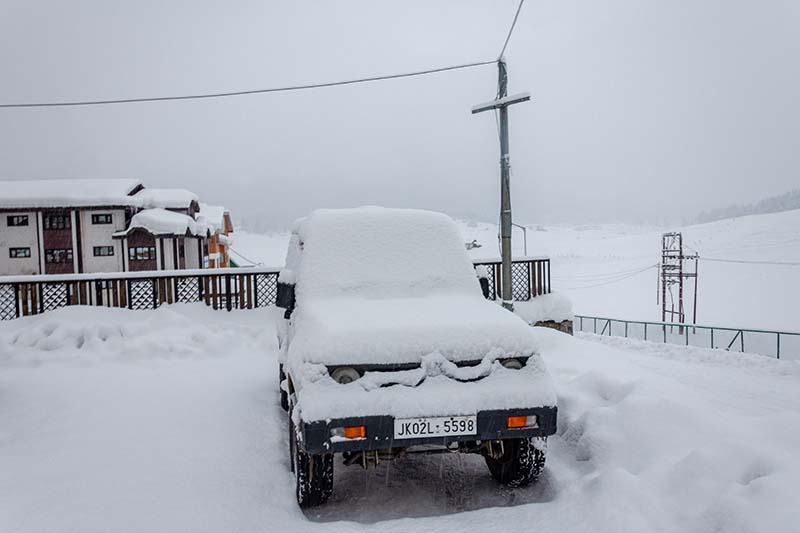 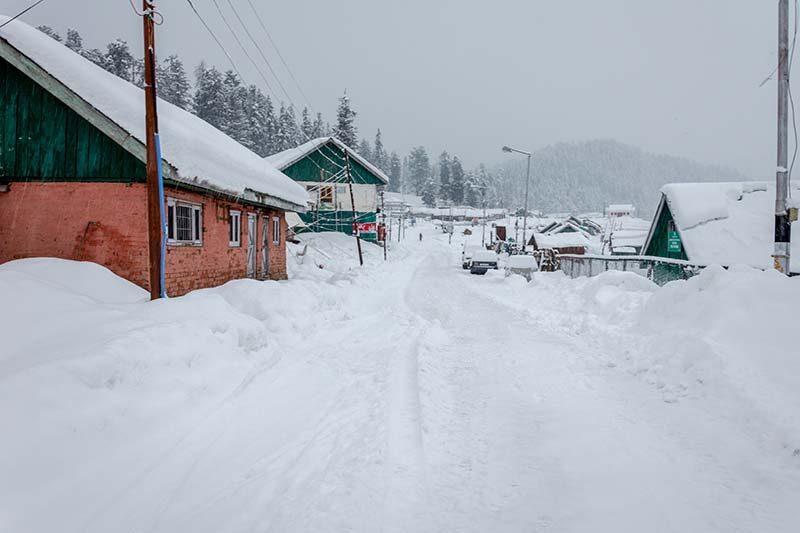 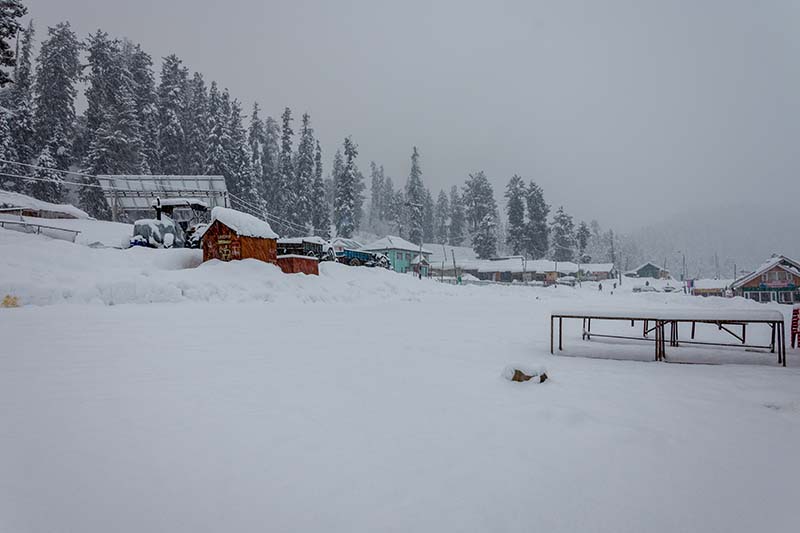 It was still snowing out there and this morning was an even colder one than yesterday. Everything was covered under a fresh sheet of snow.

In some places, I had to navigate my way through knee-deep snow. Treading carefully, I finally reached Sohail’s restaurant to find him clearing snow from almost everything. 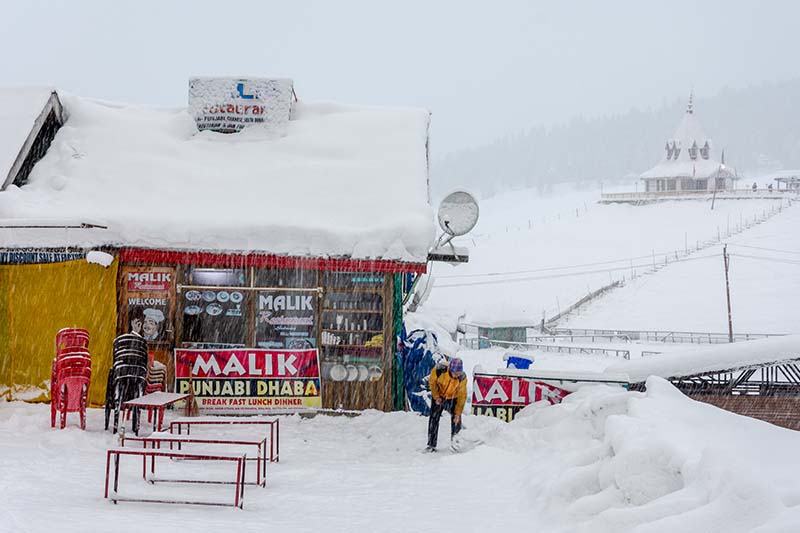 I had a cup of tea and sat in the restaurant for a while chatting with Sohail. My plan for today was to go for a Gondola ride. But seeing how the weather turned overnight, I wasn’t sure if the Gondola was even going to remain operational today.

I asked Sohail and he advised me against going for the ride. Not because it was dangerous or anything but would be a waste of money.

The weather was really bad and it was foggy all around. Riding the Gondola in this weather would have meant just sitting in a glass cabin and going up and down for Rs. 1600 per person; without being able to see anything.

The second logic that Sohail gave was that we were just going to find snow up there, which was down in Gulmarg as well in plenty.

If we went for the Gondola ride, then we would just ride up to the station and come back down. We surely won’t be able to step out and explore because everything was under several feet of snow.

There was no way of knowing where I may step which made it a bit dangerous as well.

So I agreed with Sohail and gave up the idea of a Gondola ride. This made me wonder what we were going to do all day today in this weather.

The biggest mistake I made was that I did not notify anyone in Hotel Affarwat that we were going to extend our stay by a day. After chatting with Sohail, I came back to our hotel and woke up my cousin.

The manager at the reception casually asked me where I was headed today and I told him nowhere. He replied that they were under the assumption that I would check out today and had taken other bookings.

This meant that I would have to check out of Hotel Affarwat while the snowfall in Gulmarg was still on.

This kind of disappointed me a lot and I asked the manager to manage my stay somehow. They were however completely occupied for the day and could not accommodate me.

He however did not let this become trouble for me and asked me to shift to another hotel nearby by the name of Hotel Royal Park. But before I did that, I stepped out myself and checked out a few other hotels myself.

Mountain View, Gulmarg Inn, and Welcome Hotel were the three I checked at but did not like either of them. Finally, I went and checked the rooms at Royal Park and they looked good enough.

The manager at Hotel Affarwat made a call to the manager at Royal Park. I got the room for the same price that I would have paid at Affarwat.

He also had a couple of his men bring our luggage so all that we had to do was walk a few hundred meters and go into another room.

I really liked this about the guys at Hotel Affarwat. Even though they could not extend my stay, they still got me another good hotel at the same price, shifted my luggage, and ensured that the move was of minimal hassle to me.

Hotel Royal Park was just 5 mins of walk away. What I liked about this hotel however was that it was at a slightly greater height and provided a better view of Gulmarg town. 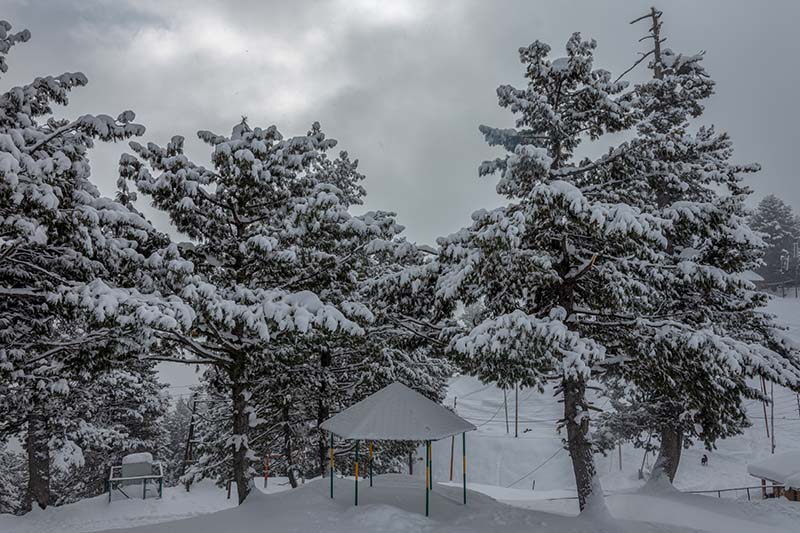 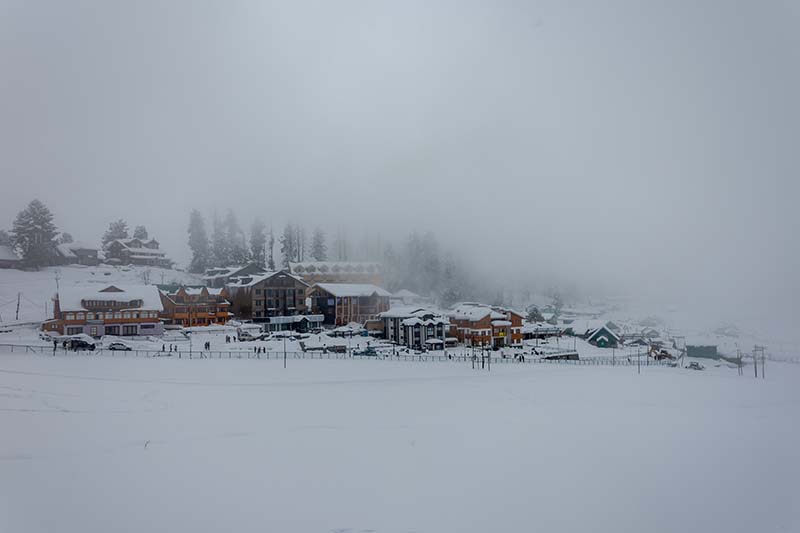 Walking Around in Gulmarg

It continued to snow until noon and the intensity increased even more. Visibility too was quite low and there wasn’t much we could do but to sit at our hotel and enjoy the view. 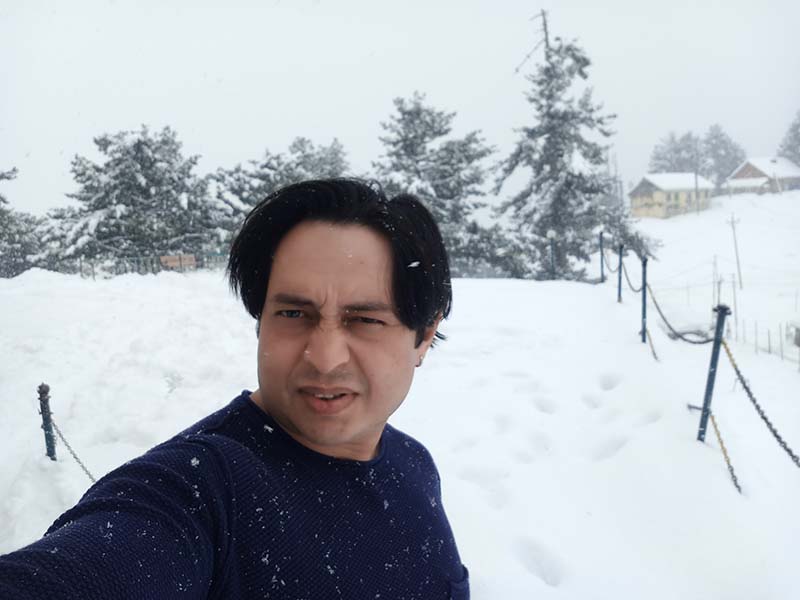 Thankfully, the snowfall stopped at around noon. The sun was still playing hide and seek but the visibility improved tremendously. Bored of sitting at the hotel, we too came out for a walk. 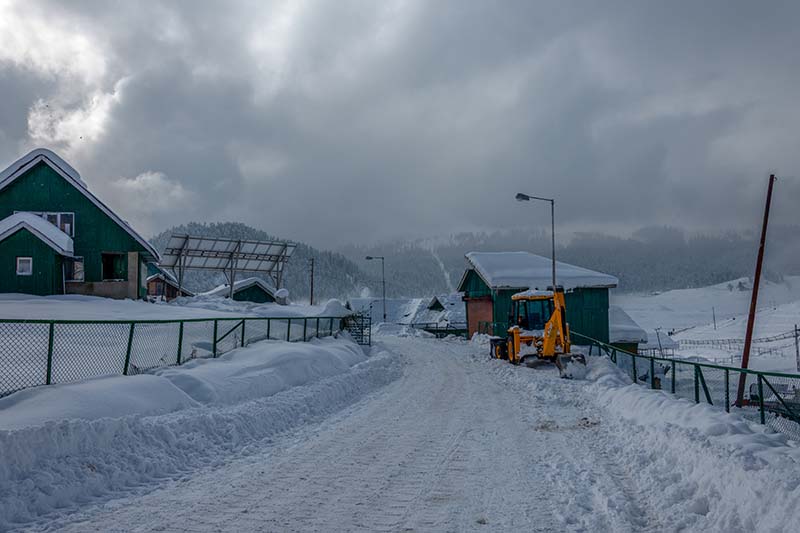 The market area after a snowfall in Gulmarg 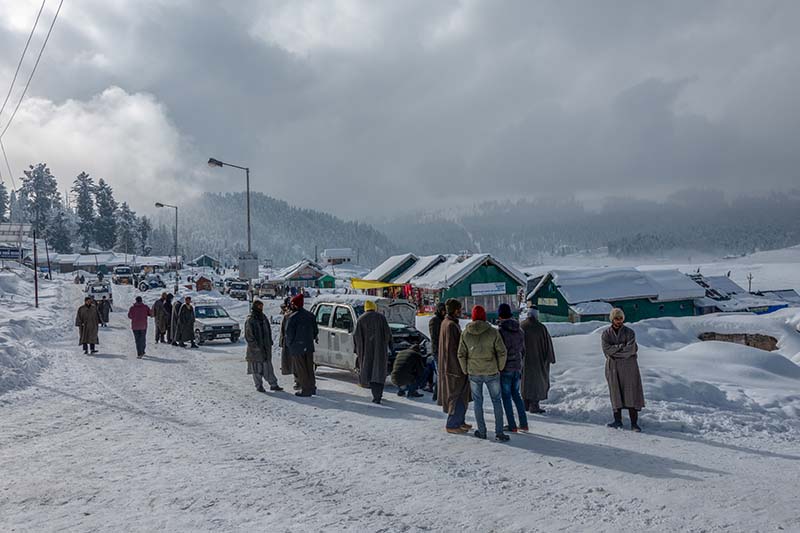 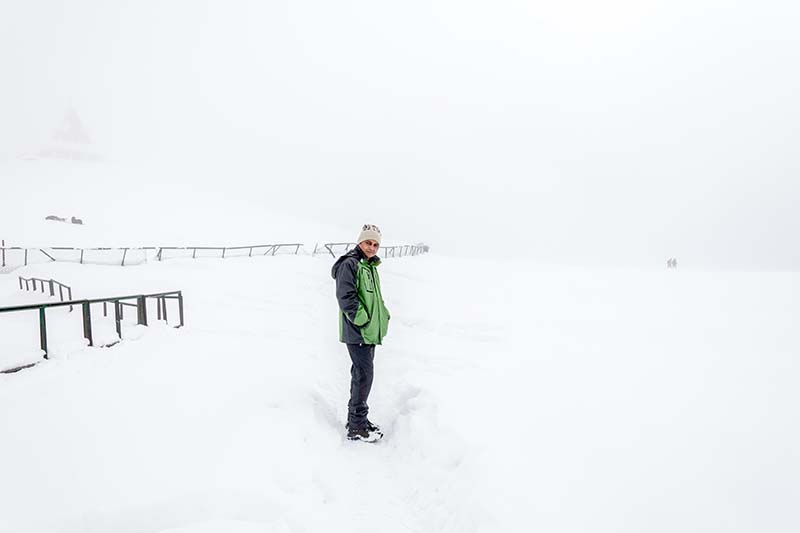 A few puppies playing around in the snow. These little guys made me wonder how they could survive this kind of weather. They even slept in the snow itself. 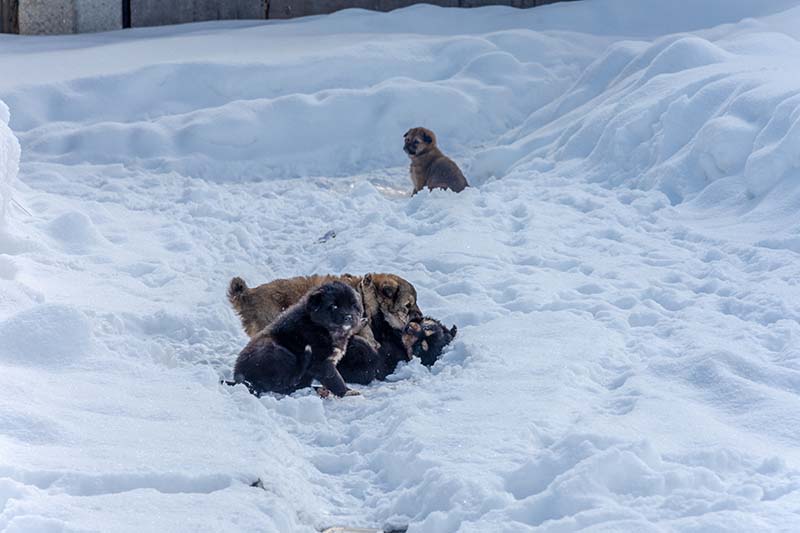 We roamed around for a couple of hours and had lunch at Sohail’s restaurant. The weather continued to remain dicey and then once again turned bad. It started to snow and visibility reduced to like below. 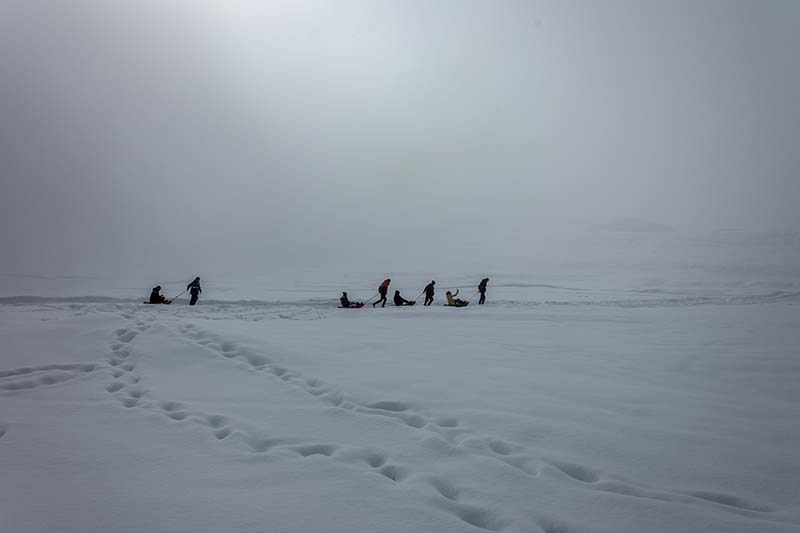 All the walking around in the snow took a toll on my cousin’s shoes. I was wearing Provogue Boots and they served the purpose well.

My cousin on the other hand was wearing normal Puma Sports shoes which did not last even 2 days there.

Elfy to the Rescue

Our original plan was to rent boots in Gulmarg but seeing that our shoes were doing fine until now, we chose to forget about renting boots. But on the third day, my cousin’s shoes could not take the snow and wetness anymore and the soles of both the shoes came off.

It was just the sole that came off but the rest of the shoe was fine. There was no shoe repair guy available in the entire Gulmarg so we just had one choice. Buy glue, like Feviquick, and make it work for the next two days.

We asked around at a few shops. Feviquick wasn’t available anywhere but we did find a similar glue called Elfy.

We returned to our hotel and the first task was to glue the soles of my cousin’s shoes back. Fortunately, it worked and we did manage to put the soles back in place.

Once that was done, we spent the rest of the day mostly watching TV. It stopped snowing towards late afternoon again and we decided to build ourselves an ugly and scary snowman. 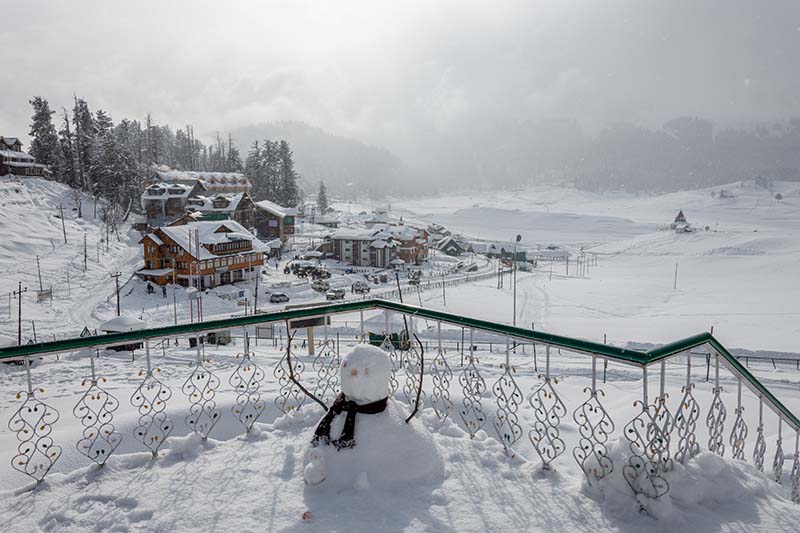 And that’s pretty much all that happened on this particular day. We had dinner at the hotel itself, watched TV, and went to sleep. By evening, it was snowing again and kept getting more intense with each passing hour.

I called the owner to let him know that I will be arriving in Srinagar tomorrow. He in the turn told me that the hotel was closed due to renovation work but agreed to open one room for our stay.

With that arrangement done, we both went back to sleep. This was our last night in Gulmarg which kind of made me a little sad really.

Even though we did not do much today and stayed indoors for the most part of the day, I really hoped that we could stay for one more day and enjoy the snowy views.

Little did I know that my wish was going to come true the next day. Please click on the link above to continue reading the next part of the travelogue.

I hope the travelogue, pictures, and information on snowfall in Gulmarg were of help. If you have any questions, please feel free to ask in the comments section below. You can also follow me on Instagram and chat with me live or subscribe to my YouTube channel and ask a question there.

Thank you for sharing your experience. Your blog is a very helpful to everyone. Can you please tell me your date of visit to Gulnmarg. Thank you once again.