“Expensive hobby” were the words of a friend to me 10 years ago when I had just bought my first DSLR; and then went to Chandni Chowk in Delhi to buy some filters. I did not think of his words much but in last 10 years, I must admit that what he said came out to be true. What started out as a mere hobby once has now grown into a passion for me. I bought a few different cameras and lenses in last 10 years and the latest is a Nikon D7200 that I just brought home today. Funny thing is that after spending so much money on a camera in a single evening; I already know what will my next camera and expense would be. LOL.

As far as the memory goes, I always had a thing for photography. Back then, when I was in school, I used to save money to buy film for an old Kodak camera that I had borrowed from my uncle. Clicking photographs; getting them developed and printed and then showing the albums to family and friends really used to make me happy. My father then bought me a new Kodak camera and I used to go around clicking pictures everywhere with it. During college however, this hobby died and I don’t think I clicked even a single photo at that time. I still had my Kodak camera but it was just lying eating dust somewhere.

I passed out of college, started working and then it was a trip to McLeodganj that changed everything for me. It was this trip that started the whole “traveling and blogging about it” thing; but more than that, it reignited the passion for photography once again. I started to go out on frequent trips and to serve my photography needs, I bought a Kodak point and shoot first. A friend of mine was actually visiting USA at that time and I asked him to bring it all the way from Florida.

I still have that Kodak Point n Shoot but back then, I realized how limited my options were with that small camera in my hands. To be honest, it actually was just the Zoom factor. I was very eager on zooming in the snow covered peaks of distant mountains; which was not possible with my point n shoot. And hence, I started to consider buying a DSLR.

I had zero knowledge of photography back then. I did not know what aperture, ISO, depth of field or any other photography term was. All I thought was that a DSLR has great zoom capabilities; and that is why they attach a separate lens to it; like a telescope. That is how ignorant I was. After much research, I narrowed down to buying a Nikon D40 which was the best entry level camera of its time. But then Nikon D60 caught my eye which was an upgraded version of D40 with slightly higher price. So I decided to go for a D60. Once again, a friend was in the states at that time and I asked him to bring it over from USA.

Life of D60 however was short and I ended up losing it at sea in a freak incident at Goa in just a few months. For a long time then, I was without a DSLR and was happy with my Kodak Point n Shoot. By then I had learnt a bit about photography so the next camera I bought was a Nikon D7000 in 2012. For the next 6 years , I literally abused my D7000 on several bike trips and used it in every way possible. Now I was started to realize that the camera was getting old and beaten and image quality was starting to get compromised. I can’t really blame it considering the way and conditions that I used it in. So it was time for a new camera and this time, I bought home a Nikon D7200. 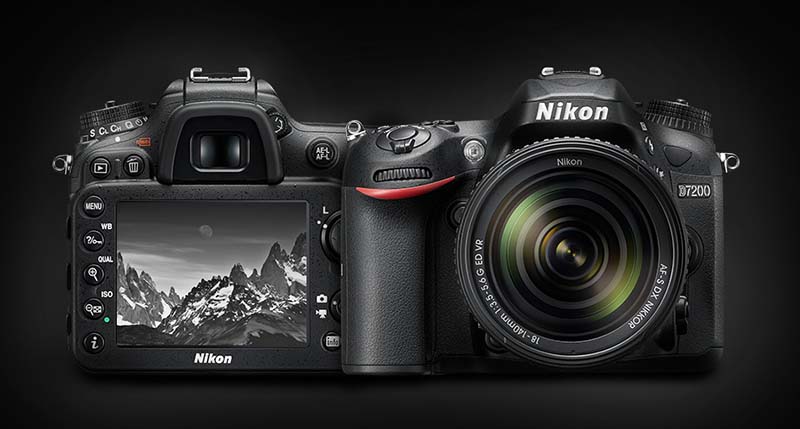 My mind was actually made up on Nikon D750 full frame. But then after much thought, I bought a crop sensor again. My photography knowledge is not yet to that level; where I will be making full use of a full frame sensor; and I knew that for now, it would be just a waste of money. Budget of course was one of the factors why I had to give up on the idea of D750. The damn thing was costing more than double the money I paid for a D7200.

I am still playing around with my new camera, familiarizing with its functions. Once I have used it for a while and clicked some pictures with it, I will post a detailed review. Price that I paid for the camera at a local dealer was Rs. 68,000 with a 18-105 lens. I have a trip to Kashmir coming up in next 2 weeks; so I am very excited about using my new camera there. So far, from all the review I have read over the web; Nikon D7200 looks like a hunk of a machine; but I will know better when I have used it myself for a little while.

Congrats on your new camera. Hope to see some amazing clicks soon. All the best.

Congrats for ur new venture

Thanks Sucharita. I am still waiting to see some of your pictures from Ladakh trip though 🙂

Congratulations, Vargis… Would expect loads of super pictures from your frequent trips to the lap of Mother Nature…. All the Best….