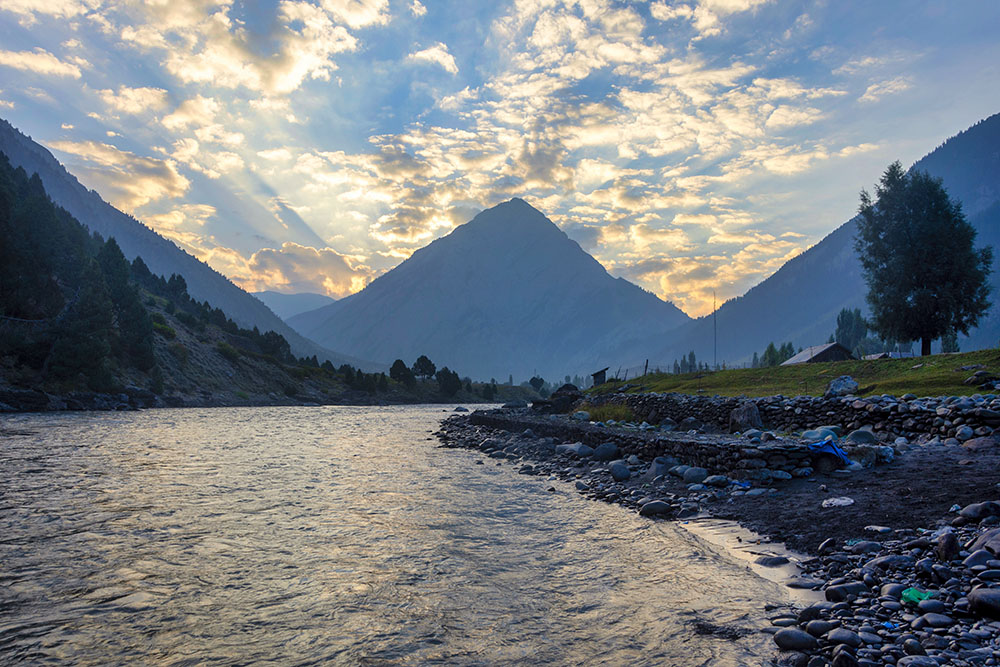 When you plan a trip to Gurez and search for a list of places to visit in the valley, one name that will always be on top of that list is Habba Khatoon peak. But when you visit Gurez, you realize that it is not actually a tourist attraction at all. It is just another mountain among thousands of other Himalayan peaks all around.

There is nothing different about it, and there will be times when you may even get confused about which one is the Habba Khatoon peak. It is just a gigantic mountain, a huge assembly of rock standing tall and overlooking Dawar, the central township of Gurez.

Also Read: How to Plan a Trip to Gurez Valley

So what is it that makes it so special then? It does look pretty at dawn and dusk but then it is not the mountain that is famous. Rather, it is the person that it has been named after who is an important part of Kashmiri history.

The place in the picture above is the amazingly beautiful Gurez valley. In the center, the tall mountain is Habba Khatoon peak. The group of houses on the right is the town of Dawar.

The stream of water is the Kishenganga River. It flows through the Gurez valley before finally merging into the Jhelum River near Muzaffarabad in Pakistan. In Pakistan, it is known as the Neelum River and forms the beautiful Neelum Valley.

Also Read: The Life and Legend of Baba Reshi

So who was Habba Khatoon? She was a 16th century Kashmiri poetess who is also known as the ‘Nightingale of Kashmir’. She was born in 1551 (or 1554) in the small village of Chandhara near Pampore. Her childhood name was Zoon (the Moon) because of her immense beauty.

There are several stories related to her and she is a popular figure in Kashmiri literary history. Her life was a difficult one. She was born a peasant girl and lived in poverty with very little education.

Her first marriage was to a local peasant boy at an early age which ended in divorce soon after. Her husband, an illiterate peasant, could not really understand her and after a few years of a troubled married life, left her.

It was after this divorce that Zoon started to write and sing songs in Kashmiri. The influence she has exerted over the popular imagination had much to do with the difficulties she herself faced in her life.

It is said that Yusuf Shah Chak, who later on went to become the ruler of Kashmir, was out hunting one day when he heard Zoon singing under a Chinar tree. Upon hearing her melancholic melodies, he stopped and went looking for the woman singing in such a beautiful voice.

He found Zoon sitting under a tree and was stunned by her beauty. It was love at first sight for both of them and they decided to get married soon after. After marriage, she changed her name to Habba Khatoon.

Also Read: When is the Best time to Visit Gurez Valley?

For a while, everything was all romantic and dreamy. Yousuf Shah Chak became the king of Kashmir and Habba Khatoon was the queen. But then came Akbar and his conquest of Kashmir.

Chaks were a tribe of fighters from Gurez Valley who continued to rule Kashmir until 1589 AD when it was annexed to the Mughal Empire. They were formidable fighters of huge structure and had successfully resisted the attempts of Babur and Himayun to conquer Kashmir.

When Akbar became the king, Chaks still remained to be a problem for Mughals when they defeated Akbar’s Army twice. This made the Mughal emperor realize that taking Kashmir by force may not be the best way out. As a way out, he invited Yousuf to Delhi for a peaceful resolution.

Habba Khatoon did not like this idea even a bit. She is said to have considerable control over her husband, the king. Sensing Akbar’s offer as bait, she tried to stop Yousuf the best she could.

The king on the other hand knew that their Army will not be able to stand the third attack from Akbar. They have been fighting Mughals for a while but this is as far as it could have gone.

Another attack by Akbar’s Army would have resulted in a massacre of his people on the battlefield. He knew that he was walking into a trap. But he also knew that he has little choice other than to comply with Akbar’s offer.

As Habba Khatoon feared, Yousuf was captured on his arrival in Delhi and imprisoned in Bengal. He was later shifted to Bihar where he died and where his grave remains. Three years later, Akbar conquered Kashmir and annexed it to the Mughal empire with little to no resistance. 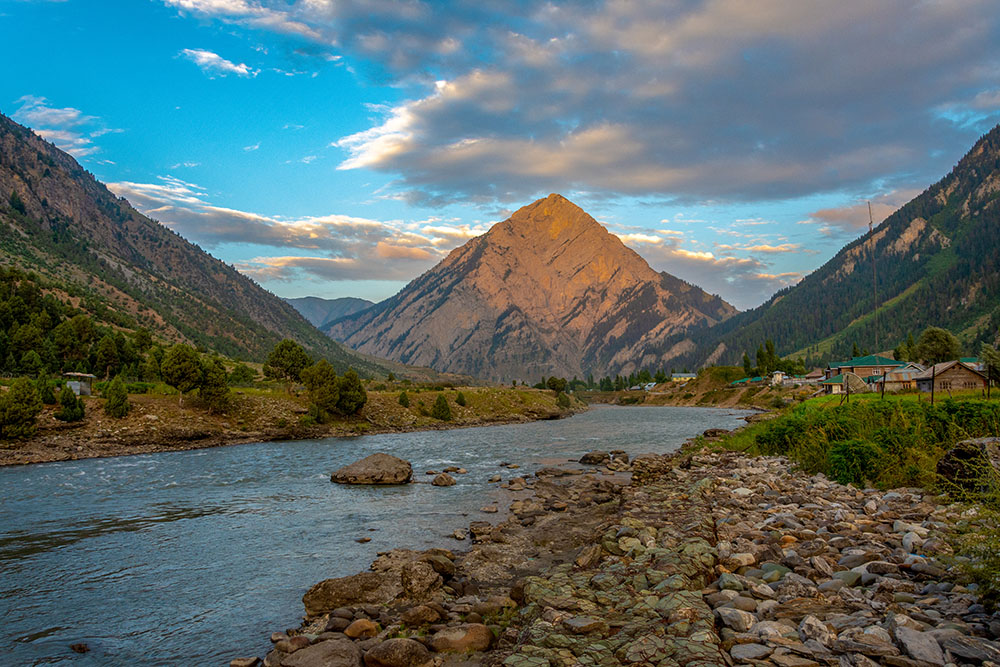 The Poetess & The Ascetic

The day Yousuf left for Delhi was the last that Habba Khatoon saw of her husband. A few days later, the news of Yousuf’s capture came and she never got to be with the love of her life again.

This broke her completely and she took up an ascetic life. All her poems and songs were in memory of her estranged husband, and are so full of sorrow that they will break your heart.

She moved back to Gurez valley and spent most of her remaining life here. She died in 1609 near Athwajan (on Jammu-Srinagar national highway) where her tomb is located to date.

And that was the story of Habba Khatoon. She was a remarkable poetess and is accredited for introducing “lol” to Kashmiri poetry. The word “lol” is equivalent to the English ‘lyric’, conveying a brief thought.

Her lyrics on love and romance still captivate the Kashmiri people. The mighty development in Kashmiri literature during 1500 – 1800 AD is accredited to the works of Habba Khatoon along with several other great poets and poetesses.

There also exists a different version of the story of how she came to be known as Habba Khatoon. It is said that Habba was actually the name of the boy she got married to the first. Upon the suggestion of a saint, got her name changed to Habba Khatoon, after her husband.

But since she spent most of her time in poetry and singing, Habba started to mistreat her. Yousuf who was then the emperor of Kashmir noticed this village girl once. Taken by her beauty, he got her divorced and then married her.

There was also a movie planned on her life starring Dimple Kapadia in the leading role but it was never filmed.

What to See at Habba Khatoon Peak?

As I mentioned, it is just another mountain. But the way it is located is quite remarkable. It stands all alone, a bit away from the other peaks, towering over the town of Dawar.

The peak is visible from everywhere in Dawar. The best time to view it is either at the time of sunrise or at the sunset. It looks quite beautiful as the rays of either the rising or the setting sun hit it.

The first picture I posted in this article was taken at the time of sunrise. The second picture I clicked was during sunset from the same spot. As you can see, both the times, the peak turns a bit golden and looks quite beautiful.

There is a small stream of underground water that emerges from Habba Khatoon peak. Locally, it is known as ‘Habba Khatoon ka Chashma’. The water comes out of the mountain and flows down for a few meters into the Kishanganga river.

There are two unique things about this water stream. The first one is that it is possible the coldest flowing water I have ever touched. It is really very cold.

The second is that the water is quite refreshing. I know water doesn’t have a taste of its own but the way the water of this stream feels in your mouth is really amazing. Try it out when you are there. 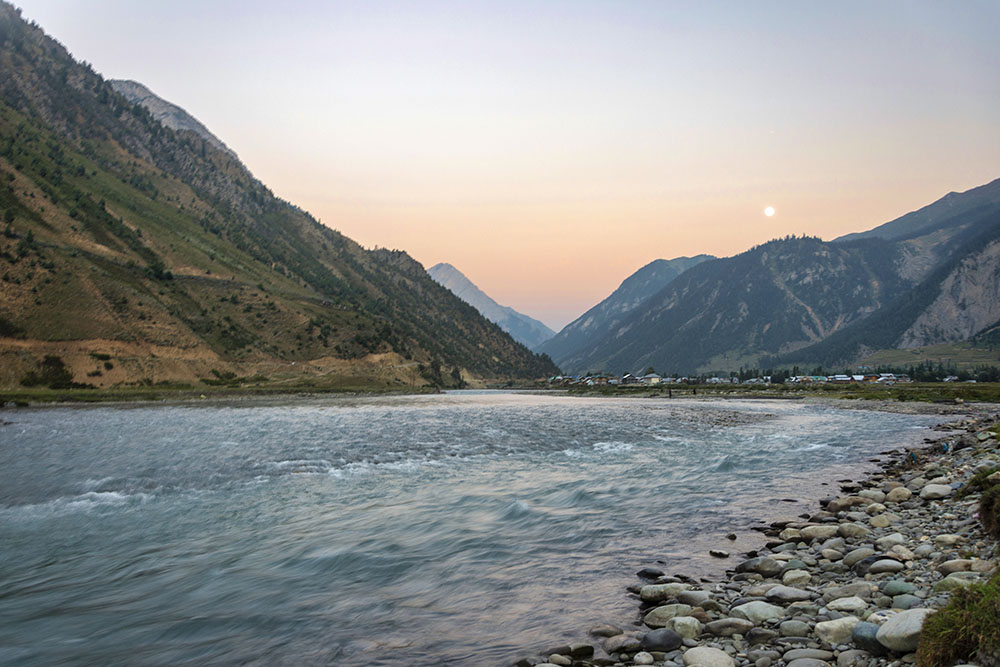 So when you are standing in Dawar in Gurez valley and you look up to this huge and enormous mountain, do not just see a pile of rocks. Remember the woman that it has been named after.

Habba Khatoon – a poetess, a queen, and most of all, a woman who lived her entire life wandering the valleys of Kashmir in memory of her lover. It is in fact said that she still wanders around this mountain here in Gurez valley, still searching for the one she so deeply loved.

I hope the information above on the Habba Khatoon Peak in Gurez Valley was of help. If you have any questions, please feel free to ask in the comments section below. You can also follow me on Instagram and chat with me live there or subscribe to my YouTube channel and ask a question there.

Thank you for taking the time to pen down the story of Habba Khatoon… Somehow makes me want to visit Gurez and experience the mountain in all it’s glory!

Very interesting. I actually got transported to a different era while reading this. Please share some more details of Habba Khatoon , her life and poetry