After relocating to a new city due to job change, a lot of things changed for me. I had spent six years of my life in Delhi-Noida and was familiar with every nook and corner of the town. Suddenly everything around me changed, and now I was in Bangalore, the third-largest IT hub in the world. And that is how my bike trip to Wayanad from Bangalore happened.

Bangalore is also known as the “Silicon Valley of India” for its role in the software industry globally. Although things around me changed, one thing never changed, which was a quest to explore more of India. Once settled in the new city, it was time for me to start exploring the southern part of the country, and what could have been a better place to start other than Kerala?

Kerala is one of the most visited states in India; and it is also known as “God’s Own Country.” The state is famous for its hills, architectural masterpiece, backwaters, and culture. Another reason for selecting Kerala was its easy accessibility from Bangalore; as the Karnataka-Kerala Border is only 200 kilometers from Bangalore. Once the state was finalized, I had to determine which location in Kerala I should explore.

The first reason I decided to visit Wayanad was for its proximity to Bangalore. Another reason was the option of multiple tourist destinations, i.e., Bandipur National Park and Udagamandalam (also known as Ooty). Therefore in this article, I will be sharing my bike ride to Wayanad from Bangalore.

I will also be sharing the places I covered during my entire journey and hope this will be helpful for anyone planning a trip to Wayanad.

Where Is Wayanad Situated?

As mentioned in the beginning, Wayanad is a district in the Indian state of Kerala, and it is one of the 14 districts of the state. Wayanad lies in the foothills of the Western Ghats of India, and the average elevation of the district varies between 700 to 2100 meters above sea level. It lies in the northern part of Kerala, forming a state border with Karnataka and Tamil Nadu.

The distance of Wayanad from some prominent places is:

Why to Visit Wayanad?

Although there is no explanation for visiting a place yet, there are many reasons for one to visit Wayanad. As the district lies in the Western Ghats of India, it has a wide variety of flora and fauna.

The Western Ghats of India is one of the eight “hottest hot-spots” of biological diversity in the world, and it is apparent in Wayanad too. While the state has fertile plains for rice cultivation at the same time, the highest peak shoots up to 2100 meters above sea level.

The state is blessed with many rivers, and they form several lakes attracting tourists. It is also famous for its rich cultural heritage and temples. Edakkal Caves and Thirunelli Temple depicts the rich history and cultural amalgamation of the state.

The route also has some of the tourist attractions like Mysore Palace and Bandipur National Park, making Wayanad a perfect tourist destination.

How to Reach Wayanad

Since Wayanad is located close to some of the prominent and significant cities of South-India, arriving in Wayanad is not a challenge.

As the majority of the district is underhill covers, the possibility of a rail route is less. The nearest railway station is Kozhikode Railway station, which is 80 kilometers from Wayanad.

Places Covered During My Bike Ride to Wayanad

Bike Trip To Wayanad from Bangalore

After finalizing the destination, the next big question was for how many days the trip should be. I decided to keep the journey for three days and informed my friend working in Chennai, and he agreed to join me on the trip. With everything in place, I was all set to explore my first tourist destination in south India and Kerala. 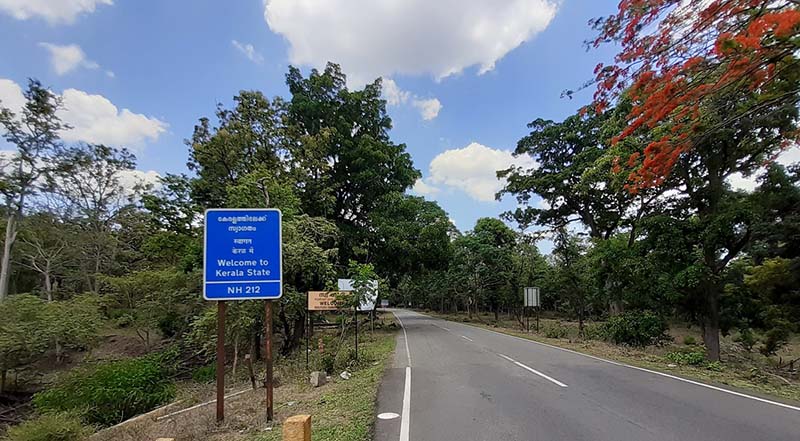 The NICE highway is a six-lane access-controlled highway built to connect Bangalore city to the smaller towns on the outskirts of Bangalore. I have ridden on some of the best roads in India like the Delhi-Udhampur, Delhi-Agra, and Agra-Lucknow, and the NICE highway is no less than any other highways mentioned above. It took us 5 hours to reach Mysore, and in-between, we took two breaks, one for breakfast and another to straighten our backbone.

Once we reached Mysore, we had to take the by-pass to skip the city traffic. Although I was more interested in exploring Wayanad and less in Mysore, we skipped the by-pass road and entered into the Mysore city to get a glimpse of Mysore Palace. 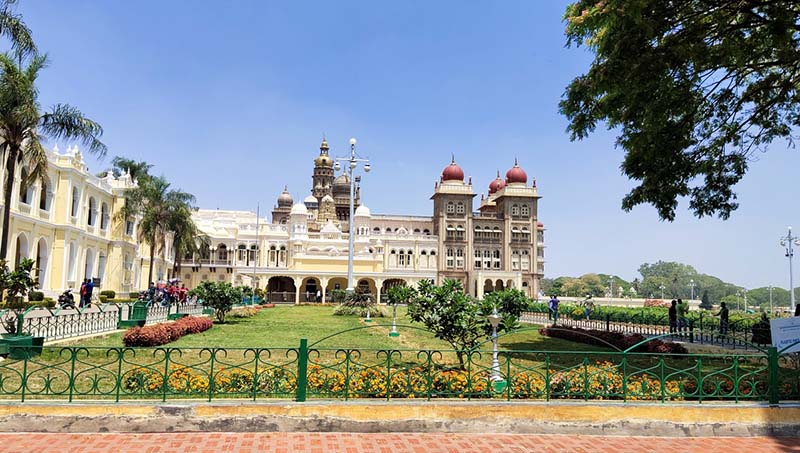 After spending 15 minutes outside the Mysore Palace, we decided to move on as we had to reach Wayanad by evening. It took us another forty minutes to cross the bustling roads of the Mysore city, and once we crossed the city, the ride became smoother.

From Mysore, there are two routes to reach Wayanad. The smaller road goes through the State Highway. We took the Bandipur National Park route as I had read a lot about this park.

The Bandipur National Park hosts the second highest tiger population in India. At the same time, it is the largest habitat of wild elephants in South Asia as well as in southern India.

One thing to keep in mind is that the road passing through the Bandipur National Park remains closed from 6:00 PM to 6:00 Am. The reason is to avoid human conflict with wild animals. As we are on time, we didn’t have to bother about the road closure, and once we reached the police barricading at Maddur, we knew that we are inside the national park. 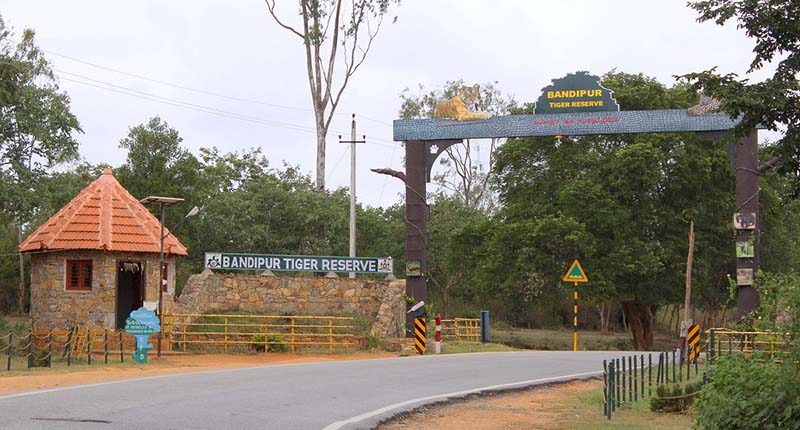 After a few formalities, we started riding through the forest, and it was the first time in the entire day when I loved riding on the road. A day-long frustration of riding a bike in heat and dust, all eased out in a second. The route is a single laned road, and the forest department has built small speed breakers to prohibit drivers from driving fast.

We were in no hurry and instead rode at the slowest possible speed we could. It took us one hour to cross the Bandipur National Park, but it was the best leg of our ride in the entire day. 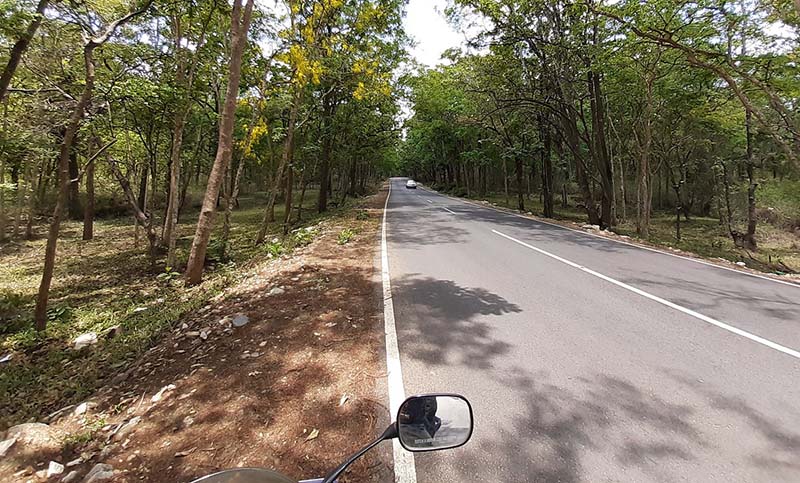 Although we didn’t encounter a tiger or elephant, we got a glimpse of deers and other small animals. Once we crossed the park, Wayanad was only 40 kilometers more and it took us an hour more to reach there. Upon arriving in Wayanad, we quickly found accommodation near Sultan Bathery and concluded the first day of our ride to Wayanad.

The next day we started early in the morning, and our first place to visit was the Edakkal Caves, followed by the Phantom Rock. In the evening, we deiced to explore some of the famous waterfalls of Wayanad like Soochippara Falls and Meenmutty Waterfalls. We decided to visit the Banasura Sagar Dam and Thirunelli Temple on the last day of our trip.

Edakkal Cave was only 10 kilometers from the hotel we were staying; and it took us hardly 20 minutes to reach there.

Edakkal Caves are a set of two natural caves situated at the height of 1,200 m (3,900 ft.) above sea level. The caves are famous for their walls, which contain a collection of Neolithic rock engravings and images. As per the studies, these images were engraved during the late Neolithic period. 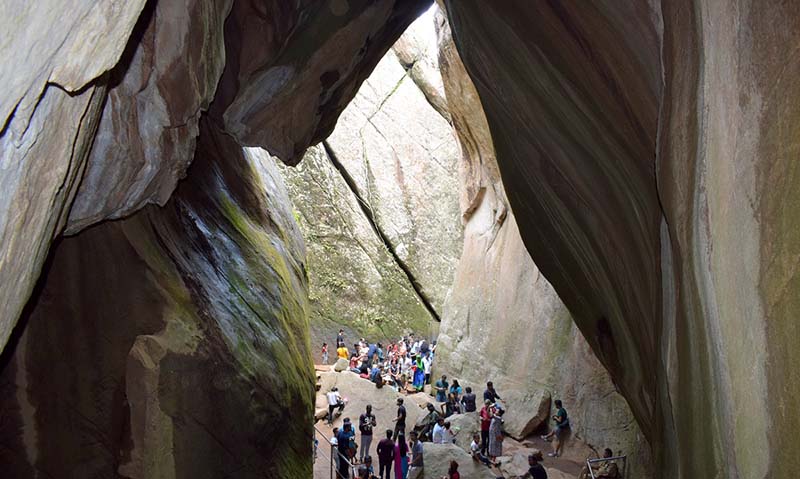 Once we reached there, we headed straight to the ticket counter and purchased the ticket. As the cave lies at an elevation of 1200 meters, a hike is mandatory, and the state tourism department has built iron stairs to facilitate the same. We took 30 minutes to reach the entrance gate of the cave. The markings on the wall looked like the writing of ancient Pharaohs.

Whenever I visit places with historical importance, I feel a sense of pride for belonging to a country with such a long and rich history. While Edakkal Cave was splendid, I was annoyed by the crowd as they created unwanted noise and chaos. I also noticed a greener mountain range from Eddakal Cave, and although I am not sure, my intuition said that it should be the Chembra Peak, the highest point in Wayanad. 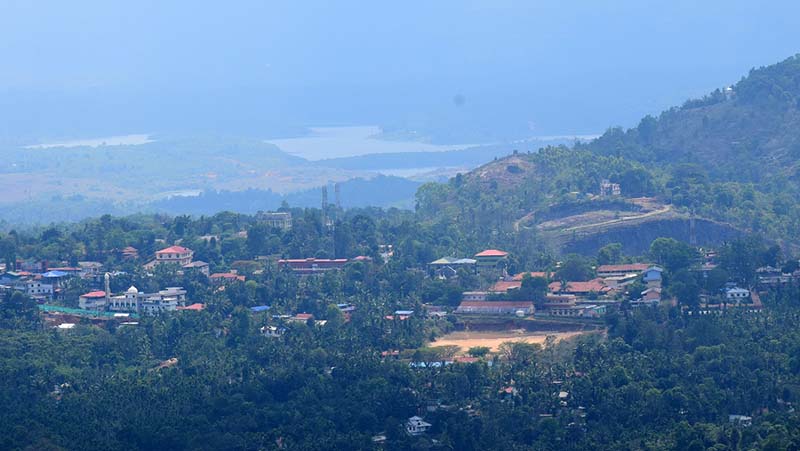 After spending a reasonable amount of time, we decided to head back to Phantom Rock, our next destination.

Phantom Rock is only six kilometers from the Eddakal caves; and we reached there in the next ten minutes. It is a natural metamorphic rock formation that resembles a human body with a distinctive head and body.

I didn’t find the Phantom Rock appealing as I had seen some best rock formation and stories on my Bamboo Trek in Meghalaya and therefore decided to proceed to the next destination.

The prominent waterfalls to explore in Wayanad are Meenmutty Waterfalls and Soochipara Falls. We decided to ride for Soochipara Falls, hoping we will also see home hills and greenery of Wayanad.

The restaurant where we had lunch, his owner informed us that since it is summertime (we were traveling in March), most of the waterfalls are either dried up or have very little water. It was terrible news for us and a heavy toll on our trip. Yet we decided to try our luck and drove to the Soochipara Falls. 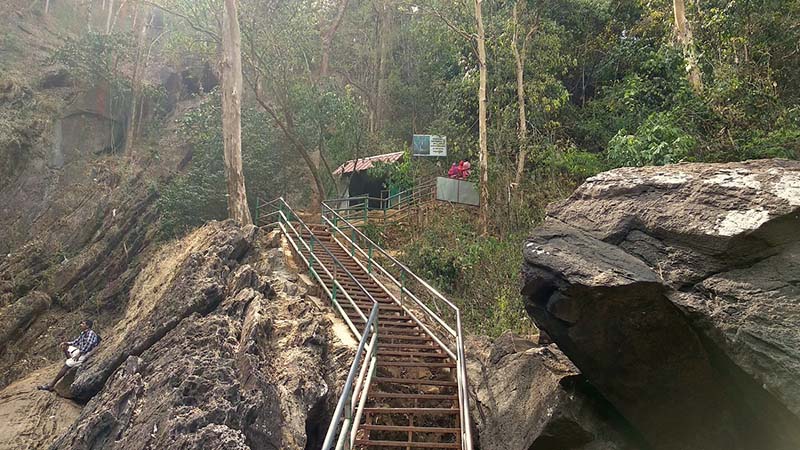 Soochipara Fall is a plunge waterfall, and although I have seen some of the best waterfalls of India during my trip to North-East India, I will say I wasn’t disappointed with the Soochipara Falls. The waterfall has less water, but the walk and nearby scenery made our evening ride memorable. We clicked a few photos and enjoyed the ambiance before deciding to return.

To reach the barrier and reservoir, one has to park their vehicle and use a shared taxi service; which costs 40 rupees per person. The Banasura Sagar Dam is the largest earth dam in India and the second largest in Asia; and it was evident from its reservoir. 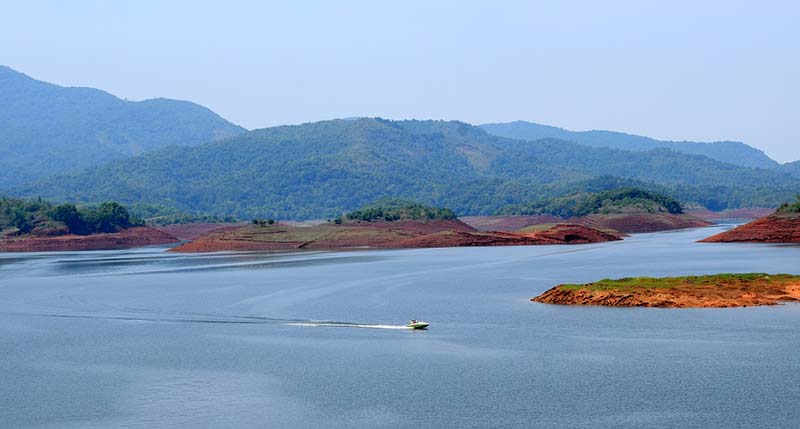 The bluish water of the lake created a stark contrast with the surrounding greenish forest. All the distress of yesterday’s visit to Karapuzha Dam was compensated by visiting the Banasura Sagar dam. We spent two hours clicking phots and walking over the dam. There are several adventure activities organized near the dam, like rock climbing and zipline. Once satisfied, we deiced to ride for our last destination, which was the Thirunelli Temple.

The Thirunelli Temple is located 40 kilometers from Banasura Sagar Dam on the Wayanad-Bangalore road via Nagarhole National Park. It was a suitable option for us as we rode through Bandipur while coming and Nagarhole while returning.

One more hour of ride and we finally reached the Thirunelli Temple. The Thirunelli temple has a unique architecture, and its location is the main reason for its attraction. The temple lies amid the hills and route passes through the remote villages of the Wayanad district.

Surrounded by the Brahmagiri hill, the temple is dedicated to Lord Mahavishnu (Supreme deity). We went inside the temple and prayed for our successful return to Bangalore and, at the same time, thanked for a hassle-free trip. By 2 PM, we had covered most of the places and with nothing more to do, we decided to return. 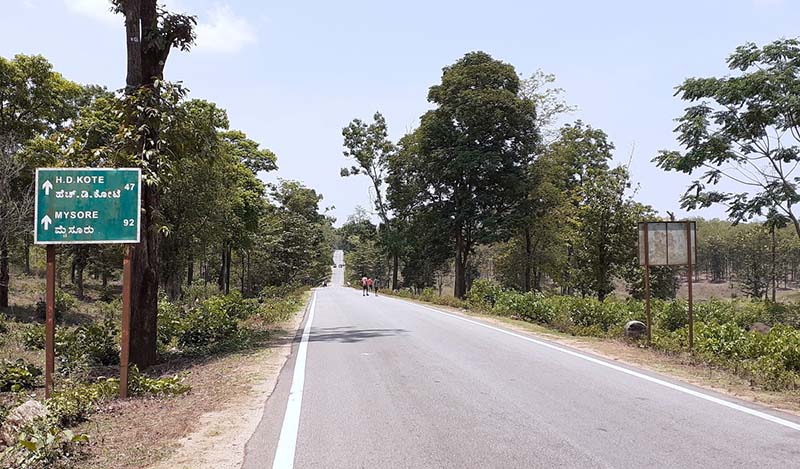 I hope the travelogue and information above on a bike trip from Bangalore to Wayanad was of help. If you have any questions, or need any other details; please feel free to ask in the comments section below; or at our Community Forum; and I will be glad to answer.

A History & Geography Lover and part-time travel enthusiast. An IT professional by job and in free time love to explore India on a motorcycle or watch documentaries. I manage my blog Knowledge of India, where I blog whenever I get free time.

Places to Visit in Vijayapura – Sightseeing in...