Best View of Kanchenjunga from Sikkim – Bermiok and Kaluk

This post is in continuation with a previous one and a part of my Sikkim travelogue. We reached New Jalpaiguri from Delhi by train and then spent the next 5 days exploring Ravangla, Borong, Uttarey, Kaluk, and Bermiok. On the 8th Day of the trip, I finally got what I had been craving for ever since the start of the trip, the best view of Kanchenjunga from Sikkim, details of which are described in the post below.

Of all things that have fascinated me since I was a child, mountains, especially the snow-capped peaks, are probably the most important. There’s something about them, some inexplicable majesty in them that has always agitated me to travel to their laps.

The view of the snow peaks dwarfing the others; the undulating layers of dark vegetated mountains that were not fortunate enough to feel the snow on their torsos, that make the white massifs tower beyond an unimaginable height, the sheer view of them standing tall clad in perpetual snow has always rendered a feeling that I can’t state in words.

An unworldly yearn to drink them with my eyes, a restlessness to see them over and over again has always paralyzed me. While all massifs have beauties of their own, she, for yet another inexplicable reason has been the most beautiful in my eyes.

The feeling associated with viewing Mt. Kanchenjunga, even in half glory, is known only to someone who has actually experienced it. Its extreme elegance as it stands erect, its stunning looks with the three forks extending up to the summit, and most importantly its mystery which I attribute to her pride about her beauty makes it clearly the most coveted mountain I have ever seen.

It was well dark when I woke up. Without pampering the idea of staying back under the warm blanket for a while longer, I rushed out. I had had enough share of my misery of not seeing her a very long time. Even when I was wandering around her for some time now, she had teased me by not revealing herself.

I knew she understood the intensity of my anticipation. My senses told me that it was THE day. I didn’t want to waste a second and went out to the dining hall.

The first thing that greeted me was a chilly gust of wind. Ignoring it completely, I looked up and speared my eyes thru the darkness. What I saw was what I wanted to see so desperately.

Standing amidst the dark was what looked like a faint silver pyramid. It WAS her. I dilated my pupils as much as I could to engulf her with my eyes. As it started to get clearer, she started becoming more and more prominent. Then came the time when I could sense all over me.

All my emotions seemed to have moved to my throat trying to choke me. My heart raced, and I was possibly trembling in delight. The sun was not up, and the view was spotlessly clear.

The gloom of the previous day was a distant (albeit sweet) memory. The rest of the world vanished. There was only me and her. I don’t know how much extra sense I had developed. But in all probability, I was hallucinating. So ecstatic I was.

I could feel her smiling at me with the thick foliage below; seemingly acting as her extended inviting arms. I could smell the snow on her, and could possibly touch her with my eyes. I could sense that the Sun was up. She, being the queen, wore a crown of ruby, as the sun adorned her summit.

Gradually a stream of molten gold started flowing down her broad shoulders. Her ridges started getting covered with a golden tint. An eruption of colors followed. She dazzled in dresses of all possible shades of red, and ultimately stood clad all orange.

I have never been so mystified in my life. I have never felt so helplessly happy. The silence was ripped by the sound of music rendered by innumerable birds and the gentle flow of an incensed breeze.

Imagine looking at the works of Rembrandt while you hear Beethoven’s fifth symphony in the background, and you didn’t get even a fraction of the audiovisual show nature created that day.

It was bright by now. The colors started to faint from Kanchenjunga. Suddenly an idea of visiting Kaluk possessed me. I was aware that a broader range of peaks was visible from there. I wasted no time in venturing out to catch a shared vehicle to Kaluk.

Luckily, I didn’t have to wait for long and found a jeep bound to Jorethang. The last bend before Kaluk unfolded a long range of mountains. Kanchenjunga loomed against the ultramarine blue sky, comfortably dwarfing her associates.

I roamed like a doped man, insanely clicking photos. Although it was sunny, the avenues were dark and the buzzing insects made it look creepy. What a pleasure it was, watching her in full glory.

I must have lost all sense of time and spent almost 2 hours at Kaluk; just feeding my eyes and my camera’s memory card. My stomach had had enough and revolted. A sudden churn saw me crash land into reality. Within 10 minutes I was in the back seat of a Geyzing bound jeep.

Breakfast was ready by the time I returned. As my stomach fed on the earthly food, my eyes feasted on the unworldly view of a dazzling Mt. Kanchenjunga.

As the day progressed, the clouds started wrapping her up in a blanket. She still had a smile on her face. She promised me to meet again the next day, before disappearing behind the clouds completely.

The rest of the day was as usual – leisurely, although there was another anticipation building. I was about to meet Mithun; a friend with whom I got acquainted on another travel forum. I had interacted innumerable times during the build-up phase of my trip but had never met in person.

Since they were coming from Uttarey and would travel to Chhaya Tal en route, we had enough time for another post-lunch nap. Finally, as Mithun (and his friends with their respective families) arrived, it was an equal delight to meet him in person.

could sense Mithun’s excitement about the trip after seeing his tripod which would put Eiffel Tower to shame. I am sure I’d need a ladder if I wanted to fix my cam on it.

Utpal and Soumya, the other two of the trio were amazing guys too. I heard most of the stories (and a few others too) that Mithun has shared in his trip report live, as we chatted. The evening gave another opportunity of stargazing and looking at the glittering lights on the opposite mountains.

We were to travel back to Kolkata the next day, and I guess the continuous rush of adrenaline since daybreak had taken a toll. It was an amazing day, very high on emotions, and another such morning waited to follow. As I closed my eyes, the entire morning flashed back in my eyes, and the memories of the wonderful morning colored my dreams.

Day 9: Time to say Goodbye: Bermiok to NJP & Back Home

I can, after all these days, still feel the ache in my heart as I write this. A blend of emotions burdened my mind. It was the last day of the trip. So the melancholy of separation was evident.

But it was also the day when I would start the journey towards my home. The place where I grew up and spent most of my life. I was awake (as usual) before daybreak and went out to pay my last tribute of the trip to Mt. Kanchenjunga. It was, just like the previous day; a glorious morning and she stood silhouetted amidst the dreaming darkness.

Mithun and his friends had talked about their disappointment of missing out on the view of K during their tour, the previous evening. I went downstairs to give them a call in case they were asleep. Living up to my expectation though, they were wide awake. I joined them in savoring treats for the last time on this journey.

Below are a few pictures from the trip, not just this day in particular but combined from all days. 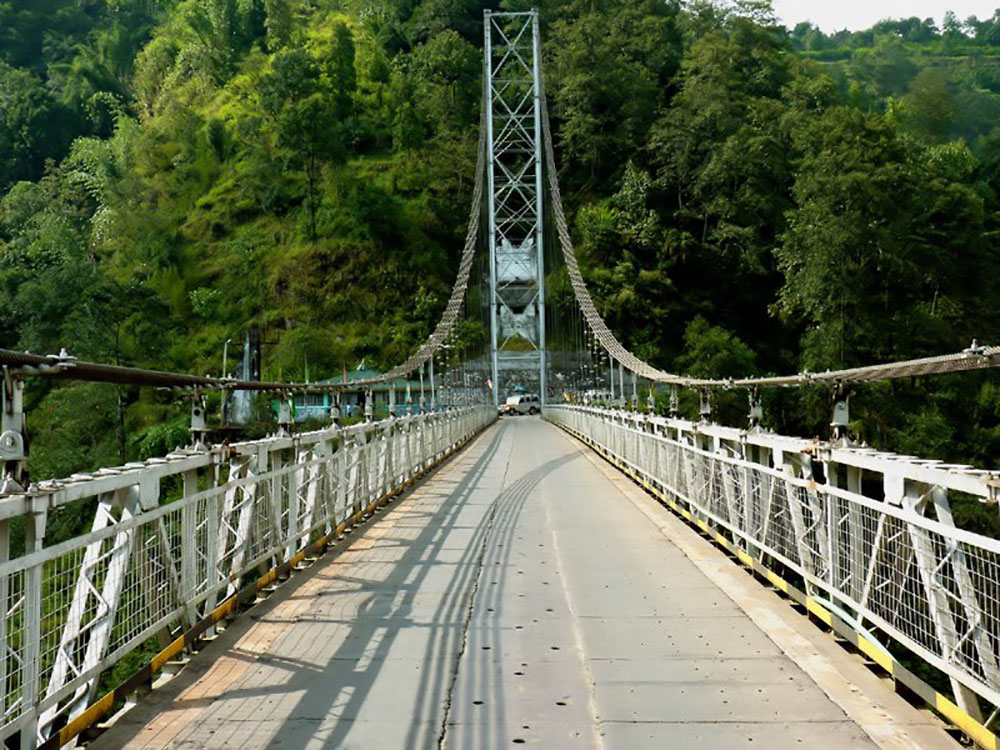 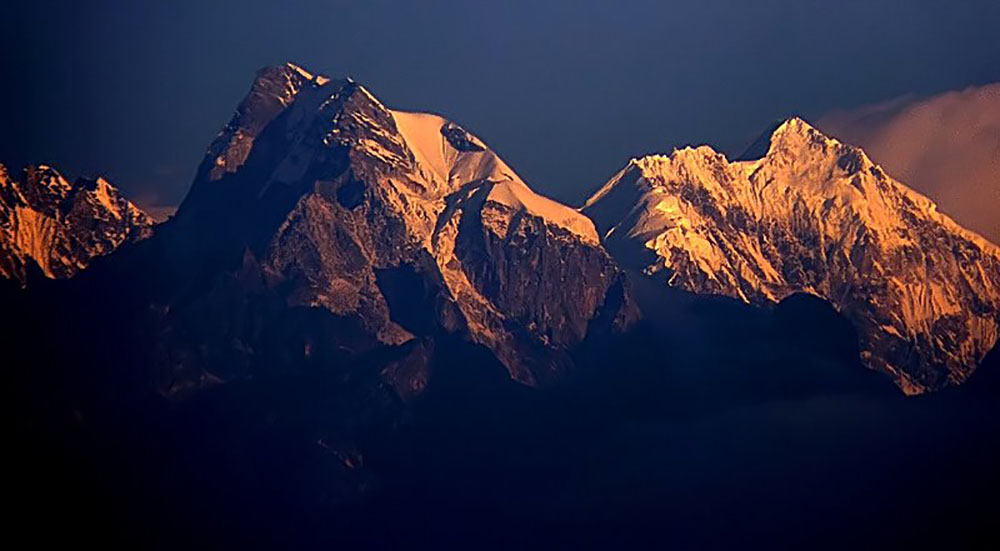 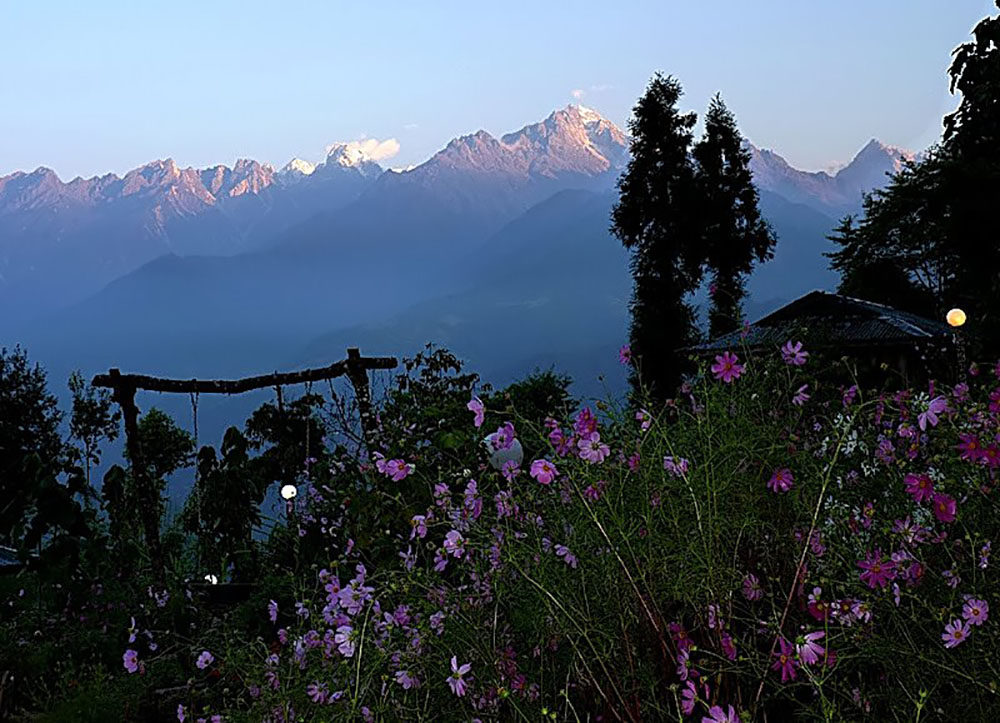 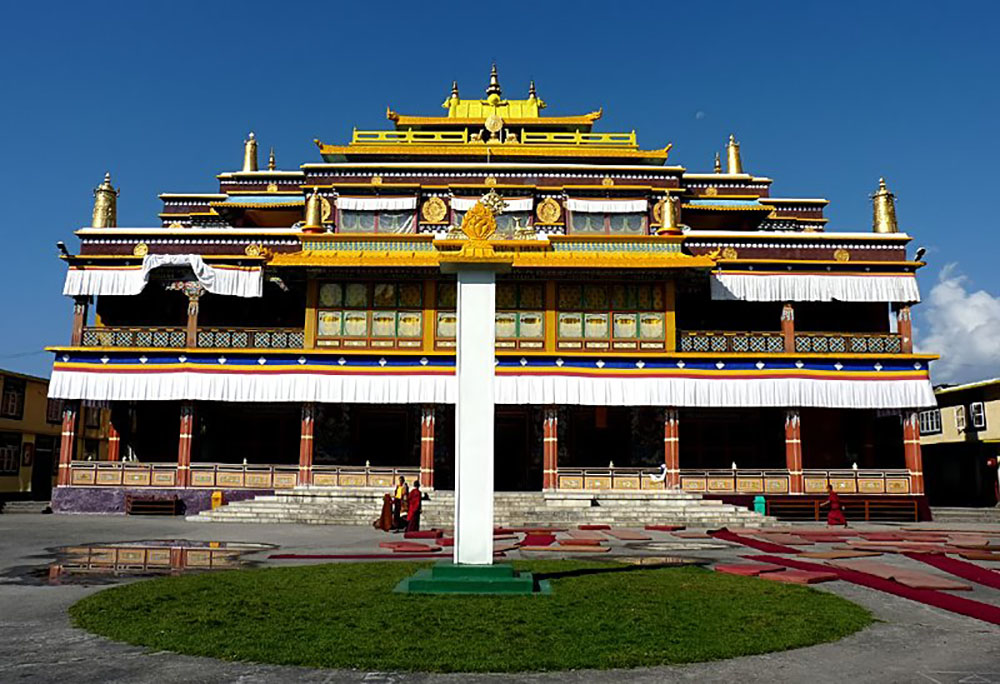 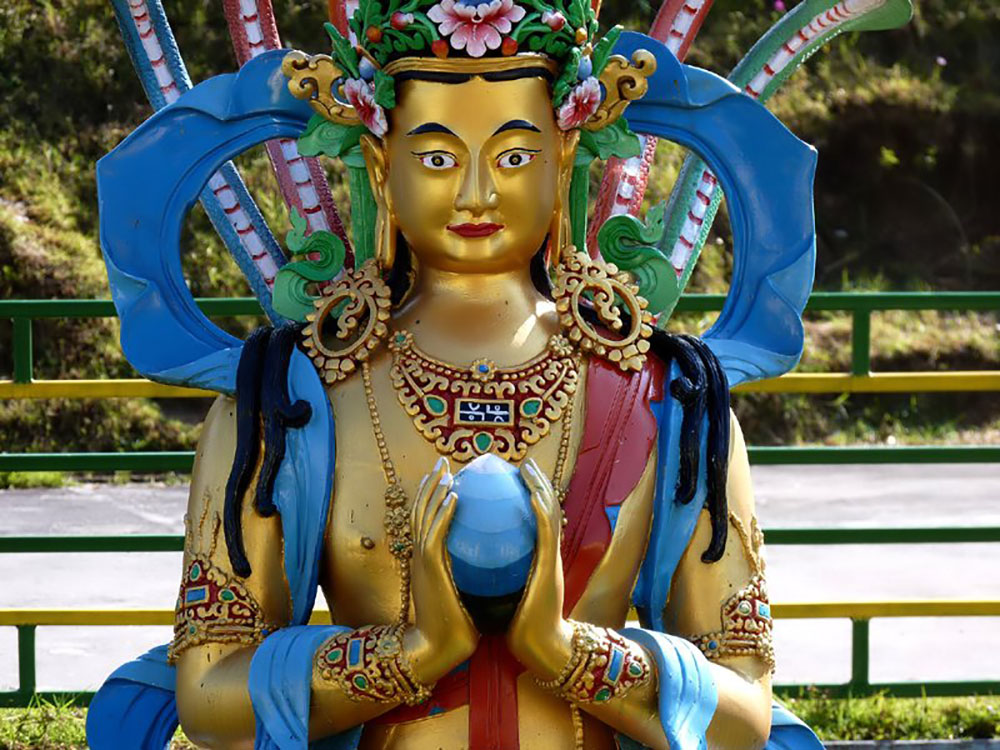 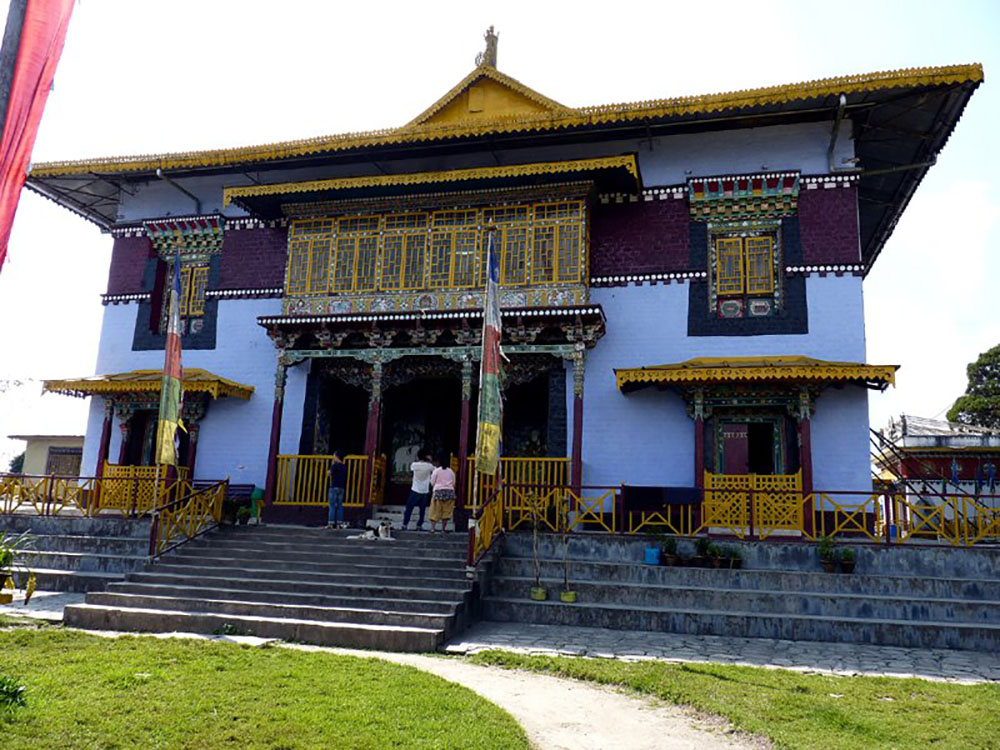 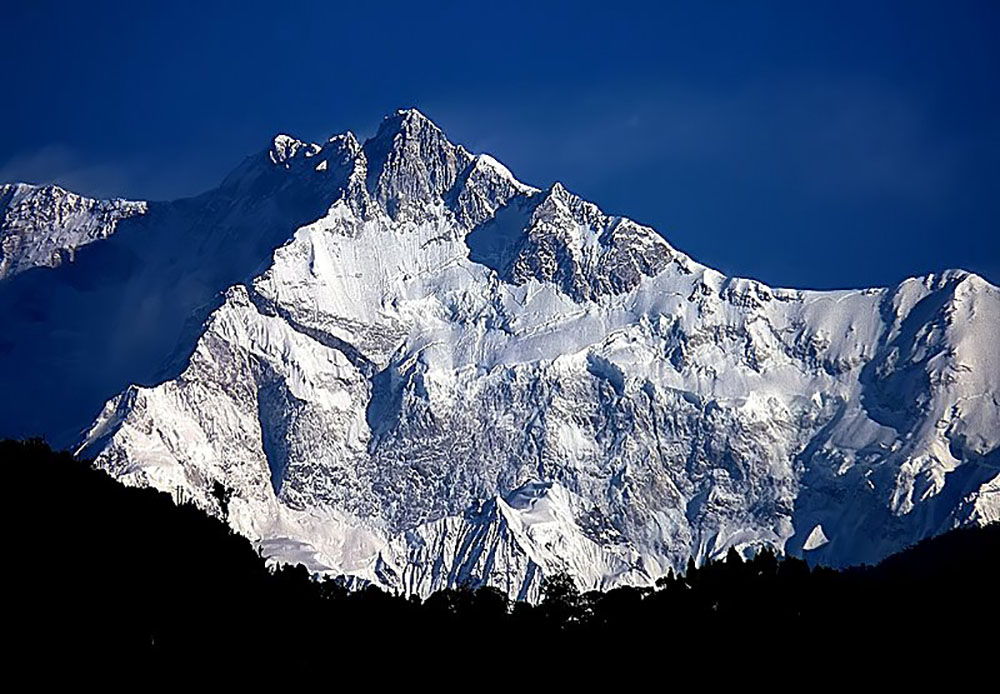 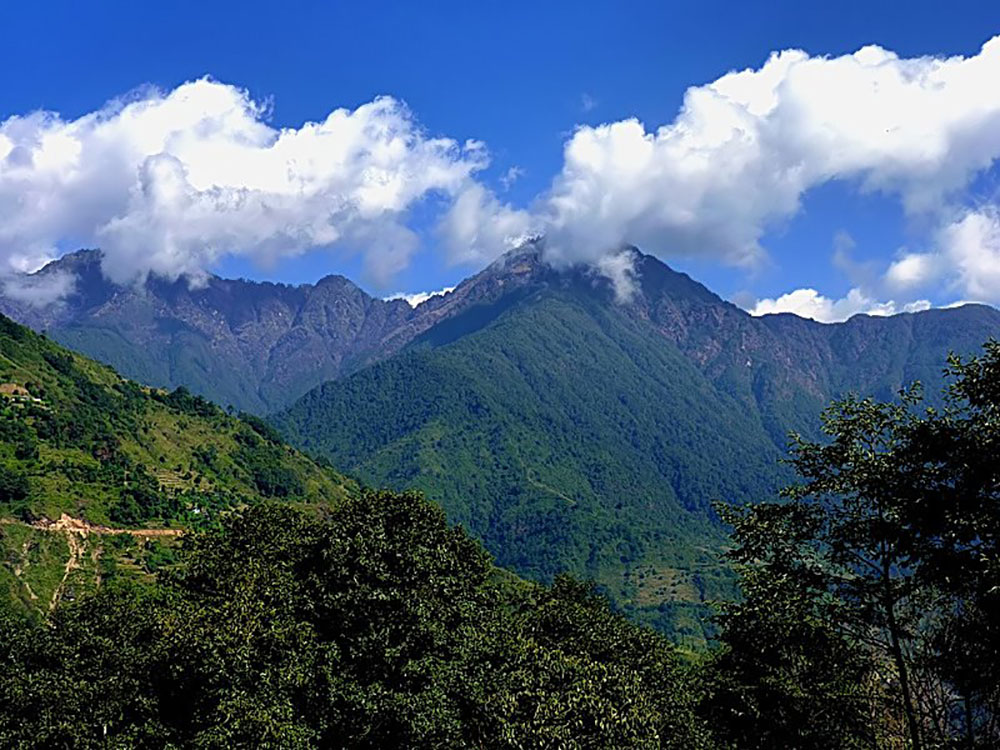 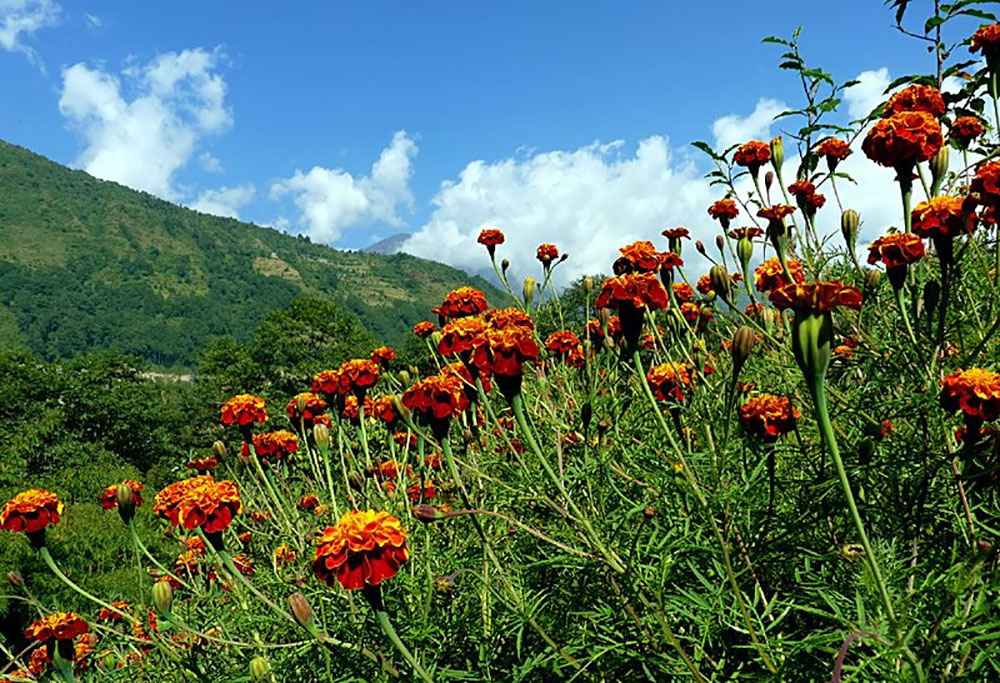 End of the Trip

As the massif stood in all white after sunrise, it was time for us to pack our bags and start our journey towards the plains. Mithun and his friends went for a walk towards Kaluk and we started preparing for departure.

Our car was right on time at 11. The final goodbye to Bermiok and the staff of Silent valley was tough to bid. But every good thing comes to an end at some point in time.

After bidding farewell to the wonderful families of Mithun and his friends, we boarded the car and set off for NJP. Crossing Kaluk brought back memories of the previous day. While we crossed Rinchenpong, I could recollect the wonderful time we had there 5 years ago.

Just before the last turn that would take Mt. Kanchenjunga away from our sight, I turned back and could see a small cluster of grey clouds floating like an umbrella on top of the majestic massif. The car moved on, while she, with all her love, left an invitation to return back to her.

I hope you liked the pictures and the travelogue. If you have any questions about traveling to Sikkim, please feel free to ask in the comments section below or at our Community Forum, and I will be happy to answer.